The Great Wall of WA is a 230 Metres of Rammed Earth Wall, designed by Luigi Rosselli architects, and constitutes the longest rammed earth wall in Australia and – probably – the southern hemisphere.

At 230 metres long, the rammed earth wall meanders along the edge of a sand dune and encloses twelve earth covered residences, created to provide short-term accommodation for a cattle station during mustering season. With their 450mm thick rammed earth facade and the sand dune to their rear and forming their roofs, the residences have the best thermal mass available, making them naturally cool in the subtropical climate. 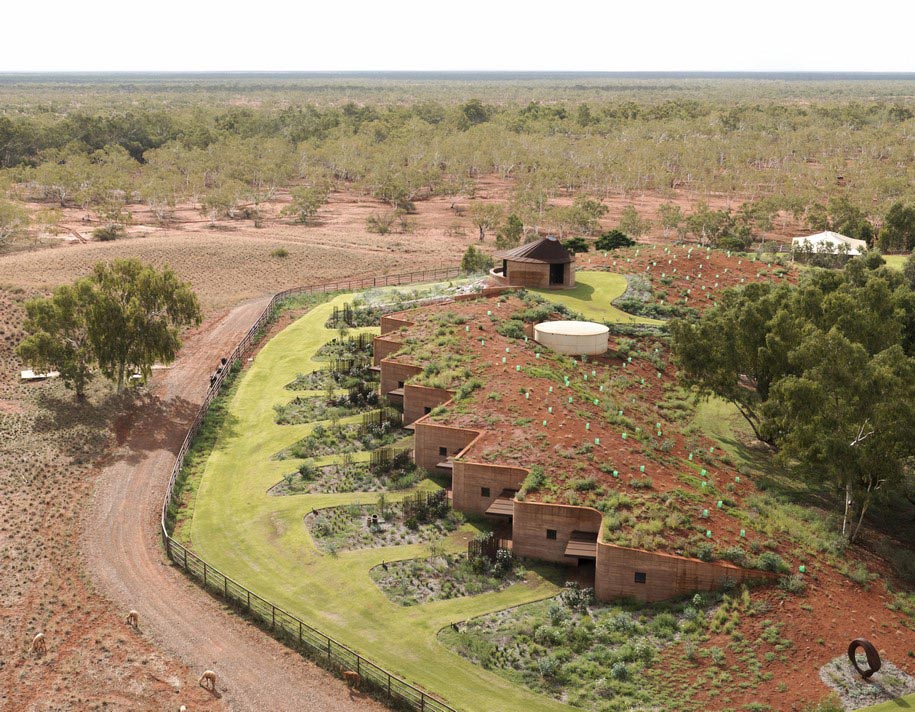 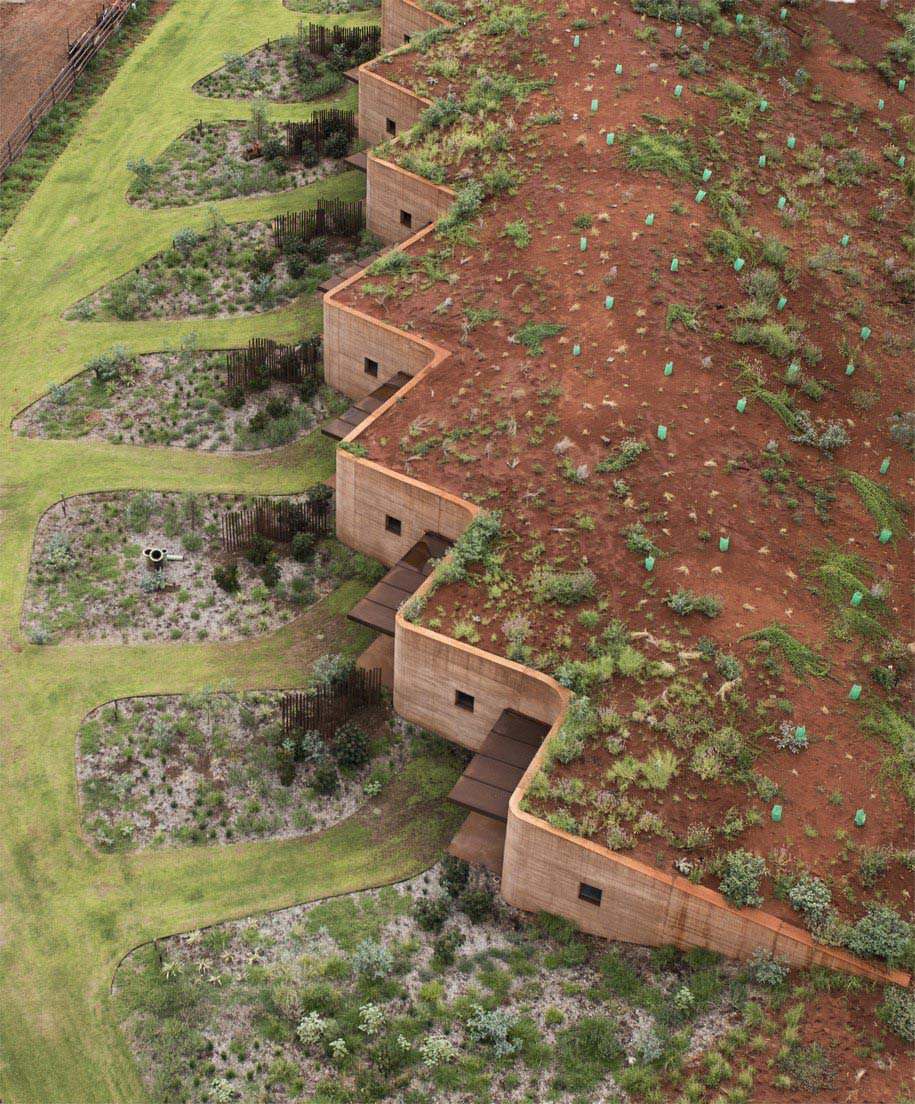 Rammed earth extracted from the local clay pans, pebbles and gravel quarried from the river bed are the palette of materials that blend into the landscape.
The pavilion at the top is the multi-functional hub, meeting room and chapel.

The Great Wall of WA, a rammed earth wall (construction), is composed of the iron rich, sandy clay that is a dominant feature of the site, gravel obtained from the adjacent river and (bonded with) water from the local bore (hole). 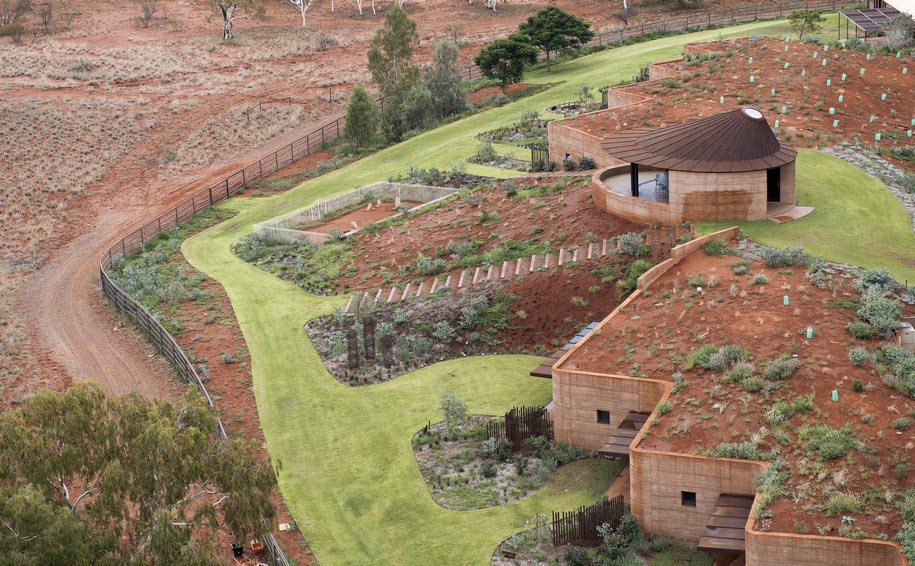 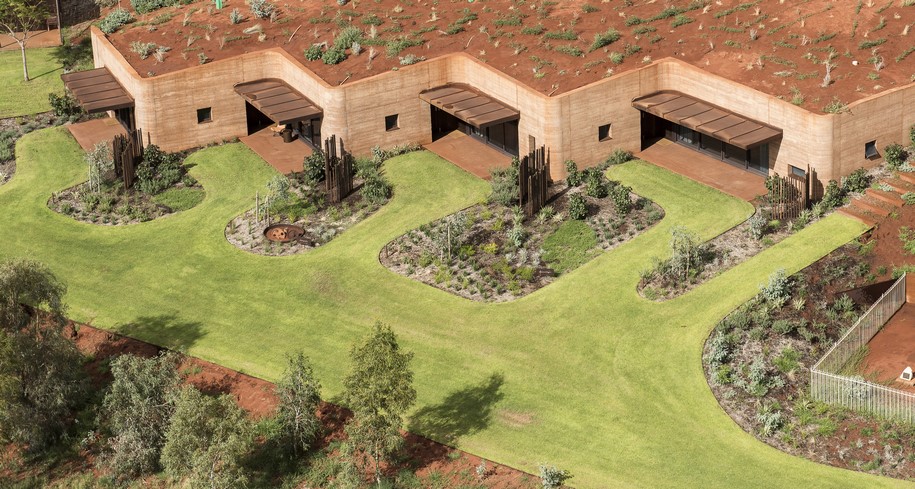 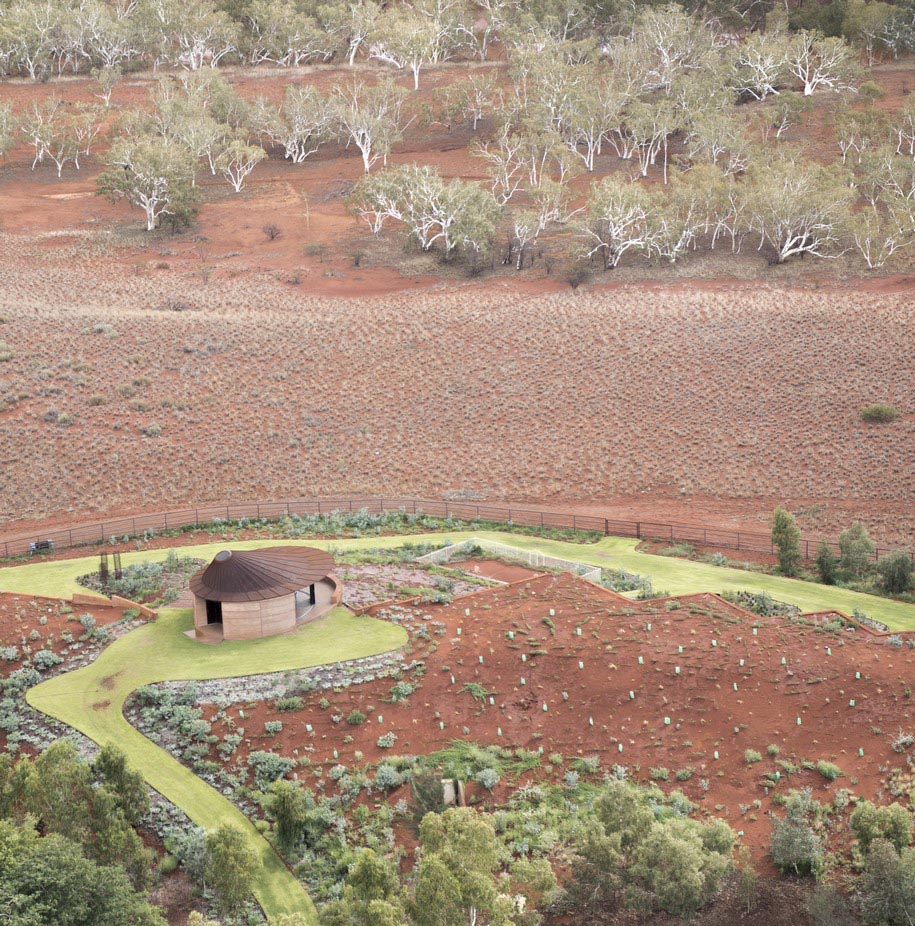 The oval chapel overlooks a family cemetery and ghost and river gums that line the riverbank in the background.

The residences are stepped to maintain a level of privacy on each covered veranda. There are contiguous but are not internally linked. The rear walls of the residences are buried under the sand dune. 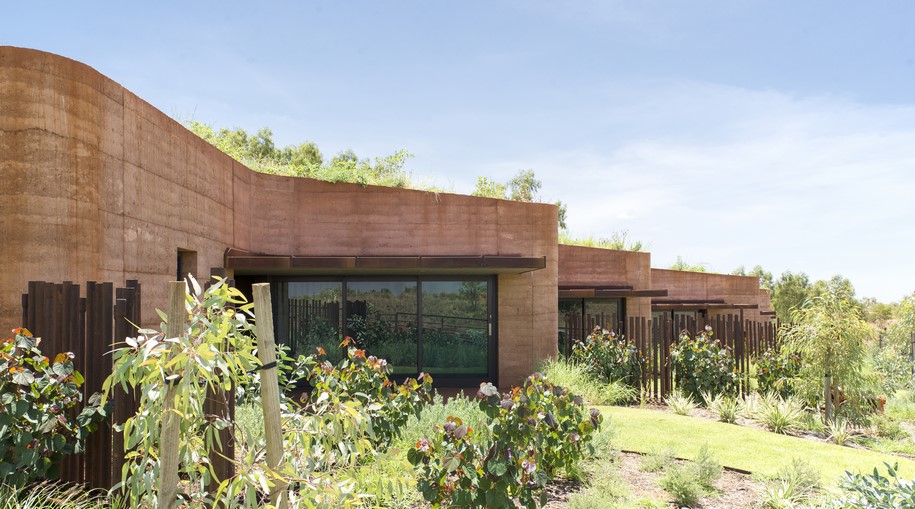 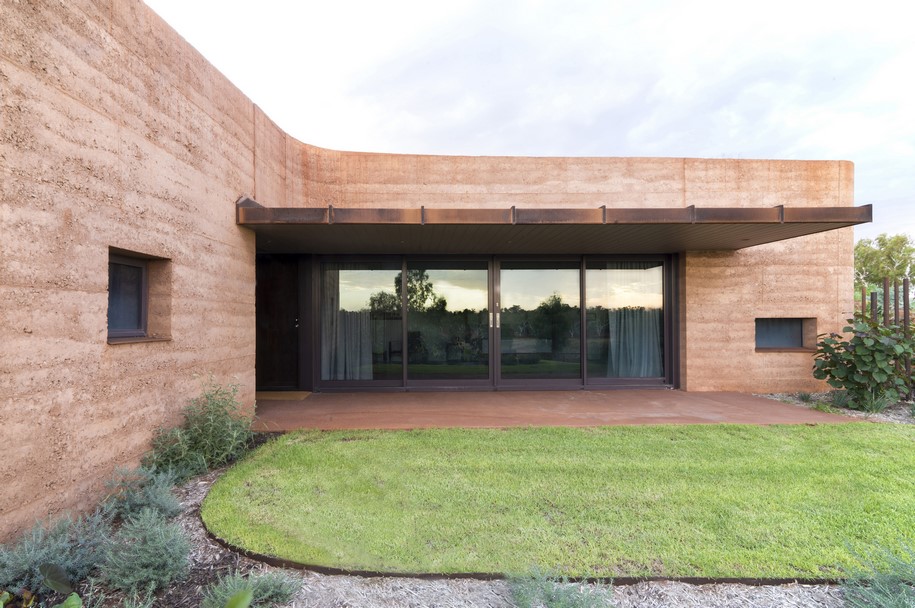 The northern end of the rammed earth wall tapers down to where an older building is used as a communal meeting and sitting area. A pergola constructed of old drilling pipes provides a chequerboard of dappled light.

The deep awning roof is designed to keep the sun out during the hottest part of the day and invite the inhabitant to outside and enjoy the cool evening breeze. 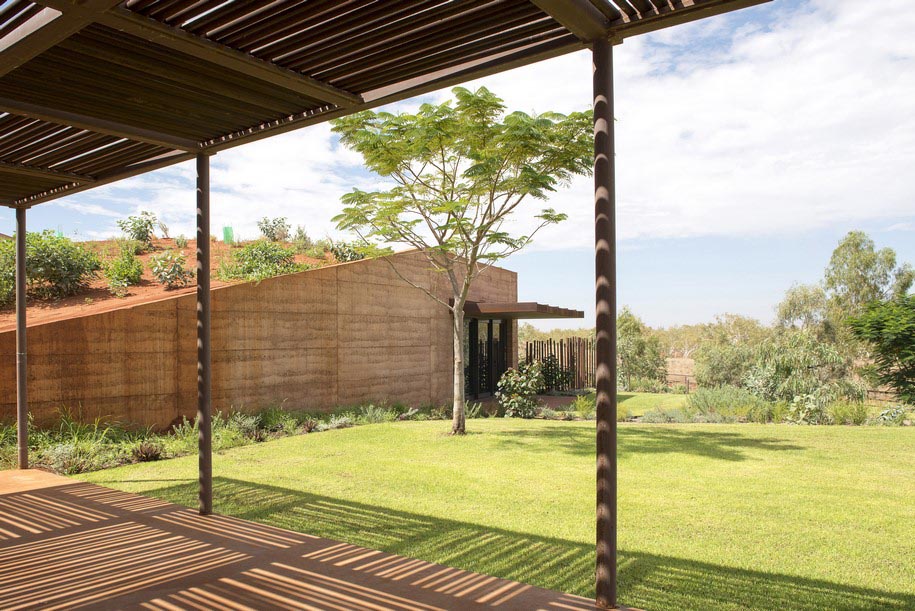 The awning roof is a Cor-Ten steel cyclonic shade frame, mirrored by a concrete slab on (the) ground. The concrete slab contains gravel and aggregates from the local river, which lend a reddish colour to its polished surface.

Internally, one finds a comfortable environment, cooled by the rammed earth walls and the metre deep sand hill. The interior design by Sarah Foletta is a restrained, natural and robust selection of materials and furniture. 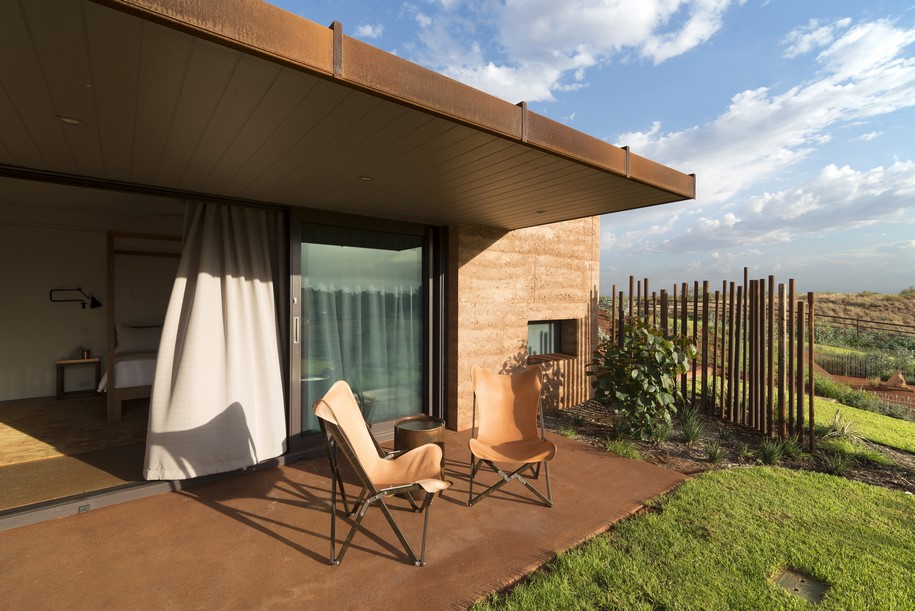 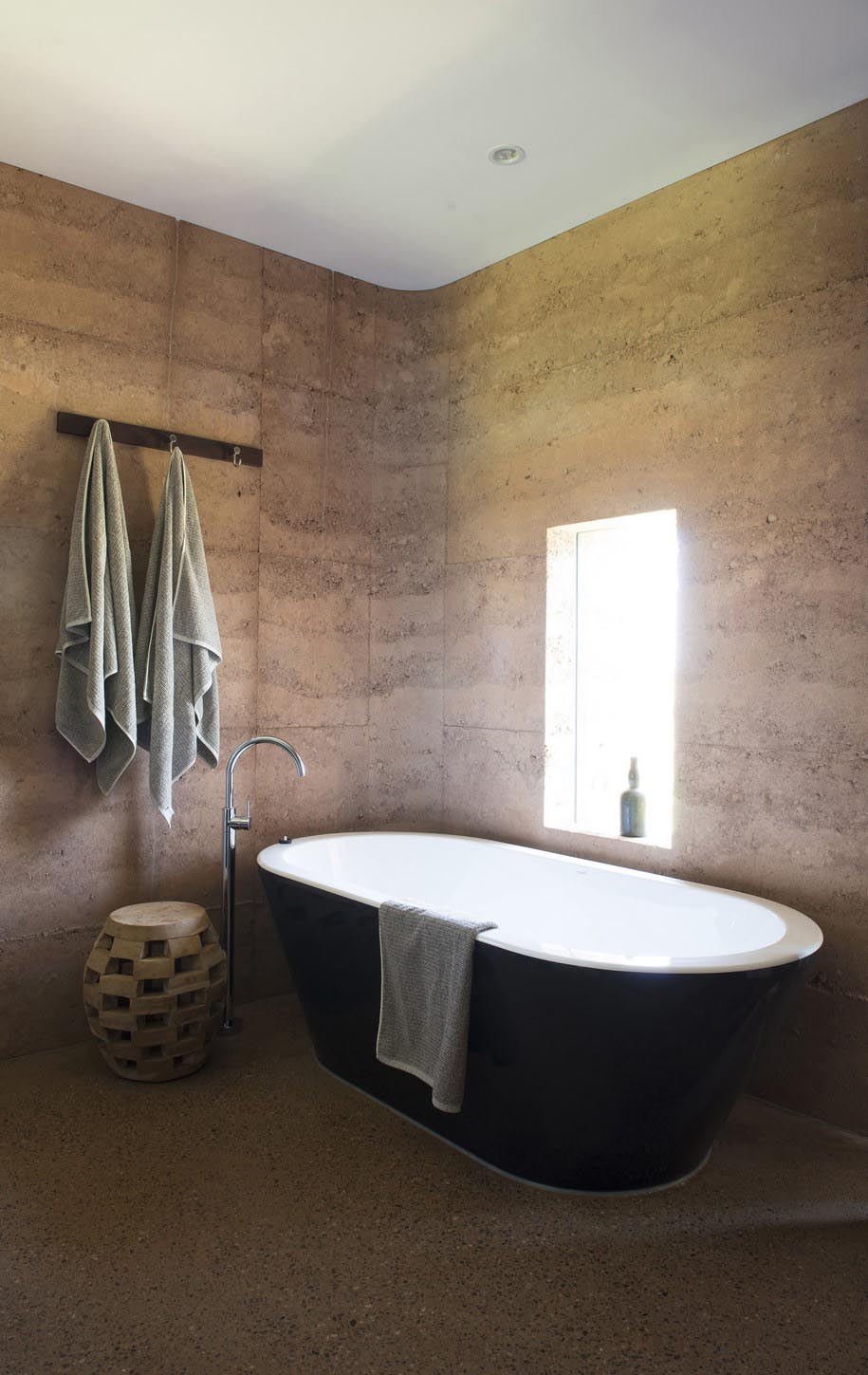 The centrally located chapel also forms the apex of the sand hill. 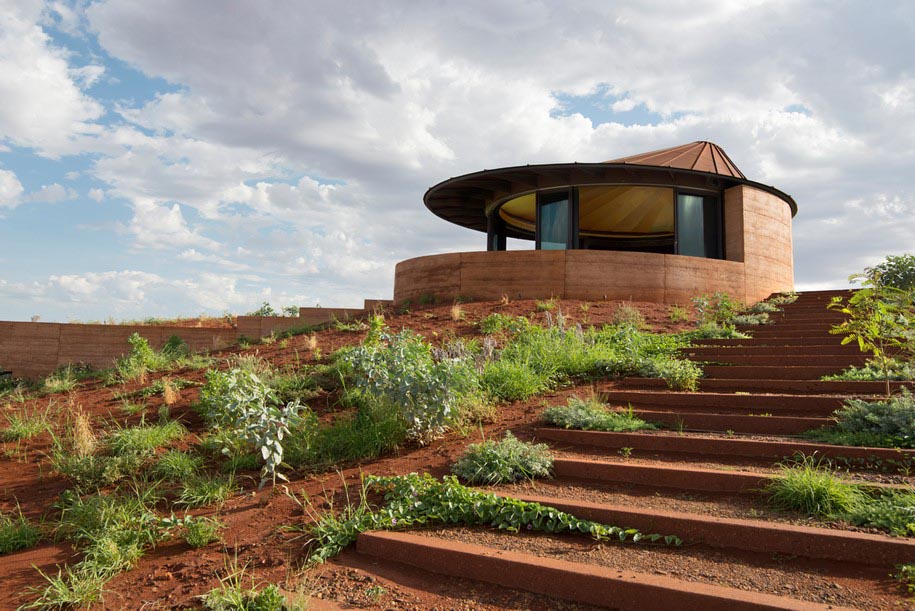 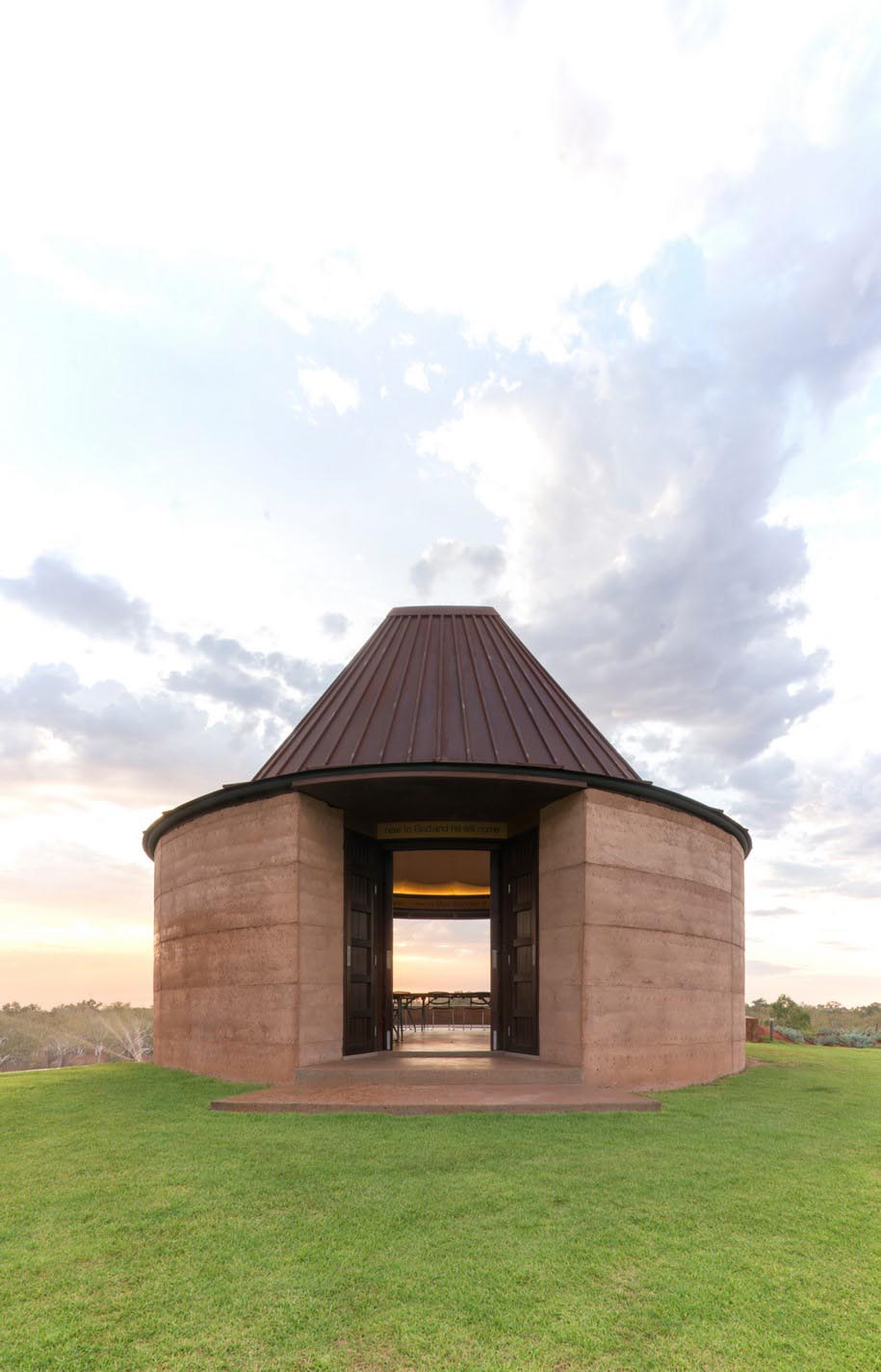 The roof is made from Cor-Ten steel sheets, forming an oblique cone and culminating with a skylight in the apex. The roof was fabricated off site and transported in two halves.

A glass covered oculus, oriented east and inspired by the Pantheon of Rome, maintains a celestial connection. 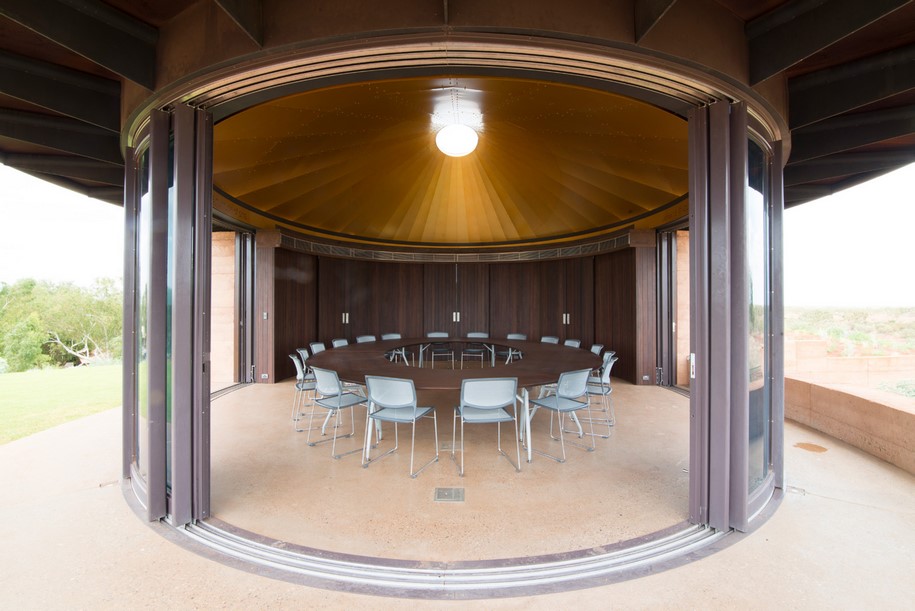 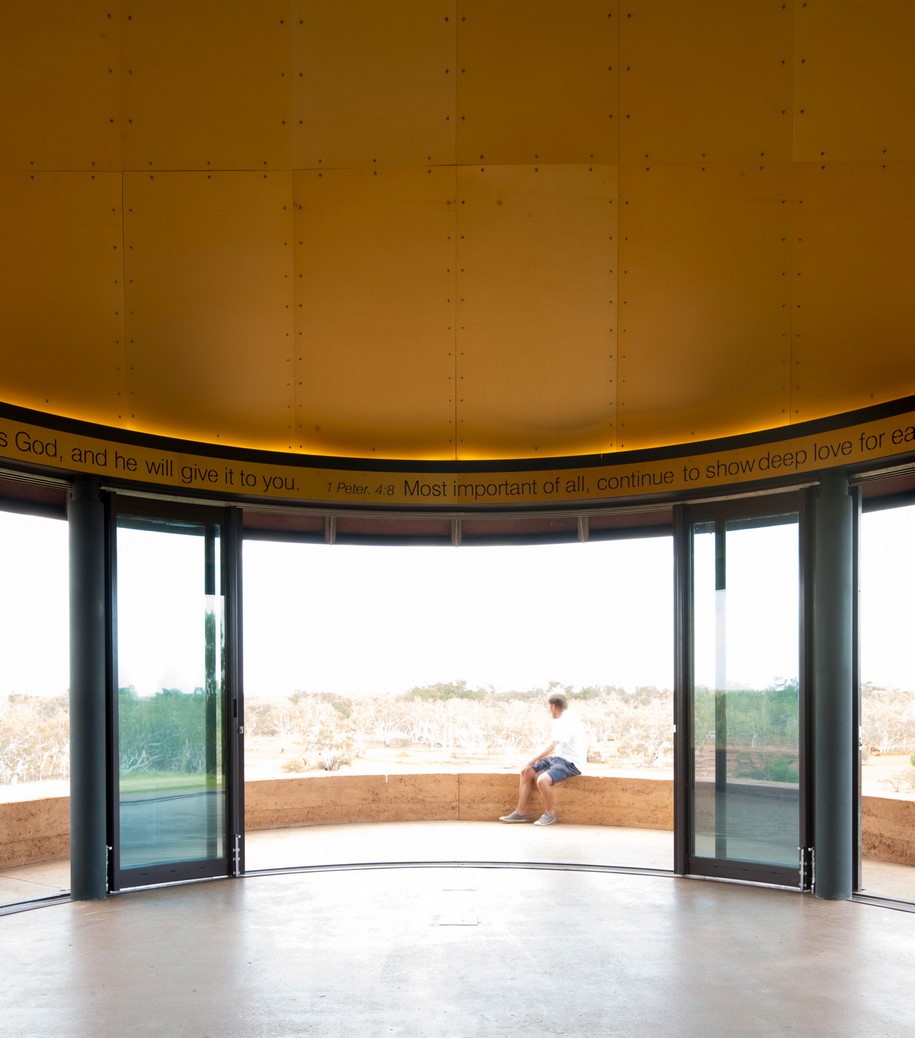 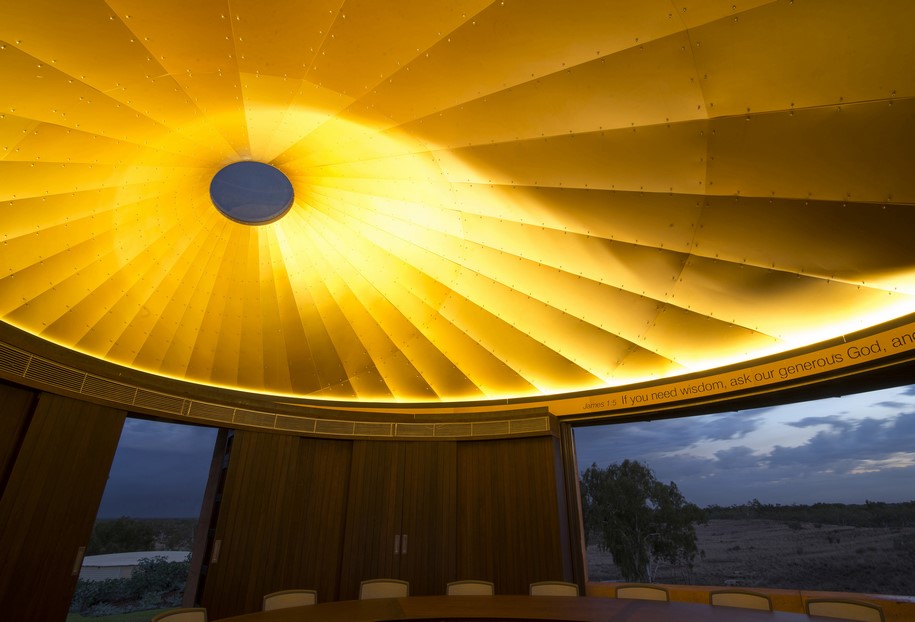 Gold annodised aluminium sheets line the ceiling of the ‘chapel’, cyclonic rated, curved sliding windows can close the pavilion to protect its interior from dust storms. 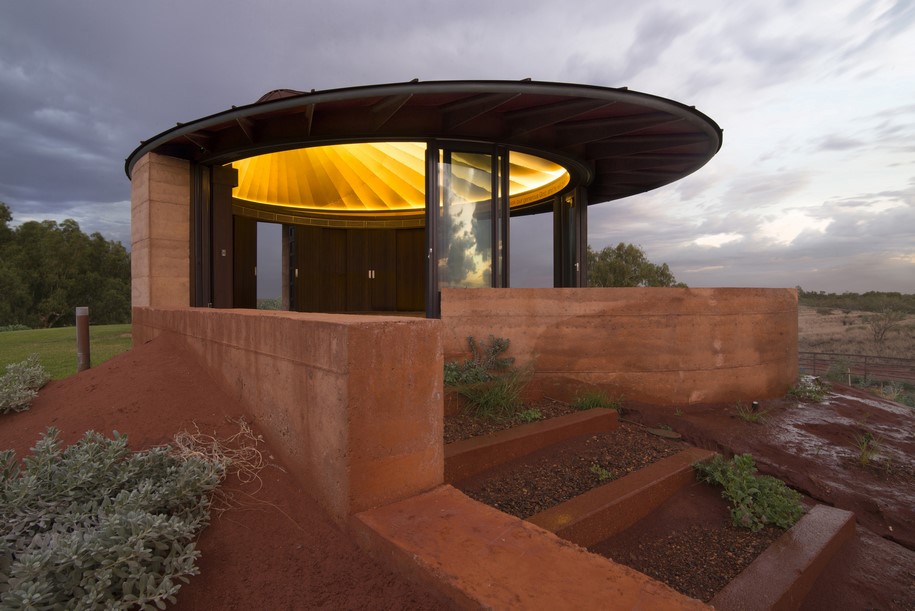 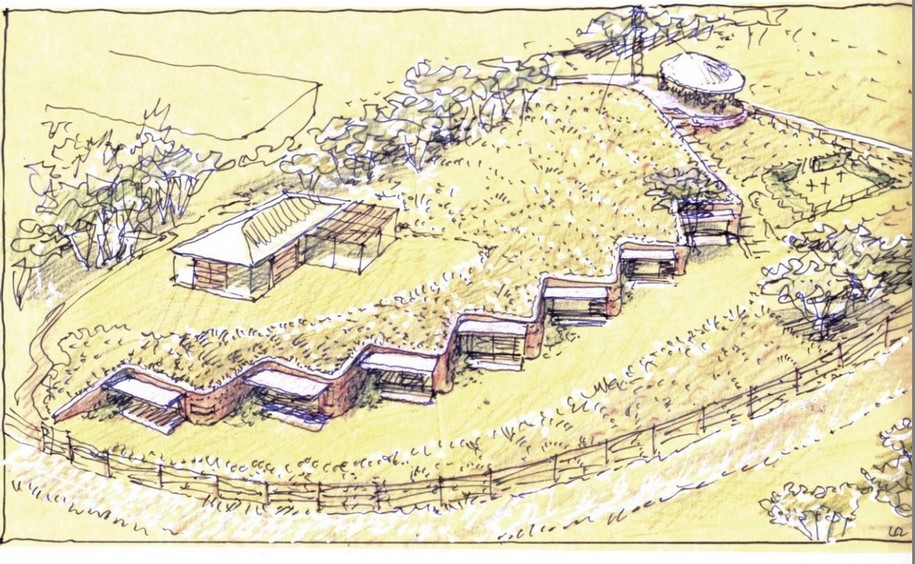 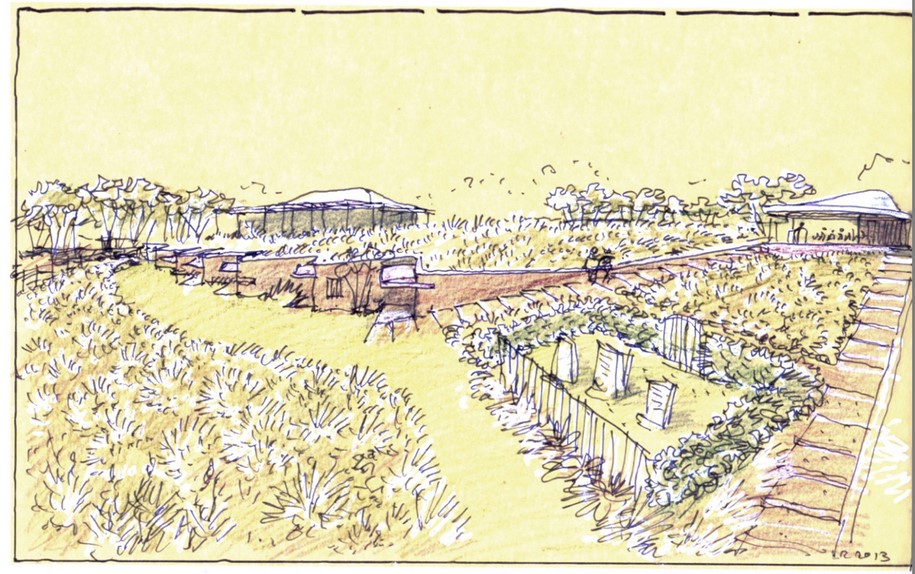 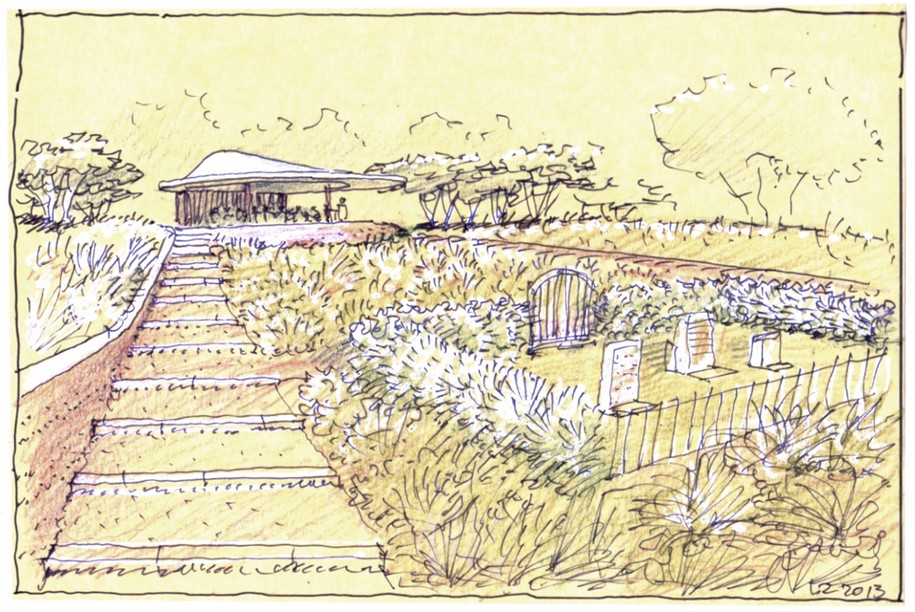 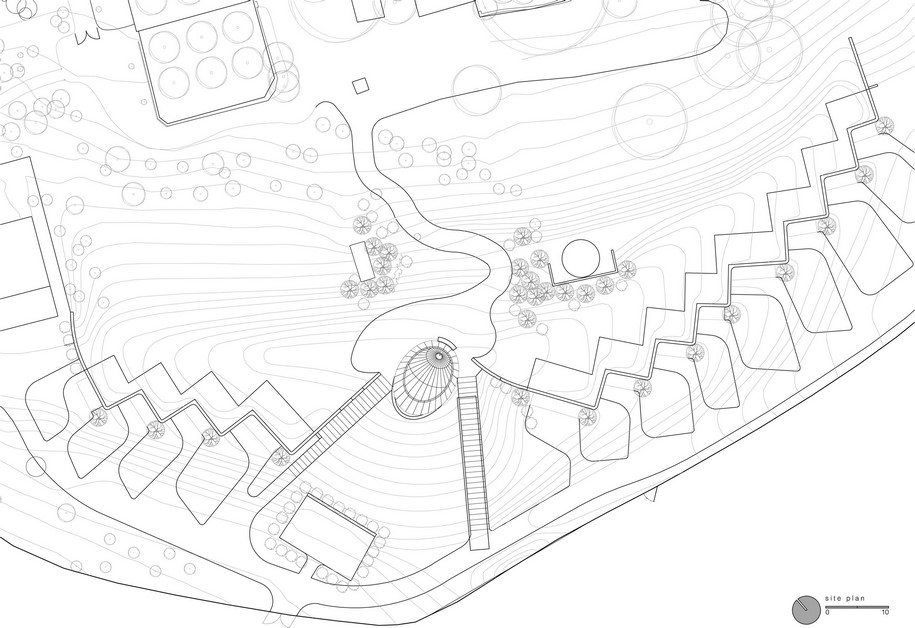 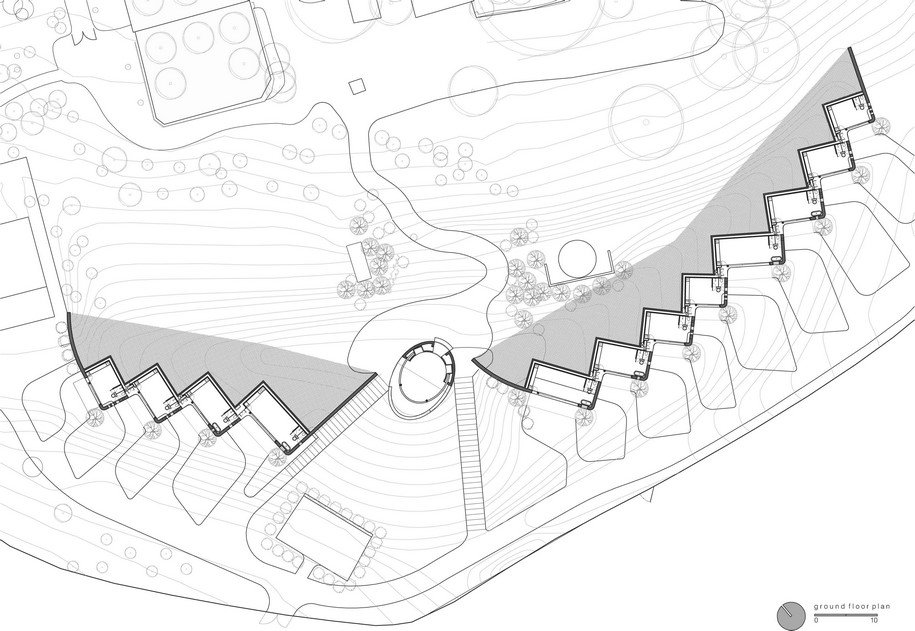 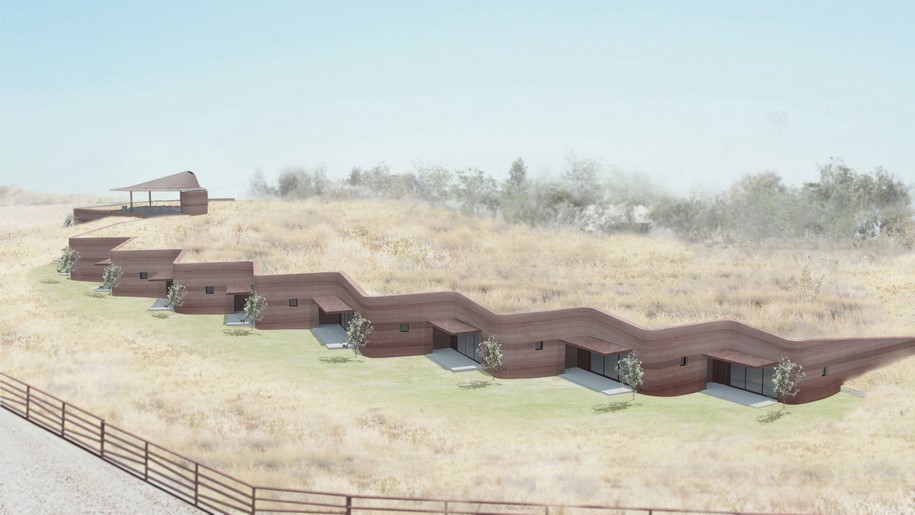 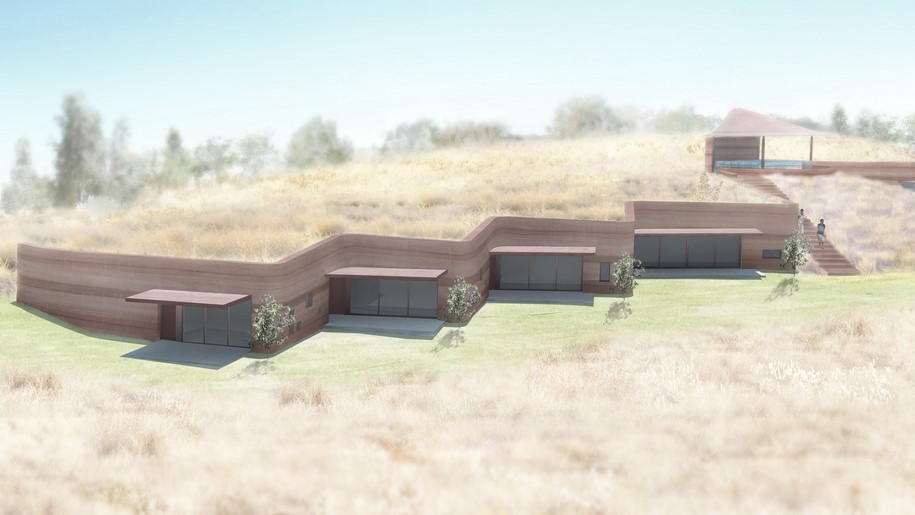 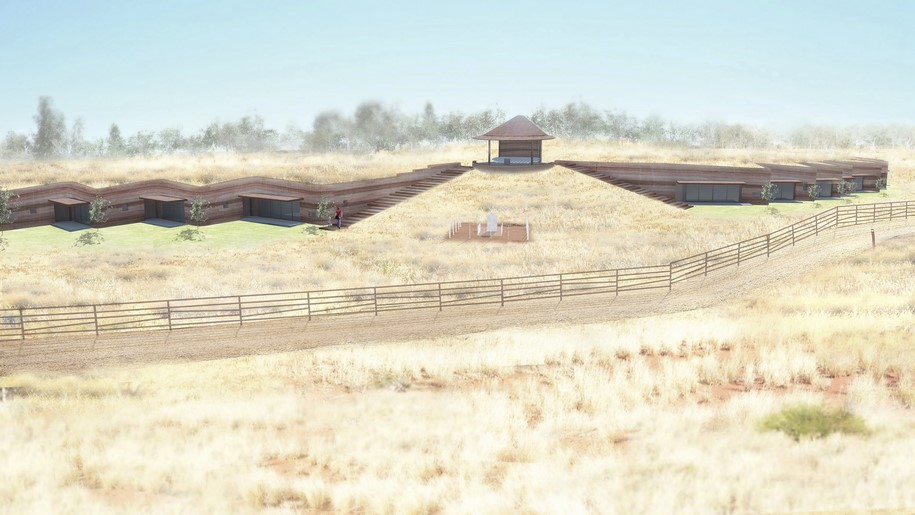 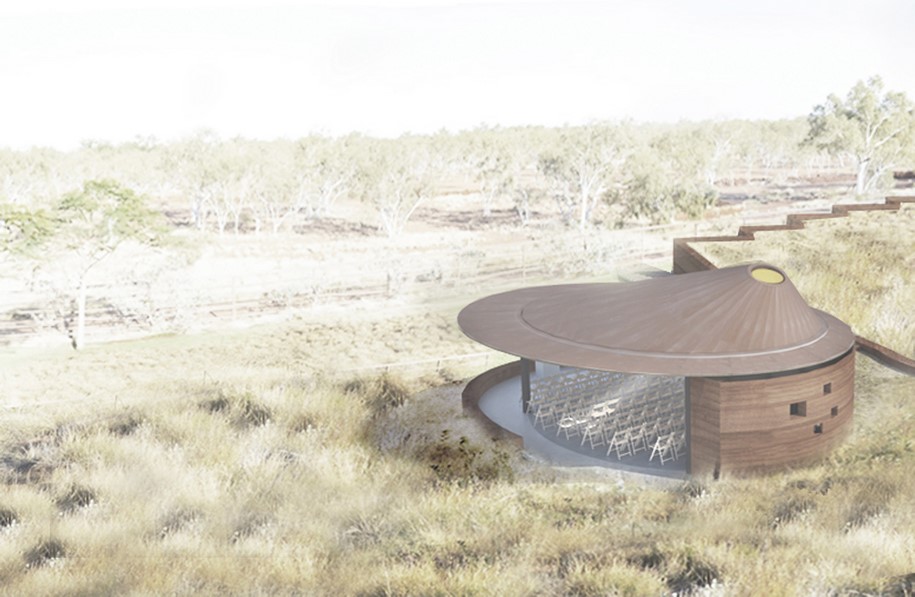 The Great Wall of WA has been selected as a finalist in the (Australian Institute of Architects) Western Australia architecture awards.

Did you enjoy this rammed earth construction by Luigi Rosselli architects ? Have a look at this Rough Cave House in Spain by UMMOestudio !