When a cave shapes a house

The Cuevas del Pino estate sits in the foothills of Sierra Morena, in calcarenite stone terrain arranged in a slightly sloping strata that gives rise to various geological formations native to the area. This cave, along with others, resulted from quarrying that supplied Cordoba with stone during its most splendorous centuries. Historically, the product of these hollows in the rock emerged when livestock watchmen used them as small shelters. Today, they have been rehabilitated to form rural housing and accommodate new countryside activities. 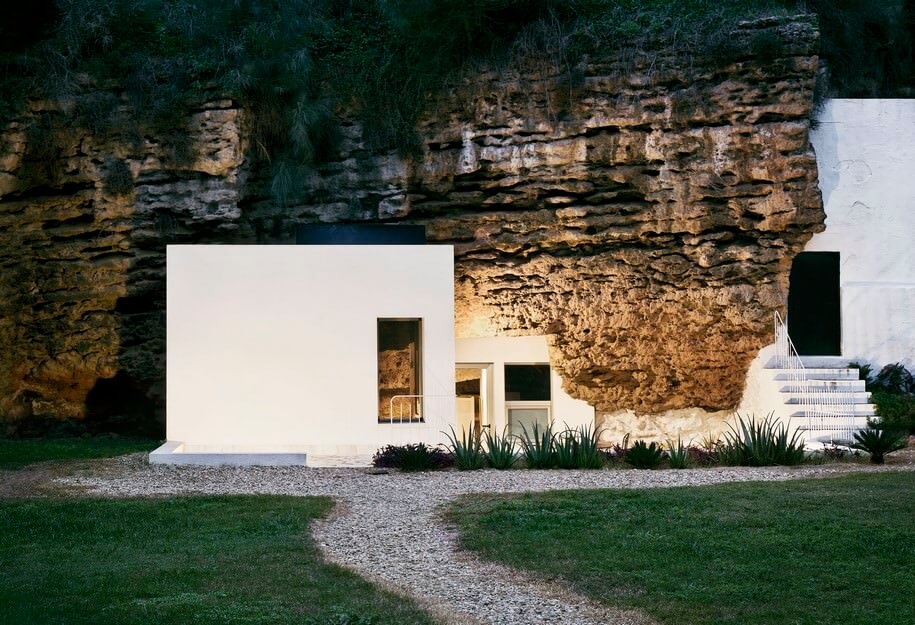 Both the pre-existing walls and the rock itself, enclosed and defined an area of great spatial and material wealth, and for this reason, UMMOestudio decided to focus the intervention toward a fluid and continuous dialogue between those pre-existing conditions and the new architecture, always from a respectful position seeking proximity rather than direct contact. 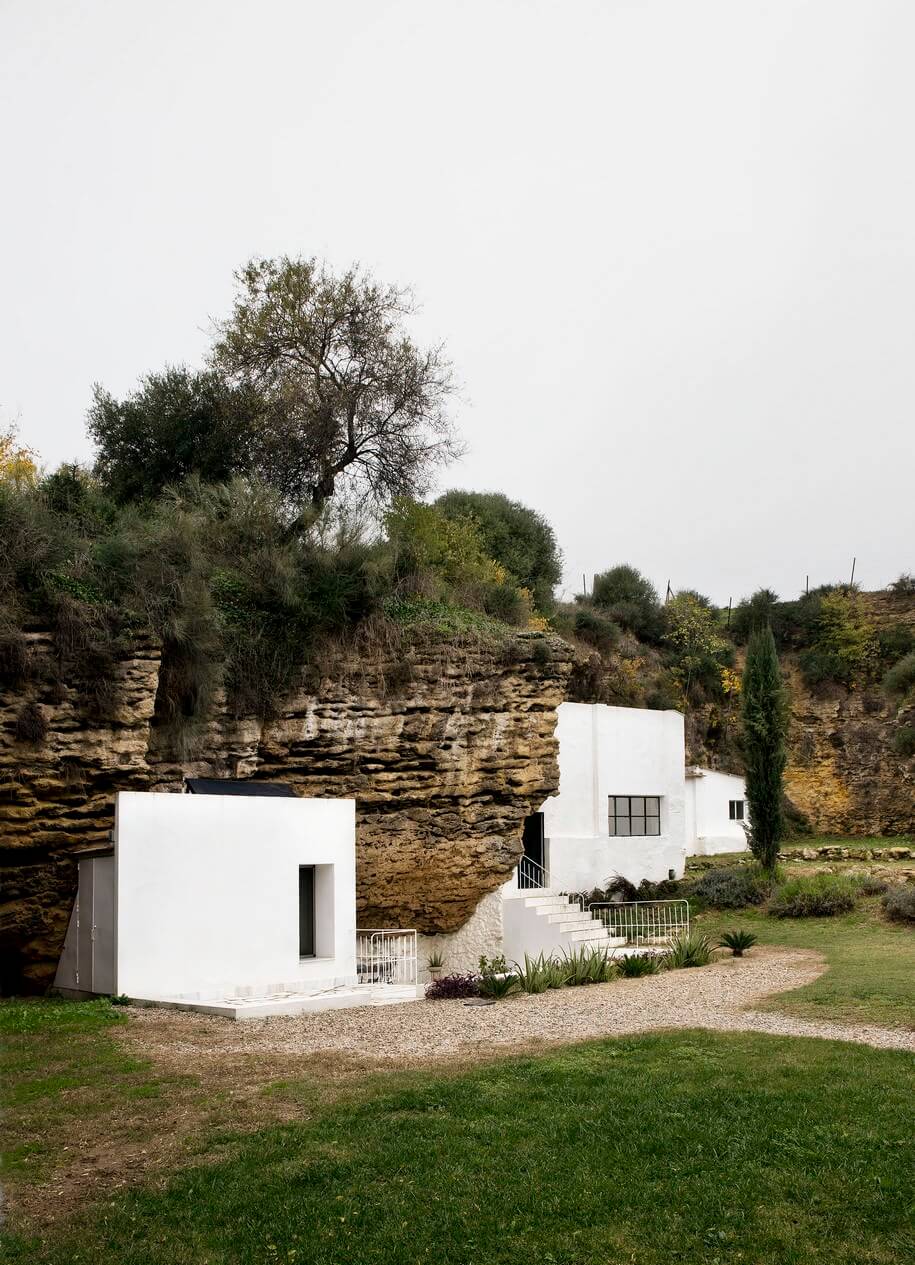 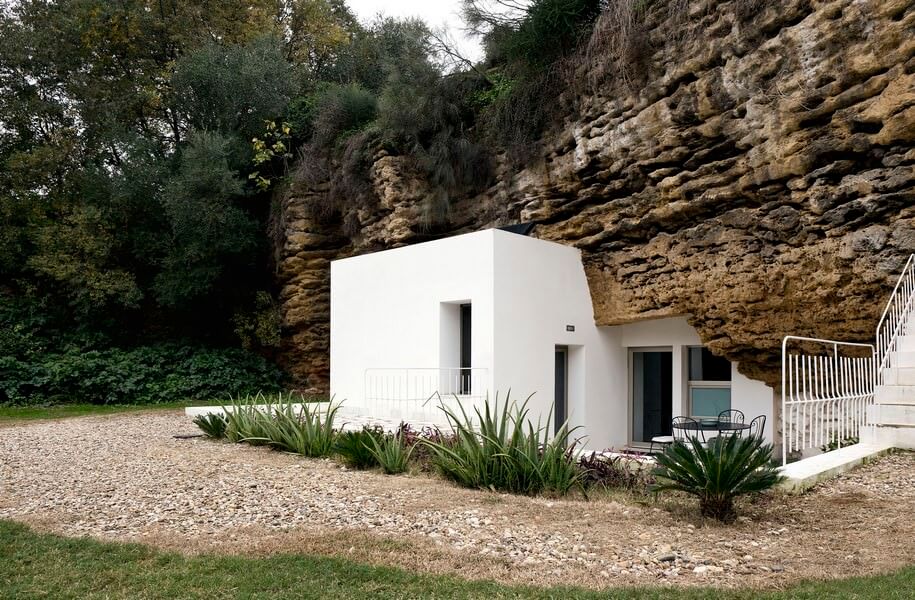 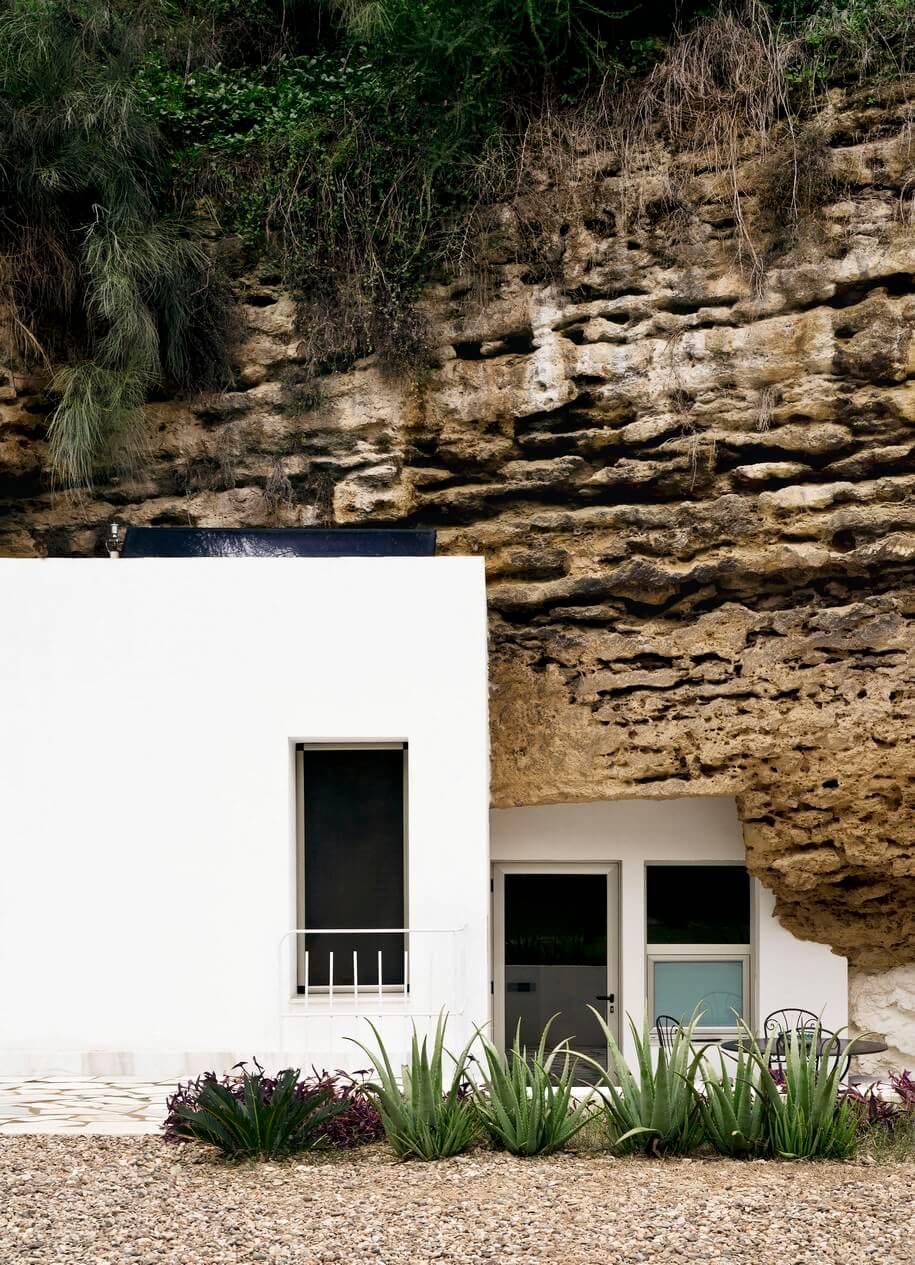 Within this dialogue, UMMOestudio have created a new spatial experience that manages to value the tectonic nature of the area through the use of new architectural elements: clean and quiet volumes, bright and ample spaces, use of stone materials for the flooring bring a cozy atmosphere to the cave house.

Concrete and marble, glass openings to the south to conjure natural light and handcrafted wooden furniture give warmth to the cave house. 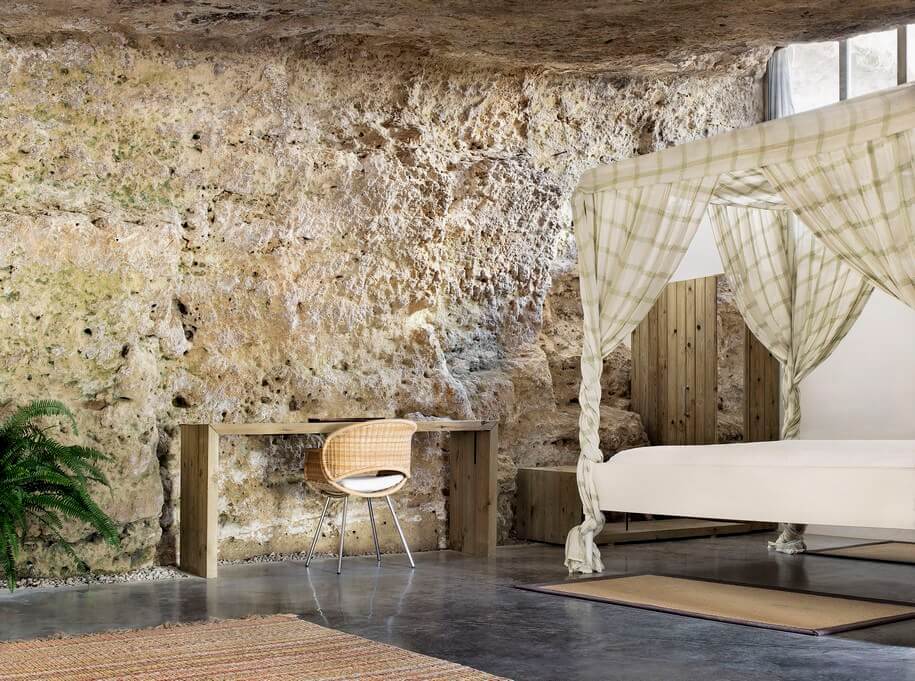 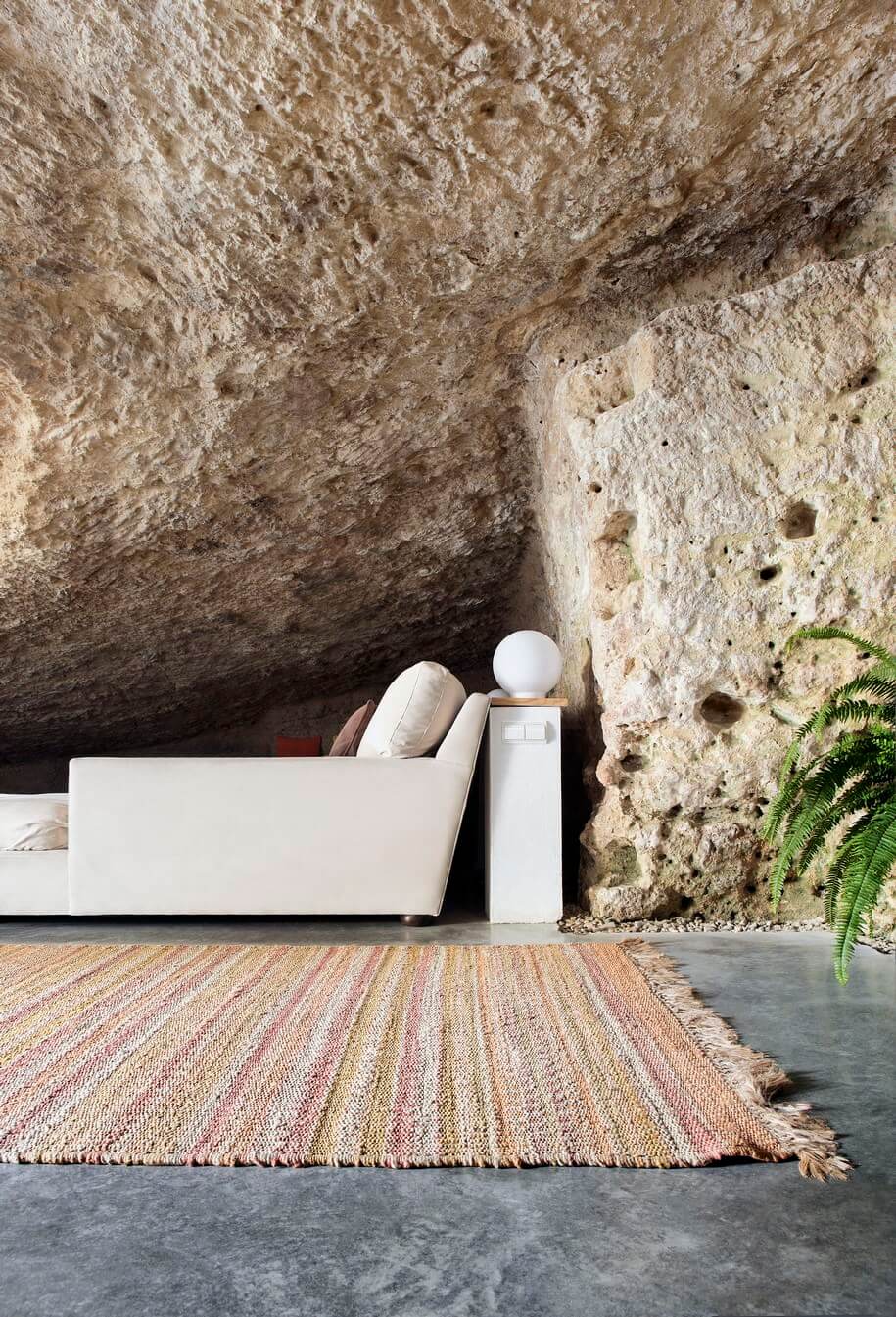 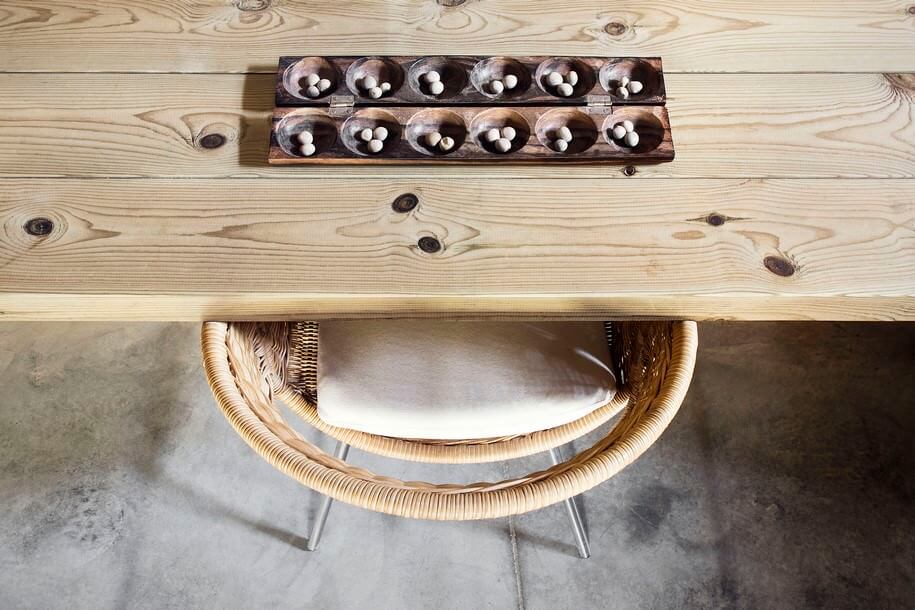 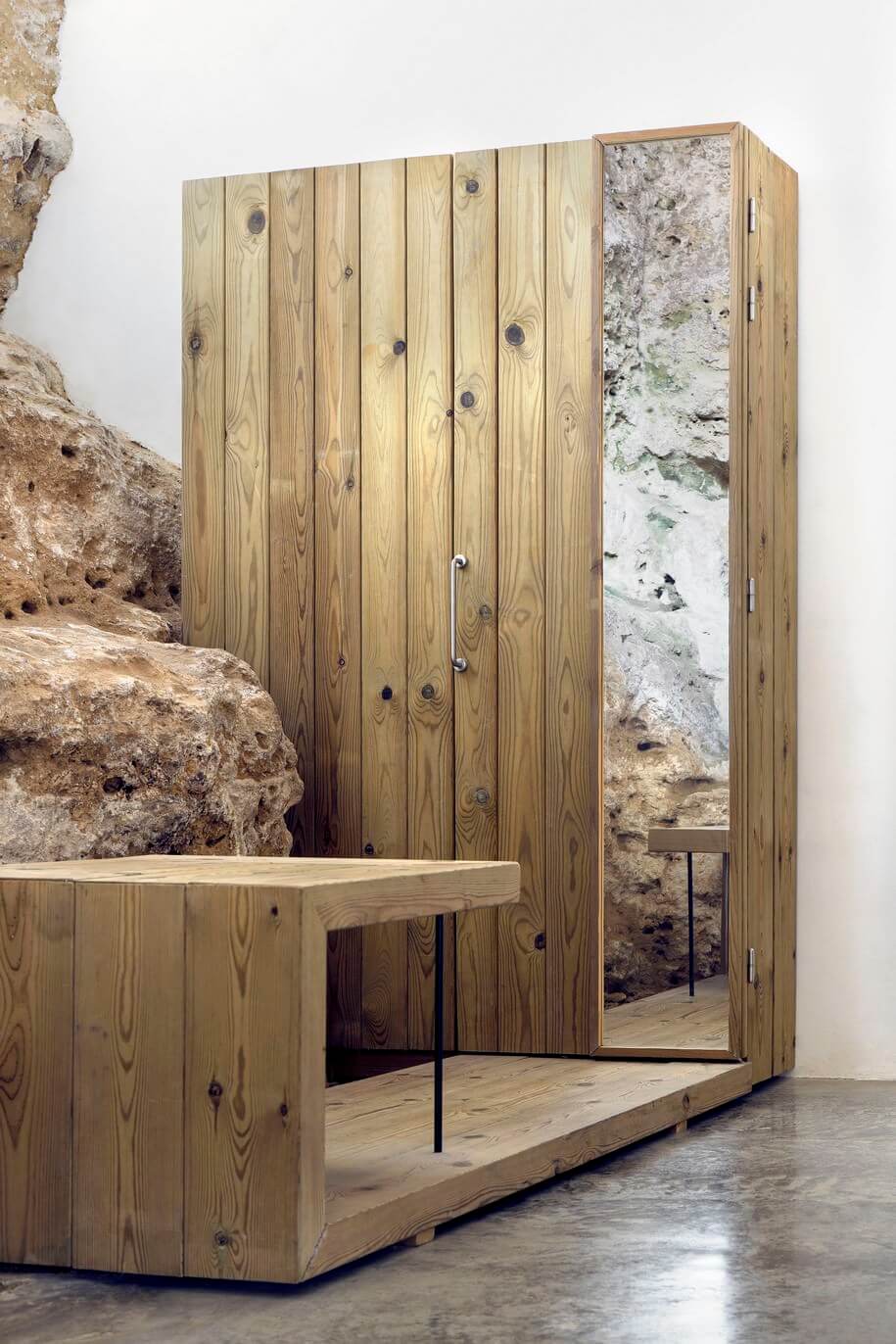 The façade of the cave house is joined to a series of vernacular building structures rooted in the traditional use of the farm and can be found across a 3,000 m2 garden located within a 23-acre estate, dedicated to ecological agriculture bearing crops of beets and garlic and fruit trees of different autocthonous varieties. A path leads us to the terrace of the cave house and invites us to come stay inside the interior of the earth, from the bottom of a descending staircase to a level height from which we can enjoy and contemplate the surroundings and the richness of the circumambient nature. Acting as the preface to the cave itself, this introductory space acquires a particular importance as the juncture between the exterior and the interior, showing us a contrast between the strength of the stone and the lightness of simple and discrete architecture that adapts to the existing form of the hollow, allowing us to go deep inside and create a refuge. 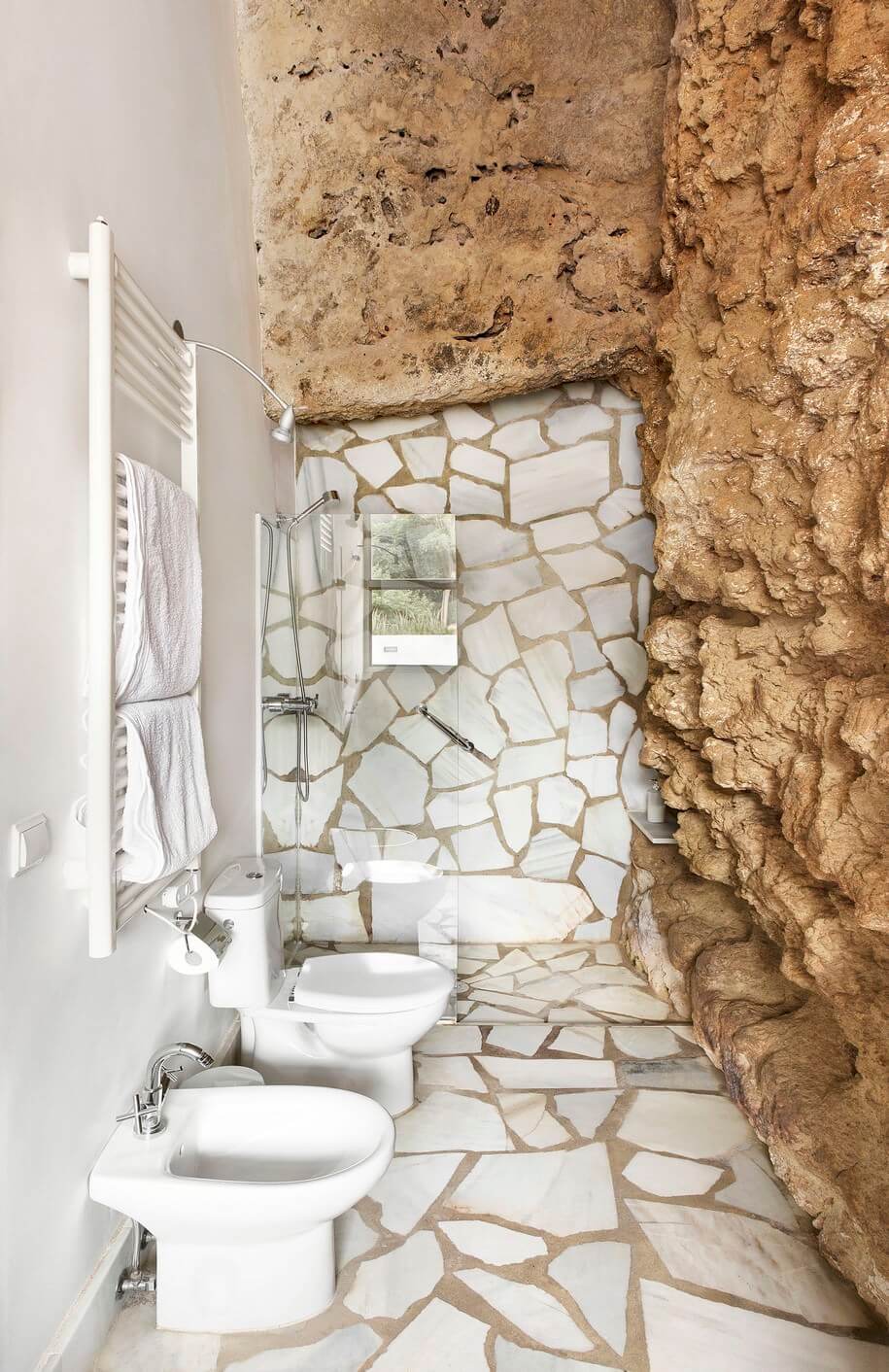 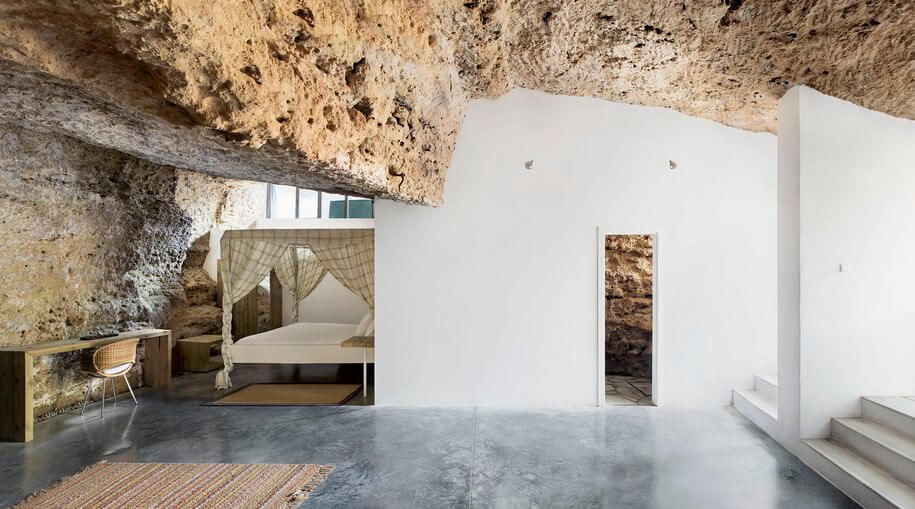 Aside from fulfilling its logical function of capturing natural light to feed the interior space, the use of glass in the façade also allows us to create a set of transparencies that likewise sheds light upon the characteristics of a space in which we are about to enter, an effect that acquires its greatest splendor at night, thanks to the contrast of the materials and the carefully crafted illumination from its interior.

Access into the interior of the cave house is like entering an unexpected space full of unknown sensorial nuances, where silence prevails and takes on a fleeting role before ours eyes can marvel at the lighting effects cast upon the stone and the distinct materials used to shape the space, all of which is accompanied by the sensation of thermal conditions preserved year round within the entirety of this massive cave and of which are independent from exterior climatic conditions during cold winter months and hot summers. 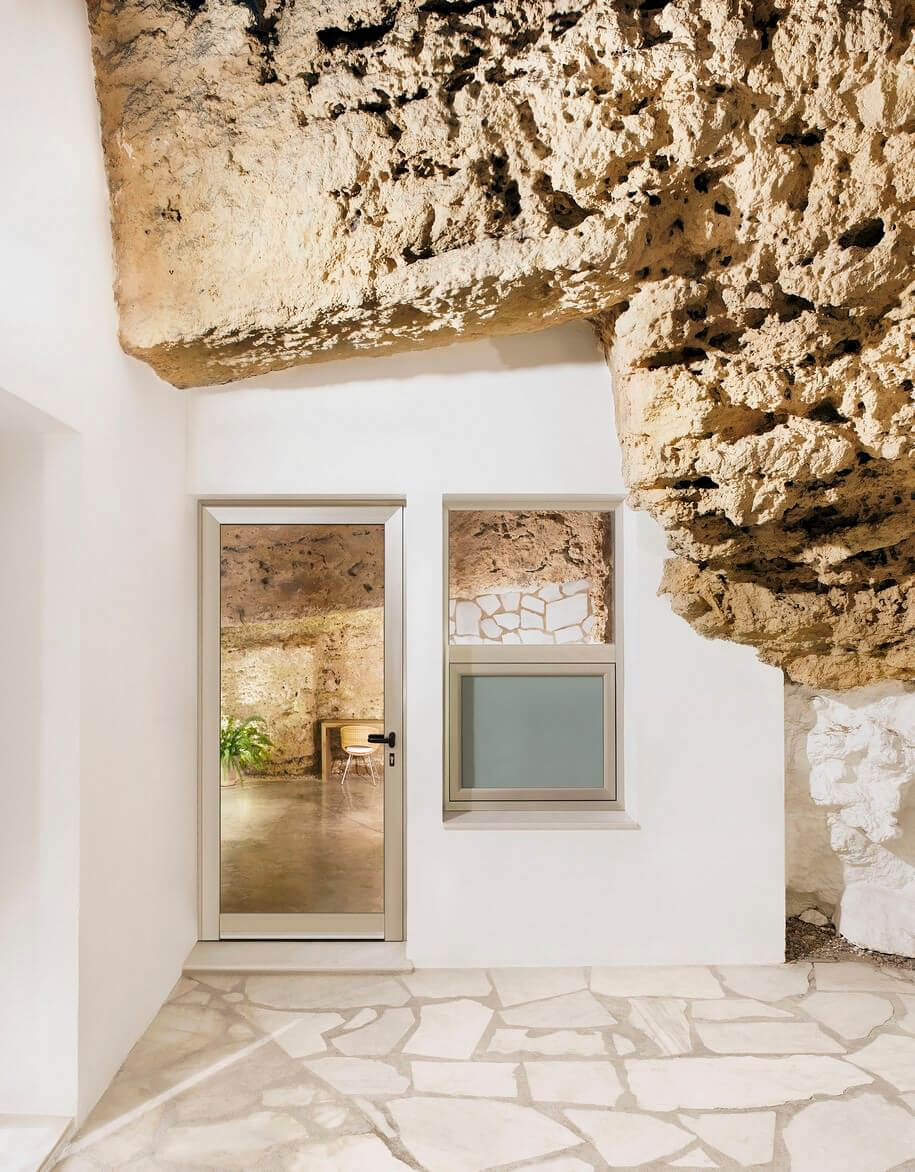 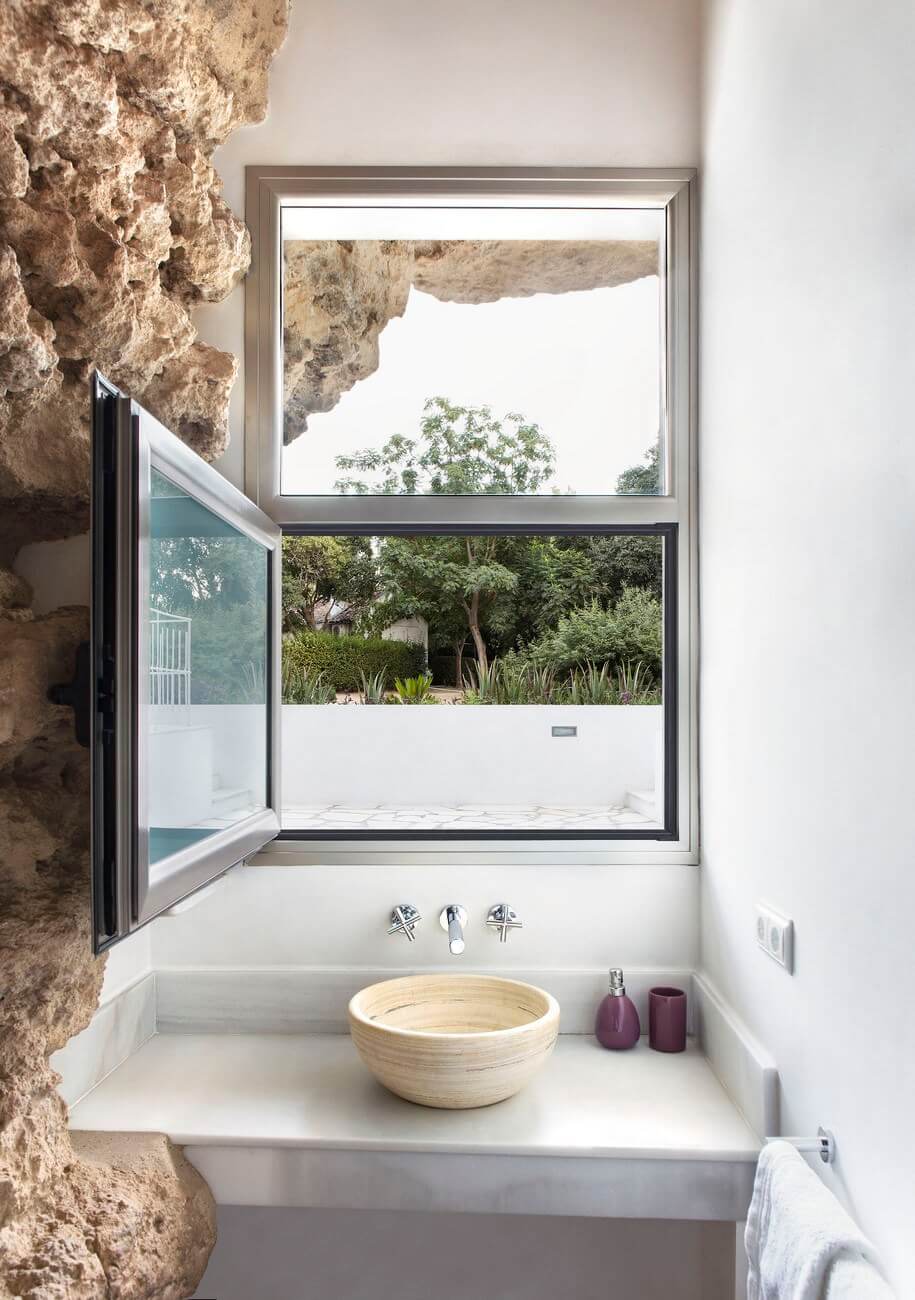 Unlike similar spaces executed in caves, which are typically designed with a single entry into a windowless interior as a result of direct excavation of the land, the particularity of this cave house can be found in the bedroom, where the presence of a wide opening to the exterior faces east, capturing the morning light while at the same time providing a healthful dose of cross ventilation, renewing the air in all the rooms.

With a keen awareness of the high value of the natural space and with an intention to cause the least possible impact on the walls and ceiling of the natural stone, the project was designed with a multifunctional floor capable of responding to the distinct needs of the accommodation. This element, executed through polished concrete acting as artificial stone, creates a dialogue with its surroundings, drawing near to its limits but without ever touching, while at the same time creating a distribution of the various facilities, enabling them to reach the necessary points required. The flooring acts as a vertical division in the bathroom as it rises to create the only sector that is differentiated inside the cave, providing intimacy while changing the chromatic hue of its finish. 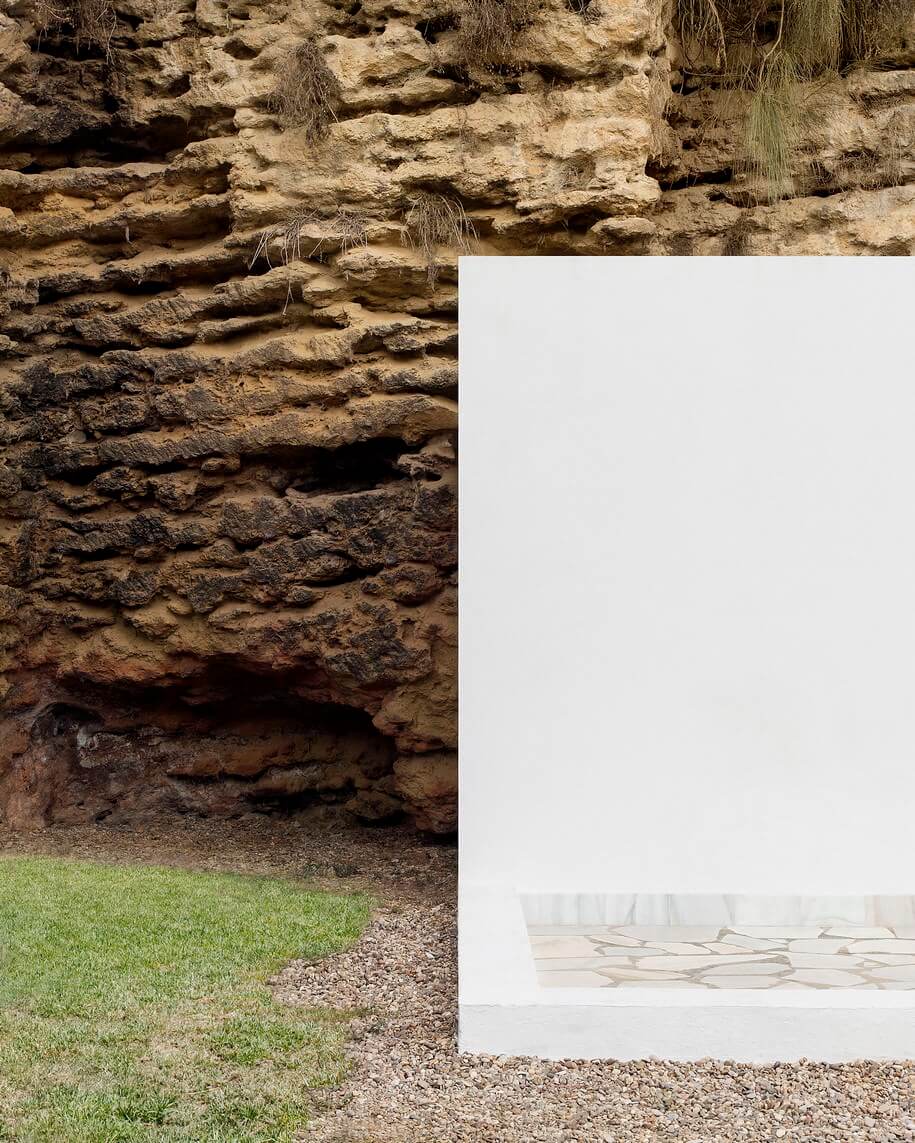 As a gesture of respect towards the natural, direct contact between the pre-existing materials and the newly added elements was avoided to the extent possible; however, in places in which it was required, the rehabilitation attempted to opt for materials in a natural state with a presence well-suited to the atmosphere of the cave in each of its variables. 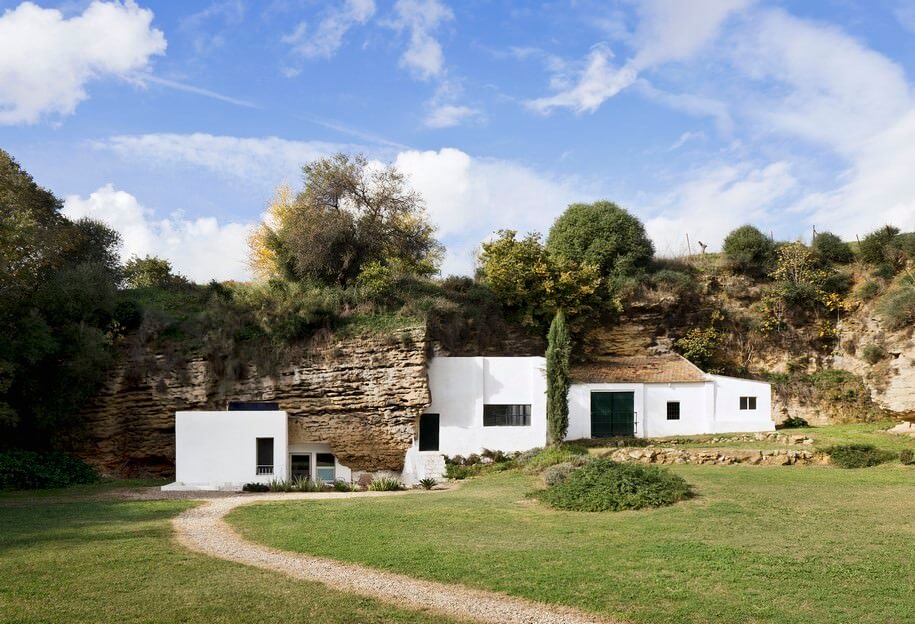 During the design and construction process, which took an extended period of time due to the complexity and singularity of the work, it was possible to rely on the participation of various collaborators who contributed their particular points of view during the decision-making process. Within this group of people, UMMOestudio would like to highlight the contributions of the owner of the property and artist Pilar del Pino, who played an important role as the interior designer and coordinator of the various agents involved. 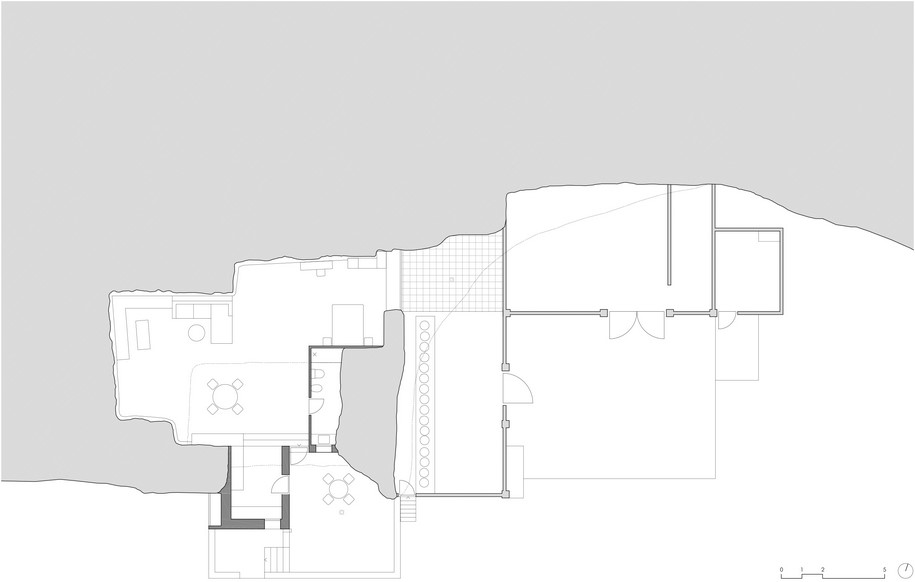