Pandemic Architecture, an International Ideas Competition curated by the Design Ambassador for ARCHISEARCH.gr,  invited the creative community to open up a dialogue and create a think tank, looking for ideas from the architectural and design community about the future of the living, the workspace, the public space and the tourism industry after the outbreak of Covid-19.

The COVID-19 pandemic hit hardest in cities. The street life–that “vibe” that city dwellers hold so dear–was at once the city’s undoing. As people travelled across their cities, the virus followed. 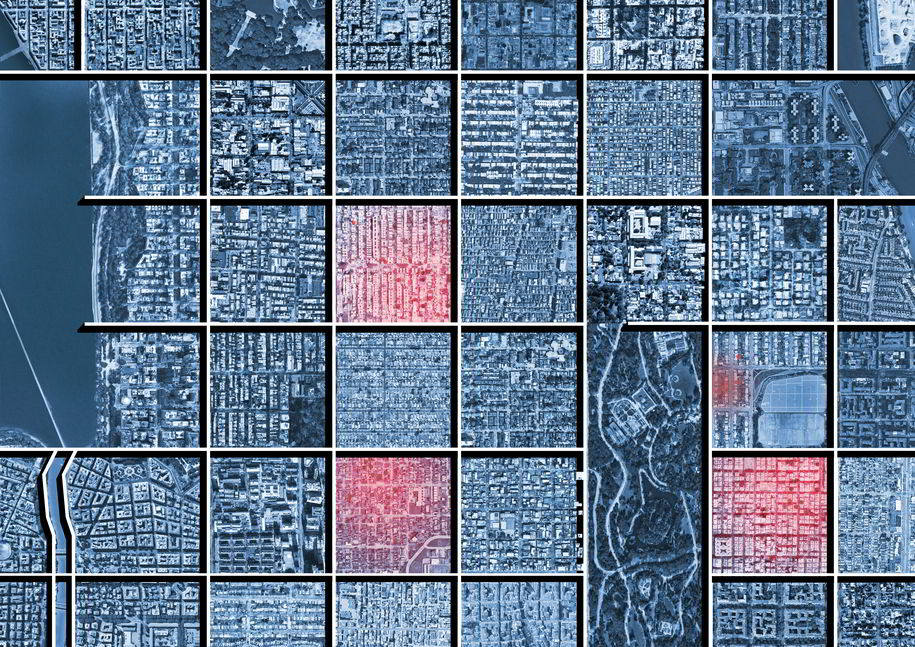 But, let’s not give up on density, rather we must reexamine the way people live in cities during these circumstances. Our solution aims to treat the territory of the city as a whole by inverting the model in which consumers travel, we speculate a condition in which goods and services have a mobile counterpart, evenly distributed by our deployable network. 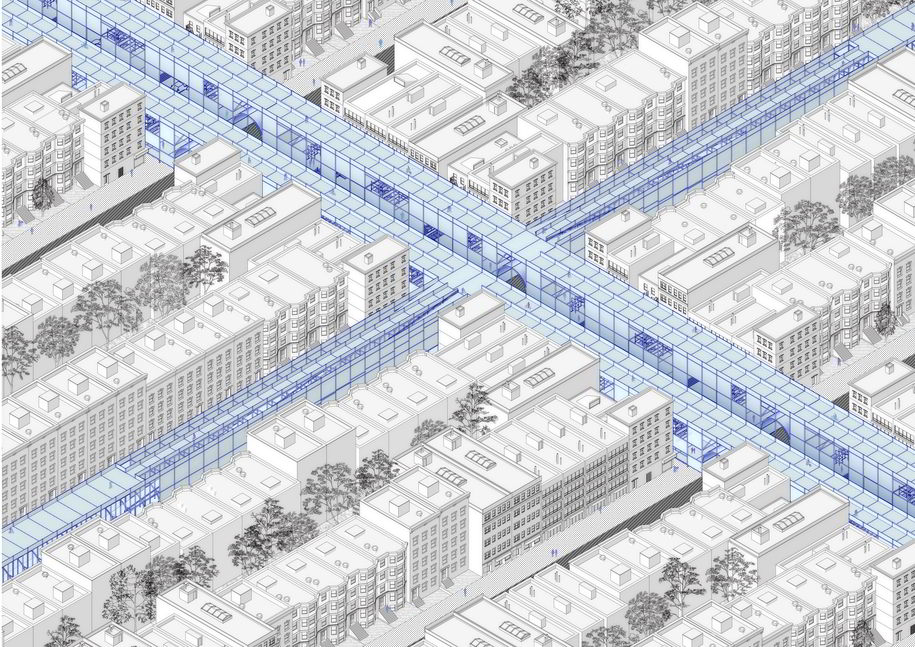 THE “POP-UP CITY” IS AN ALTERNATIVE to the traditional model of brick and mortar storefronts. We propose the creation of a new temporary interface for the public to reach necessary goods and services. The scaffolding structure has two interfaces: with the street and sidewalk, respectively. On the street, areas throughout the structure are designated for parking ambulances, delivery vehicles, food trucks, and business owners to set up their pop-up on that block. 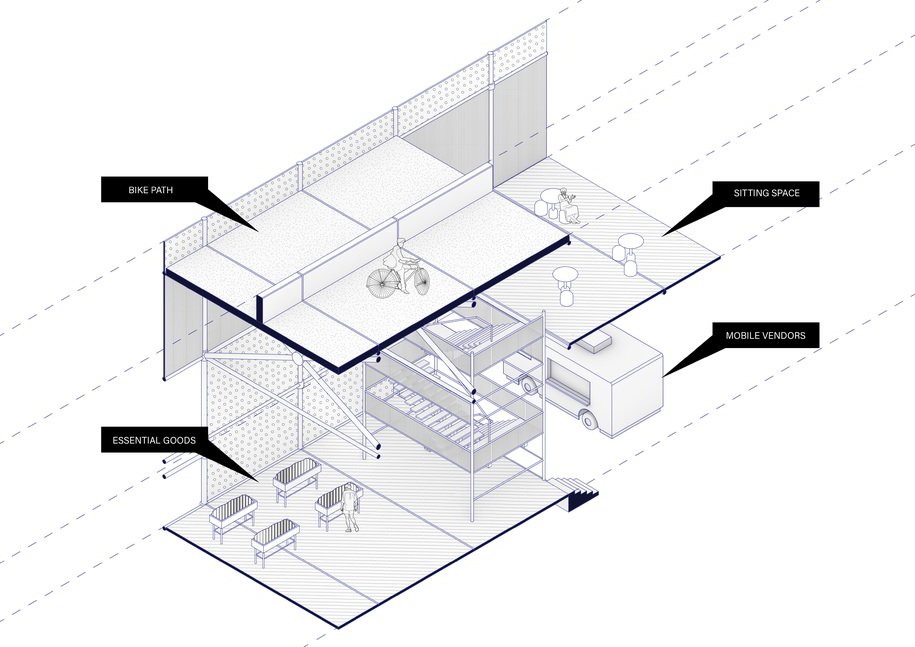 We envision a corresponding business model where these plug-in, mobile services move throughout the structure during different parts of the day or week, providing for areas where resources are otherwise not present. On the sidewalk, pedestrians can browse the different vendors and look for areas not too populated to enjoy some fresh air. The scaffolding provides public space raised above the ground in well ventilated, mesh enclosed spaces for people to get out of their apartments while staying local.

WE BELIEVE MONUMENTS ARE USEFUL. They remind us of history, of beliefs, and give us a sense of place. The scale of the crisis was so massive and the reordering of routines so sudden, that the response would have to do more than just help people get things. 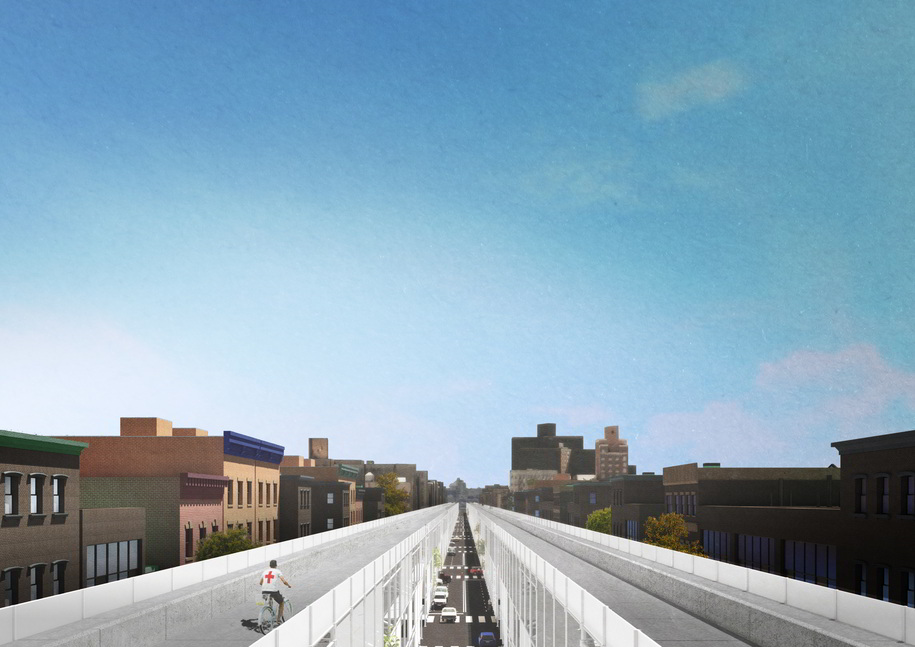 Goods and services were of course the baseline to succeed, but more would be necessary. After all, entire heterogenous communities were asked to come together to make personal sacrifices and “do the right thing.” All of this sounds aspirational, but any regular subway rider would tell you that expecting the general public to put others before themselves is unlikely at best. 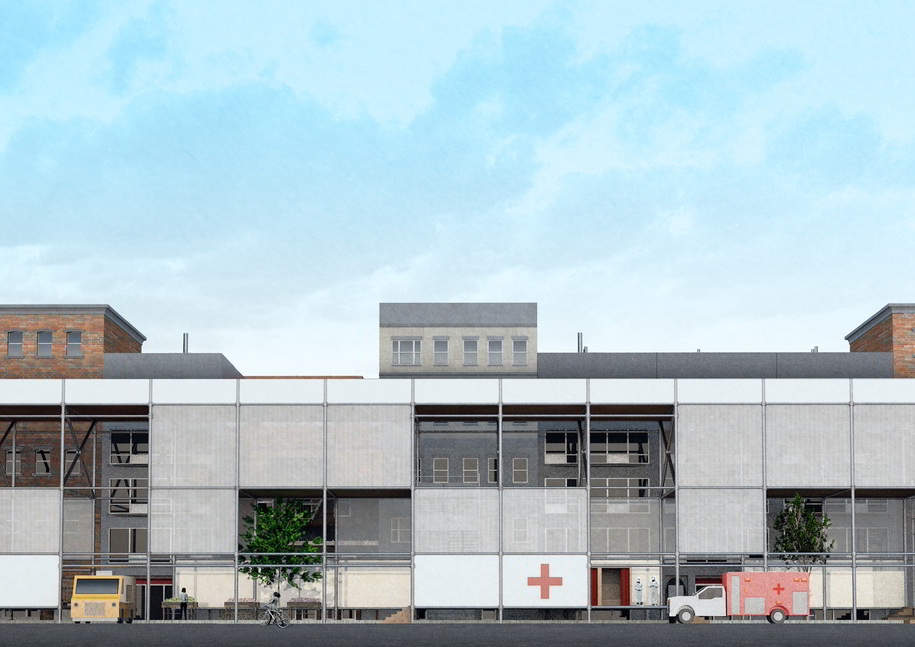 This project required a visible monument, something big enough to become a symbol of the changes we all need to make and big enough to disrupt normal patterns of daily life. Merely distributing goods was clever, but it wasn’t enough. We felt that scale could offer something more intangible: an architectural manifestation of the present condition. 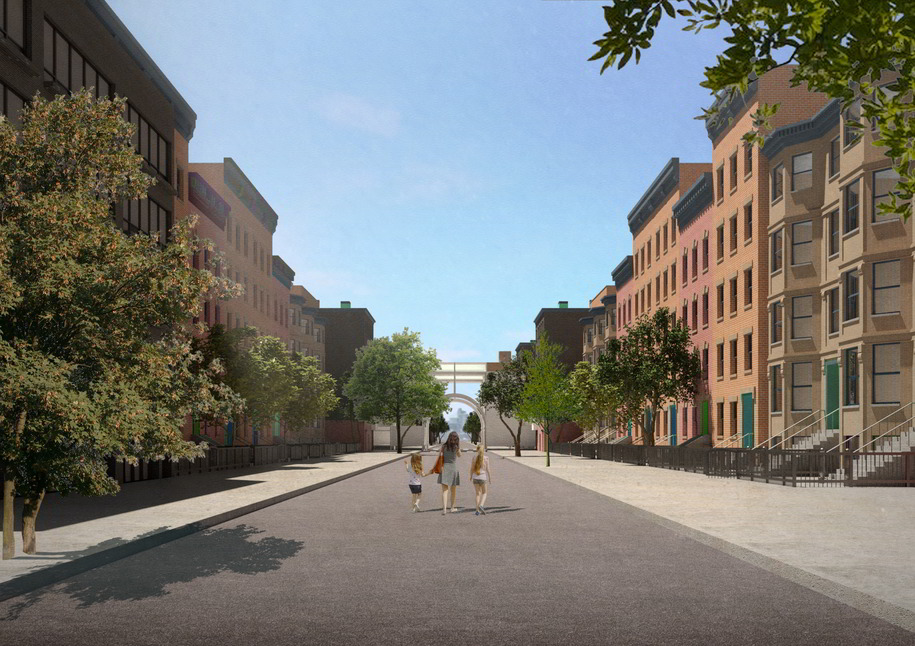 In proposing these localities, we knew how essential restricting movement would be, but we aimed not to build a fence lest this proposal reek of a new hunger-games-like reality. We wanted a temporary, dotted line rather than a solid. We thought of the colonnade—the 3D extrusion of the dotted line in space. This temporary monument would be built of scaffolding columns that signal its temporality and leave open the arches for people to pass in times of necessity, yet always acting as a visual symbol.

The project was shortlisted in top 50 out of 440 projects.


The impact of Pandemic Architecture competition on the international architectural community was astonishing, with the number of registrations to exceed 800, with the final proposals to exceed 400 and with participants from more than 60 different countries.
Results were officially announced on the 25th of September.

Check out the open call and the jury here!

Metaverse as a Business Opportunity for Architects

at MEGARON MOUSIKISArchisearchhttps://www.archisearch.gr/wp-content/uploads/prodexpo_luxury_has_become_tiresome-15-370x533.jpg
SHARE THIS PAGE
WITH YOUR FRIENDS