ERGON, designed by Urban Soul Project,  is the new chapter in the 2000-year old story of Greek culture and food, built on the ruins of the city’s ancient marketplace, at the foot of the Acropolis.

Situated at the foot of the Acropolis in the historical heart of Athens, Ergon House is a seventh heaven for food enthusiasts, complete with ‘rooms above the inn’.
ERGON Athens is the second ‘Agora’ concept store, but this time in Athens.

Ergon House sits on Mitropoleos street, in the heart of Athens, on the ground floor of a 4-storey building, that has a listed two storey façade and four storeys of newbuilt addition in the 90’s. In total, the Ergon house is a one-stop shop where gastronomy and hospitality meet. Restaurant and deli store facilities are taking place on the ground floor, that expands partially in the atrium that is formed between old and new facade and partially on the rest of the double height core floor. 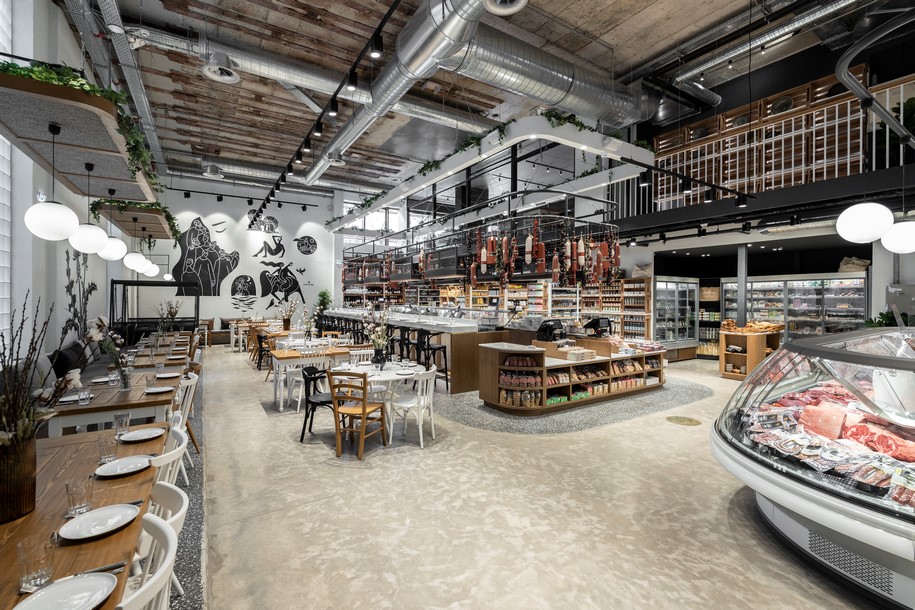 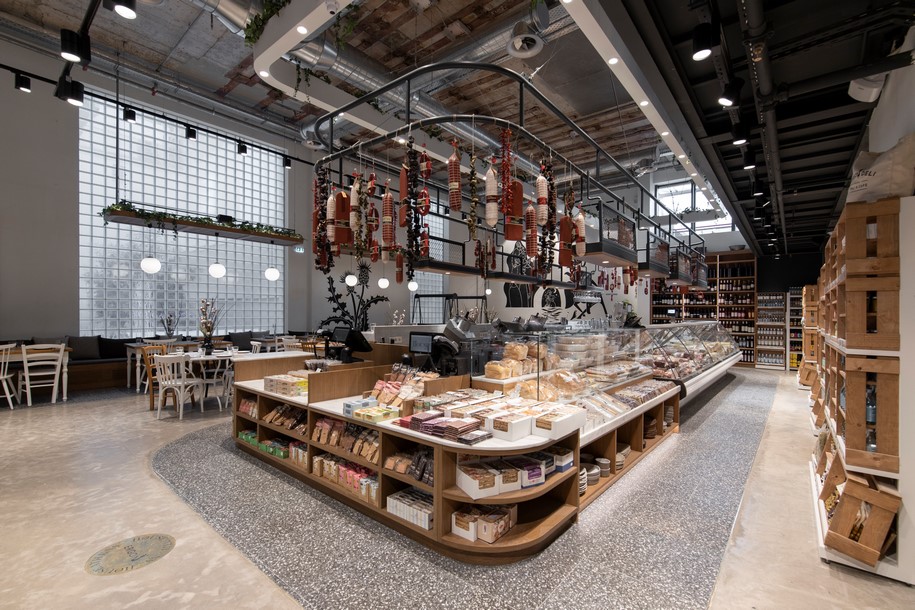 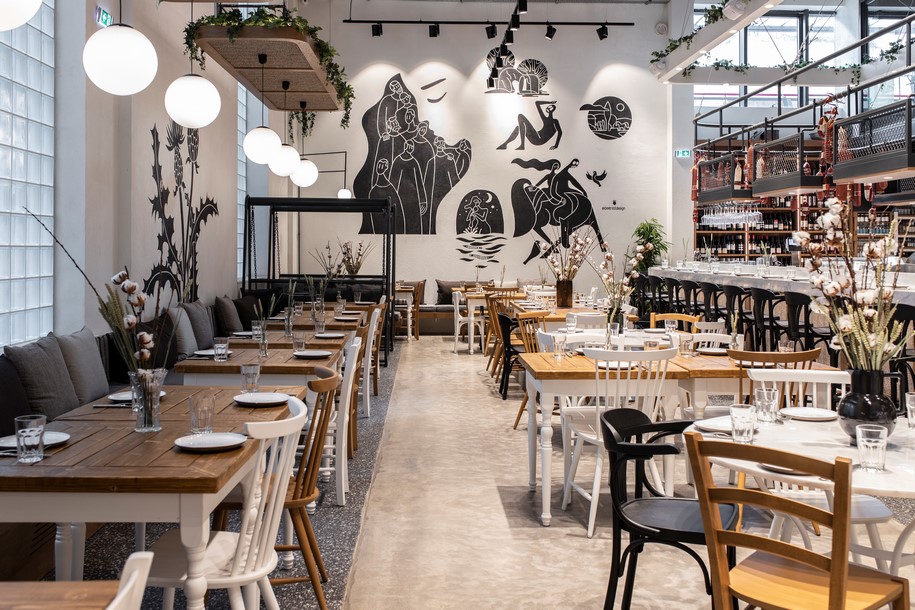 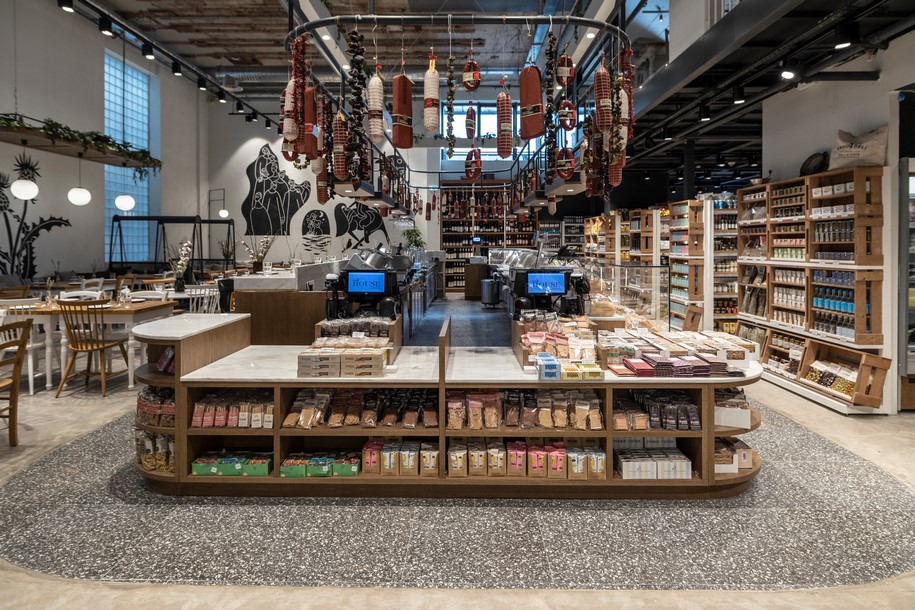 Ergon is the Greek word for vocation, the process of passionate work, and the sense of accomplishment that follows it. 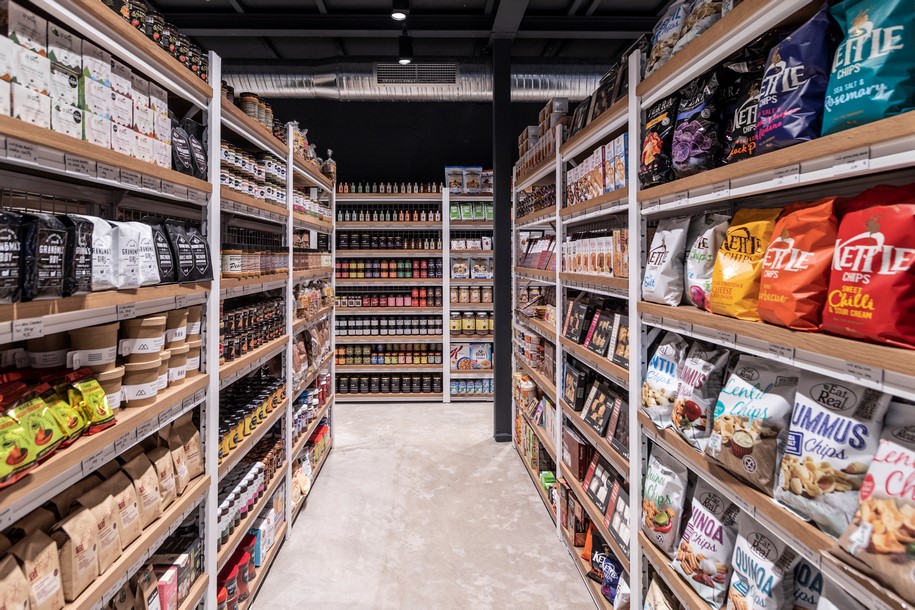 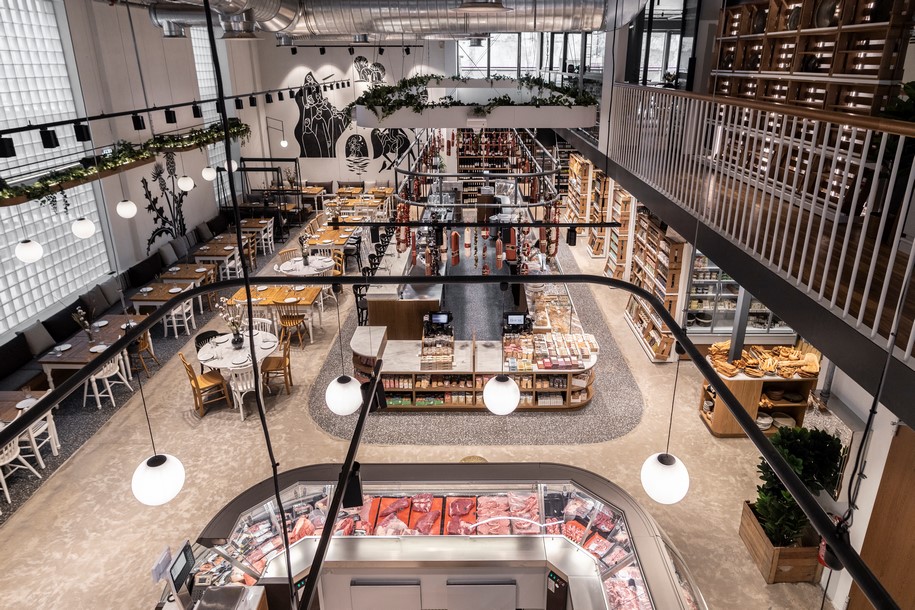 The atrium’ s floor is the interior courtyard that houses the fresh groceries, the café, the open oven and the olive tree in the middle, around which all are arrayed. The avli is paved with concrete blocks, whereas on one the side we find a vertical garden, and on the other a street graffiti by INO.
Entering the second part, the double height creates a magnificent feeling of warmth, with the central unit of the bar, the grocer’s, the fishmonger and the butchery right in the middle. Around that, multiple seating areas are found, with marble, wood and fabrics giving the traditional colors of a Greek village piazza. 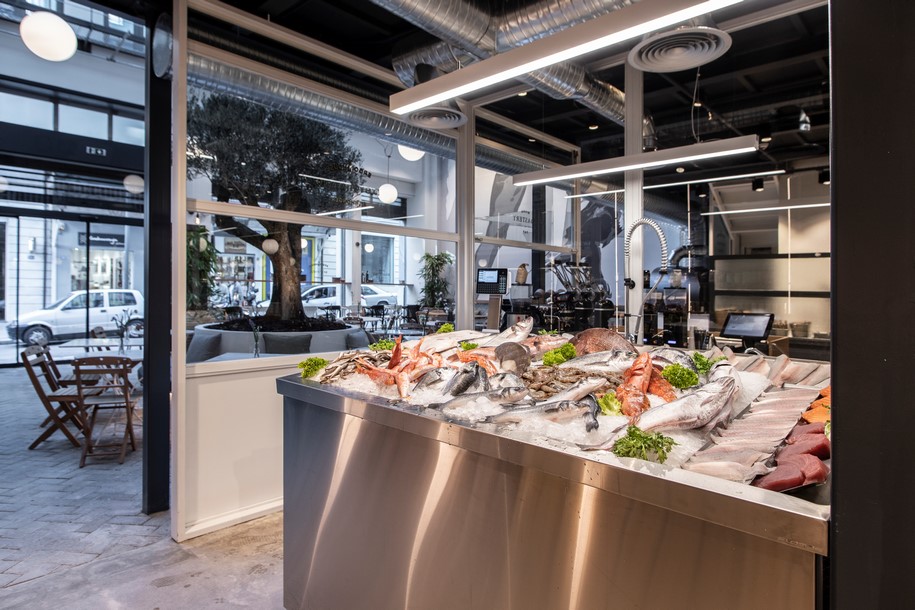 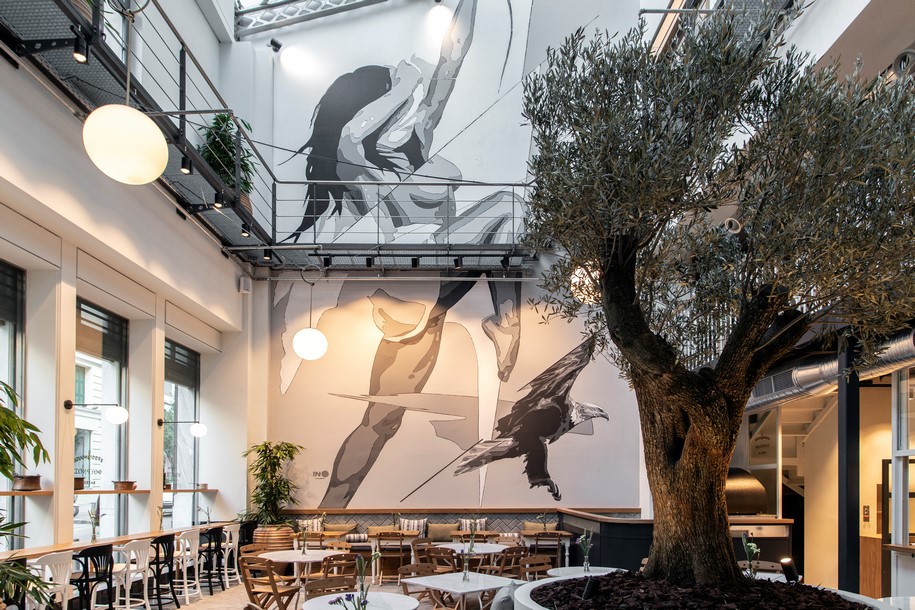 The aim for Urban Sould Project was to introduce us into a new way of living in downtown Athens such as sitting around an olivetree to enjoy our food, coffee or drink, right in the heart of Athens. 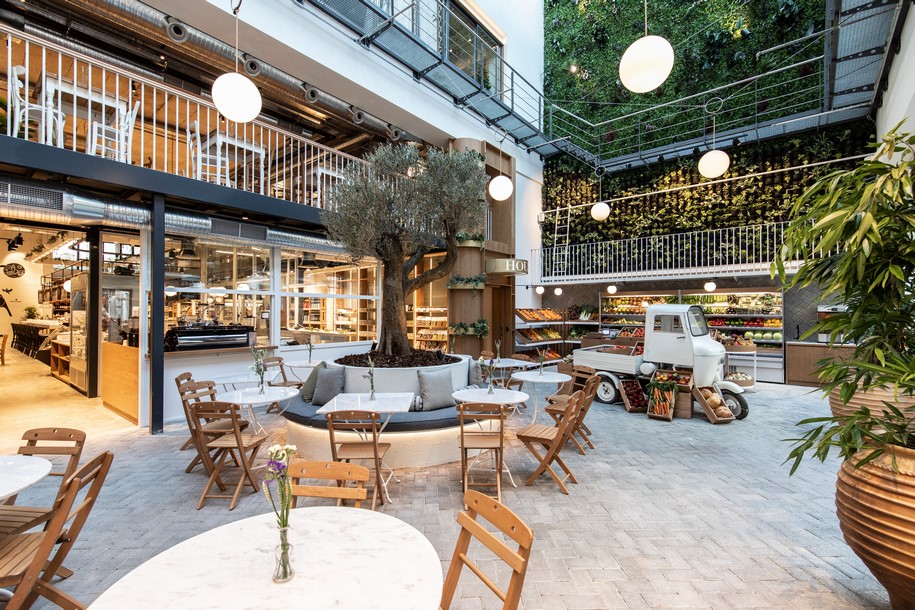 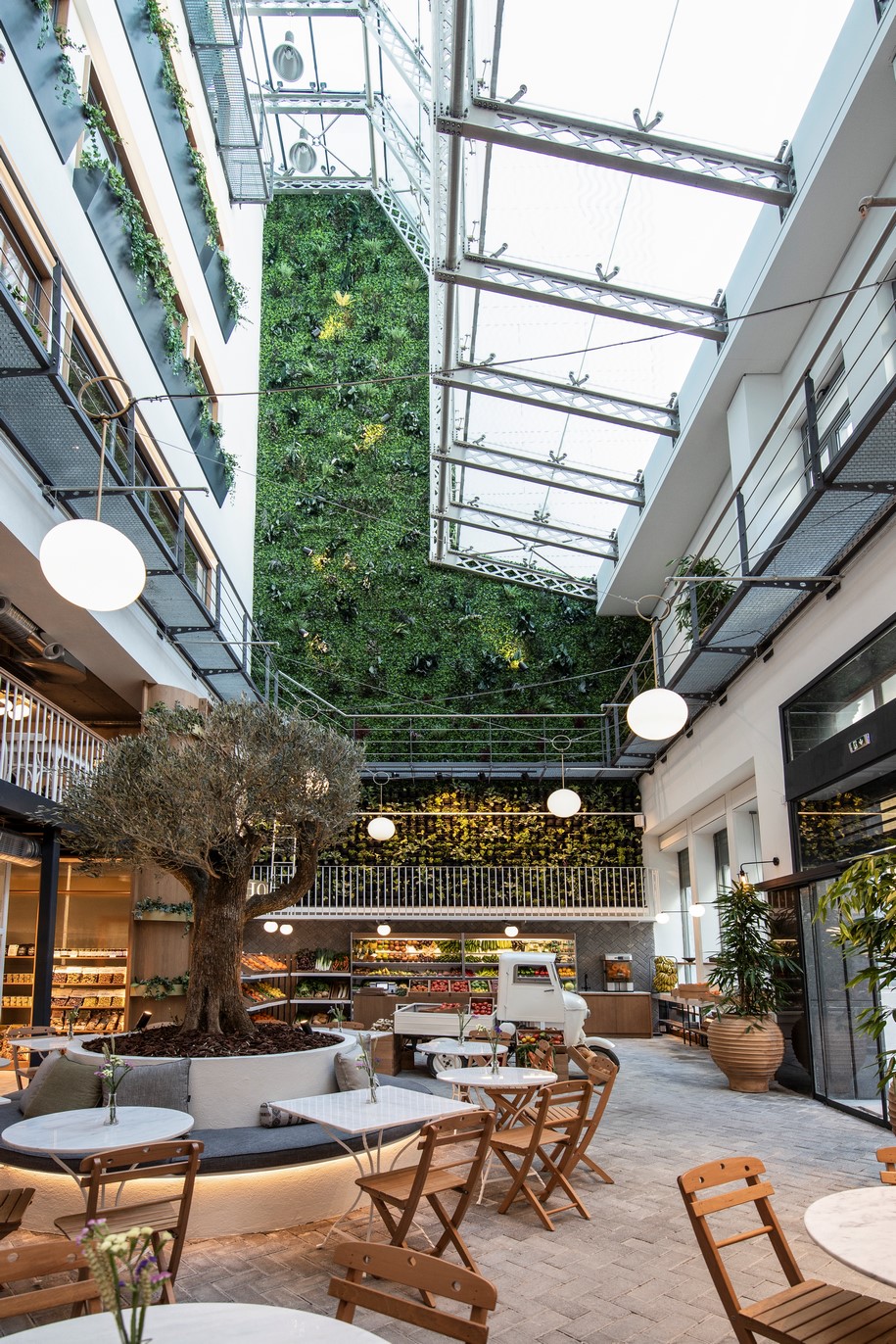 The concept of the contemporary Greek city and its materiality during the last few decades become alive by using walnut timber, black terrazzo and marble from Kozani.
The materiality of the Greek city is present in the finishes, as walnut, terrazzo, concrete blocks and floors are found within the interior of the store.
This hotel’s biggest challenge was to combine traditional Greek architecture along with needs of the modern gastronomy-oriented traveller. 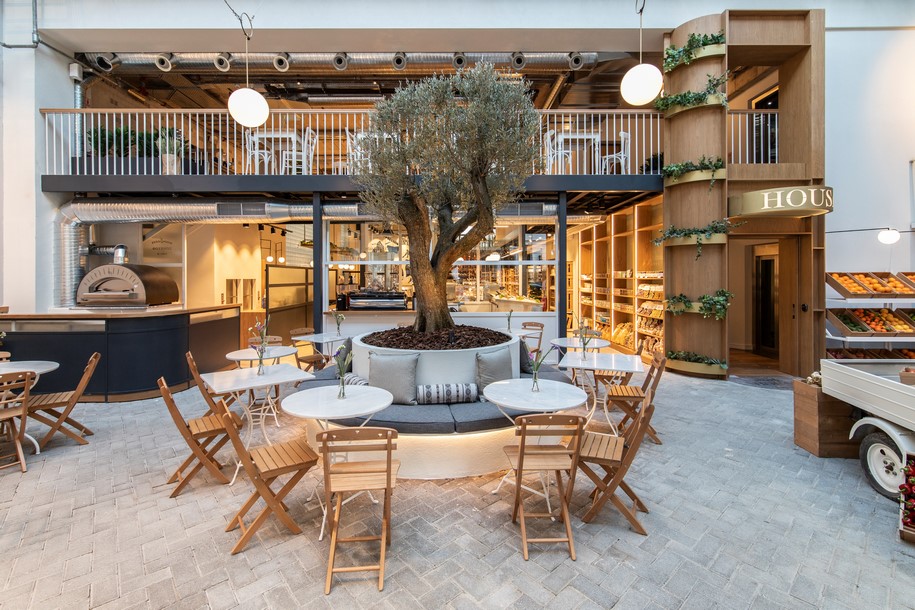 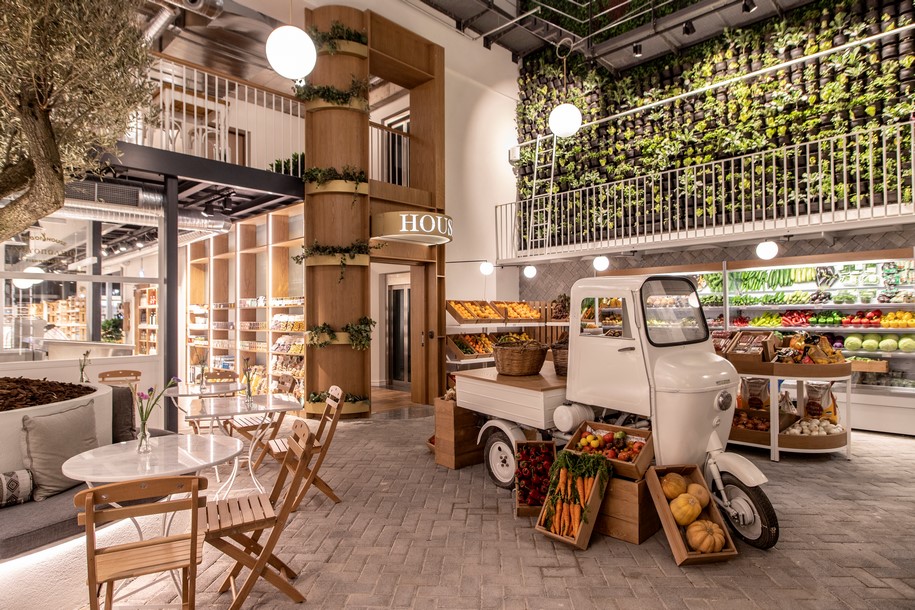 An open market, but also a place which represents the actual meaning of the word, “a gathering place”. 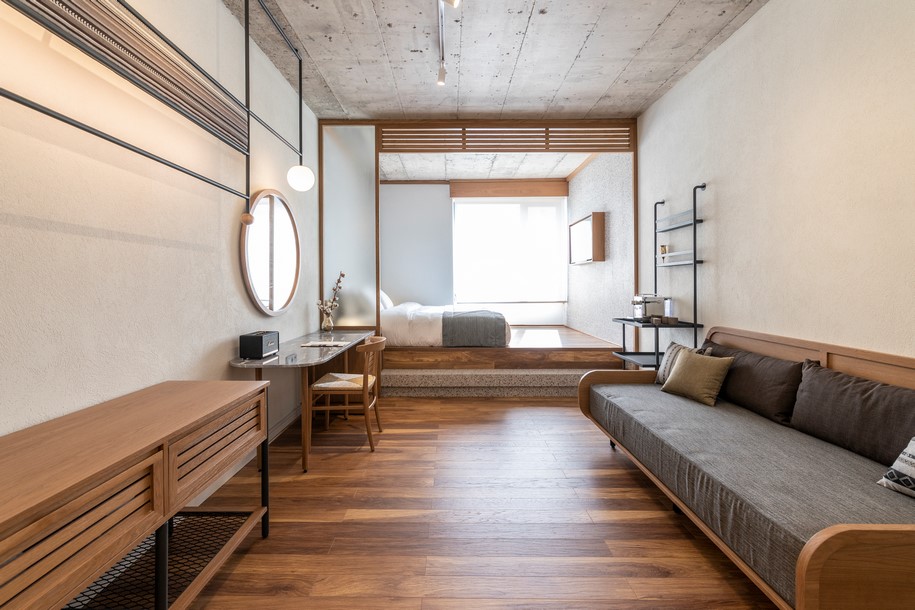 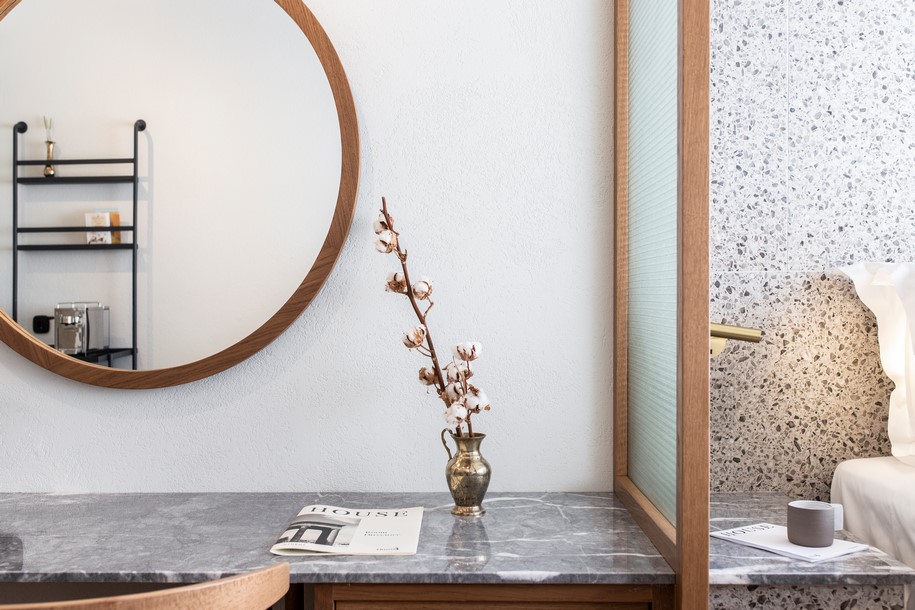 The entrance of the hotel is revealed after one has crossed the atrium. The rooms have an interior facade looking at the atrium and a back looking at the Acropolis.
Working with a rectangular shape of the typical floor, the rooms are arrayed around central common spaces such as the lobby, the shared kitchens and the fitness room. In a rectangular room, the bed is placed towards the one end of the room next to the window view. The room is arranged in three zones; the entrance through the wet areas, the sitting area with the desk and a bench and an elevated large open sleep area.
The reception is located on the first floor along with the lounge area with a wide view to the 25 meters atrium with the courtyard and the entrance in Mitropoleos street on the ground floor. 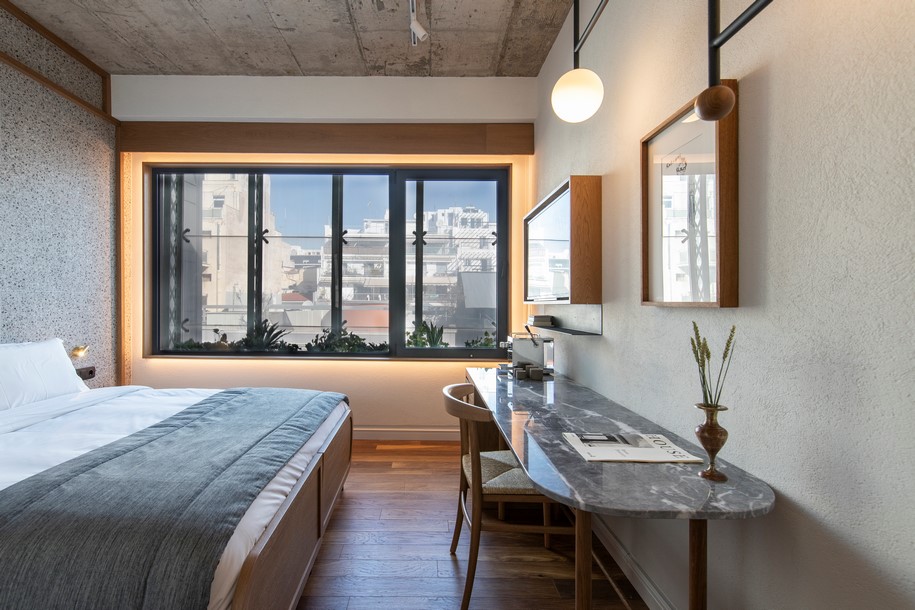 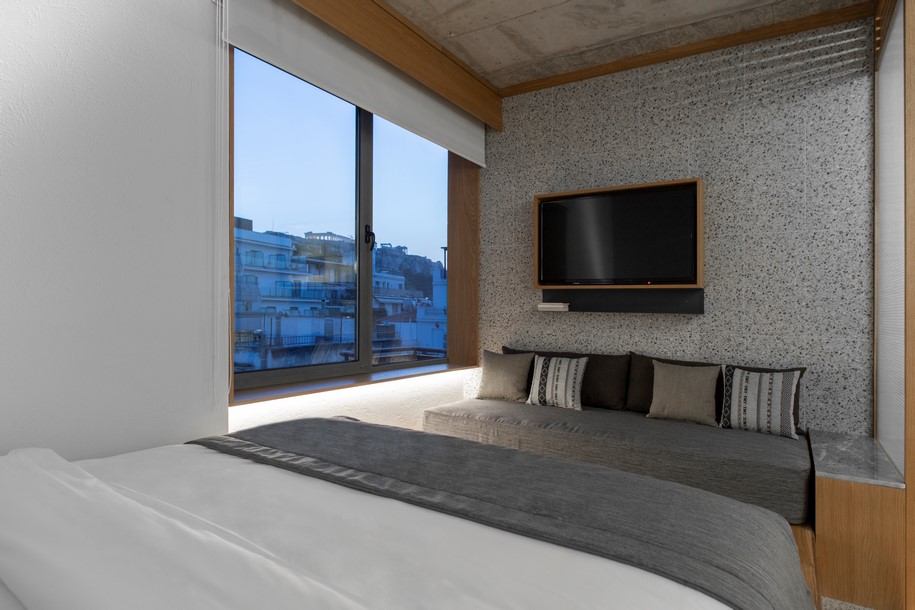 “We’ve conceived a spectacular marketplace, a modern-day Agora with a constellation of greengrocers, a butcher’s, fishmonger’s and bakery, a delicatessen and roastery, along with a bar and restaurant which celebrate the best of Greek cuisine culture”, tell us the owners and founders of ERGON.

The unique experience of an epicurean boutique hotel is expanded by creating cool common ground, a gym for good conscience, as well as a roof terrace planted with olive trees that has unbeatable views of the city. 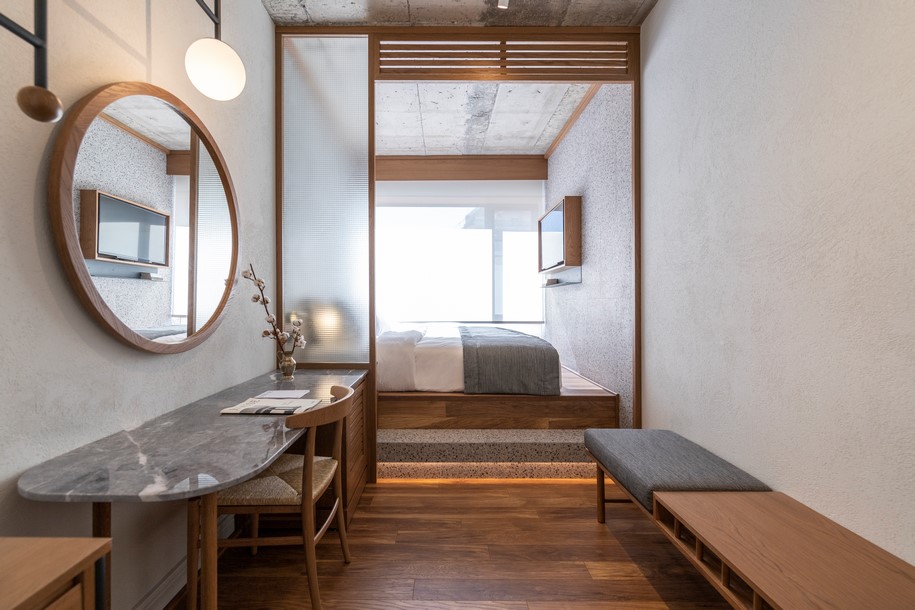 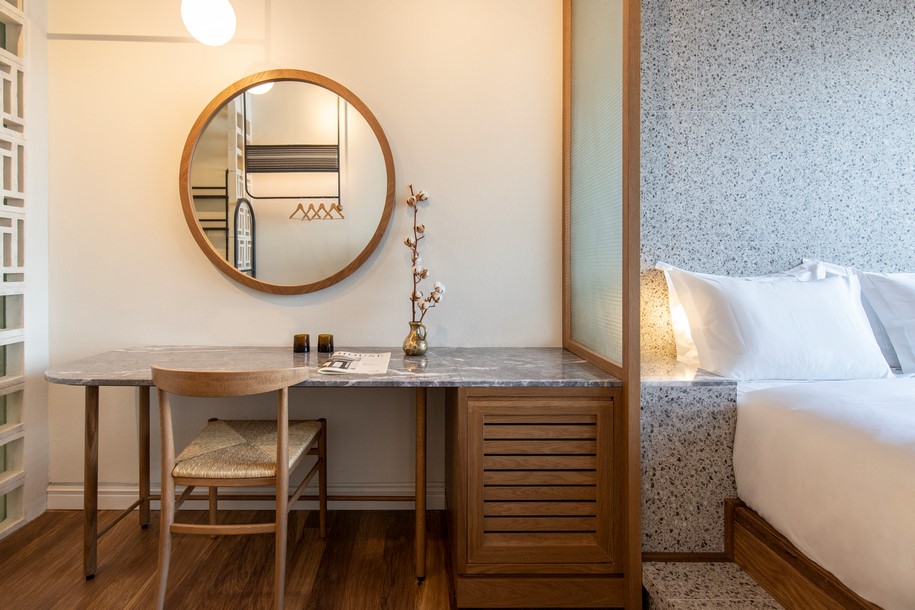 The interior design spins around traditional Greek architecture; the beds echo the old bunk bed style, while the decorative cinder blocks refer to the entrances and lobbies of downtown Athens multi-storey buildings of the 60’s. Old marble steps were hewed and transformed to basins. In the tapestry above the sink and the wardrobes, woven loom textiles are used as a decorative element. The contrast of colour in each space is achieved by using off-white paint on the walls, as found traditionally in whitewashed buildings, and timber elements made of walnut, a tree found all around the country, while natural brass details add a sense of old-fashioned luxury in the rooms.

The terrazzo, a durable material used since 1930, is now making a comeback in Greek architecture due to its timelessness and can be found both on horizontal and vertical surfaces in Ergon House. 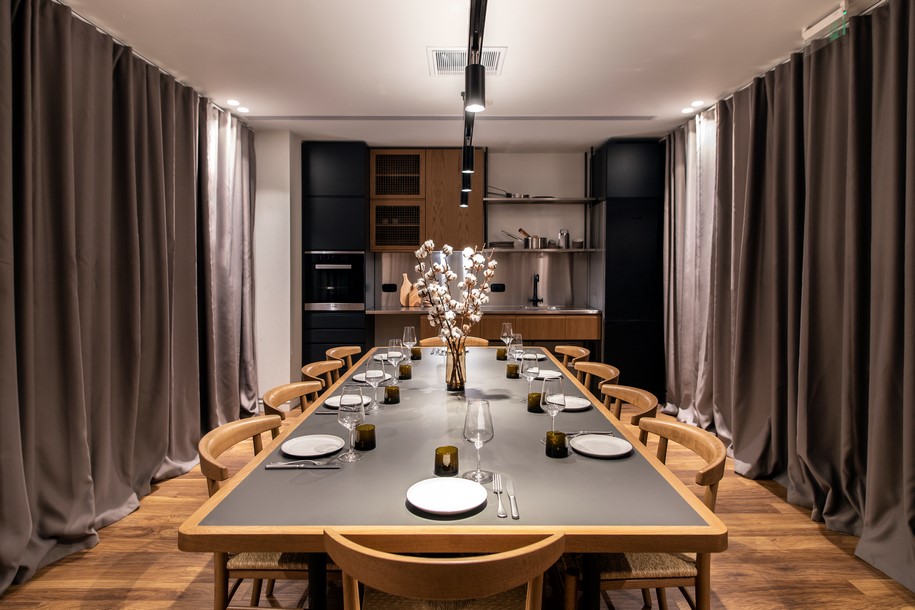 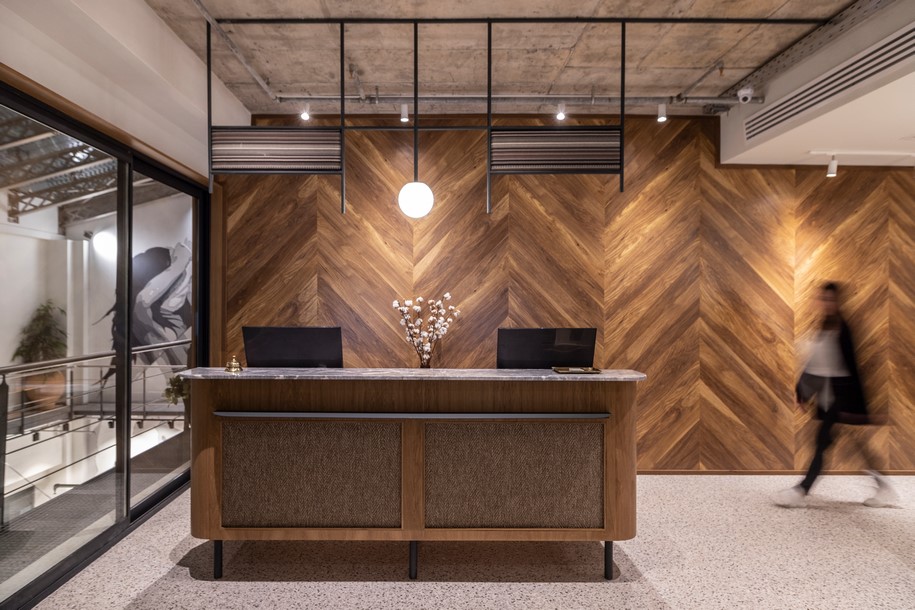