A new gateway to the centre of Bressanone (Italy), a small city in South Tyrol, is the latest addition to the Bressanone-Varna Ring Road. The infrastructural landscape project designed by MoDusArchitects is composed of a series of connected, largely underground roads that reduce traffic volume and provide an alternate route around both city centres.

The newly opened central juncture tract of the ring road is the section of the project that reconnects with the main thoroughfare of the SS12 in proximity to Bressanone city centre. Travelling from the ring road, motorists navigate a roundabout and pass through a short U-shaped tunnel along with its two, respective exposed concrete portals to arrive at a shifted axis with Via Roma – the main road leading directly into town.

The sculptural mouth of the new portal facing east takes a sinuous form that contributes to the lexicon of curvilinear elements that characterize many of the design interventions of the original project, steering away from the strictly technical or functional vocabulary typically offered by infrastructural projects.

“Civil engineering projects provide a unique opportunity to bring together the different scales – and at times jarring specificities – of infrastructure, landscape, architecture and urban decorum.  The Ring Road project underlines the reciprocity of these disciplines as a singular design challenge, not just given the environmental and economic impact of these projects, but also as a model for small cities grappling with questions of mobility, heritage and placemaking” – affirms architect Sandy Attia, co-founder of MoDusArchitects.

The other half of the founding duo, Matteo Scagnol continues: “The role architects play in large infrastructural projects has been increasingly marginalized over the past few decades in Italy: the country’s remarkable density and stratification of historical and natural contexts present unique and pressing challenges that the public administration needs to address. The Ring Road in South Tyrol is borne of deliberate, decision-making processes that comprehend the importance of design at every scale and as such created the conditions necessary for a cross-disciplinary collaboration to occur”.

First inaugurated in 2012, the 5km-long ring road that bypasses the historic city centre of Bressanone, to reach the north of Varna, was planned in an effort to avoid congestion, to reduce pollution, and to facilitate access from the north to the southern light industrial of the town. The design brief called for a series of interventions (tunnel portals, retaining walls, acoustic barriers, service substations, mechanical structures, ventilation chimneys, and various signage elements) along its entire length, and is guided by three simple design decisions. Firstly, the architects sought to minimize the environmental impact of the elements above ground in order to express both an architectural and technical quality. Secondly, these elements and those below ground were conceptualized into a unified, consequential design approach, and were calibrated to accommodate the particularities of the immediate site conditions. Lastly, the Bressanone and Varna tracts were pulled together into one continuum whereby the two townships are no longer conceived as distinct contexts but as two parts of a greater whole. 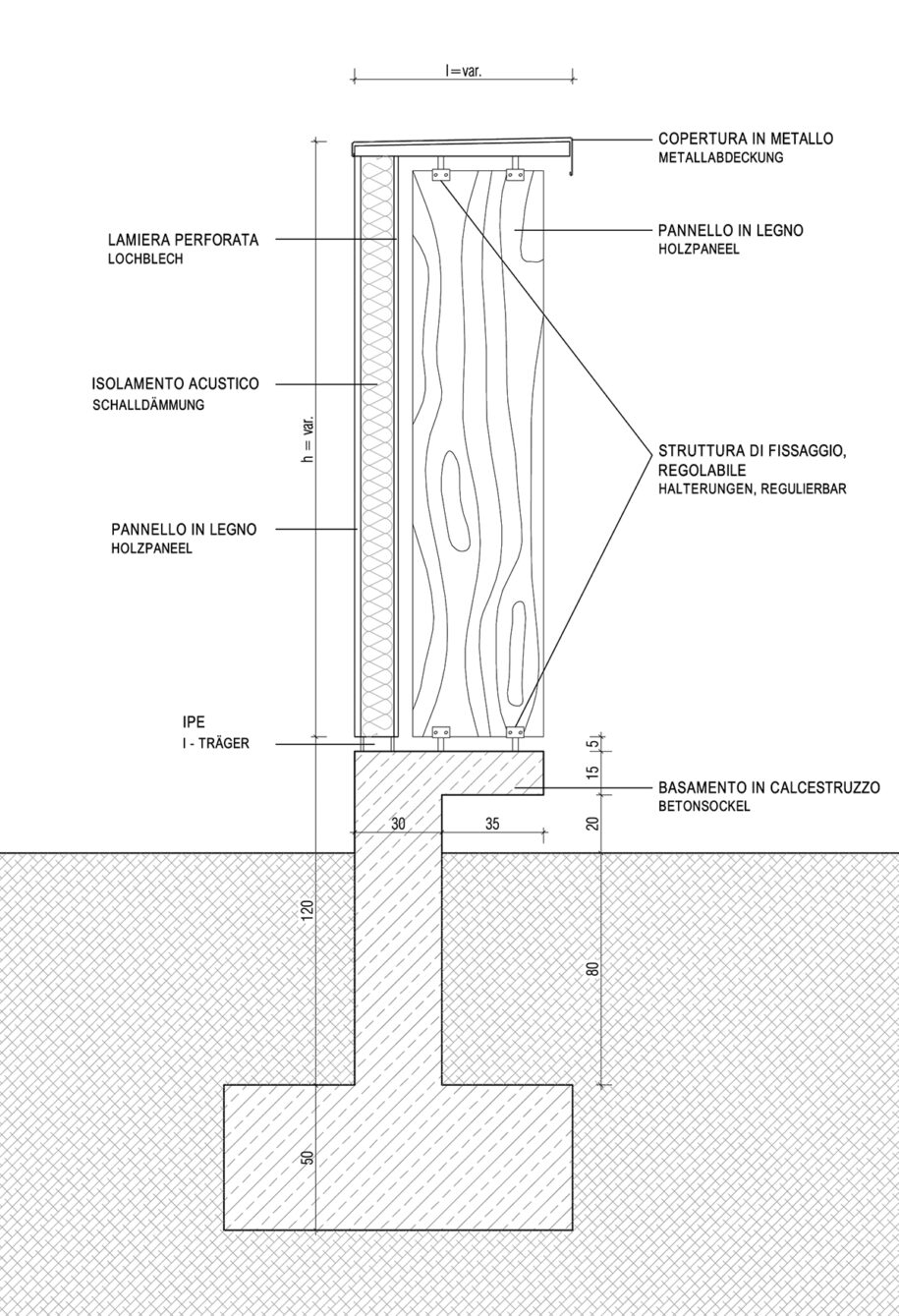 The project presents an inventory of complementary elements integral to the system of tunnels—as new entries, the central junction tunnel portals have been conceived as expressive figures whose raised heads emerge from the buried, unseen networks of roads serving as mediators of the disparate speeds and scales of the stratified urban context.

The concrete work of the new addition is made of aggregates and excavation materials drawn from the ongoing construction site of the 64km Brenner Base Tunnel traversing below the Alps from Innsbruck (Austria) to Fortezza (Italy). 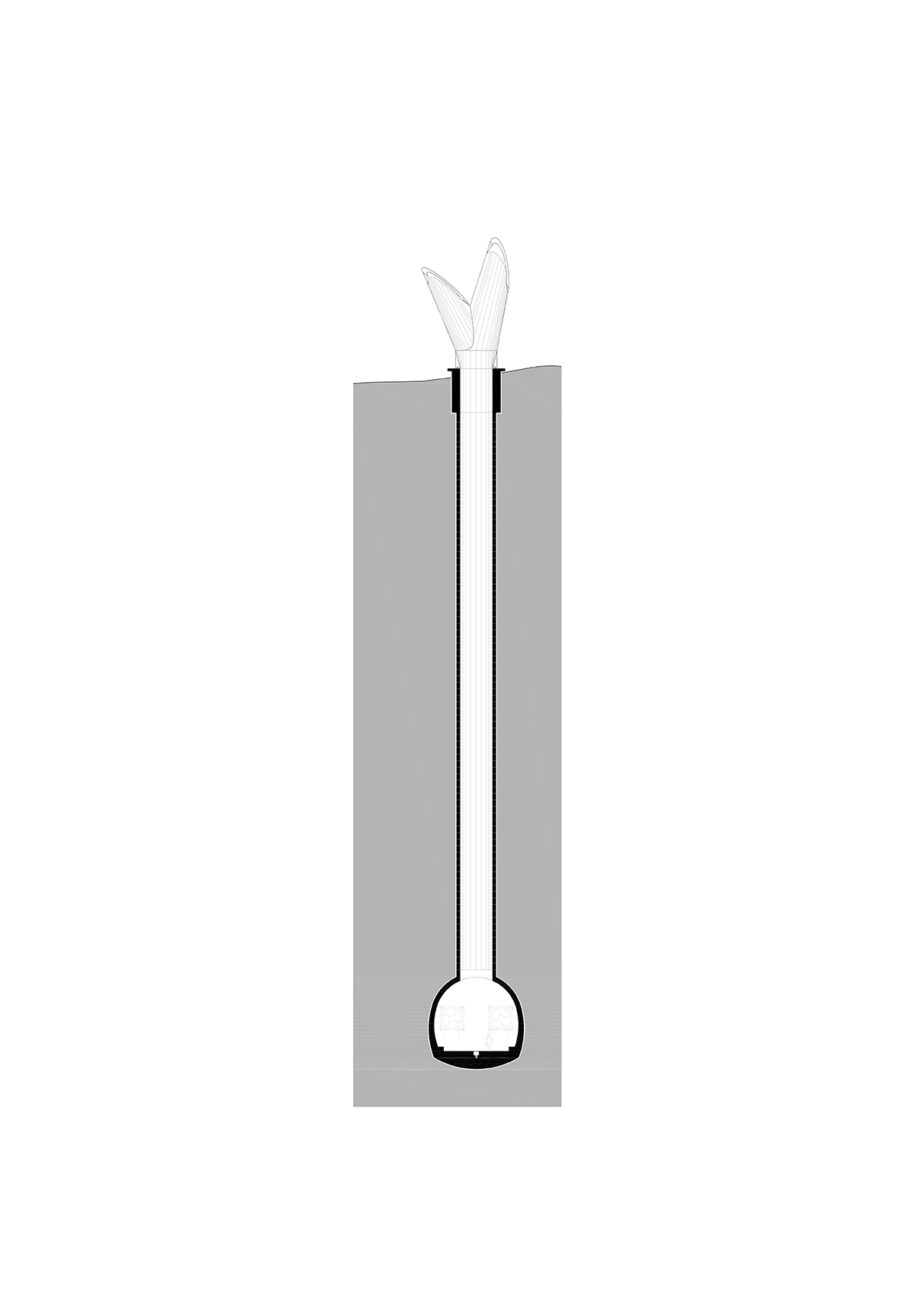 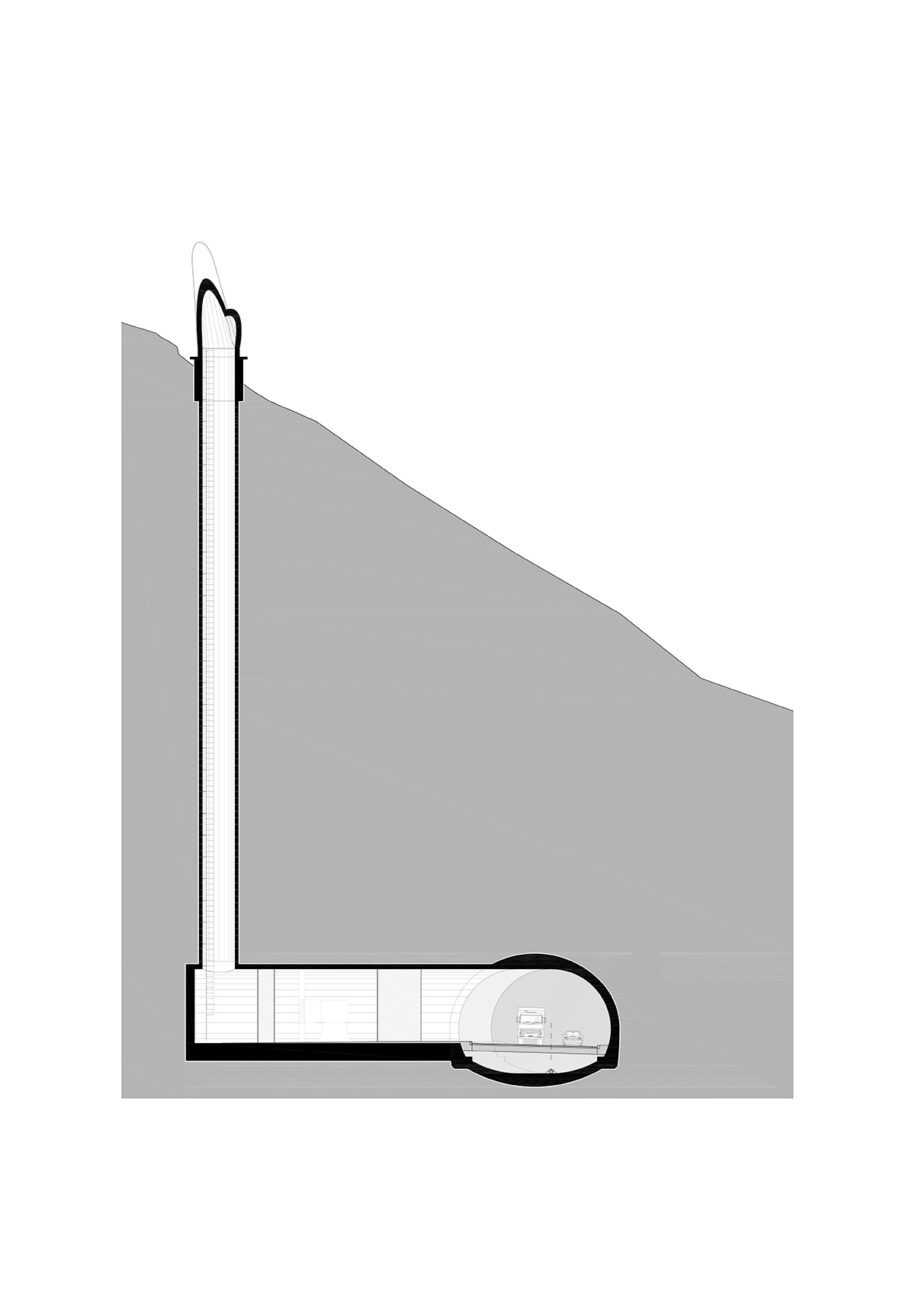 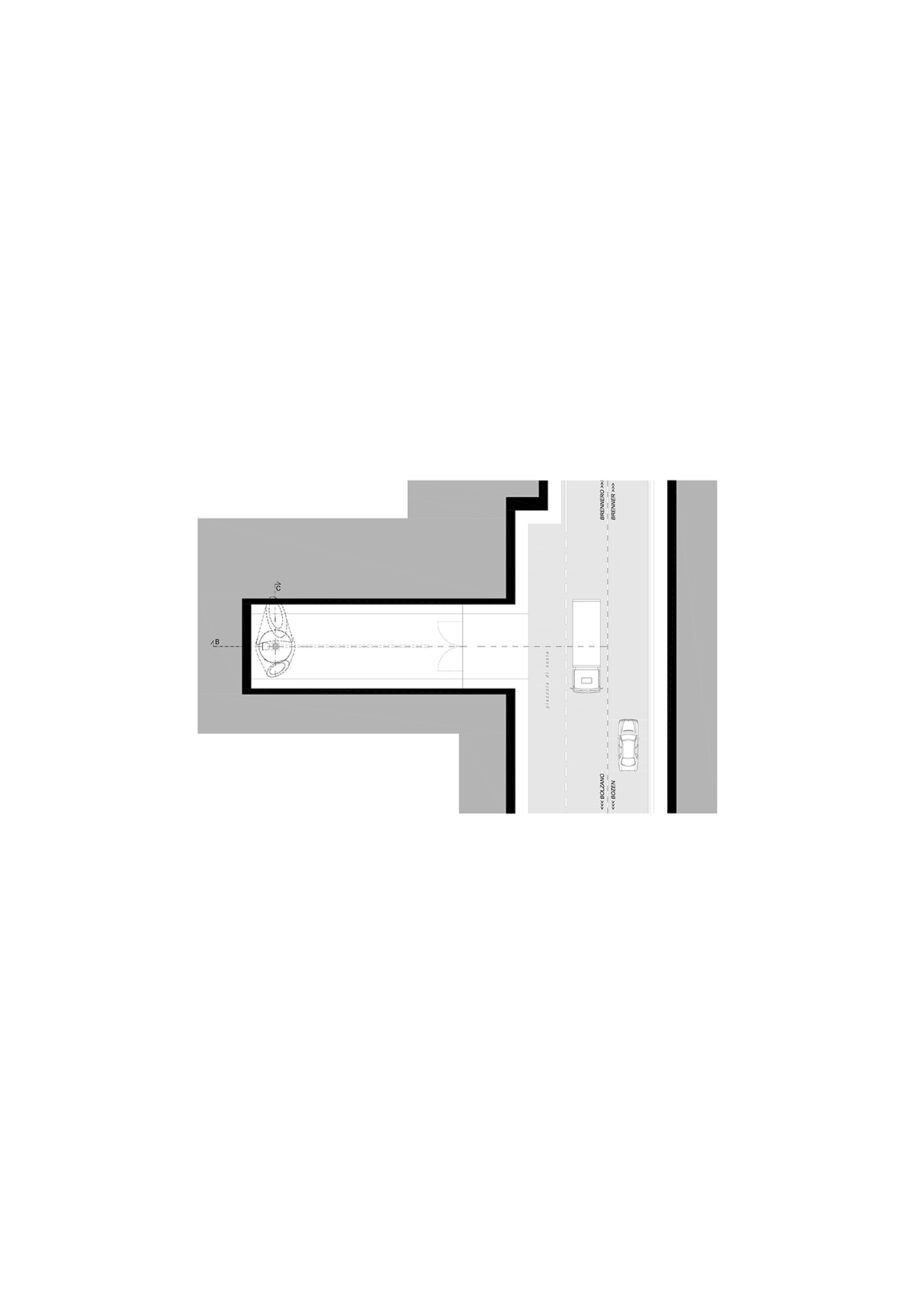 Together with exposed concrete, larch wooden acoustic barrier walls and cor-ten steel ventilation chimneys, the portals constitute important sites of architectural design: they lie at the intersection of landscape, infrastructure and mobility. 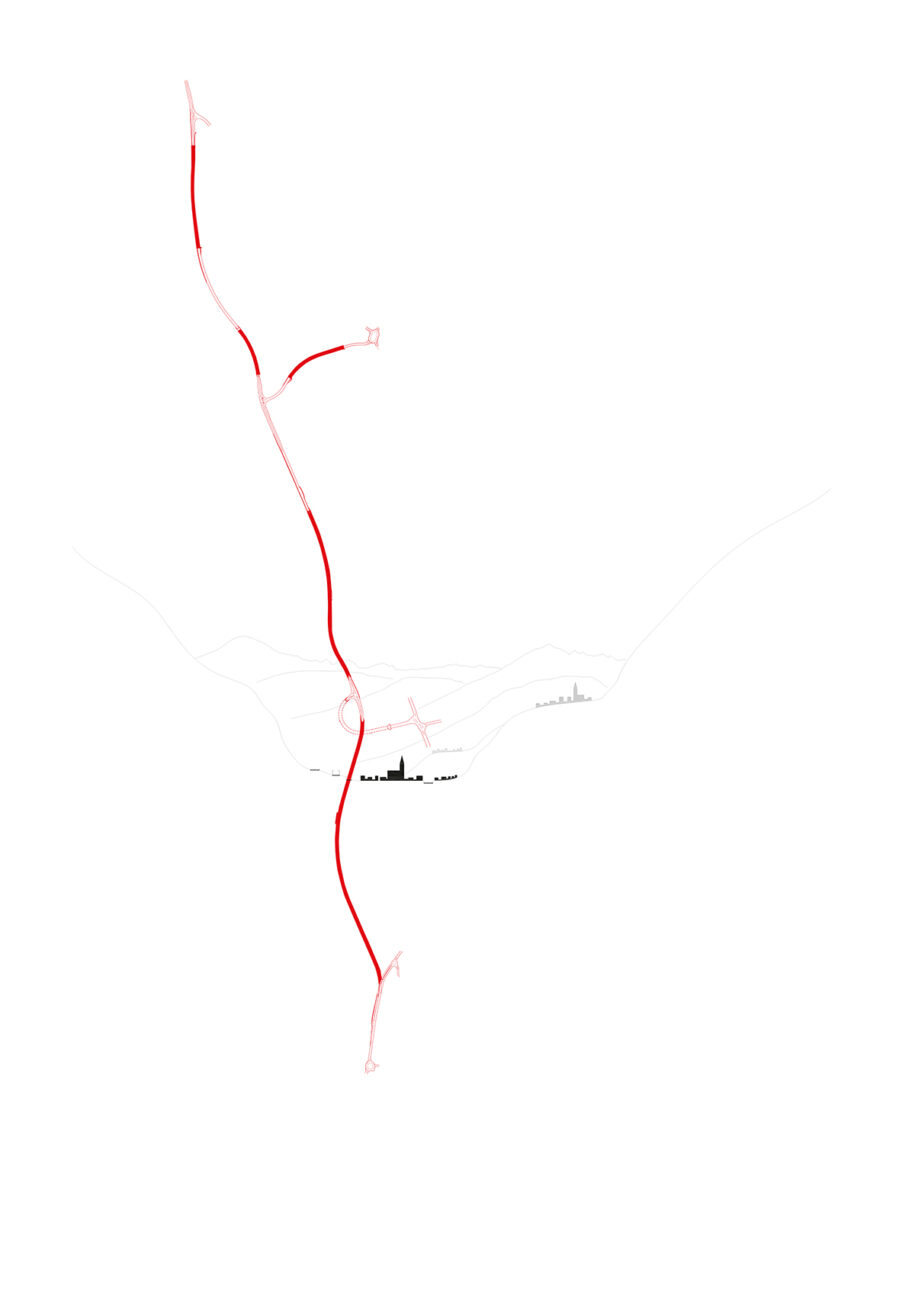 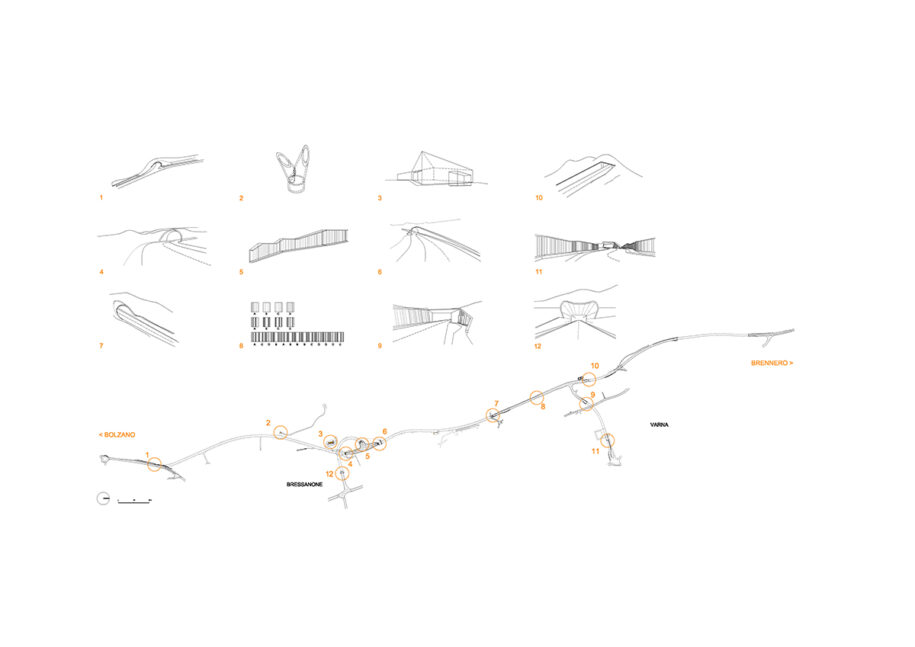 These interventions mark the threshold between below ground and above ground,  becoming part of the urban landscape of Bressanone, and also defining the fleeting, motorist experience. MoDusArchitects paid particular attention to noise emissions and many of the interventions, such as the Leca-beton walls, grappled with sound absorption solutions. 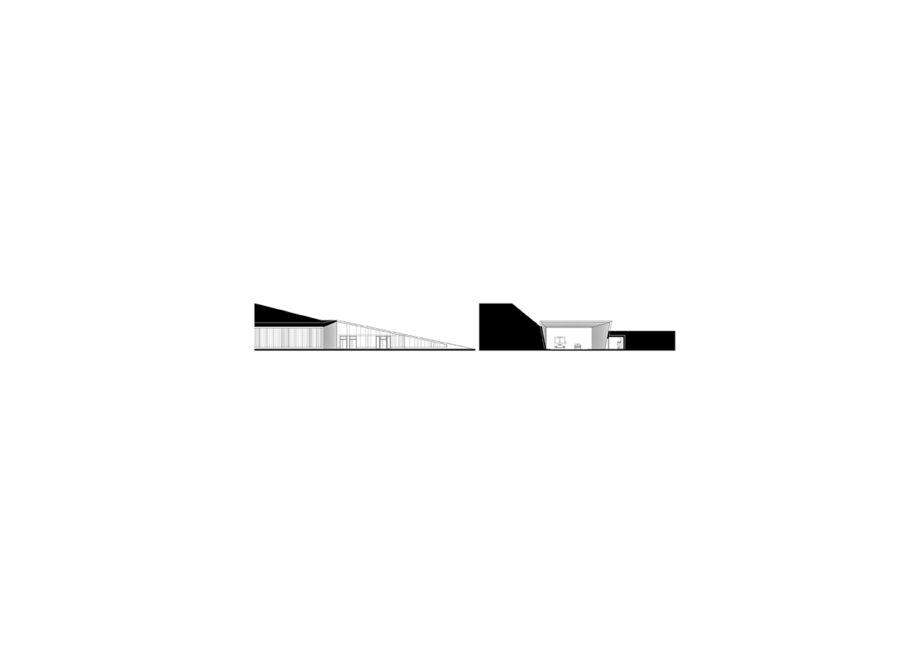 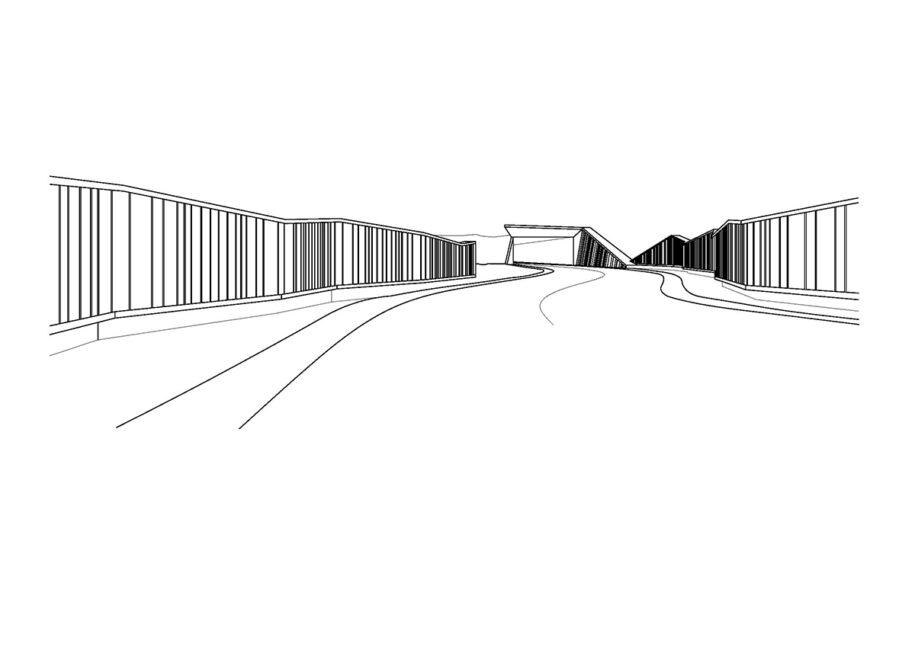 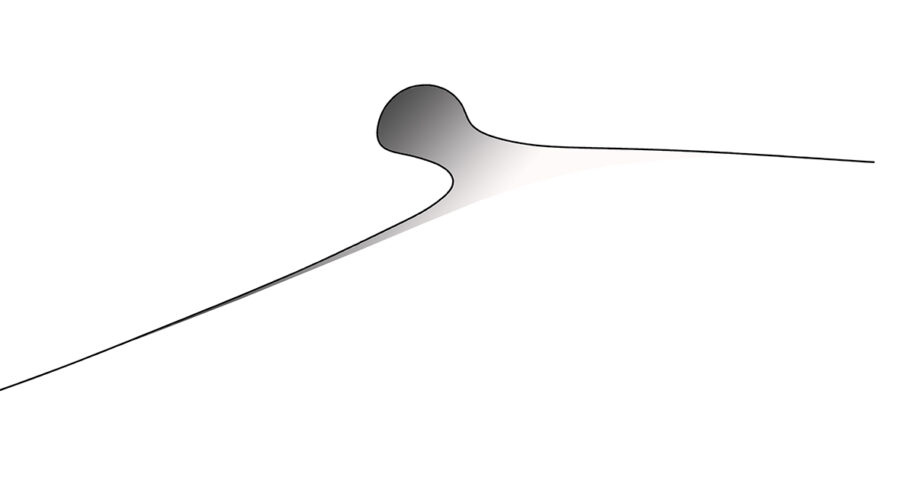 Research into the reconfiguration of commonly used materials in the road-building industry unearthed solutions to better address these environmental concerns while exploring new ways to combine simple, low-cost materials that could bridge the gap in scale and overcome the difficulties inherent to building in close proximity to the small scale buildings of Bressanone. 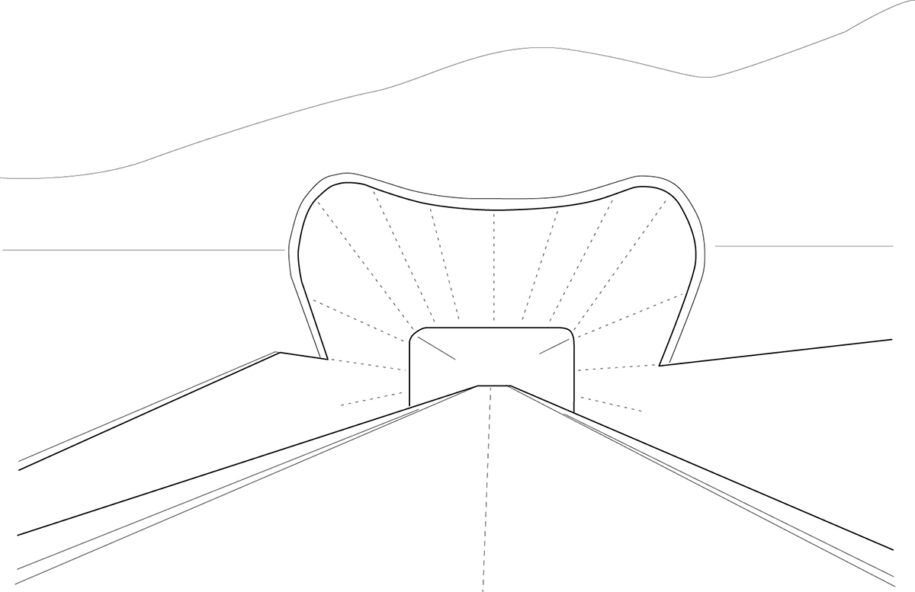 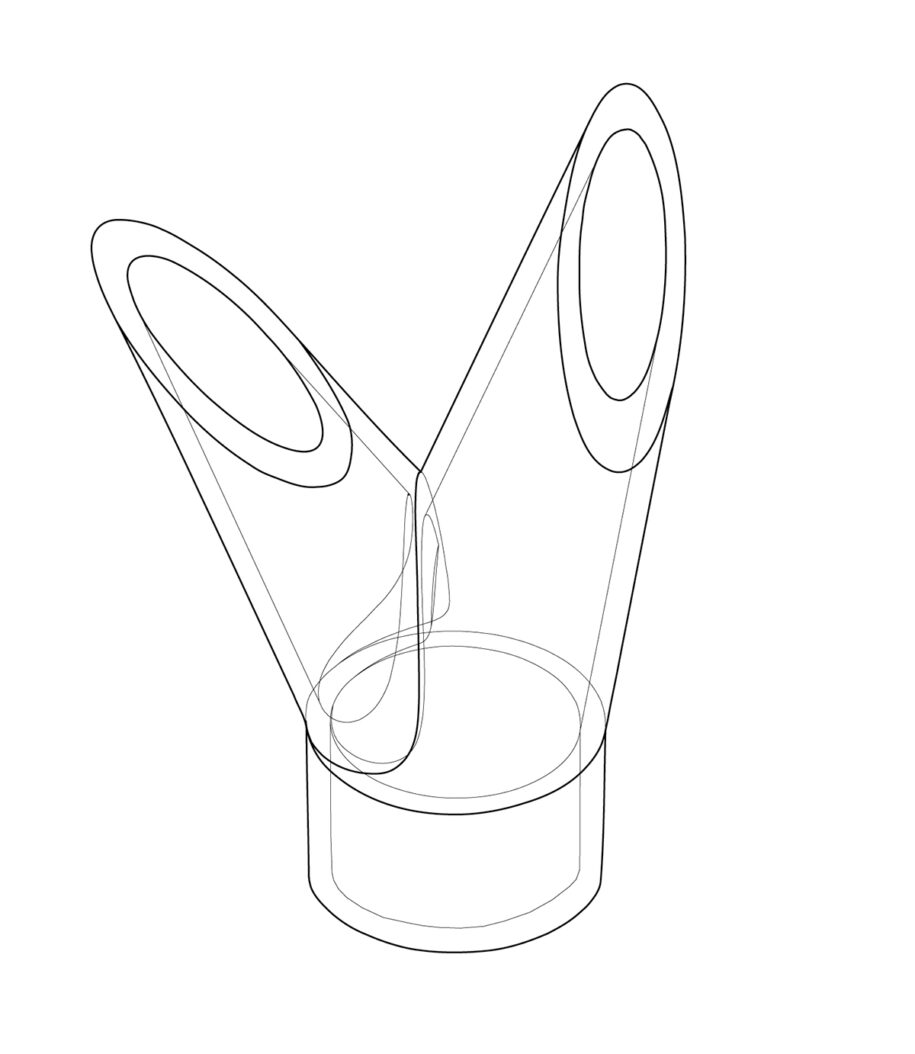 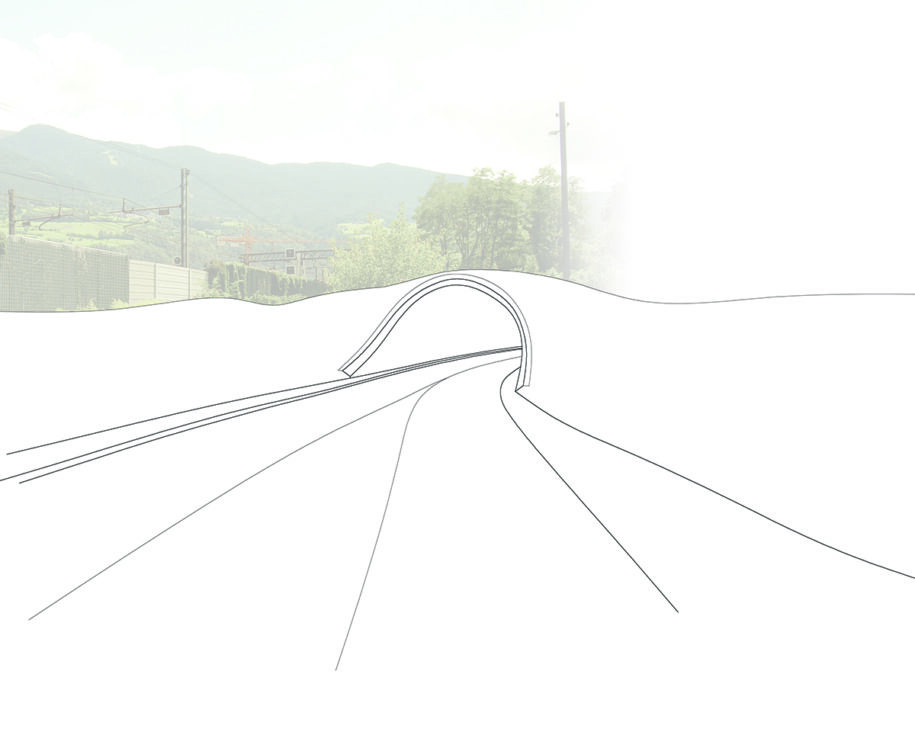 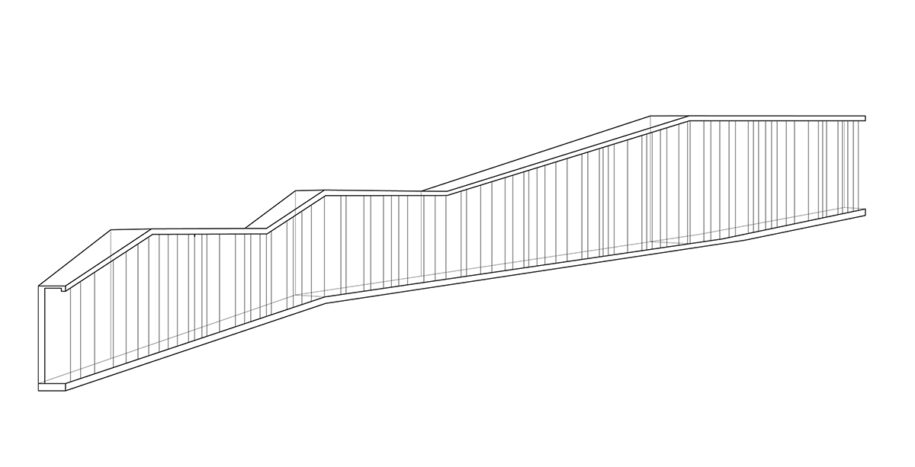 The next and final segment of the ring road, projected to be completed in 2025, will extend the intervention to its final trajectory past the city centre of Varna for a total length of 8km. 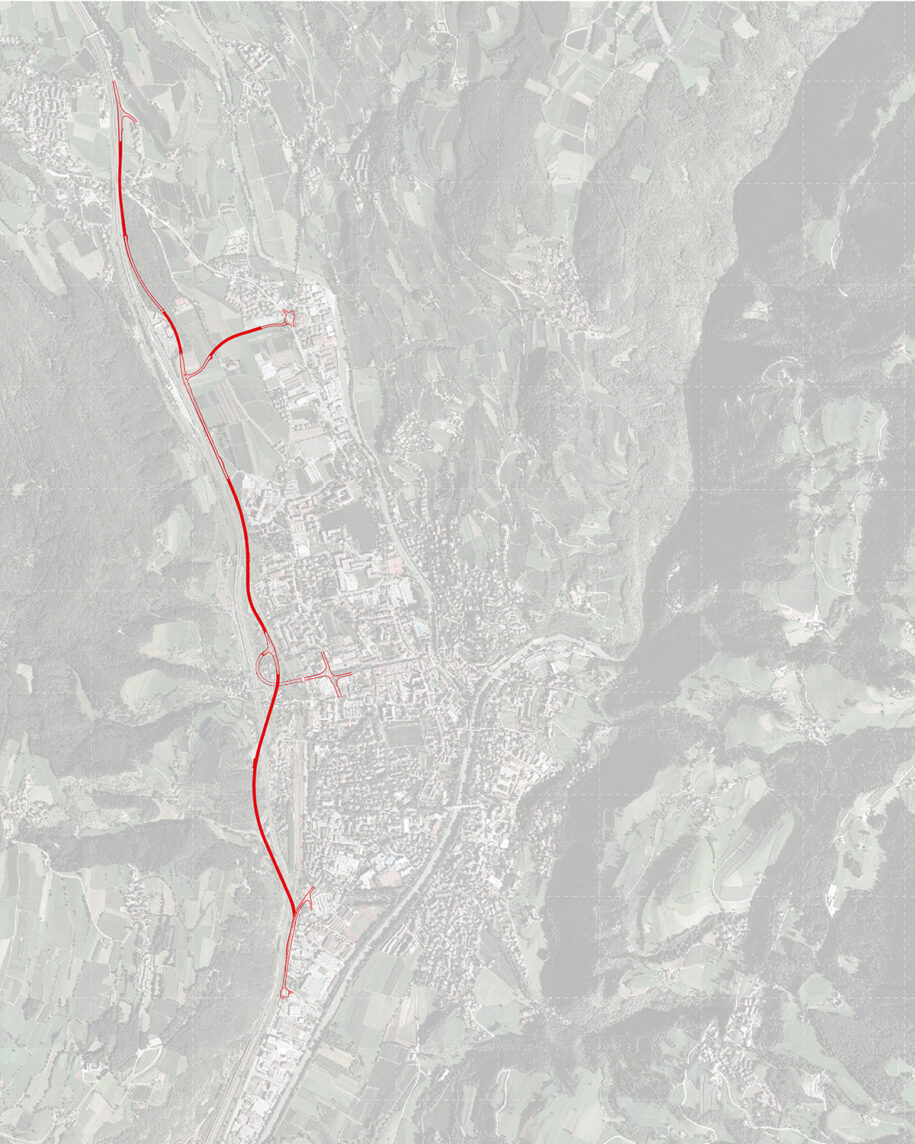 MoDusArchitects was founded by Sandy Attia (Cairo, 1974) and Matteo Scagnol (Trieste, 1968) in 2000. The studio distinguishes itself within the international architectural panorama by the bold and heterogenous body of work that intertwines the founding partners’ two different formative and cultural backgrounds.

Since its inception, MoDusArchitects addresses multiple topics, scales and programs – from infrastructure to school buildings – and pursues a design process that holds steadfast the relationship between ideas and buildings. The projects are careful studies of the places and contexts in within which they are situated to produce surprising architectural vocabularies that combine an approach that is both intuitive and grounded in the tectonics of the architectural discipline.

Completed works include the Ponte di Ghiaccio Mountain Lodge, the Psychiatric Rehabilitation Centre, the School Campus in the Firmian district of Bolzano, the Bressanone-Varna Ring Road, the Kostner House and Studio, the new Damiani Holz&Ko Office Addition and the Tourist Visitor’s Center Building in Bressanone (TreeHugger).

MoDusArchitects’ work has been recognized with a number of important awards: the jury’s special prize at the Premio Architetto Italiano 2013, honourable mentions for the Gold Medal in Italian Architecture (2015, 2012), first prize for the International Piranesi Award 2013, Best Architects (2013, 2018, 2019), the German Design Council’s Iconic Award (2012, 2019) and a nomination for the Mies van der Rohe Award 2015. Several projects have been included in the Triennale di Milano in 2012 e 2015, the Venice Architecture Biennale in 2010, 2012, 2014 and 2018 within the Italian Pavilion. The Kostner House and Studio project together withthe Damiani Holz&Ko Office Building project are part of the MAXXI Museum’s permanent collection in Rome.

Matteo Scagnol and Sandy Attia flank their professional work with their academic roles at Princeton University’s School of Architecture (USA).

by ELPIDA ROIDOUArchisearchhttps://www.archisearch.gr/wp-content/uploads/Mitsaion-17-cover-e1600677248343-370x700.jpg
SHARE THIS PAGE
WITH YOUR FRIENDS