Fjordenhus (Fjord House), the first building by Olafur Eliasson and Sebastian Behmann with Studio Olafur Eliasson, opens on 9 June in Vejle, Denmark. Commissioned by KIRK KAPITAL, the company’s new headquarters offer a contemporary interpretation of the idea of the total work of art, incorporating remarkable site-specific artworks by Eliasson with specially designed furniture and lighting.

Rising out of the water, Fjordenhus forges a striking new connection between Vejle Fjord and the city centre of Vejle—one of Jutland peninsula’s thriving economic hubs. As one moves from the train station towards the harbour, Fjordenhus comes into view across the expansive plaza of the manmade Havneøen (The Harbour Island), a mixed-use residential and commercial area currently in development. From here, residents and visitors can access the ground floor of Fjordenhus via a footbridge or stroll along the jetty designed by landscape architect Günther Vogt.

The building’s public, double-height entrance level is dedicated to the relation of the building to the water, drawing attention to the plane where the structure plunges beneath the surface, its curved edges framing glimpses of the surrounding shores and harbour. The building is permeated by the
harbour itself, and its two aqueous zones are visible from viewing platforms. Both the architectural spaces and Eliasson’s artworks engage in a dialogue with the ever-changing surface of the water.

Formed by four intersecting cylinders, Fjordenhus soars to a height of twenty-eight metres (ninetytwo feet). Rounded negative volumes have been carved from its facades of custom-glazed brick to create an extraordinary architectural statement of complex curved, circular, and elliptical forms, torqueing walls and parabolic arches. In its unique setting—a hybrid of natural and industrialurban contexts—the building highlights Vejle’s future as a centre not just for today’s generation but also for generations to come.

Olafur Eliasson notes, ‘I am very thankful for the trust shown by the Kirk Johansen family in inviting me, with my studio, to conceive Fjordenhus. This allowed us to turn years of research—on perception, physical movement, light, nature, and the experience of space—into a building that is at once a total work of art and a fully functional architectural structure. In the design team, we experimented from early on with how to create an organic building that would respond to the ebb and flow of the tides, to the shimmering surface of the water, changing at different times of the day and of the year. The curving walls of the building transform our perception of it as we move through its spaces. I hope the residents of Vejle will embrace Fjordenhus and identify with it as a new landmark for the harbour and their city.’

Fundamental to the concept of Fjordenhus is the notion that there is no one ideal position from which to view the building, says Olafur Eliasson.

The completion of Fjordenhus marks the shift of Studio Olafur Eliasson’s major architectural activities to a new international office for art and architecture, Studio Other Spaces (SOS), founded by Eliasson and his long-time collaborator, architect Sebastian Behmann, in Berlin in 2014. As an architectural counterpart to Studio Olafur Eliasson, Studio Other Spaces will be the vehicle for Eliasson and Behmann to carry out large-scale interdisciplinary and experimental architectural projects of a scope similar to Fjordenhus, in addition to works for public space. Projects are currently in development around the world, from Paris to Addis Ababa.

The basic form of Kirk Kapital’s headquarters was inspired by the harbour’s surrounding architecture.

Architect Sebastian Behmann, head of design at Studio Olafur Eliasson, says, ‘We carved precise volumes out of the building’s massive brick cylinders, subtracting the interior space out of the overall volume. These negative volumes form the elliptical cuts in the facade and act as independent spaces. The windows, normally seen as separating inside from outside, are a singular design feature of Fjordenhus. The vertical spaces within these soaring carved voids connect sky to water.’

Sebastian Behmann also adds that throughout the process, ‘we were very attentive to the choreography and sequencing of spaces, using modulation of light and acoustics to heighten all the building’s sensory aspects.

One experiences Fjordenhus as a sculptural presence in the harbour, an interaction of solids and voids.

These voids—the main points of interaction between inside and outside—are the major design element and form the parabolic, multi-story windows. Our clients grasped the value of devoting the ground story of the building, alongside the plaza with its jetty, to the experience of the building’s relation to its environment—and to the public.’

SETTING
Vejle Fjord in Jutland stretches east from its head at the city of Vejle to its mouth at the  Kattegat Sea. Fjordenhus stands in the water alongside Havneøen (The Harbour Island), a man-made  is- land that was developed in response to a concept by Vejle Municipality to revitalise the  harbour area, introducing important new residential components into a traditionally industrial  environ- ment. For those approaching from Vejle’s main urban axis, the building appears as the focal point, surrounded by water and with the Vejle Fjord Bridge in the background. The concrete  and cobble- stone surfaces of the expansive plaza in front of the building are echoed in the design of Günther Vogt’s jetty, while the cylindrical forms and distinctive brickwork of Fjordenhus nod to the historical harbour typologies of warehouses and silos. Set against the backdrop of the fjord, the building itself breaks the smooth plane of the water.

Accessible by footbridge, the twenty-eight-metre-high building is formed by four intersecting cylinders with brick facades from which ellipsoidal negative spaces were removed to create complex curved forms and arched windows.

The varying floor plans of the different levels are organised around circles and ellipses, with specially designed furniture and lights, and are connected by spiral staircases and round vestibules. The double-height ground floor, which is open to the public, is permeated by the fjord and contains two aqueous zones with site-specific artworks by Olafur Eliasson. The KIRK KAPITAL offices occupy the upper three floors. Perched atop the building is a green roof with vegetation and solar panels. By night, Fjordenhus is lit from within, resembling a lighthouse.

Classic Danish brick is the predominant material of the building’s inner and outer walls.

The brick forms the smallest possible building unit and follows the organic shape of the building. Fjorden- hus’s intricate brickwork shapes visitors’ impression of the building as they approach.
From afar, the building’s surface seems orderly, but upon closer inspection, the different shapes and slightly ir- regular staggering of the bricks’ depth reveals a lively, organic surface. The brickwork incorporates fifteen different tones of unglazed brick; additional colours of glazed bricks are integrated into the carved-out sections to produce colour fades – green from the bottom and blue from the top – that reflect the water and sky. In the stairwell, scattered silver bricks reflect the sunlight shining in from above. The bricks function not only aesthetically, but also technically: hollow ventilation bricks are placed throughout the walls to modulate both sound and temperature. Every corner, niche, and arc required an individual brick-laying solution; each brick was specially fit into the complex cur- vature of the concrete walls, the overall brickwork lying flush with the curved steel frames and glass elements of the facade.

The floors and ceilings of Fjordenhus are formed by white concrete slabs, creating spaces 3.2 metres in height on each level.

They conceal the distribution of technical infrastructure such as the heating and cooling systems. The grid pattern of cut-out negative circular volumes in the ceiling reduces the overall weight of the ceiling. These hollows also serve to hold light fixtures and modulate the acoustics of the space. Pietra Piasentina stone was used to cover all the floors. Unlike classic granite stones, Pietra Piasentina can only be found in boulders quarried from the
hills of Friuli, Italy. 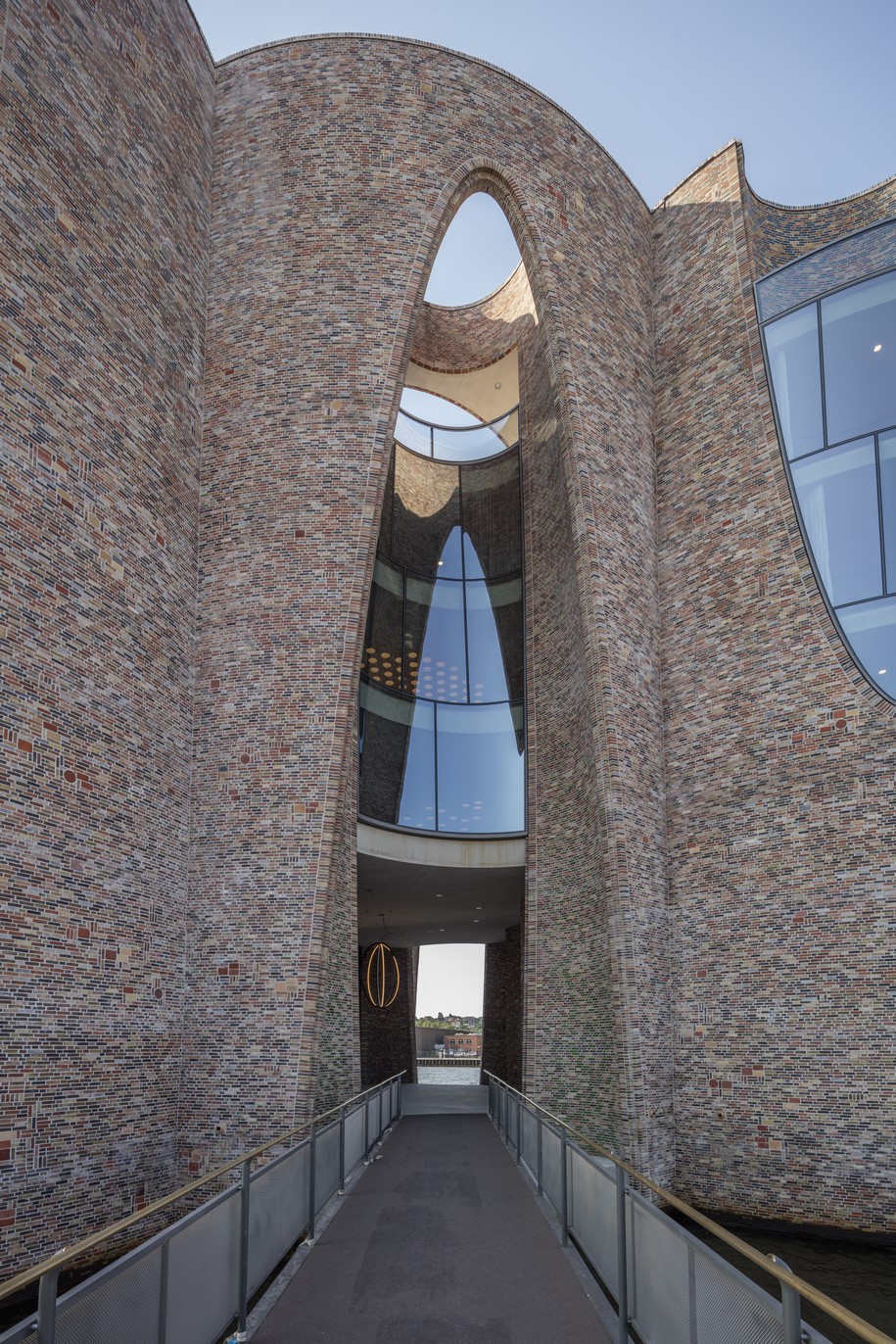 The lighting for the building has been custom-designed by Olafur Eliasson and Studio Olafur Eliasson, while all the various spaces throughout Fjordenhus contain unique artworks by Olafur Eliasson. These installations span the publically-accessible water spaces and ground floor of Fjordenhus, as well as the other floors within.

The double-curved, 3D-formed windows precisely follow the geometry of Fjordenhus. Steel frames span several floors of the building, while the window voids form the main element of the facade. In some areas, rotating doors were introduced to accommodate the geometrical challenges of the building’s overall shape. All of the doors and windows are tilted; by design, the walls contain no right angles.

Olafur Eliasson underlines that ‘More relational than monumental, Fjordenhus is co-created by its shifting fjord context as well as by the people experiencing it. It makes you conscious of your own presence – conscious not only that you are seeing the building, but that the building is also seeing you.’

Sebastian Behmann notes that ‘Designing a structure of this scale and purpose was like developing characters in a play or novel; we considered the relation of the elements to each other, the setting, the overall story we wanted to tell. Now it is Fjordenhus itself that will carry the narrative into the future.’

Studio Other Spaces is an international office for art and architecture founded by artist Olafur Eliasson and architect Sebastian Behmann in Berlin in 2014. It grew out of Eliasson and Behmann’s work together on such projects as Fjordenhus in Vejle, Denmark (2009–18), and the facades of Harpa Reykjavik Concert Hall and Conference Centre, Iceland (2005–11). Studio Other Spaces pursues a research-based approach to the production of space that seeks to expand the established architectural vocabulary. By conceptualising spaces from their most fundamental level, the studio is able to disclose their utopian potential through innovative architectural forms.