Design research thesis by Elisavet Konstantinidou, Misbah Baig, Roshni Gera and Yunzhu Duan, entitled Orb[I]s, could refer to a singular unit, a system or ecology composed of thousands of individual units and is the assemblage of attributes that are envisioned to provide spatial and experiential infrastructure that will augment and aid Urban Change. 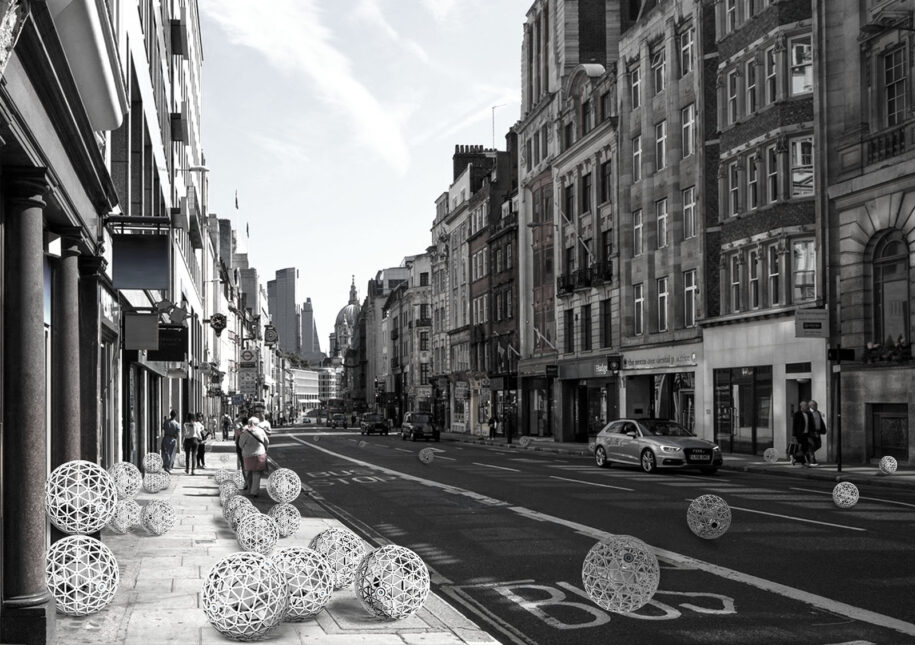 “Without culture, and the relative freedom it implies, society, even when perfect, is but a jungle. This is why any authentic creation is a gift to the Future.”, Albert Camus 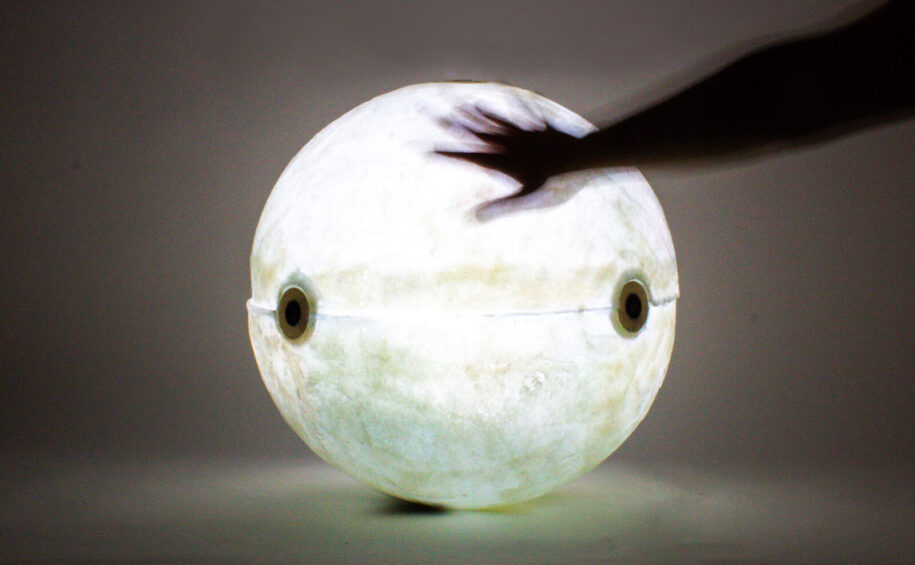 In order to address the Future of Culture, architecture must be explored through the lenses that look beyond static and conventional systems of infrastructure.

Orb[i]s is a Design Research Project aimed at addressing this constant change in the urban environment. It is a Prototypical System that is highly adaptive in nature, creating spatial infrastructure in the urban environment that will respond to the changing needs, numbers and development within the city, augmenting daily experiences and activities of its occupants. It is a behavioural assembly that opens up the possibilities of a dynamic environment that is not limited to a building plan, rather is autonomous, adaptable, dynamic and self–assembling based on real-time data culminating in a constantly reconfiguring ecology.

An incorporated sensory system encourages decision making within the system, making it self-aware. The self-assembling quality of the system arises from the ability of unit to unit communication through signals, which in turn leads to higher orders of organisations and structures. A single unit is designed with relation to the effect it would have on the overall system comprised of hundreds and thousands of such units.

These units could be looked at as intelligent building blocks that have the ability to analyse and make decisions. 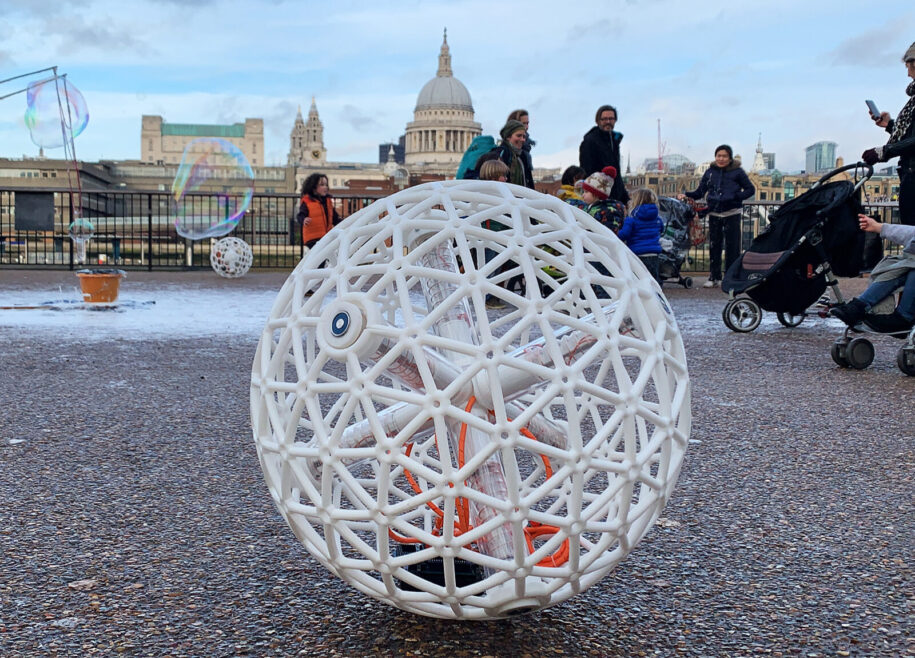 Each unit is designed with the ability to be mobile, sense and connect to other units. After a series of tests and experiments, the geometry finalised is a spheroidal unit, which has six telescopic legs within in, each having the ability to expand in six perpendicular directions from the centre of the sphere. Each of these “legs” has an electromagnet attached at the end of it with the ability to connect to six other units. On expansion, each of these legs has a controlled rotation to enable formations that break free from a rigid grid, further enhancing its adaptive nature. The highly adaptive nature of the system springs from these telescopic connections. With the potential of the system to expand to twice its volume by mere expansion of the connection between individual units, an immense amount of transformability is achieved overall.

The geometry of each individual unit has been designed in relation to the human scale, and the way in which they arrange themselves would enable their use as urban elements such as furniture, gathering spaces, shaded walkways, pavilions, etc. 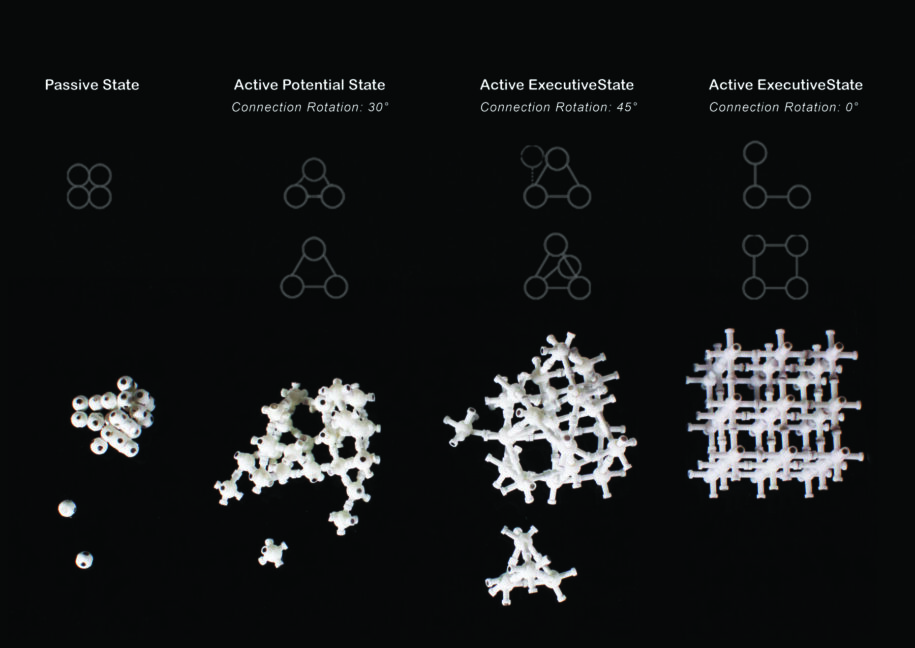 Upon coming together with other units, the system demonstrates collective intelligence and plethora of changing behaviours, providing a higher level of flexibility and adaptability. The intelligent aspect of the system moves beyond just conventional infrastructure and could contribute to more complex behaviours (stigmergy & flocking strategies) which could also be utilized in unconventional means such as crowd segregation/control, creation and indication of safe paths, etc. 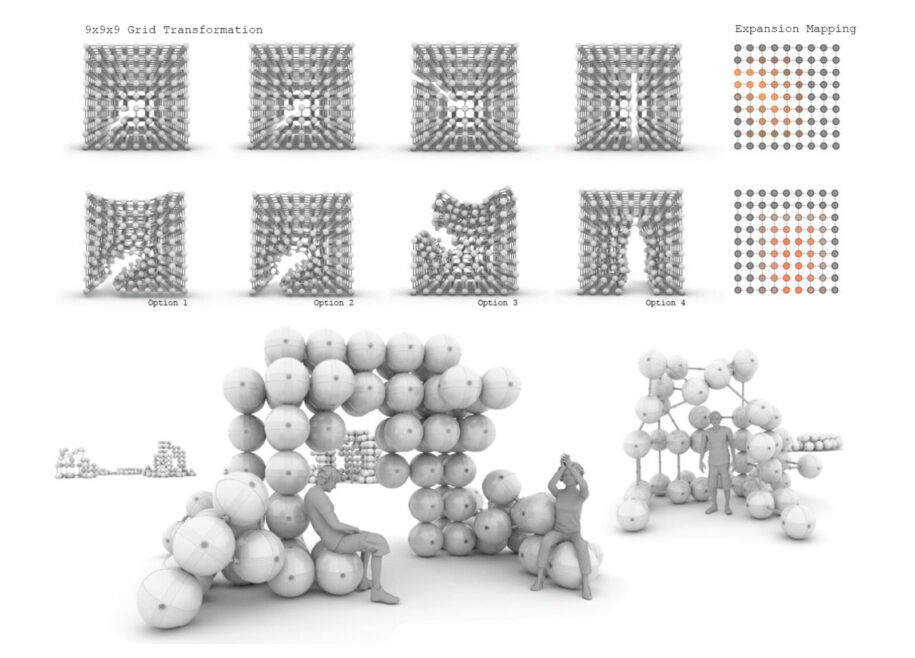 In addition to its adaptive, space-making ability, the system provides a layer of interaction with its users. 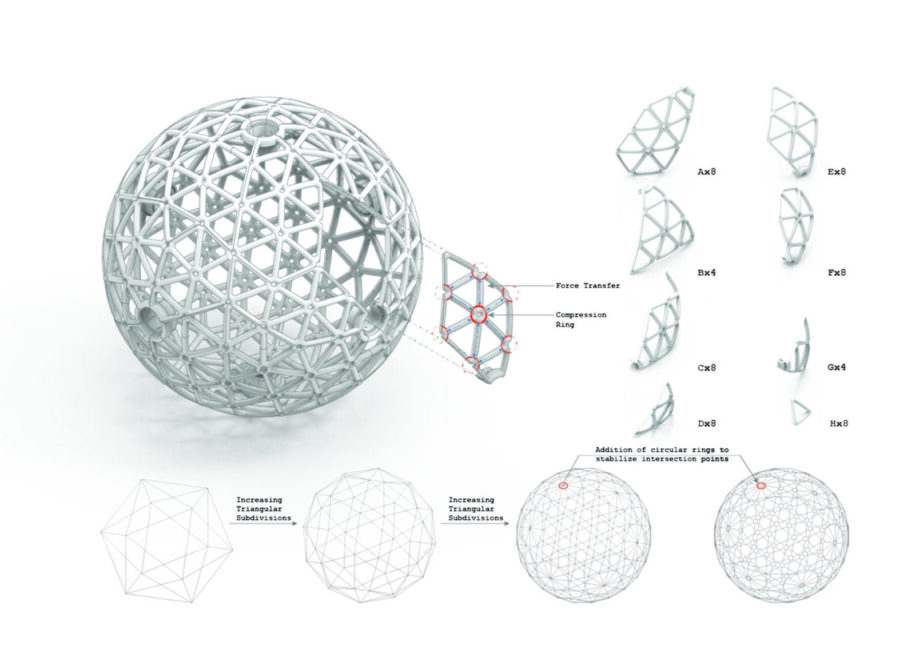 Culminating from research of light and its various effects, illumination has been incorporated in the system to provide an added layer of experience. Using a further advanced sensory system, the overall system responds to users with artificial light when lack of natural light is detected. The system being machine-learned analyses and maps interaction with its users in order to adapt and transform the space conducive for use, based on the time, frequency of use and occupancy. The ambiance created by the play of light and shadow, though not physically yet brings about transformation in the space generated.

by ANGELIKI ASIMAKOPOULOUArchisearchhttps://www.archisearch.gr/wp-content/uploads/pikilo_exter-370x700.jpg
STUDENT WORKS 08MAY 2021

Re-CONNECT: From the technological alienation to a new way of communication | Diploma thesis by Phoebe - Charikleia Kamea & Vasiliki Karagianni

by ELPIDA ROIDOUArchisearchhttps://www.archisearch.gr/wp-content/uploads/05-11-370x700.jpg
SHARE THIS PAGE
WITH YOUR FRIENDS