Diploma thesis by Demetrios Lampris, entitled “Ilissia: Ministry of Economics & Two Museums ”, aims to restore the cohesion of the urban fabric in a privileged yet at the same time neglected region in the centre of Athens.
–text by the author

Despite its long history, Athens is a modern metropolis. During the short period of Greek modernization (’60s – ’70s), various social and political reasons and the lack of general planning, resulted in land’s fragmentation into smaller and private ownerships. Thus, these parameters led to absence of public spaces and monumental public buildings. This proposal aims to restore the cohesion of the urban fabric in a region of Athens centre. 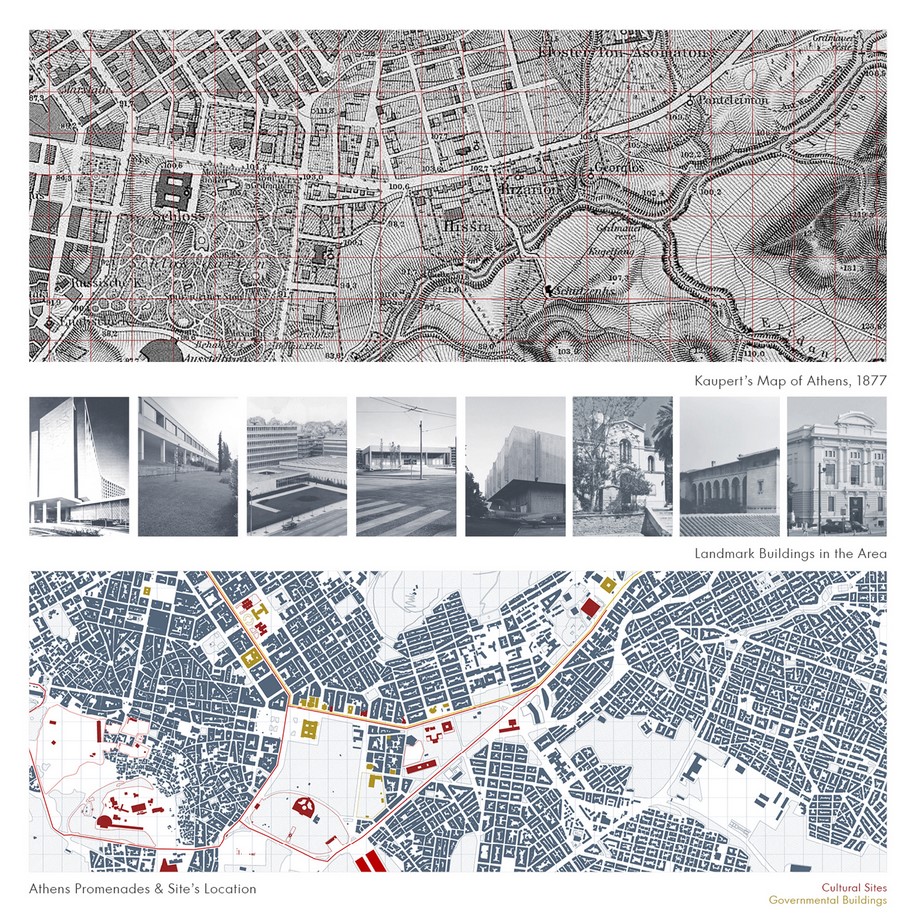 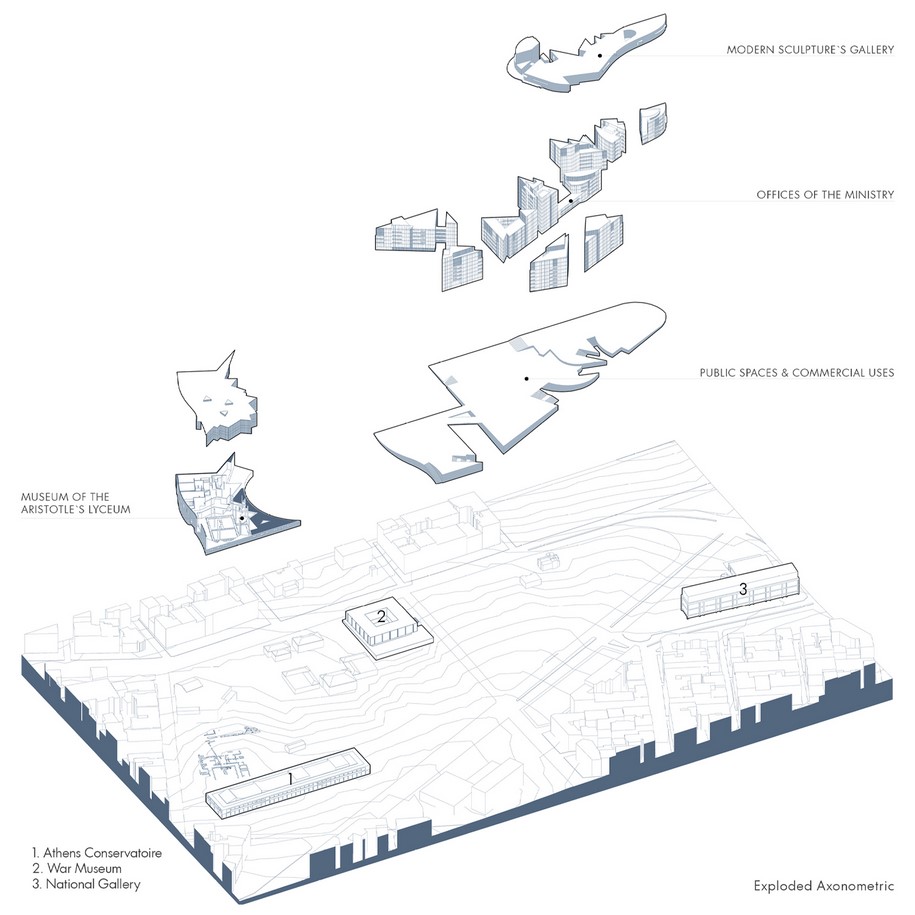 Located in a privileged yet so far neglected territory, the proposal is a dynamic coexistence of public office buildings with several cultural, commercial, leisure and open spaces.

Ilissos is one of the three rivers of Athens, and originates from Hymettus and crosses southeast through the Attica basin, leading to the Phaliron bay. Until the river’s under-grounding, the territories alongside the riverbed, east of the parliament and south of Lycabettus hill, used to belong to the army. After that, large avenues were constructed. 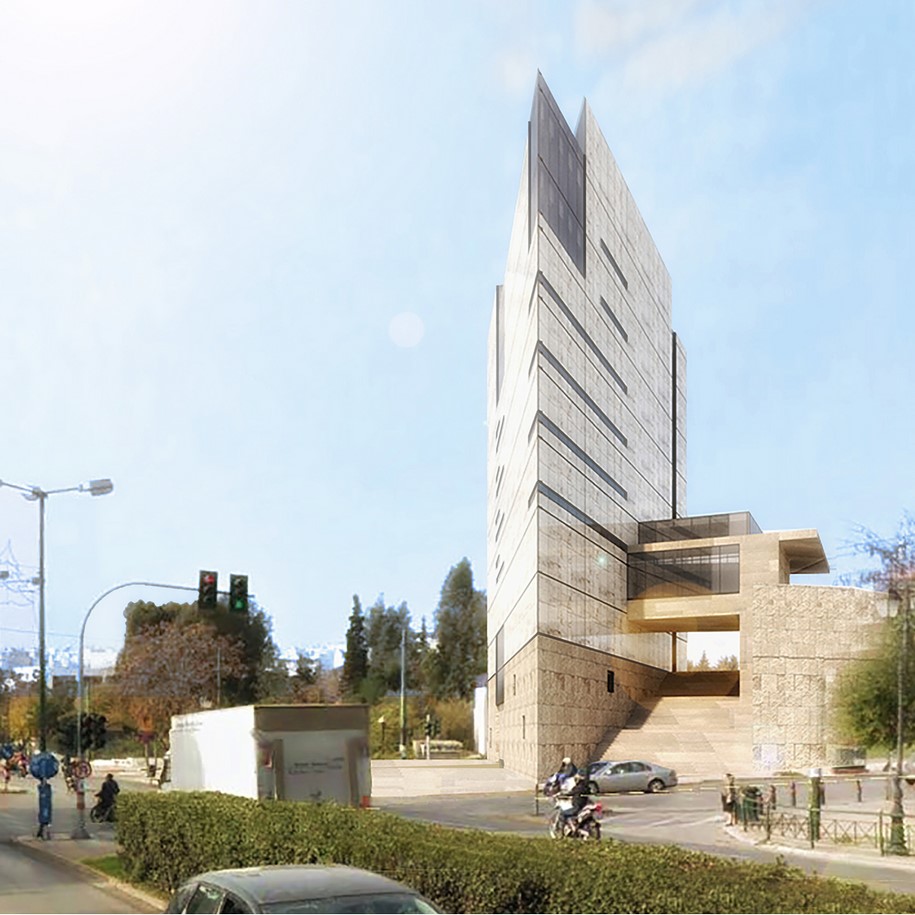 On the one hand, the large avenues act as boundaries of the adjacent urban fabric. On the other hand, they separate the region into smaller sites where institutional buildings are located.

Some of the most renowned architects were recruited to design the War Museum, the National Gallery, the National Research Foundation, the Conservatoire and the most imposing of all, the Athens Hilton, a landmark that changed the face of the city forever. All these modern buildings are perceivable structures, surrounded by large free spaces and wide boulevards, which come into contradiction with the rest urban fabric of Athens, with the narrow streets and the massive residential blocks. This fact gives them a monumental character and makes them urban landmarks. However, the larger one remains vacant and neglected.

The building of Ministry of Economics, currently hosted in dispersed hired private buildings, is the larger one and with the most monumental character in the intervention.

Opposite to the National Gallery, the Gallery of Modern Sculptures is placed, and above the ruins of Aristotle’s Lyceum a museum is designed. The vast majority of the buildings is arranged along Vassileos Constantinou Avenue, in order to create a façade of public importance while along Vassilisis Sophias Avenue a succession of public spaces is arrayed. 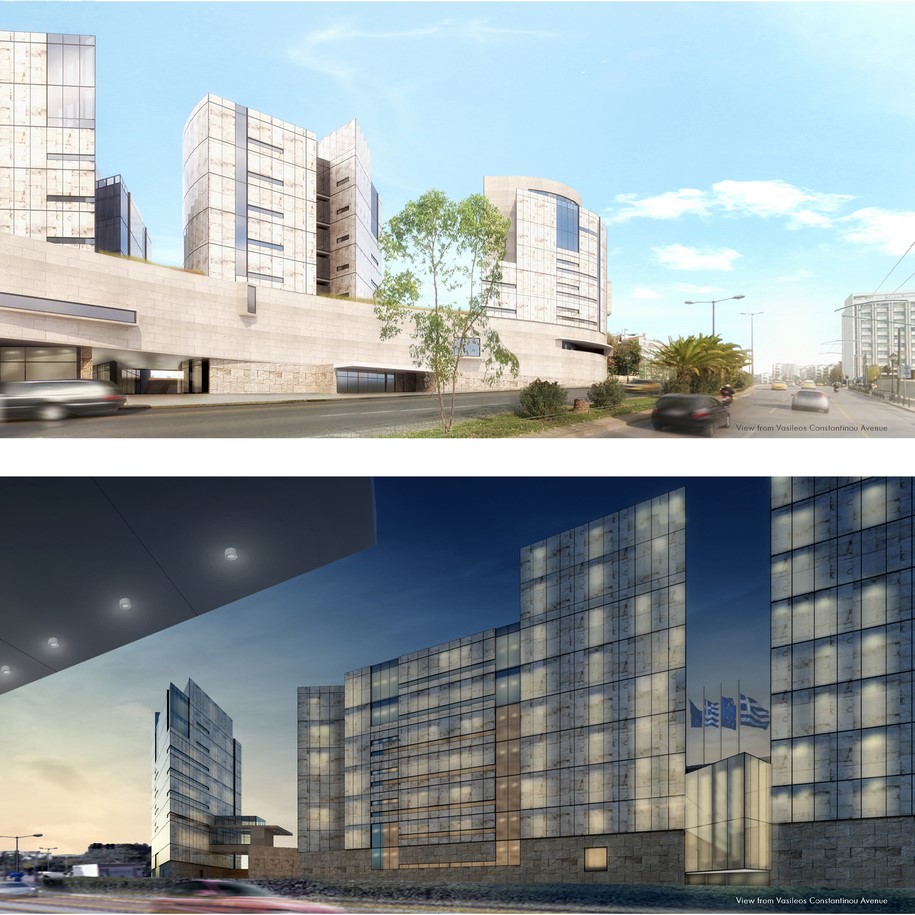 The promenade, the monumental square before the ministry, the bridge that leads to a smaller square with view above the garden of Byzantine museum, are in constant dialogue with the existing parks and city’s landmarks.

Finally, the presence of the metro station and the height difference give the opportunity to create a semi-underground square hosting shopping and leisure facilities.

Firstly, the height difference between the two avenues provides the opportunity for the creation of a podium. In place of several cross axis, stairways are formed to link the upper with the lower city. The ministry’s tall buildings are raised alongside V. Constantinou Avenue, leaving open space on the northern side for public uses.

Finally, another structure surrounds the offices to functionally and morphologically unify the complex. On the western part, behind the Byzantine Museum, the Aristotle’s Lyceum Museum, is designed with the same principles. A pedestal encloses the ancient ruins, and above it, a curtain wall demarcates the exhibition hall allowing unobstructed the view towards the garden.

The materials chosen for the whole intervention are two types of processed stone, translucent marble and glass referring to Athens’ architectural heritage, and landscape.

by MELINA ARVANITI-POLLATOUArchisearchhttps://www.archisearch.gr/wp-content/uploads/Dimitropoulou-Stouri-research-thesis-stevenholl-min-370x700.jpg
SHARE THIS PAGE
WITH YOUR FRIENDS