Fragments of a lost state // TOPIA. Diploma thesis by Koutropoulou Elli-Maria and Pouloutidou Eleftheria Eirini from AUTH Architecture school. The project critically develops around the phenomenon of climate change, and more specifically the phenomenon of sea level rise. 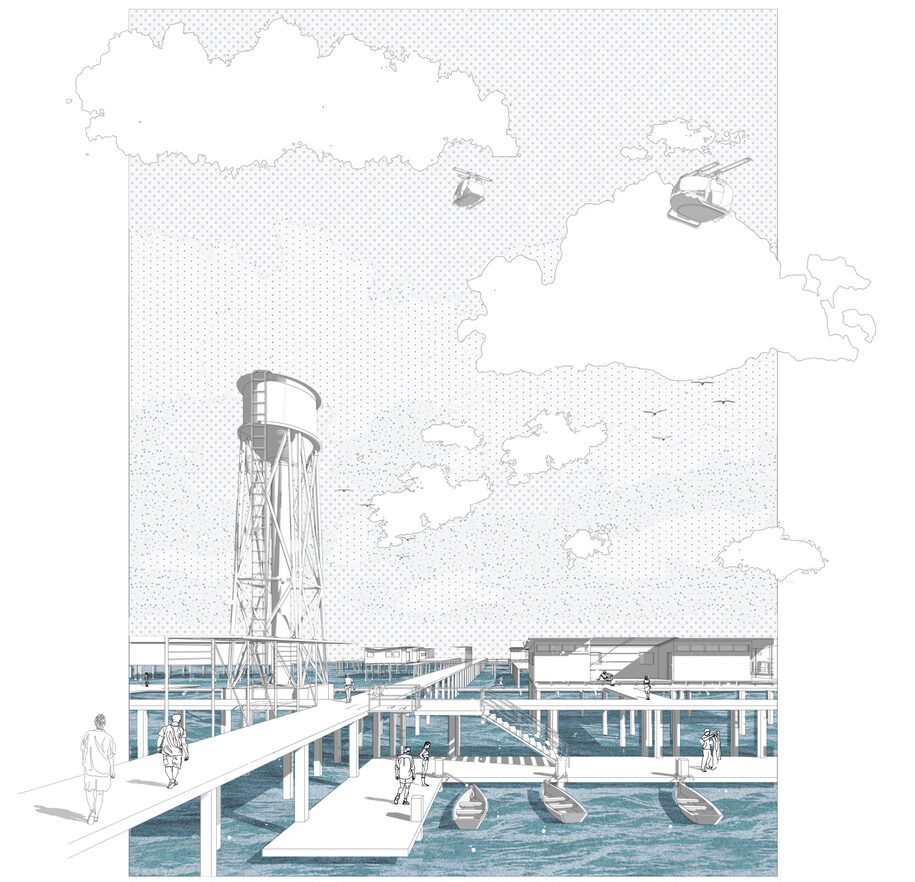 Many islands are now threatened even with a total loss of their land. The most affected areas are the coral atoll state-nations of the Pacific Ocean, from which the state of the Marshall Islands was chosen, in order to explore how this state could potentially survive, as a future non-land state, in the face of this environmental crisis. 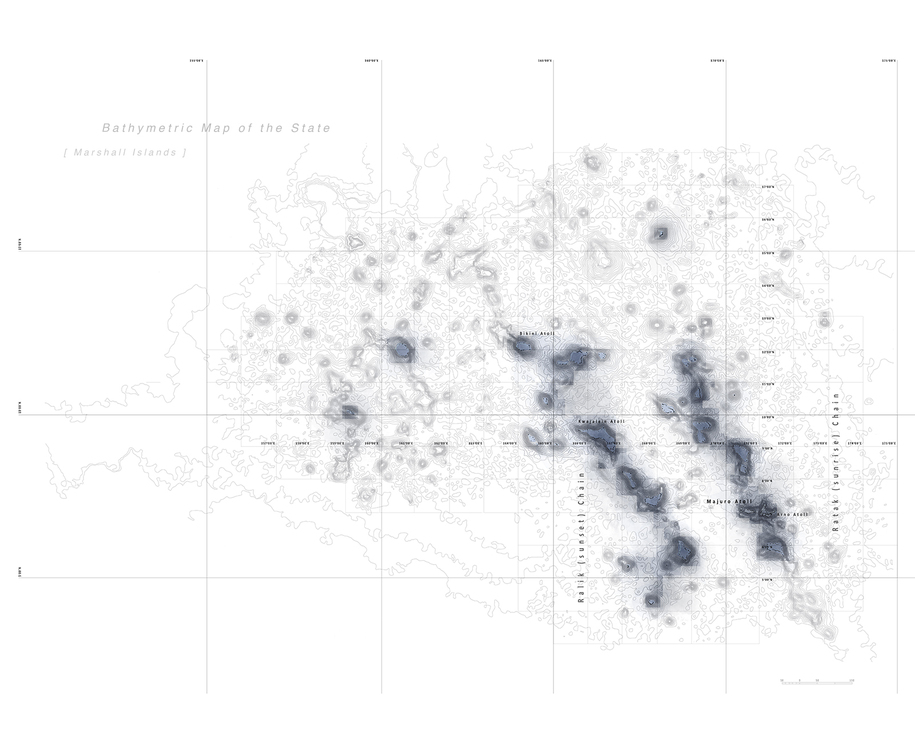 The present project attempts to formulate an architectural work that will critically comment on the phenomenon, through its presence, and will function as a reference point, gathering the fragments of the past, but also consolidating its existence and dominance in the ominous future that follows. 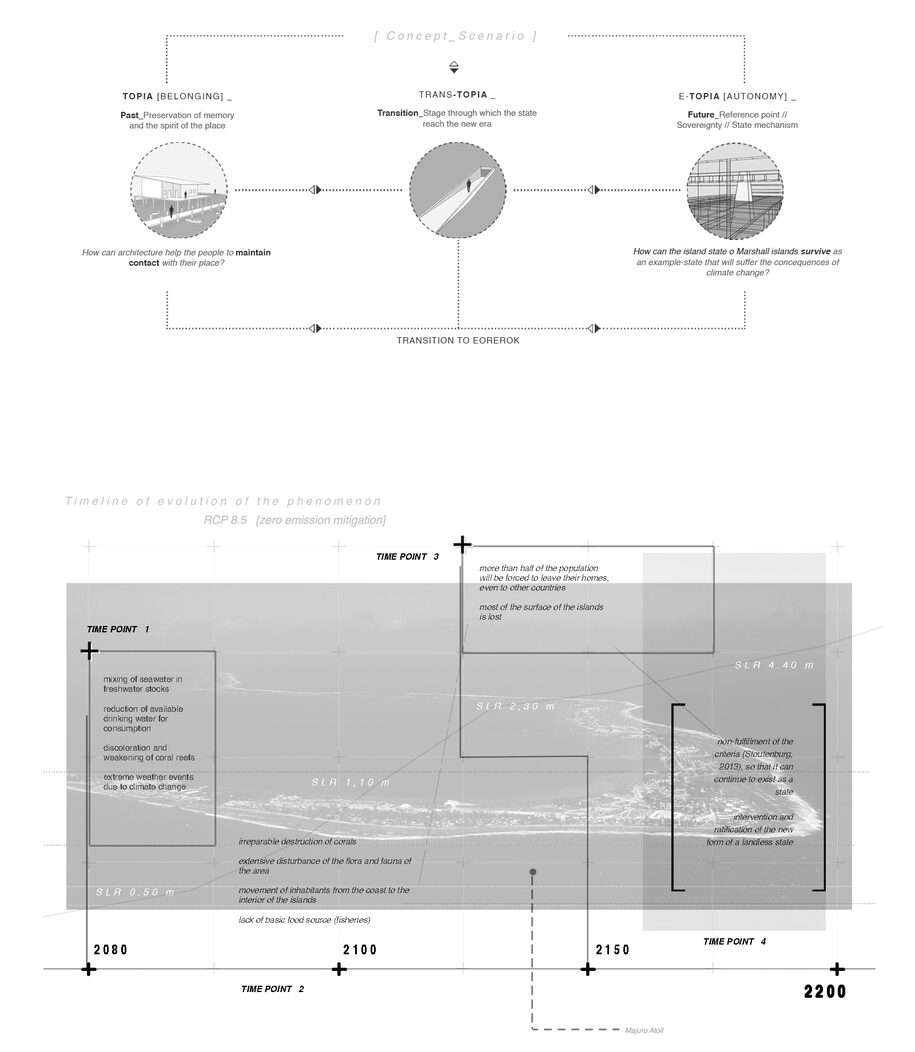 The above intentions are structured in an organizational triptych, at conceptual level: TOPIA, TRANS-TOPIA and E-TOPIA. The first refers to the past and the preservation of “genius loci”, the second is a transitional stage that symbolizes the present and the loss of the state due to climate change, and the third symbolizes the future of the state and its transition to a new era. 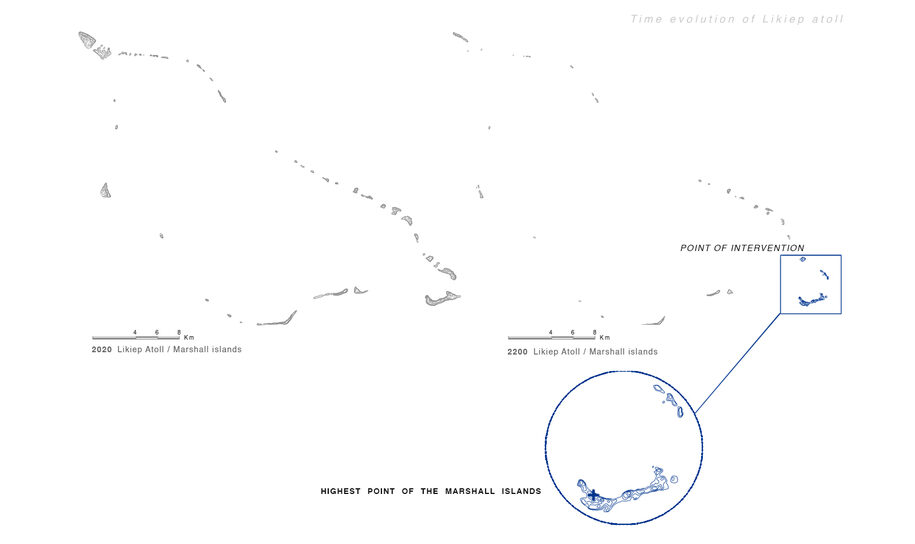 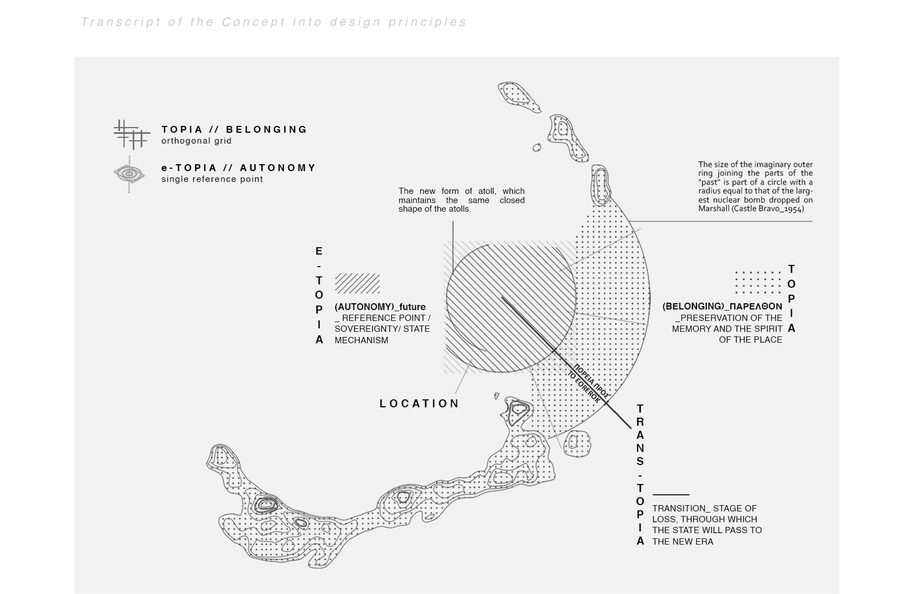 According to the old Marshall religion, death was not seen as the end, but as another beginning, a path leading to the island of the dead or Eorerok, which was not a real site, but a symbolic one. There, what ceased to exist returns in a different form and co-exists with the living, in the same place and time. Thus, the “death” and the loss of the state should not be linked to the annihilation of the place and its establishment in another location, but to its reconstitution in another form, at the same exact point and in full dialogue with the past (TOPIA), the present (TRANS-TOPIA) to build and shape the future (E-TOPIA). 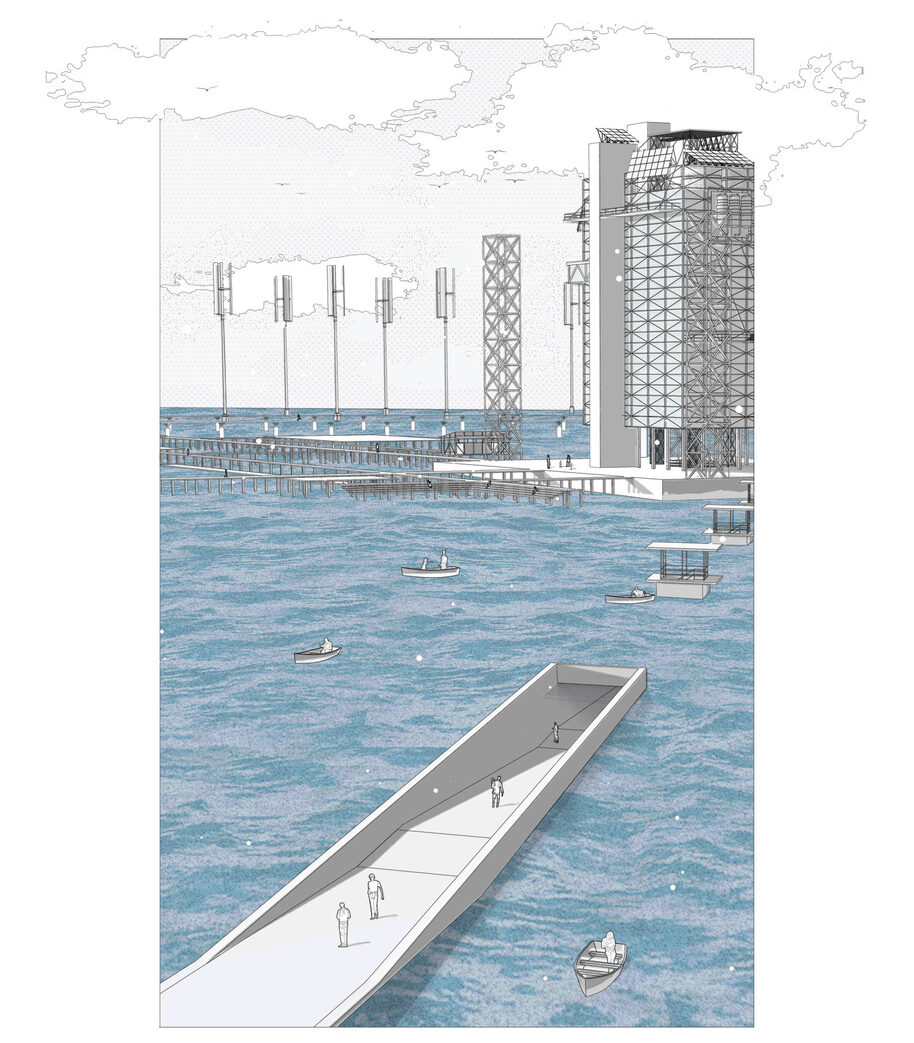 FROM CONCEPT TO DESIGN STRATEGIES

Based on scientific scenarios, we placed our project chronologically, according to the evolution of the phenomenon, in 2200. At that time, the criteria, in order for the Marshall Islands to be considered as a state, are no longer met due to land and population loss and so the project is shaped to re-validate through design these criteria. 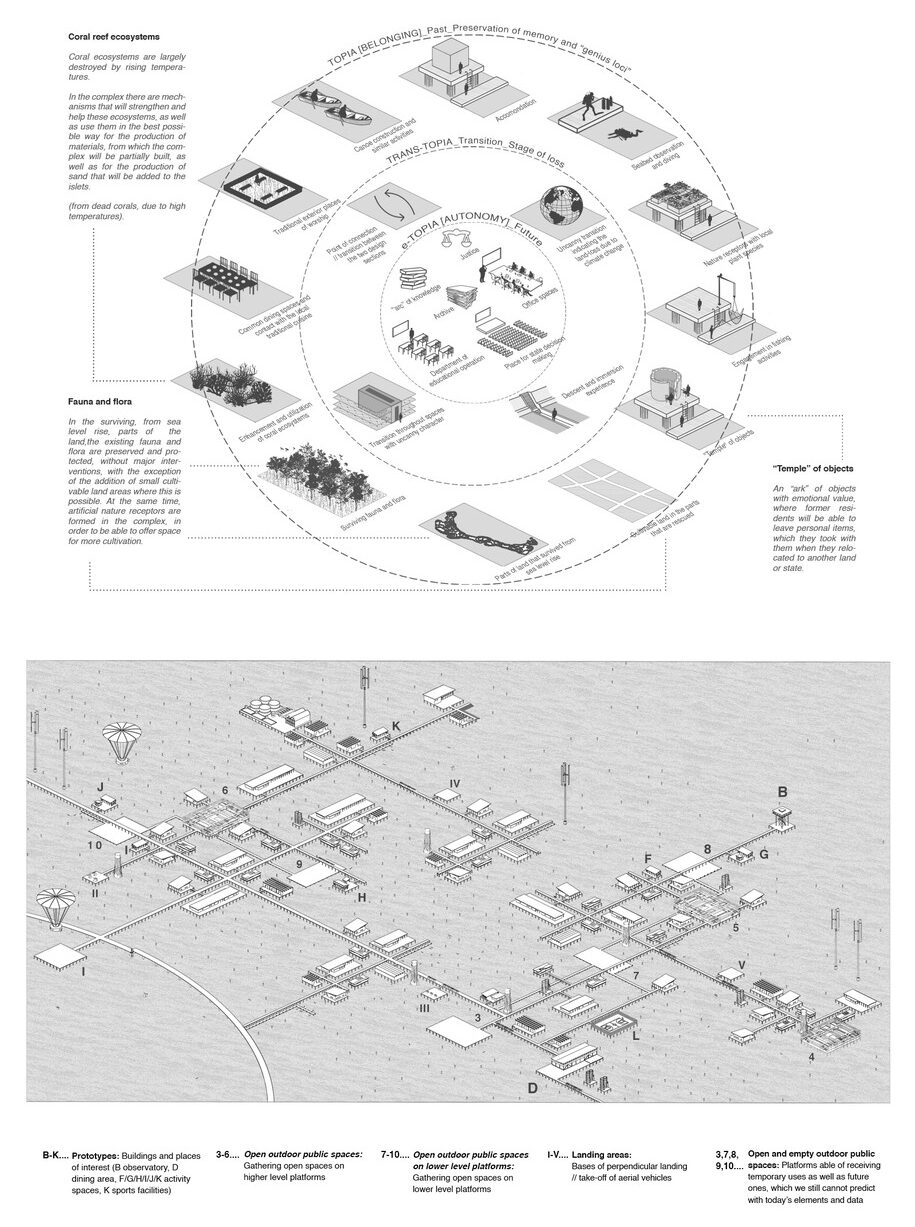 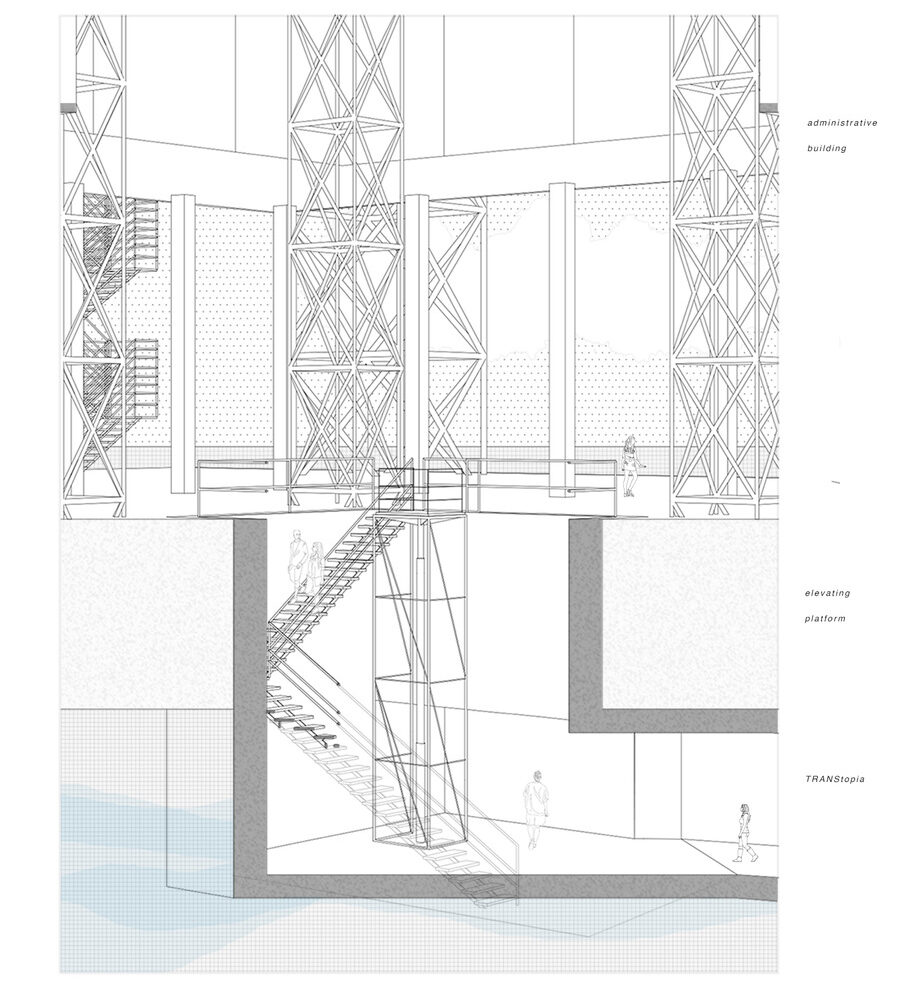 In the individual sections of the design, we must point out that the TOPIA section this thesis does not attempt to revive the Marshallese architecture, but to reshape basic elements, into narratives of a future architecture neutral enough to be able to be placed many years later. Also, the part of e-TOPIA that symbolizes the future and is supported by mechanisms that ensure its existence even in worse climate change scenarios. 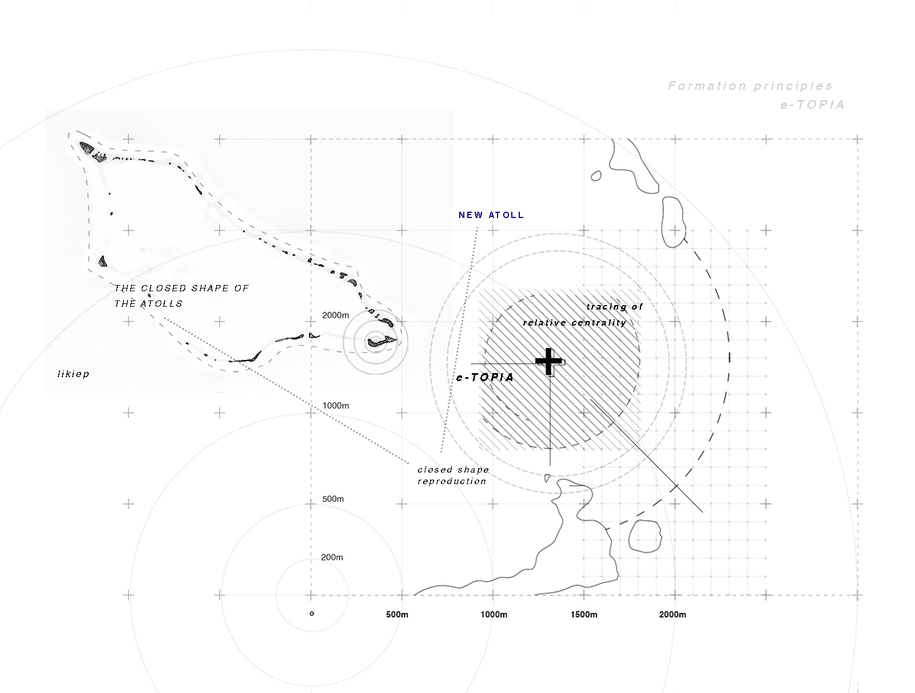 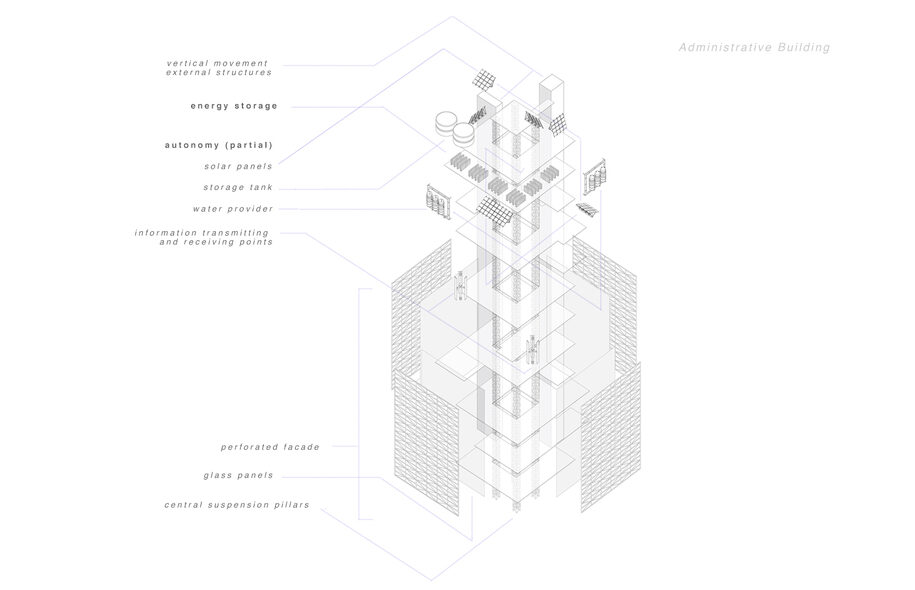 In conclusion, this thesis by re-examining the terms of a non-land state, attempts through its design to keep alive the memory of the place, but, at the same time, to ensure that the endangered state will maintain autonomy, sovereignty and continuity in world history, having, at the same time, its rights over the marine waters and natural resources of the region. 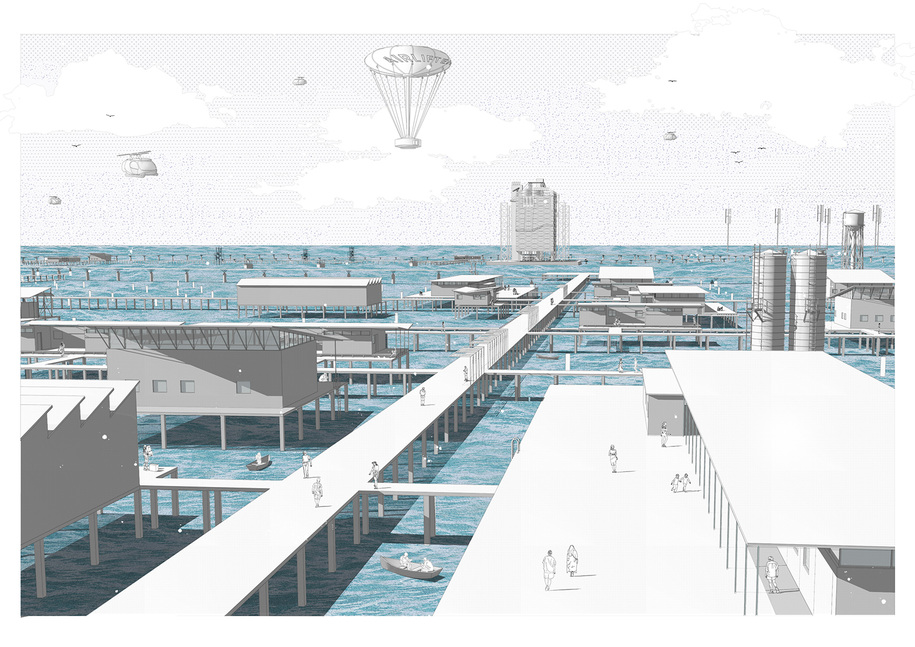 READ ALSO: COSTA NUOVA: expansion of the city of Patras on the sea front | Student project by Tsakas Nikolaos and Kouris Nikolaos
0 COMMENTS

by ANGELIKI ASIMAKOPOULOUArchisearchhttps://www.archisearch.gr/wp-content/uploads/11-31-370x700.jpg
SHARE THIS PAGE
WITH YOUR FRIENDS