Psomas Studio of Architecture PS-A unveils its newly completed  Antasia Beach Club in Paphos, Cyprus a beach pavilion incorporated in a topographical intervention of the coastal promenade of the city.

The winning design, result of a local public competition organised by the Municipality of Paphos, was aiming to the creation of a contemporary beach pavilion on the municipal beach of the city, one of the most central points of the city’s coastal seafront, with seamless views to city’s protected medieval castle and picturesque port. Upon construction completion this year the operation was handled to Thanos Hotels & Resorts who created a sophisticated day-to night concept in the venue with a beachfront restaurant and a bar on its rooftop terrace. 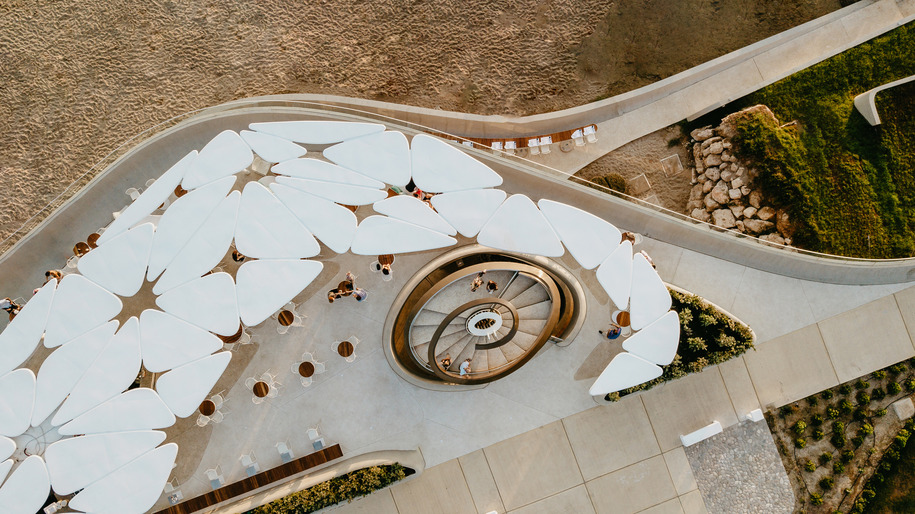 Psomas Studio design was aiming not only to create a beach restaurant but a landmark for the city of Paphos which reflects its relation with the sea, its history and its future. The fluid design of the concrete platforms with the soft connection between floor and balustrade reflects the soft geometries of the renowned ancient Cypriot potteries while  the flower-like sheltering columns of the roof top terrace echoes to the patterns of the renowned ancient mosaics of Paphos. 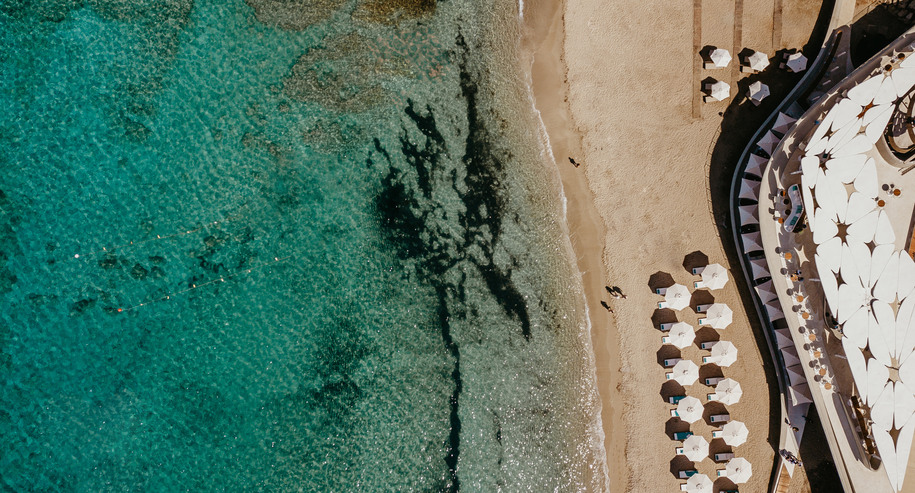 The fluid concrete platforms, one on each level, sweep to follow the coastline and melt back with the natural surroundings to create an intuitive amphitheater design where the sea views take a centre stage. In-Between them , an enclosed space is created by introducing a curvy façade conformed by glass and bronze metal cladding endings. 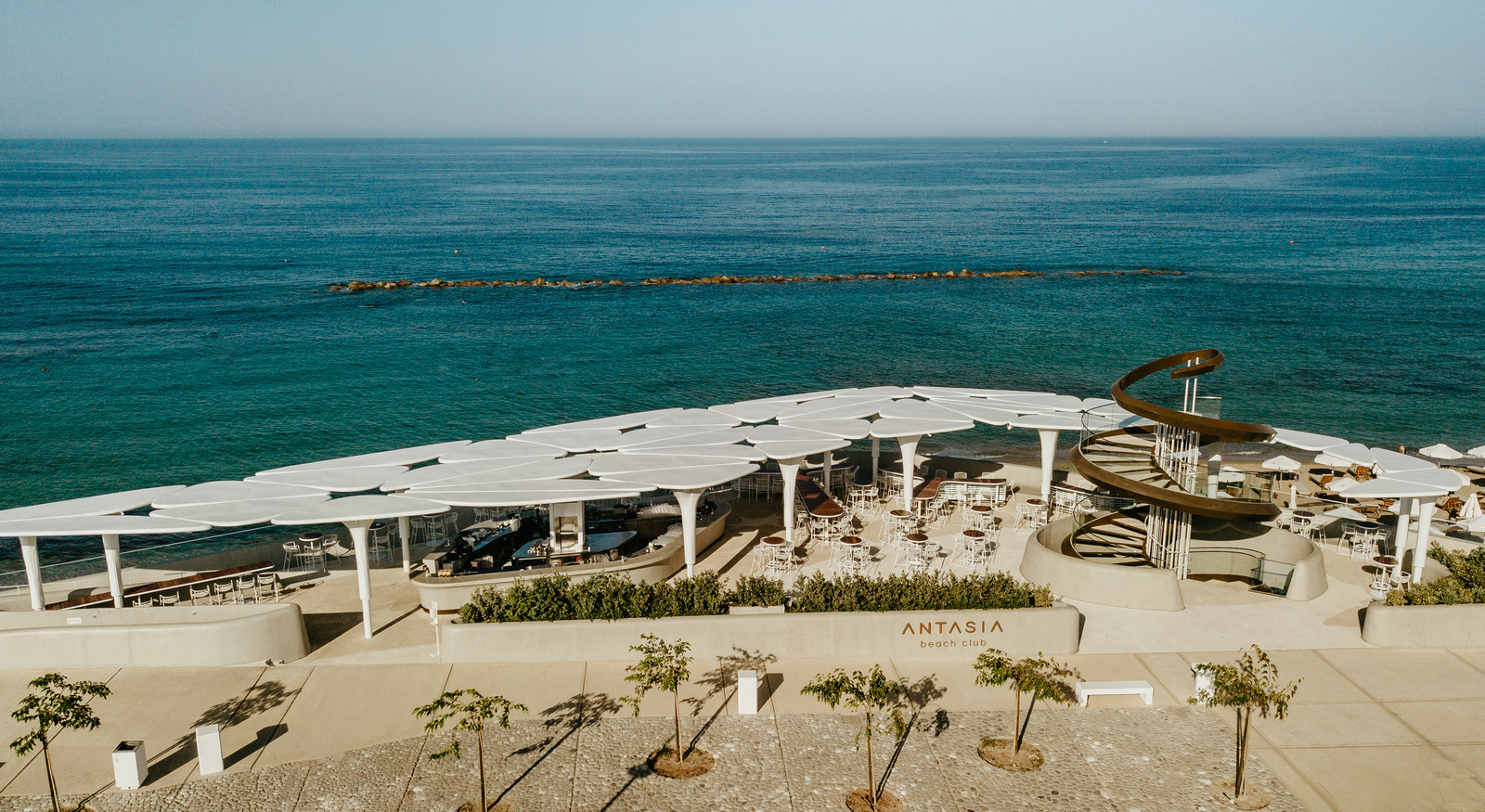 Blending into the dunes of the only sandy beach of the Kato Paphos seafront, Antasia Beach Club gradually reveals itself as guests descend from the promenade and the top terrace to the beach level below. While completely tucked under its terrace and revealing itself only after completing the descent, Antasia Beach Club is completely embedded within the beach below, marking a fresh intervention that strikes a balance between man-made and nature.

The highlight of the design is the revolving helix staircase which connects the beach level with the rooftop-promenade level and continues even above to create an open-air observatory, giving the feeling to the visitor that ascents to the sky. Although surely functional as an observatory lookout point to the magnificent sunsets and the medieval castle of the city, the helix staircase rises above as a sculptural landmark and a touristic attraction. 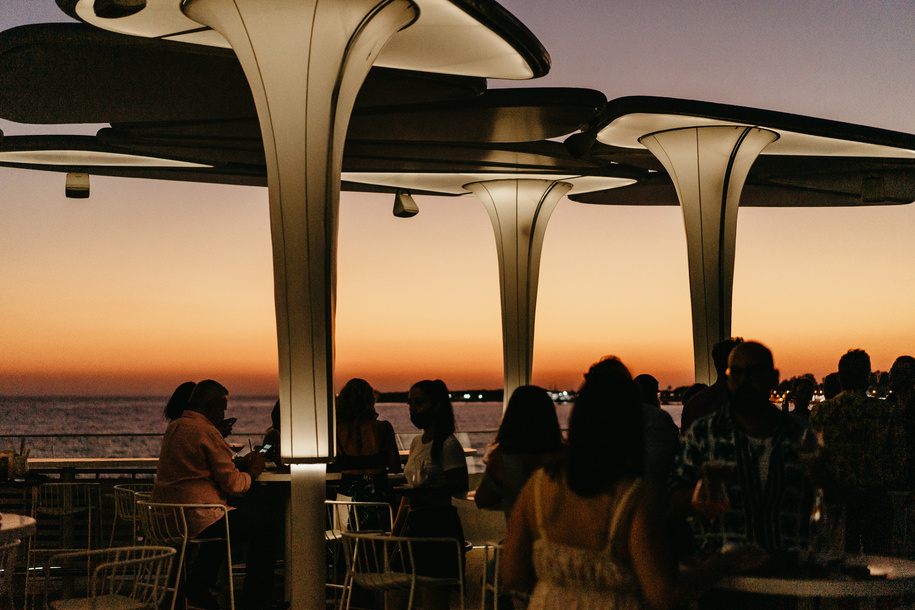 The flower-shaped canopies of the rooftop, a field of hyperbolic geometries, tend to twist around the helix staircase combining metal structures dressed with tensile architectural fabric. Vertical elements stretch the fabric towards their direction forming smoothly mushroom shaped drops, self-illuminated during night hours by hidden lighting incorporated between the structure and the fabric. 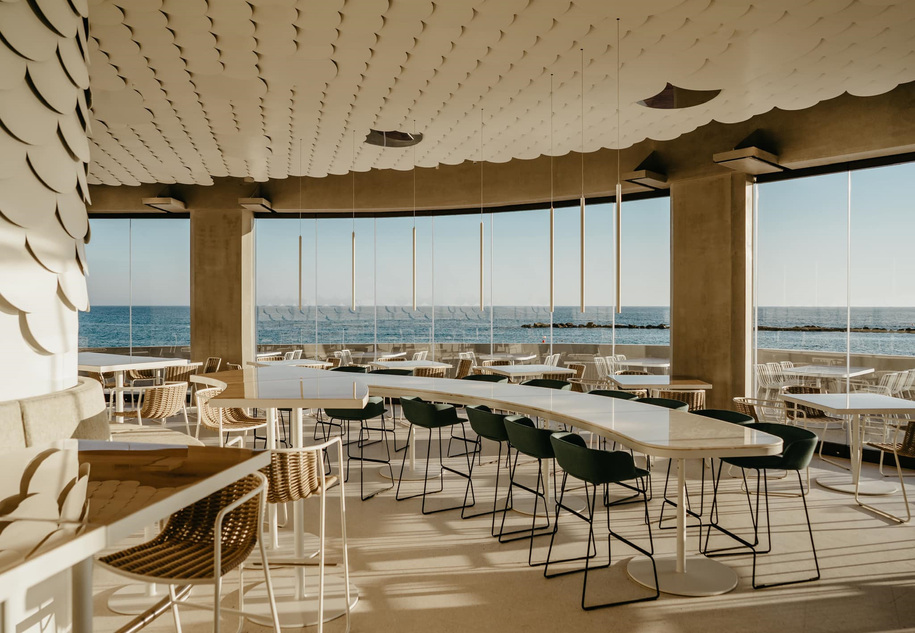 Interiors, designed by Baranowitz+Kronenberg are inspired by the raw natural elements, using a playful white-scale design to reflect the life of the sea. A sea of white scales has been introduced throughout the space resonating with the underwater life beneath. A playful interpretation of the natural geometry of the scales of fishes, the designers have played with size and structure combined with opaque and reflective finishes to add a touch of richness to this backdrop.


About Psomas Studio of Architecture PS-A

Psomas is an innovative and emerging design studio based in Cyprus , creating space adapted to its surroundings  with parametric and generative design methods . They design in any scale for residential , hotel developments , cultural and corporate uses , always taking into consideration all the technological  and fashion aspects, combined with contemporary materiality  and structural solutions.
Except architectural design ,  their services extends to the fields of interior design, urban planning , restoration-rehabilitation , landscape and structural design.The firm was established by George Psomas in 1988 .Since then,  were involved in over 300 constructed projects and awarded for many architectural competitions.  Since 2017  the practice is regenerating by Konstantinos Psomas who was working for  5 years for Zaha Hadid Architects, one the most famous and legendary architecture practises of the world. During his experience at ZHA, Konstantinos had the chance to be involved in a variety of international projects and to be specialized in large scale developments.
In 2020, Psomas Studio of Architecture was nominated with the prize: “ICONIC AWARDS -INNOVATIVE ARCHITECTURE WINNER” for the Concept design of Municipal Park of Colours in Paphos, by the German Design Council.

Thanos Hotels and Resorts is Cyprus’ leading luxury hotel resort group. With three muchloved and entirely distinctive hotels – the iconic Anassa, sleek Almyra and classic Annabelle, the company is still family owned, and family run. A fourth hotel has now been added to the Thanos portfolio and is currently under renovation, set to be relaunched in 2022 as Antasia. Founded 40 years ago by the late Alecos Michaelides, his son Thanos Michaelides is now at the helm of Thanos Hotels as CEO, supported by his siblings Natasha and Anna. Thanos Hotels is proud of its outstanding heritage and keen to build on its exceptional track record as one of the leading groups in the Mediterranean. From management to staff and through to guests, Thanos runs on an ‘extended family concept’ which has seen it go from strength to strength, sweeping the board when it comes to winning awards and maintaining incredible repeat guest figures at all its properties.

by ANGELIKI ASIMAKOPOULOUArchisearchhttps://www.archisearch.gr/wp-content/uploads/Sfageia_Giannis-Simitopoulos-6-370x610.jpg
SHARE THIS PAGE
WITH YOUR FRIENDS