Diploma thesis by Maria Magdalini Meimaridou & Charalampos Xypnitos seeks the establishment of a new border between the “inside” and “outside” on the remnants of the working houses of Serifos, so that they can be reused, and ultimately, resettled.

The project began with the detailing recording of the ground and the relationship of the “inside” and “outside” according to Foucault’s diagram, as the Deleuze has approached it. So, the destroyed walls of working houses continue to live in sequence with the multiform rocks and they are interrupted by the steep slopes of the ground. The borders of the houses do not stop anymore in the walls that the works had created but they have moved and spread out of them. The dense vegetation, the steep slope of the ground, the dry stones, the inaccessible paths, and the steep cliffs create a new border in the houses. 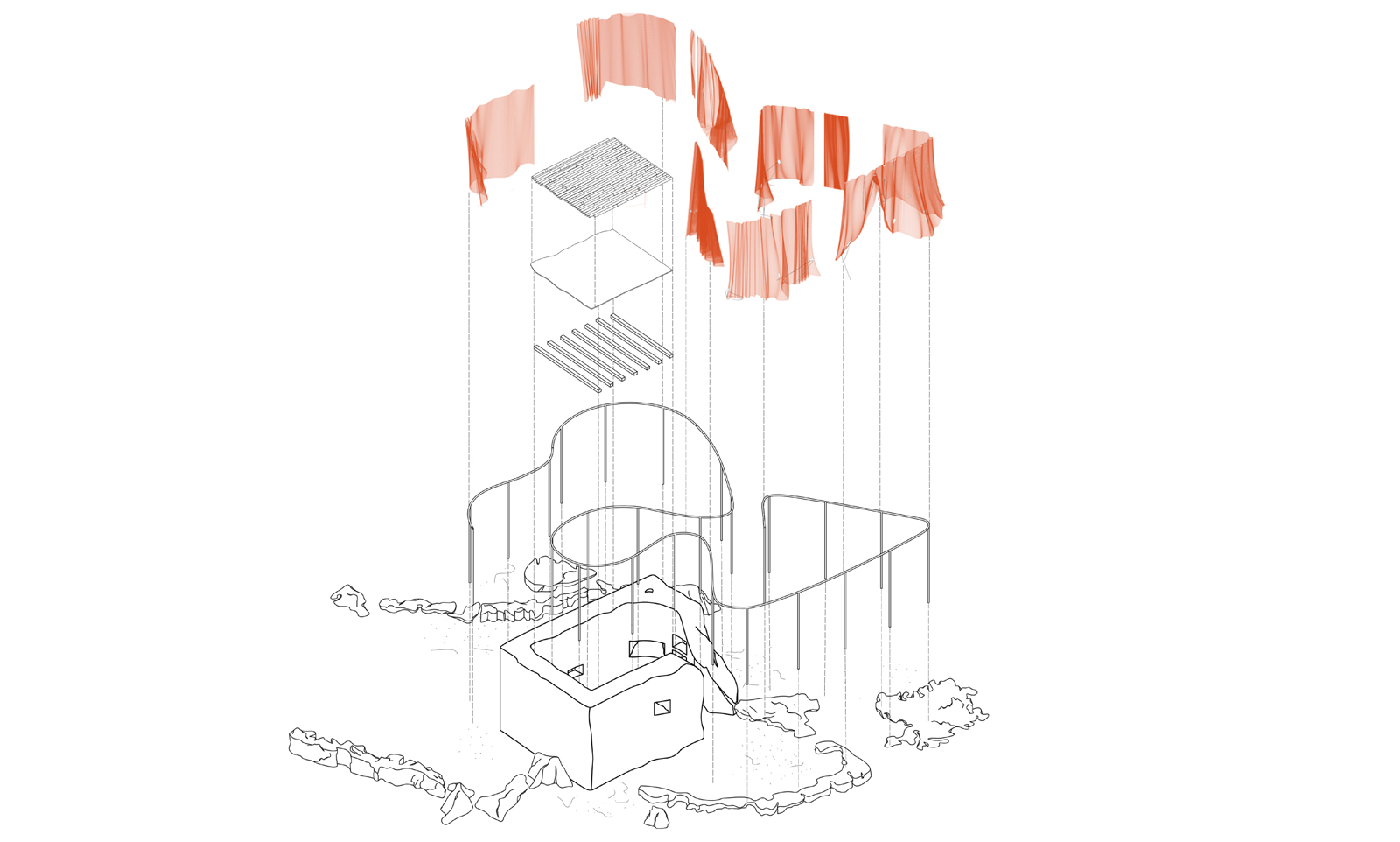 A gesture, a line in the form of fabric, operates like a garment to a naked body in order to embrace the new fragile limit. 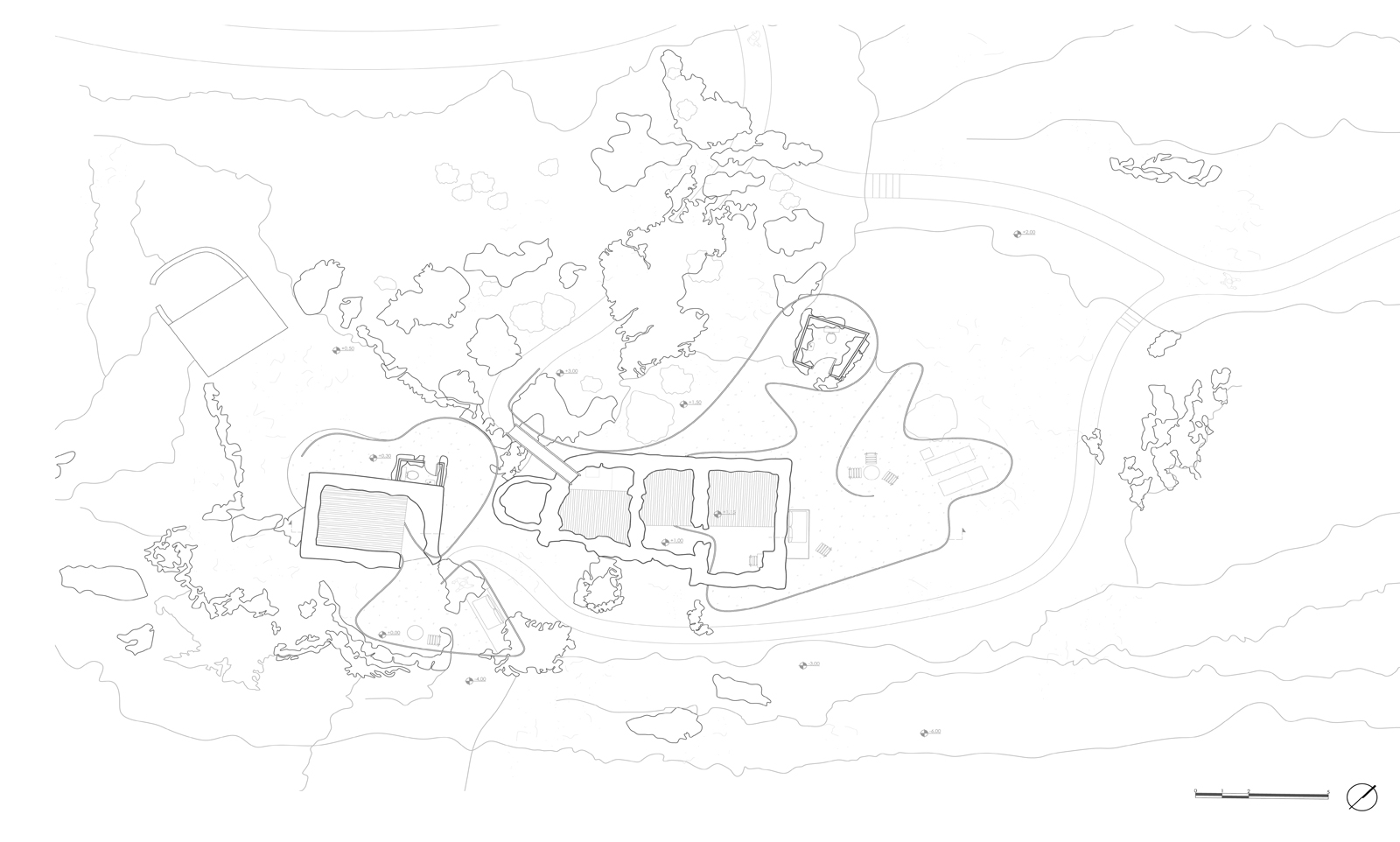 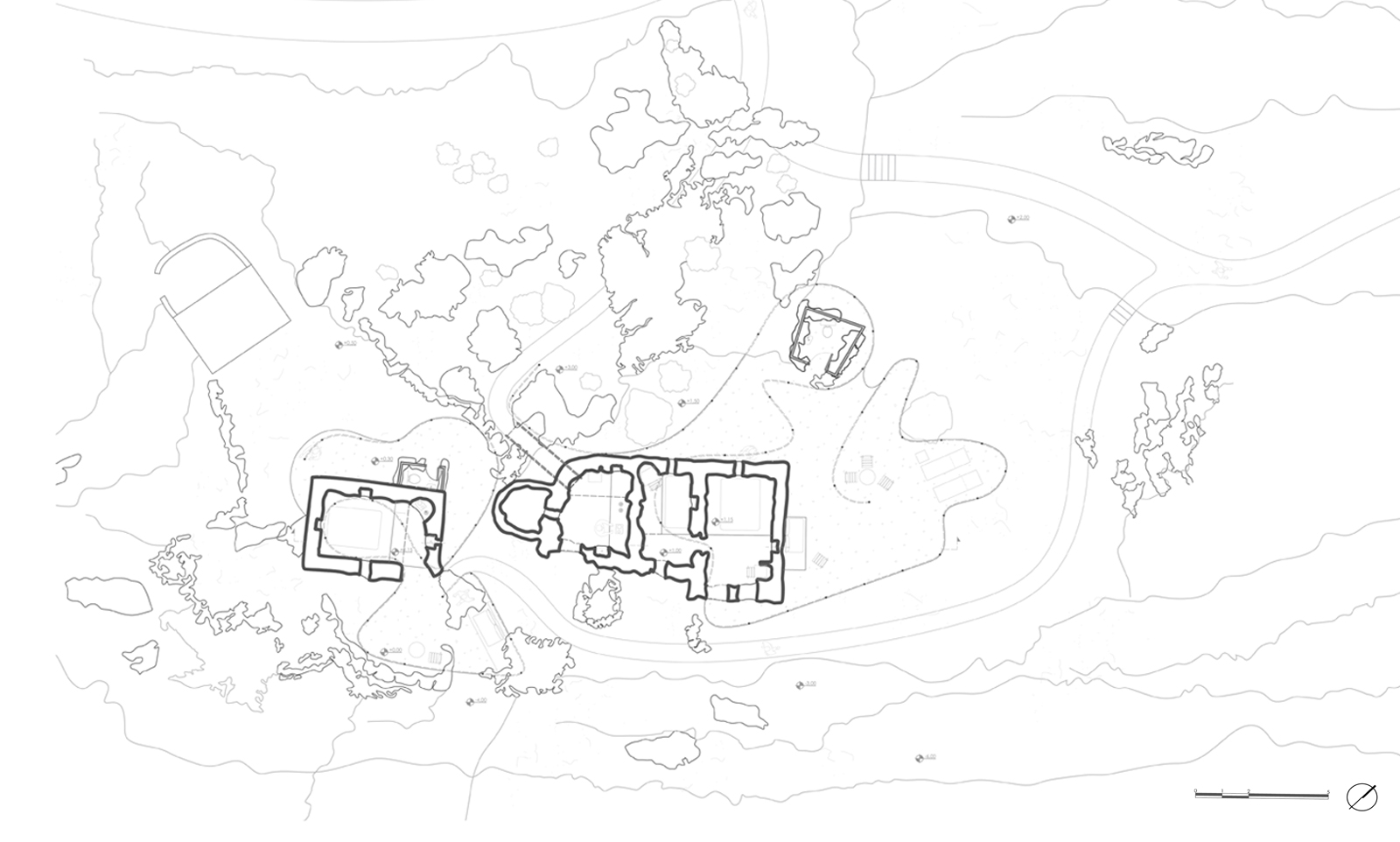 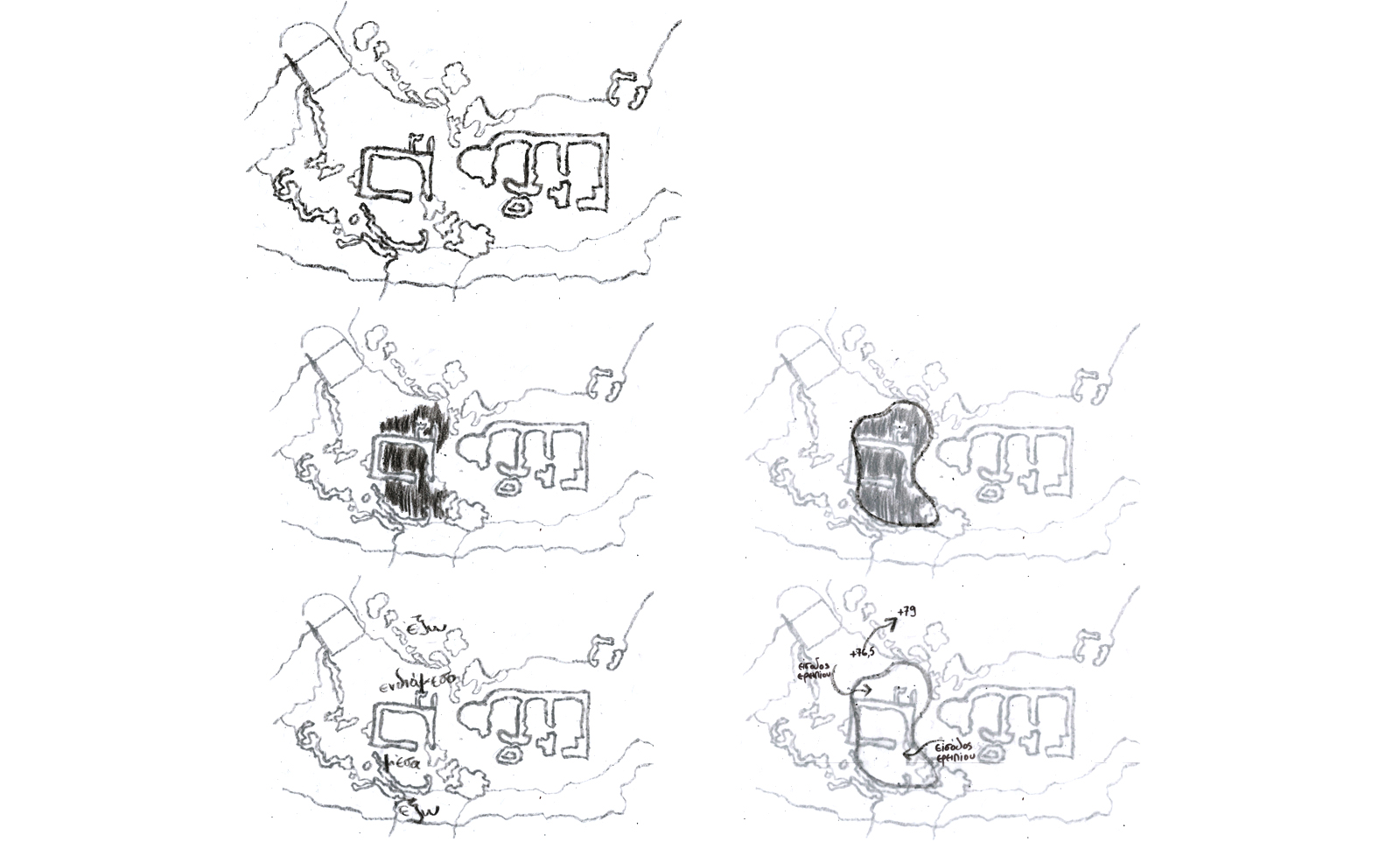 Such a thin border as the curtain that surrounds it. Through this border, a kind of summer residence is being created combining elements of both usual residence and camping. The main feature of this settlement is the direct physical involvement of the tourist/resident of the ruin, since he is called to manage the net according to the Beaufort. 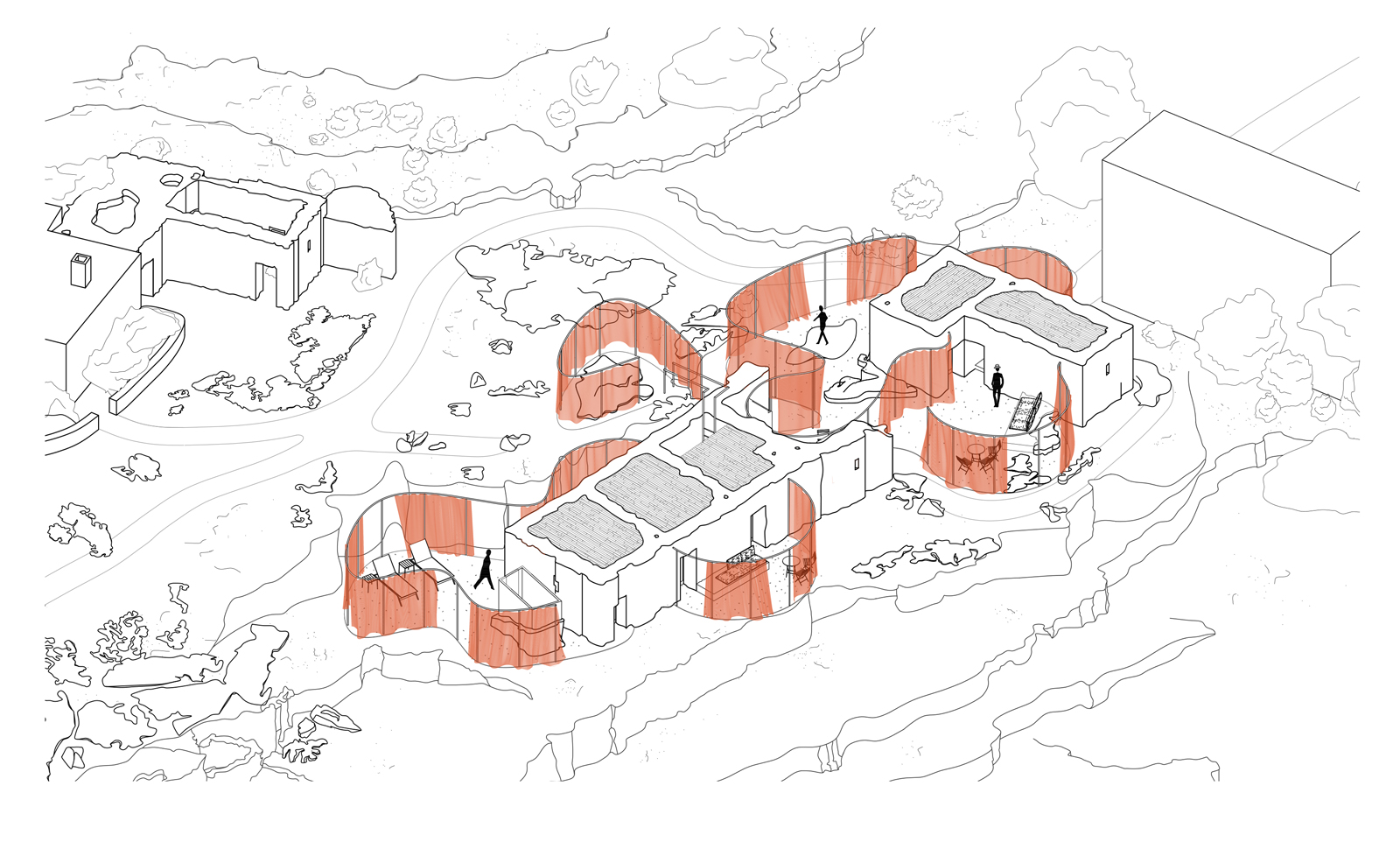 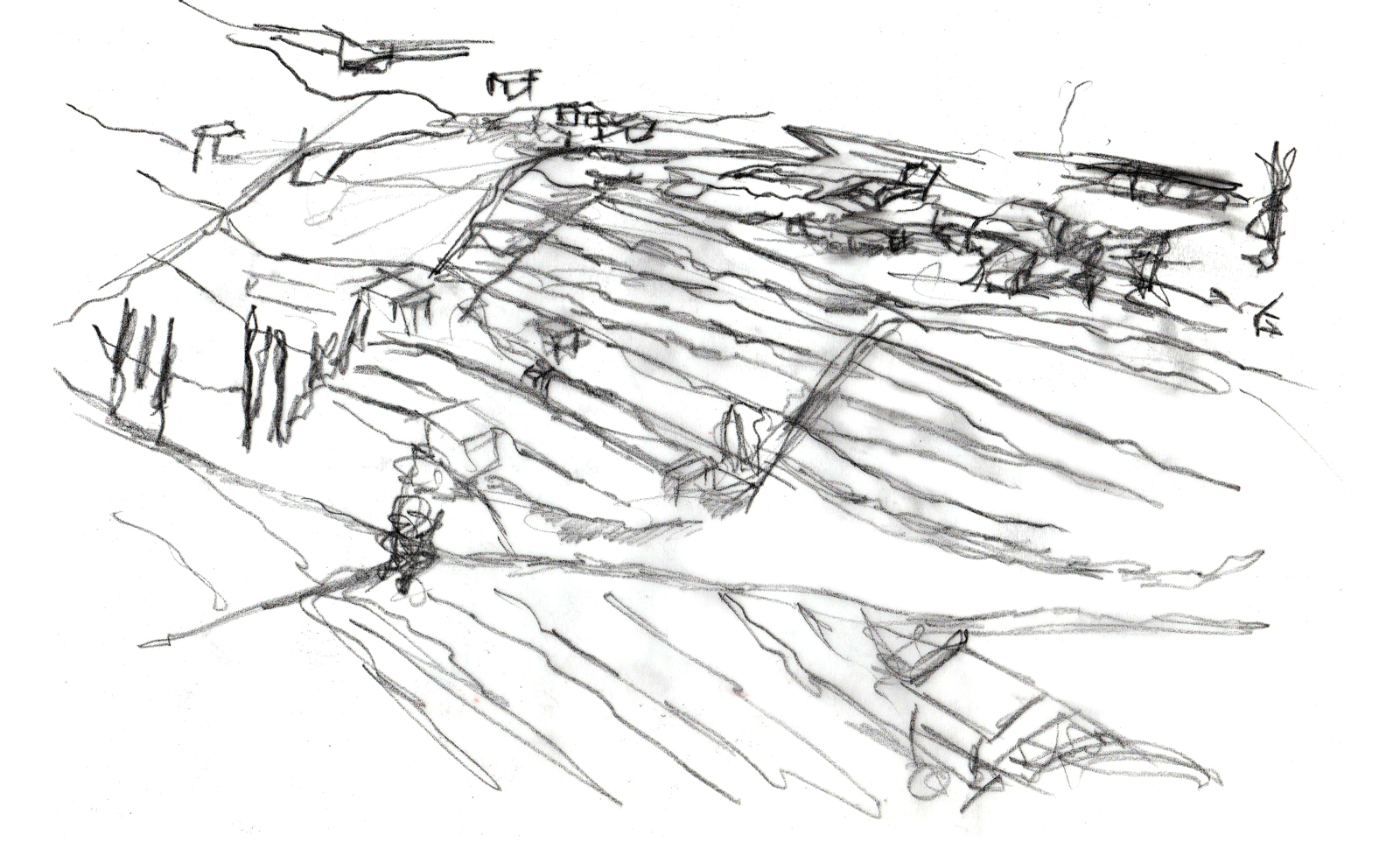 The resident, like a member of a sailing vessel, participate in everyday needs of the house. He folds, opens, shrinks, hangs, creating his own personal spaces. 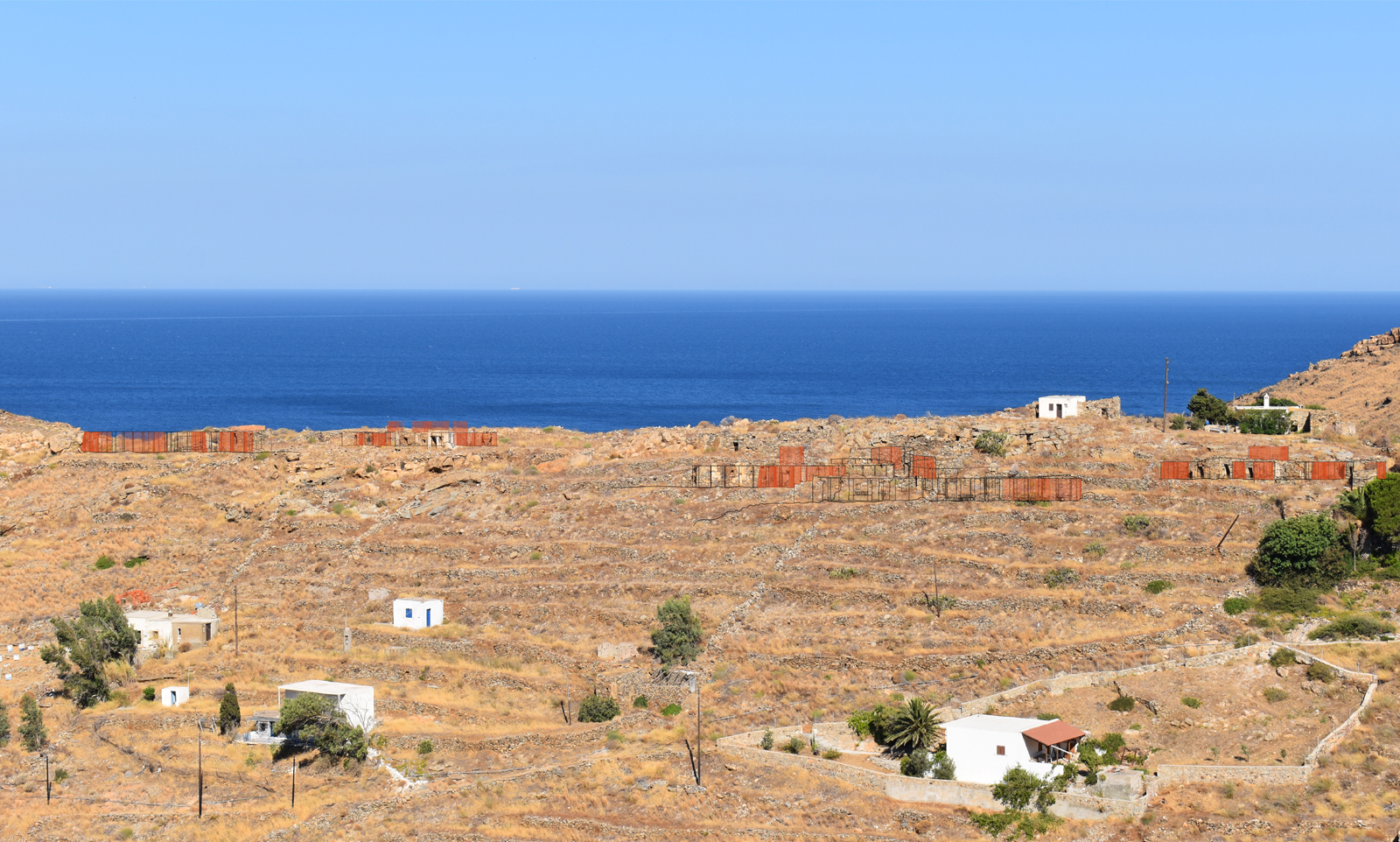 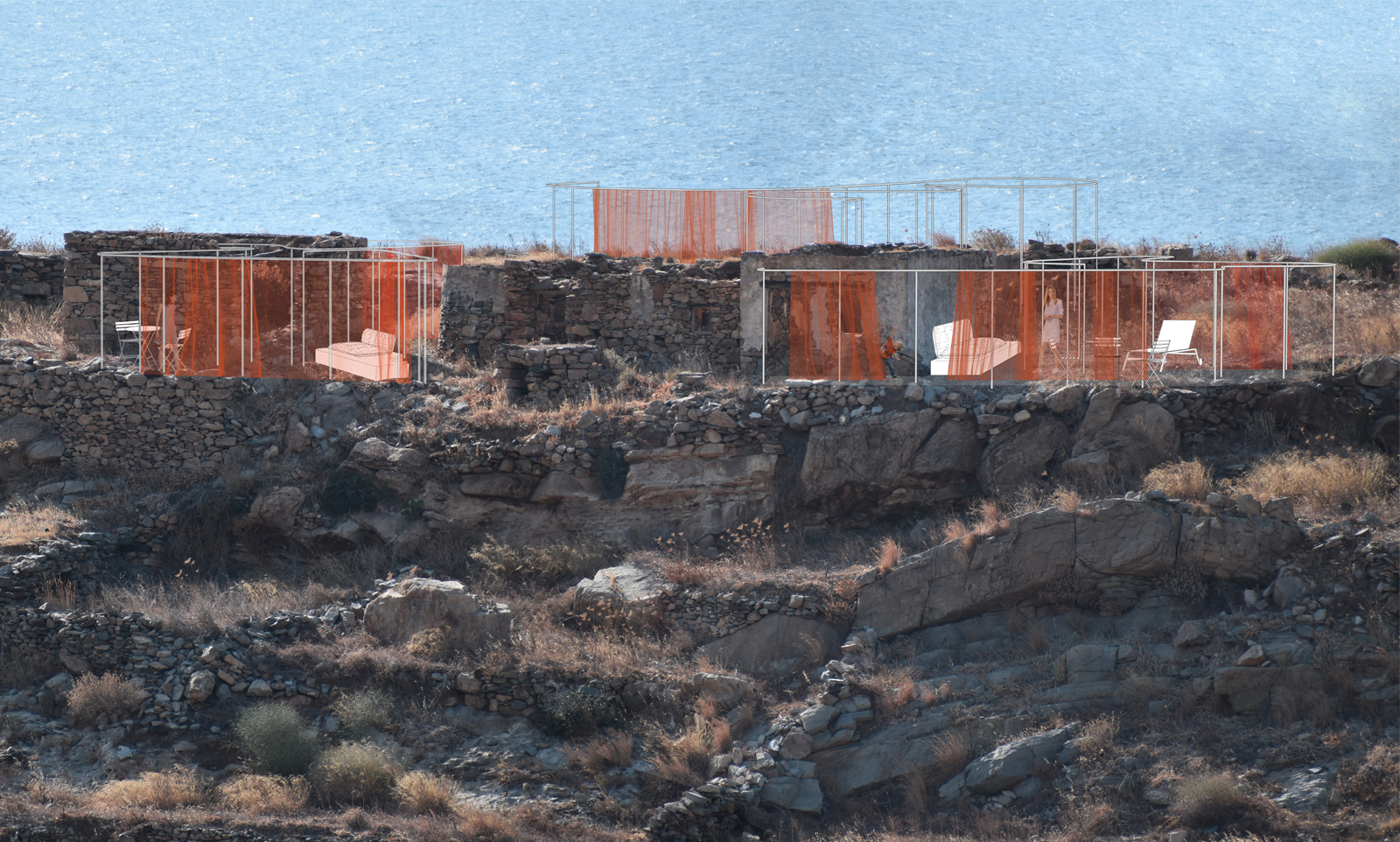 An alternative delimitation of functions takes place, with some residence’s parts being protected from the sun, while other are left exposed to the weather. Sun protection is held inside the ruins. As for the materials of the architectural operation, new wooden beams are used which are applied to the holes of the ruin’s original beams. An anhydrous sea plate is placed on them. This waterless material is chosen to be added to the pieces that require total shading and protection from possible rainfall. The shading is completed with the use of reeds, which are spread along the entire length of the beams. Following the remaining remnants of the ruins, the construction of the shading is placed in the areas that have been rescued and the fragmented parts of the houses are left free. The activities are accessible to each other, with a dividing element, the small elevation differences, such as a step. 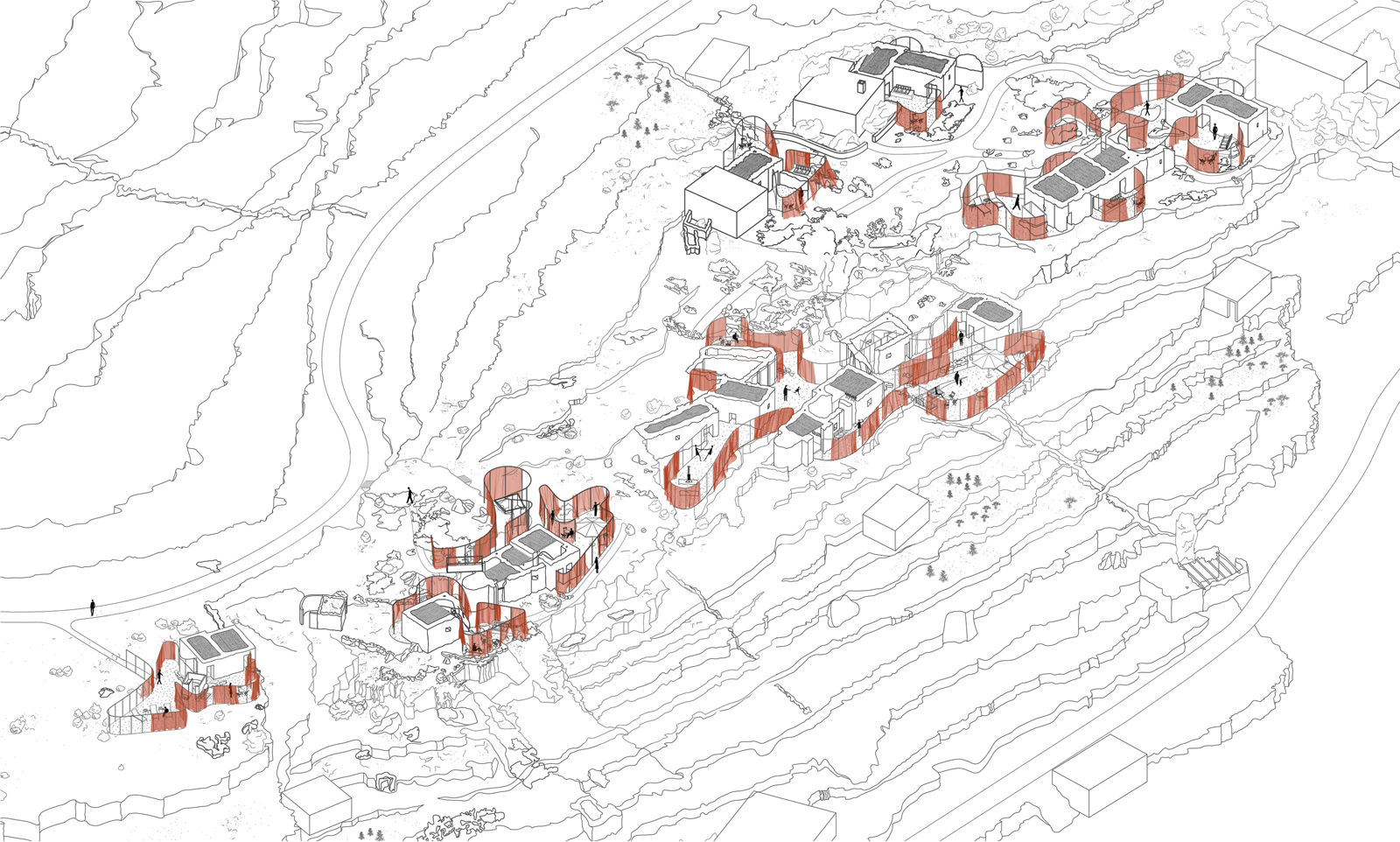 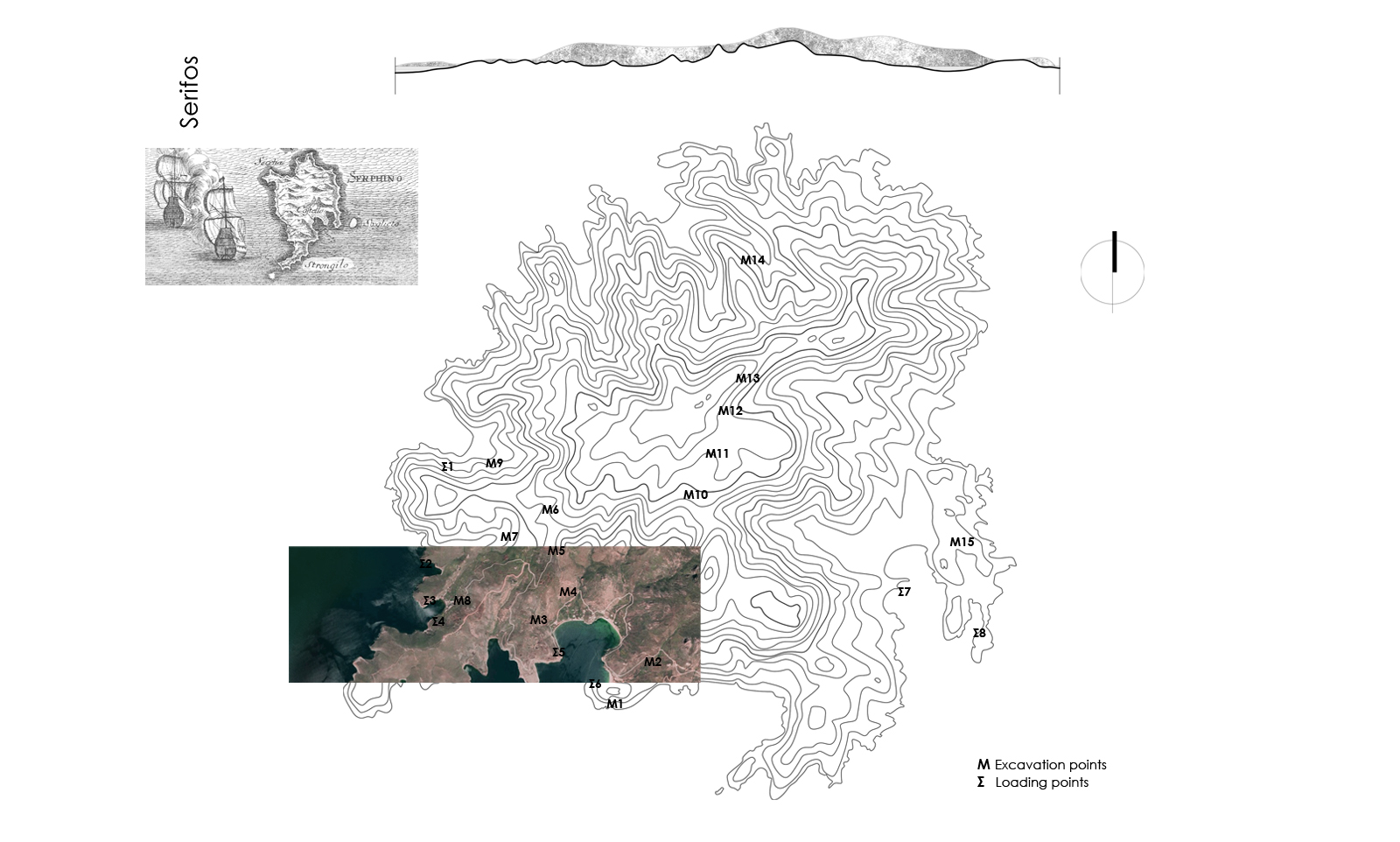 The design approach of the abovementioned intervention results from a conglomeration of elements capable of meeting the basic needs of the tourist. The humble architecture offers to the tourists, during their accommodation, a parallel contact with the ruin and the nature. The purpose of this new type of tourism is the revitalization of the abandoned buildings of the mining period of the area, utilizing the elements of nature, and especially the air. 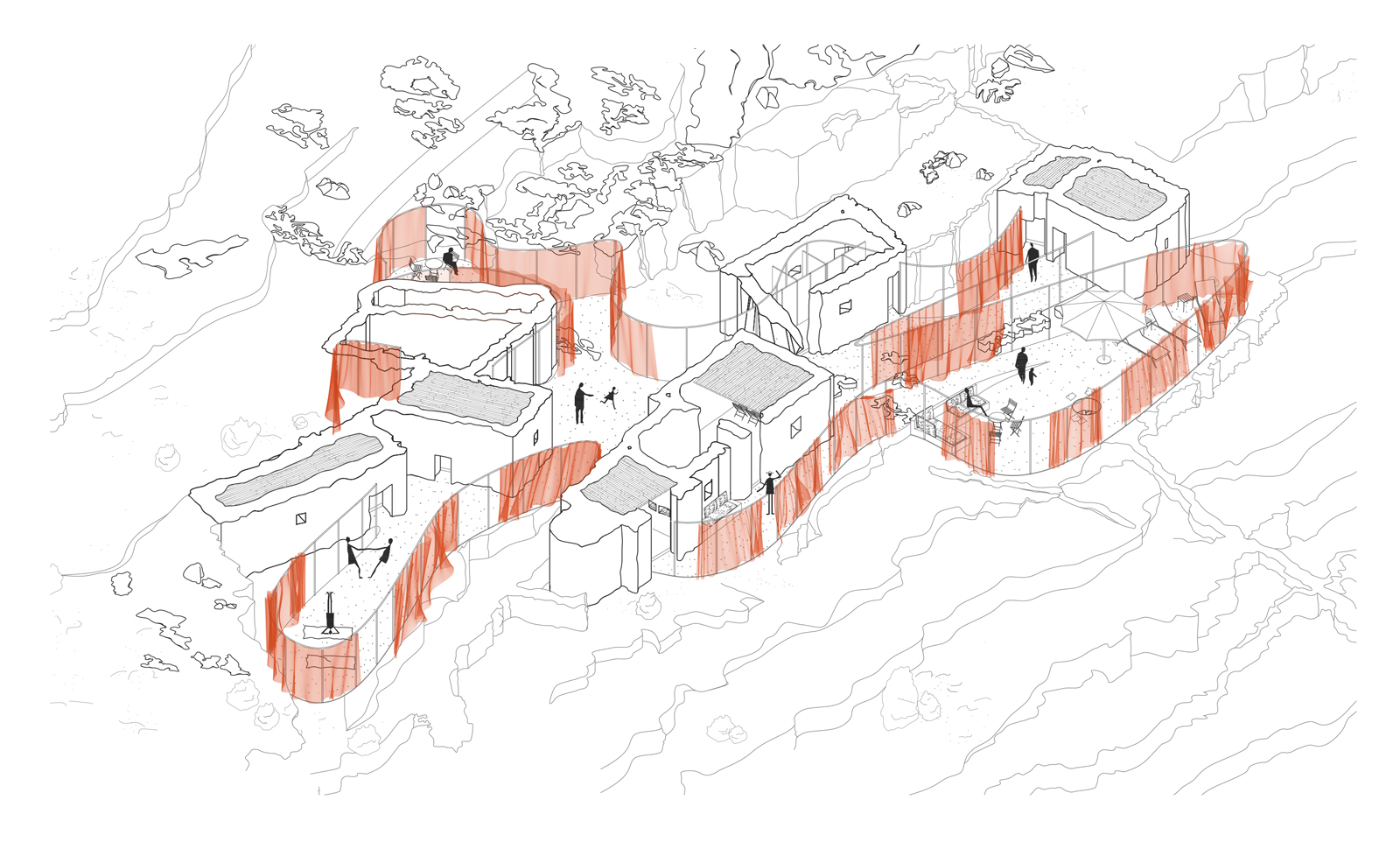 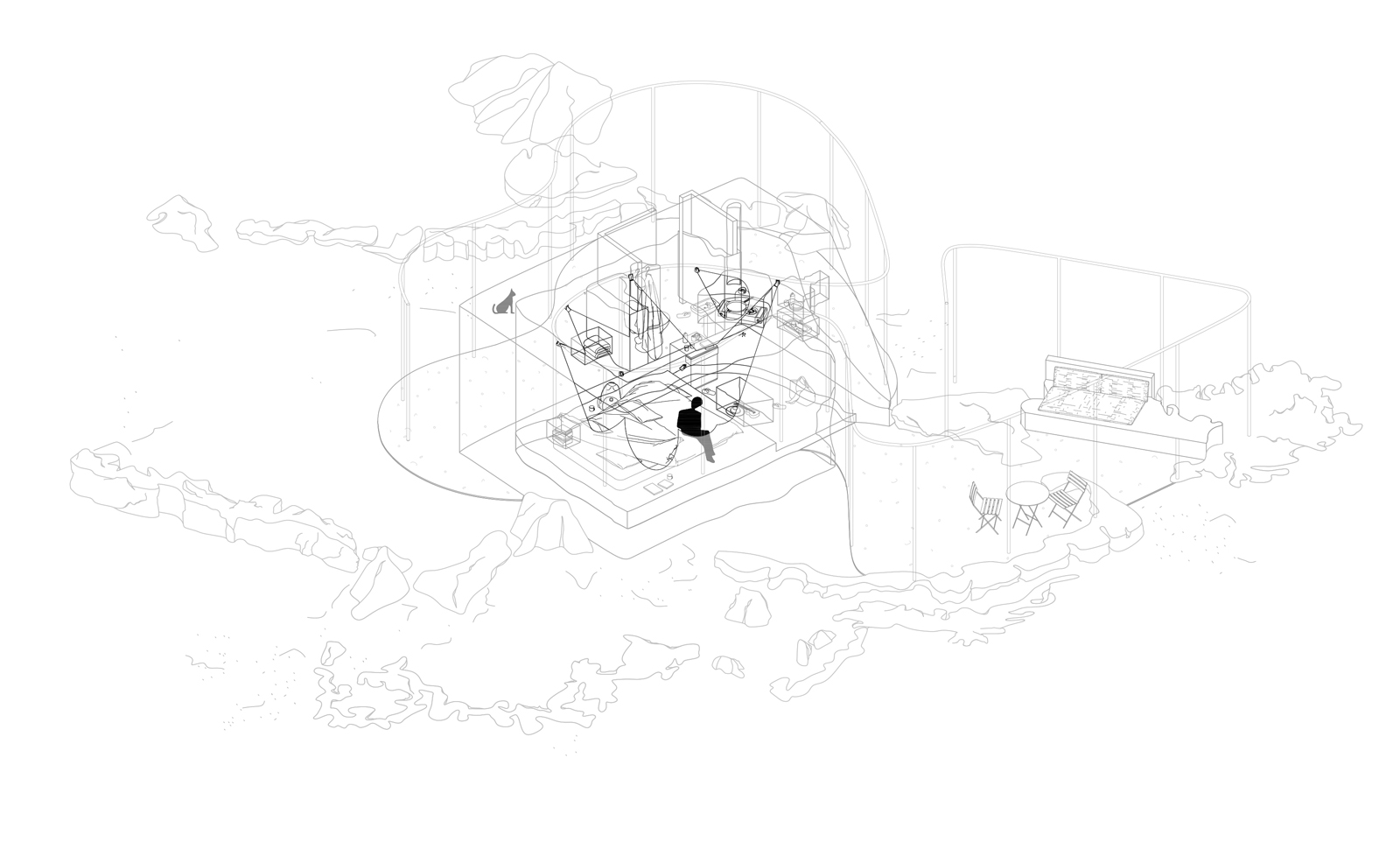 Against the fluid boundaries built by nature, the ruins, and the temporary structures that define the new type of habitation, the permanent constructions of the furniture are built. Simulating walls, solid concrete structures are defined under the anarchic rocks’ shape, defining a stable horizontal footprint, and protecting the non-collapse of dry-stone wall. A redefinition of the permanent from the temporary constructions takes place, the «walls» are created from a fluid material and the furniture supplants the heavy construction of the building. 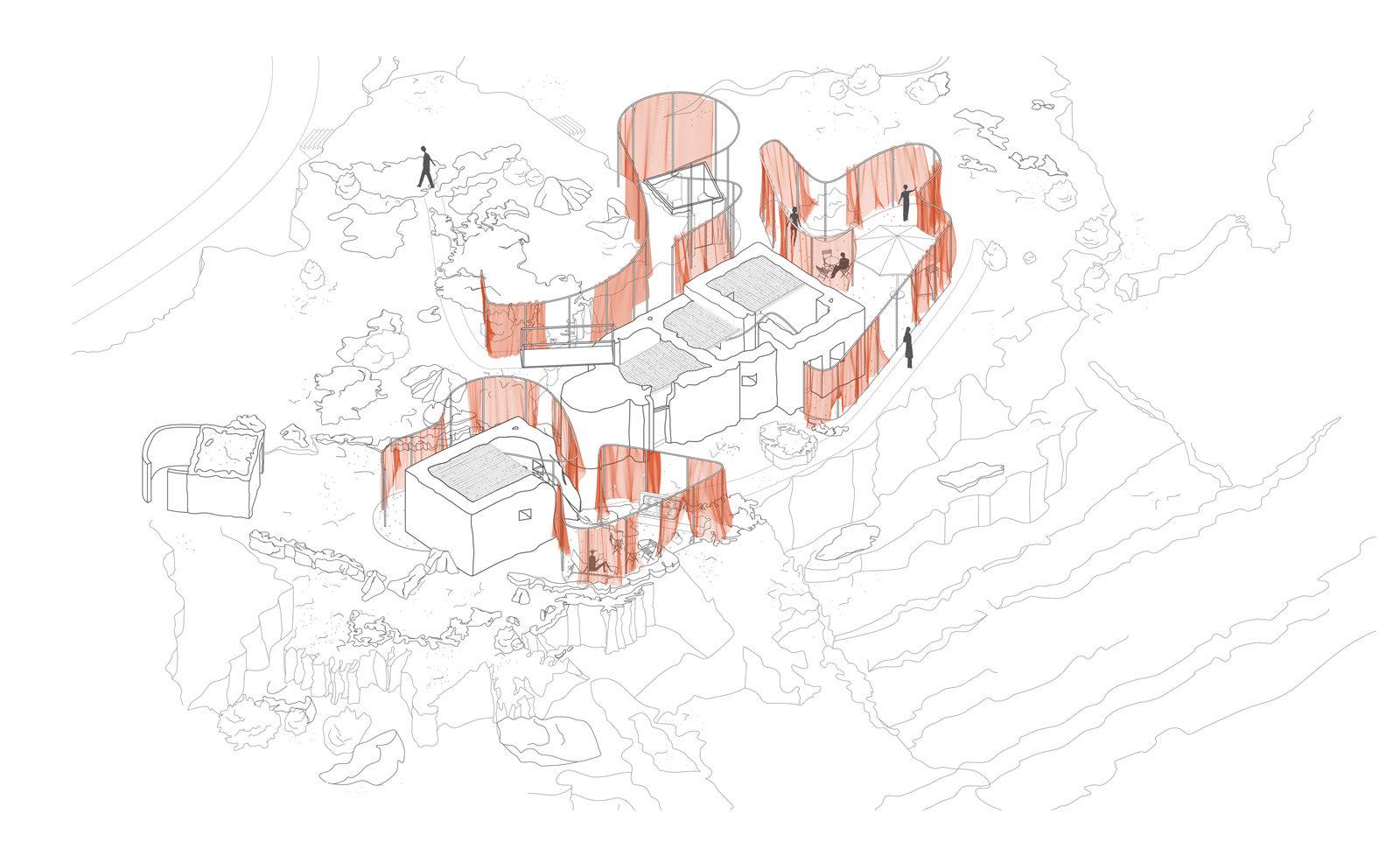 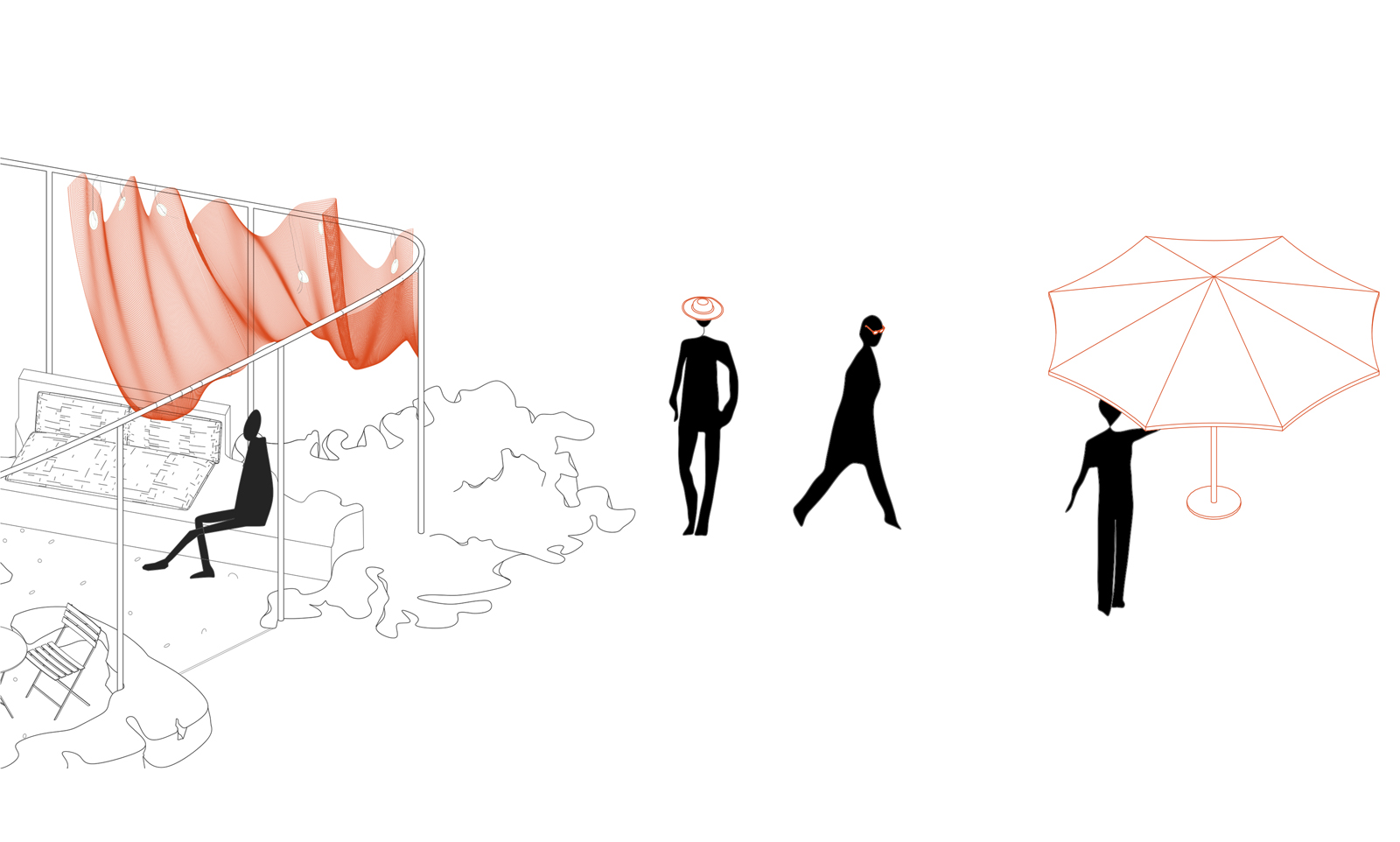 In the part of reuse, small cells attached to the houses are added. Cells’ initial use was to keep and protect the animals from the changing weather conditions. These minimal cells, with low height and minimal dimensions, are transformed into sanitary facilities for vacationers. For their operation, a piece of molded concrete is added around the perimeter of the walls to increase their height and a door that fits with a swivel. 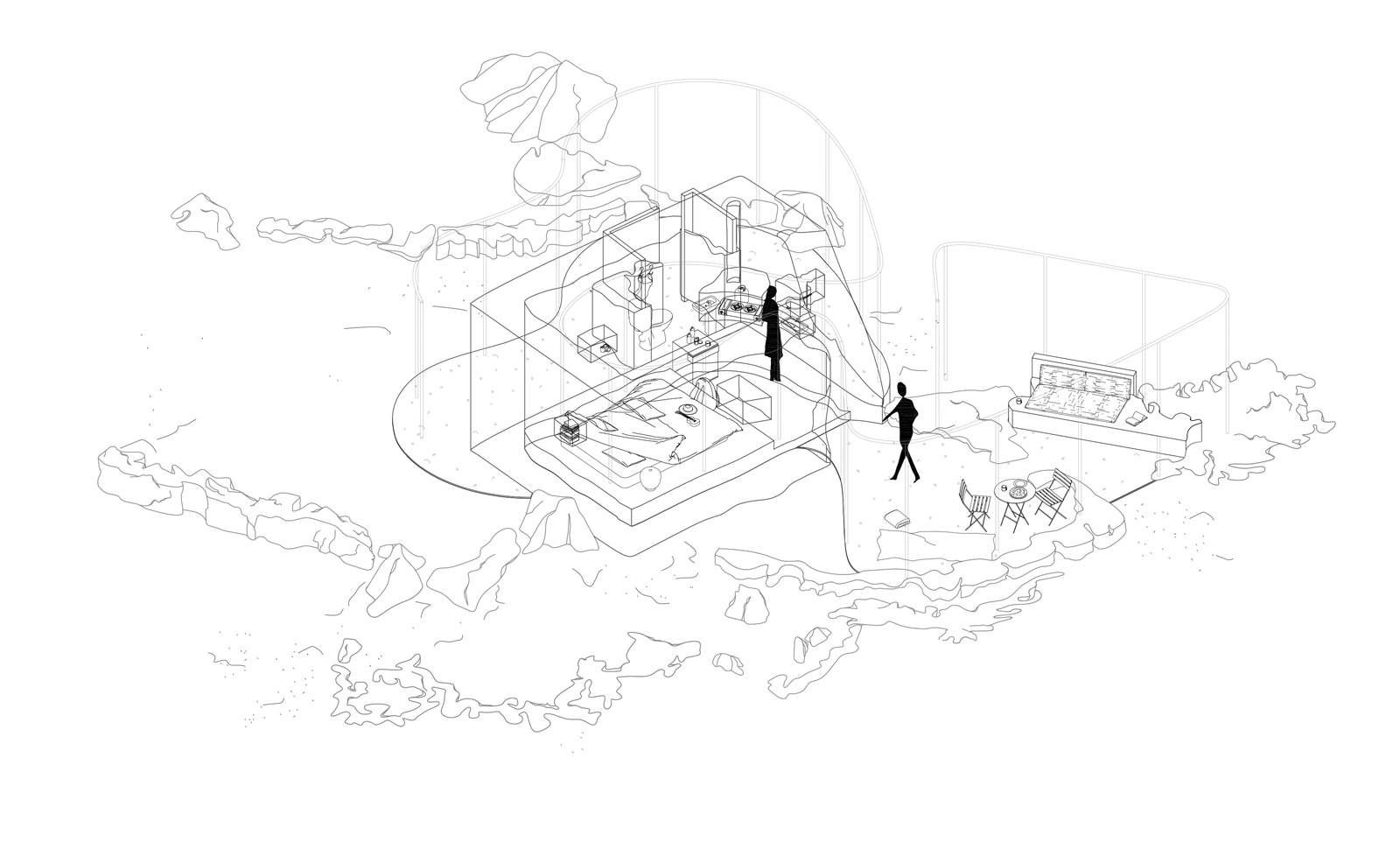 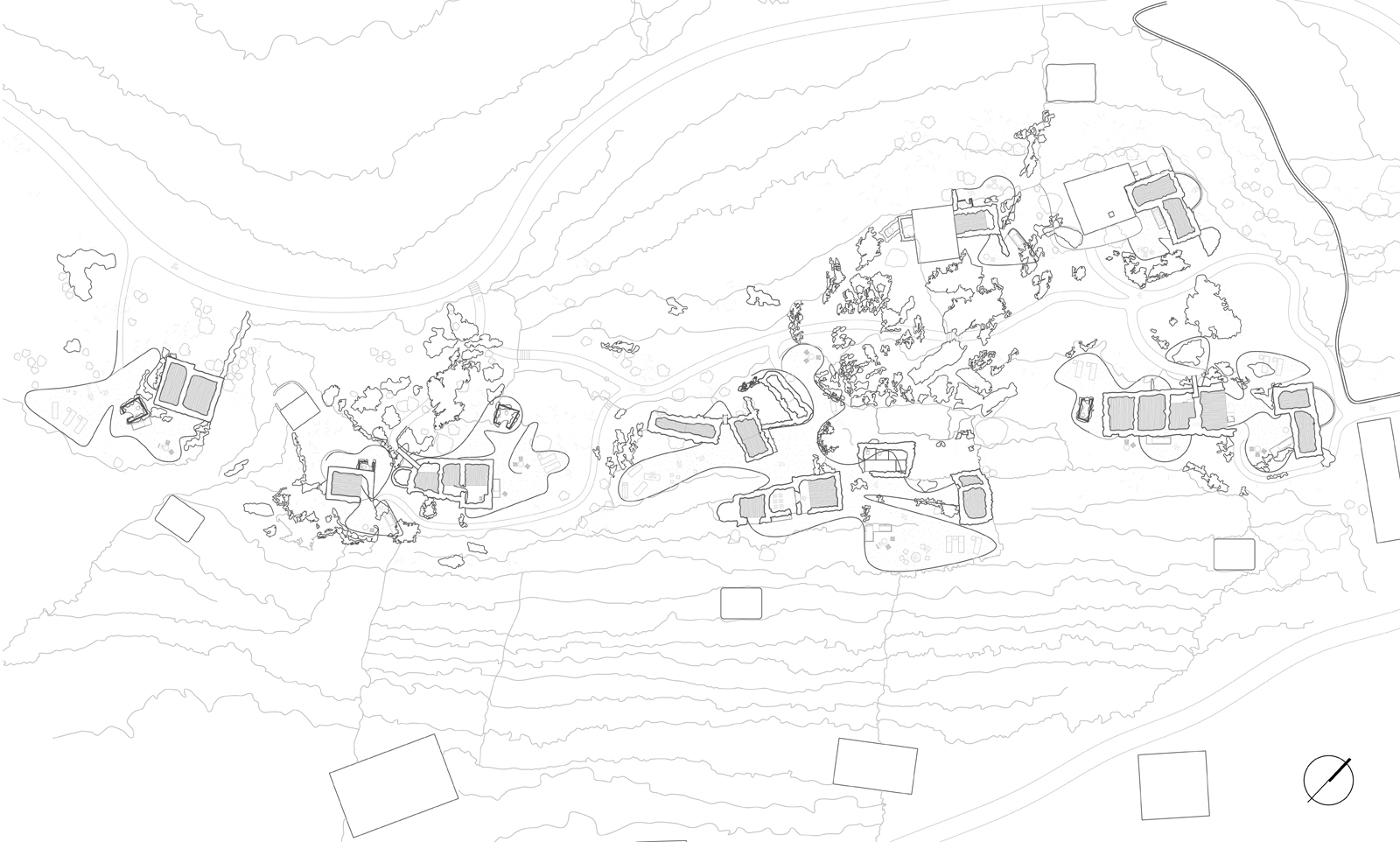 By extending the already existing route within the area of ​​the workers’ residences, we create a path free of bushes and dry grass. This introduces and leads the walkers to the scattered houses, from the village and vice versa. As if the trail generates roots and spreads all over the mountain. The path is interrupted by the smooth and accessible horizontal rocks, which become part of it, sometimes interrupting it, and sometimes forming a connection between two parts of the route. 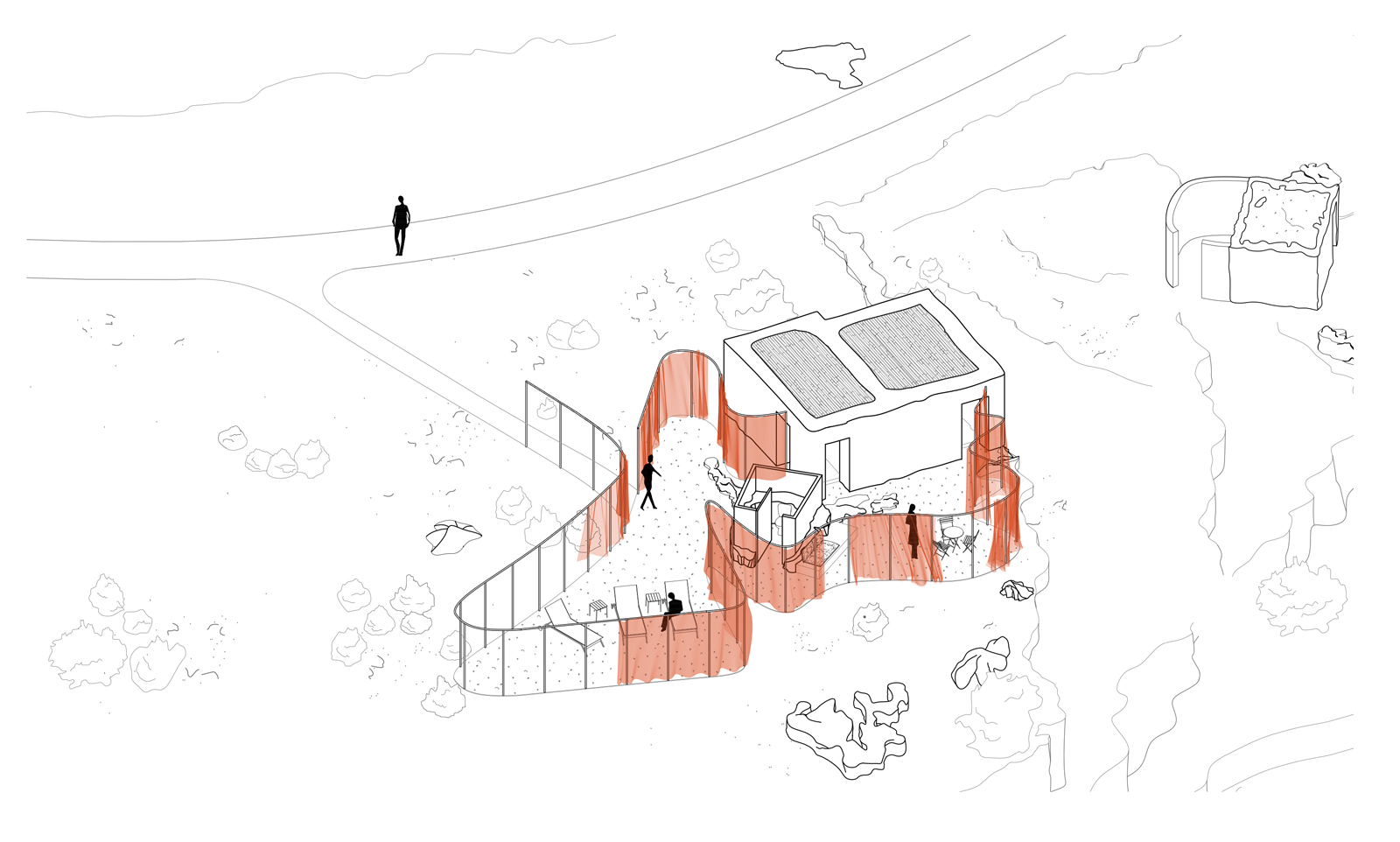 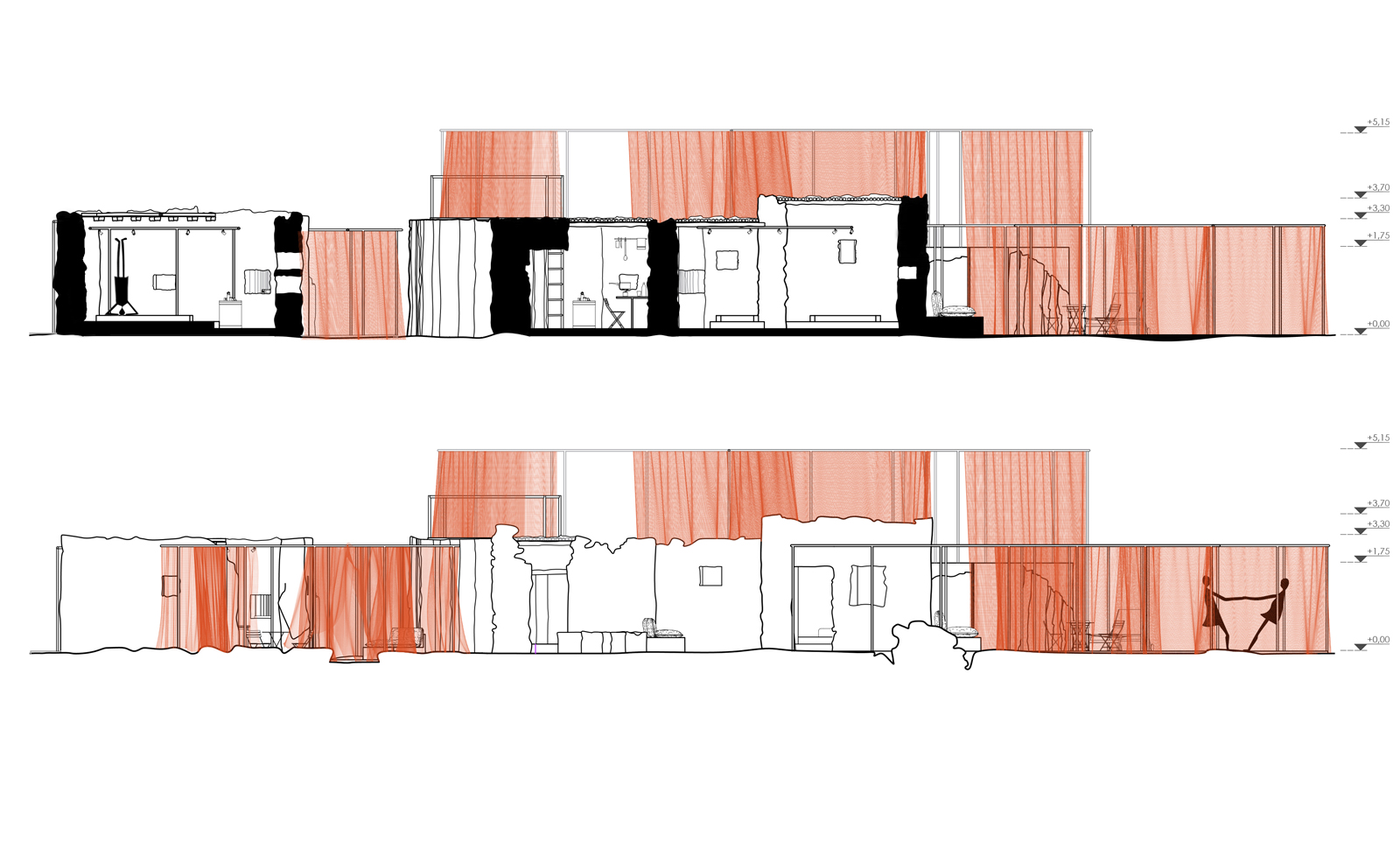 by MELINA ARVANITI-POLLATOUArchisearchhttps://www.archisearch.gr/wp-content/uploads/Picture3-370x700.jpg
SHARE THIS PAGE
WITH YOUR FRIENDS