On the occasion of the upcoming Architecture & Design Film Festival  first appearance in Athens, we talked to Katherine Knight co director of Strange and Familiar: Architecture on Fogo Island which will be screening as the opening night film on April 27th at the Benaki Museum (Piraeus Building).

Strange and Familiar: Architecture on Fogo Island  is an hour-long documentary that captures a bold architecture project on Fogo Island, Newfoundland that embraces the excitement of living on the edge, both in relation to nature and to contemporary design. A beautifully shot film that captures the stunning landscape and extraordinary architecture that makes up the project. Featuring Zita Cobb of the Shorefast Foundation and Todd Saunders, a Newfoundland-born, Norwegian based architect. 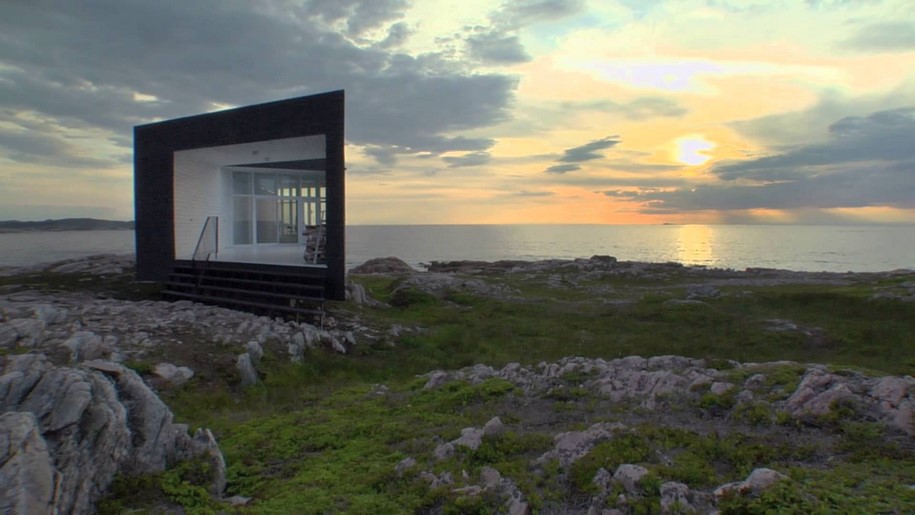 The Fogo Island Inn sits perched on the shore of this rocky outcrop off the coast of Newfoundland, along with four sculpture-like artist studios. Designed by Gander-born architect Todd Saunders, their bold contemporary lines seem at once alien, and at home, in the ancient landscape. Gorgeously photographed over four seasons as the Inn is being constructed, the film features interviews with Saunders and Zita Cobb, a Fogo Island-born social entrepreneur who spearheaded the architectural commission as a way for the remote island to redefine its place in the world.

How did it all started?  What inspired you in Zita Cobb’s story?
It all started with architect Robert Mellin’s 2003 book, “Tilting: House Launching, Slide Hauling, Potato Trenching, and Other Tales from a Newfoundland Fishing Village.” The book put Fogo Island on my radar. Mellin describes vernacular architecture through anecdotes of the buildings and their owners. I visited and stayed in Mellin’s tiny saltbox house. At one point a pony was moved from the backyard to the front yard through the house. The landscape, the evidence of practical, traditional knowledge and the generosity of people amazed me.
Time spent with a close friend in Western Newfoundland also underscored the intense loyalty Newfoundlander’s have to their island “rock.” When I heard about Zita’s project, these past experiences coalesced. I knew a film could be made.
I was drawn to Zita’s ambition to do new things with old ways and her willingness to shake things up. Zita sees the island and its people as resilience, creative and equal to challenges.

How much time did you need to record and to get all the footage for the film?
Co director and cinematographer Marcia Connolly and I made 10 trips to the island over 3 years in all seasons and all weather. The longest trip was two weeks and the shortest was 4 days. 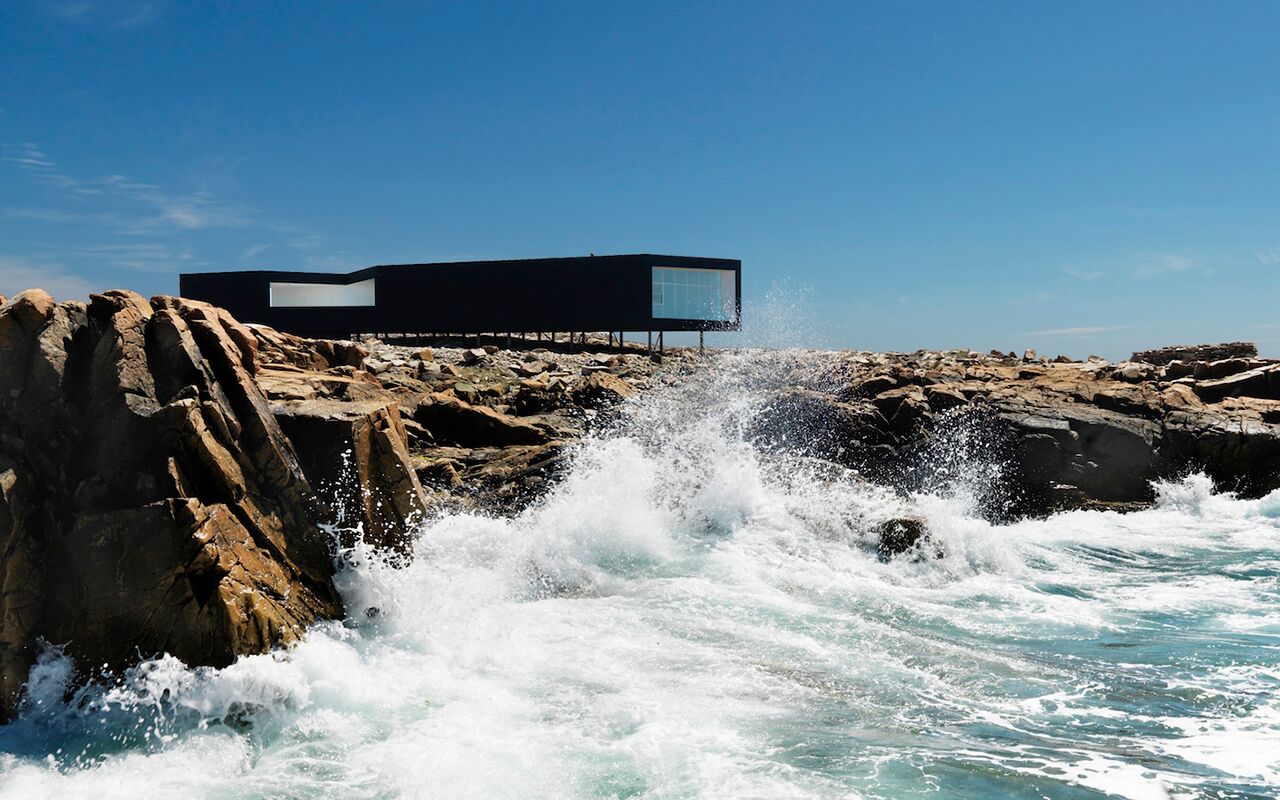 What was your greatest challenge in making Strange & Familiar: Architecture on Fogo Island?
We were an independent production company, a two person crew with a very tight budget. Marcia shot every moment of footage. We didn’t carry extra light or sound gear beyond essentials. Marcia’s drive for excellence gave us the intimate footage that connects viewers to the story. We made the film alongside our other jobs and responsibilities. Organizing from afar didn’t work well for us so we had to be nimble and respond to situations as they arose. Each trip was full of surprises and challenges. We relied on local residents for advice and support. Individuals were incredibly helpful. The
physical effort of making the film sometimes felt like a marathon run that might not end. The first trip including hitting a moose, losing a car and not giving up.

“I didn’t understand buildings as activators before this film.”

What aspects of Fogo Island project were you looking to cover?
Marcia and I both wanted to capture the stories of islanders involved in building the inn.
We wanted to anchor the future potential of the inn to the labour, love and knowledge of the people of Fogo Island. We definitely wanted to connect Todd’s contemporary treatment of space to his awareness of traditional materials and form. We wanted to honour the links ZIta and Todd were making between vernacular architecture, craft and contemporary experience. We wanted outsiders to fall for the island.

The project behind Strange & Familiar: Architecture on Fogo Island is about the desire and hope of Zita Cobb to “be home, stay home and flourish as people and as a culture at home”.
What is home for you?  In your opinion, what was the role of architecture in that ambition?
Home is where my creative spirit feels nourished. I live half time in my spiritual home of rural Nova Scotia and half time in my working world of Toronto. My artistic practice is anchored in eastern Canada and need connection to ocean and vista. Architecture helps structure my access to landscape by putting me in the right spot.

Have your own personal views of architecture changed after filming Strange &Familiar: Architecture on Fogo Island?
Yes. I didn’t understand buildings as activators before this film. I previously defined place exclusively through landsacpe. Observing the inn arise on the land helped me understand buildings as not just shelters and containers but as co participants in experience. Personally I aspire to graduate from being a person who perches in houses and workspaces to becoming fully anchored in a space that I love.

What do you hope viewers of Strange & Familiar: Architecture on Fogo Island will take away from it?
A desire to experience the island first hand is our top hope. Observing and celebrating the history of place is a skill that’s worth nurturing. I hope our film contributes to that. We see the film as an ambassador introducing Fogo Island to others around the world.

The first appearance of the Architecture and Design Film Festival in Europe, will take place on Greek territory, and more specifically in Athens at the Benaki Museum (Piraeus Building), and is the result of the collaboration between Archisearch.gr and Demand, two significant agents that have developed over the past few years, a continuous dialogue with the world of Architecture and Design.

ADFF: ATHENS 2018 will take place from the 27 th of April to the 29 th of April, 2018, and will complement the screenings of the films with several events. The Greek audience will have the opportunity to watch films that reflect the most contemporary and innovative instances of global architecture and design, to attend interesting discussions and to engage with distinguished guests, who are involved in the two fields at an international level.

by VALIA KAVALLAArchisearchhttps://www.archisearch.gr/wp-content/uploads/villa_p_potiropoulos-5-370x700.jpg
SHARE THIS PAGE
WITH YOUR FRIENDS