Alphaville Architects designed a small house for a couple in Japan. The architects had to deal with cost limits, as well as with the distorted shape of the site.
-text by the architects

A young couple needed a house to enjoy their spare time, such as weekends or night-times, having nice meal, enjoying films and playing billiards, which requires a large space with, soundproof.

So the first thing to question was how to get a hall at least spanning 6m, preferably of reinforced concrete, within the budget.

The second challenge was to fit this hall into the distorted shape of the site, formed of remains of building lots from two housing land developments, which meet at an angle of 20 degrees, and the sloped road in front of it creating 1.5m difference in height from the one end of the site to the other. 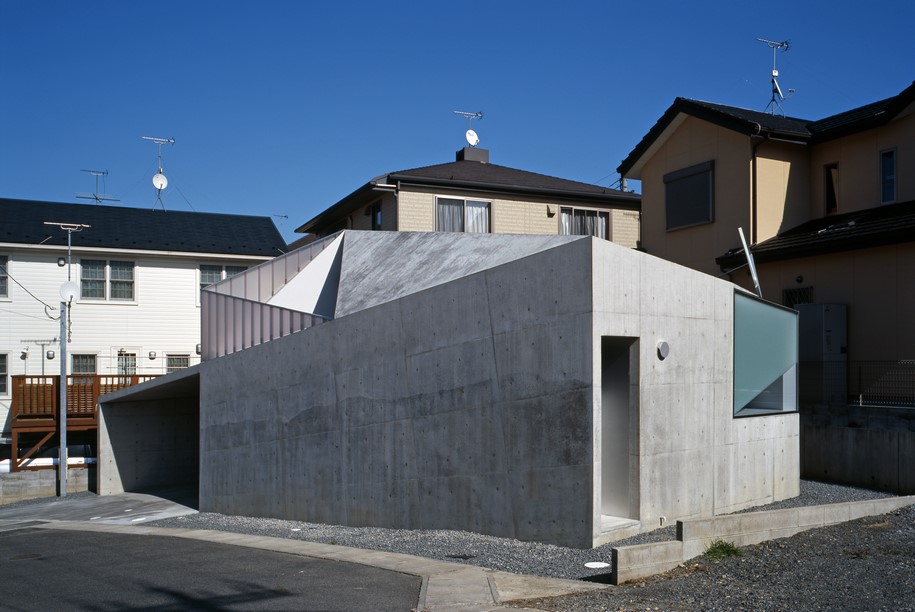 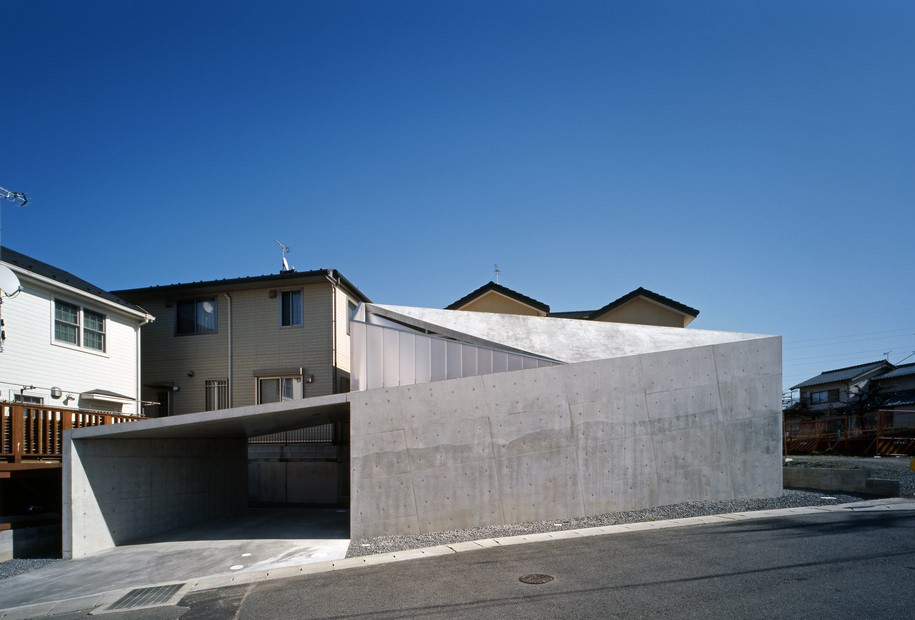 Alphaville Architects formed the interior space of the house along with this sloped road, putting parking lot at the lower end, the billiard -theater through the entrance, dining-kitchen at a half-floor level going up the broad stairs, which served also as a seat for a home-theater, allowing them to watch images on a huge screen-wall at another end of the billiard hall, over the billiard table.

As the client needed no isolated space, a bedroom with a bathroom is situated also at a half-floor level going up from the dining-kitchen, which means all the interior space of this house forms one long inclined hall of 6m wide. 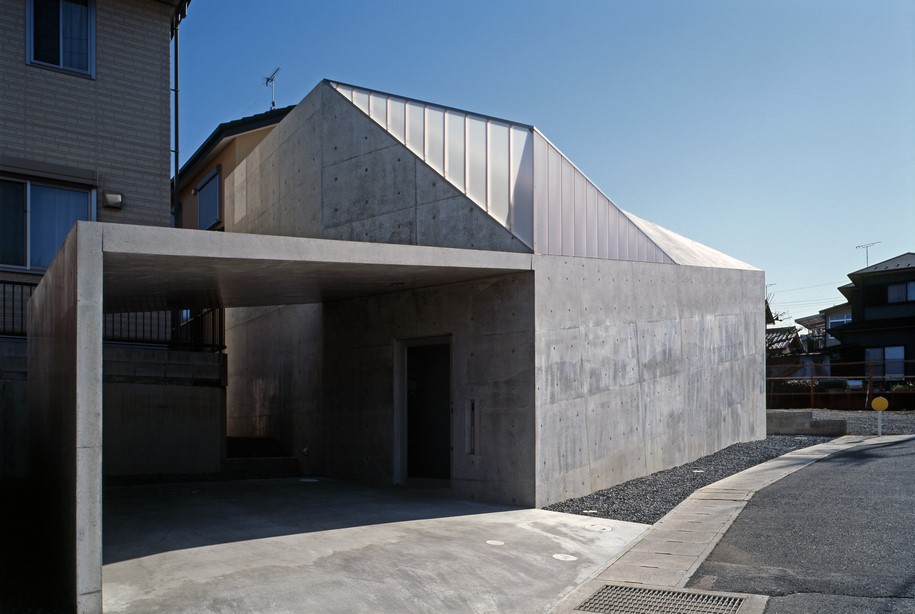 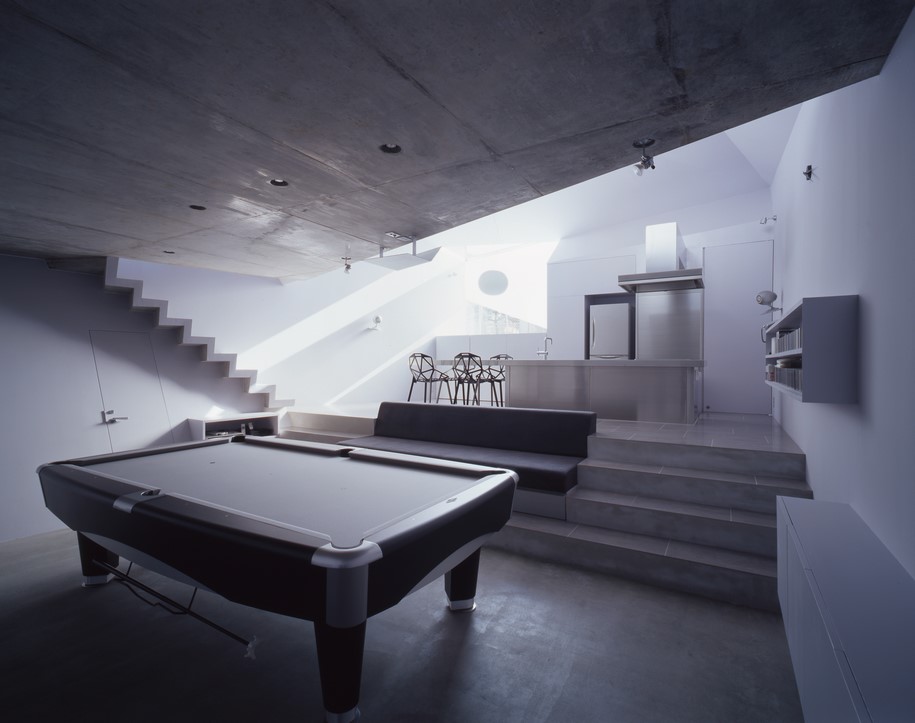 To fit the building into the irregular shape of the site, Alphaville Achitects bended this hall at an angle of 70 degrees, at the end of the dining-kitchen as to put the bedroom onto the billiard-theater slightly off to the side, and the gap of the first and the second-floor became the terrace open to the broad view of schoolyard next to the site, letting the light plentifully into the whole house through bathroom surrounded by glass wall.

All the rest of the windows that this house has are only one at the dining-kitchen where the hall bended and the door at the entrance, so that the interior space is not disturbed by passers-by on the road along with the hall. 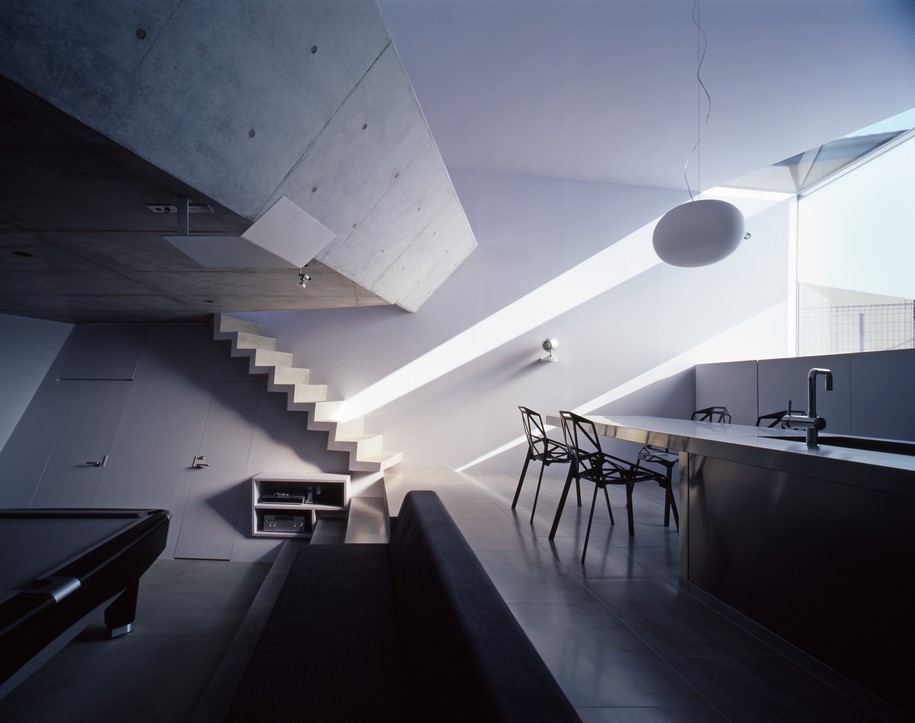 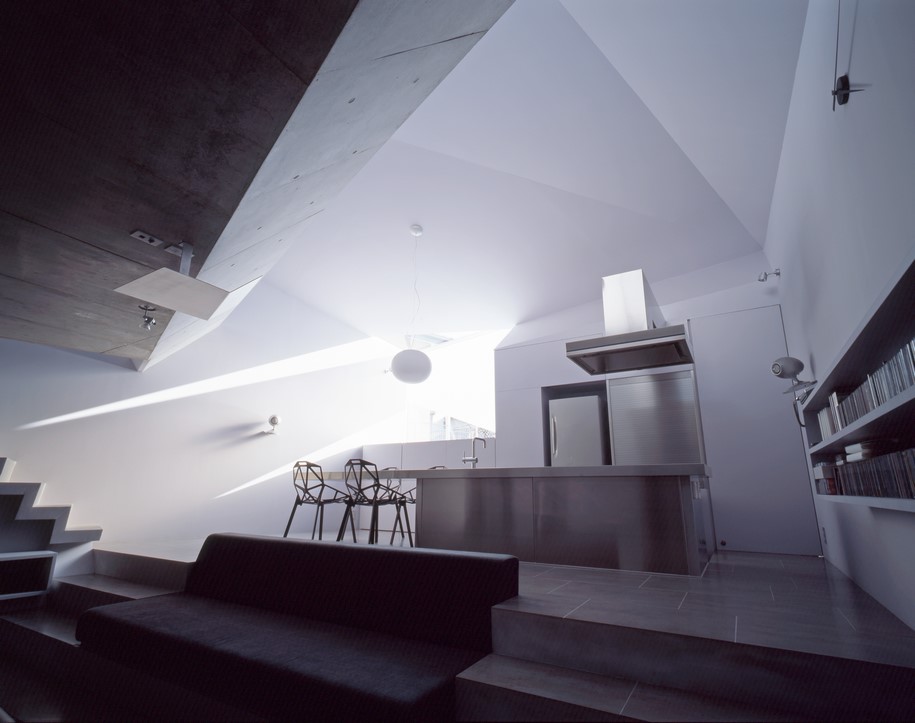 In spite of the exclusiveness of the interior space, sloped roof provide inhabitants a garden to sit and look over at the level of the roofs of surrounding houses, where they can reach from bedroom through a slope behind the house.

To realize thus formed pentagonal plan and inclined shape of the roof, Alphaville Architects adopted a monocoque structural system of reinforced concrete, which means to envelop the hall with concrete walls and slabs of approximately 180mm-thick, the least to cover the 6m span of the hall, and a special water repellent, by spreading into concrete slabs and walls, which allow us to let the rainfalls run down from the roof to a gravel-covered ground into underground drains, using no parapets nor gutters. 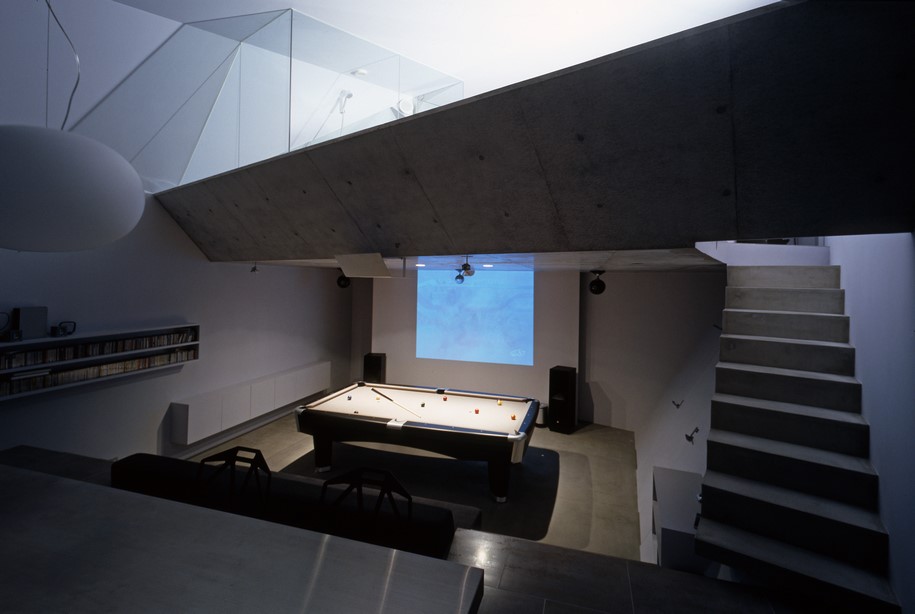 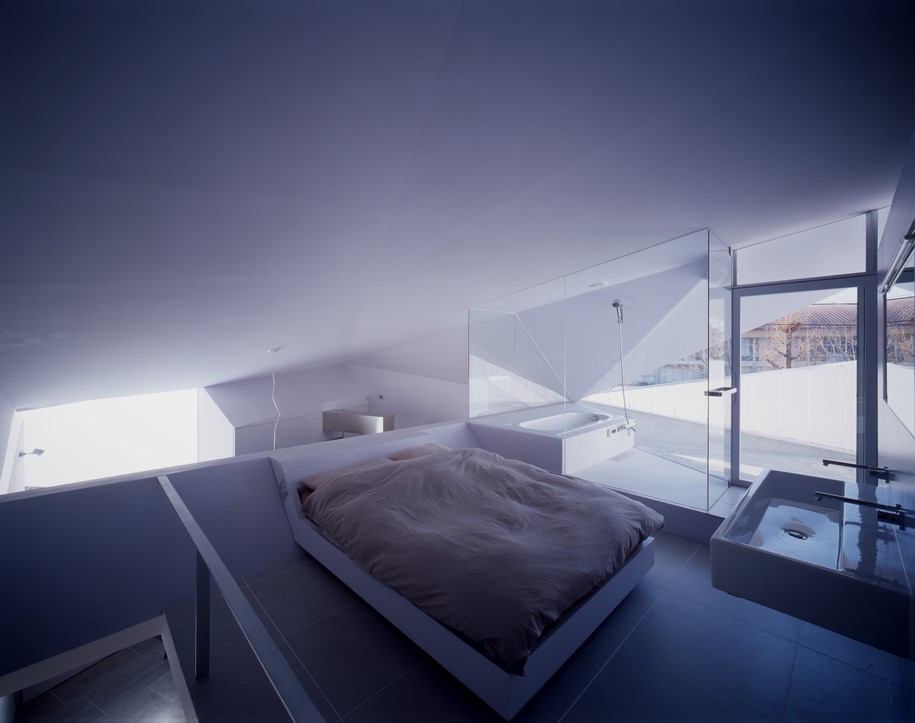 Besides, the beam at the end of the second-floor slab inclined at an angle of 45 degrees helps to bind two walls along with serving as a headrest of the bedroom, and the roof folded into three slopes enables a concrete slab to cover this long span without a beam, that gives adequate ceiling height for each spaces as staircase, bedroom and bathroom. Thus, we cooperate with a structural engineer using 3-dimensional models, 3d-CAD, and 3d structural analysis soft along with the architectural form required. 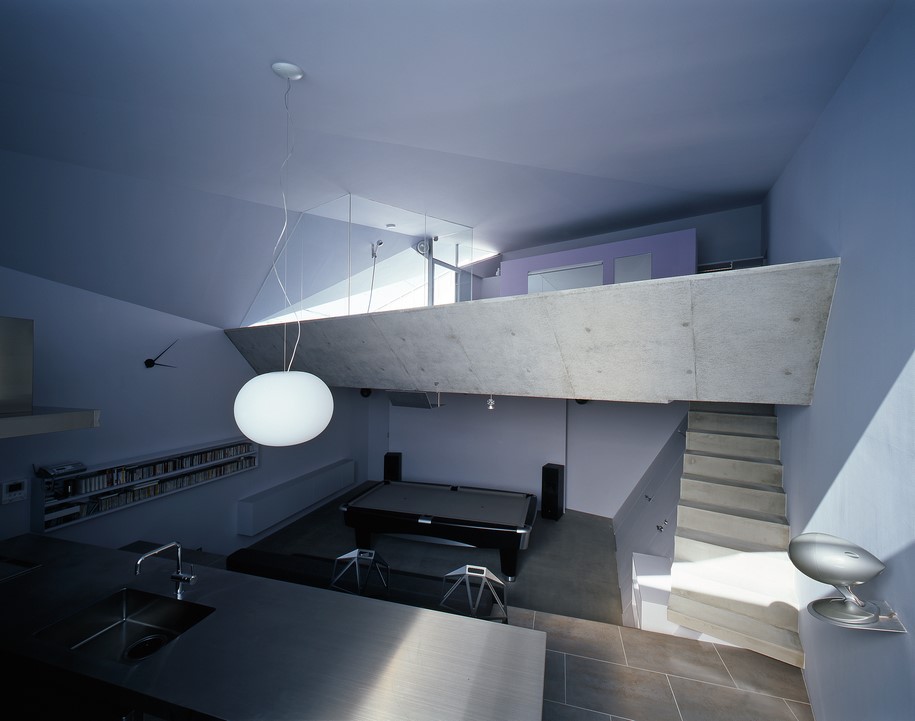 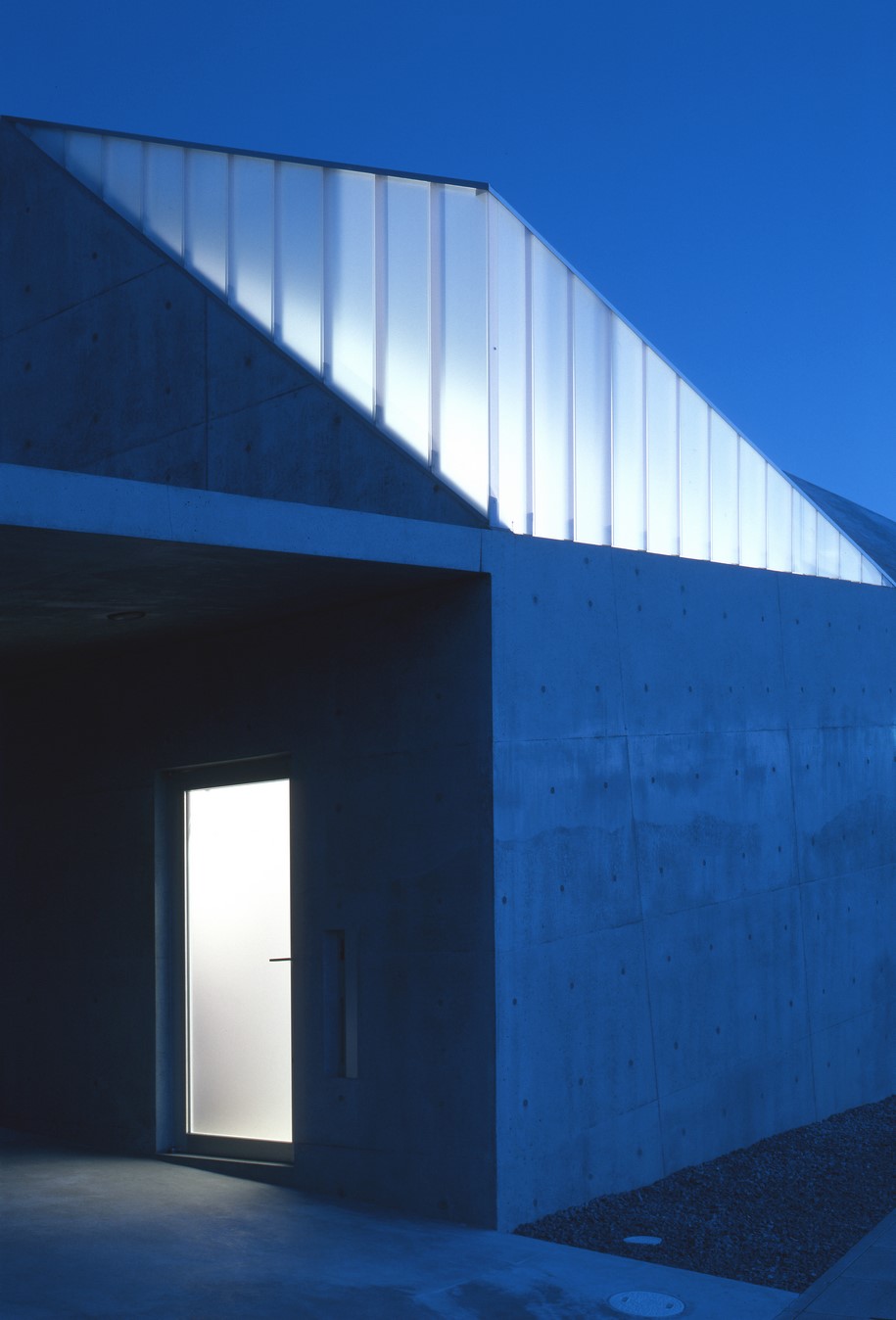 In this project, we tried to exclude our arbitrariness using general conditions or client’s requests as various parameters to form the space. And in this case, as the scale of the building was not huge, the exterior form can directly express the structure, which envelops the interior space, and this monocoque structural system of reinforced concrete allowed us to express the individual need to external circumstances. 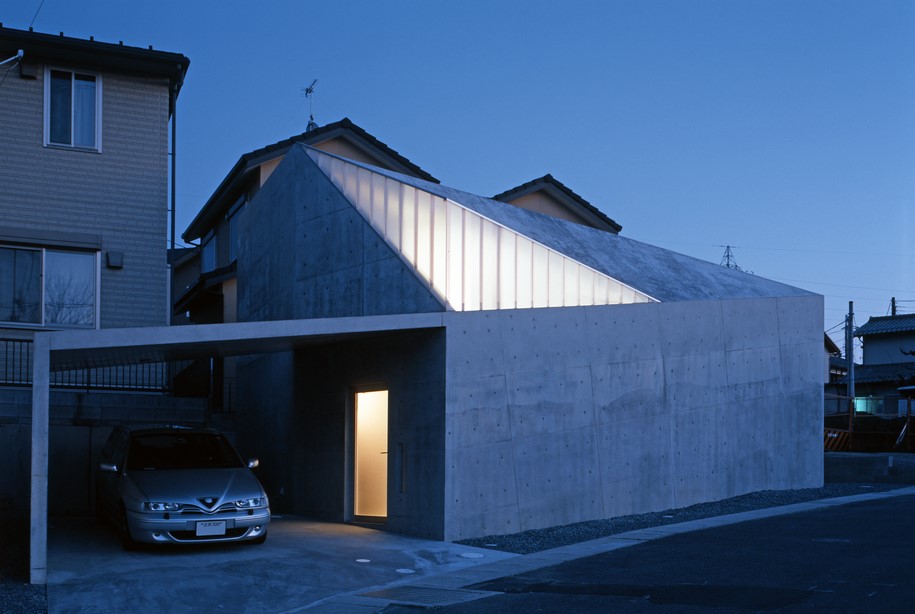 by ELPIDA ROIDOUArchisearchhttps://www.archisearch.gr/wp-content/uploads/01.-Residential-building-in-Kifisia_Kordas-Architects-370x700.jpg
ARCHITECTURE 11MAY 2021

by ANGELIKI ASIMAKOPOULOUArchisearchhttps://www.archisearch.gr/wp-content/uploads/20201010-HOUS3-ARQUITETOS-MORADIA-SANTO-TIRSO-048-370x700.jpg
INTERIORS 10MAY 2021