Bureau de Change have reimagined the conventional terraced-house extension for a home in North London with an innovative addition that both celebrates and elevates the humble brick. 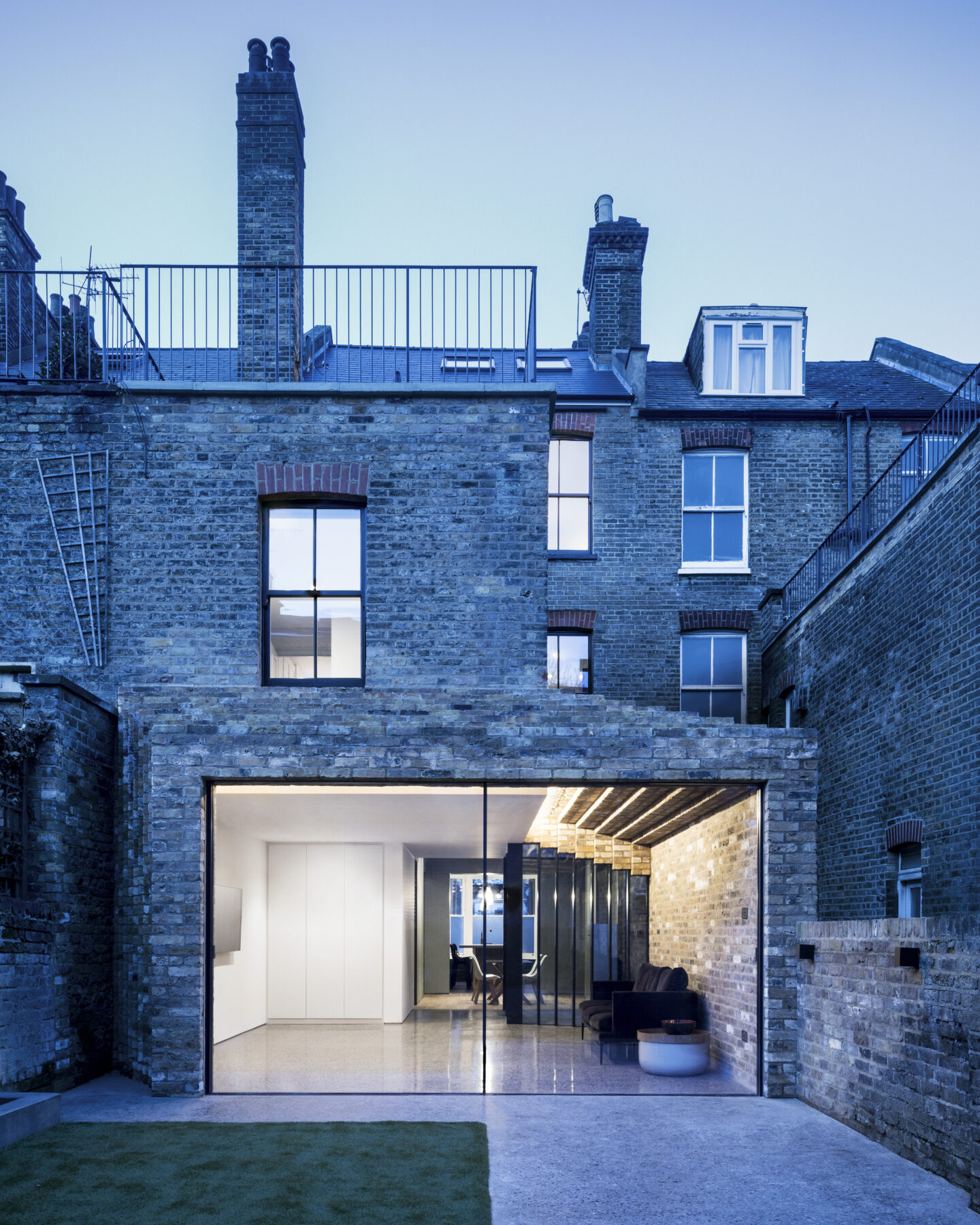 Katerina Dionysopoulou, Co-Founder of Bureau de Change explains: ‘Instead of the more expected glass structure, we looked to the brick and its inherent potential as a stackable module to create a far more sculptural material expression. Using bricks reclaimed from the fabric of the house, we exploited the rights of light diagram to create a staggered, extruded form that appears to melt away from the existing structure.’ 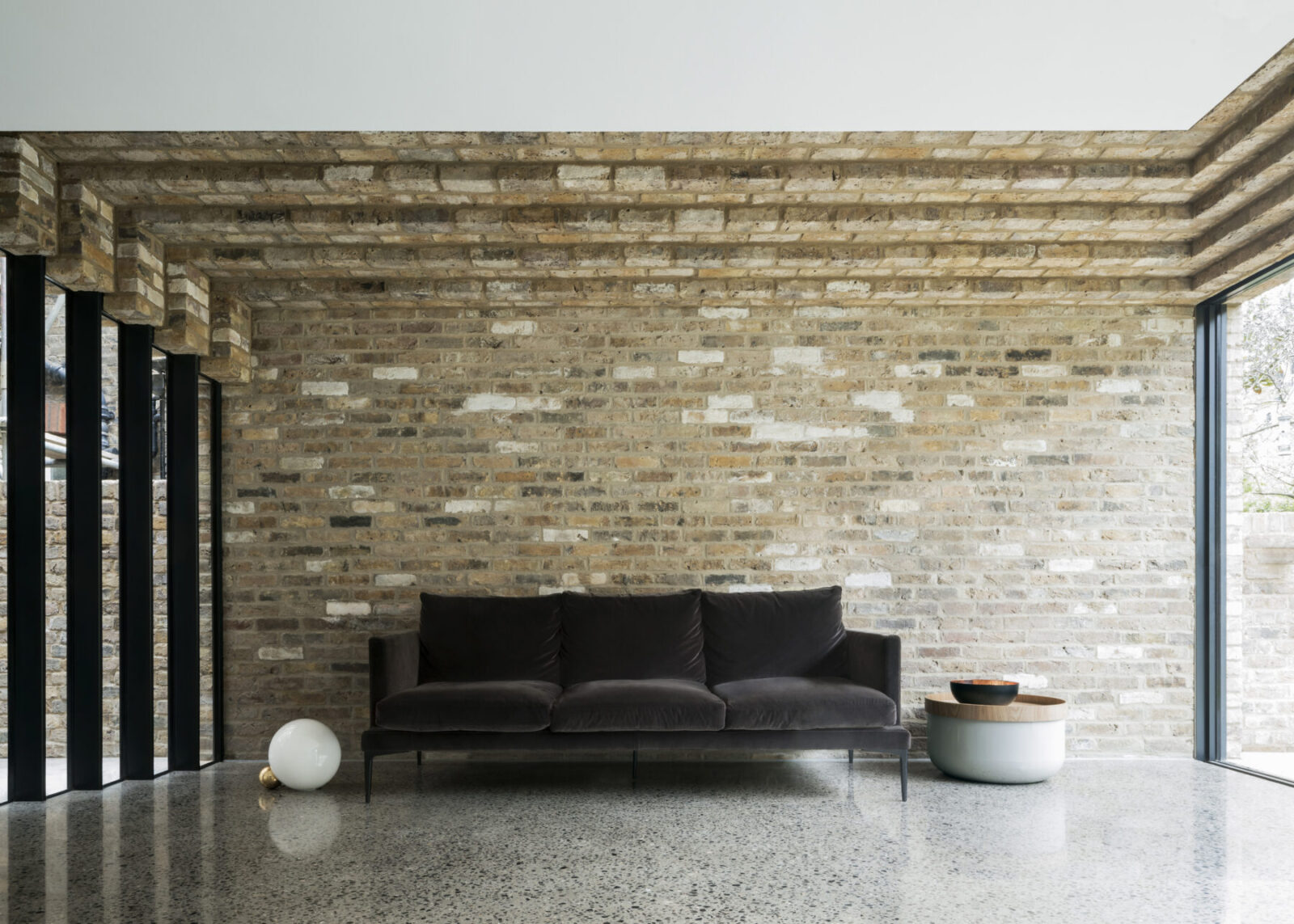 This rhythmic stepping generated by the brick is echoed throughout the interior, and is integrated in both the plan and section of the extension. 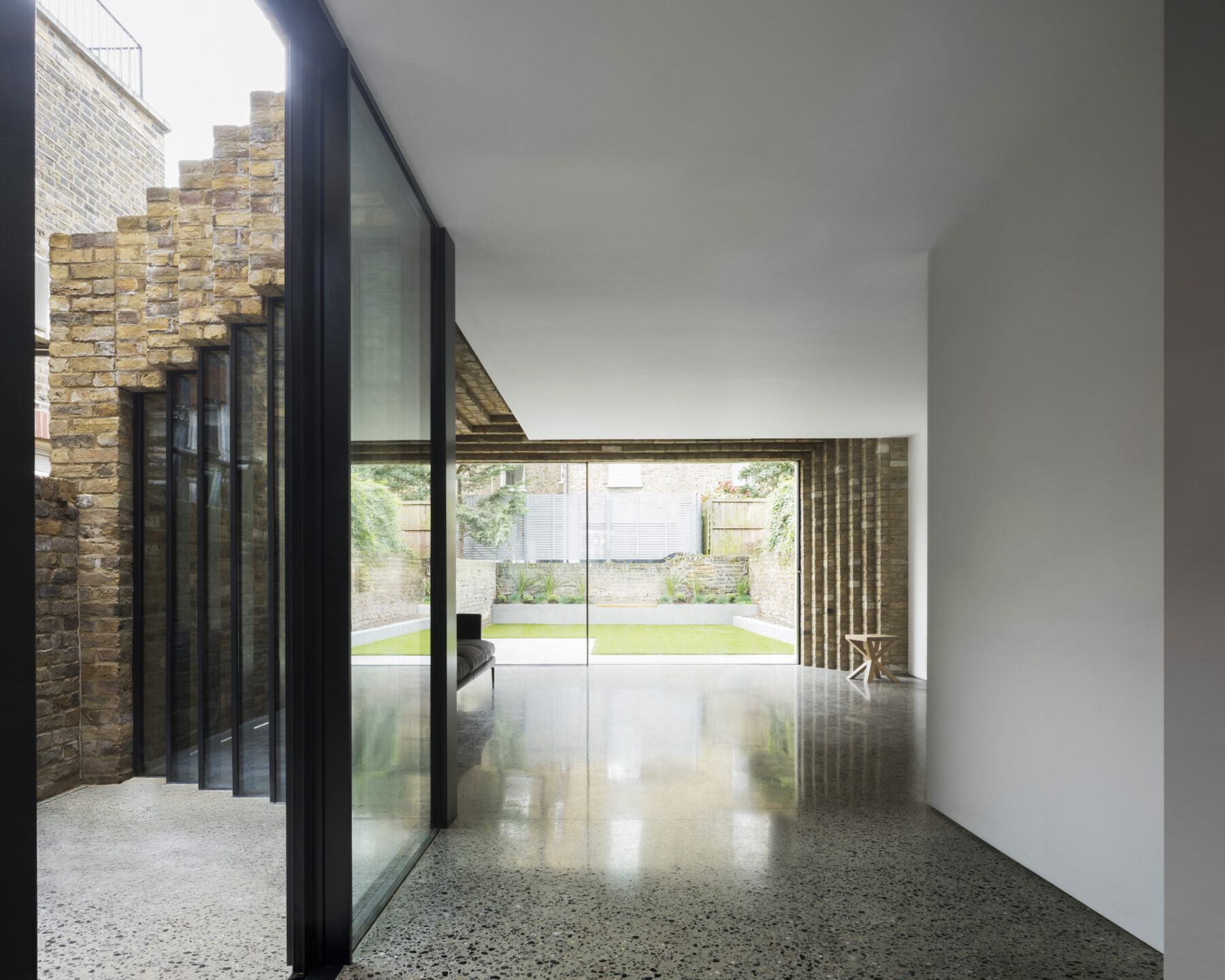 Viewed from the terrace above, the form creates an attractive silhouette – a feature rare in more straightforward additions. Inside, Bureau de Change’s characteristic dramatisation of space comes into play with a careful sequencing of spaces – transforming the expansive ground floor into a journey through carefully designed ambiences. The standard layout has been flipped, with the kitchen taking its new place at the front of the house – an often underused, forgotten space. Here, the original features of the house are retained, emphasised by dark colours and material tones. 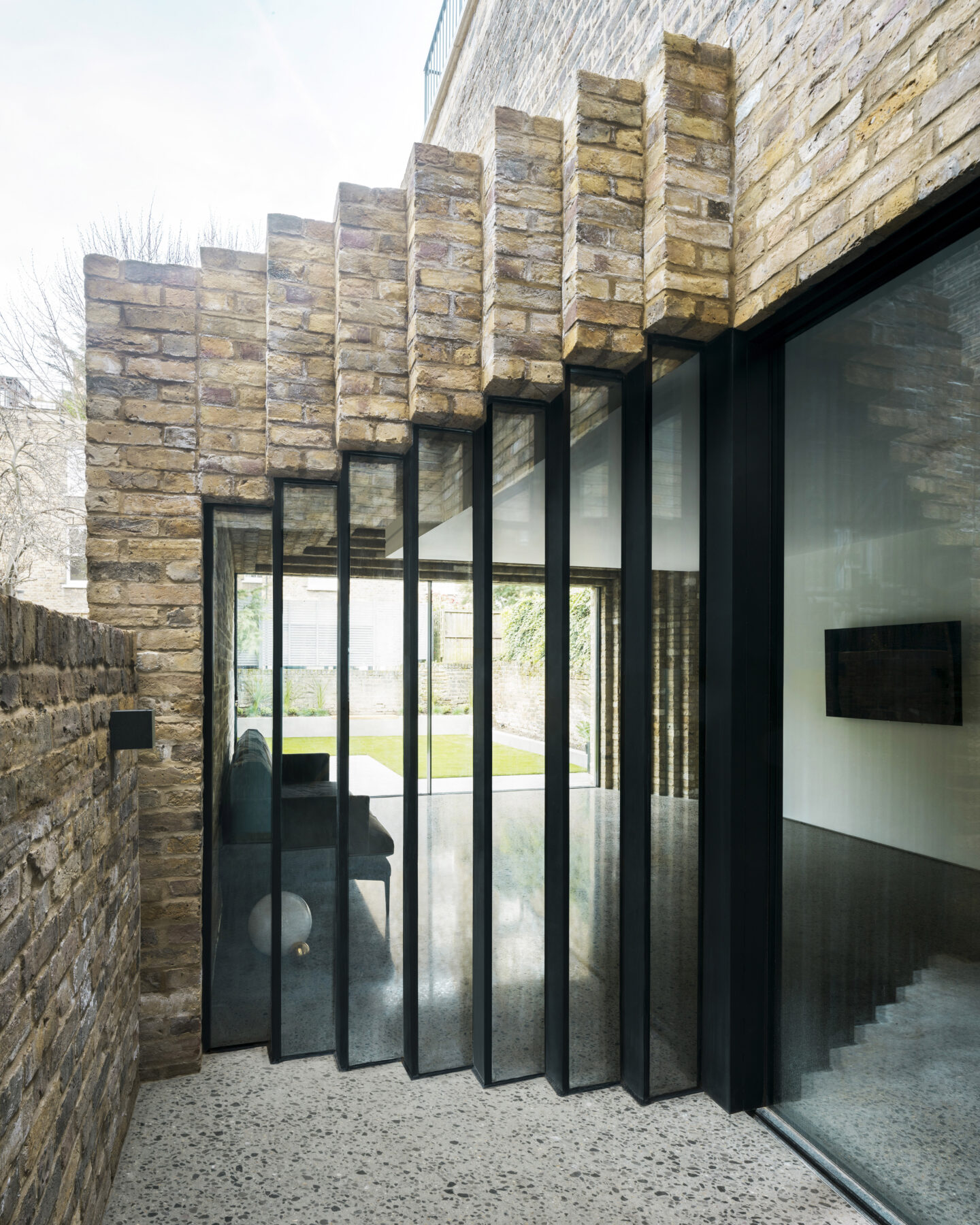 Moving onward, the spaces unfold in a sequence from dark to light – intensifying the bright, voluminous feel of the addition. 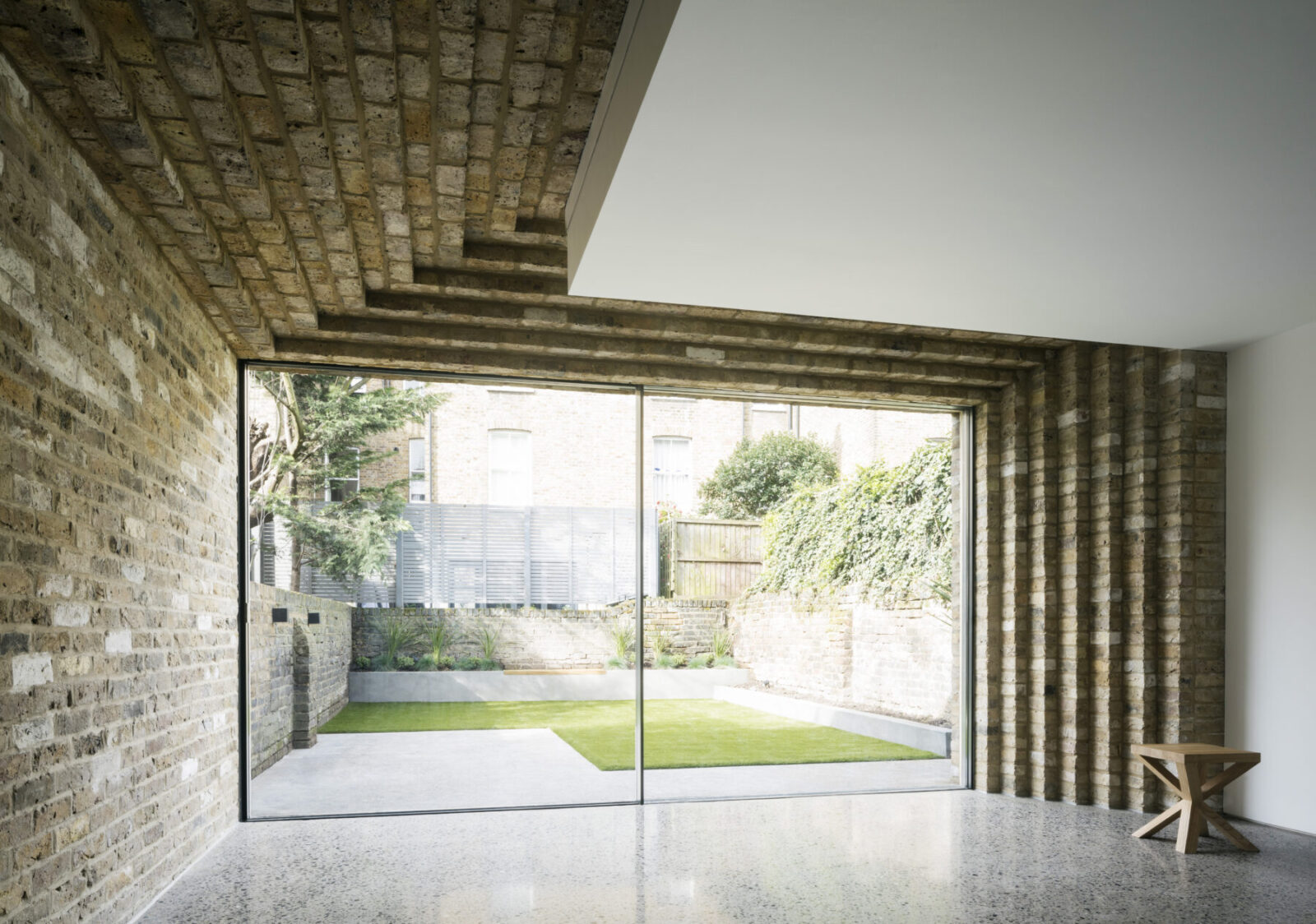 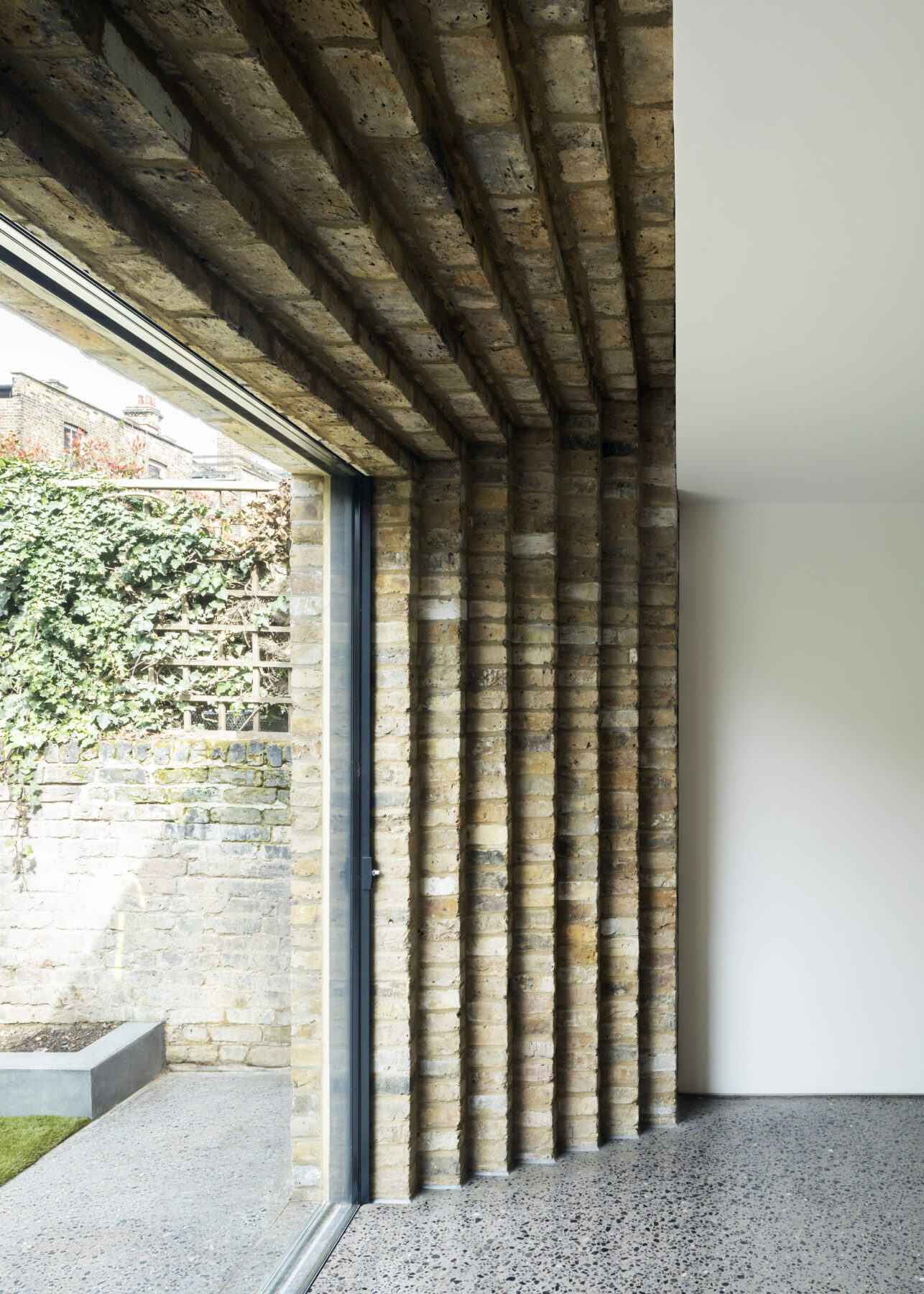 In the centre, the dining room is marked by a change in floor treatment: narrow timber planks with aligned seams transition between the smooth concrete of the kitchen and the roughly- grained concrete of the extension. A light-well ensures the full depth of the plan is bright, and provides a moment of pause within the interior. Here, where faceted glass meets stepped brick, the geometry of the concept is accentuated. 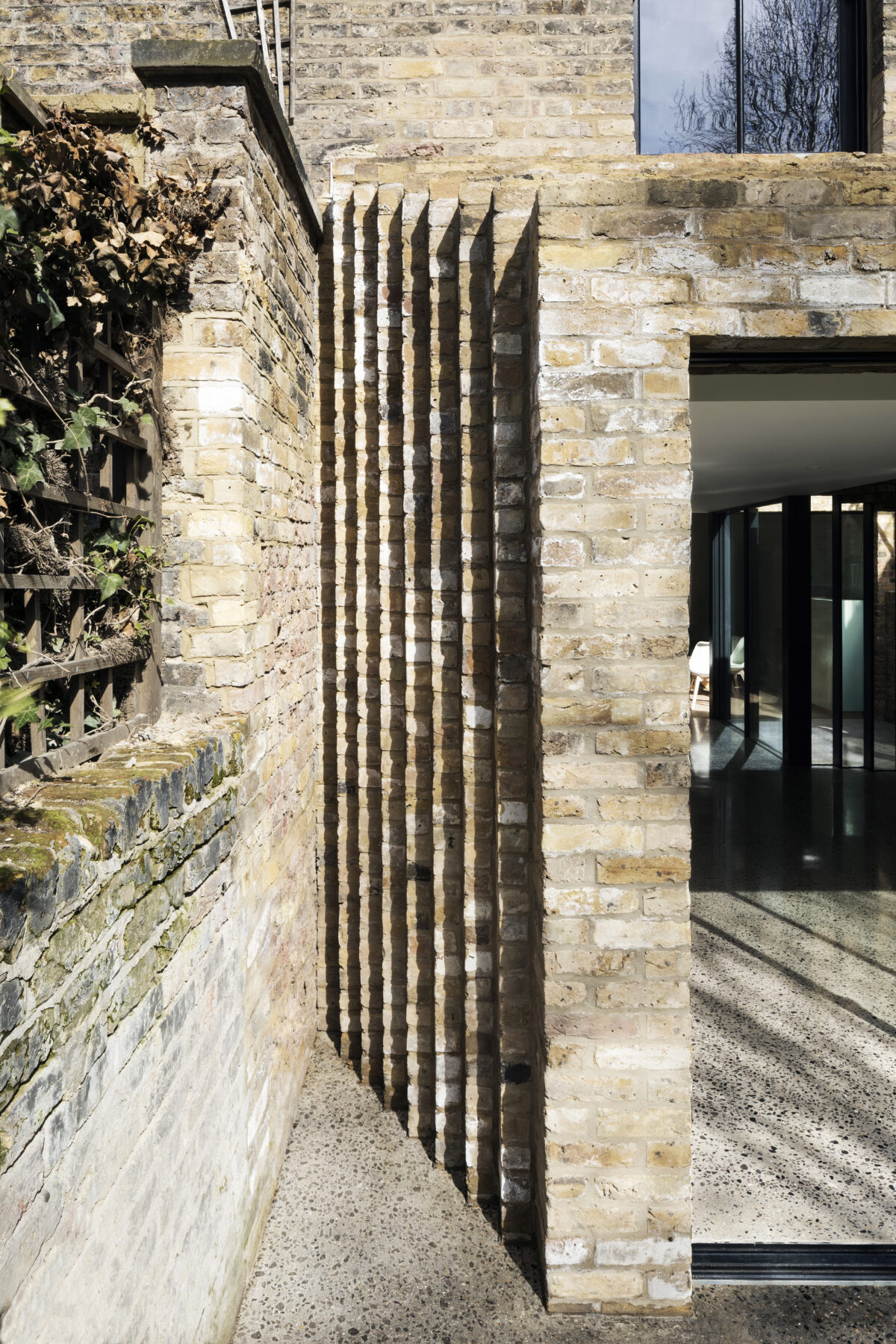 ‘We worked closely with the structural engineers to create an entirely column-free space’, explains co-founder Billy Mavropoulos, ‘The structure was achieved using laser-cut, double- direction, stepped beams that give the sensation that the brick addition is floating. This concept was integrated into the design in conjunction with the engineers from the start – working hand-in-hand to create the appearance of a first floor that is sunken into the extension.’ 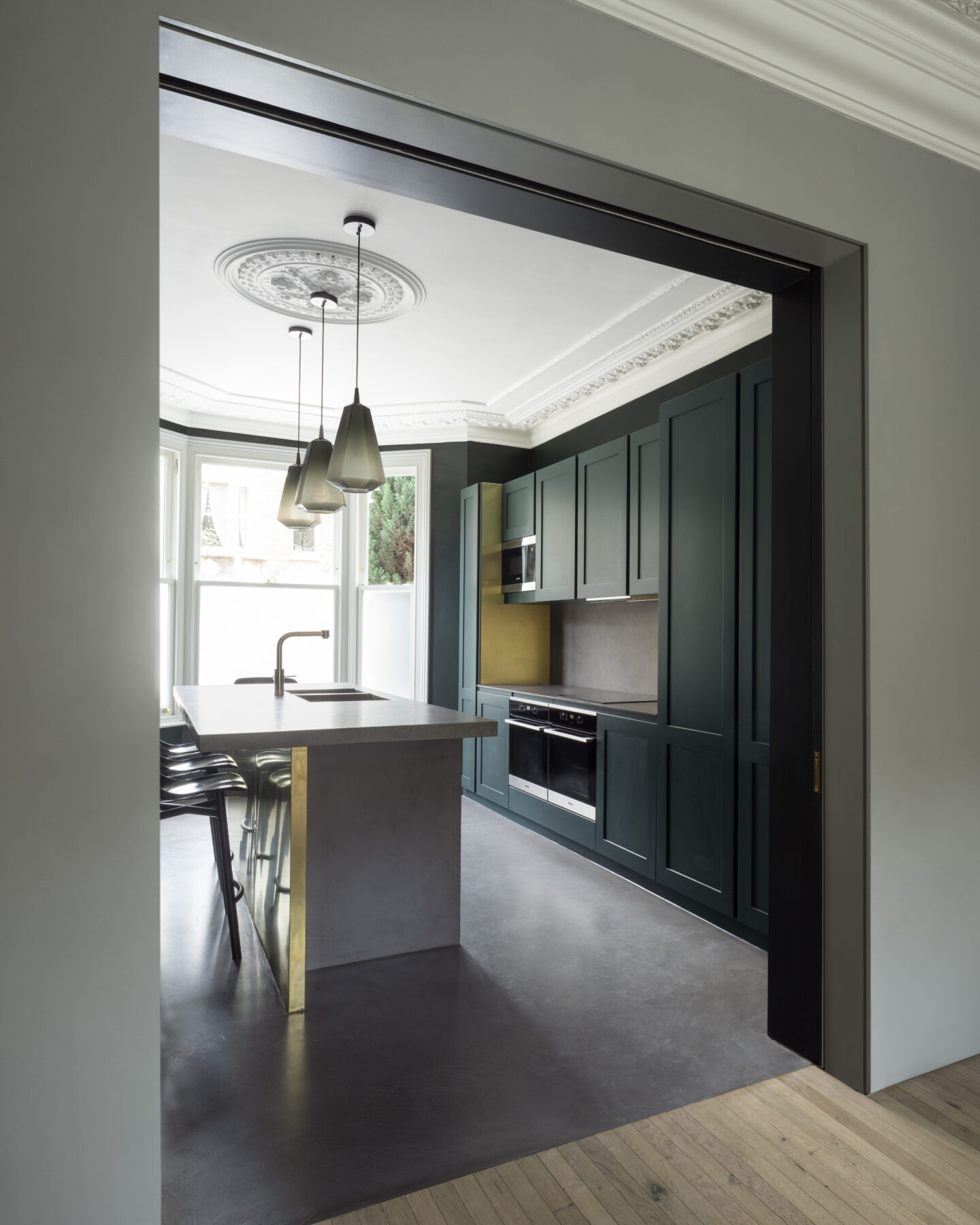 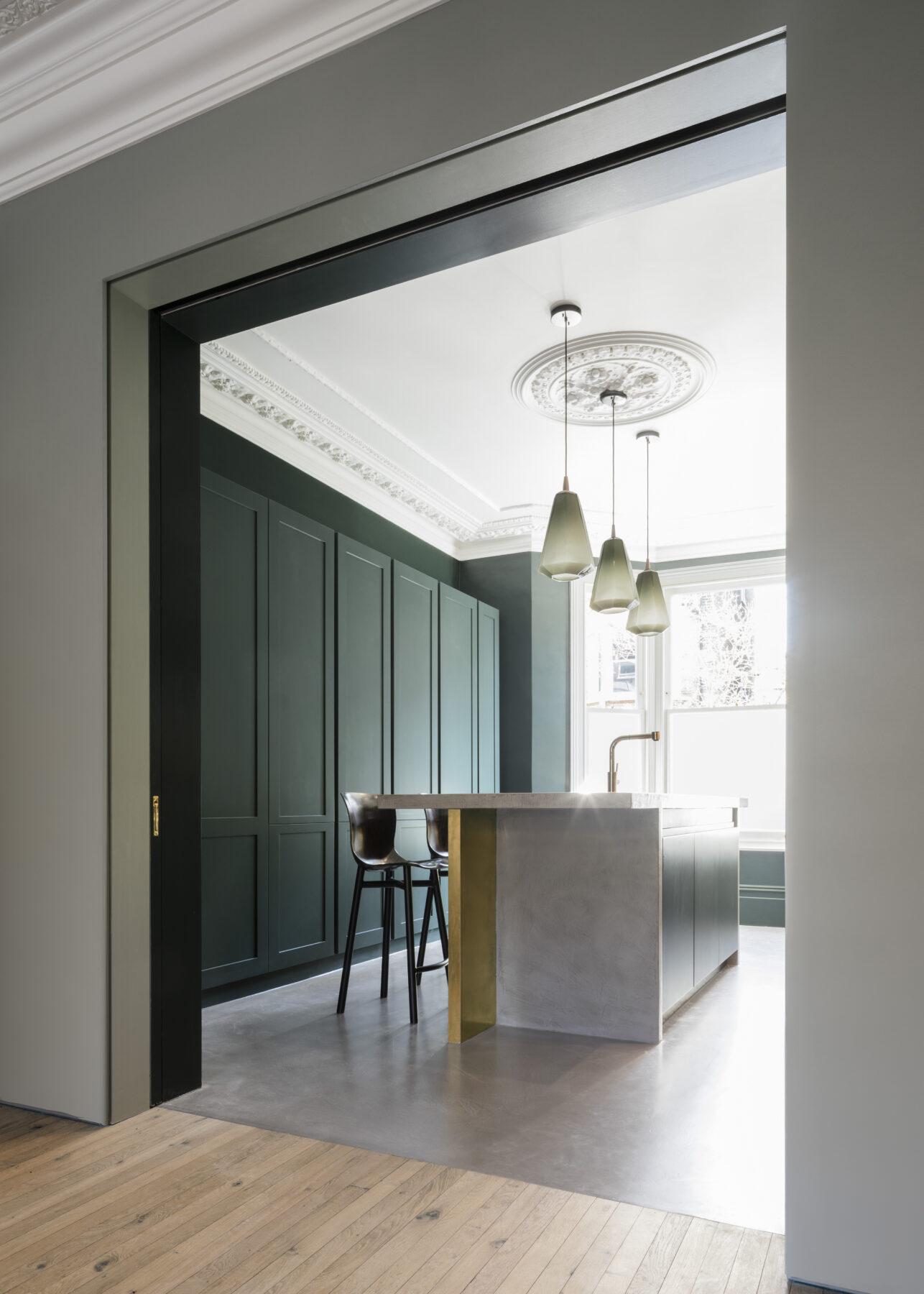 For Bureau de Change, the notion of using a common-place material, such a brick, in an unexpected way is a motif that can be seen across much of their work. In the case of the Step House, the brick, left exposed inside and out, is celebrated in a way that respects the existing house while clearly departing from the traditional language of the historic architecture. 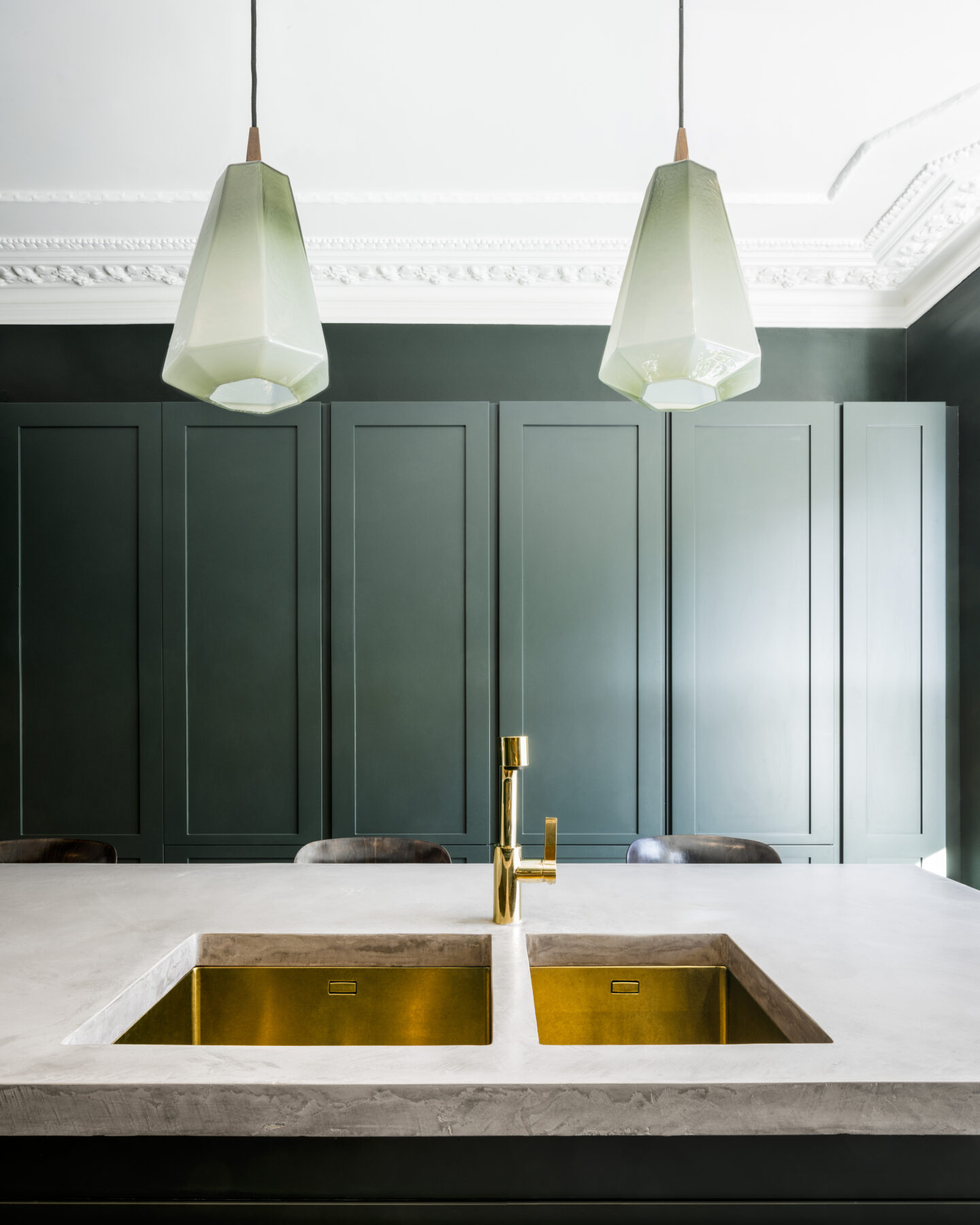 Bureau de Change is an award winning architecture practice founded by architects Katerina Dionysopoulou and Billy Mavropoulos. Its work is a direct product of the founders’ upbringing, passions and experiences – combining the pragmatism and formality of their architectural training with a desire to bring a sense of theatre, playfulness and innovation to the design of spaces, products and environments. The result is a studio where rigorous thinking and analysis are brought to life through prototyping, testing and making. 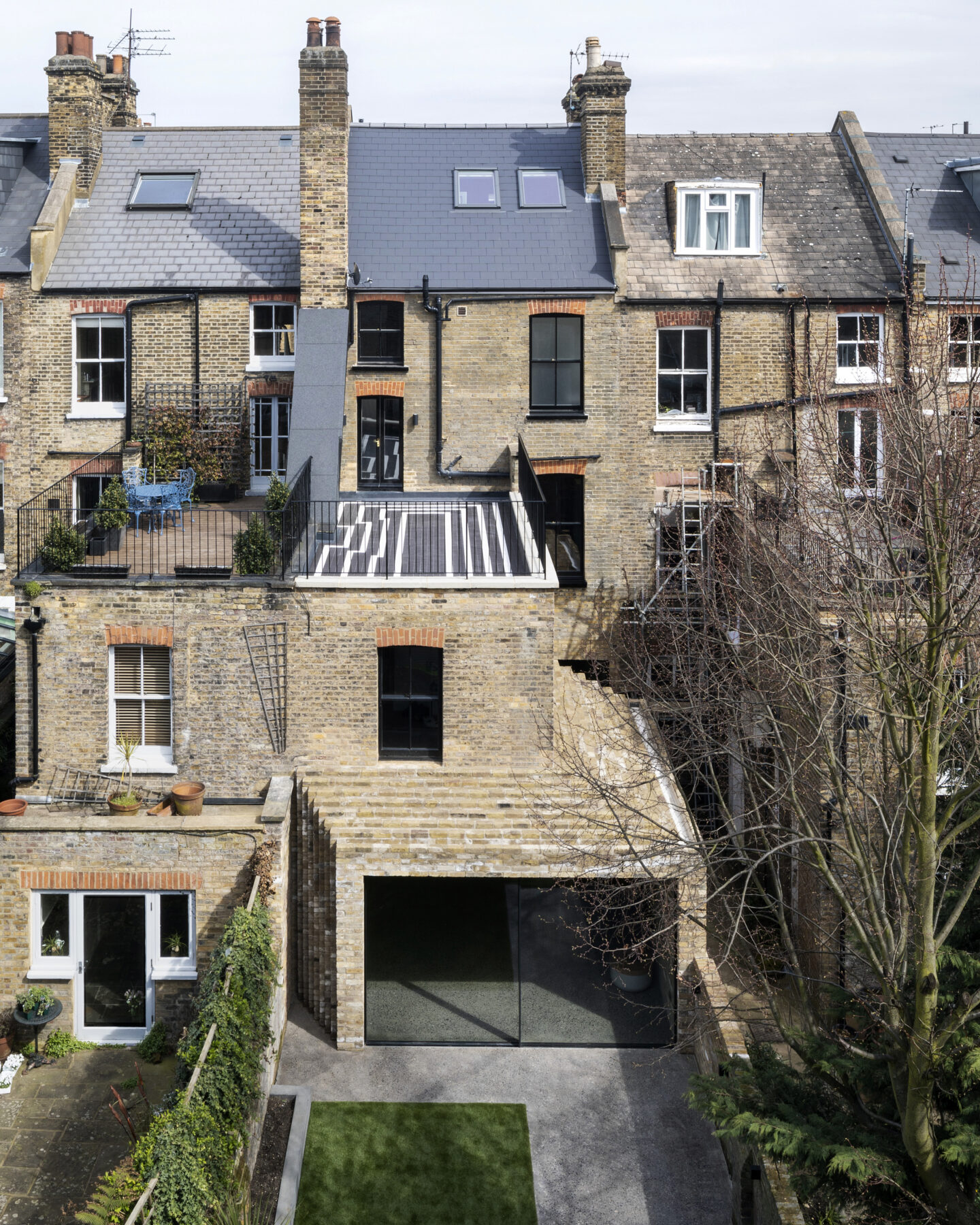 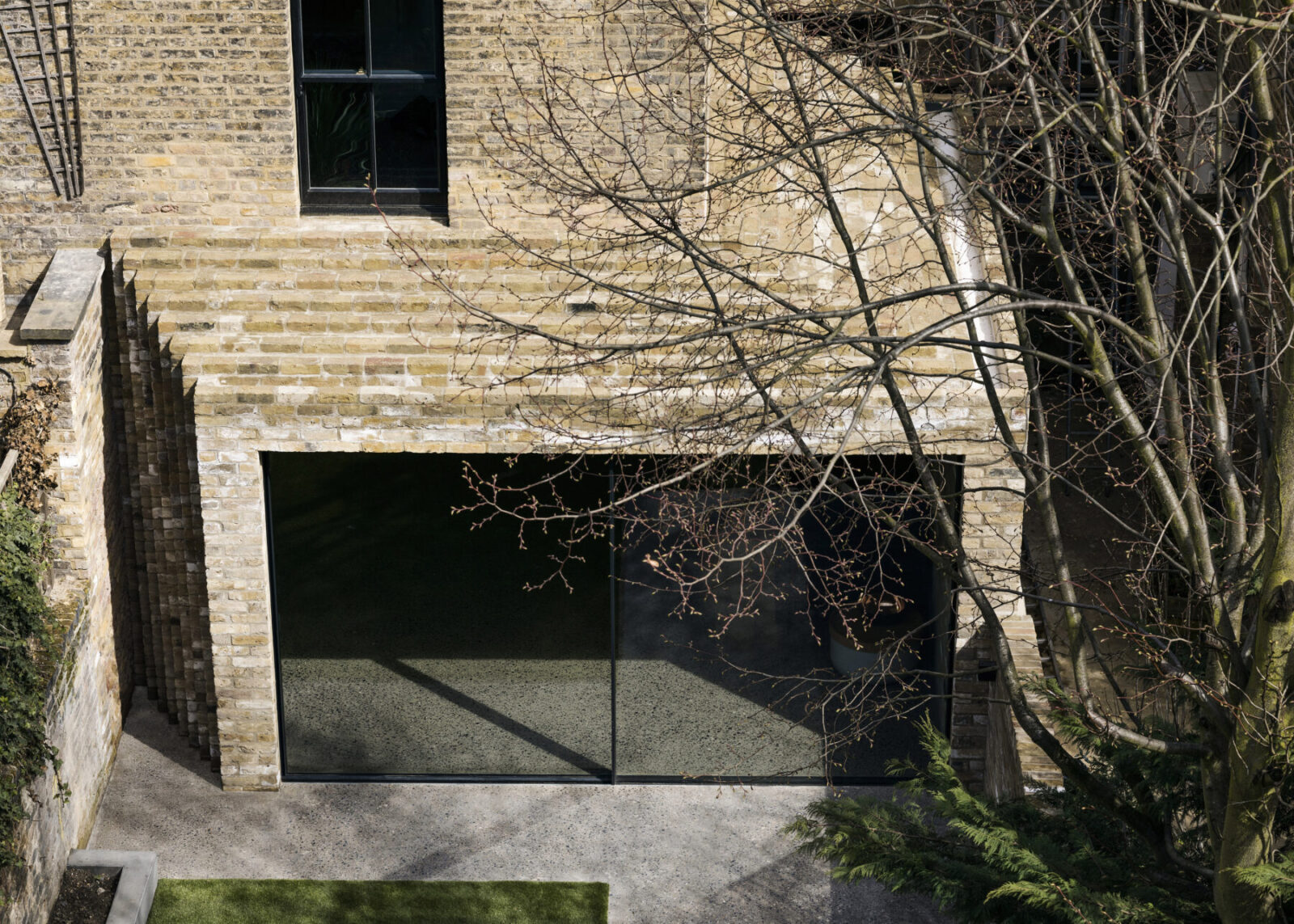 Studio Nonpareil designed "Fatto a Mano", a gelateria in the centre of Thessaloniki, Greece.

by VALIA KAVALLAArchisearchhttps://www.archisearch.gr/wp-content/uploads/fatto_a_mano_gelateria-3-370x700.jpg
INTERIORS 19MAY 2022

at ONASSIS STEGIArchisearchhttps://www.archisearch.gr/wp-content/uploads/all-02-370x700.jpg
SHARE THIS PAGE
WITH YOUR FRIENDS