Architecture students Georgios Thalassinos & Ioanna Karampetsou participated at the ‘Kaira Looro Architecture Competition 2022, Children’s House’ proposing a single form building with a central elliptical atrium acting as meeting point for the children to gather and play thus promoting, at the same time, a sense of communal togetherness and protectiveness.

The right to health is considered the most important children’s right, necessary for the development of every child. Malnutrition, however, deprives many children of the right to get psychological and physical growth necessary to develop all of the fundamental abilities to participate in social life. The need to create a center that respects the rights of children, prompted the design of a space whose organization will create a sense of security, will provide the necessary nutrition to those in need, will allow in its entirety the possibility to play, between the volumes of functions and the yard while, at the same time, it will be adapted to children’s scale. 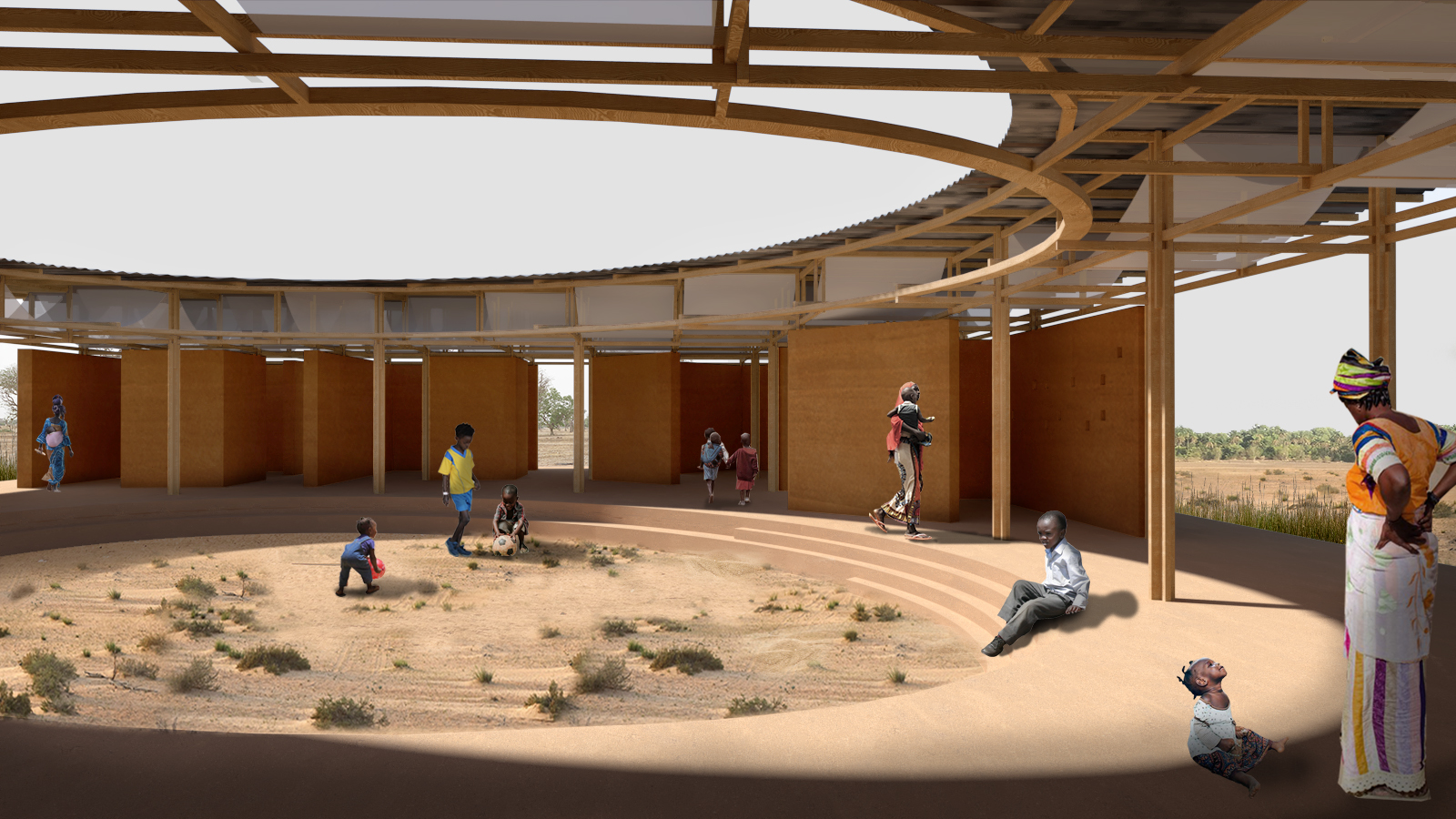 The functional needs of the proposal led to the division into two main parts. The one of healthcare, concerning the physical health of children and the other of recreation, concerning the spiritual one. Considering these two inseparable, it was necessary to find a hybrid element of separation and union at the same time, an element in which they connect and communicate. An elliptical courtyard submerges facing the east-west axis, around which the spaces of the activities are structured. 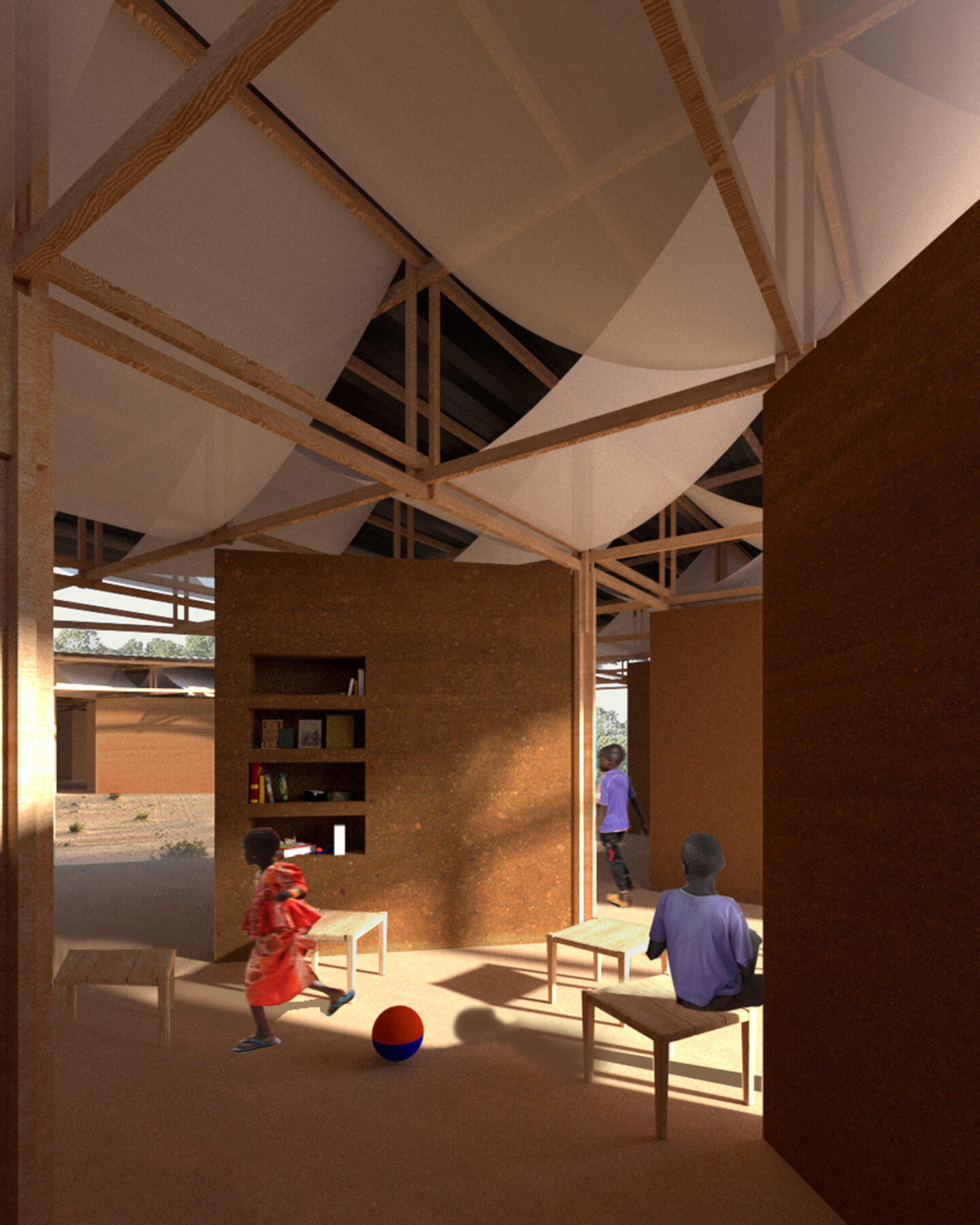 As a meeting point, a space for playing, the ellipse generates a designed system of communal togetherness promoting a circular – fluid motion. 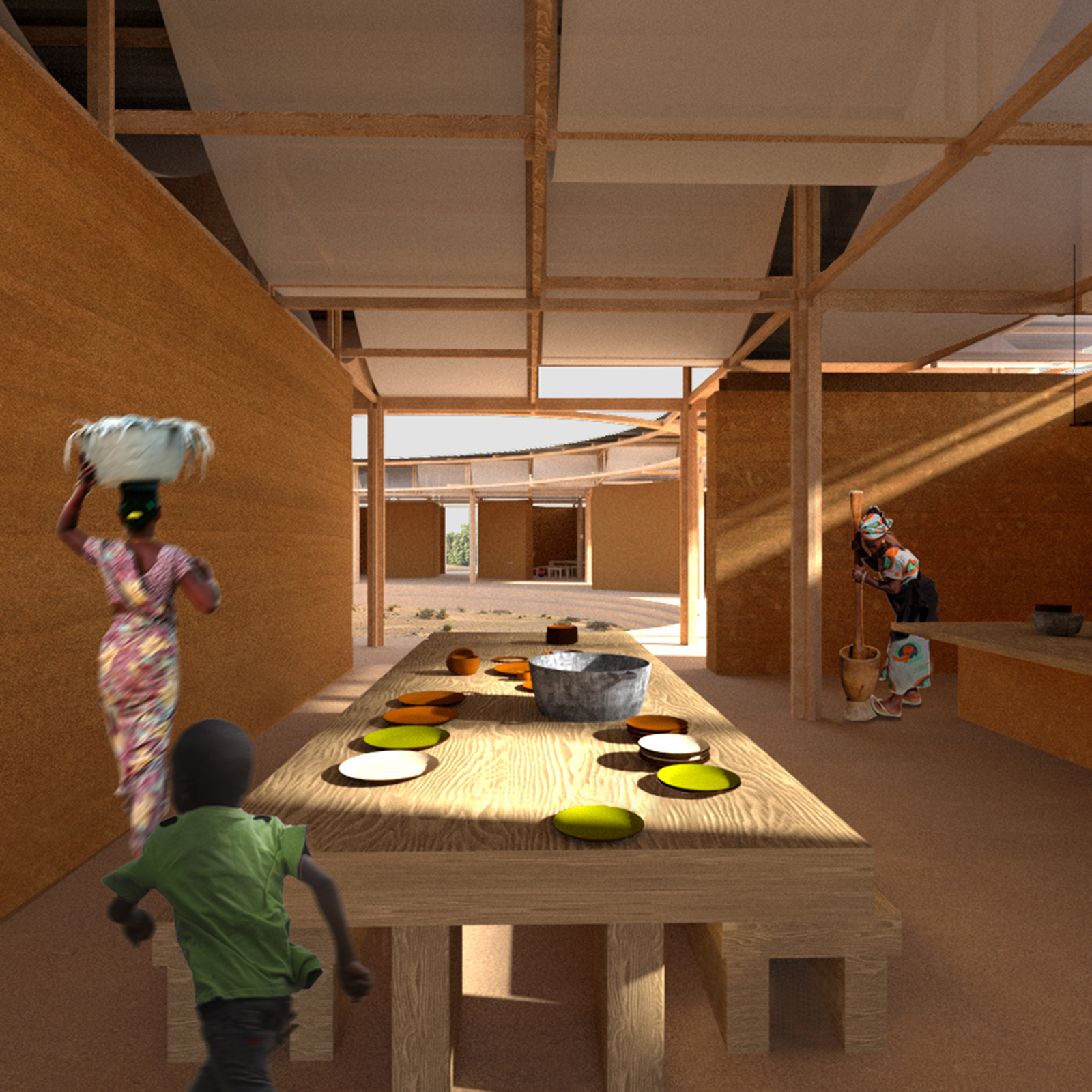 The dual character of the functions is followed by the dual directional grid – vertical and diagonal – which ensures the best relation of volumes around the ellipse but is also used as a construction guide. 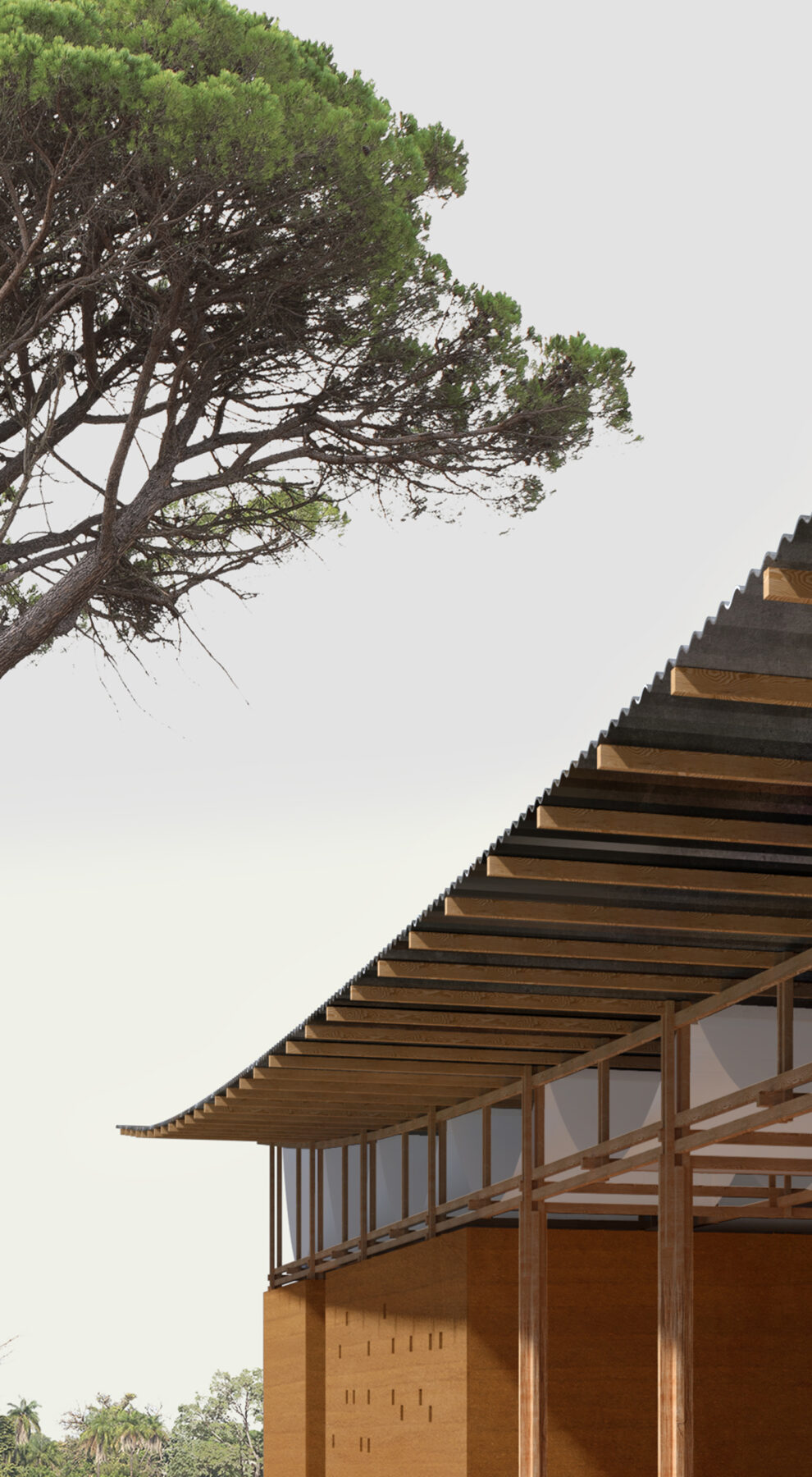 Specifically in the healthcare area there are, the examination room, two sleeping spaces that can accommodate four patients each, separated so that mothers can sleep with their children when needed. In this part toilets are also found along with changing rooms, a laundry area, storage space and a kitchen with a social character prompting the active participation of the community in improving the children’s health. Although all  functions have been structured in order to circulate the yard, the two sleeping areas of hospitality are rotated, creating their own smaller center, ensuring the necessary quiet for the recovery of patients. In the recreation area, the spaces that are developed follow a free logic, allowing the permeability of the movement. These spaces will host creative activities that will engage the children, always allowing the possibility of play. At the same time, the area of administration is directly related to the areas of recreation, with the aim of facilitating the work of volunteers and staff. 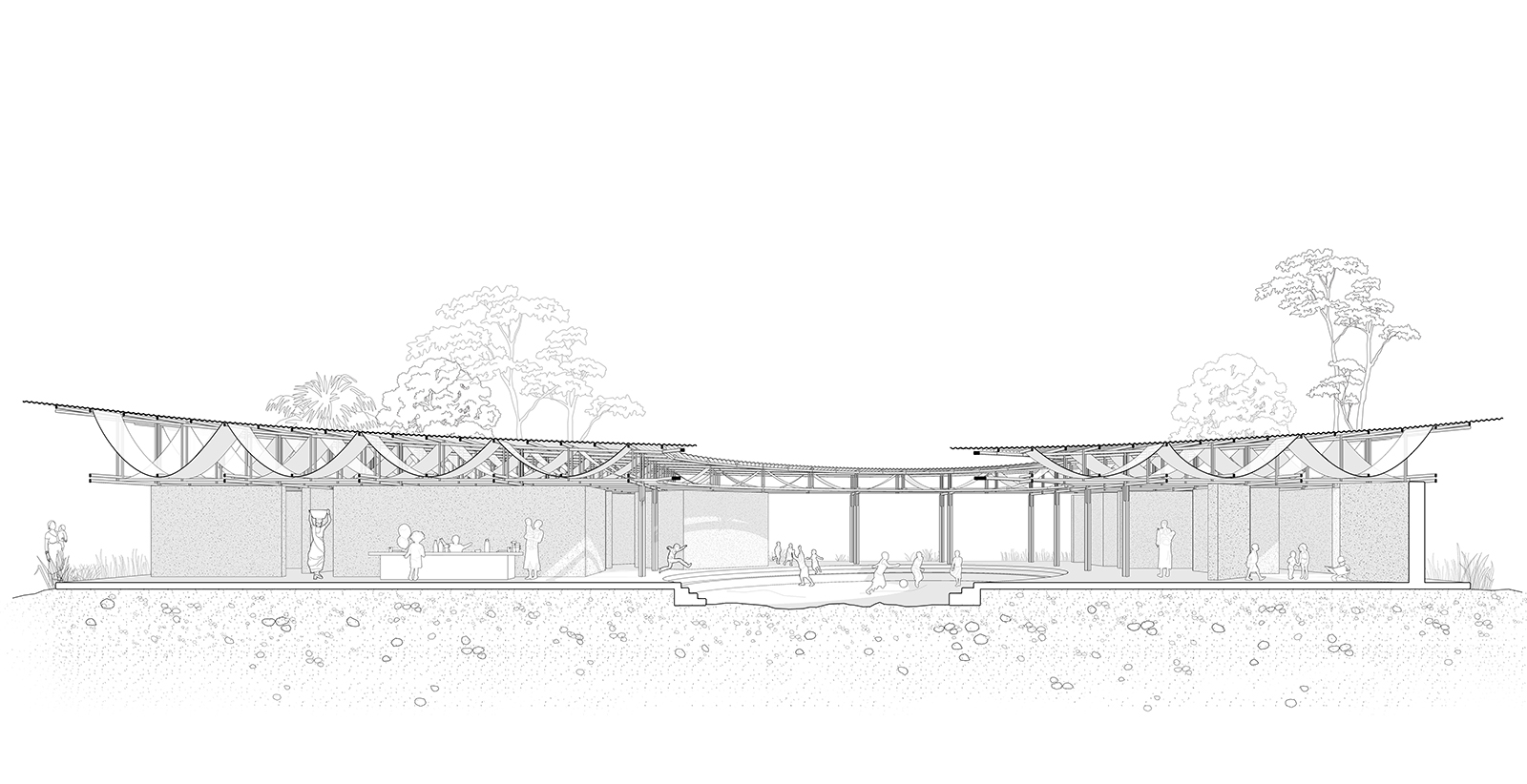 In order for this small children’s village to acquire a single form, it is covered by a roof that leaves free the diffusion of light in the courtyard through the central atrium. The fluidity of the enclosed and semi-outdoor spaces that this roofing creates is also expressed in the form of the facade, where it curves, giving a hint of the existence of the atrium inside, while in order to look lighter, it is composed of a wooden structure and distances itself from the enclosed volumes that seem to emerge from the earth. 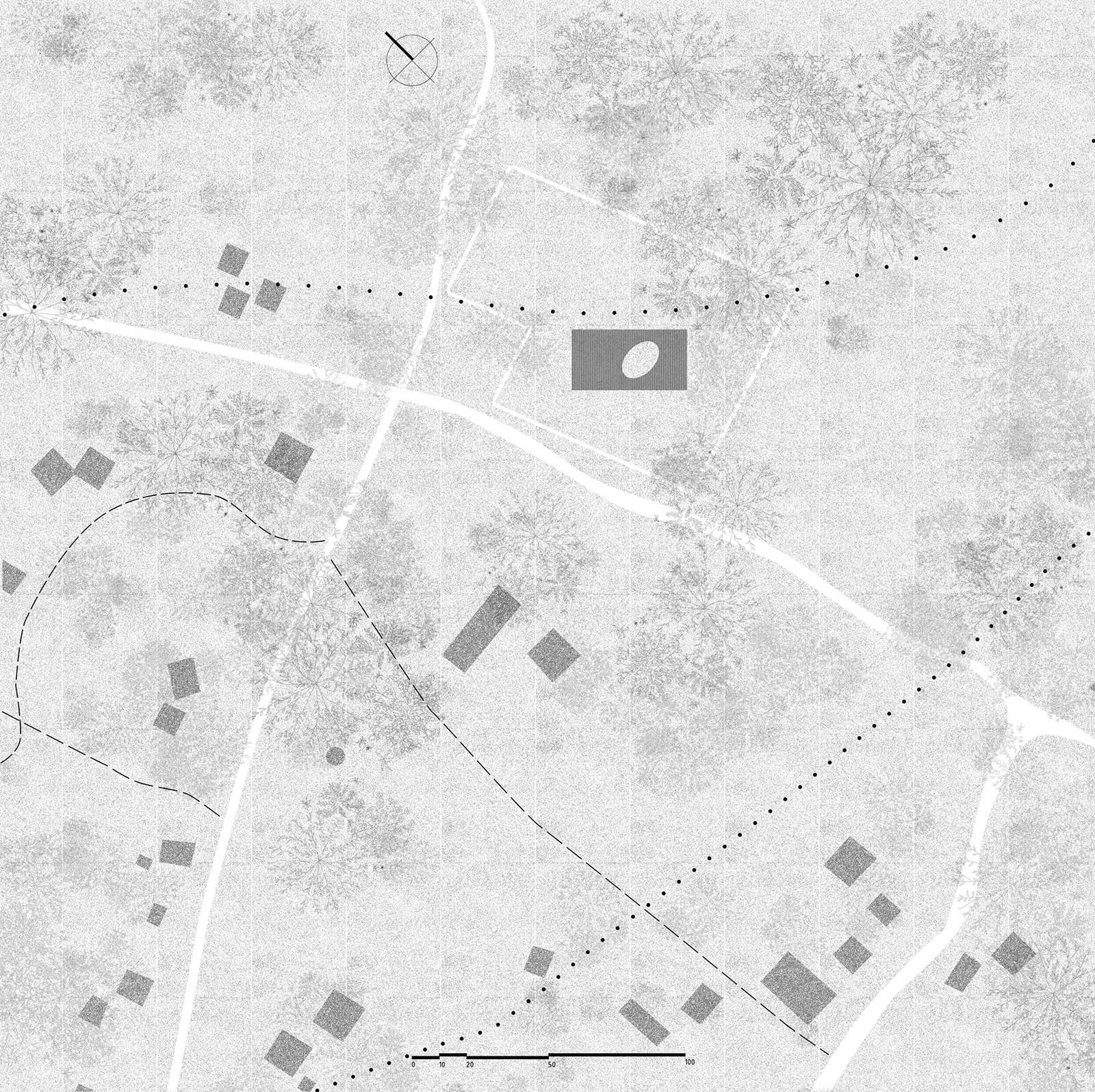 The project emphasizes the use of local materials and construction techniques as well as sustainability. 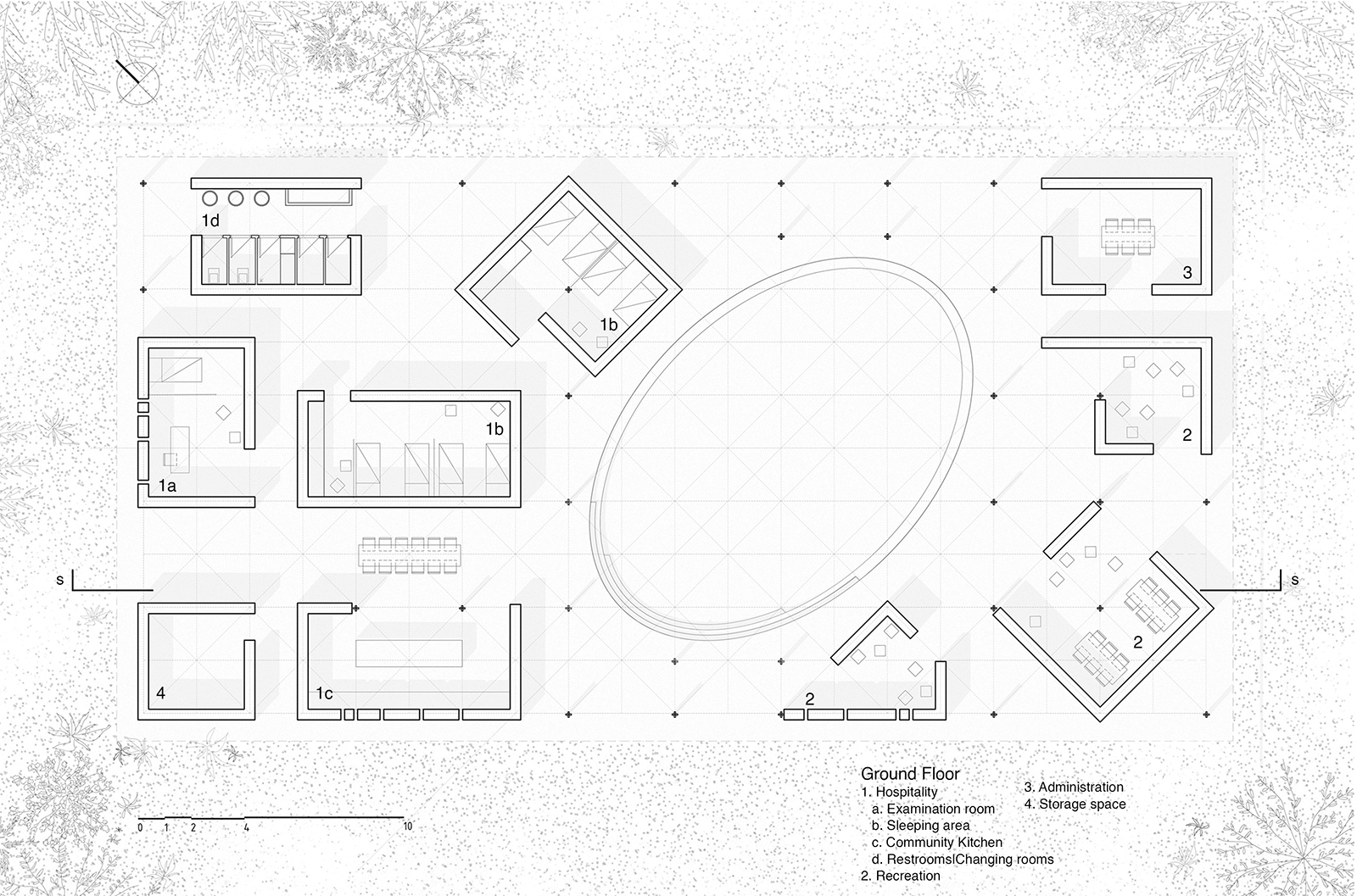 The way matter ultimately shapes the overall composition is very important. A platform consisting of laterite sand and clay is the basis of all. The land itself is used to create enclosed spaces, harmonizing the building with the natural environment, while emphasizing emotions such as those of security and stability. Small holes in the earth layers allow light to pass inside through the heavy character of the wall. The structure is completed by cruciform pillars made of local wood. Having a light character, their coexistence with the heavy earthen walls creates flows, movements, stops. The lightness of the local wood, however, is widely used in the design of the curving roof, while the local fabric applied to this slope takes advantage of the wind, ensuring adequate ventilation and creating ripple patterns. 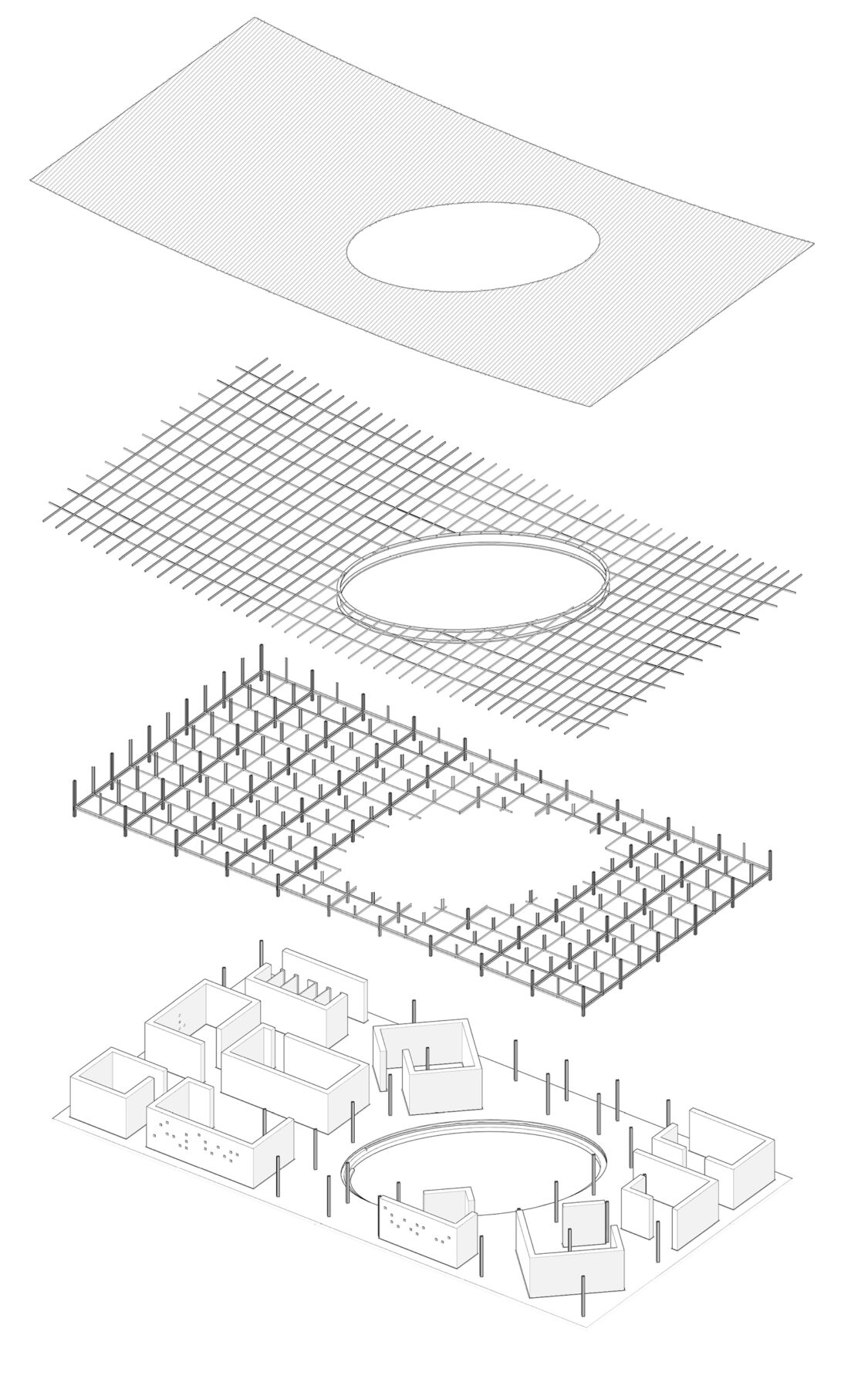 The aim was for the materiality to have a strong symbolic character throughout the elaboration of the project, but at the same time to be used as a synthetic and functional element while keeping the construction at a low cost level. 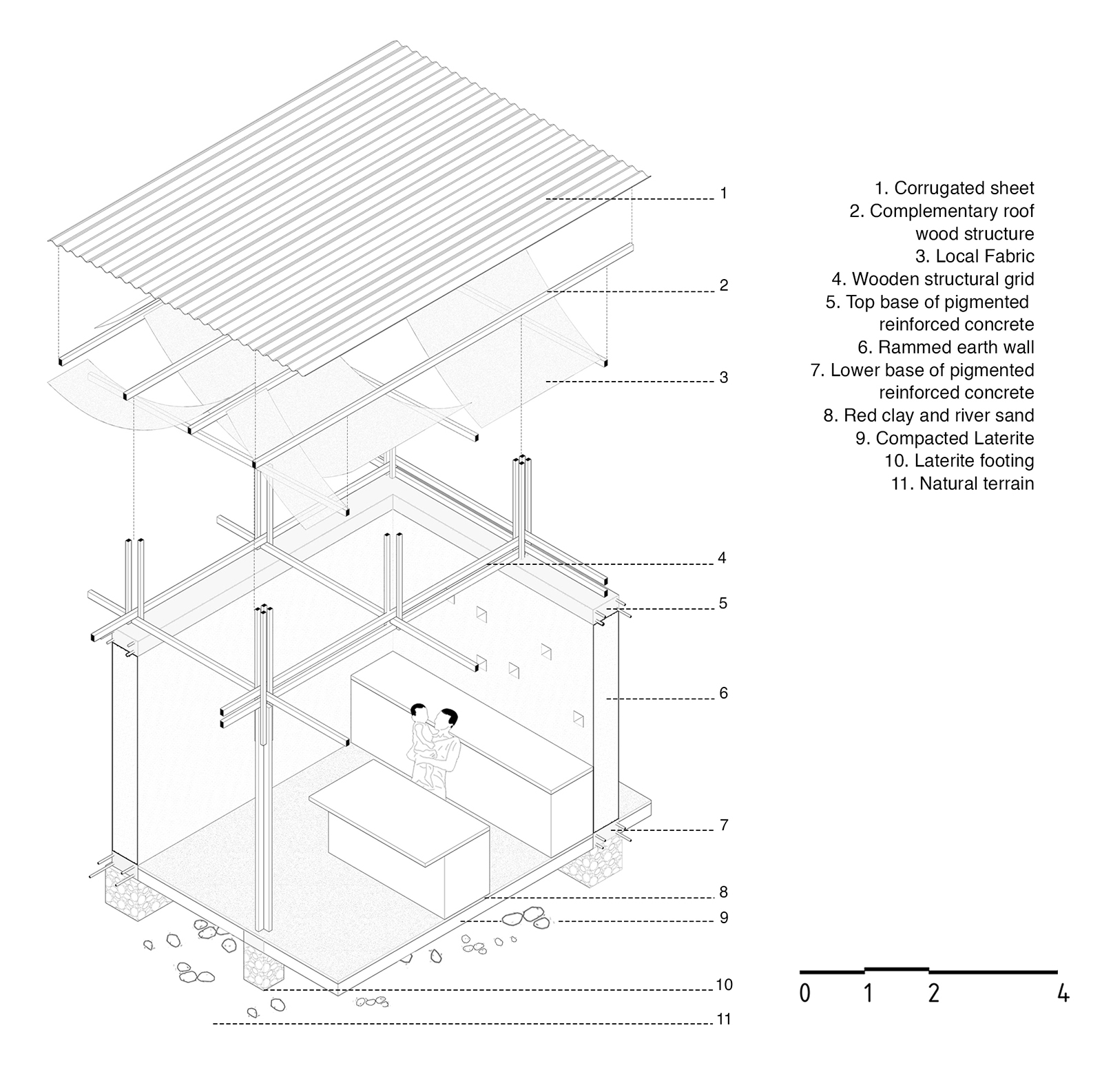 by ELPIDA ROIDOUArchisearchhttps://www.archisearch.gr/wp-content/uploads/xza-architects-eydap-competition-cover-370x700.jpg
SHARE THIS PAGE
WITH YOUR FRIENDS