A look at 10 of the architect’s most significant buildings.

Canadian-born architect Frank Gehry has spent more than half a century radically changing our ideas about what buildings can be. A number of his projects have become world-renowned attractions and multiple works have been cited as among the most important buildings of contemporary architecture.

Gehry doesn’t stick to a particular school of thought, having avoided labelling himself throughout his career. However the aesthetic of his buildings are often thought of as Deconstructivist – a movement in postmodern architecture which gives the impression of a fragmented building and is characterized by an absence of harmony, continuity and symmetry. Outside of this, Gehry’s buildings are whimsical, daring and bold, and have been praised and criticized equally.

Here we take a virtual tour of some of Gehry’s most important works to gain an insight into the creative vision of this groundbreaking architect.

It seems only fitting to start with Gehry’s own dwelling, which was completed in 1978. Gehry took the existing house he and his wife bought in Santa Monica and transformed it into a symbol of Deconstructivism.

He combined the new and the old, with the raw and the refined, building a new house around the original Dutch colonial structure underneath. Holes were made, walls were torn down and put up, and the relatively unimposing dwelling was suddenly a loud architectural foghorn among the quieter, yet still pretty large, mansions around it. Gehry’s neighbors hated the house and dismissed the architect’s skill in intertwining residential houses with bold architecture. 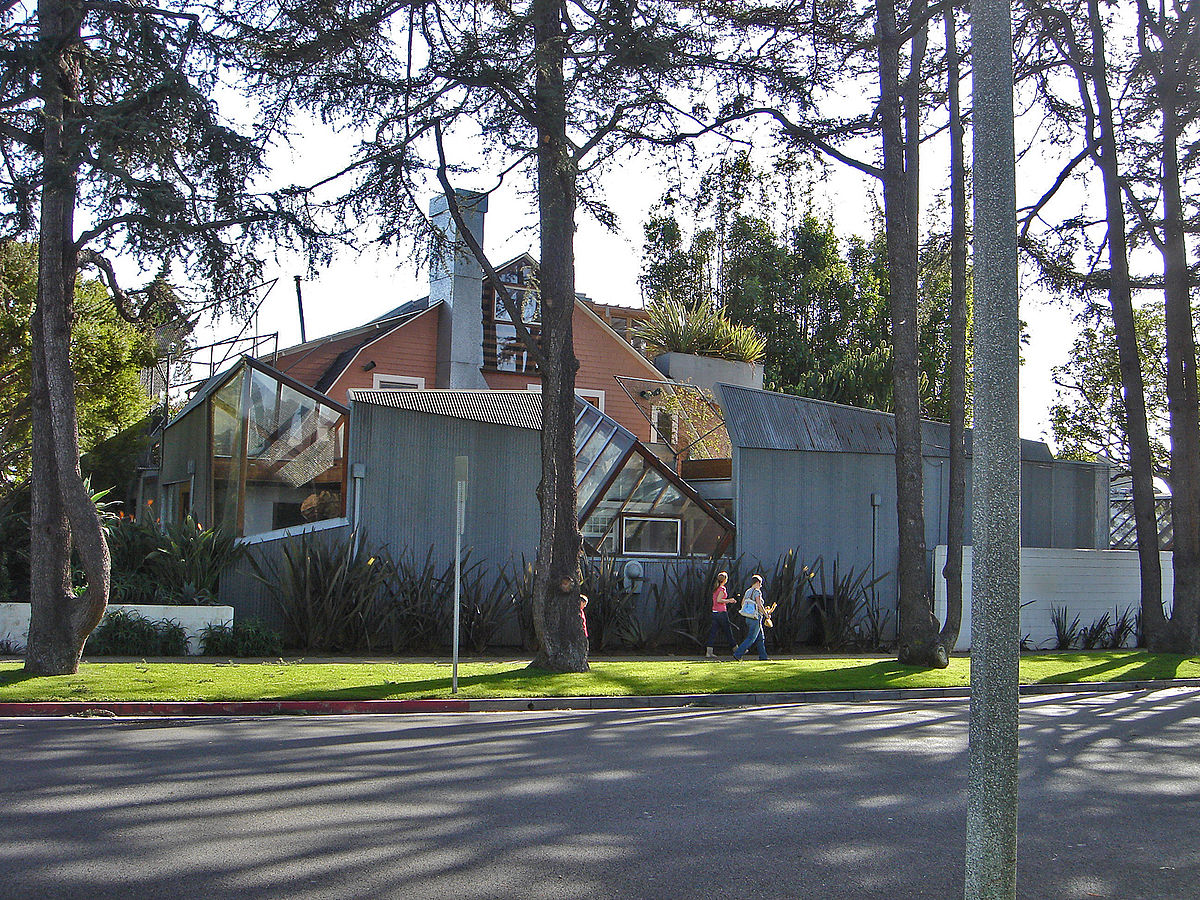 Gehry was an early adopter of computer-aided design and many of his buildings would’ve been impossible to engineer with analog methods. Even without it, Gehry’s design for the Vitra Design Museum was the last of the pre-technology buildings and demonstrates the architect’s innovative eye.

His first building in Europe, Gehry adopted a sculptural approach to the building, which includes exhibition space, a production hall and a gatehouse for the close-by Vitra factory. For the project, the architect limited himself to white plaster and a titanium-zinc alloy, which goes towards creating clean-cut curved forms and angular shapes.

Bilbao’s Guggenheim Museum is Gehry’s most recognizable building and is the project that shot the architect to international acclaim. It took 7 years to build and the curves on the exterior of the building were intended to appear random but were carefully modelled on modern software so the titanium caught the light.

The Solomon R. Guggenheim Foundation selected Gehry to design something “daring and innovative”, but it seems boldness costs. It’s one of the few buildings of this scale that actually went up in budget during the build, which was partly made possible because of the architect-centric model of project management Gehry demanded. 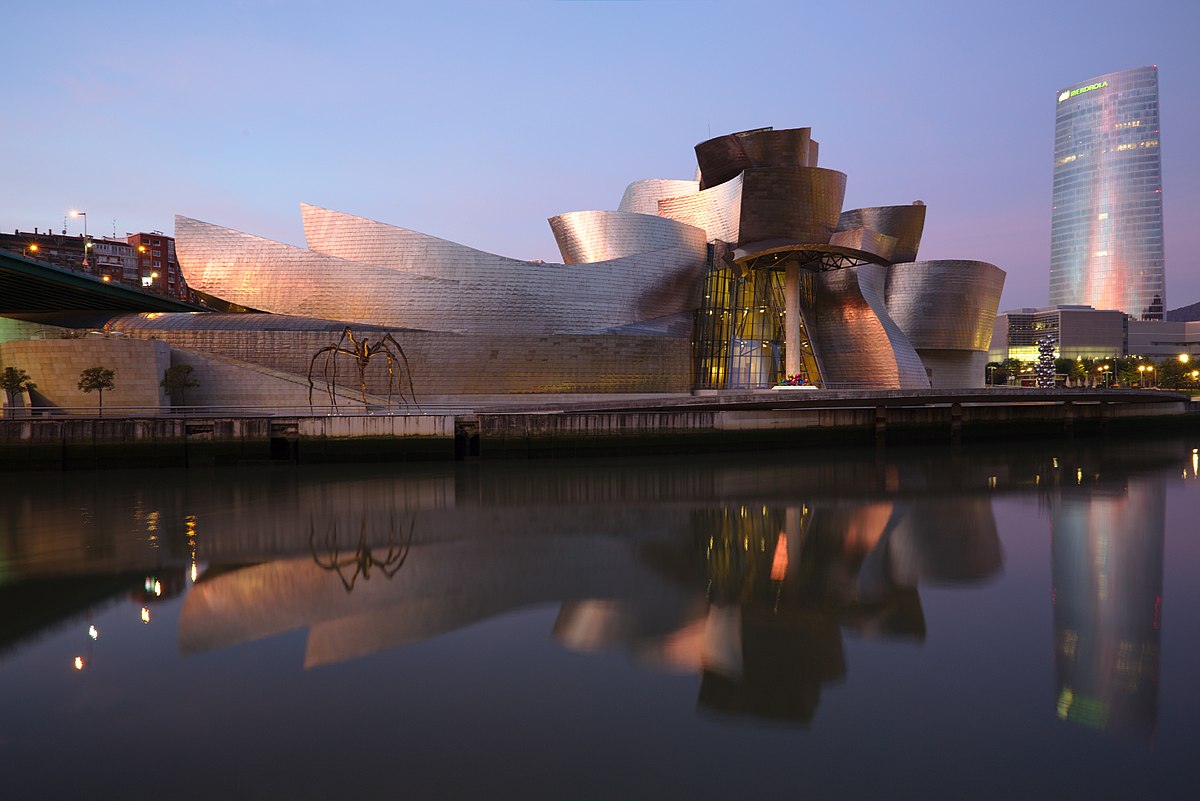 The Walt Disney Concert Hall is the 4th hall of the Los Angeles Music Center, and due to shortage in funding at various points took around 12 years to fully complete. The hall’s layout is a hybrid mix of arena seating configuration and a classical shoebox design. While Gehry worked on the architecture of the building, Minoru Nagata was behind the design of the acoustics of the concert hall.

While the building was warmly received, it did encounter some initial problems. Gehry was forced to sand part of the roof which was made of highly-polished, mirror-like panels because motorists had complained of being dazzled and pedestrians were avoiding patches of extreme heat caused by the building’s reflected light.

The Rasin Building in Prague has previously been nicknamed “Fred and Ginger” or “The Dancing House” because of the way the structures seem to dance together. Gehry designed the building in cooperation with Croatian-Czech architect Vlado Milunić and it took 4 years to complete.

The non-traditional design clashes with the Baroque, Gothic and Art Nouveau buildings Prague is traditionally known for. The building is composed of two structures which are thought of as both static and dynamic. Milunić and Gehry were keen for them to symbolize the transition of Czechoslovakia from a communist regime to a parliamentary democracy. The first part is a narrow glass tower supported by curved concrete pillars and the second runs parallel to the river and has undulating moldings with unaligned windows. 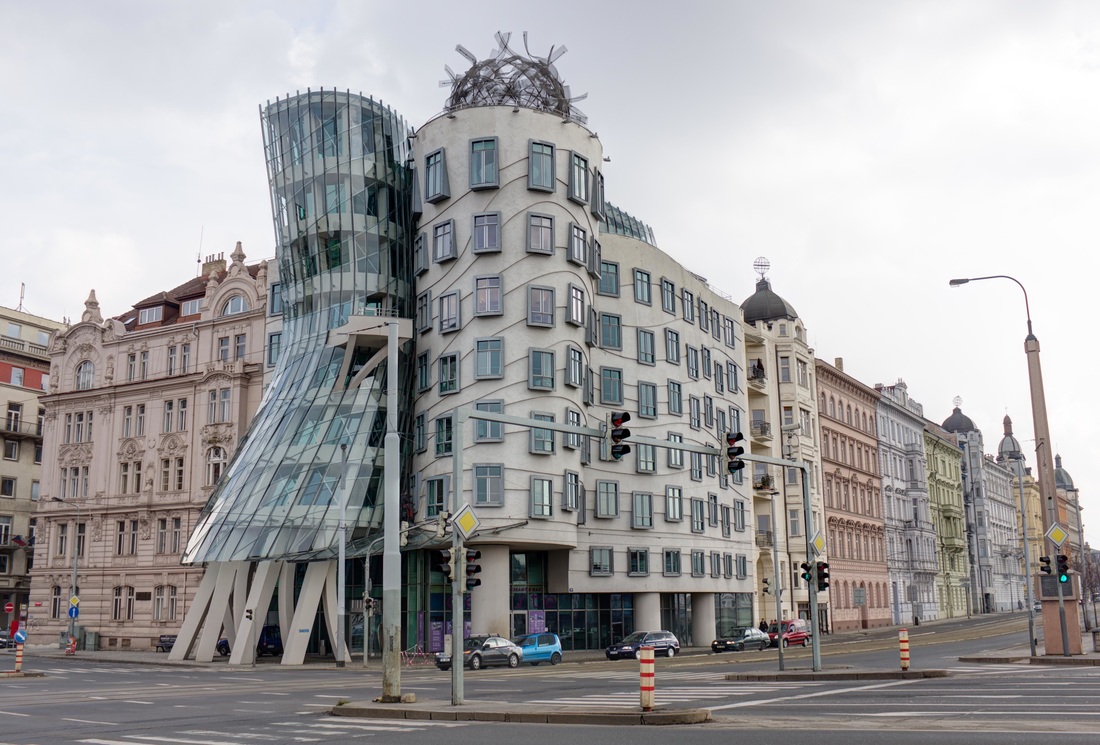 Built between 1991 and 2001, the now-called Binoculars Building was originally built for advertising agency Chiat/Day (now TBWA\Chiat\Day) as its West Coast headquarters. The building incorporates the giant binoculars sculpture into the facade, which was created by artists Claes Oldenburg and Coosje van Bruggen.

The sculpture marks the entrance to the car park and pedestrian entrance. The surrounding structures form office space and resemble a ship’s prow. Numerous tenants have occupied the building since it was completed, and currently 500 employees of Google reside in the Binoculars Building. 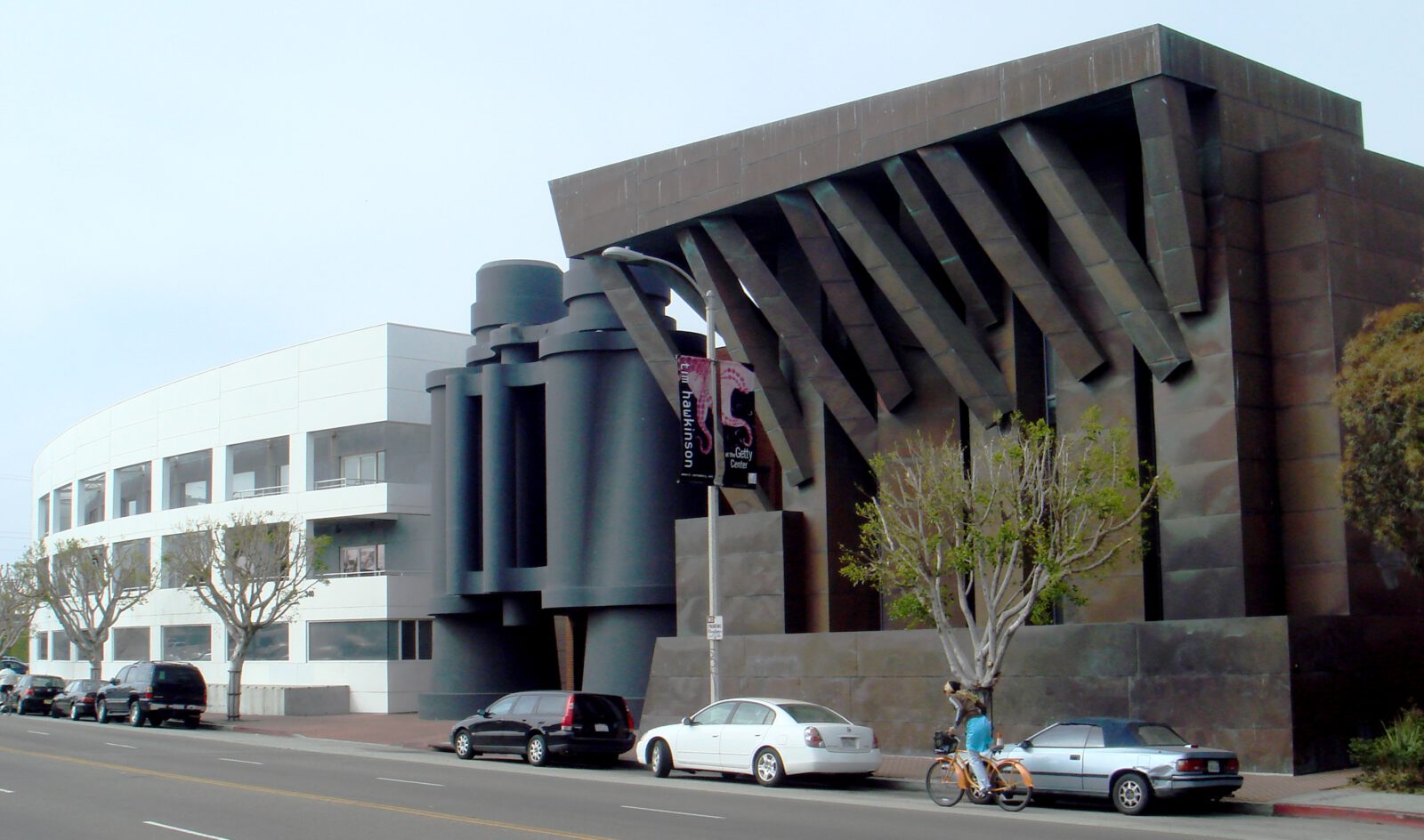 Maggie’s Centres are support facilities for cancer patients and are located on the grounds of National Health Service hospitals across the UK. This centre based in Dundee, Scotland was created by Gehry in 2003 and was the first new-build Maggie’s Centre.

The white, cottage-like building with a wavy silver roof is modelled on a traditional Scottish “but ‘n’ ben” dwelling – traditionally a simple, two-roomed cottage. Offering a welcoming sense of calm and sanctuary, the roof design was inspired by a woman’s shawl in a Johannes Vermeer painting. 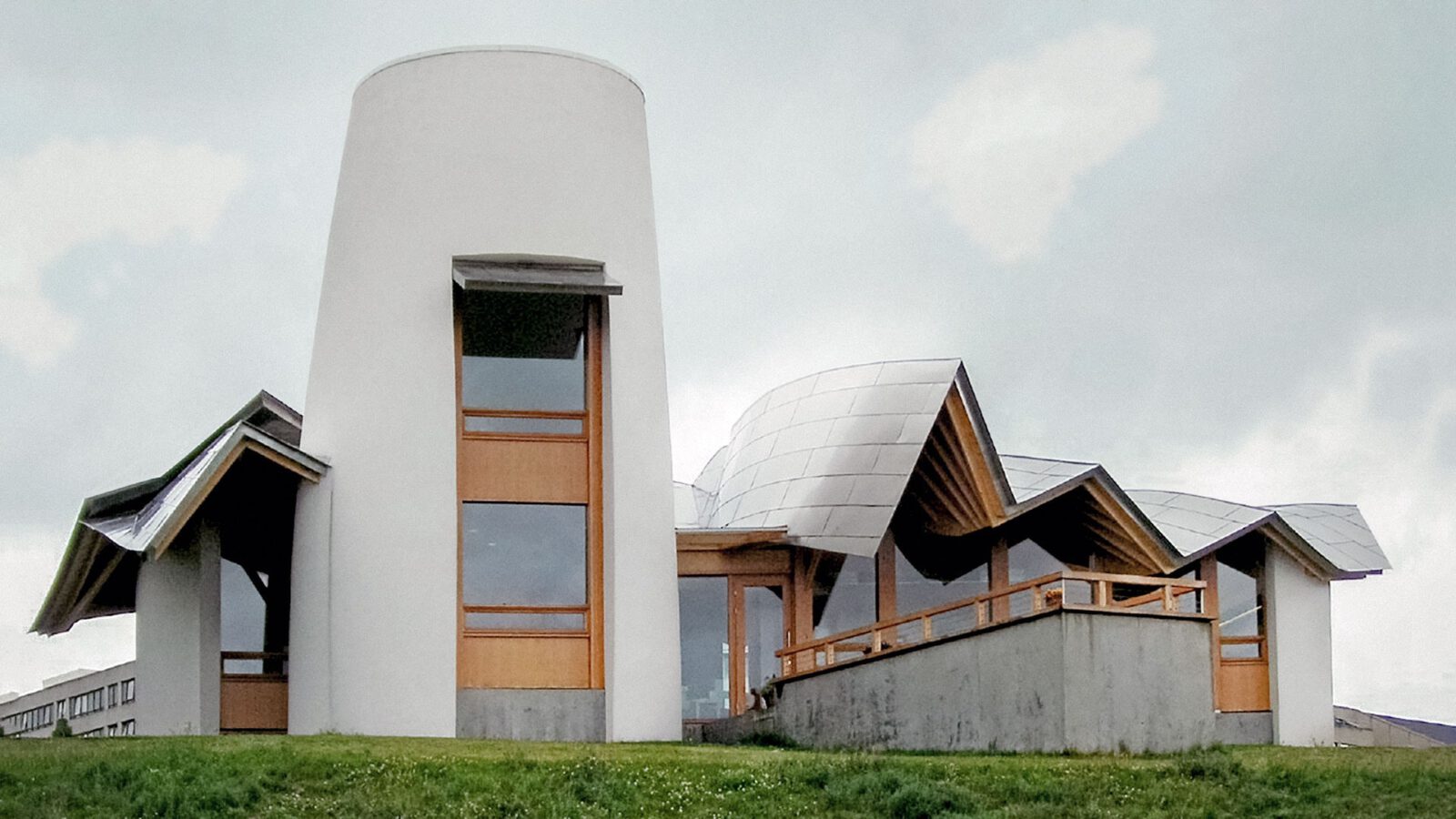 Seattle’s Museum of Pop Culture sits at the base of the Space Needle and was previously called the Experience Music Project. As such the museum’s design aptly pays tribute to 20th-century rock musicians and is inspired by sliced-up Stratocaster guitars.

A metallic whirlwind of sweeping aluminium and steel in iridescent colors, the building was met mainly with criticism, Forbes magazine for instance called it “one of the world’s 10 ugliest buildings”. 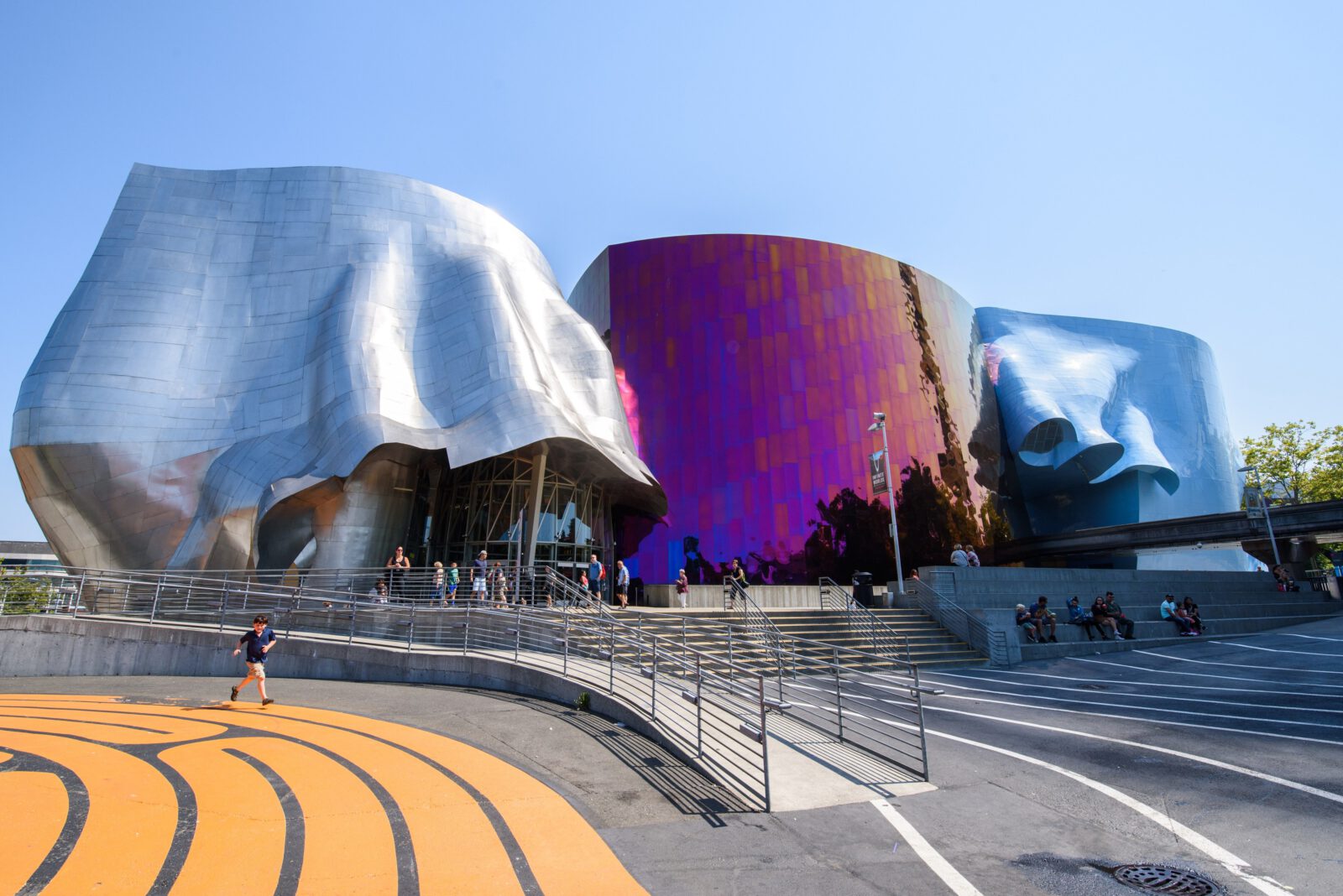 This was Gehry’s first building in Canada, but the architect was familiar with the gallery having visited it many times in his childhood. The original building dates back to 1918 and had already undergone expansion 3 times before Gehry was commissioned for the renovation. In response, the architect was tasked with uniting the cluster of buildings that had previously been added and reorganize the gallery.

He achieved this by introducing additional exhibition space in the form of a new entrance and a new 4-story south wing, clad in glass and blue titanium and with a glass and wood facade spanning 180 meters. In total Gehry added an extra 47% of art space to the gallery and fused together the new and the old, much like a bigger iteration of the Gehry Residence he designed in 1978. 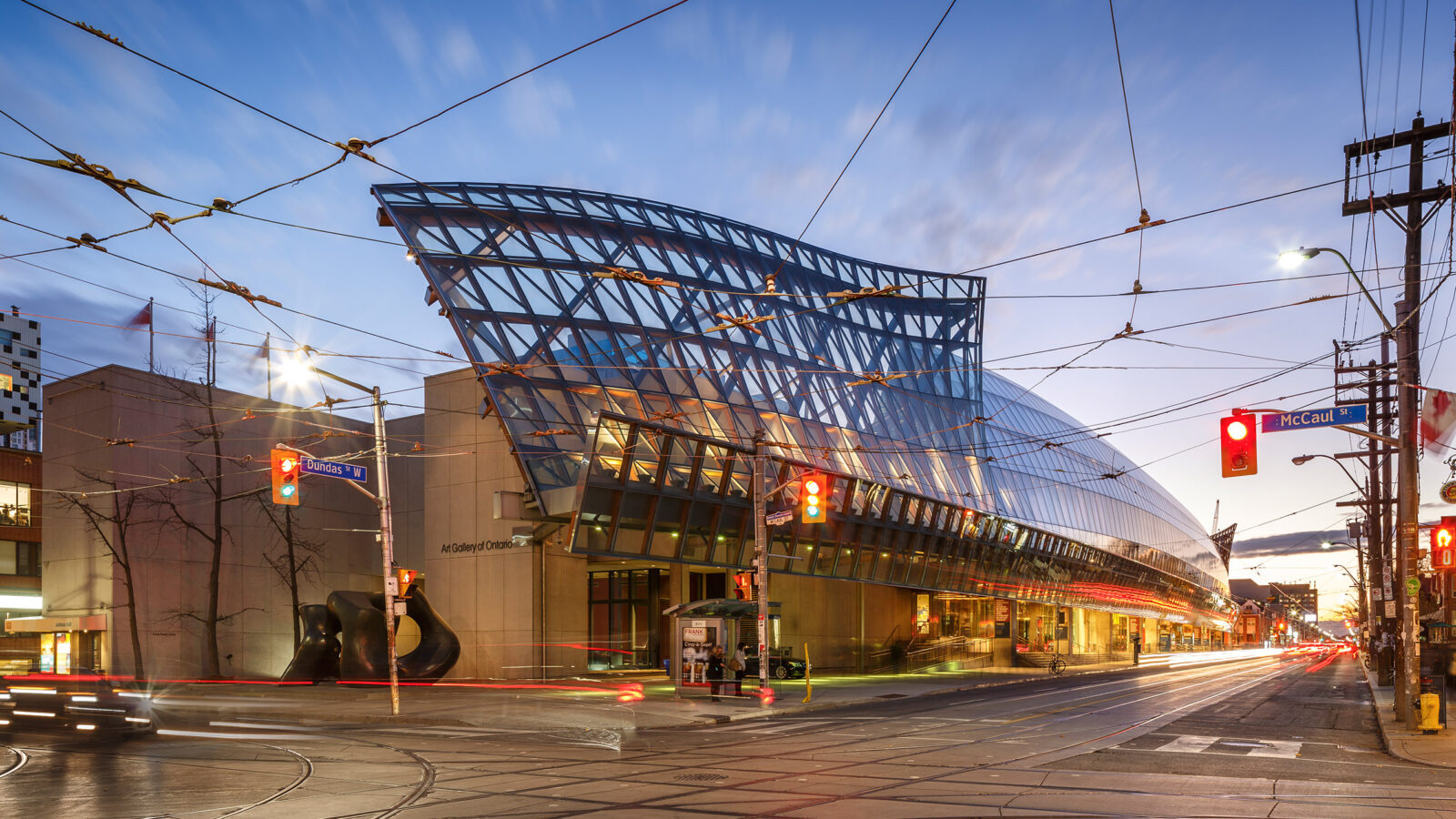 8 Spruce Street, originally known as Beekman Tower, and currently called New York by Frank Gehry, is a 76-story skyscraper designed by Gehry that took 4 years to build. Gehry was 81 when it was completed and it was his first skyscraper.

Based in Manhattan, the building is one of the tallest residential towers in the world. It contains an elementary school and above that the tower holds 898 residential rental units. The skyscraper is made from reinforced concrete which supports the metallic Deconstructivist form. Ripples run across the exterior of the building and these stainless steel pleats function as bay windows for residents. It’s striking but it’s clear Gehry respected the skyline he was adding to and sought to enhance it rather than obstruct it. 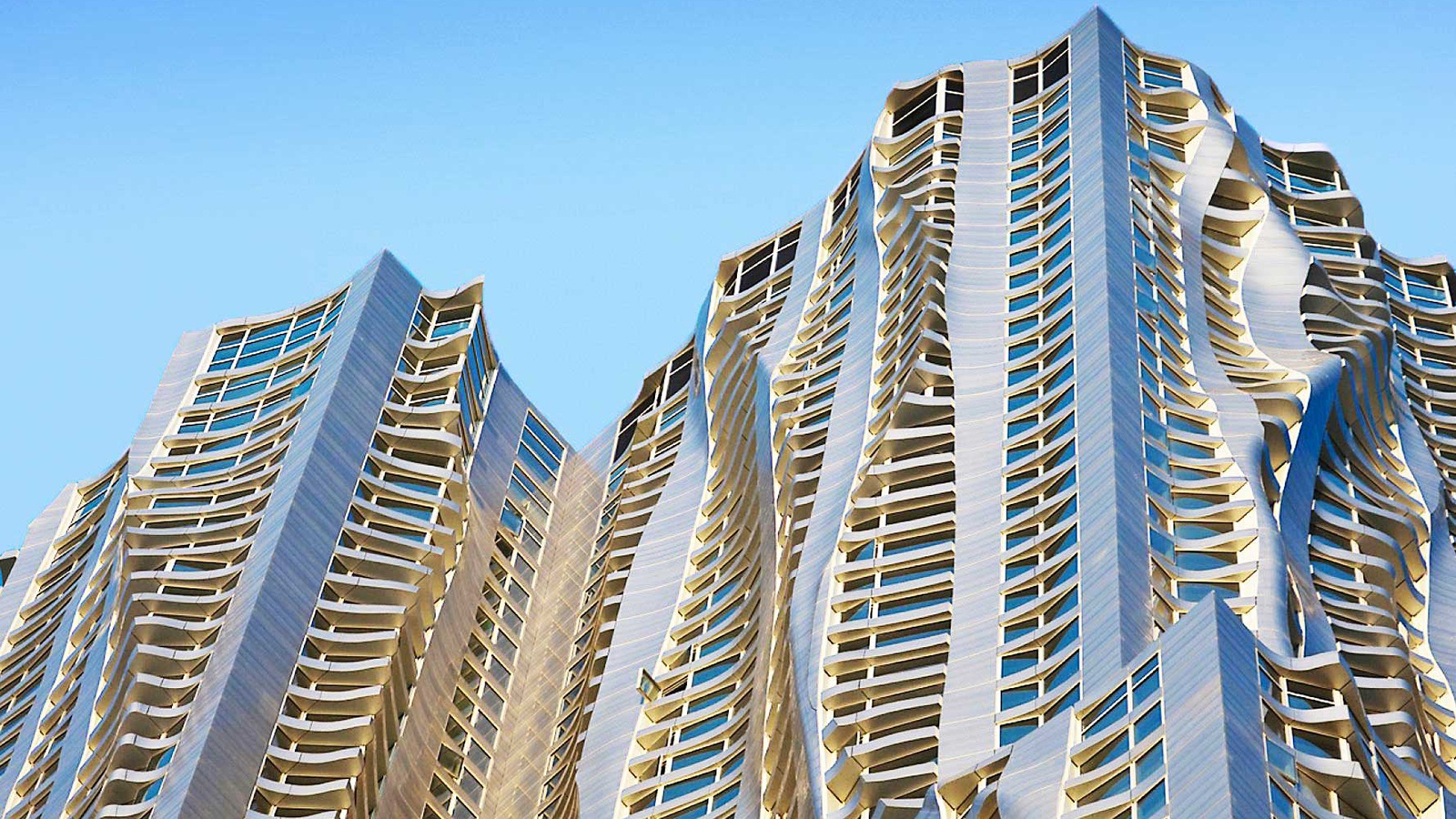