The Gwanggyo store is the sixth branch of Galleria—Korea’s largest upscale department store franchise founded in the 1970s.

The store in Gwanggyo—a new town just south of Seoul—is the sixth branch of Galleria. Located at the center of this young urban development surrounded by tall residential towers, the Galleria’s stone-like appearance makes it a natural point of gravity for public life in Gwanggyo. 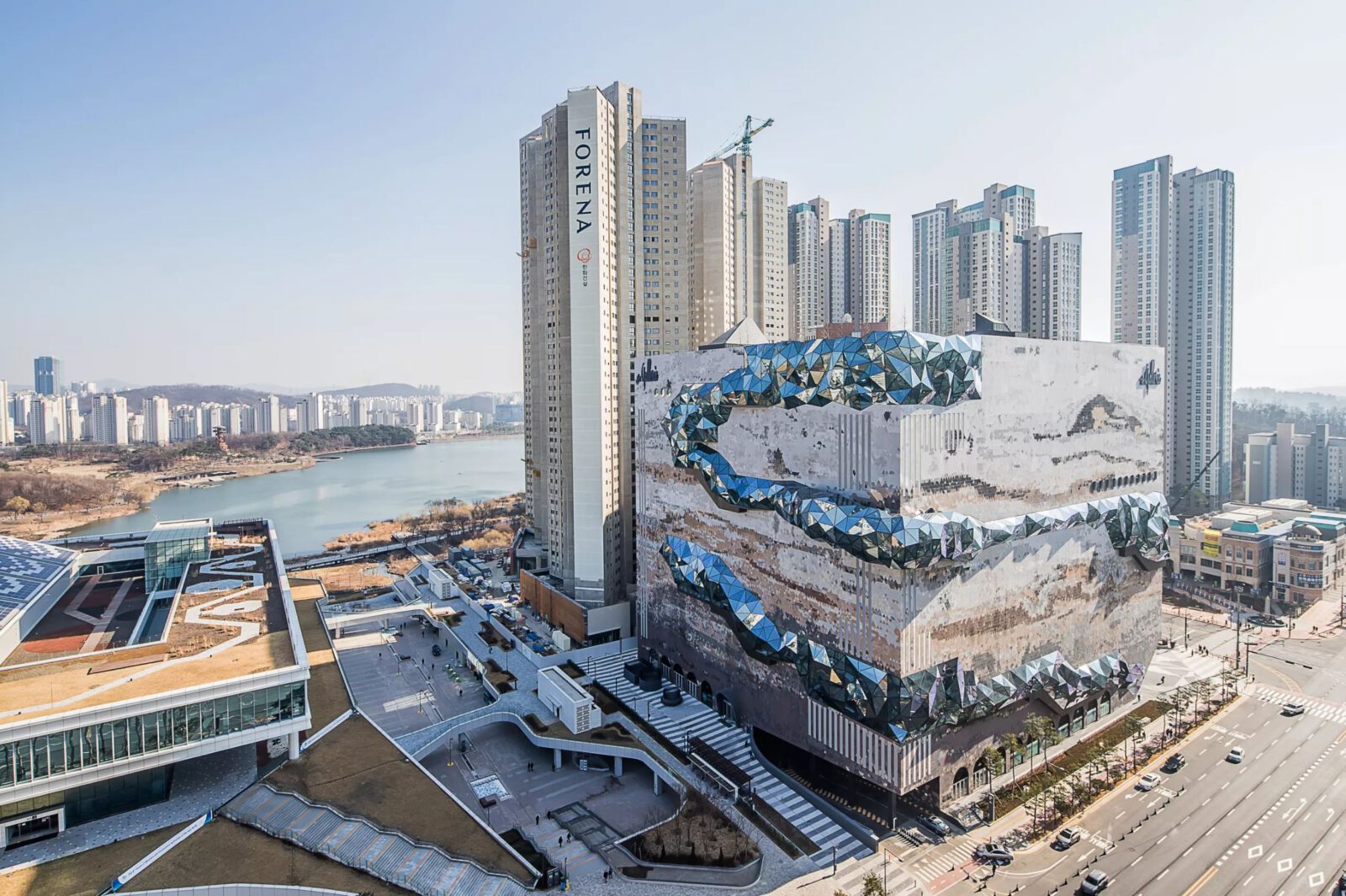 “With a public loop deliberately designed for cultural offerings, Galleria in Gwanggyo is a place where visitors engage with architecture and culture as they shop. They leave with a unique retail experience blended with pleasant surprises after each visit.” —Chris van Duijn, OMA Partner 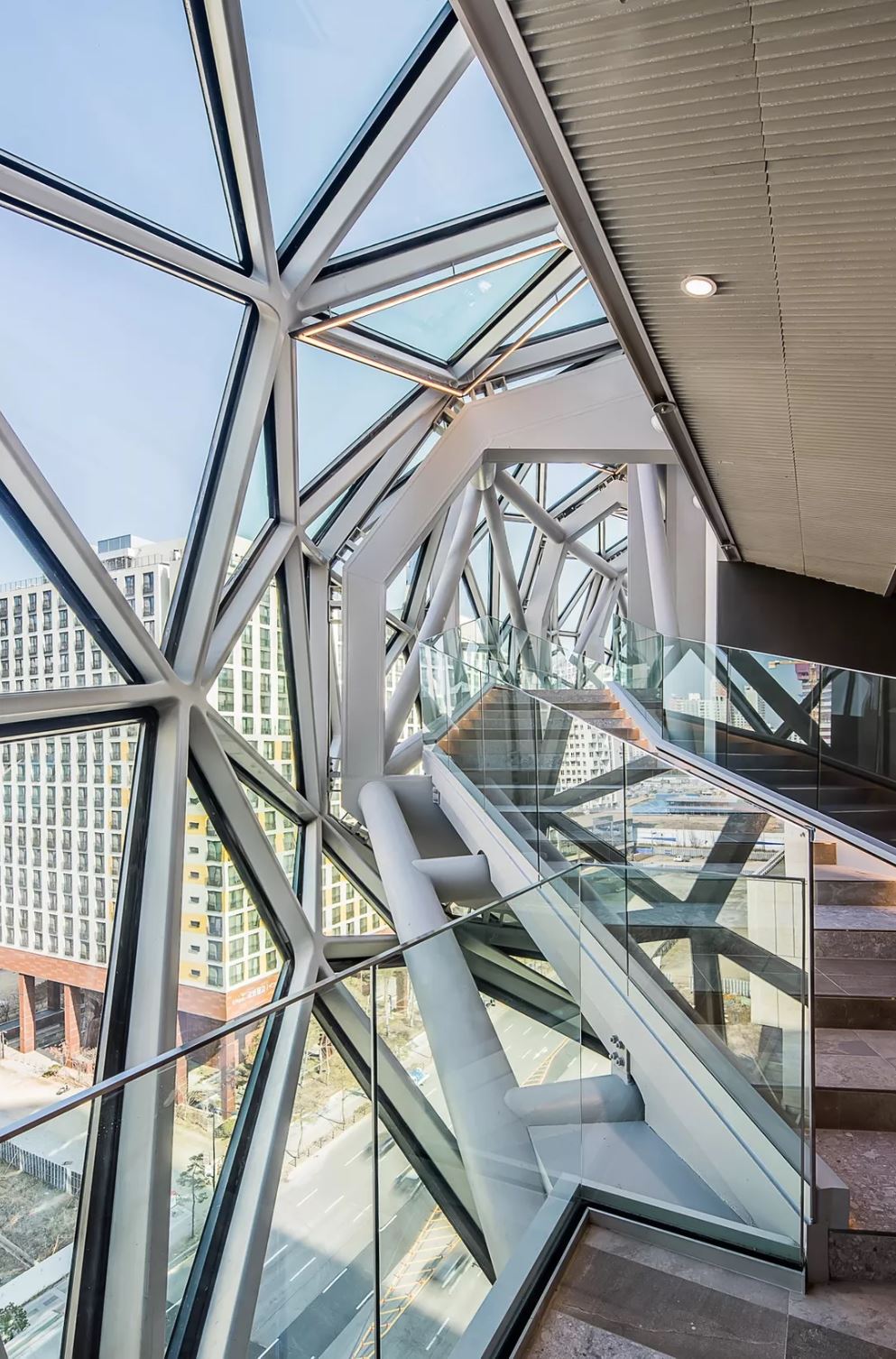 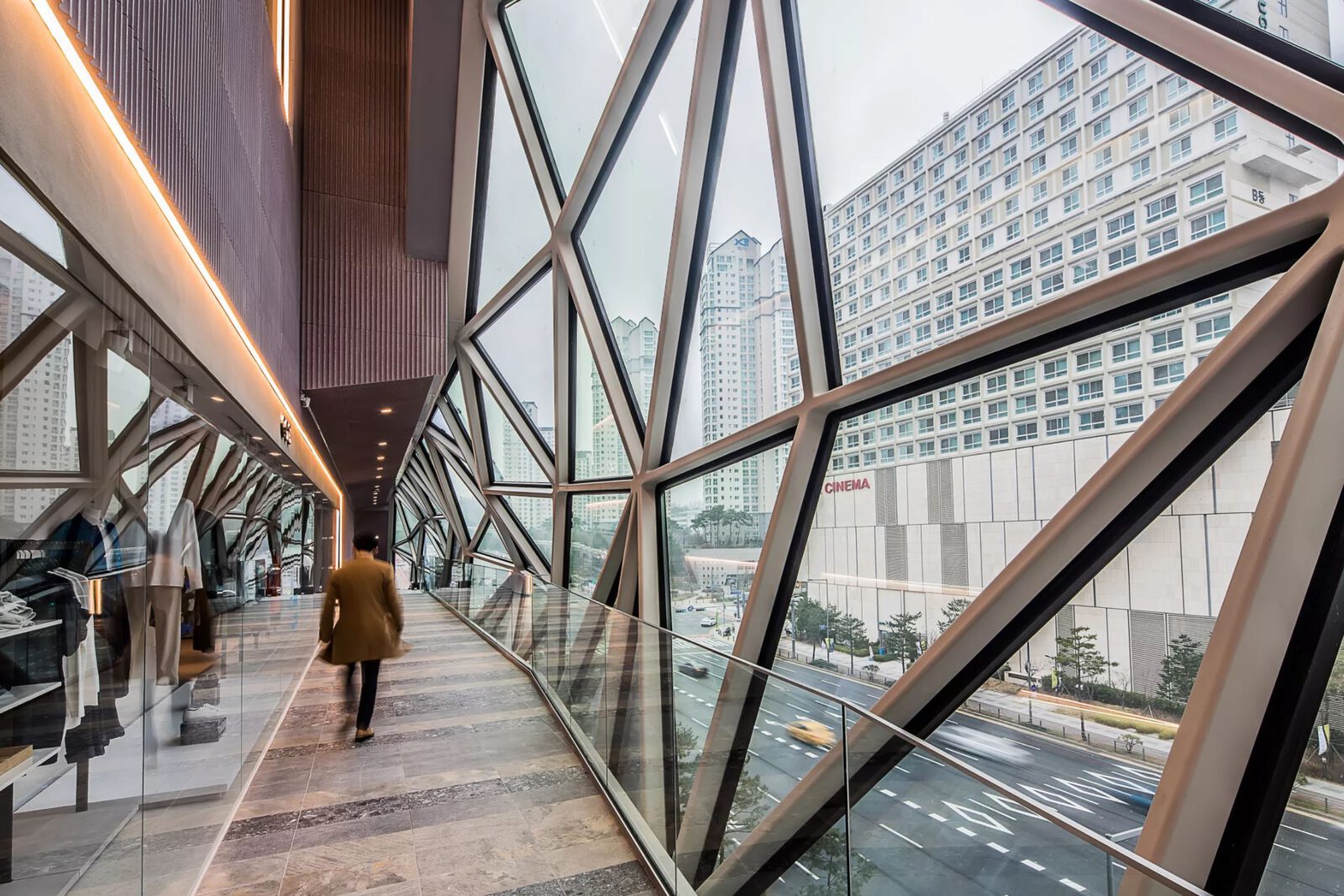 The store is located between the Suwon Gwanggyo Lake Park and ubiquitous buildings in the city: an intersection between nature and the urban environment. The store has a textured mosaic stone façade that evokes nature of the neighbouring park. Appearing as a sculpted stone emerging from the ground, the store is a visual anchor in the city.

A public route is excavated from the stone volume and connects the public side walk to a roof garden—including both retail and cultural activities. It introduces an innovative element to the traditional typology of a department store. 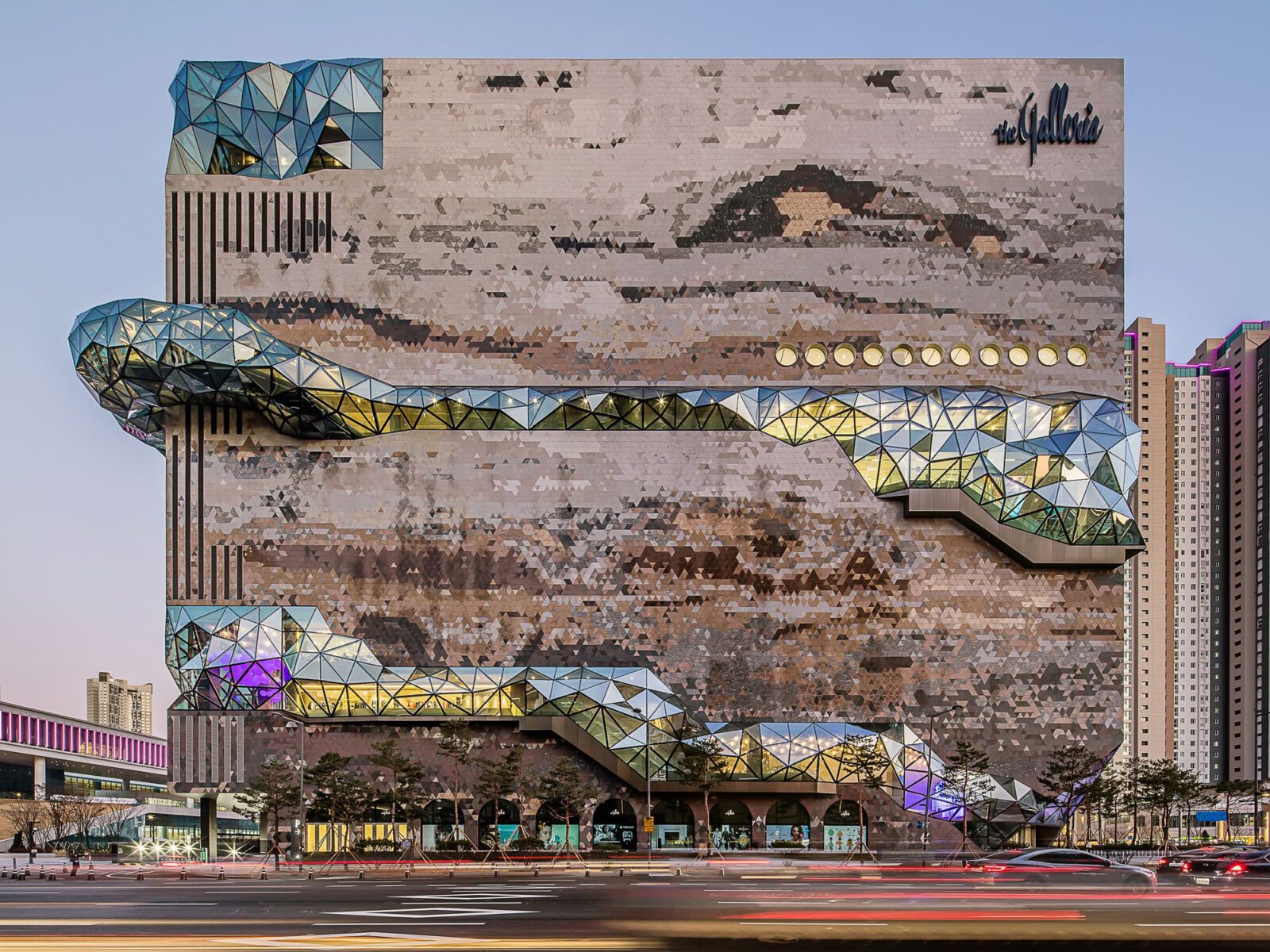 Sculpted as a stone volume with a textured mosaic stone façade, the building evokes the nature of its neighbouring Suwon Gwanggyo Lake Park. 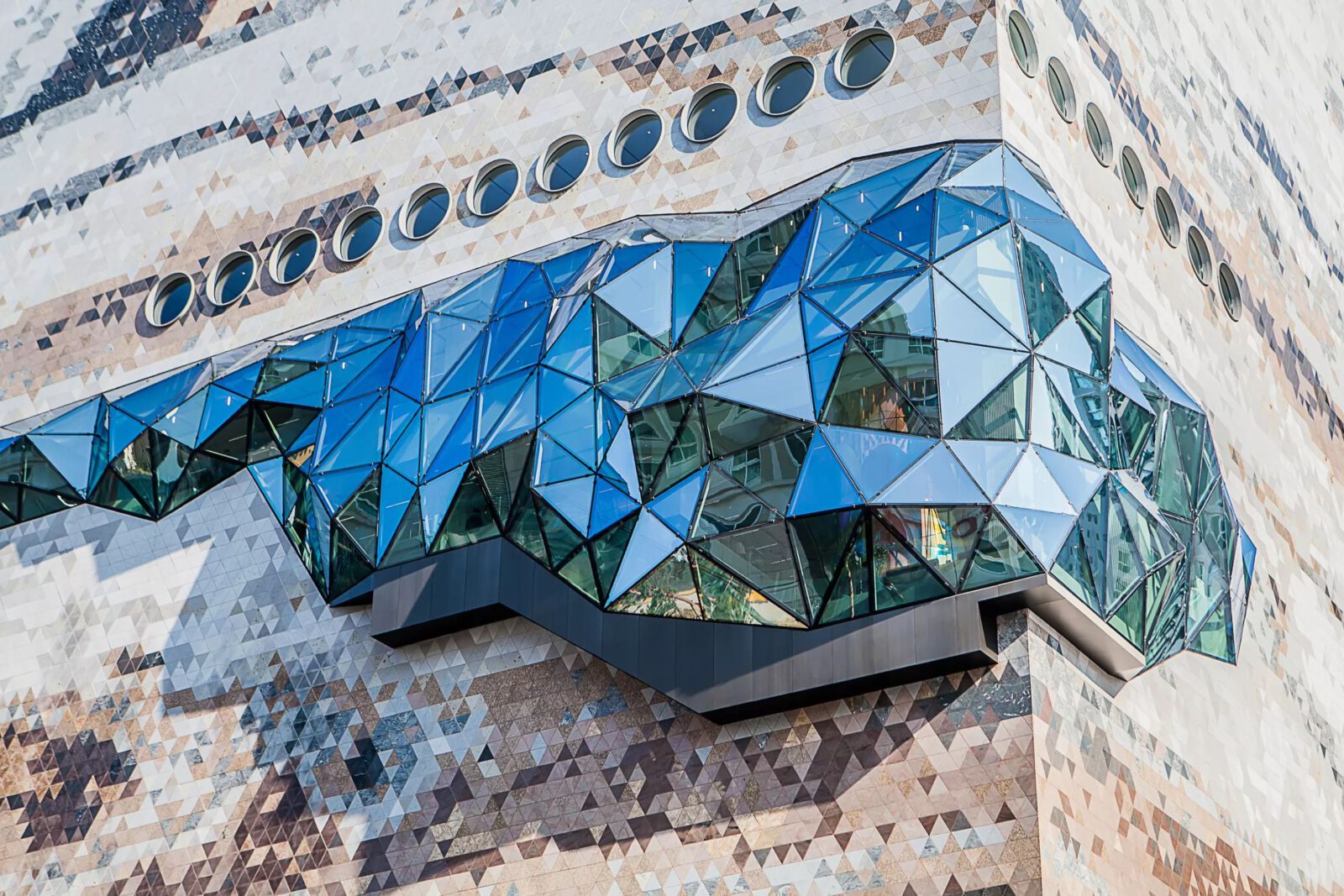 The public route has a multifaceted glass façade that contrasts with the opacity of the stone. Through the glass, retail and cultural activities inside are revealed to the city’s passers-by, while visitors in the interior acquire new vantage points to experience Gwanggyo. Formed with a sequence of cascading terraces, the public loop offers spaces for exhibitions and performances. 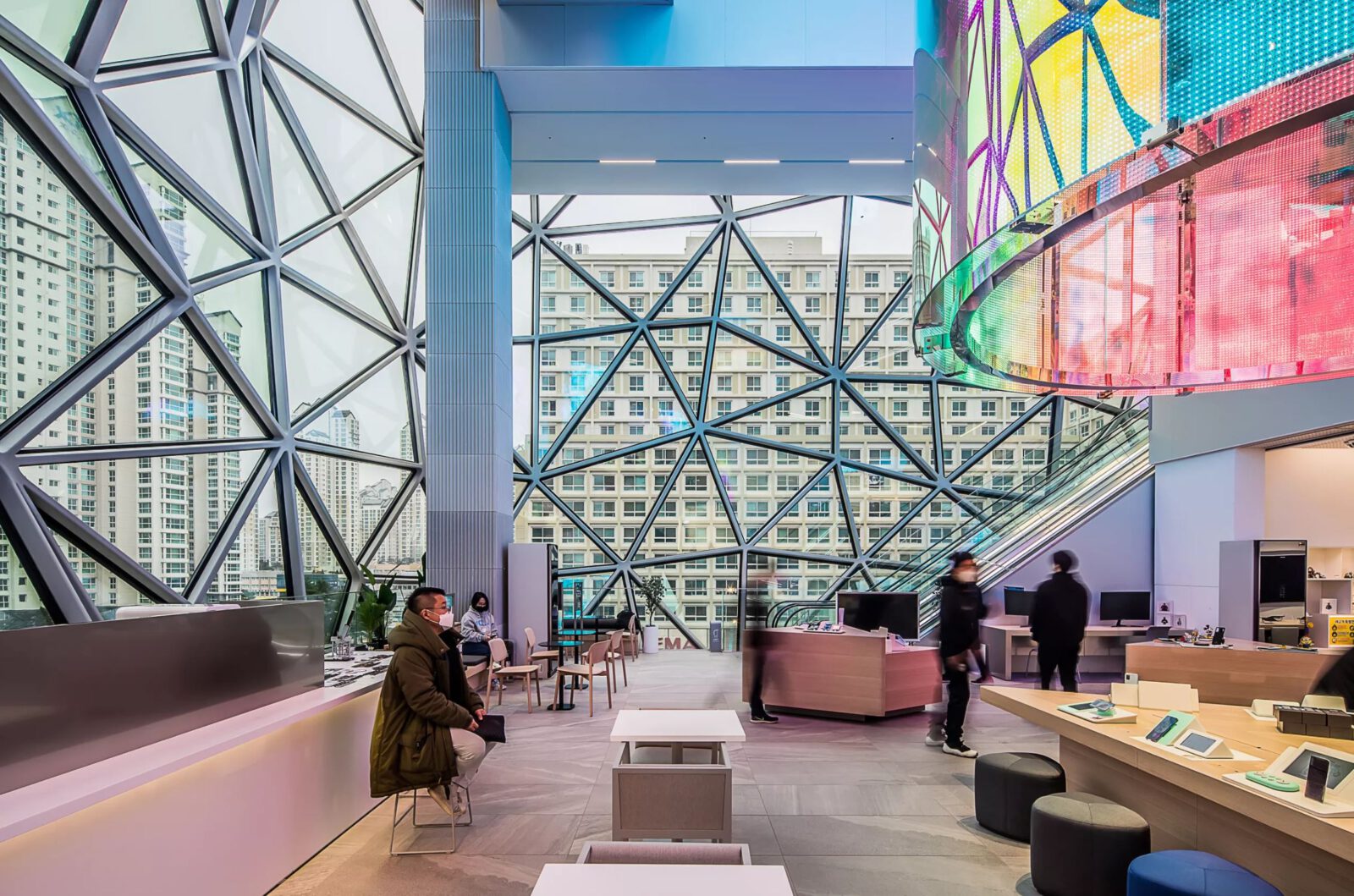 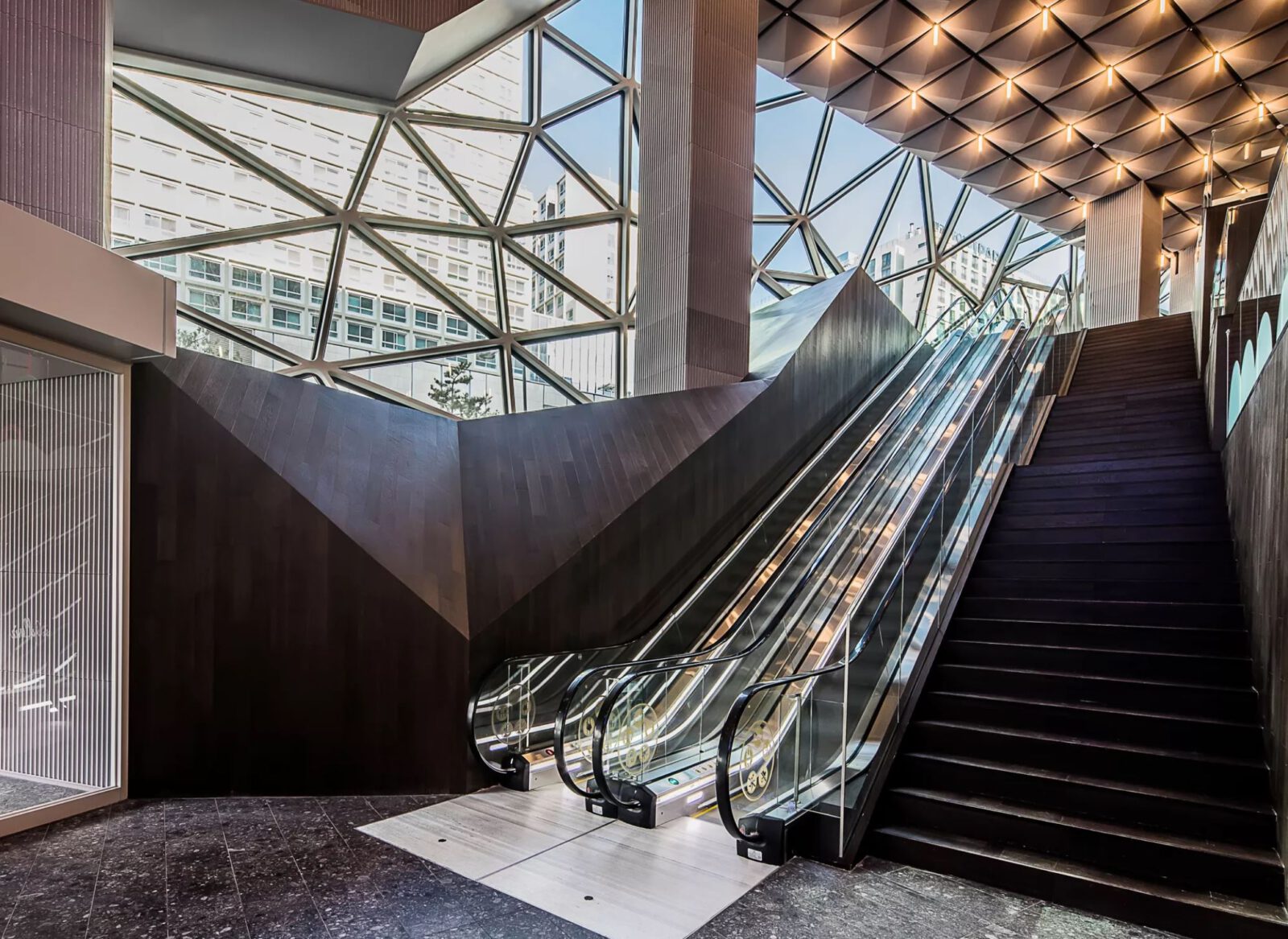 “The Public Loop entwines Gwanggyo and the Galleria by making visible and tangible the activities of shopping typically hidden from the city.” — Ravi Kamisetti, OMA Associate

A place where retail and culture, city and nature collide, Galleria in Gwanggyo offers a get away from the predictability of shopping. 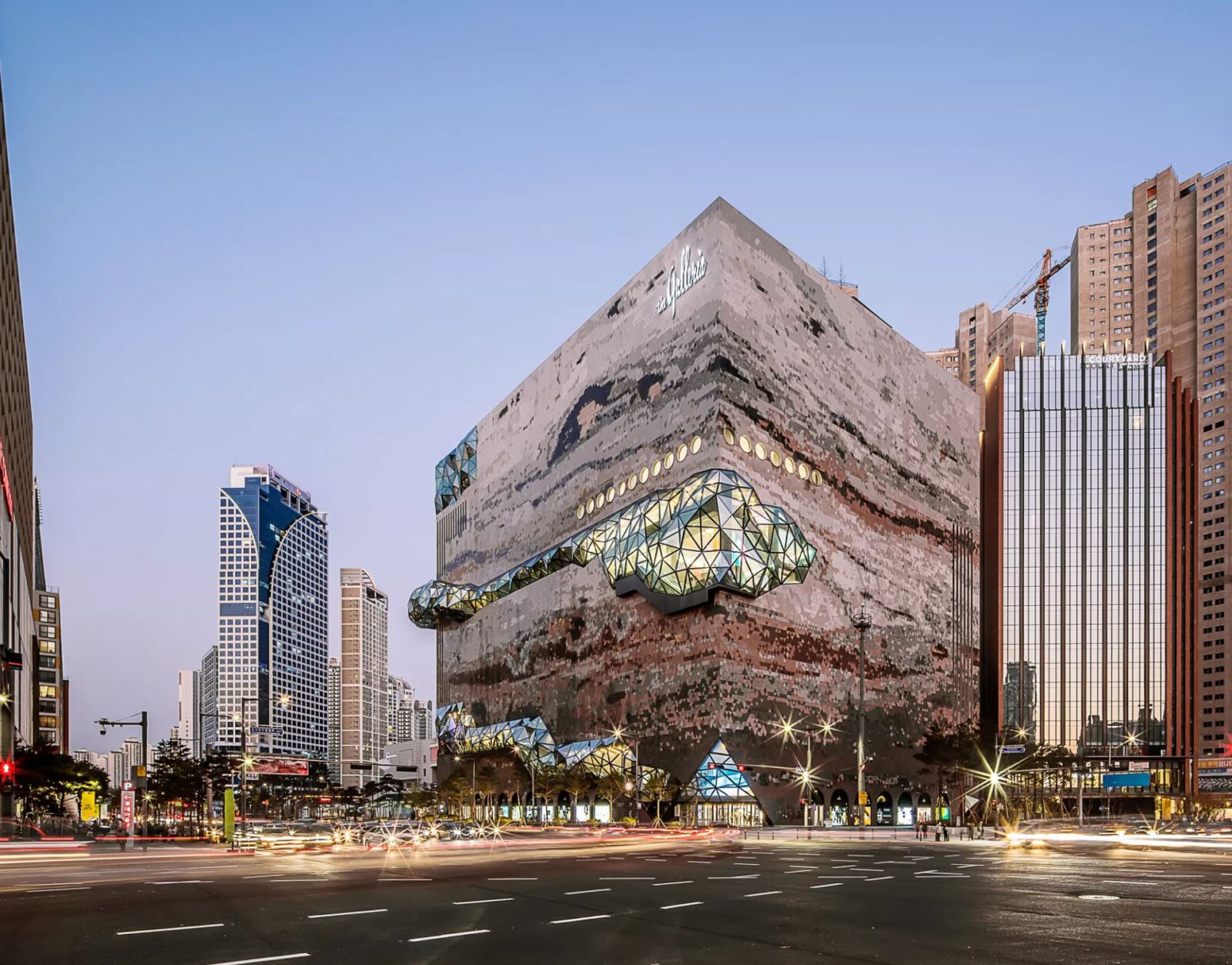 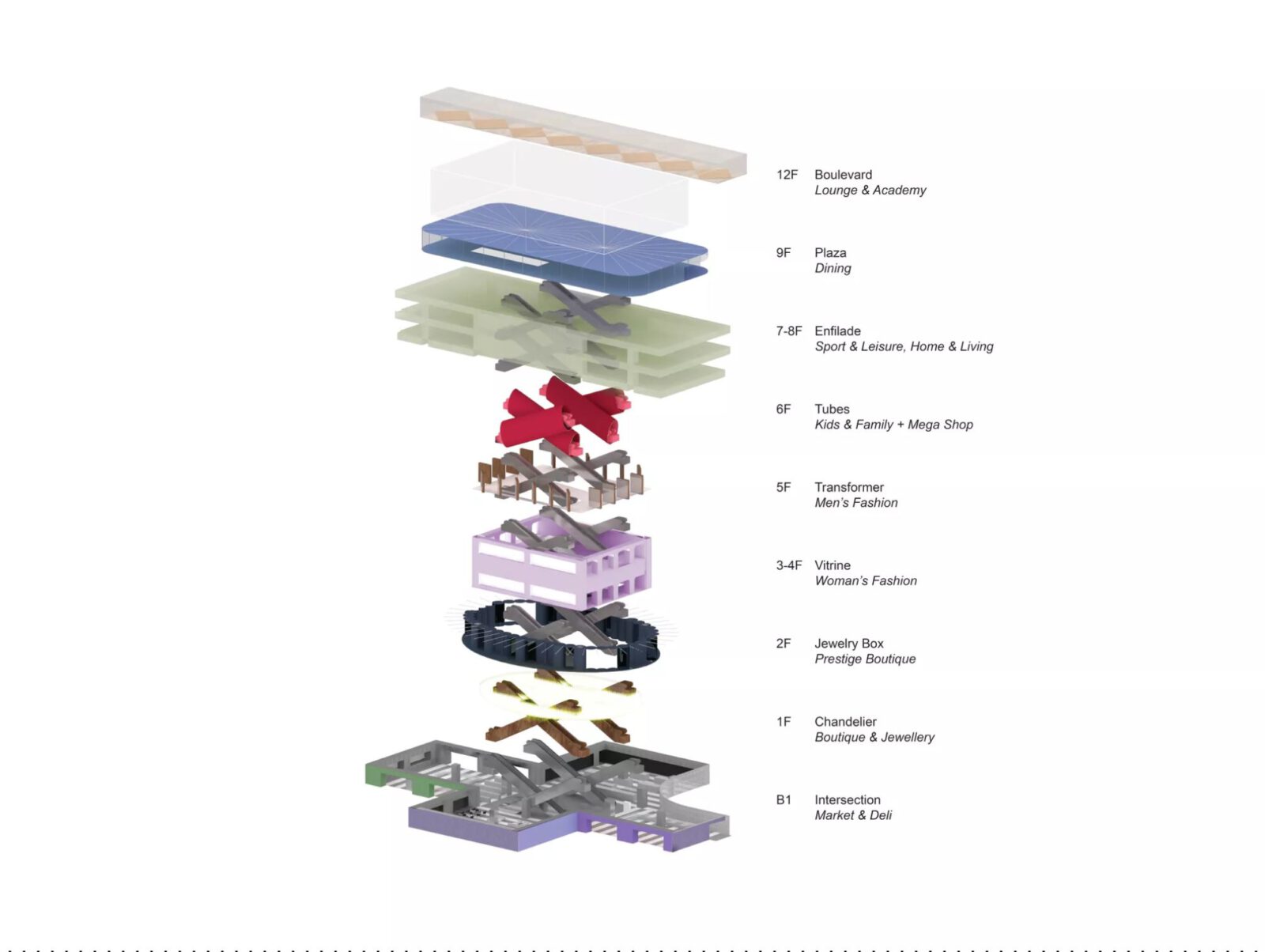 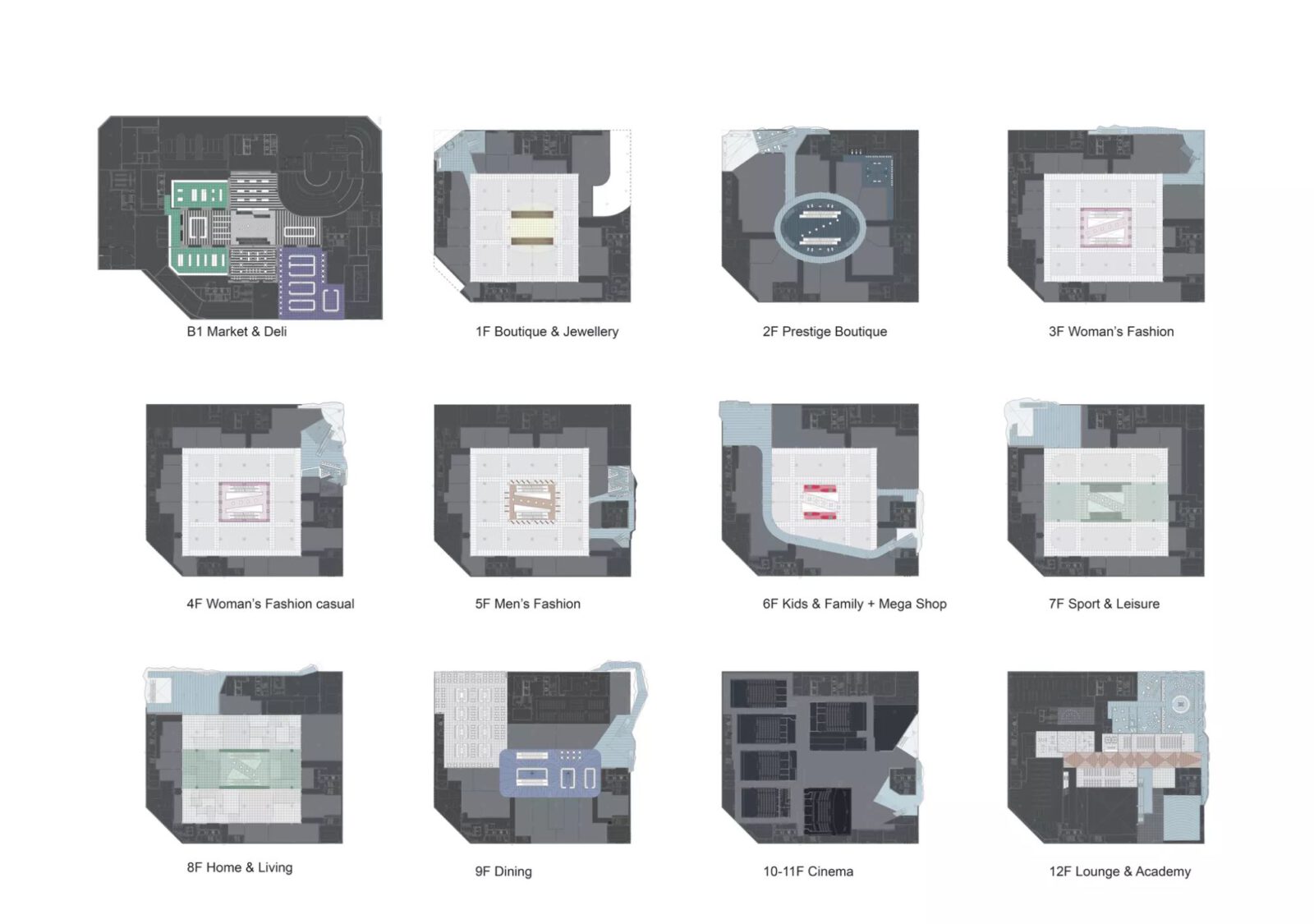 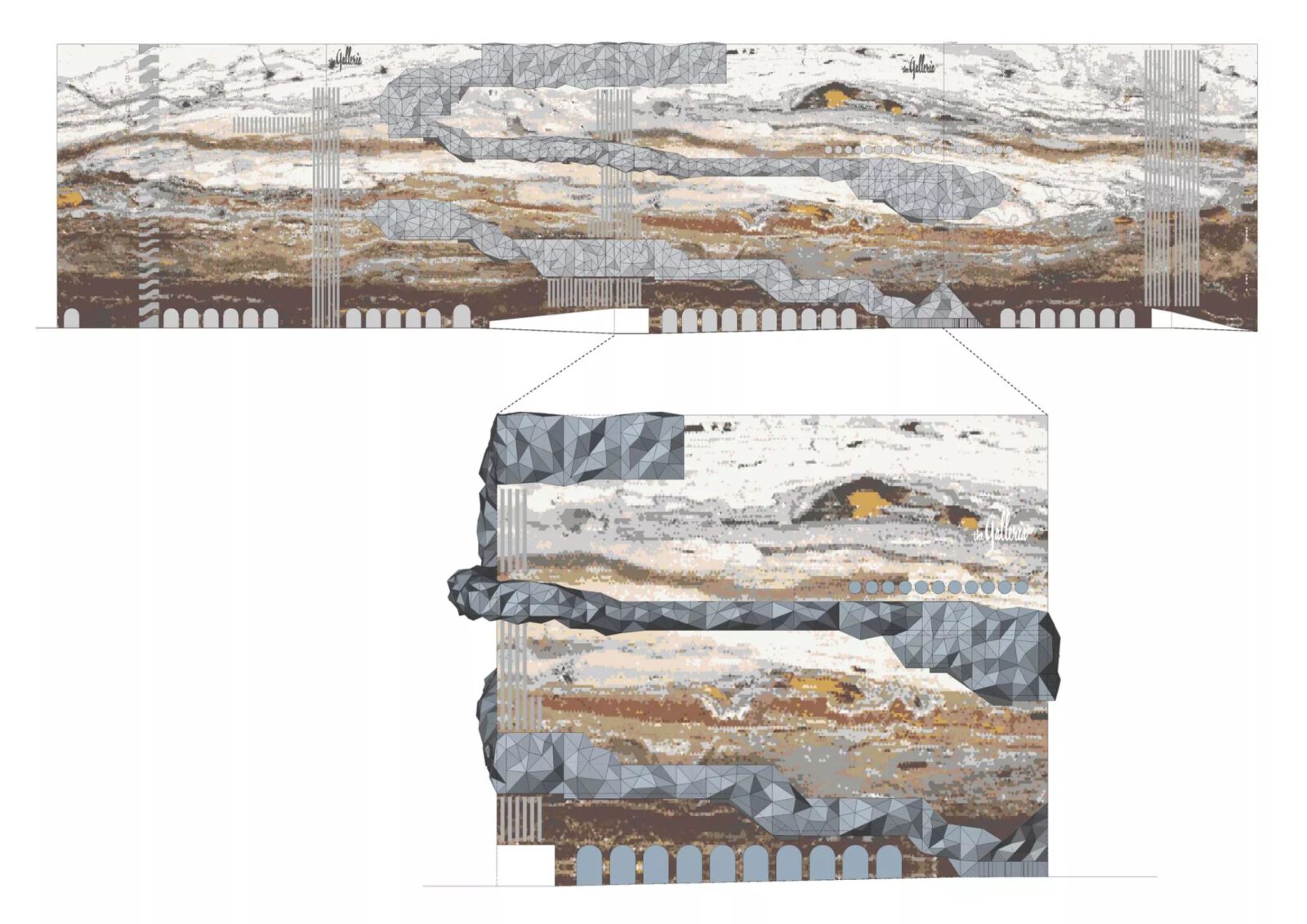 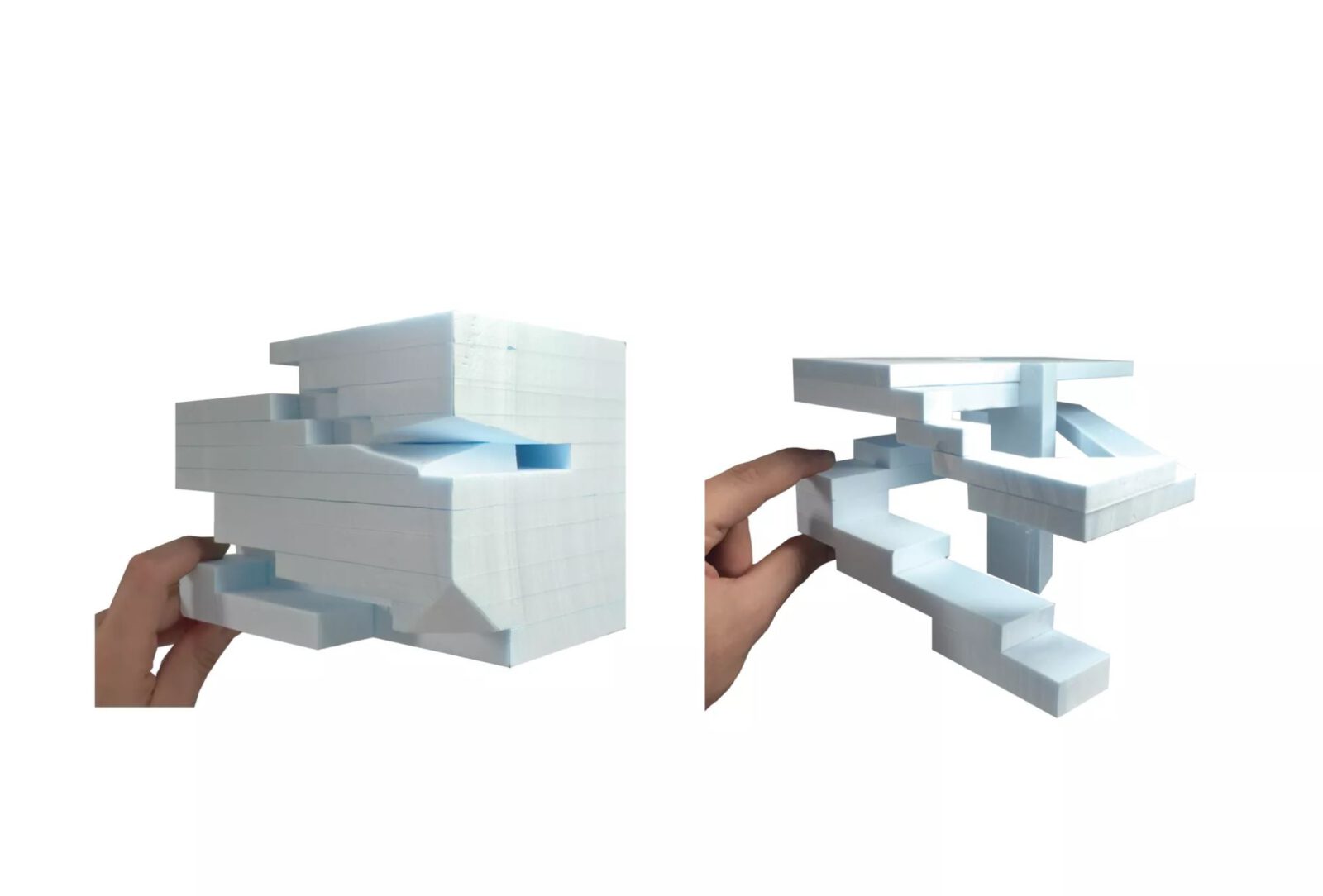