Peter Haimerl.Architektur designed Blaibach’s concert hall in Bavaria, Germany, a building which represents the heart of the urban development to revitalize the new centre of the city.

The building is located next to the new community centre and complements the space of a new village square that was realized with funds of the state urban development support. 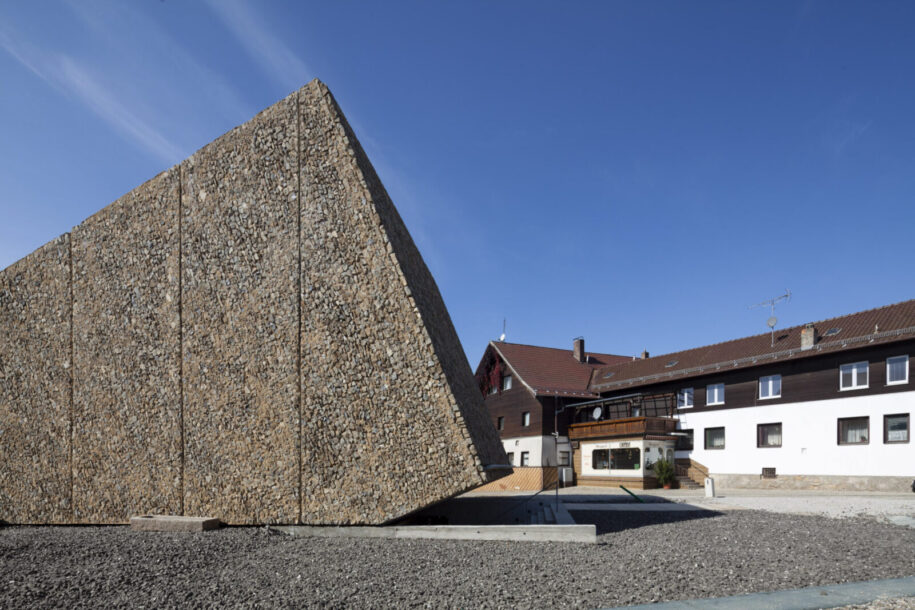 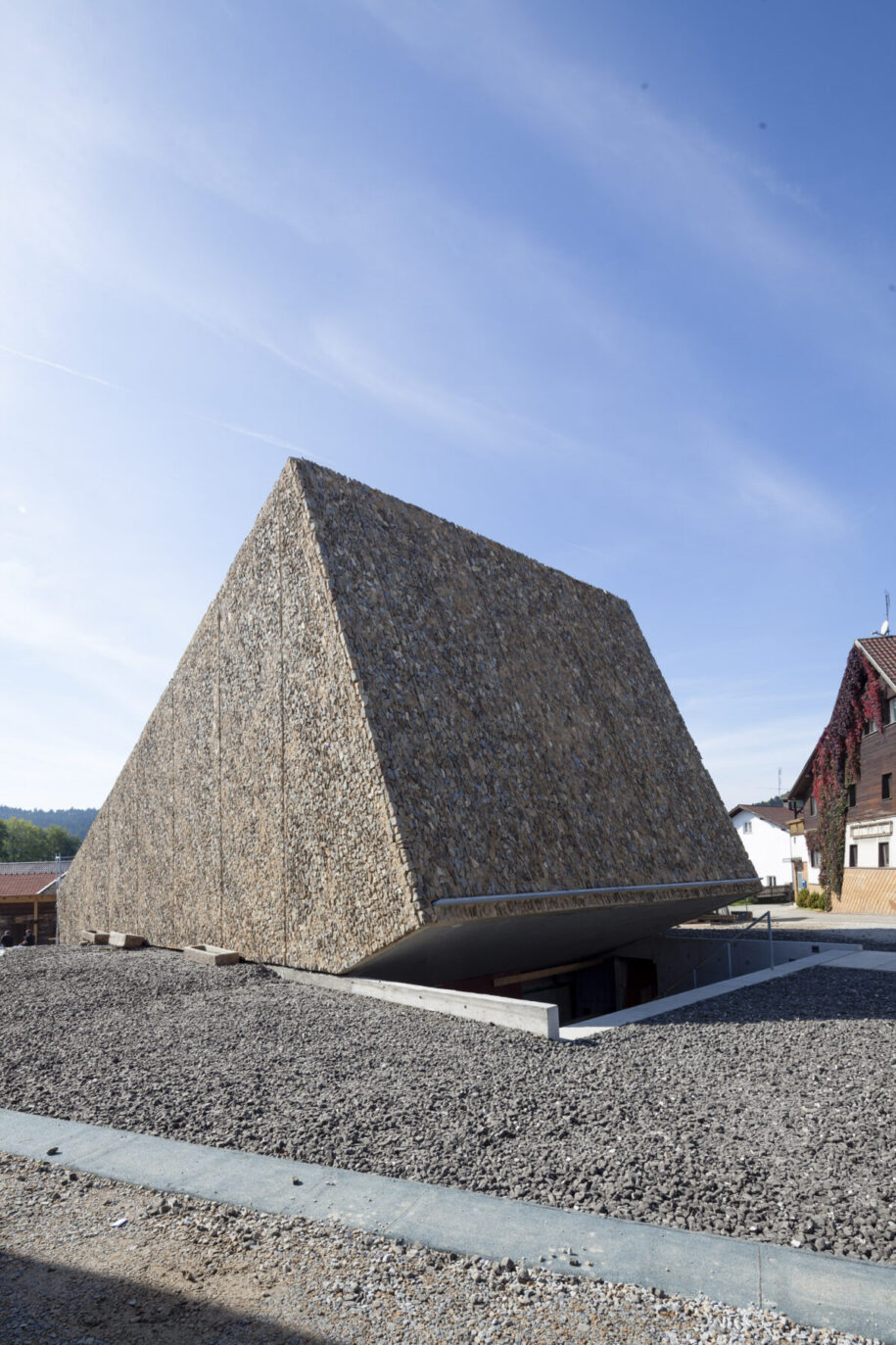 The concert hall is a solitaire of concrete with an inclination above the slope in the village centre following the topography and linking with its granite facade to the stone carver tradition of Bailbach. 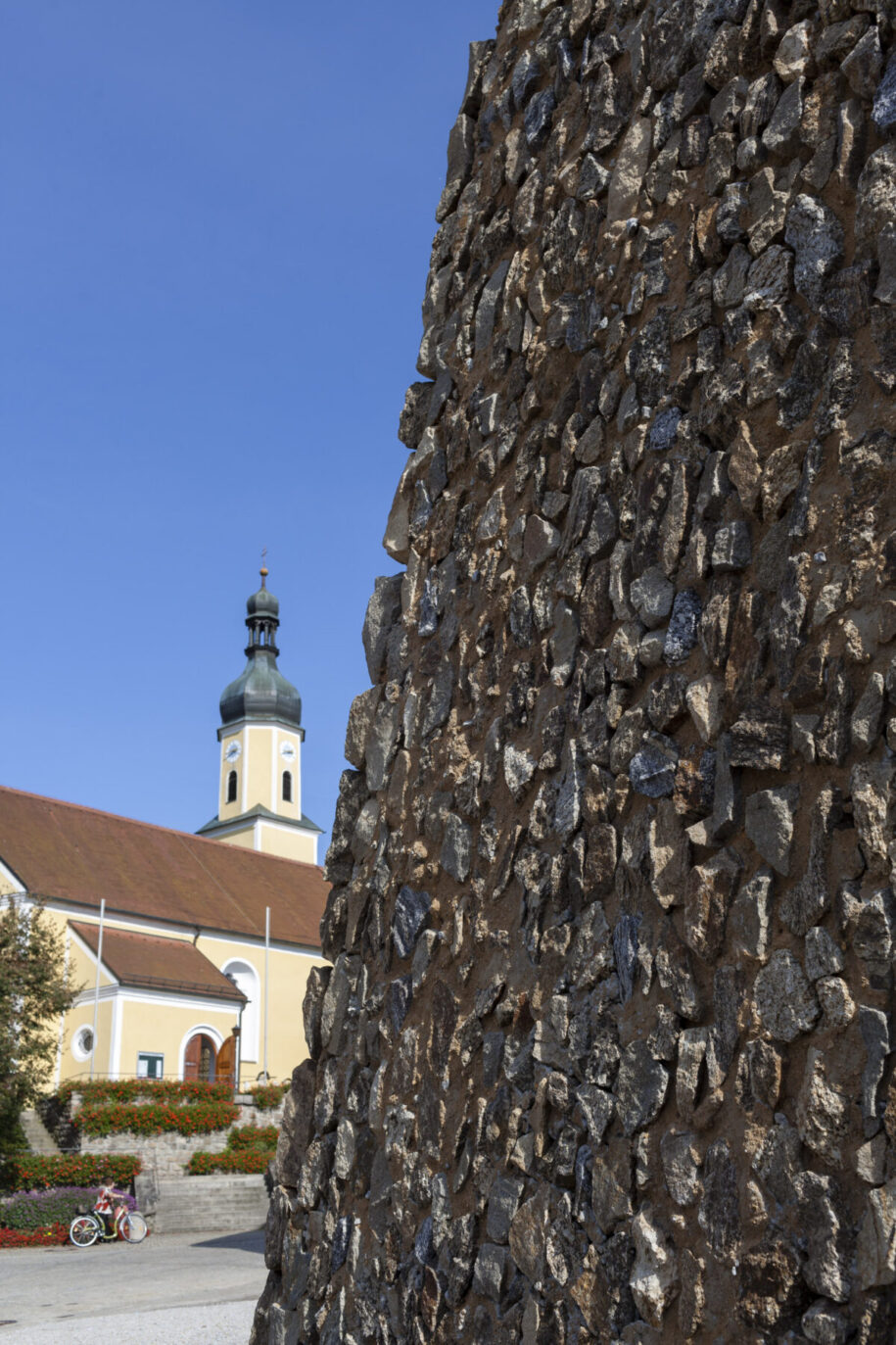 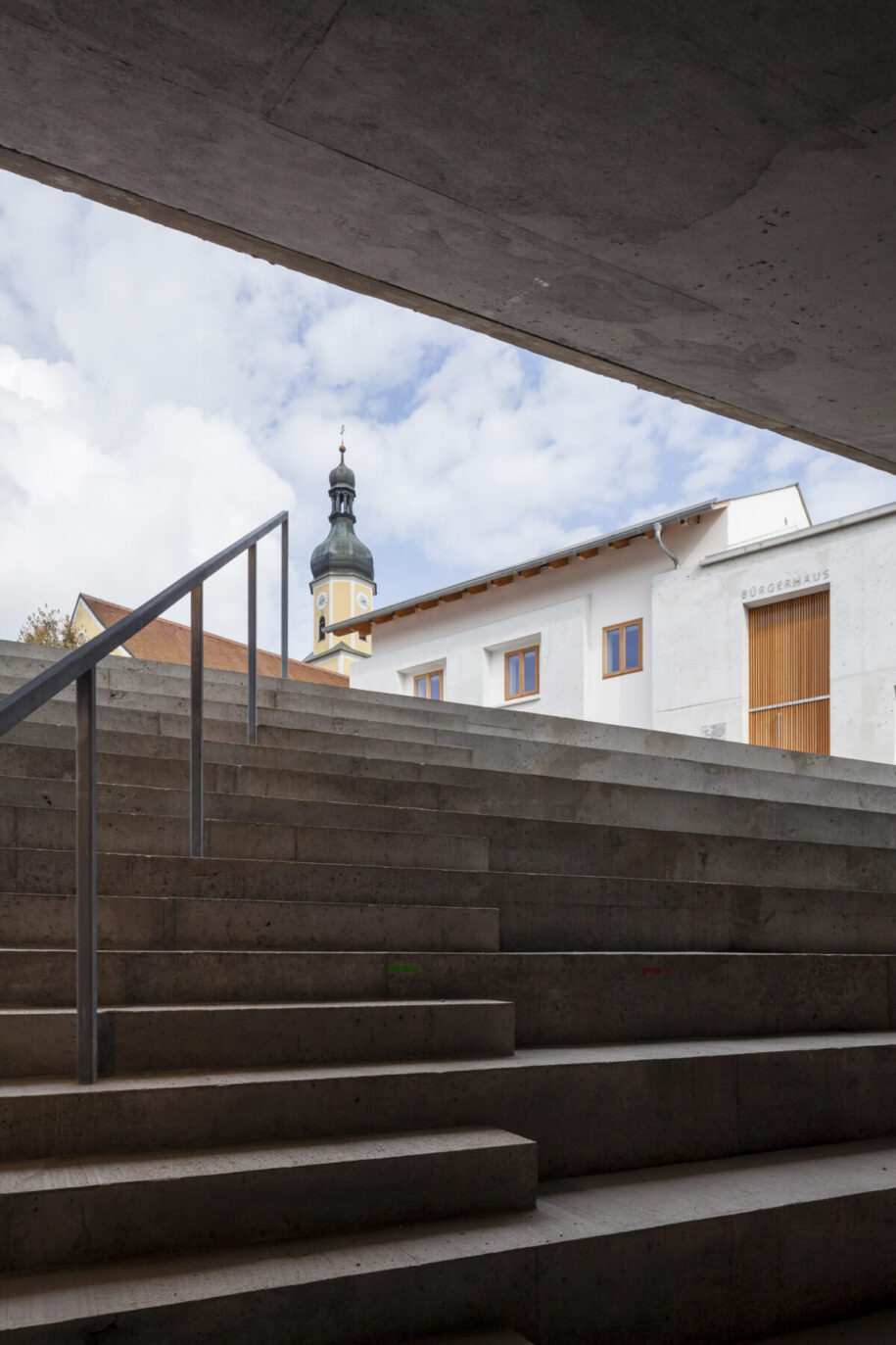 The monolithic tilted building opens itself to the visitors at the new village square and guides them by a staircase to the foyer below the surface. The foyer provides not only the functional areas like wardrobe, sanitary rooms and bar, but also leads the visitor excitingly around the auditorium into the inner concert hall. 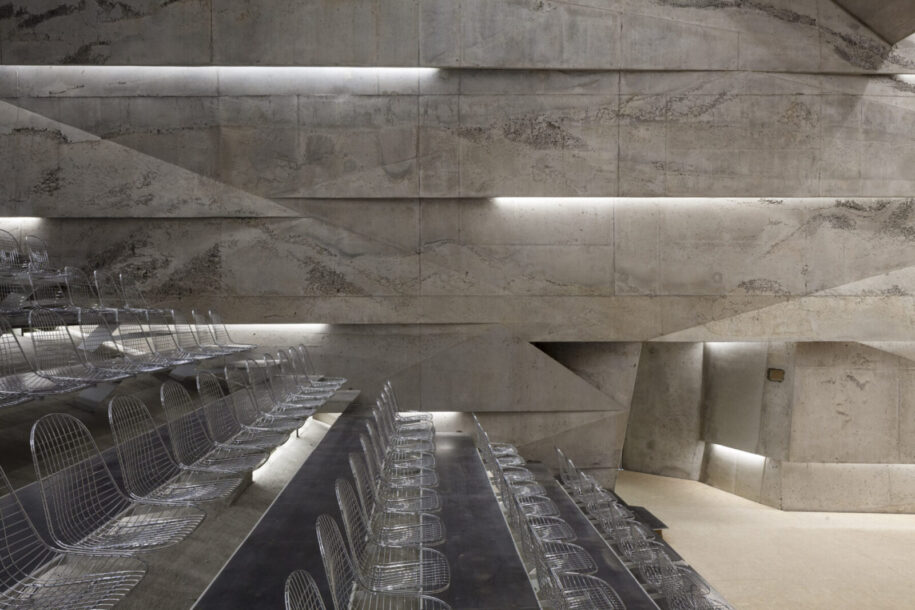 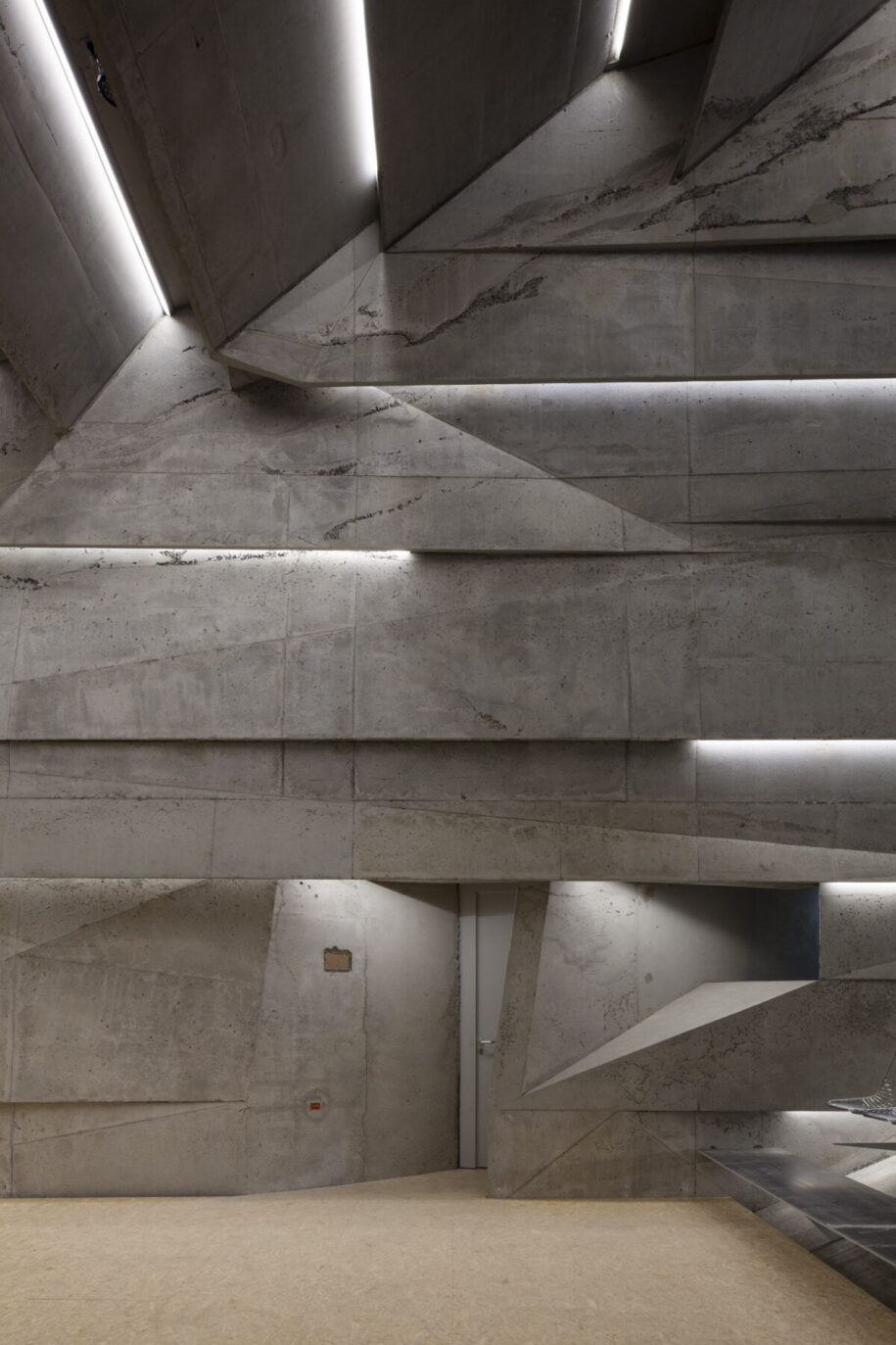 The hall unfolds its acoustics within the seemingly light building. While the precised light slits illuminate the space. The building body is made of pre-cast concrete and only a highly intricate constructed formwork made the realization of the difficult form possible. The dominant tilted surfaces of the concert hall are based on acoustic specifications and include besides LED-lights also bass absorber behind the light slits as well as underneath the steps for optimal acoustics. The concrete in the hall is untreated. Its lively surfaces help to absorb the medium-height tones. 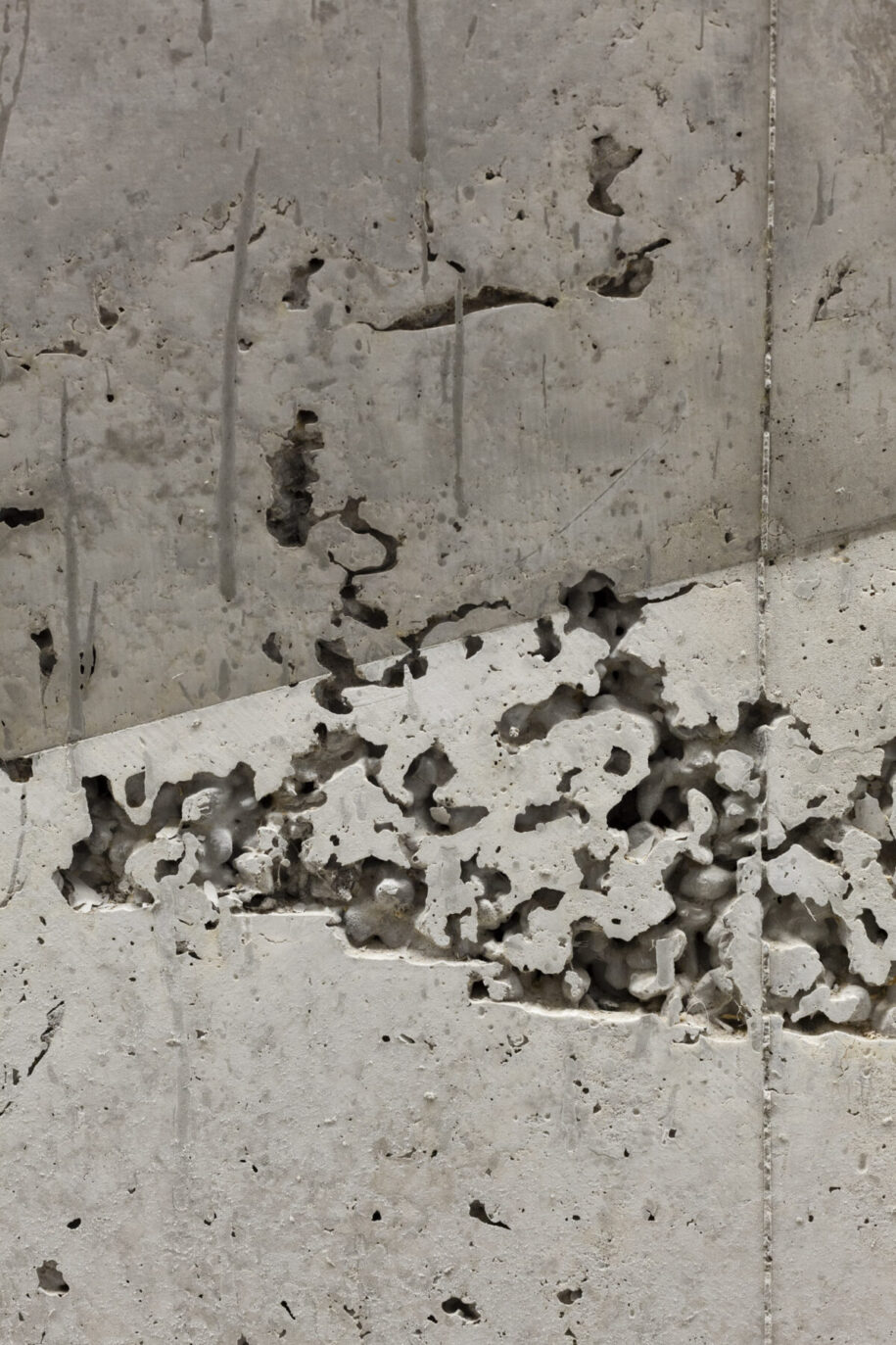 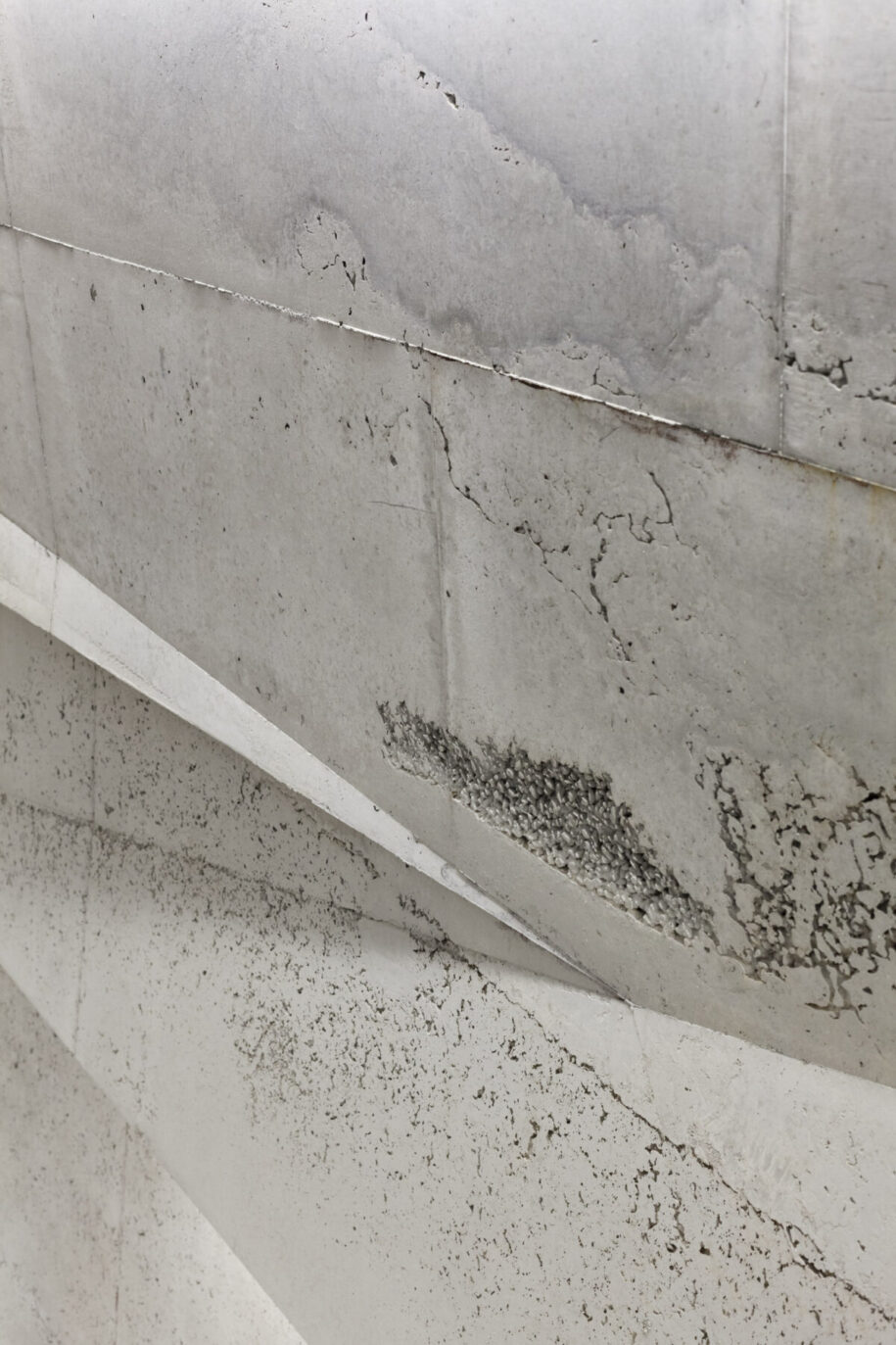 The inclination of the building – based on the increase of the slope – carry the gallery. The seemingly transparent seats, which are fixed on iron swords, appear to float above the light slits. The stage of the concert hall, which is only designed for its actual function not as a multifunctional room, is equipped with modern LED-stage technology. 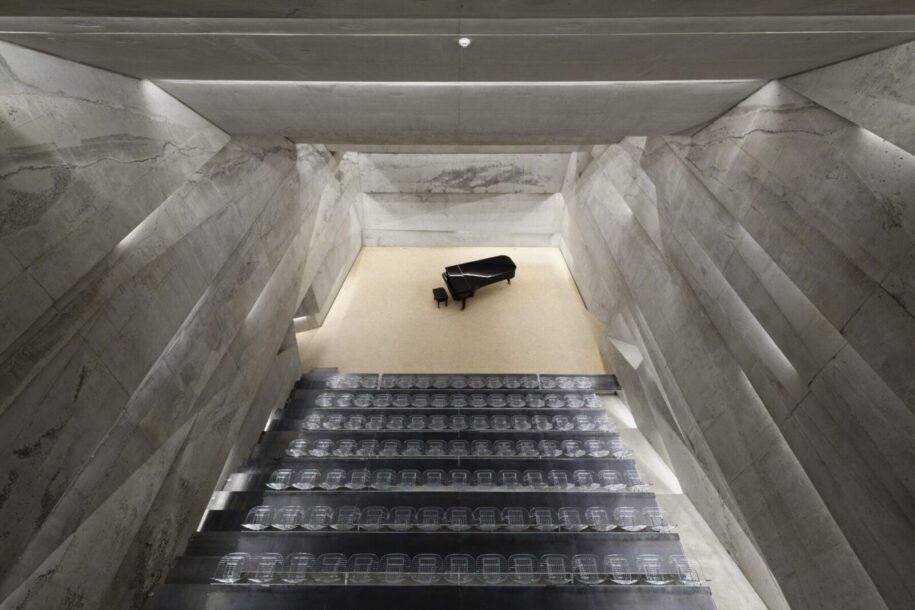 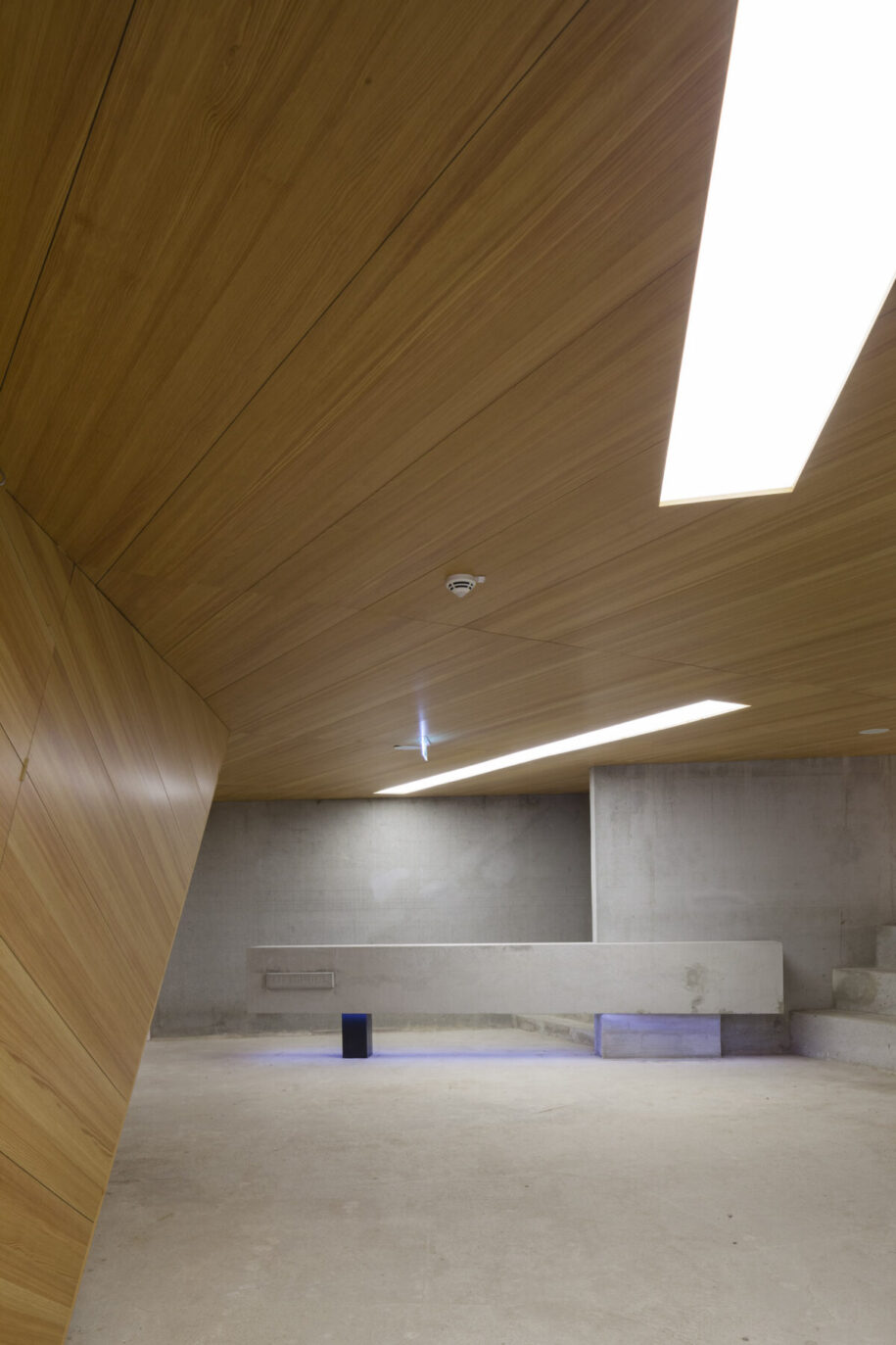 Peter Haimerl was born in 1961 in Eben near Viechtach. Since 1991 he is pursuing the confines/ possibilities of existing technologies in different projects. The widely publicized project “Birg mich, Chilli!” – a converted farmhouse in Eben – was presented with the “Architekturpreis Beton” in 2008  and the “Best Architects Award” in 2009, as well as received a recognition of the German Architecture Award in 2011. The “Salvatorgarage” in Minich was awarded with the  prize for “Stadtbildpflege der Landeshauptstadt München”. With his company “Hauspaten Bayerwald” he preserves the building tradition of Bayerischer Wald and try to convince the regional  inhabitants of the high quality of their building culture and prevent them from destroying their own history. He is convinced, as well as Thomas Bauer, that Bayrischer Wald and its inhabitants deserve more high /advanced culture than they actually believe. 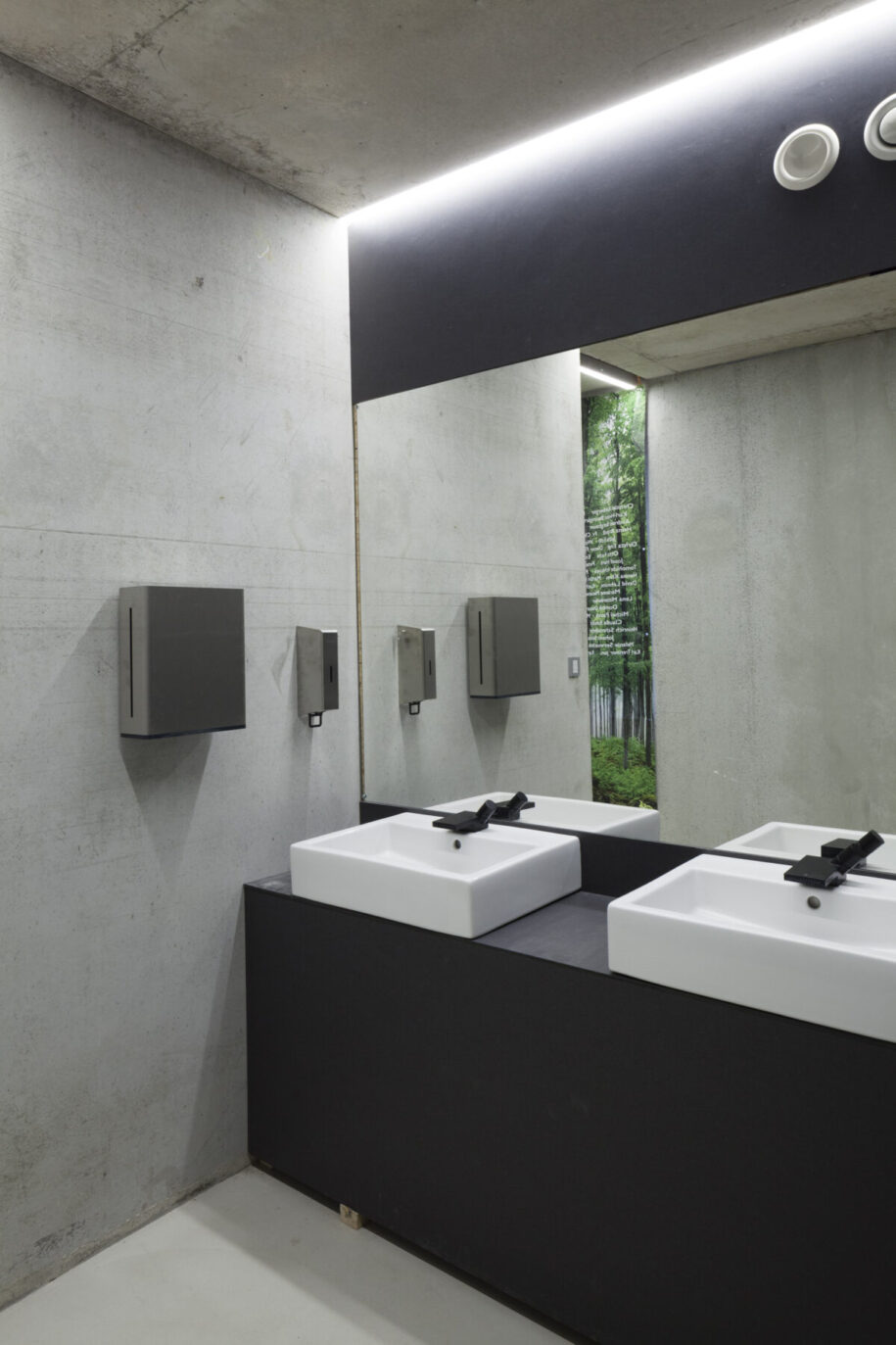 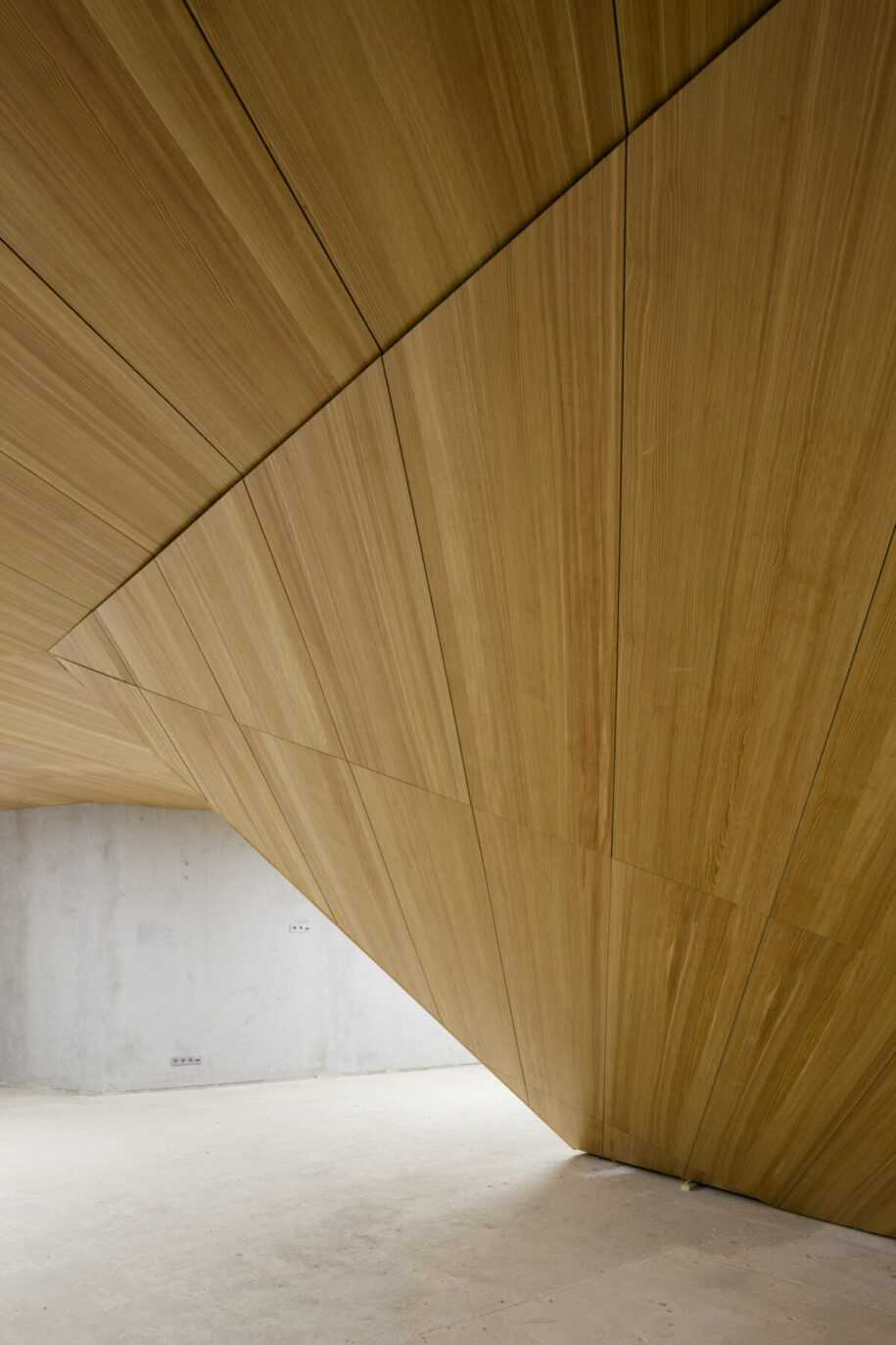 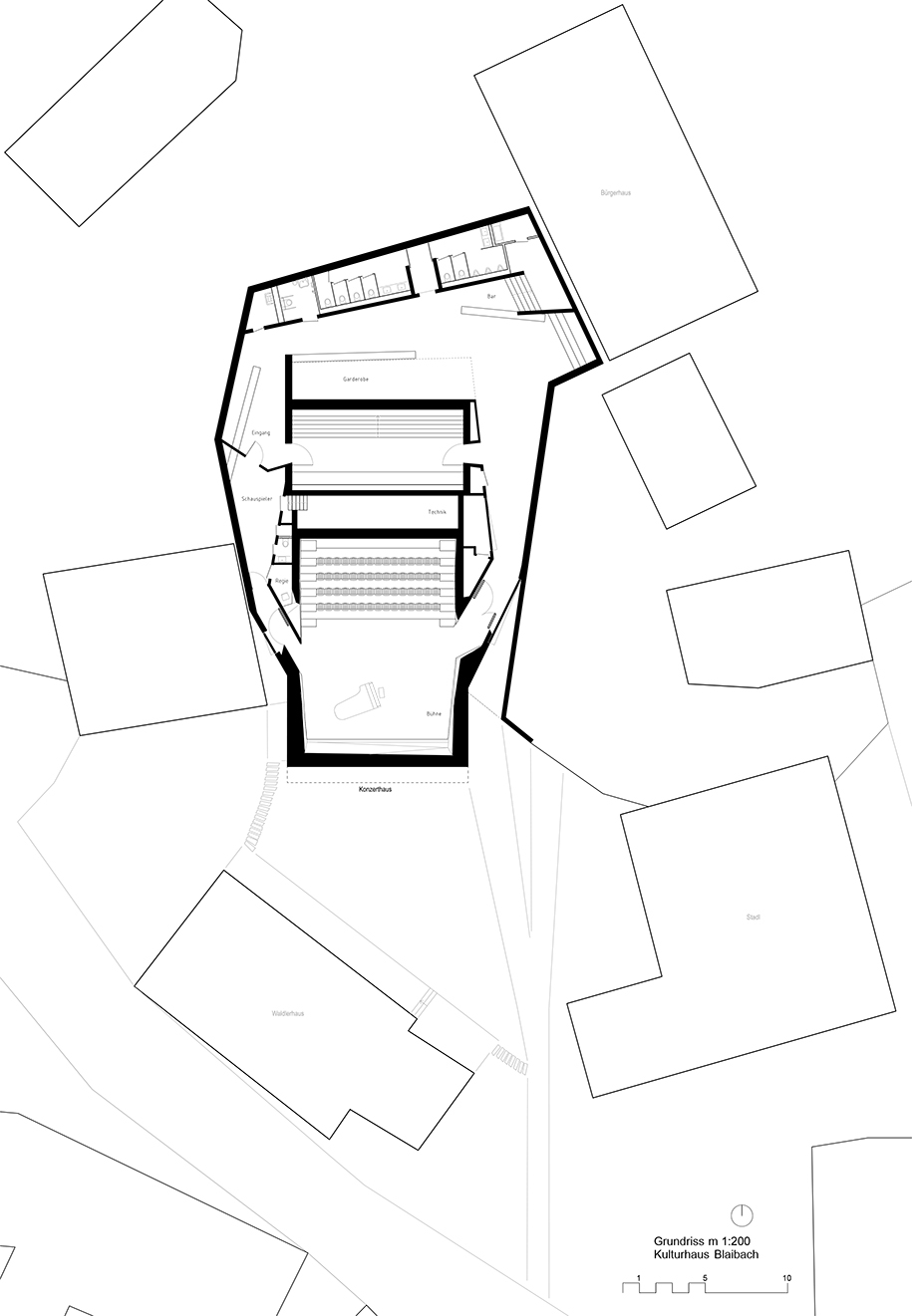