HARQUITECTES designed a winery in the heart of Gratallops village in Spain employing bioclimatic strategies to deliver a highly interesting building form organised as an amalgam of green roofs, stone, brick, and plaster.

A Priorat appellation vintner needed a new winery in the heart of a village, Gratallops, for his increased production. The challenge was to allow the winery itself to contribute to the biodynamic winemaking process, striving to optimise the building’s behaviour based on passive principles to the greatest possible extent.

The L-shaped polygonal plot is in the heart of a typical historic village context, with narrow streets and row houses except for the church, the town’s most dominant, defining building due to its unique character and size. The site boundary is marked by a stone wall, a former handball structure rising 10 metres at one point, which follows an irregular line.

The geometry of this party wall, an amalgam of stone, brick, and plaster rendering, was the starting point for the project.

The compulsory planning regulations and a desire to build the largest possible pavilion, led to the design of two differentiated zones: a large volume on a regular plan, as wide and high as possible, for the winemaking pavilion, and the remaining Z-shaped zone —the passage— where the spaces around the pavilion are gathered and employed, extending like an inner lane following the geometry of the stone wall which acts as a property boundary. This space, an extension of the site’s public zone, is the main entrance to the precinct, a circulation and reception space for visitors and wine tasting groups.

The interior is a big three-storey high space where the wine fermentation vats are located. This is the heart of the project, the space which really defines the winery. All the other spaces are articulated around it. It contains a large volume of fresh air, insulated by deep walls, up to 1.75 m. thick. The building is cooled by a system of load-bearing brick walls with multiple layers set between pilasters, generating pockets of circulating air between the walls.

On the ground floor, a series of chapel-like cavities follow the rhythm of the walls’ structural pilasters around the perimeter of the central space. They visually connect the building to the passage but also facilitate manoeuvring and storage for the machinery in the winemaking cellar. Looking upwards, the nave is dark and dense, while on the ground floor, it expands, opening to the light in the passage. This passage is where both grapes and visitors are received. Here there is a thermal transition into the cellar along the gentle slope that leads into the inner level of the building and the roadway at the rear as well, with several steps to resolve the height difference. This partly outdoor route follows a succession of roofs with different heights, combined with slabs which form broad landings between the steps. These slabs provide shelter from not only the rain but also from direct sunlight, creating a cool ambiance for the passage like a terraced garden where an outdoor tavern can be installed for wine sales, tastings, and snacks.

Rainwater builds up on the green roofs until it spills over from one to the next, descending ever more slowly as it flows through the passage, helping to freshen the atmosphere and water the vegetation along the way.

The most technologically demanding spaces —the barrel zone and the storeroom for bottled wine— need a perfectly stable moisture and temperature regime. For this reason, they are in the basement, in direct contact with the ground. The major challenge, however, is the vinification hall, with equally demanding thermal requirements that must be fulfilled without interaction with the ground. The first strategy is to generate the greatest possible interior height to facilitate the stratification of the warm air at the top, away from the barrels. Secondly, the hydro-thermal stability of the interior is aided by maximising the inertia of the building systems.

The third bioclimatic strategy is the roof, whose central part is a cooling device which employs radiation from the night sky to refrigerate the floor slab. A closed-circuit water cycling system runs between two levels: an upper level in contact with the outdoor environment, where water is used at night as a heat transfer fluid to dissipate the indoor ambient warmth, and a lower level in contact with the floor, where freshness is transferred to the interior. This large-scale exchange between the pavilion’s interior and the temperature of the universe through radiation is an inexhaustible refrigeration source. The street frontage is capped with tiles and clad with a thin layer of lime mortar which helps to contextualize the building in the village and to clearly differentiate its external materiality from the interior passage.

Viewed from outside, the building has a somewhat vernacular presence, but as one enters this corridor, the building systems become deconstructed and slowly explains the nature of the complex. 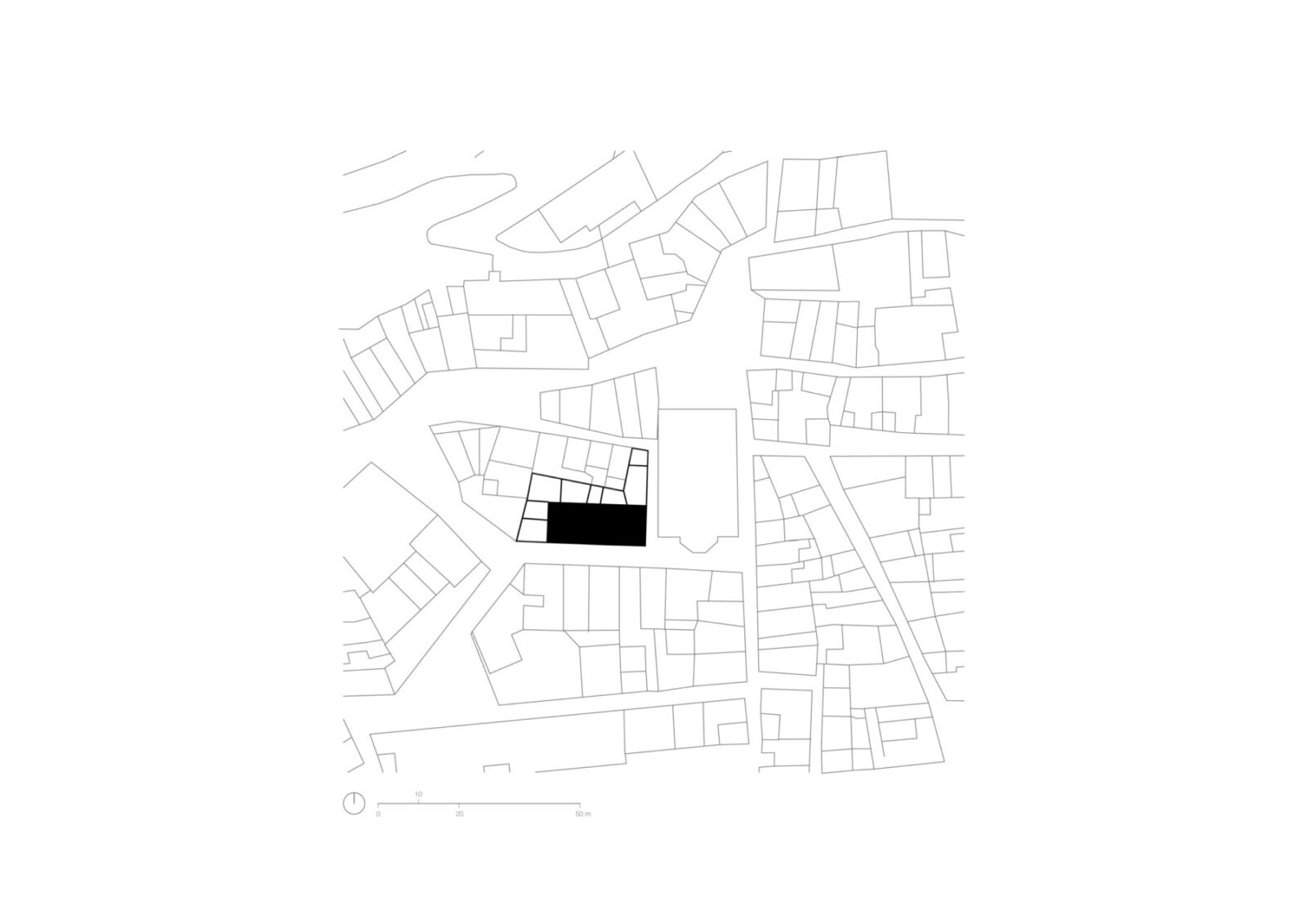 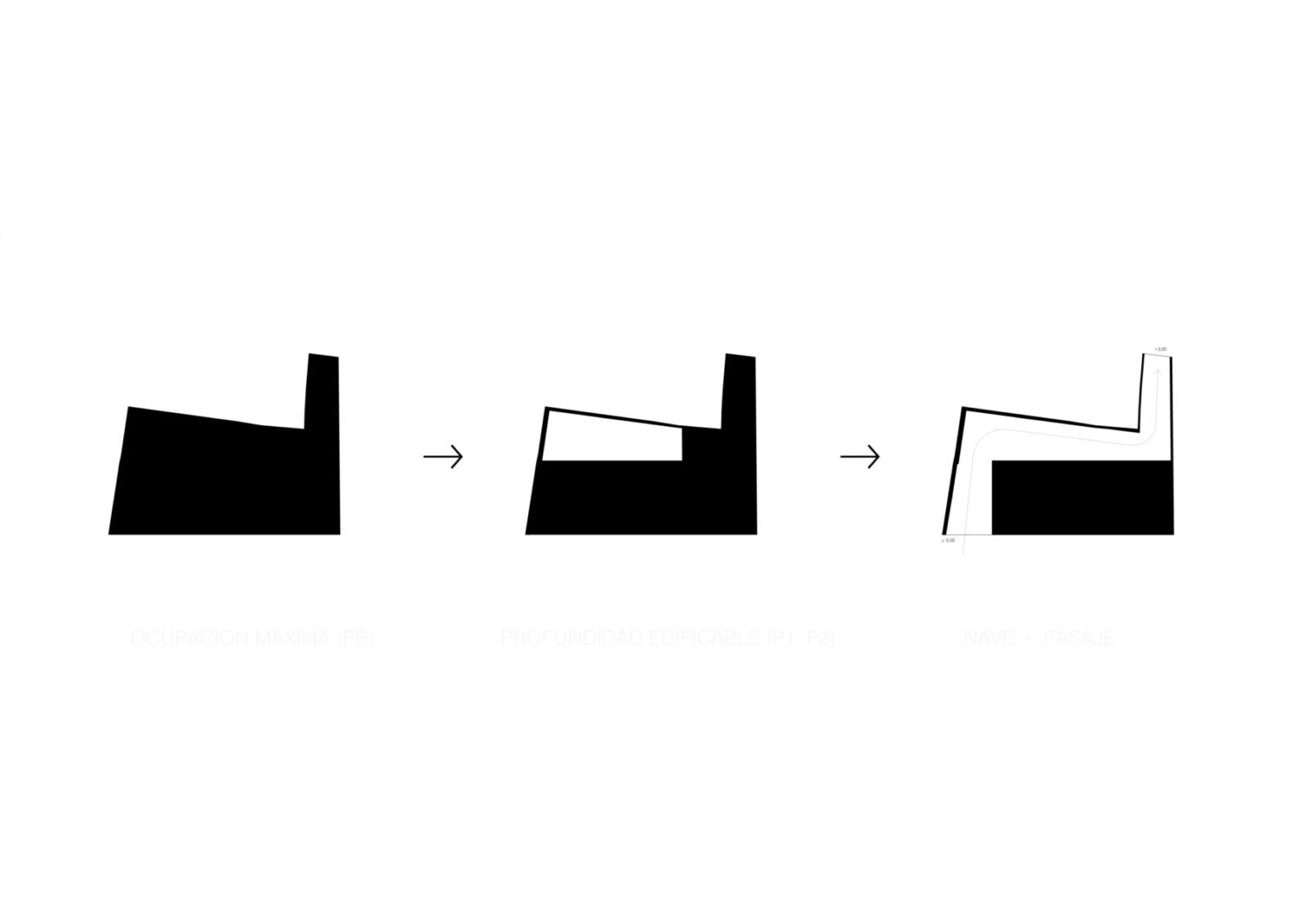 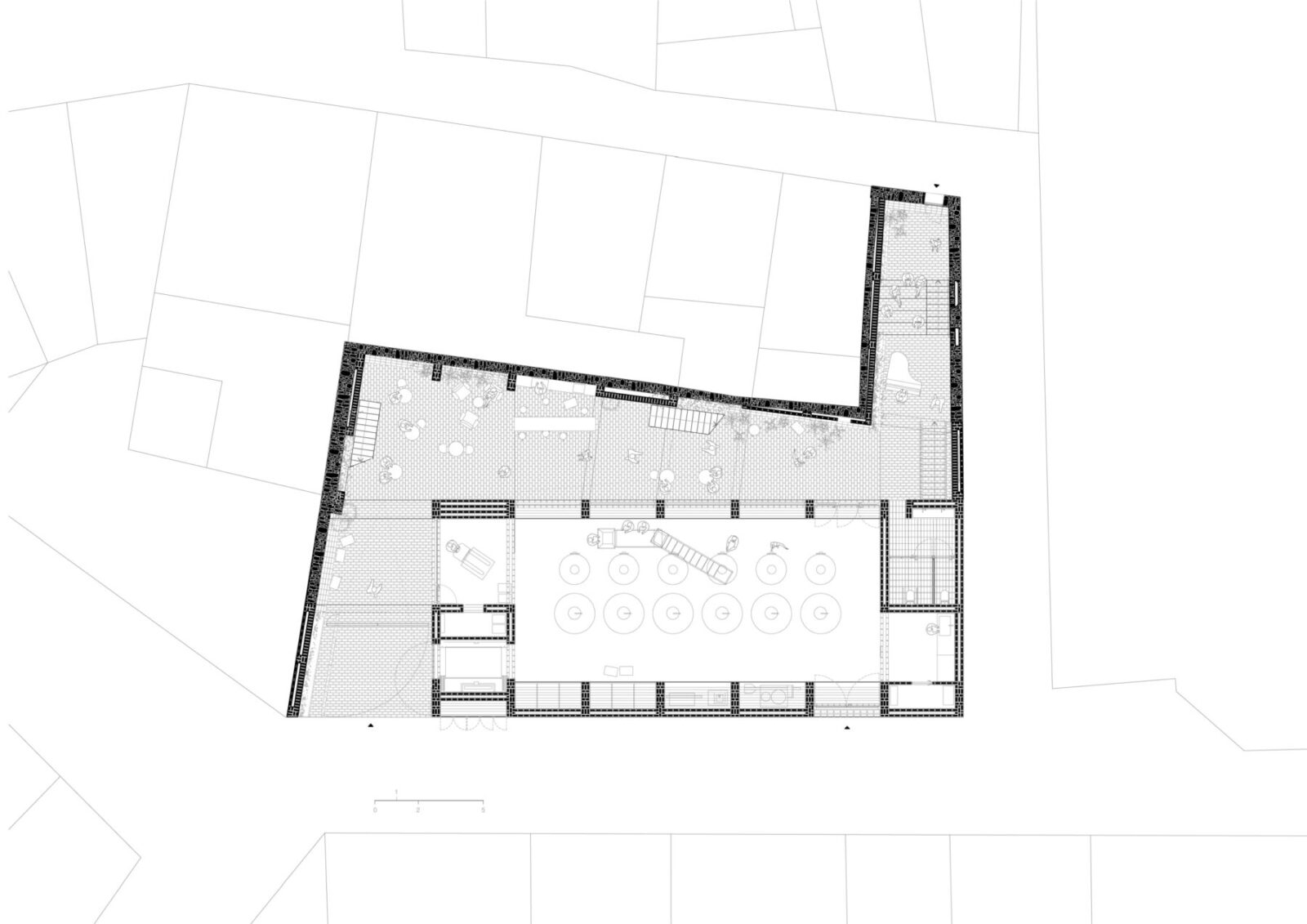 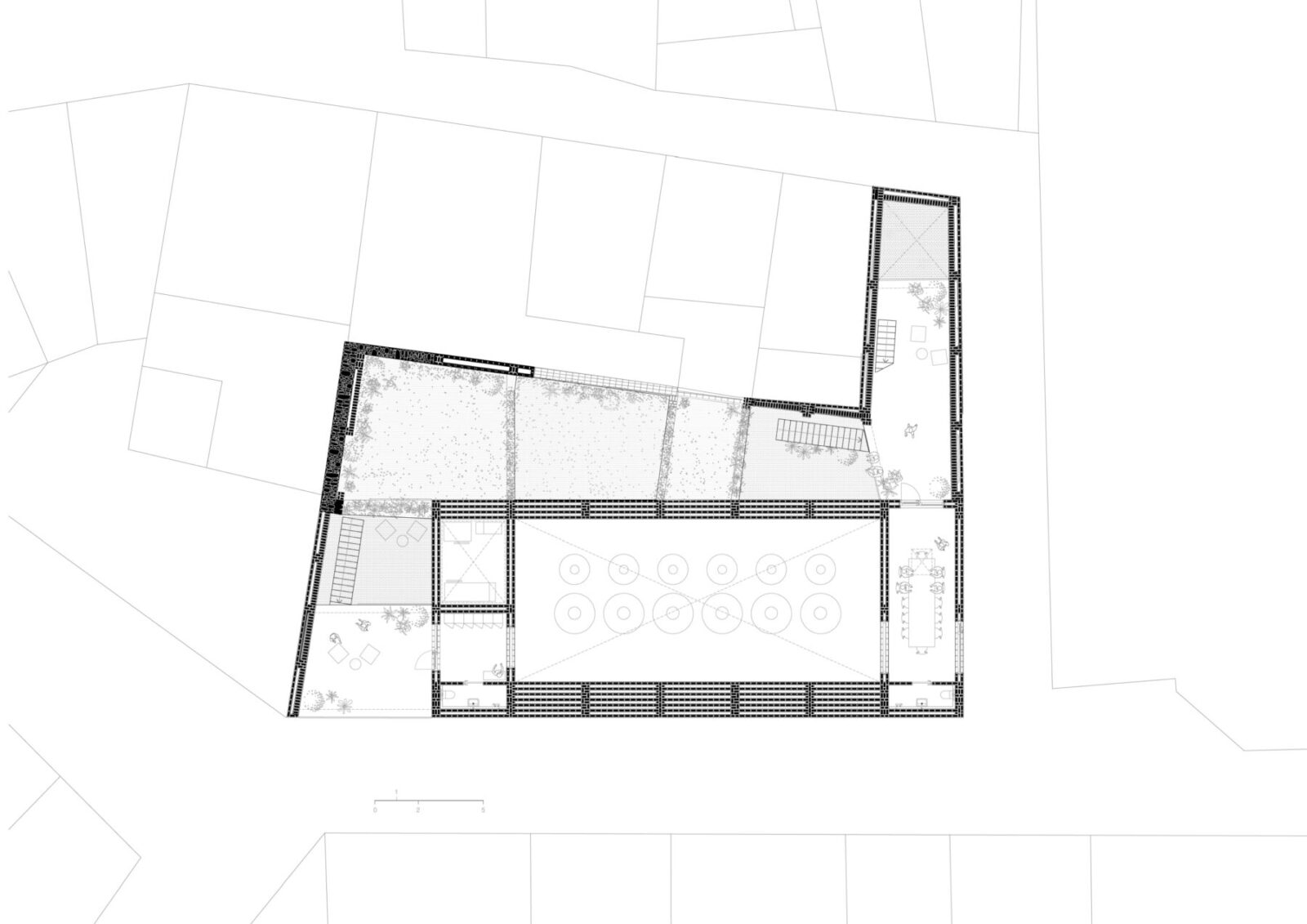 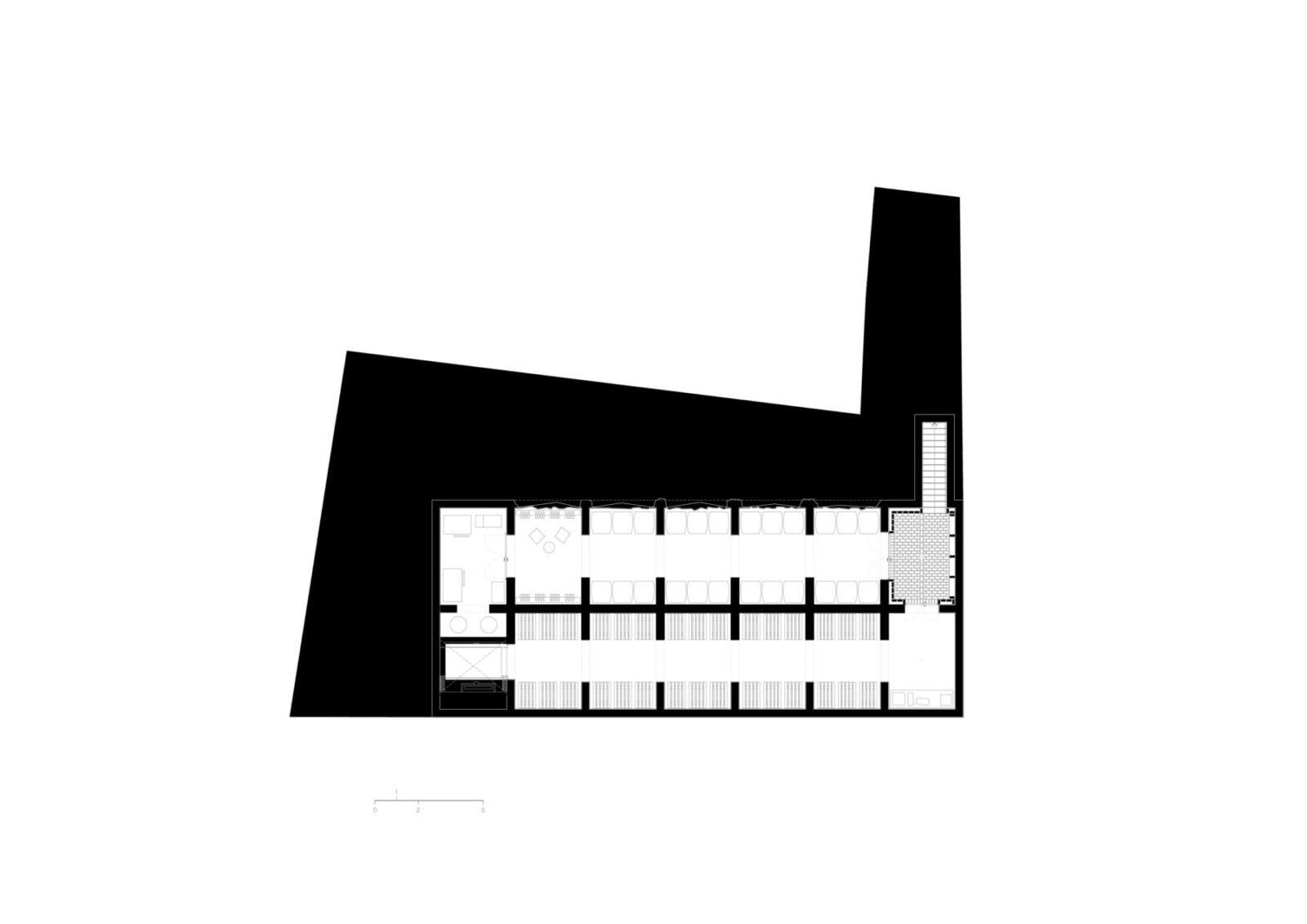 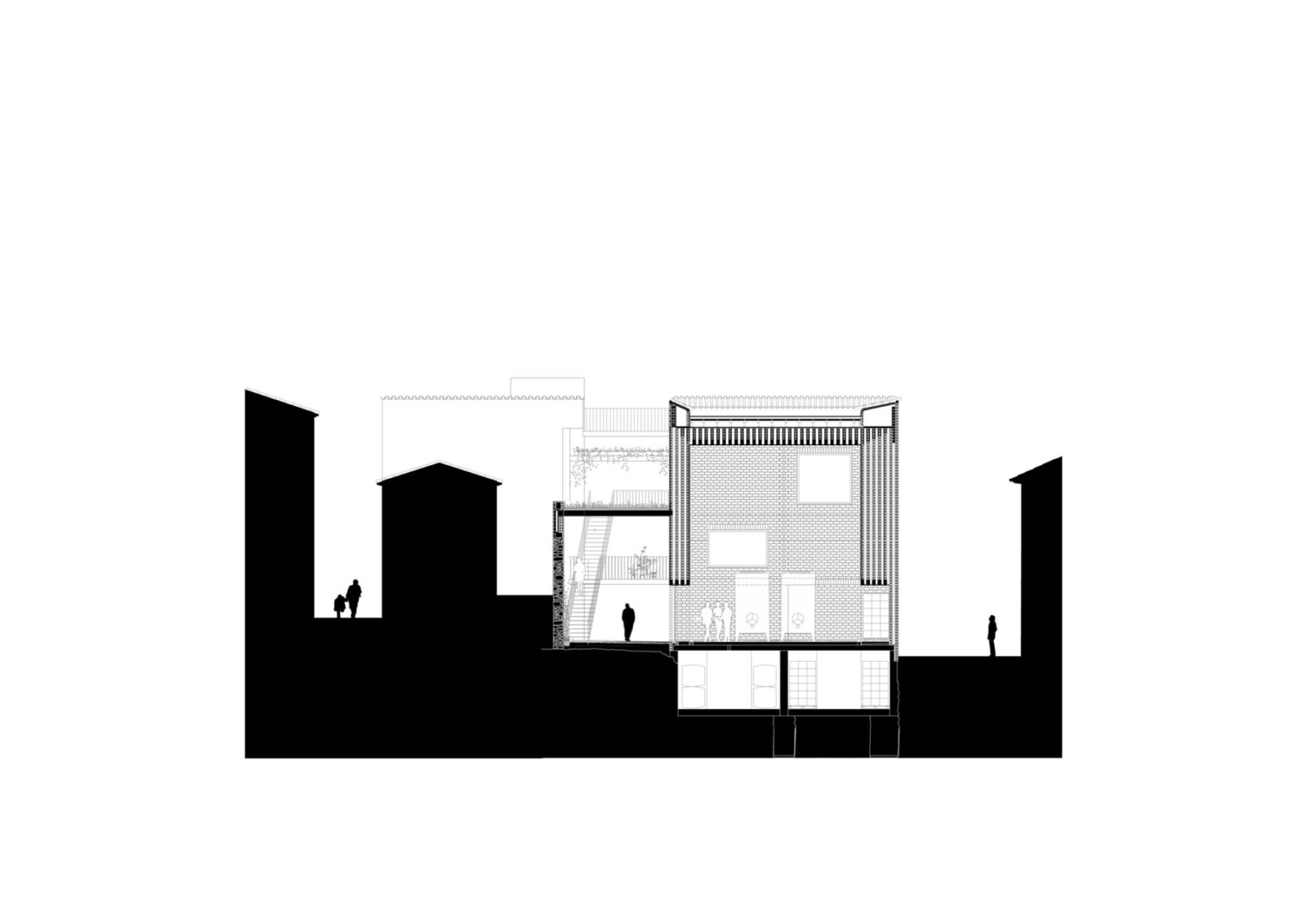 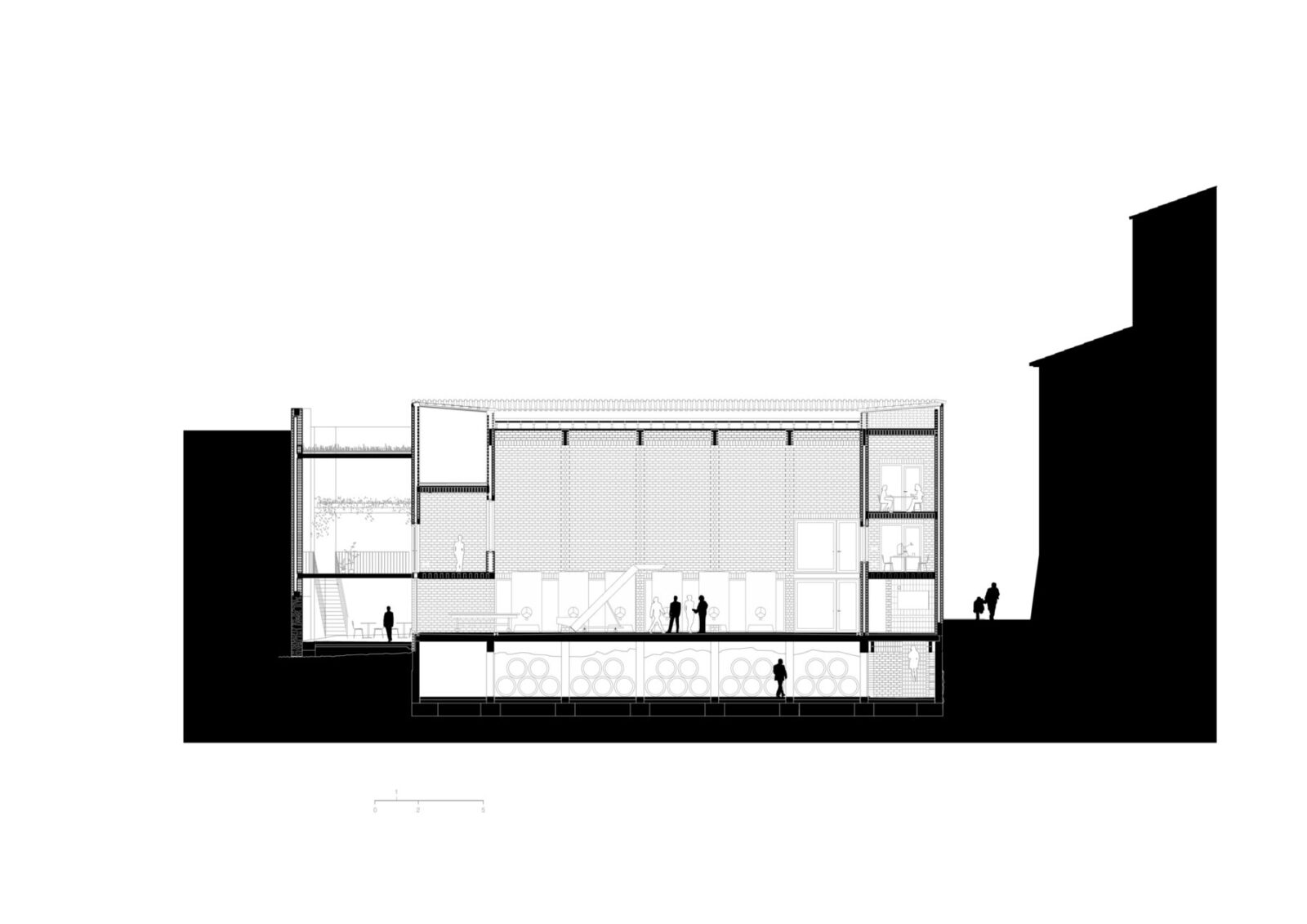 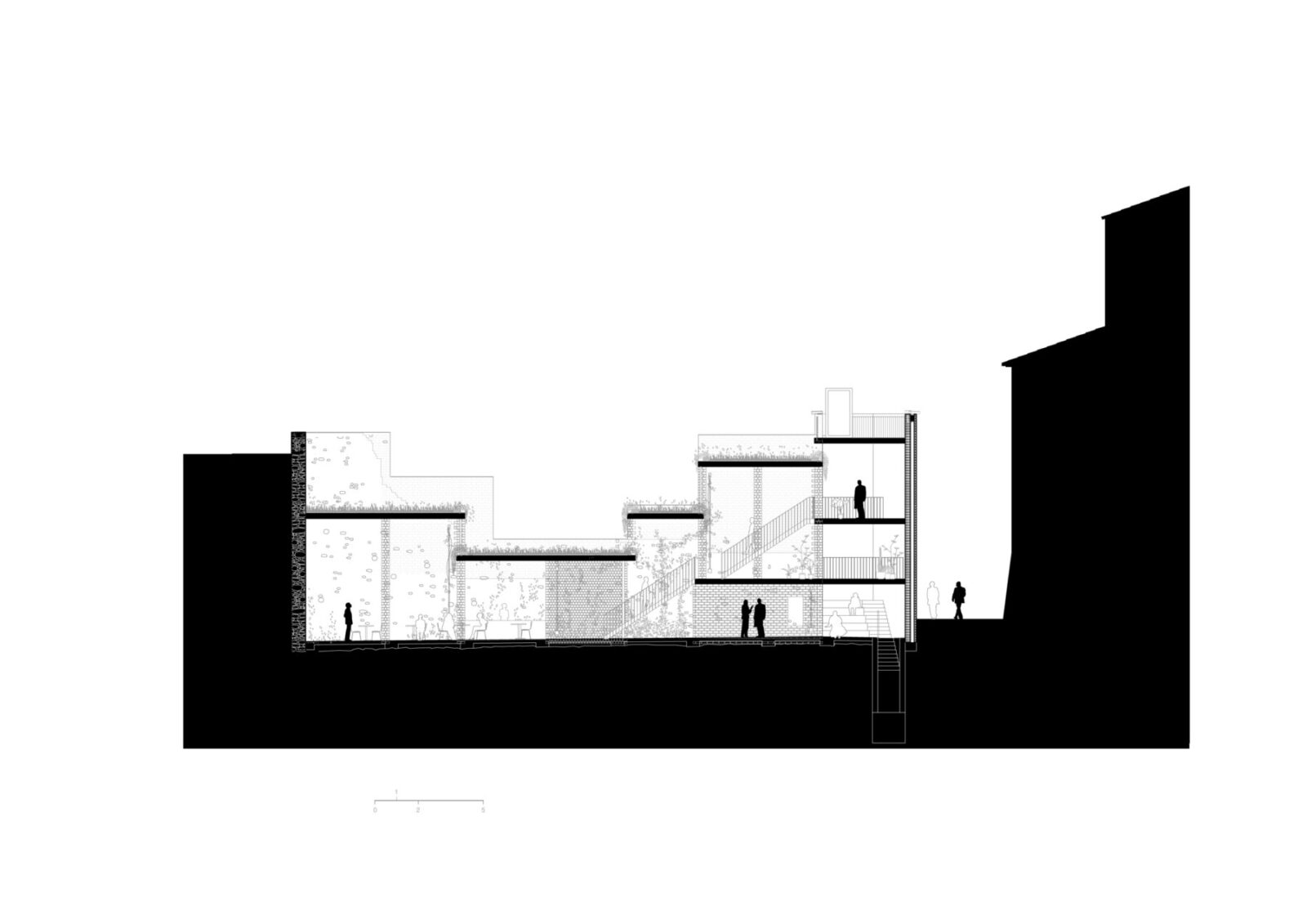 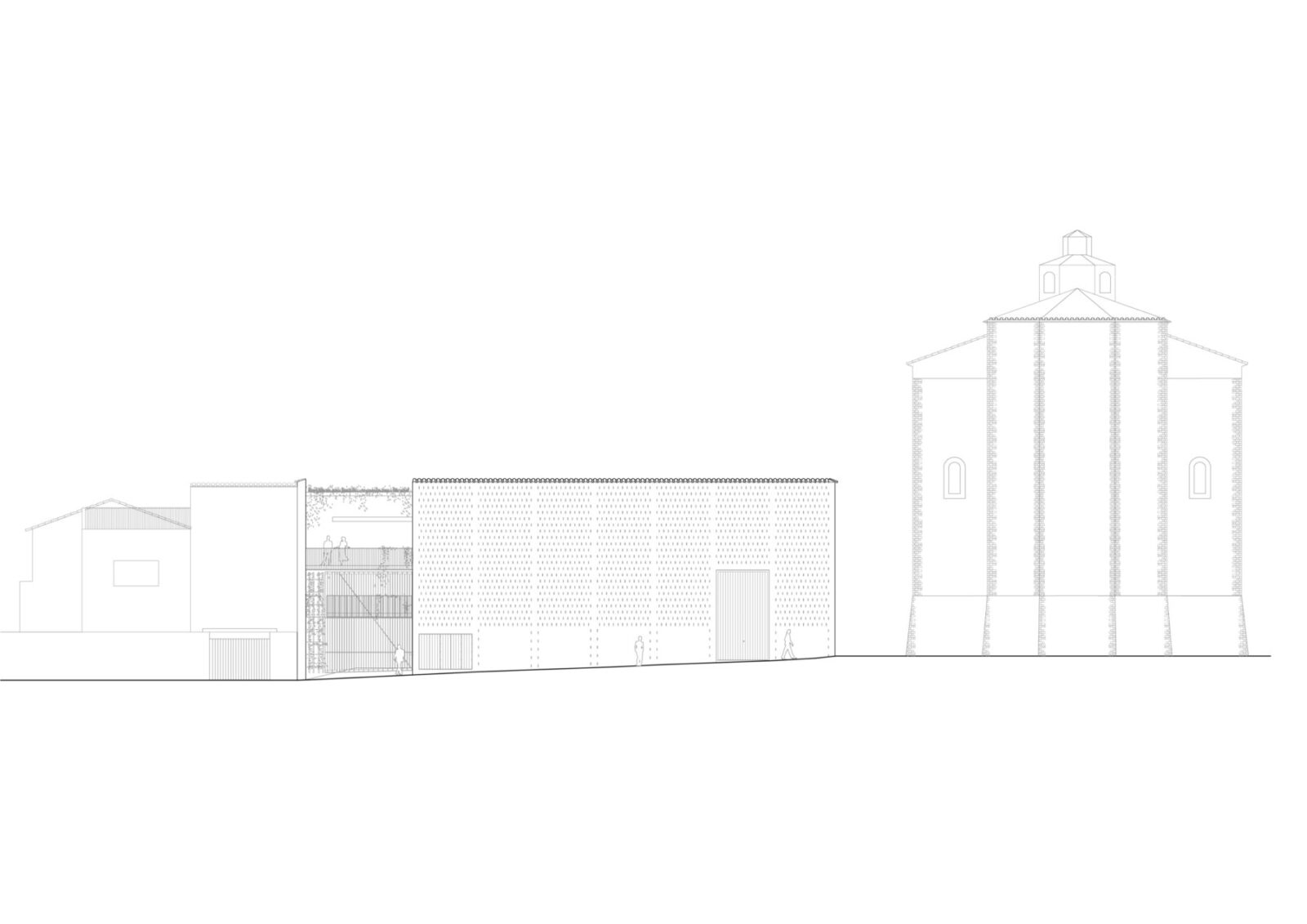 
Check out, also, House 905 in Barcelona, Spain by HARQUITECTES, here!