– text by the authors

No context is irrelevant to a new building. And often the site itself generates conditions affecting the project in almost every decision. This is not the case with this house. 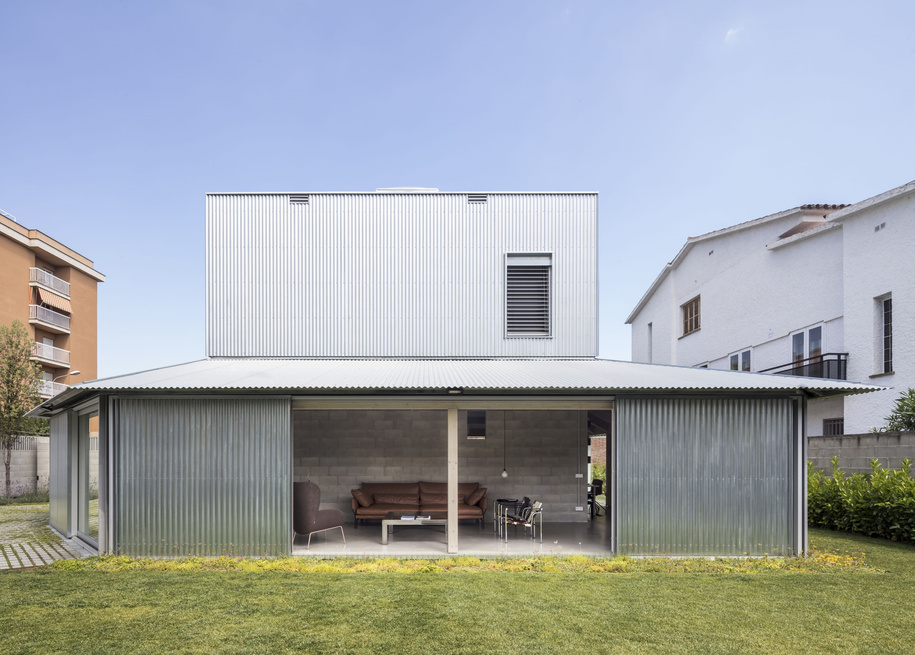 The sun, the geometry of the plot -almost square, with a chamfer-, a neighbour too close to the south, and a tower of houses to the north, more typical of a residential area of the sixties than of this piece of garden city where the plot is located. 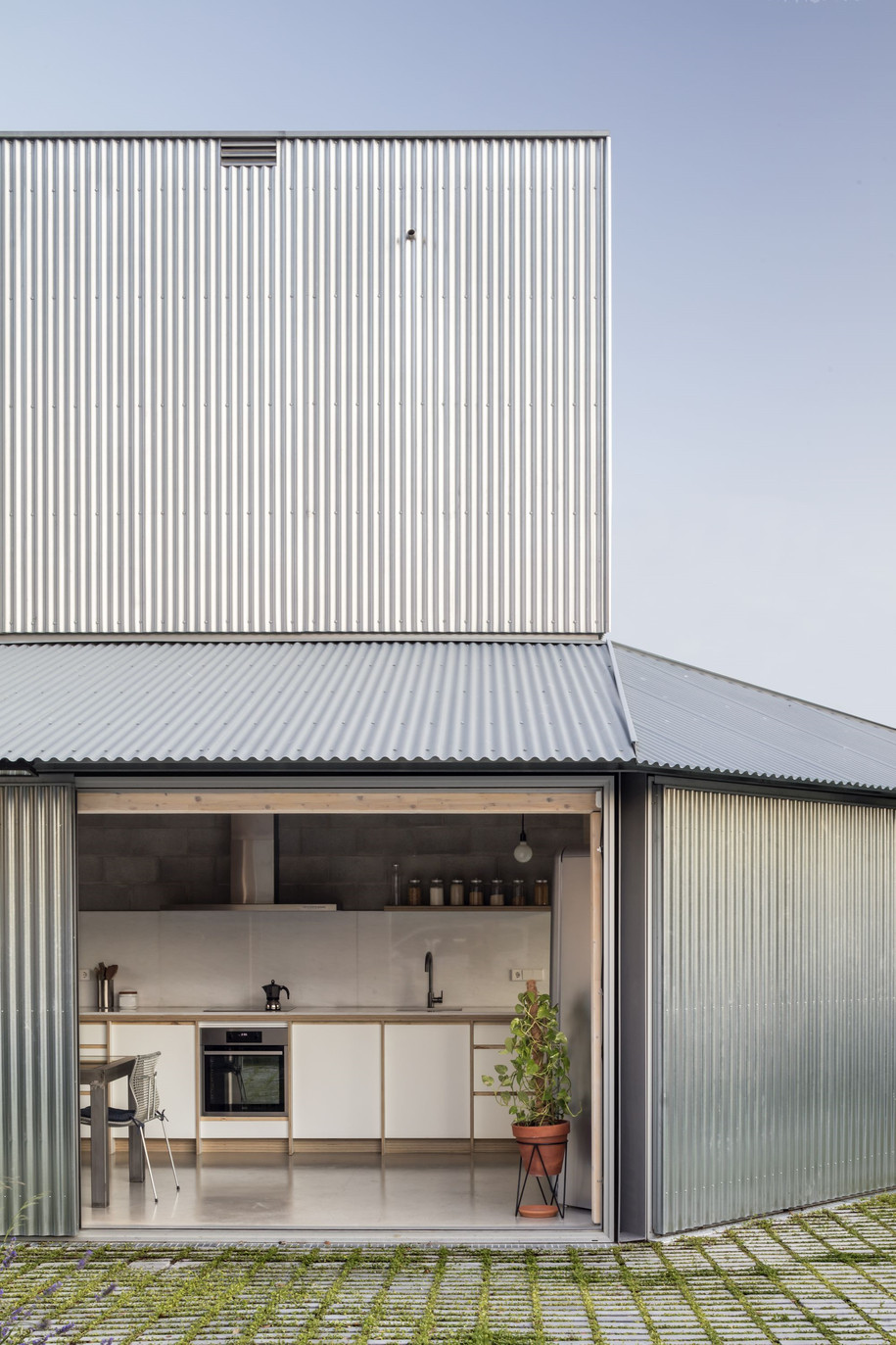 The owners -a couple with two children- wanted a house with few maintenance requirements, a lot of privacy and a good relationship with the garden -more like a courtyard- all year long, a well-placed studio. And a desire to live in a modern house -without a capital letter-. And a certain interest in contemporary Japanese domestic architecture. 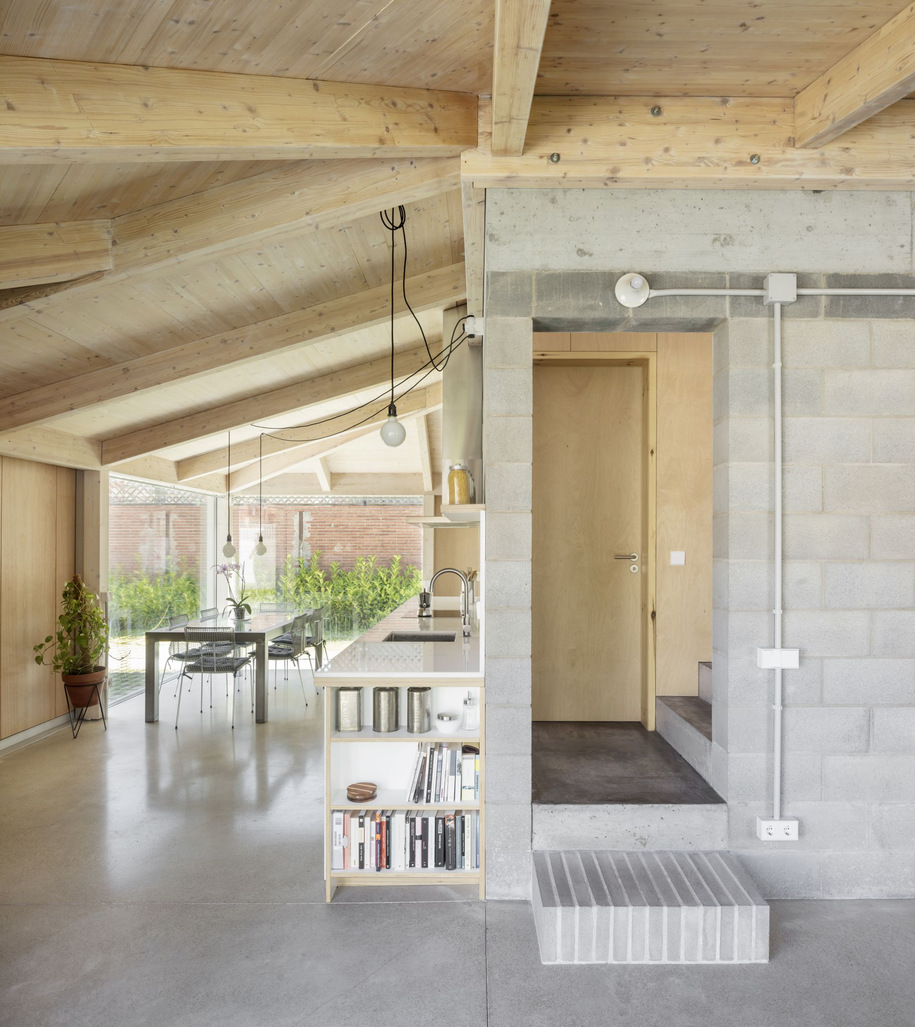 With these determining factors, it was clear to us that history had to be written almost from scratch, or rather from within, with the building itself. A new site had to be created. 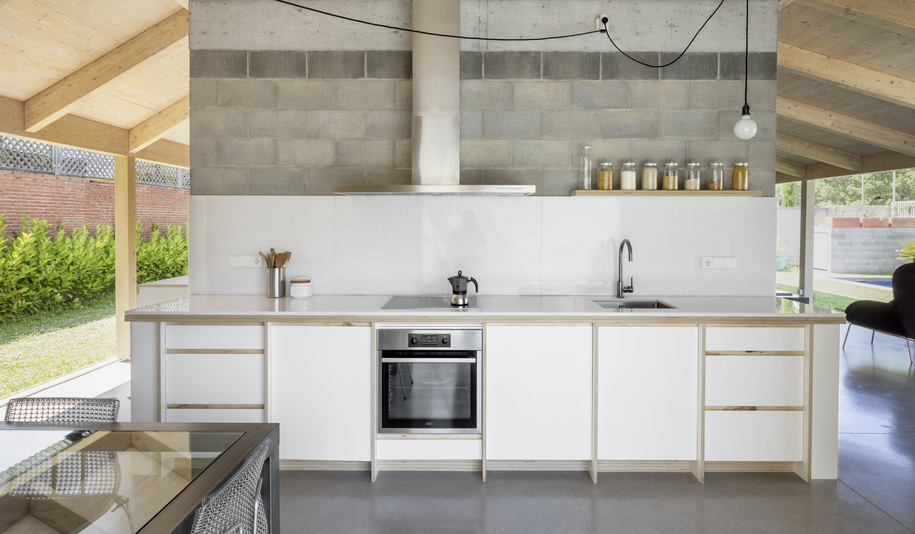 The plot was flat, slightly below street level. No trees. 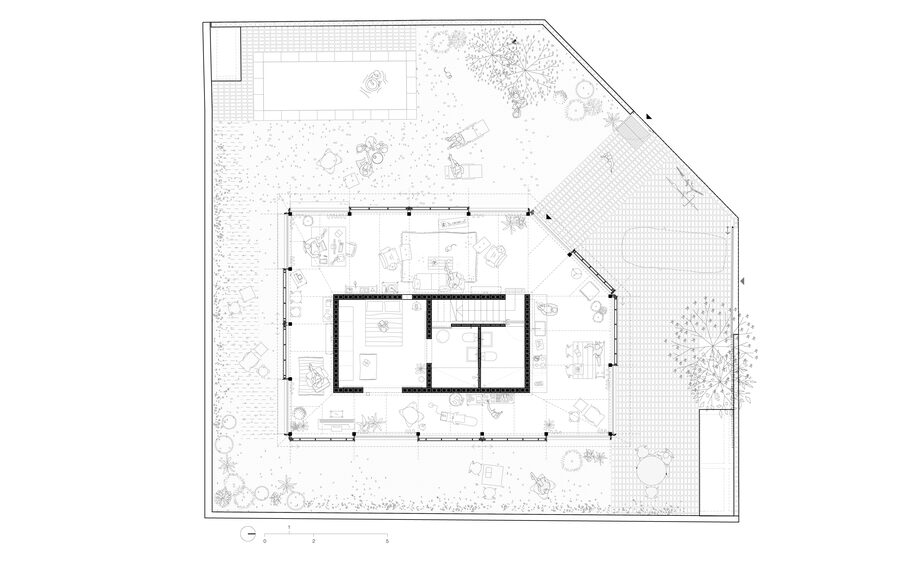 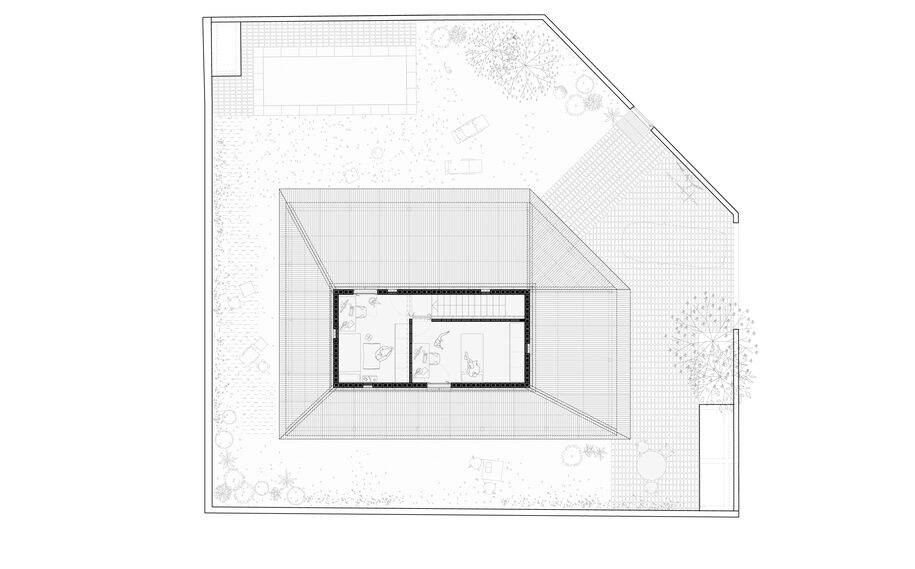 The first step was to build an opaque fence as high as possible, about two meters, and place the house off centred to the east, filling the 120m2 of maximum occupation and filling all the building limits except the west, where the sun comes in all year. There is where the perimeter garden becomes wider (7.6m), the rest has variable widths adapted to the regulations (3m to neighbours and between 5 and 6 to the streets) -the regulations force things that do not always make much sense-. 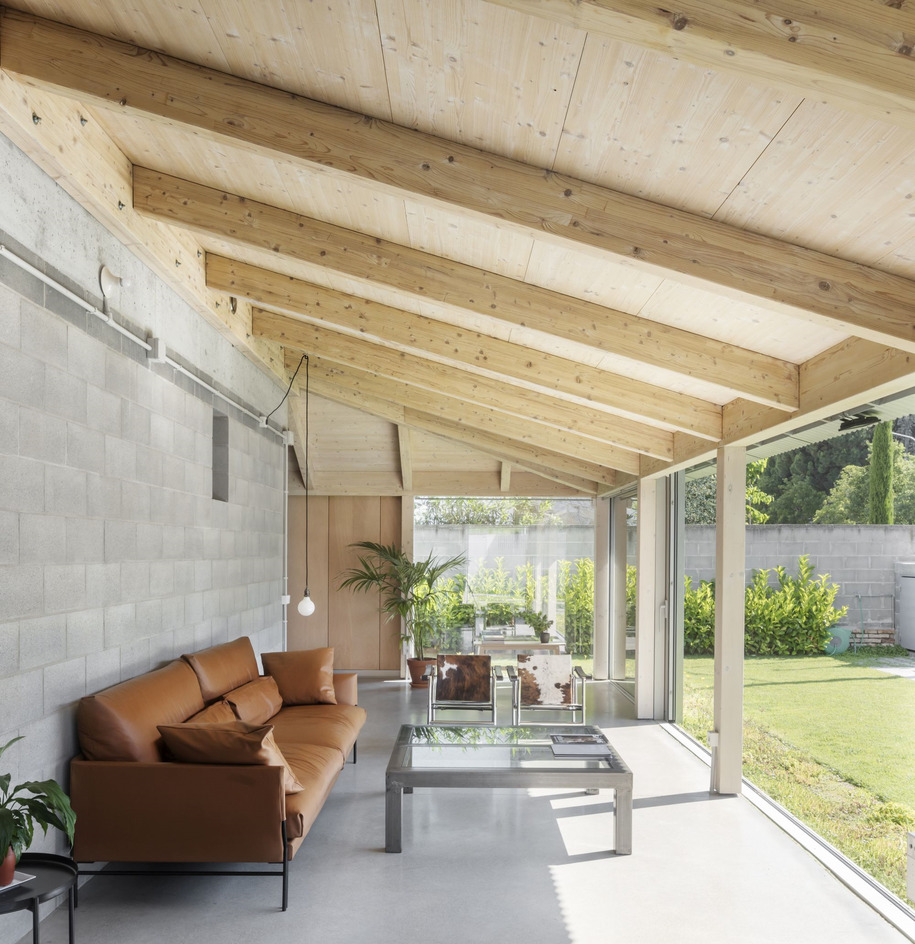 To the north we planted some evergreen trees that, with time, will deprive the view from the neighbouring tower of houses. 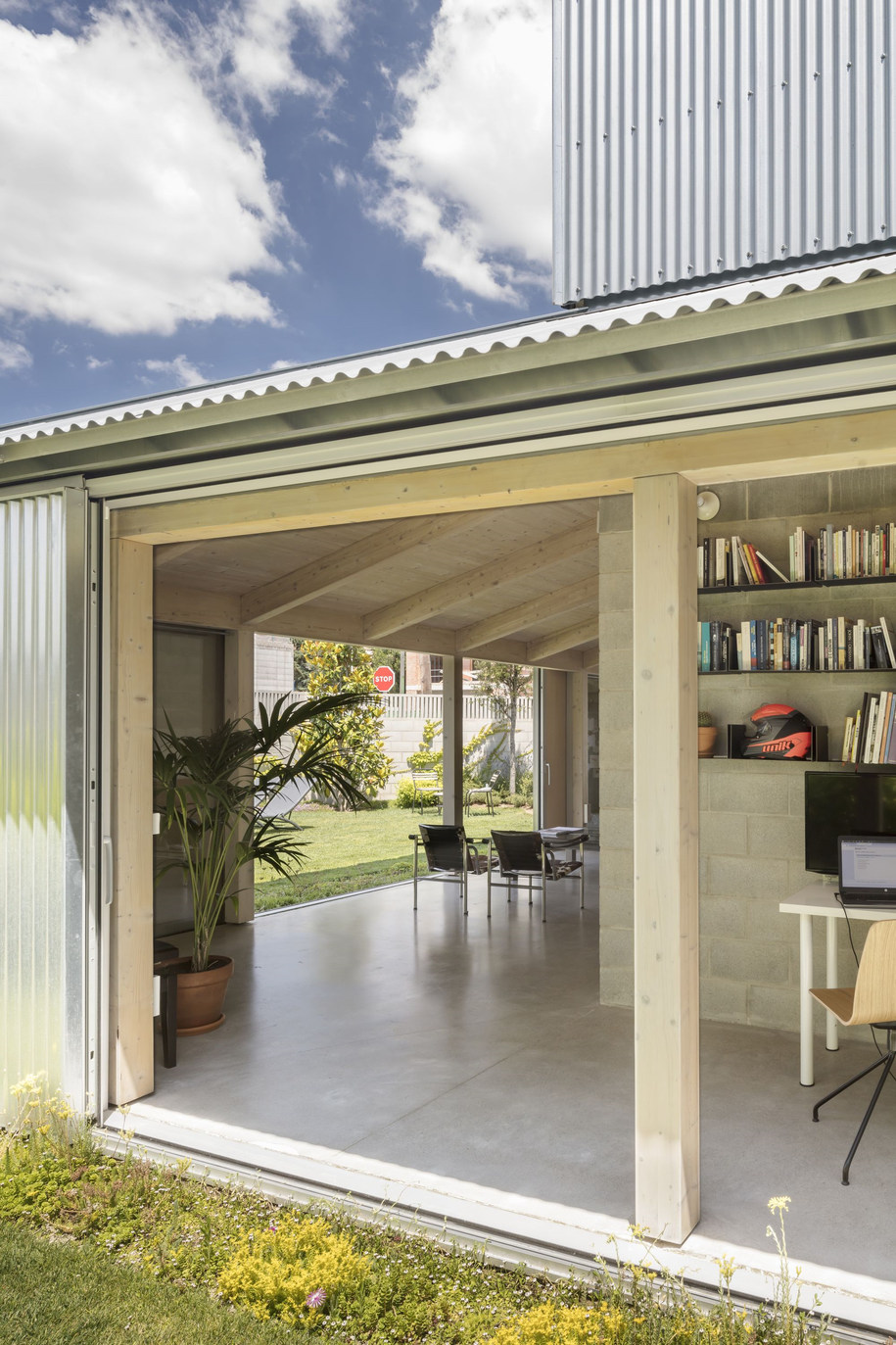 The new house is structured in four concentric layers parallel to the limits of the plot, like an onion. From outside to inside: the building fence, the perimeter courtyard and a continuous gallery that surrounds the central body, a two-storey concrete block box. 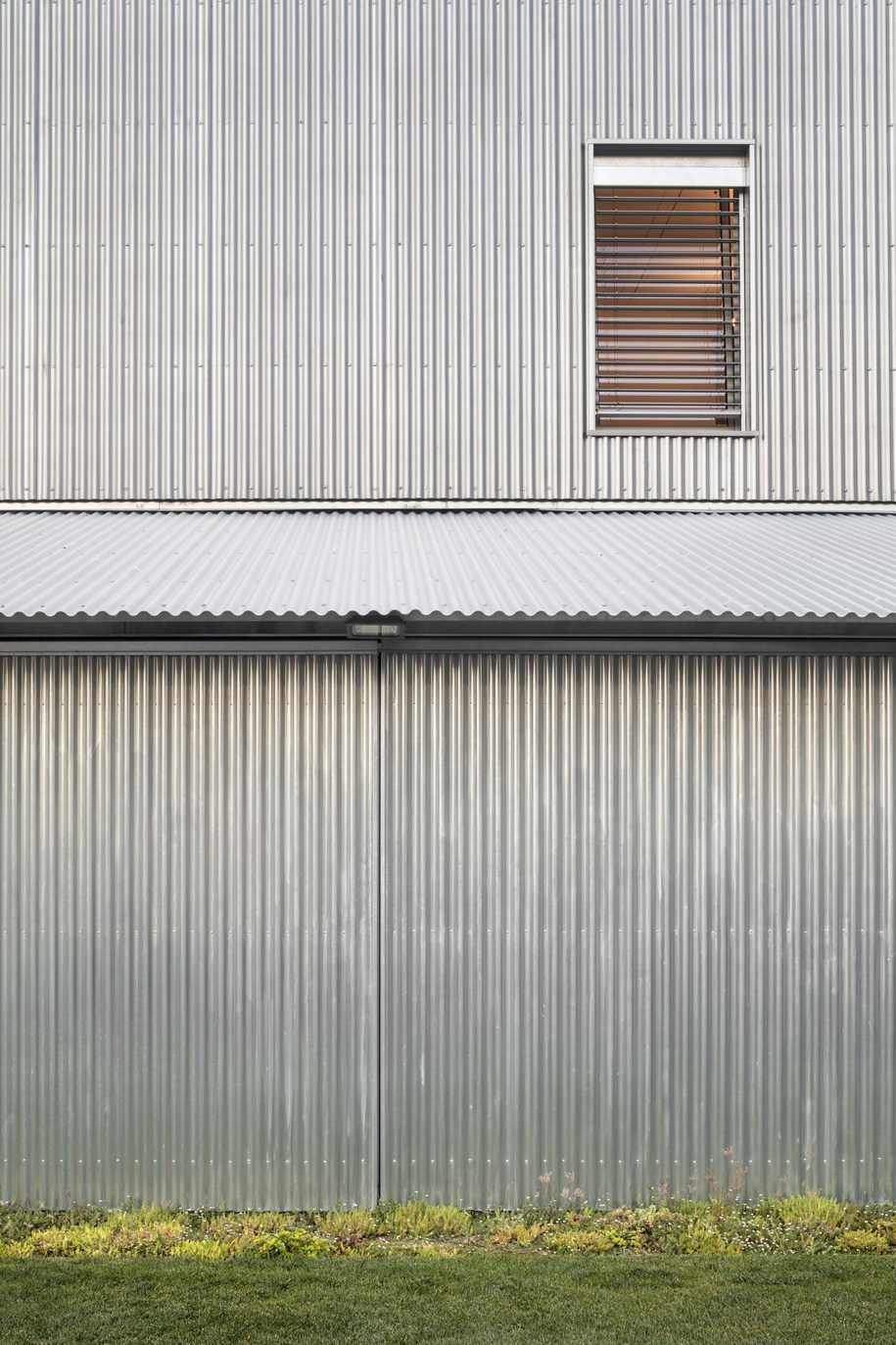 In the initial phases of the project, when the house was bigger, the perimeter gallery was an intermediate space, bio climatized, with complementary uses, and all the main pieces were housed in the core of the house. Later, due to budgetary adaptation, the surface was reduced and only the rooms, the bathrooms and the stairs were left in the central body. The common areas were moved to the gallery. 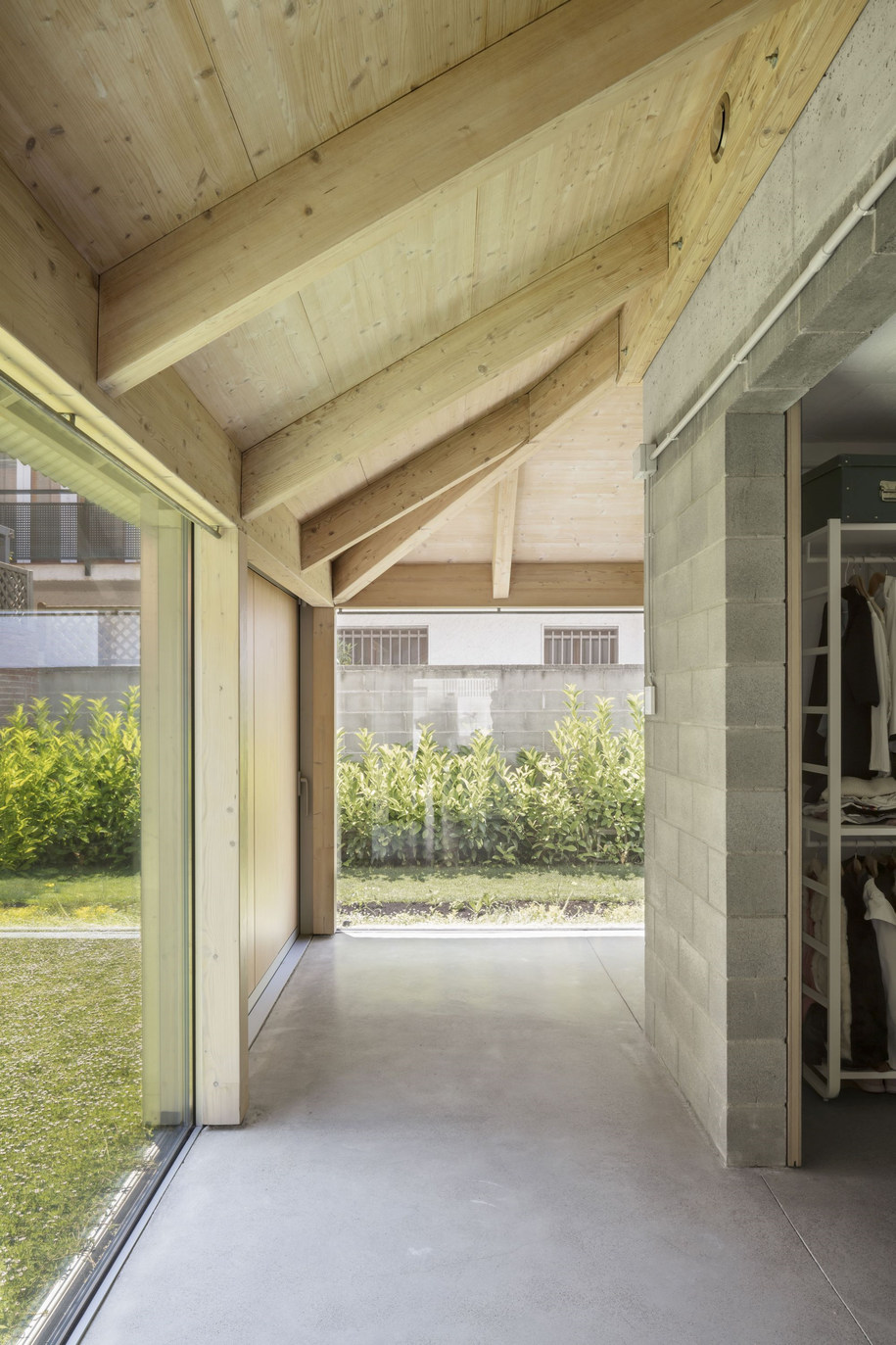 Almost everything happens in the gallery. It is a veranda, with certain resonances to Charles Moore’s Orinda house, which proposes intense and variable relations (seasonally) with the patio; in summer, through the large sliding walls it becomes a porch; in winter, large windows in the corners offer framed views of the garden and capture solar radiation to the west. Contrary to what is usual, in this house the windows are fixed, and the mobile doors are opaque, a condition that constantly transforms the facade and the gallery, depending on what is open and what is closed. 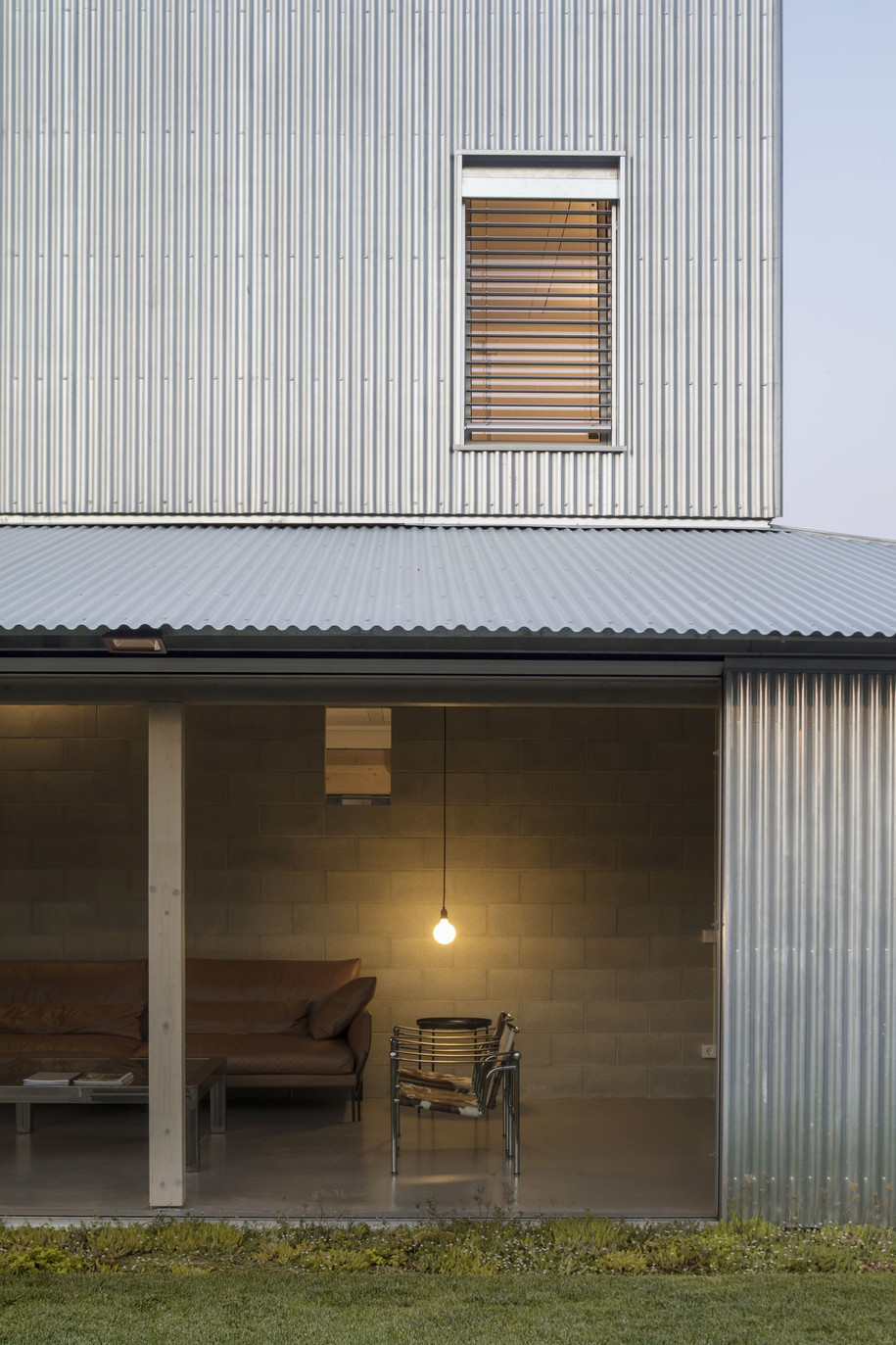 As in the chapel of Santa María dos Anjos by Lina Bo Bardi, the veranda, with its sloping roof, is built with light and dry systems: wooden structure (pillars, beams, and roof) and glass, aluminium, wood and corrugated galvanized sheet enclosures. In contrast to the lightness of the gallery, the central core is massive and compact, with more thermal inertia. The block walls and slabs are left visible in the gallery and painted white in the rooms. 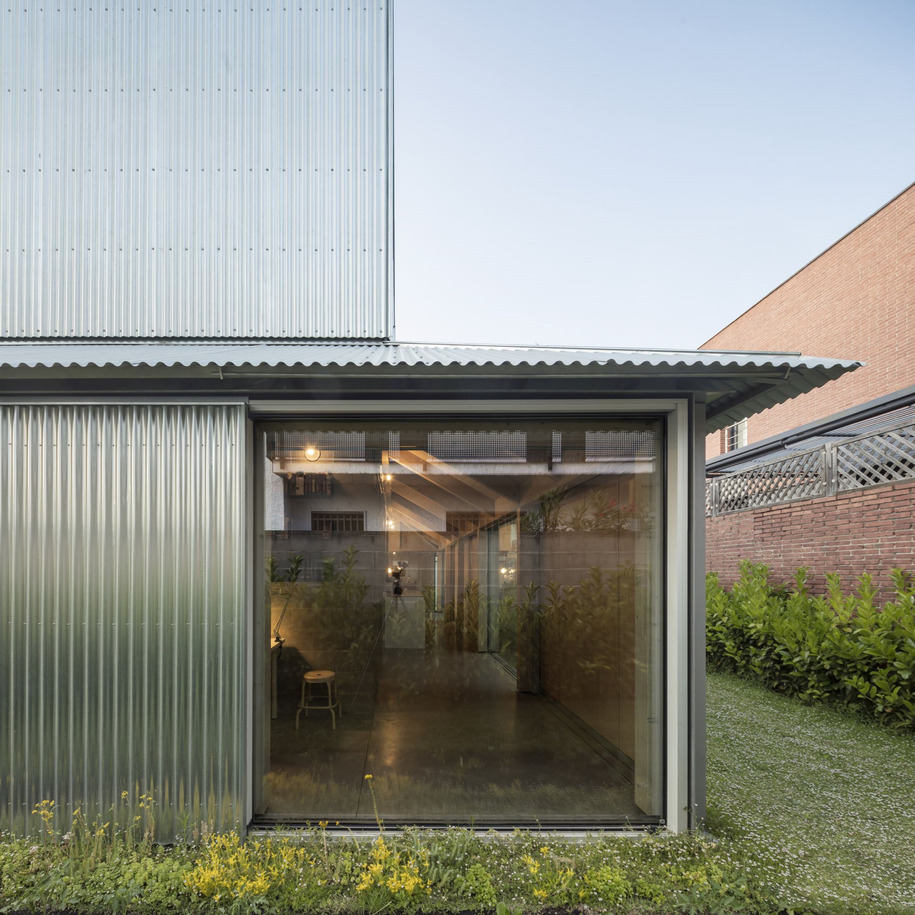 In winter, the veranda shelters and heats the entire central body (bathrooms and bedrooms), which does not have its own climate system (on the ground floor); the concrete floor, with a lot of inertia, apart from receiving direct solar radiation on time, is heated via underfloor heating, as are the rooms on the second floor; generation is by aerothermal heat pump. 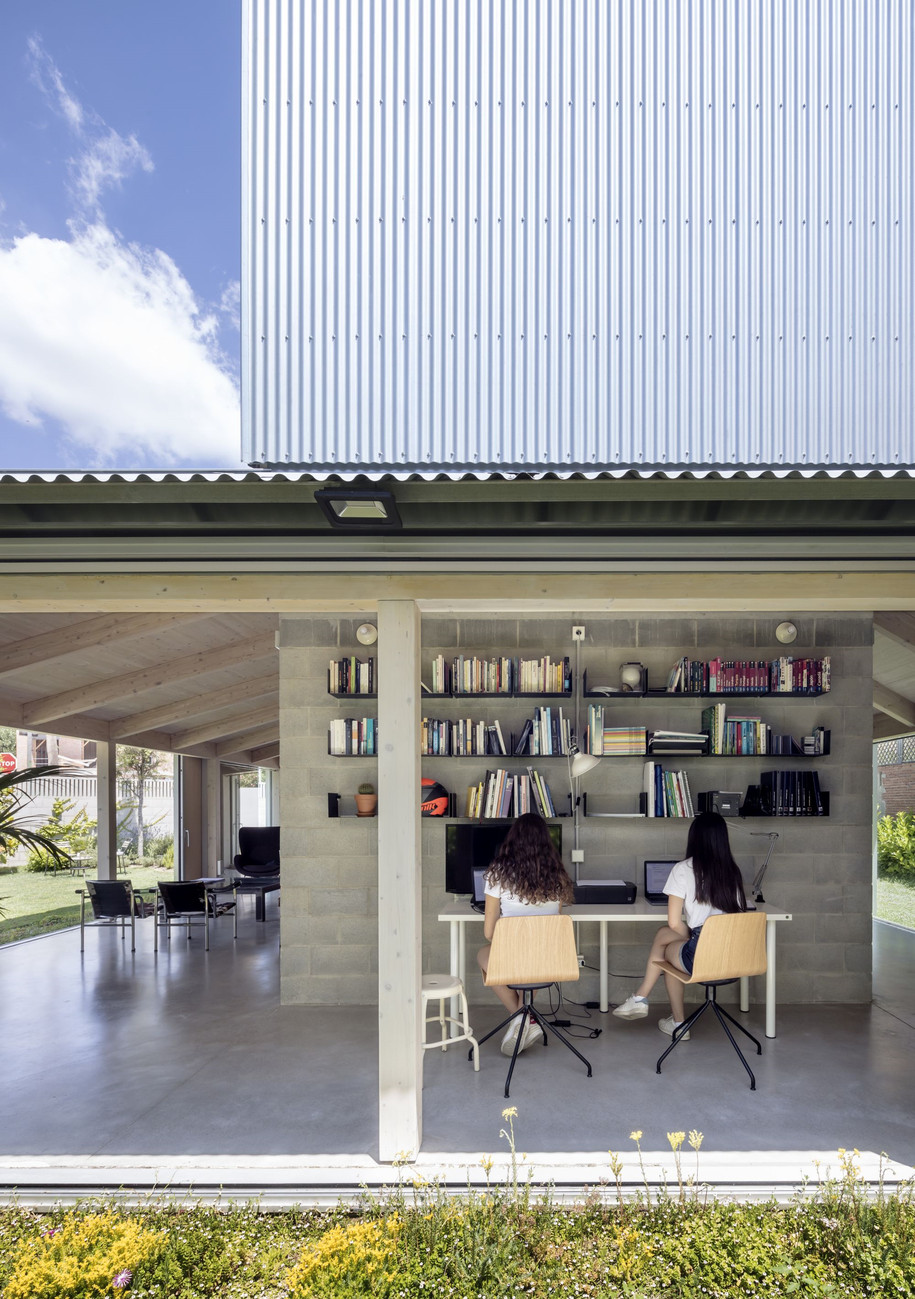 In summer, when the sliding doors are closed, the windows are protected from the sun by the overhang of the roof and by reflective exterior curtains. At the same time, the inclination of the roof favours, by stratification, a passive ventilation system that evacuates the hot air through four ducts hidden in the facades that work as small solar chimneys, favouring the natural renovation and facilitating the cooling of the veranda. 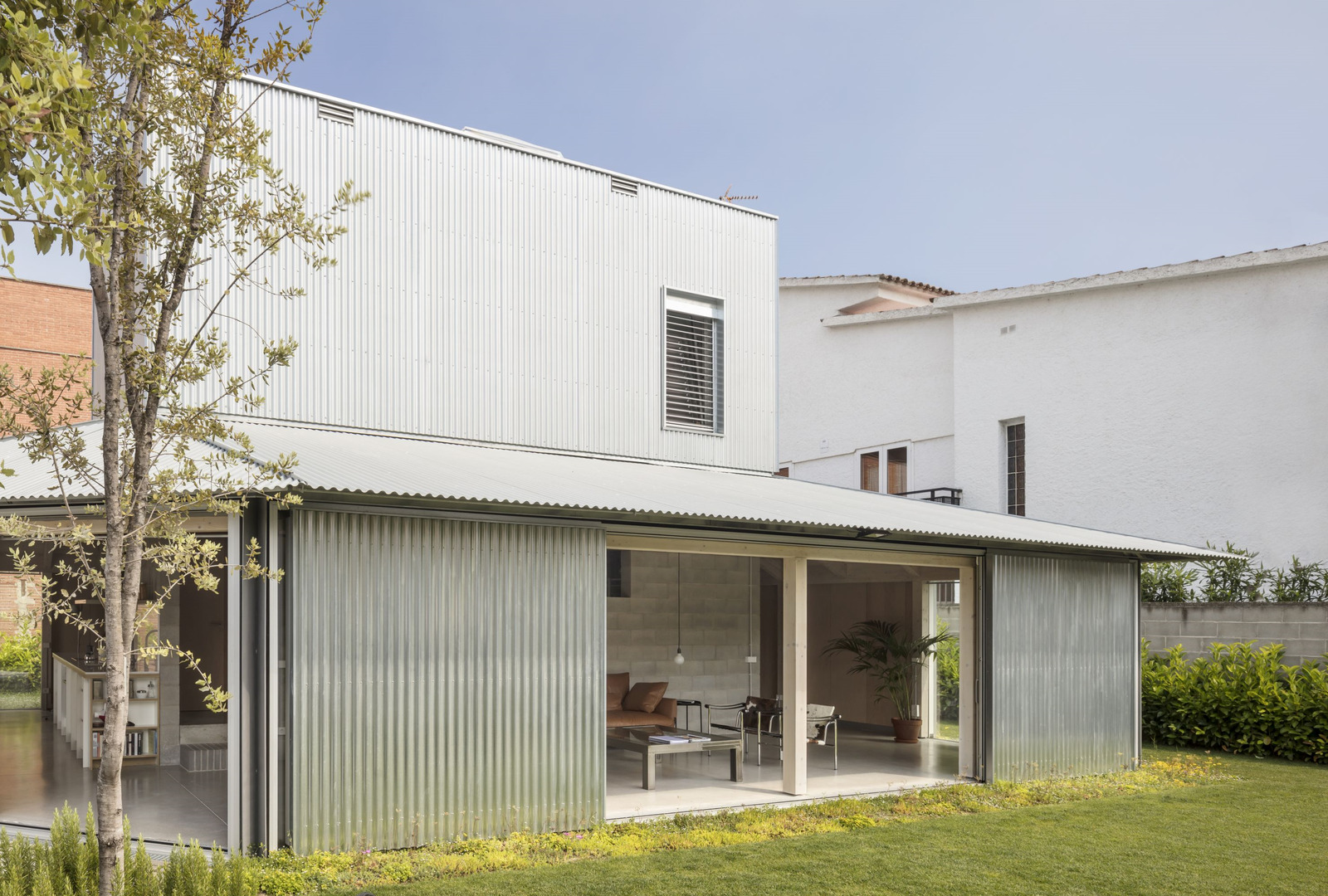 Ten years after the first meeting with the clients, and with a long and intense history in between, house 905 was completed. The long time was another determining tool in the process of the project. 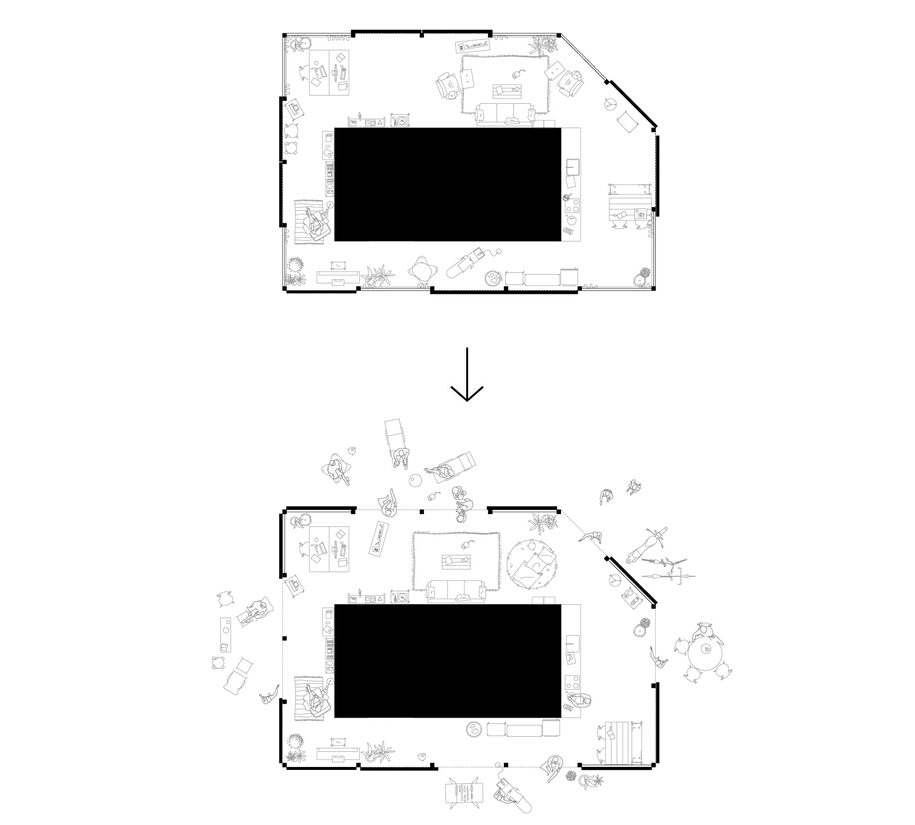