TERRACE FOR THE ACROPOLIS

This project highlights the stability and importance of historical legacy. Among Acropolis monuments, Attica light, white marbles, contemporary buildings and busy but cheerful citizens, this new building aims to become an additional cultural center that combines both Athens’ millenary history and its cosmopolitan and modern lifestyle. Thus, Acropolis rock and especially the Parthenon temple are likely to play a crucial factor throughout the Terrace’s design process. 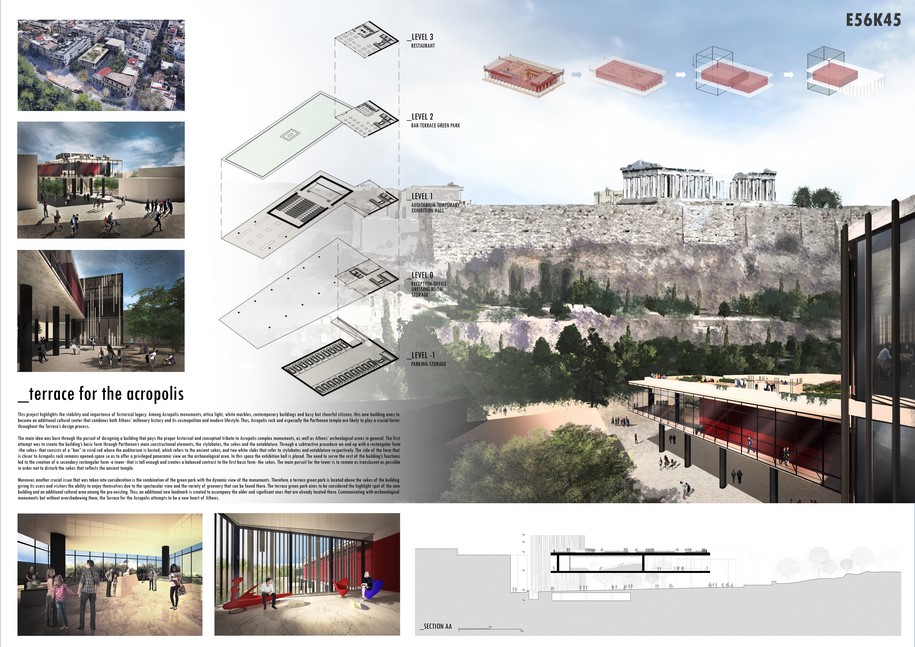 The main idea was born through the pursuit of designing a building that pays the proper historical and conceptual tribute to Acropolis complex monuments, as well as Athens’ archeological areas in general.

Focusing on Parthenon’s architectural structure we describe it as a peripteral octastyle doric temple with ionic architectural features. The whole temple was constructed from pentelic marble, except its wooden cypress structure that held the roof.  The Parthenon typically has a rectangular plan which stands on a platform or stylobates of three steps. It is of lintel construction and is surrounded by peripteral columns carrying an entablature. There are eight columns at either end and seventeen on the sides. There is a double row of columns at either end. The colonnade surrounds an inner masonry structure, the sekos (cella), which is divided into two compartments. At either end of the building the gable is finished with a triangular pediment originally occupied by sculpted figures. The columns are of the doric order, with simple capitals, fluted shafts and no bases. Above the architrave of the entablature is a frieze of carved pictorial panels, called metopes, separated by formal architectural triglyphs, typical of the Doric order. Around the sekos and across the lintels of the inner columns runs a continuous sculptured frieze in low relief. This element of the architecture is ionic in style rather than doric.

The Parthenon is regarded as the finest example of Hellenic architecture. For the majority of people it is considered as the symbol of west civilization. Despite that fact, it is not widely known that ancient Hellenes used to colour their temples and Acropolis monuments were no exception. In short, it is claimed that the main sekos had a vivid red colour, triglyphs and pediments’ tympanum had dark cyan colour and other structure pieces such as sculptures, mutules, sima and geison were always coloured. Columns fluting, the architrave, the stylobates and cornices’ facades remained unpainted.

The first attempt was to create the building’s basic form through Parthenon’s main constructional elements, the stylobates, the sekos and the entablature. Through a subtractive procedure we end up with a rectangular form -the sekos- that consists of a “box” in vivid red where the auditorium is hosted, which refers to the ancient sekos, and two white slabs that refer to stylobates and entablature respectively. The side of the form that is closer to Acropolis rock remains opened-space so as to offer a privileged panoramic view on the archaeological area. In this space the exhibition hall is placed. The need to serve the rest of the building’s functions led to the creation of a secondary rectangular form -a tower- that is tall enough and creates a balanced contrast to the first basic form -the sekos. The main pursuit for the tower is to remain as translucent as possible in order not to disturb the sekos that reflects the ancient temple. 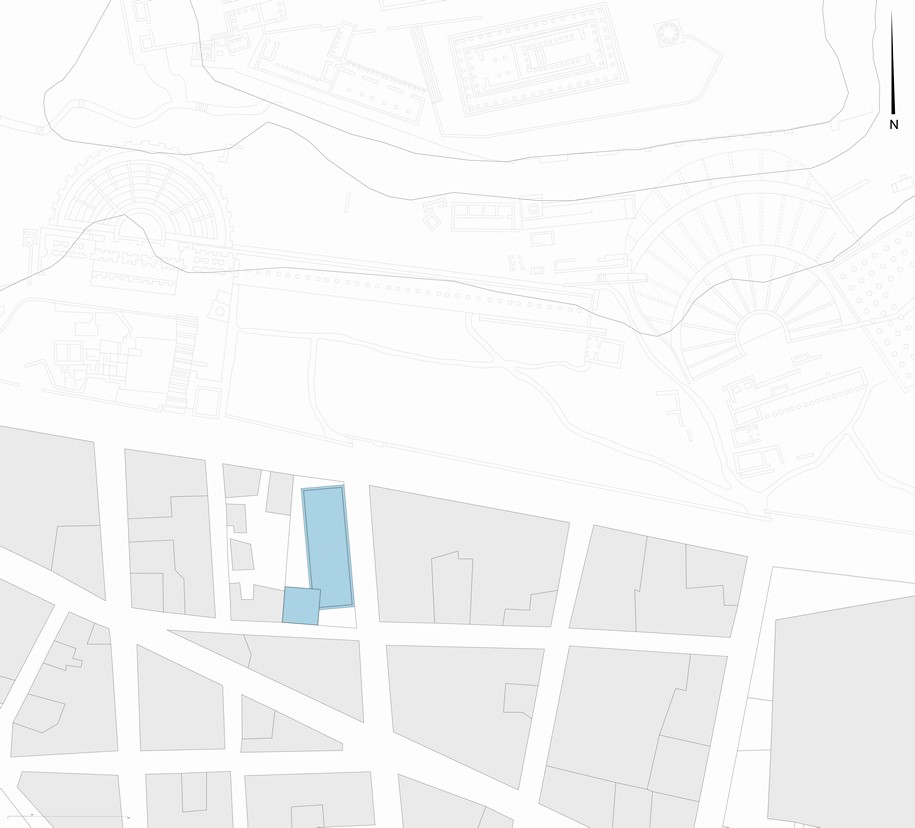 Moreover, another crucial issue that was taken into consideration is the combination of the green park with the dynamic view of the monuments. Therefore, a terrace green park is located above the sekos of the building giving its users and visitors the ability to enjoy themselves due to the spectacular view and the variety of greenery that can be found there. The terrace green park aims to be considered the highlight spot of the new building and an additional cultural area among the pre-existing.

Thus, an additional new landmark is created to accompany the older and significant ones that are already located there. As the famous Architect Le Corbusier stated; “the Parthenon, this terrible machine, turns everything within a radius of three miles to dust”. Consequently, the new building’s relevance to the Parthenon Temple is considered to be vital. Communicating with archaeological monuments but without overshadowing them, the Terrace for the Acropolis attempts to be a new heart of Athens.

The design of the building aims to create a new point of view on the archaeological area through the construction of its terrace. It is a composition of two separated solids, the sekos and the tower, that are connected on the first floor (1L). The eighteen metre glass tower is developed over four levels. In the basic rectangular form, the sekos (cella) is divided in two areas and “floats” six metres above the ground.

The approach to the entrance is through the pilotis that is in conjunction with Dionysiou Areopagitou Street and Kallisperi Street. The ground floor (0L) contains functions such as a reception, offices and a dressing room for the staff. On the first floor (1L) there is a lobby that is used as a waiting-relaxation room and is a “bridge” that leads to the sekos where the temporary exhibition hall and the auditorium are hosted. The whole space appears to float above the ground creating an uninterrupted impressive view of the surroundings which is not hinder by the neighboring apartment buildings. The exhibition hall is an open space located in front of the auditorium, in order to accomplish the best possible view to the street. The auditorium is located inside the vivid red box that provides the privacy needed for events that take place there, such as lectures or presentations. On the second floor (2L) there is a bar with a tremendous view of the Acropolis. The visitor has passage from this space to the terrace green park and enjoys a privileged view of the archaeological area, as well as the Attica light and the warm weather.

Furthermore, an exterior bar is placed in the middle of the garden that transforms the terrace into an attractive meeting point for all age groups. Thus, visitors are able to interact and communicate under the Hellenic summer light in the heart of Athens. The third floor (3L) hosts the restaurant with a panoramic view of the area that evolves dining into a unique experience. All levels include a storage room, lift, stairs and WC with facilities for the disabled. On the underground level (-1L) there is the parking area that is accessible from Kallisperi Street from the rear, which is able to serve both visitors and local residents when needed.

The materials of the building refer to ancient Hellenic architecture of the Acropolis complex, as well as the whole building concept. Pentelic marble is selected for the outside rough surfaces of the building. The result is an architecture that is consistent to its historic context. Marble pieces are used on the tower for shade during the warm summer months of Hellas. The rectangular solid and the vivid red colour of the auditorium are inspired from the shape of the Parthenon monument and also from the colour that sekos (cella) was painted back in the 5th century B.C. Finally, large glass frames line the exterior of the building to give it a sense of airiness and boost the interaction with the Acropolis complex and the other archaeological monuments of the area.

As an epilogue a phrase of a famous architect of the last century has been chosen. Dimitris Pikionis redefined architecture in Attica using the threads of Hellenic history that run through the fragments of time:

“Architecture, perhaps more than any other form of art, can fill our everyday life with poetry” 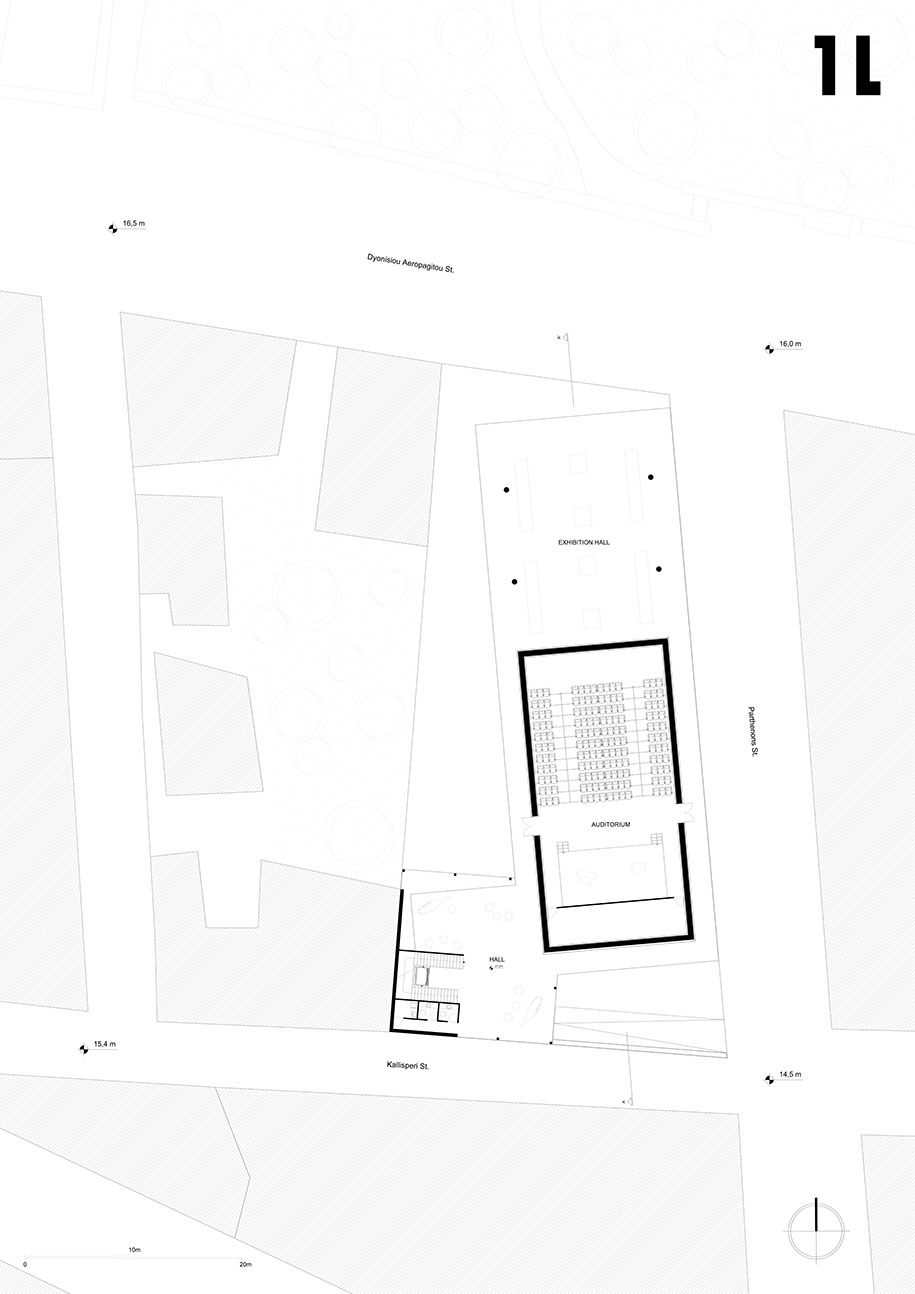 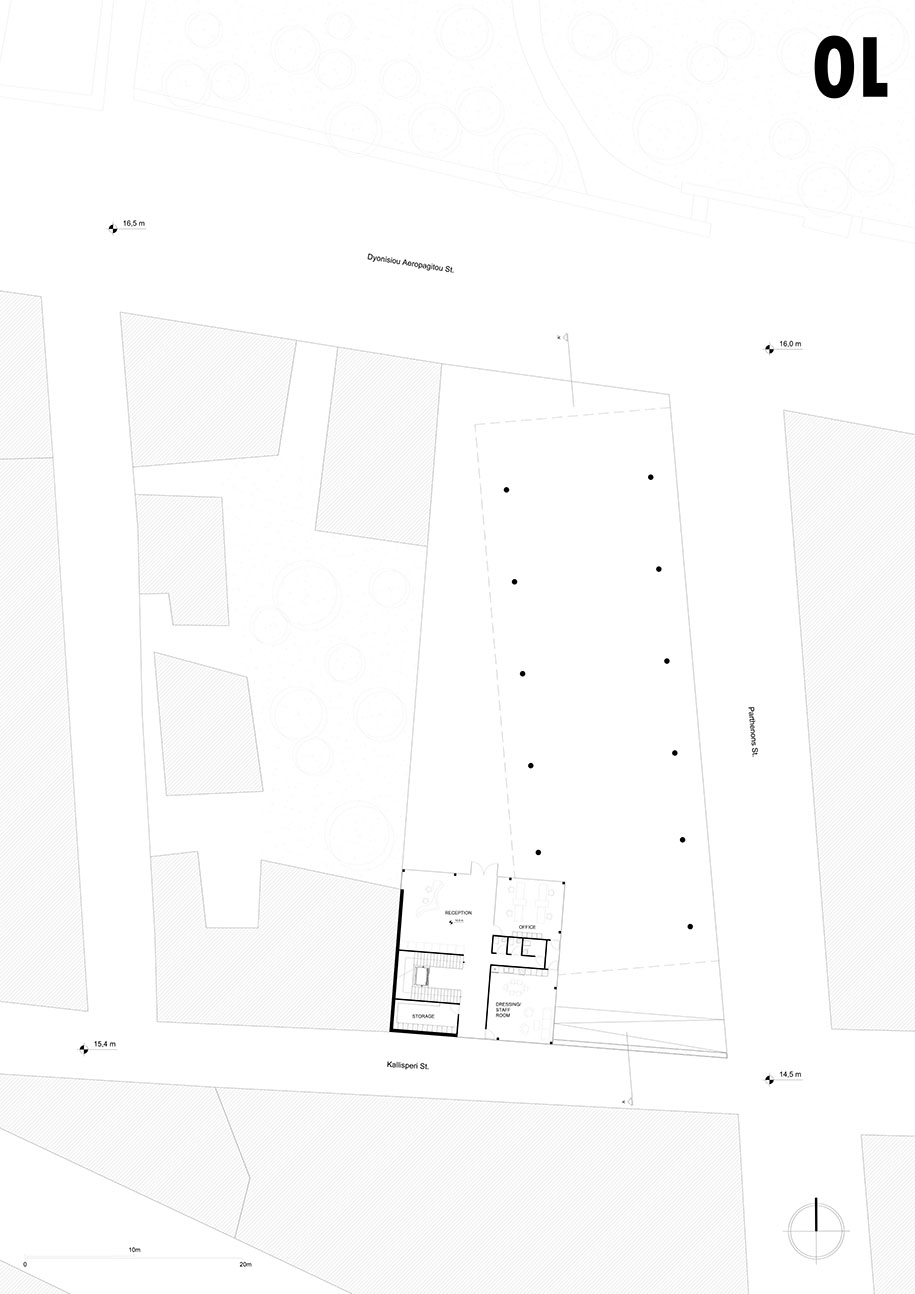 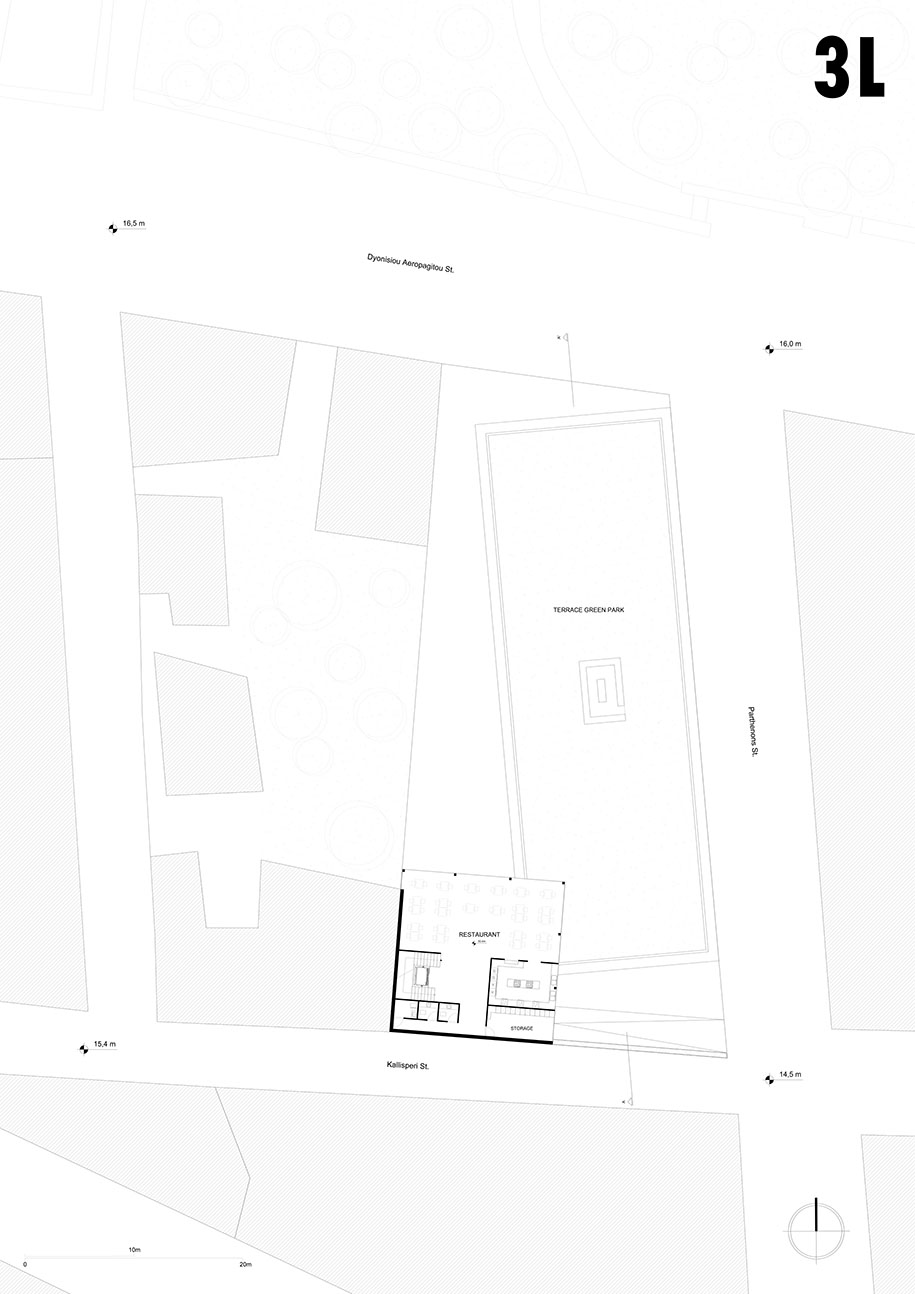 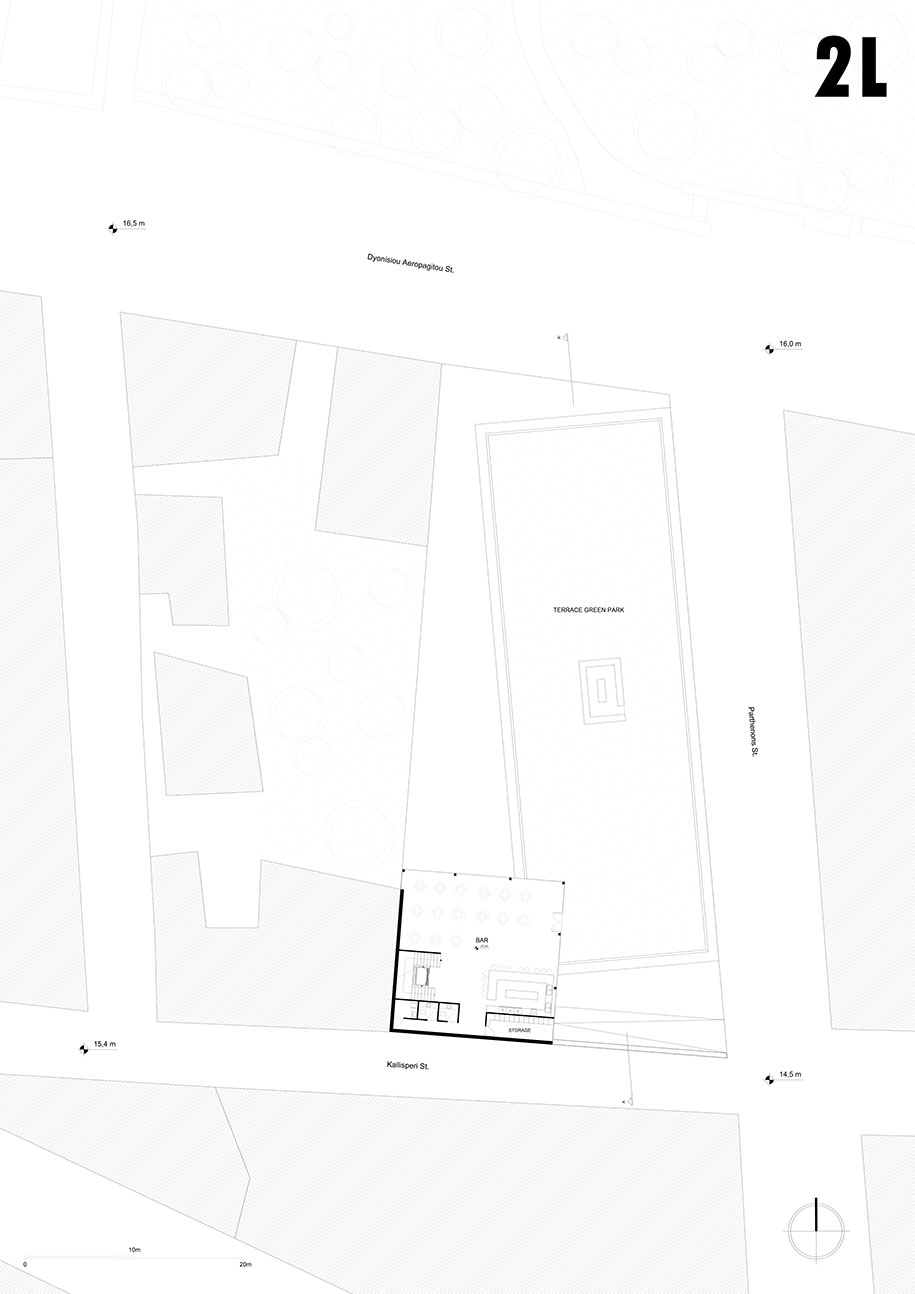 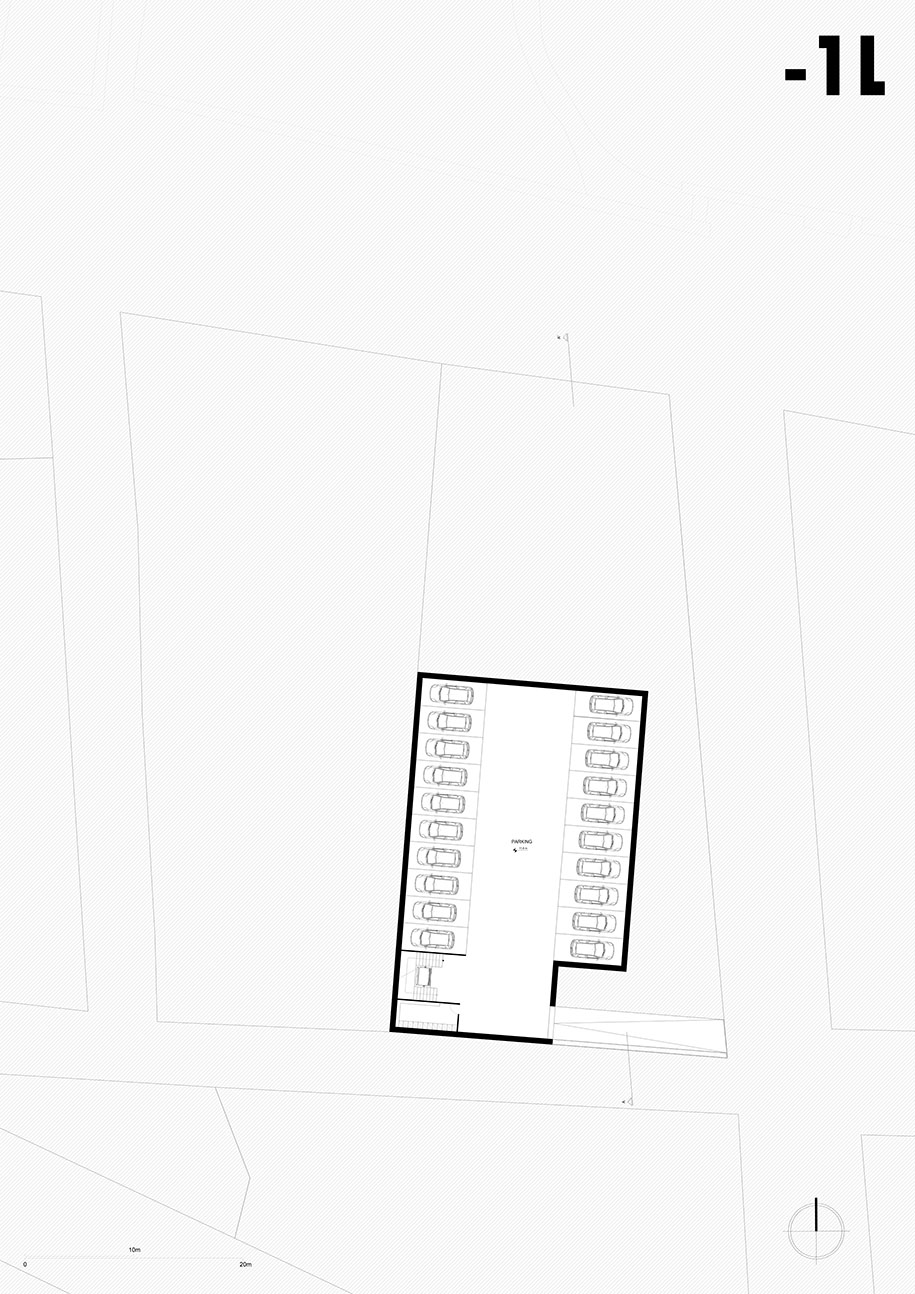 by TINA MARINAKIArchisearchhttps://www.archisearch.gr/wp-content/uploads/AG-Design-Agency_Pandemic-Architecture_230320-3-370x700.jpg
SHARE THIS PAGE
WITH YOUR FRIENDS