Design thesis at the AA DRL Theodore Spyropoulos studio by Akis Polykandriotis, Giulia Arienzo Malori, Shiri Dobrinsky and Tao Yu, entitled “Tropos”, proposes a model for an infrastructure aiming to augment the experience of the inhabitants of the city through an interactive medium.
-text by the authors

Tropos is an aerial prototypical system with the aim of generating an additional layer of infrastructure to be implemented in the urban fabric.

“We live in a world constructed of complex relationships. The interactions occurring within and in between processes, facilitated by the advance of technology, are generating and being generated by rapidly changing environments. Within this context, we believe that architecture should be able to contain the changes, adapt, and participate. Infrastructure is to become architecture”, says the team.

The existing infrastructure as we know it is characterized by its functional and operational role in the urban fabric. Distributed throughout the city, it is fundamentally invasive and permanent, fixing and freezing the foundations of the urban layout.

Master students Akis Polykandriotis, Giulia Arienzo Malori, Shiri Dobrinsky and Tao Yu propose a model for an infrastructure aiming to augment the experience of the inhabitants of the city through an interactive medium: “We believe that infrastructure should be dynamic and flexible, and to have a tendency of temporality. Implemented in the existing urban fabric, it should be able to respond to the changing conditions, deform and adapt, thus it should operate in a non-invasive manner. These properties are to be achieved by bottom-up research methodologies”. 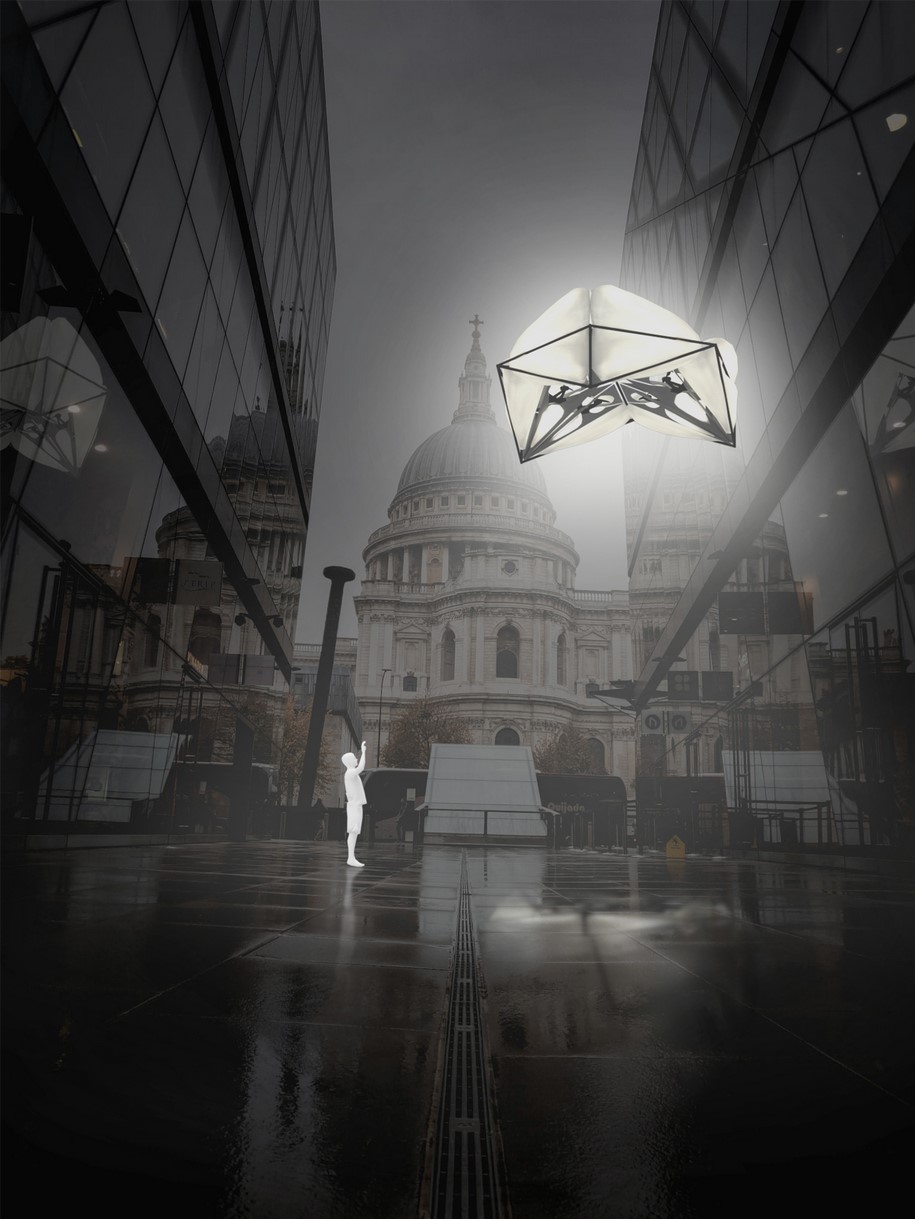 Therefore, they are basing our system in the air, allowing freedom in terms of mobility and dynamism, leaving no footprint and liberating the ground level for free movement. The system operates by localized communication generating a reactionary swarm of agents, performing a higher level of organization, enabling real-time decision making, which makes it adaptive and flexible.

Achieving a sense of space within the temporary nature of the system requires the use of the atmospheric element, which is facilitated by the use of illumination and the transformable geometrical properties of the system. Those attributes, which are implemented in the individual unit, also serve as a strategy for mobility, formation and communication between units and the human participants, enriching the level of interaction. In a population, coordination and cooperation within the system are manifesting diverse spatial configurations, enabling the system to achieve various goals. 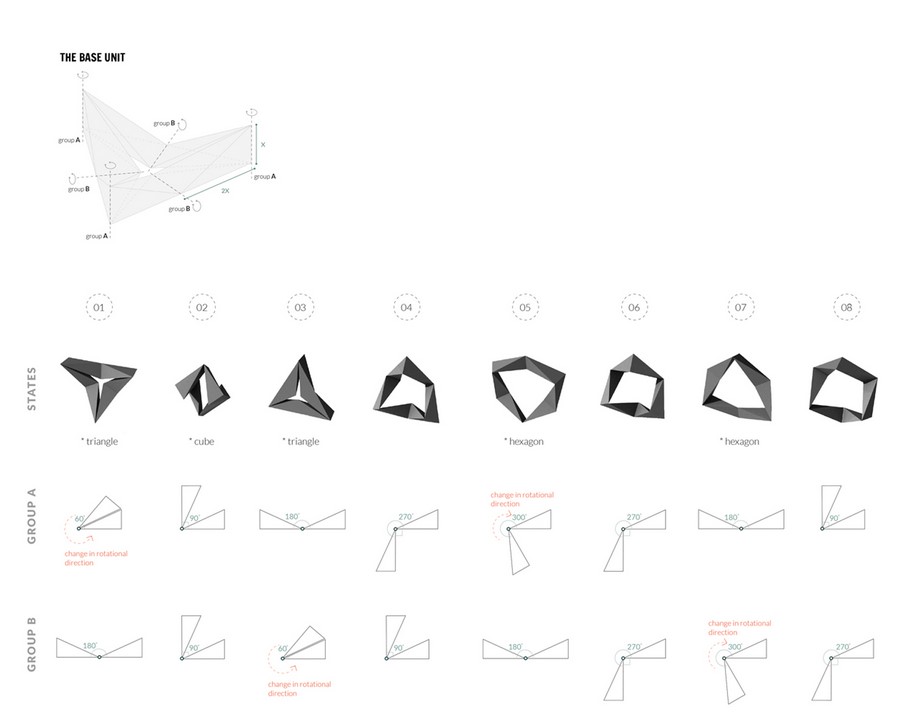 During their research for transformable properties in geometrical forms, the team chose the geometry of the invertible cube, originally discovered by Paul Schatz, as its base unit. It is constructed out of 6 tetrahedral segments, connected by 2 groups of hinges, allowing it to perform a full loop of inversion.

The full cycle of the unit consists of a transition between different states, whereas the eight most significant are different variations of the triangle, the hexagon and the cube. The differences between the states are also expressed in the angles of the hinges and the angular relationship between the two groups of hinges. 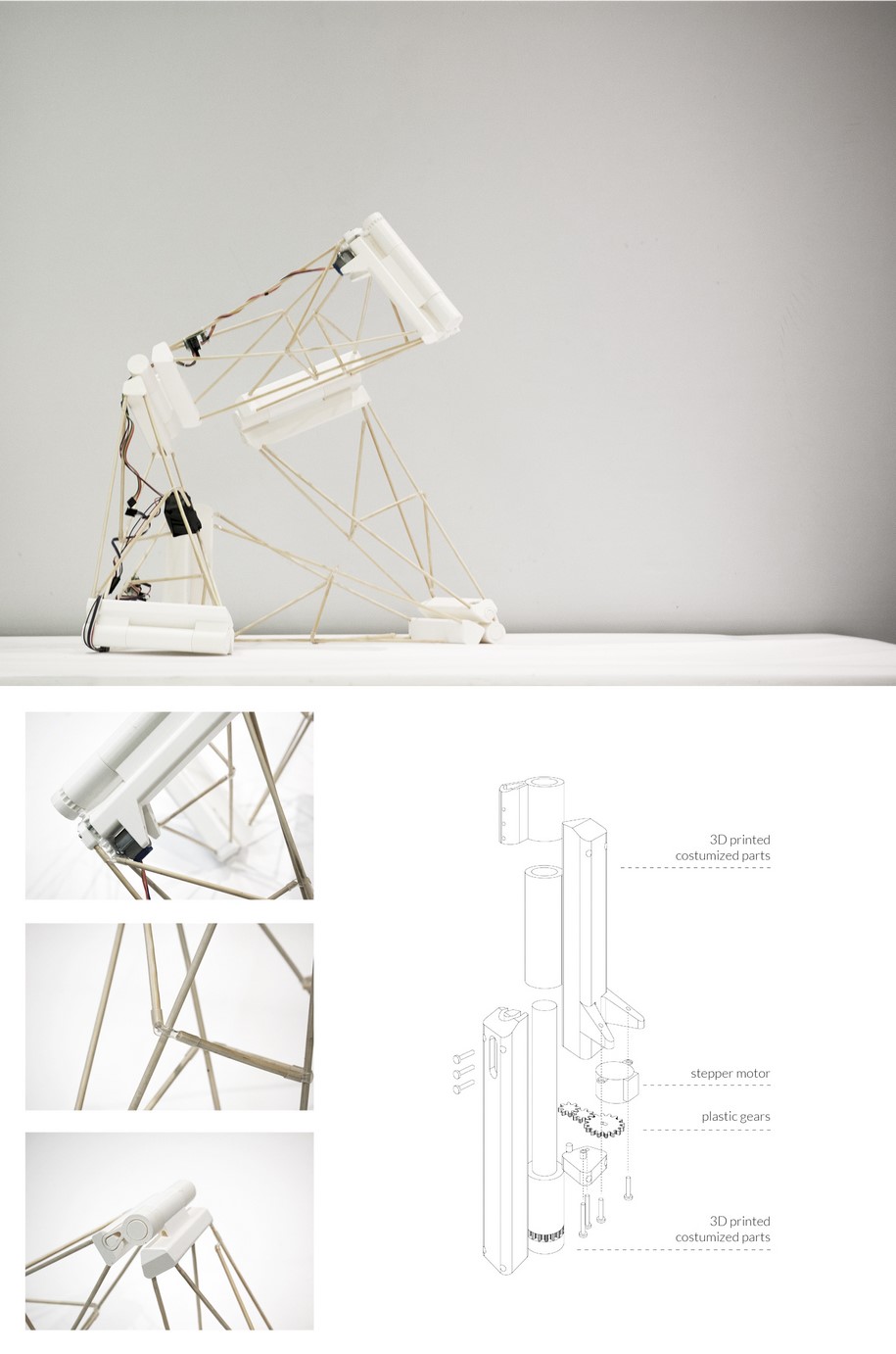 Prototype T05. Hinge design evolution: the torque is transferred from the motor to the hinge by the use of gears.

Transformation of the unit has been studied by successive experimentation through prototypes,  focusing on exploring different ways of using rotary motors, mainly the number and position within the hinge in relation to the rotation axis. 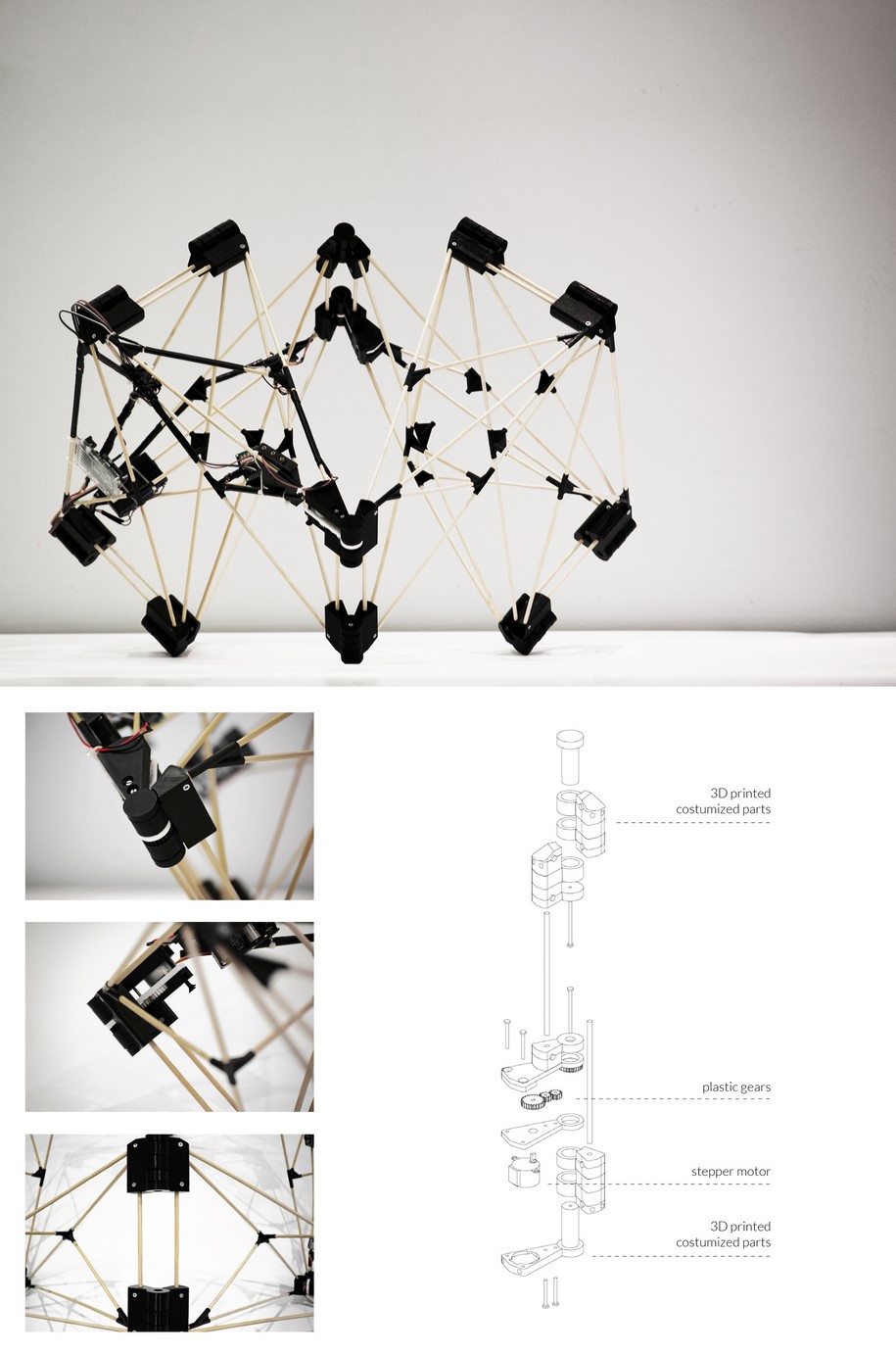 Prototype T06. Hinge design evolution: the size of the parts is reduced in order to reduce weight and increase the accuracy of the gears mechanism.

Mobility in the system is manifested in autonomous flight, whereas each unit is an active member, able to make decisions in real-time with the aim of achieving various spatial and performative goals. 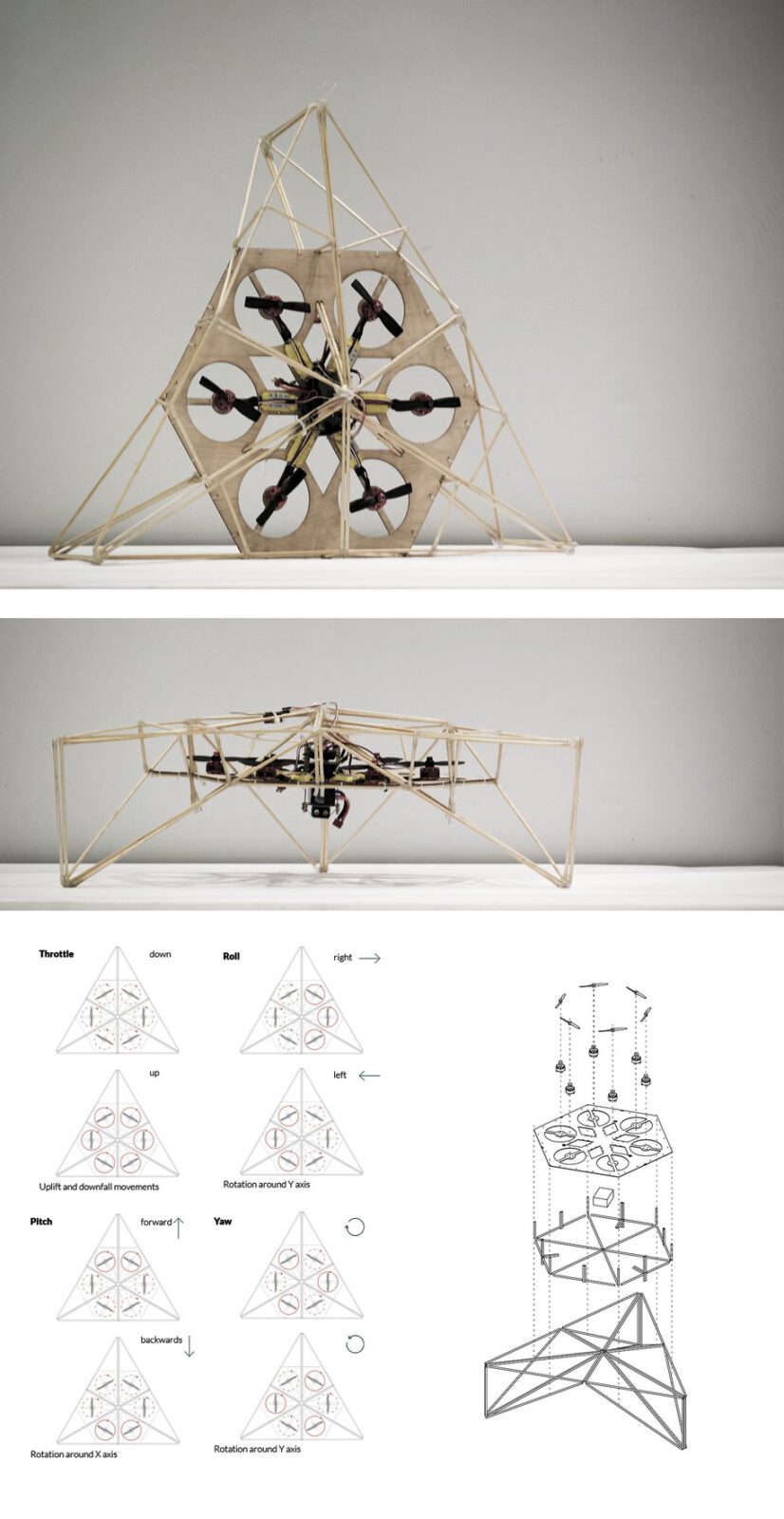 Prototype F02. Implementation of hexacopter configuration in the unit’s geometry to achieve lift and controlled movement. 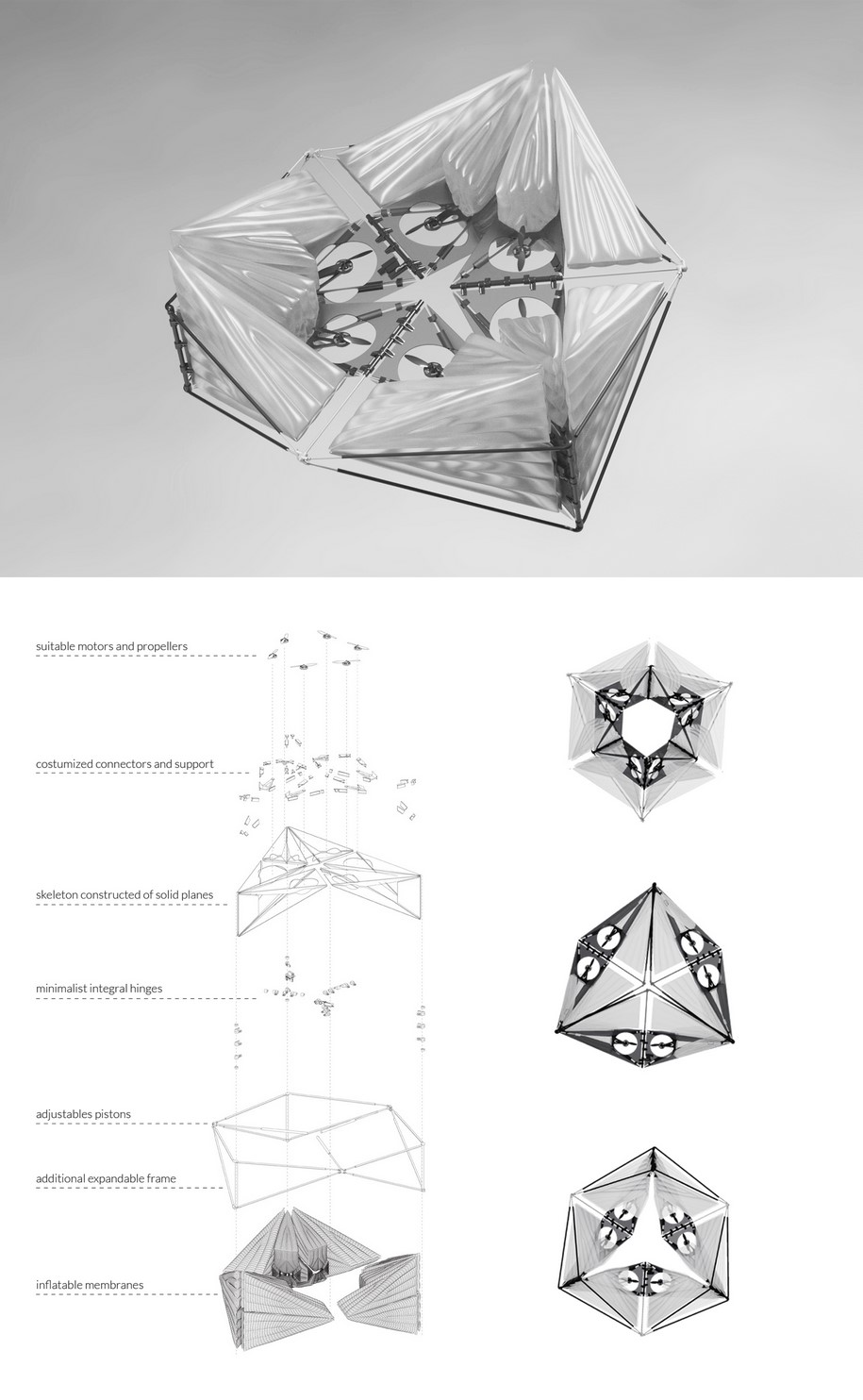 Βoth transformation and flight were merged into a combined strategy of a hybrid, in which the unit is able to expand its frame into a double of its size, and inflate membranes with a volume of four times the original unit, achieving a great volume of helium while still able to complete a full loop.

“Everything is situated within a process – everything is in motion. This not only applies to comprehensive systems…  but also to our perception of a given space, here and now, and to our interaction with other people.”
— Olafur Eliasson 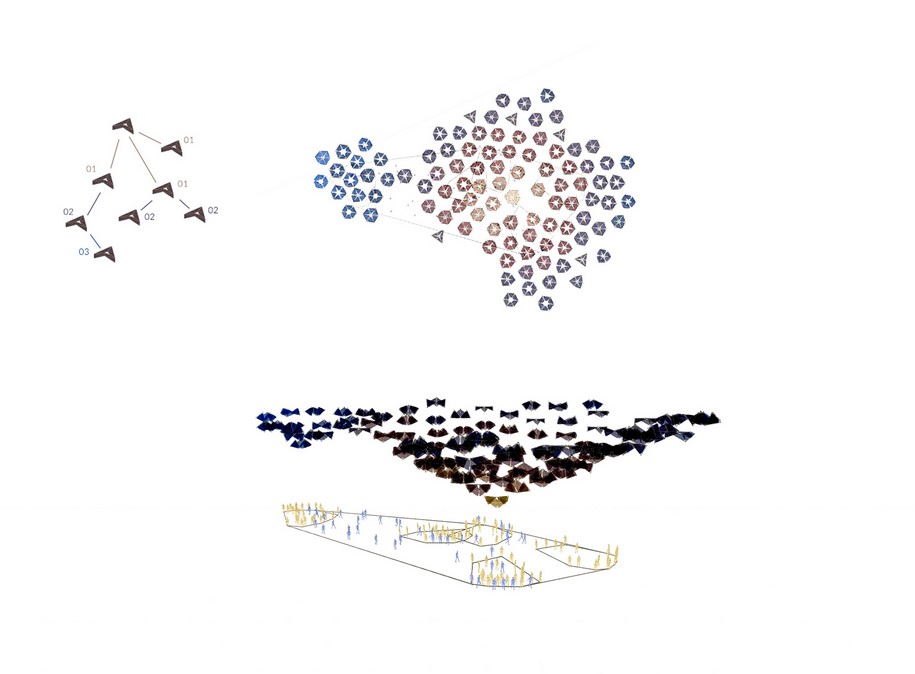 The units are capable of recognizing patterns in human behaviour and based on that make decisions regarding their current goal. The ability to differentiate between patterns is based on the input variables, such as velocity, density and duration, whereas the combination of those inputs, the current position of the units and the environmental input is enabling them to construct a complex understanding of the environment and to choose the level of interaction and make decisions accordingly.

When the system mode is reactive to changes in the human state as a group, the configuration is changing based on time and motion, reacting to local patterns, generating choreography by transitions and transformation. 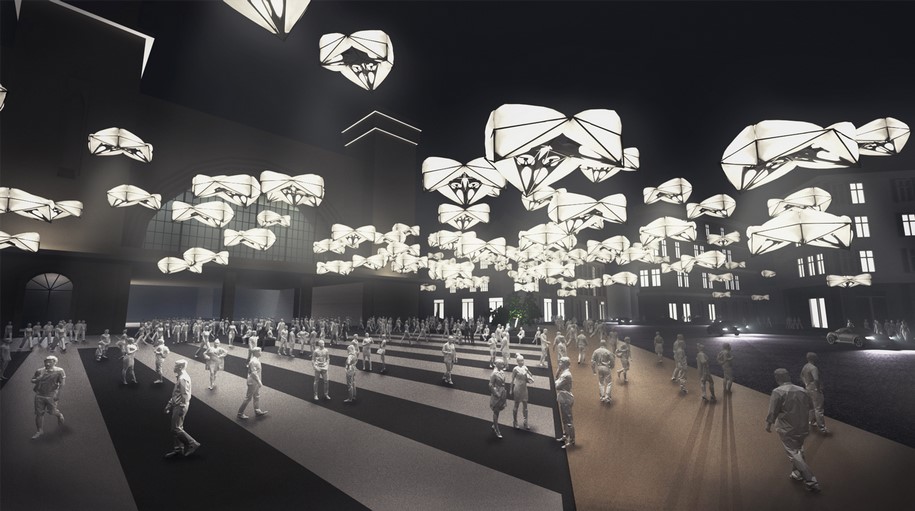 The units operate in collaboration to generate gradual transitions between different areas of the city, which also contribute to the sense of orientation of the inhabitants. 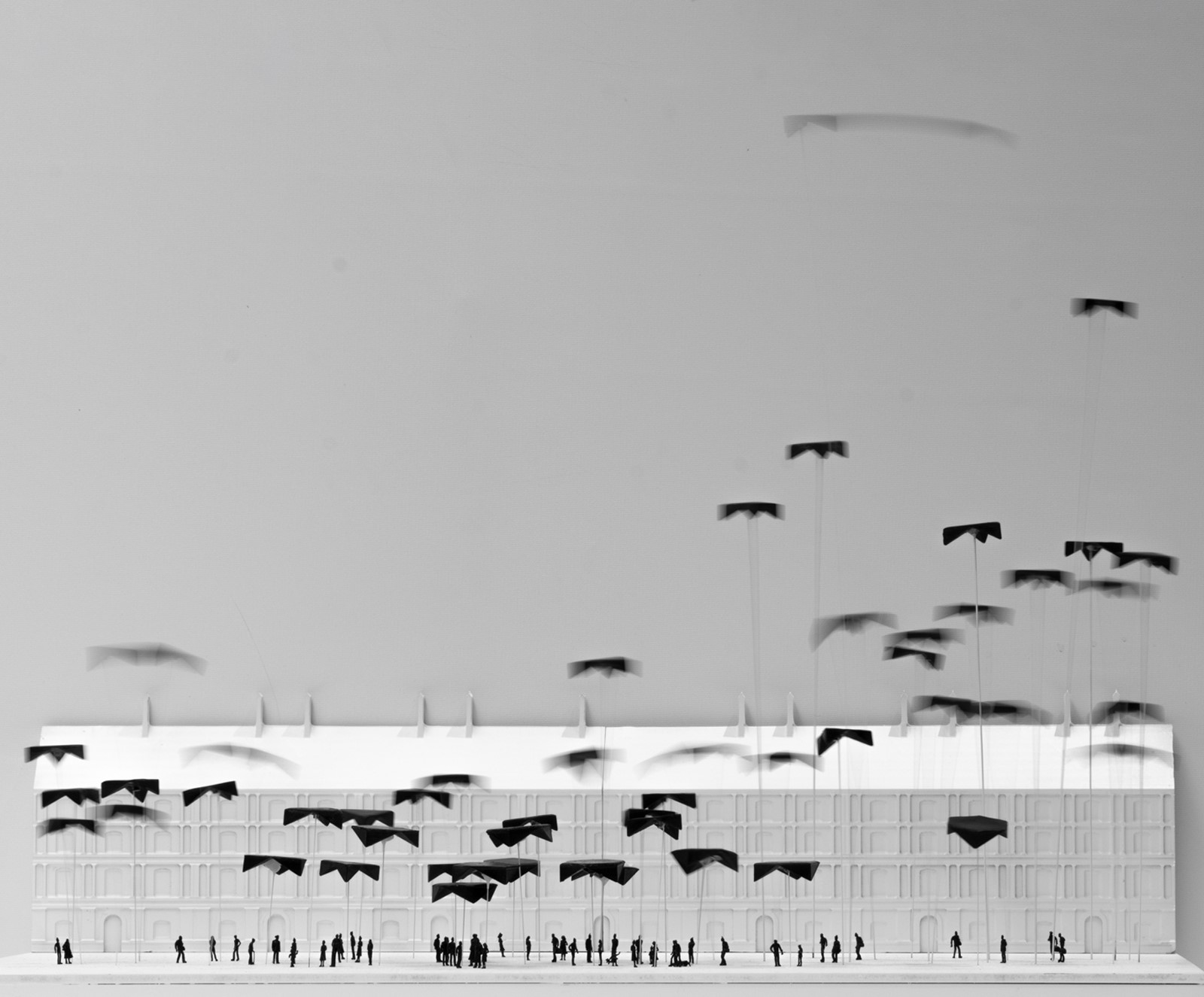 Tropos is an aerial prototypical system with the aim of generating an additional layer of infrastructure to be implemented in the urban fabric. 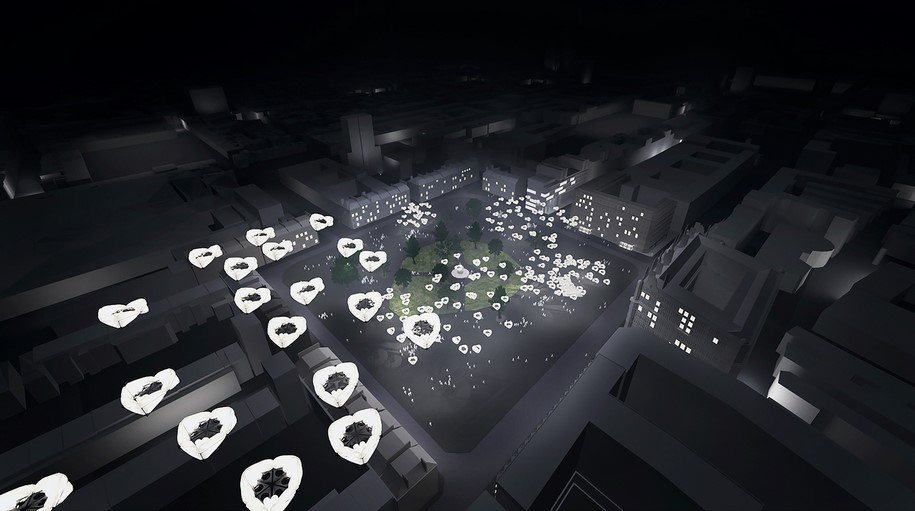 When implemented in the city, the system becomes a part of the urban landscape, interacting and influencing the dynamics of familiar spaces.

An agent-based strategy is allowing the units to make decisions according to local conditions, resulting in a reactive and adaptive lighting system, able to generate different densities, creating constantly changing atmospheres, enriching the spatial experience. 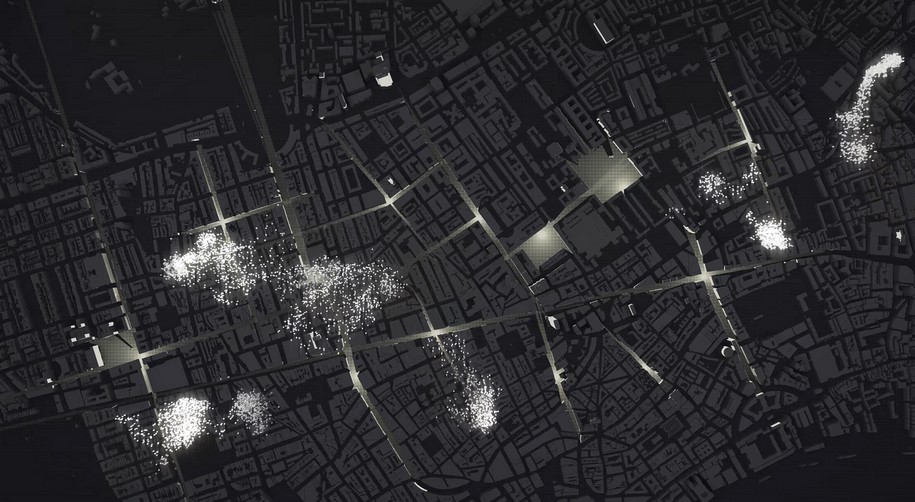 Navigating throughout the city, the units are capable of reaching high altitude to increase flexibility when orienting toward their desired goal.

While migrating, the population of units are using the wind currents as assisting force, and modify their trajectory accordingly. Clusters are aiming for reducing energy consumption and reaching the desired destination simultaneously, which results in an alternation of positions within the flock. 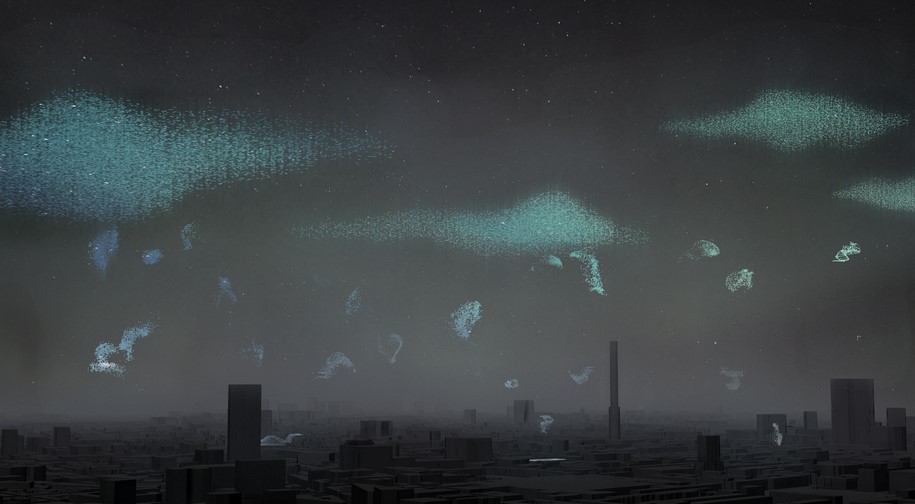 Throughout the lifecycle, when no particular goal is being detected, units are able to use their structural features to ascend to higher altitudes, above the active height, and to form a passive swarm, capable also of charging and increasing the level of energy of the cluster. The passive swarm is becoming larger hence more resilient to environmental forces 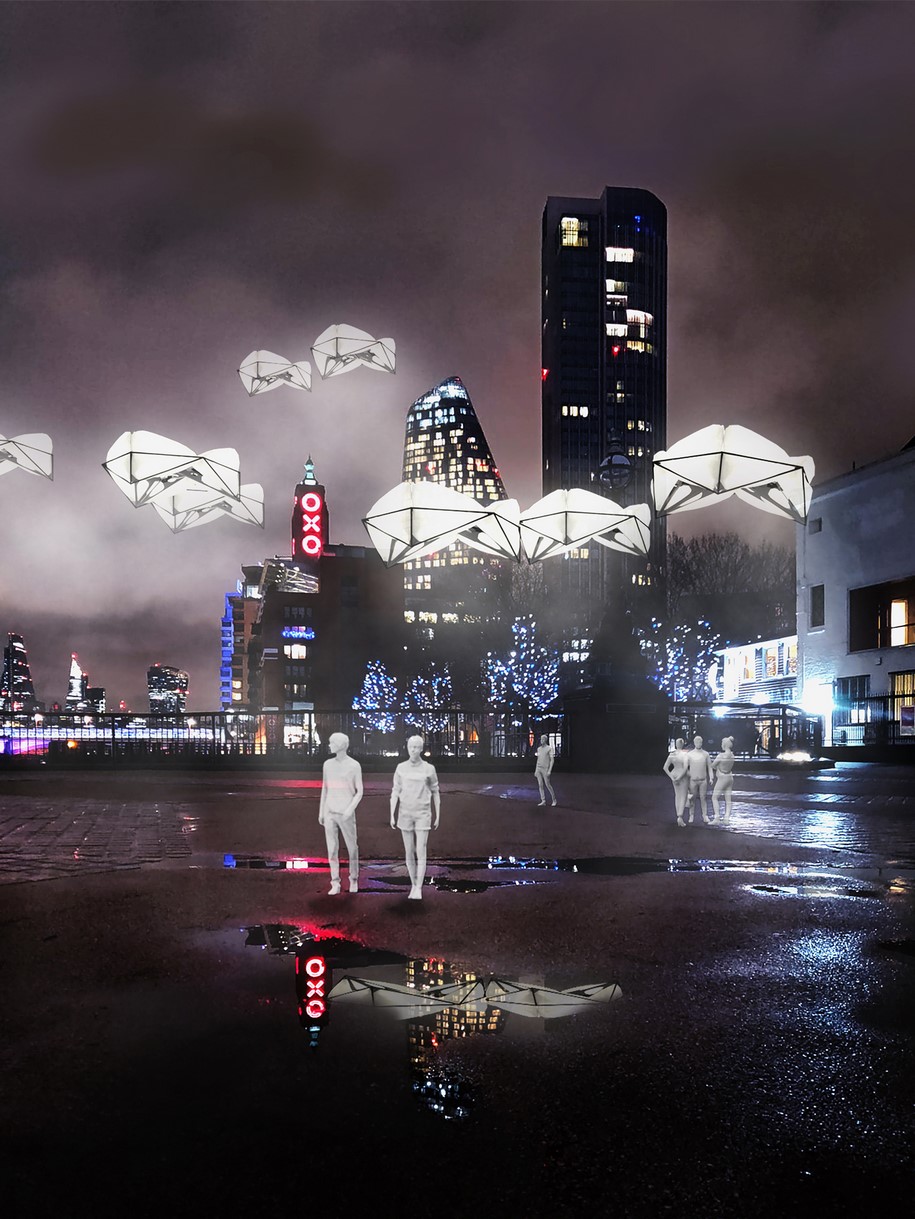 When speculating on the future of culture, the team believe that technology is an inseparable part of the culture, thus it should serve as a tool for enabling accessibility and as a medium for generating a new kind of interactions and relationships: “Therefore we feel that by occupying the air with an adaptive machinic ecology, influencing and being influenced by the constant changing conditions, we can start to speculate on rich information environments and extended use of the public space, which will enrich our urban life, in terms of both interaction and spatial experience”.