Martins | Afonso atelier de design renovated a family-house in Courdimanche, France creating a game of solids and voids unfolding around a mezzanine net and a huge sculpted wooden volume.

In the house, space is used but has yet to be lived in. The family, who has recently moved in, is settling in, capturing sensations and sequences which will soon become the pillars of the upcoming project. The owners wanted to renovate and adapt this house to their way of life, a more comfortable one, and above all, in accordance with their tastes. This project gave us time to think about spaces in a new light, with new use, especially for children.

The main asset of the house was its light, and the double-height volume in the living room, unexploited until then. As a result, a mezzanine net came to life in this space, allowing the outdoor light to come through, yet offering another way to take over this area. 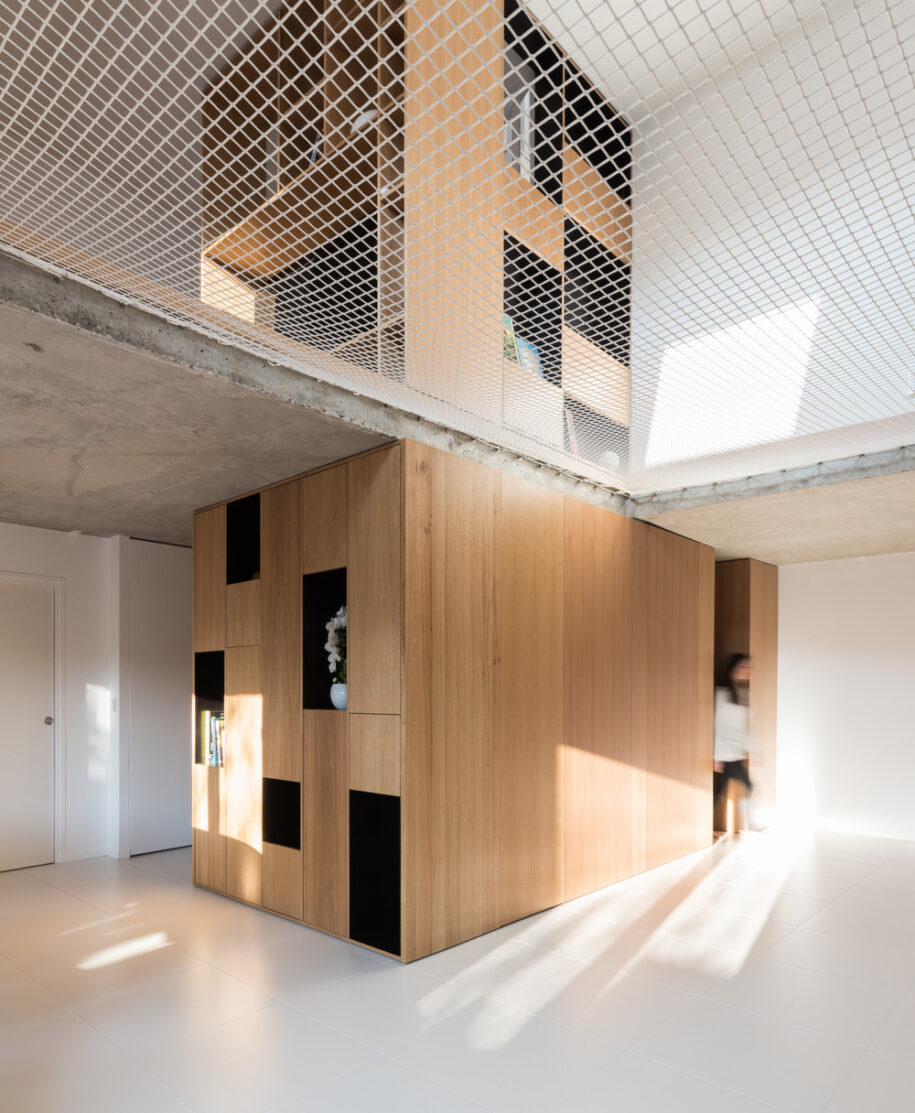 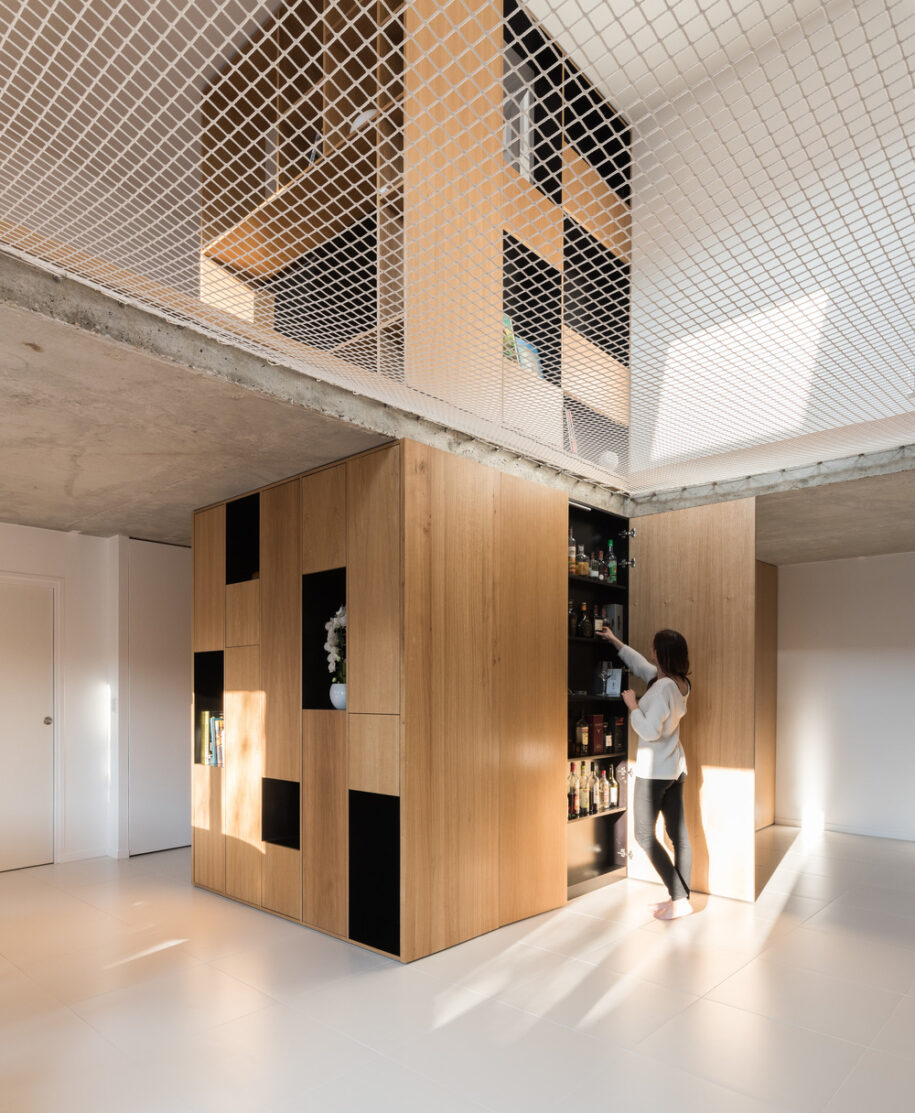 The white floor on the ground floor, beyond its high reflective potential, brings out all the elements that are put down on it. The flooring shade also highlights an inversion of sensations with the shuttered concrete ceiling. This change upsets the habits to reinforce the notion of the void at the center of the net.

The integrated furnishings, mostly oak with some black spots, bring warm fragments to the place, as gold nuggets one ties oneself to and which structure the clear and infinite space. The goal was to reorganize these living spaces developed upon two floors, in order to create a general coherence in the project, while at the same time creating distinct areas dedicated to a specific use. 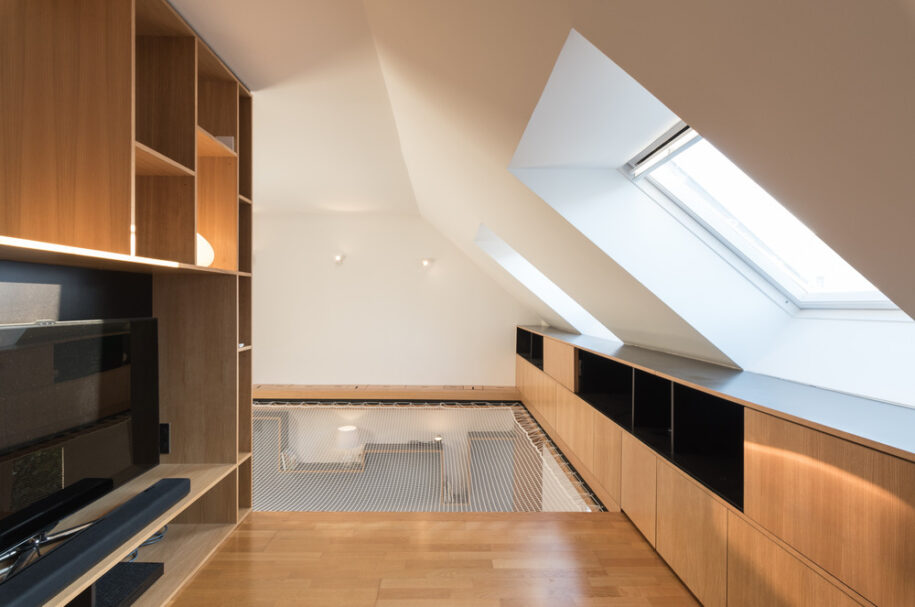 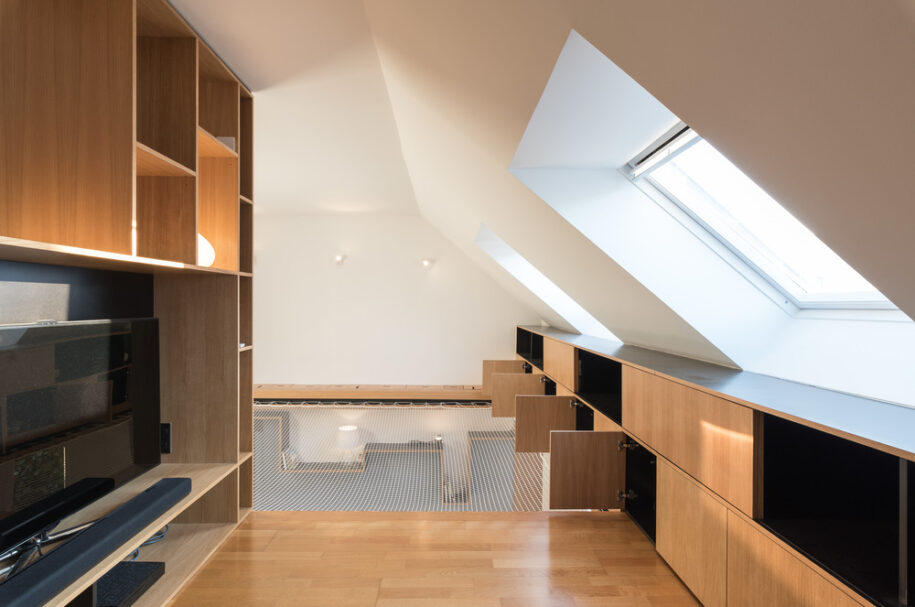 The central area links both levels as a backbone. 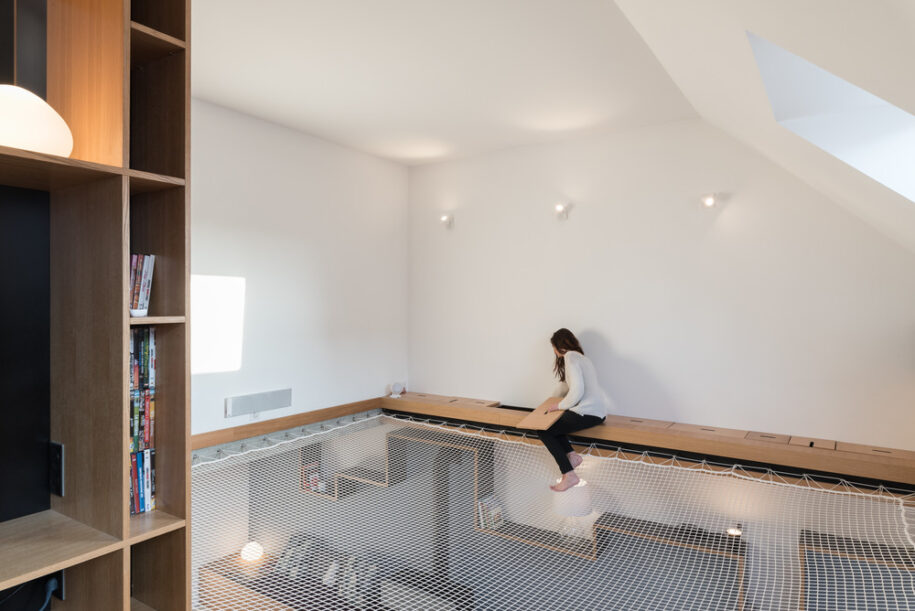 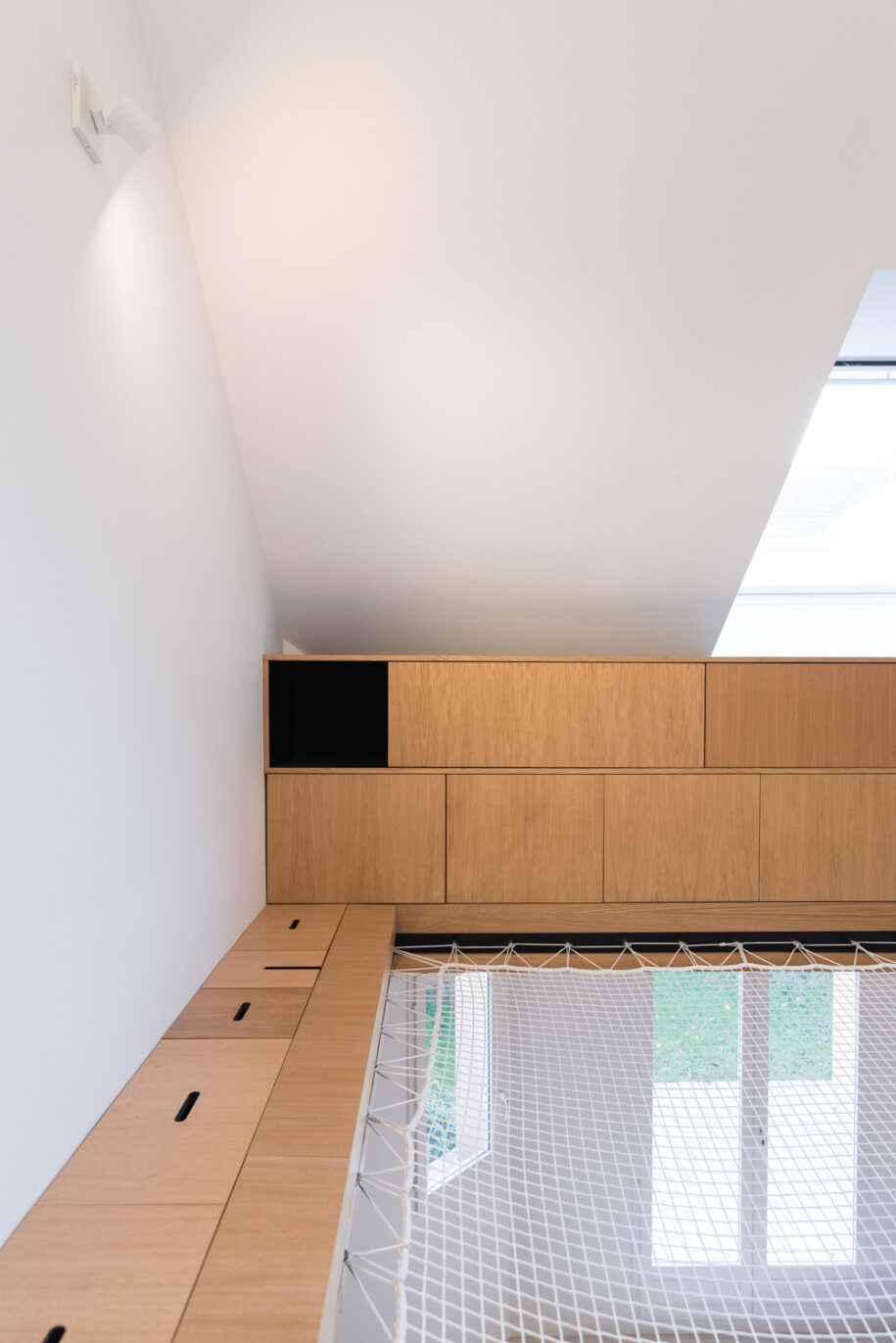 It is a huge sculpted wooden volume, in which several functions and usages are articulated: it is, on the one hand, the stairs that lead to the other floors but also access the basement, the toilets, the bar, the library, the storage for vinyl records, and the television unit. The whole is materialized with games of solids and voids, punctuated by numerous spaces hidden by door curtains or small trap doors. 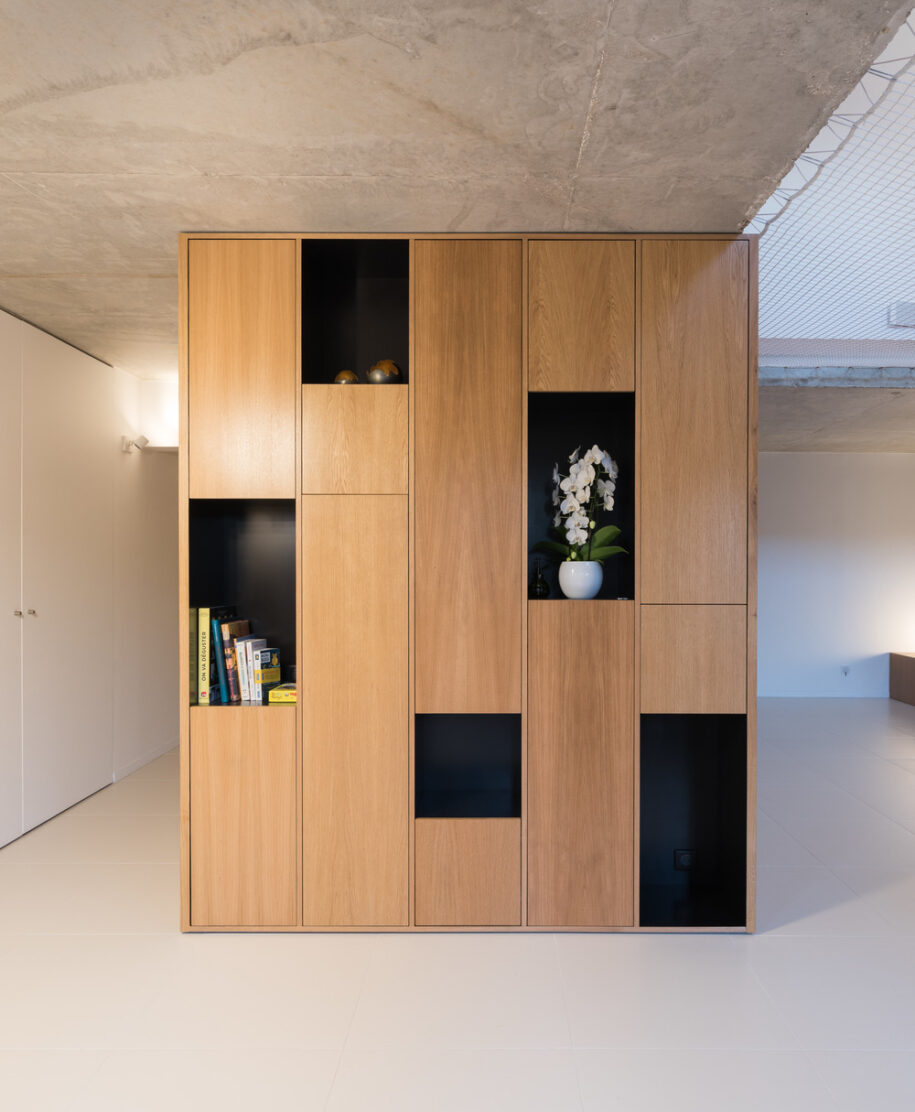 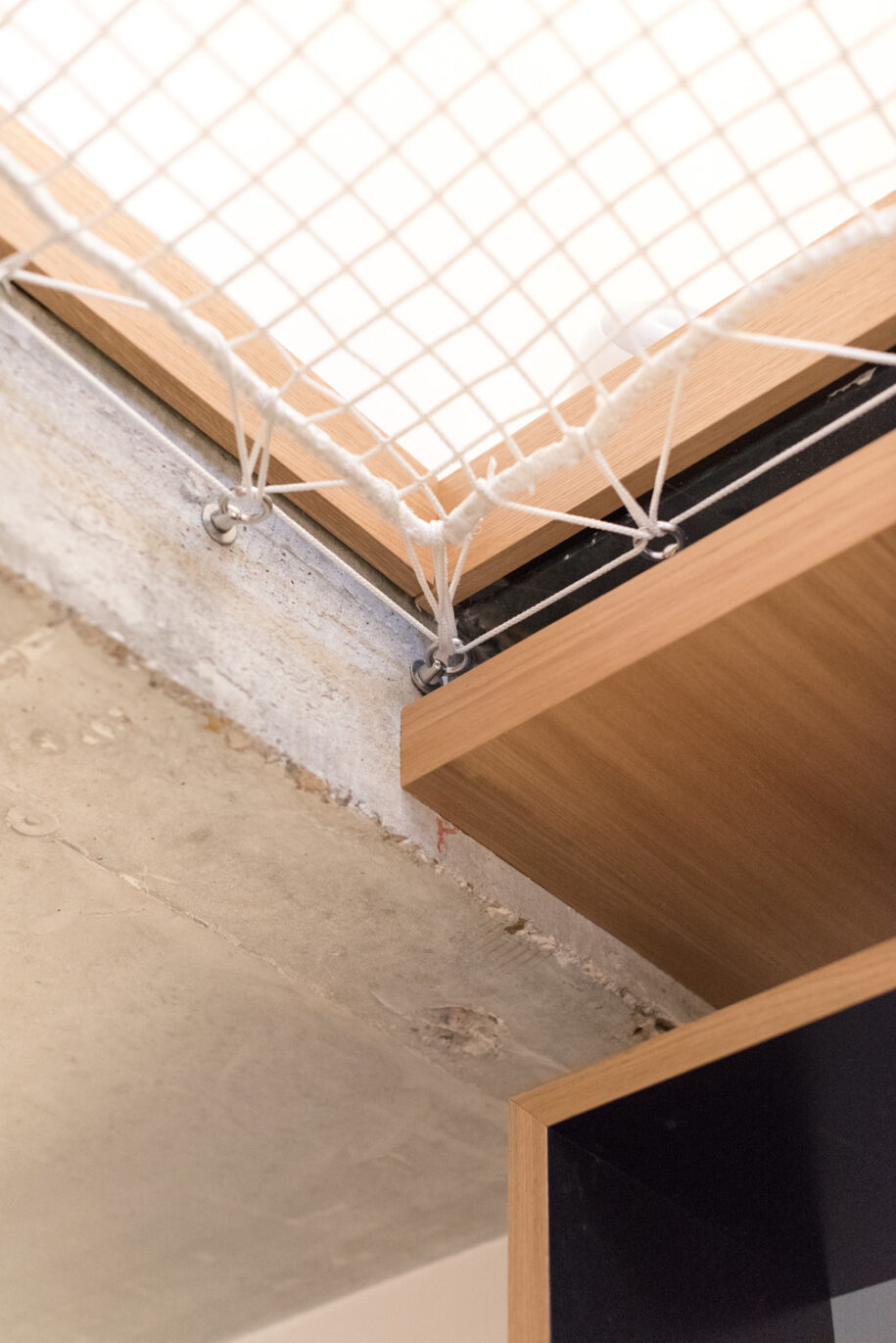 In parallel, a piece of furniture going through the front entrance of the house welcomes us, inviting us to sit down and take our shoes off before coming in. This piece goes up to the living room wall, facing the central block. This pathway made of wood throughout conceals numerous Hi-Fi storage units. In front of it, a line develops along the wall, on each side of the stove, with on one side a bench seat with integrated storage for parents, welcoming relaxation, and on the other, toys storage for children to play with. The whole is topped by large shelves, as a ribbon unrolling on the wall, sheltering books, and subdued lighting.

Hierarchy of spaces through matter 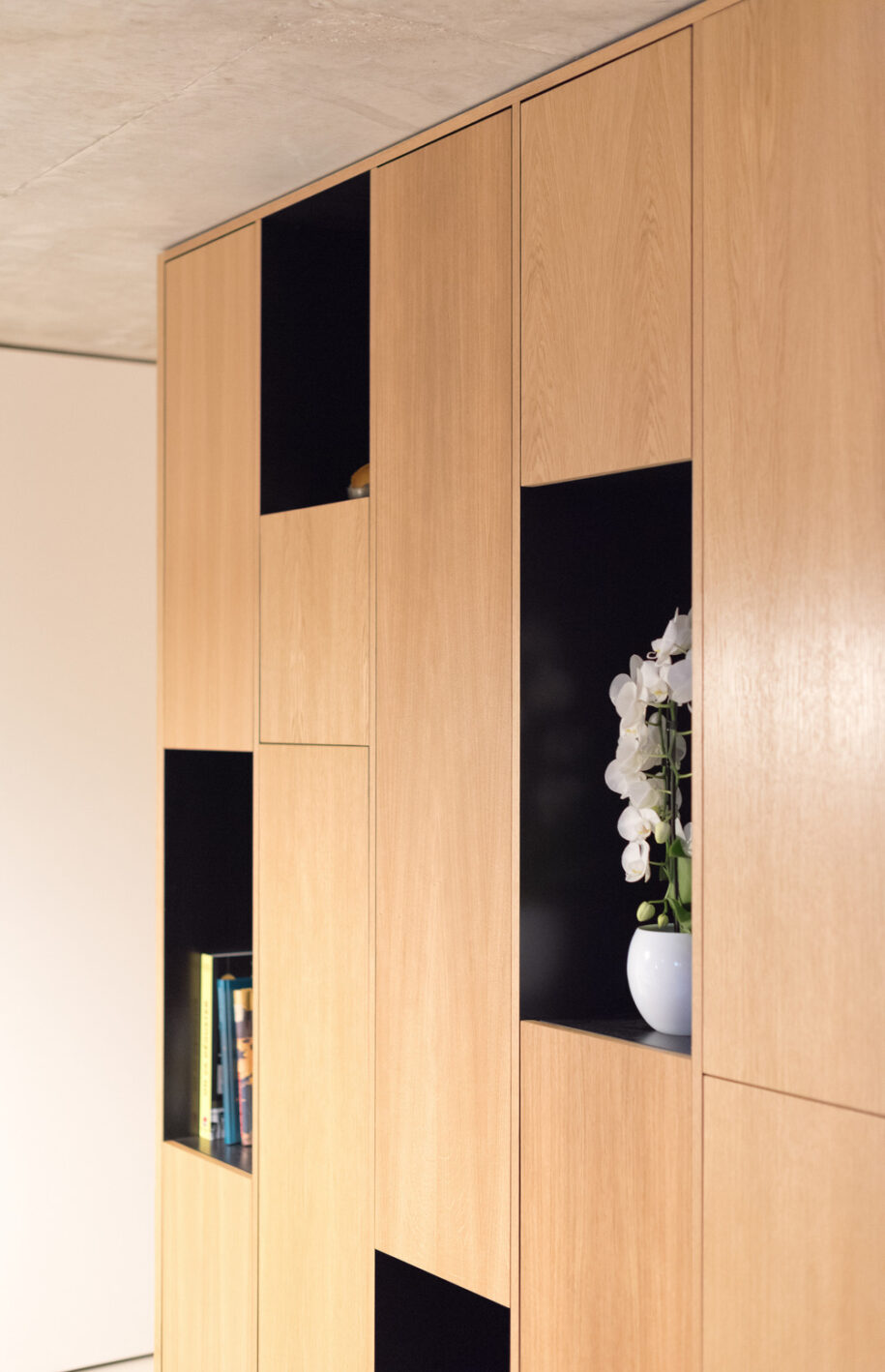 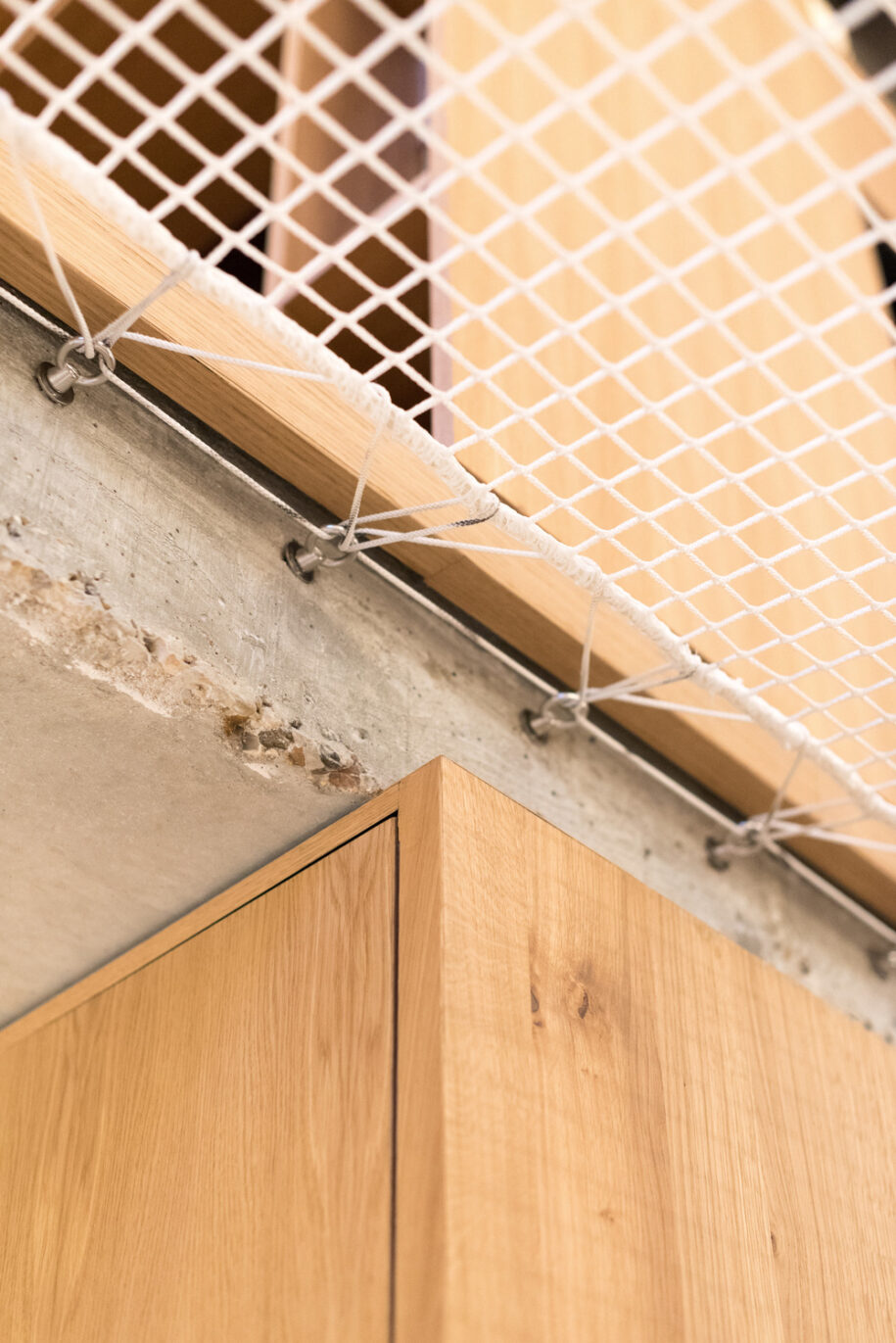 The mezzanine net becomes, depending on the time of day, a space for children to play, a place to relax in family, or a movie room. 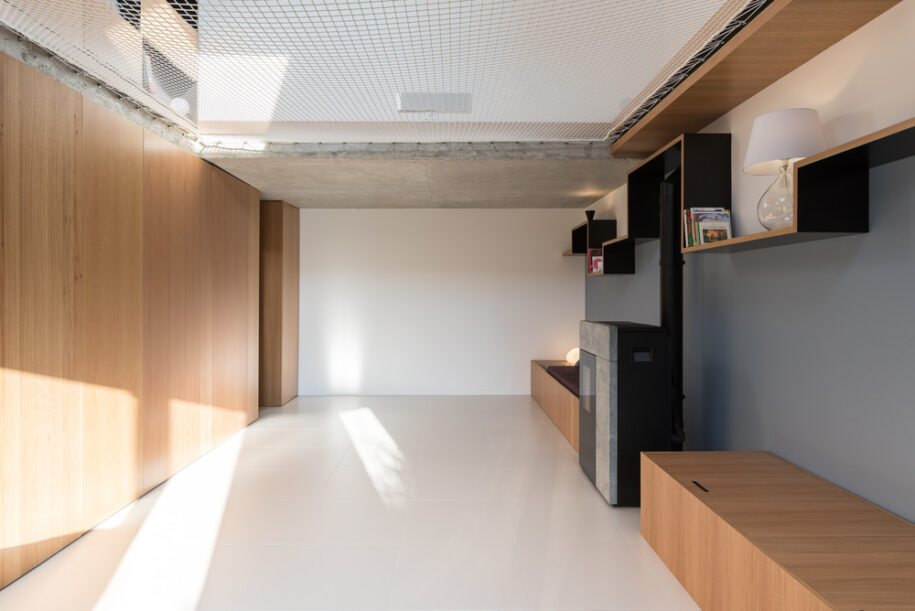 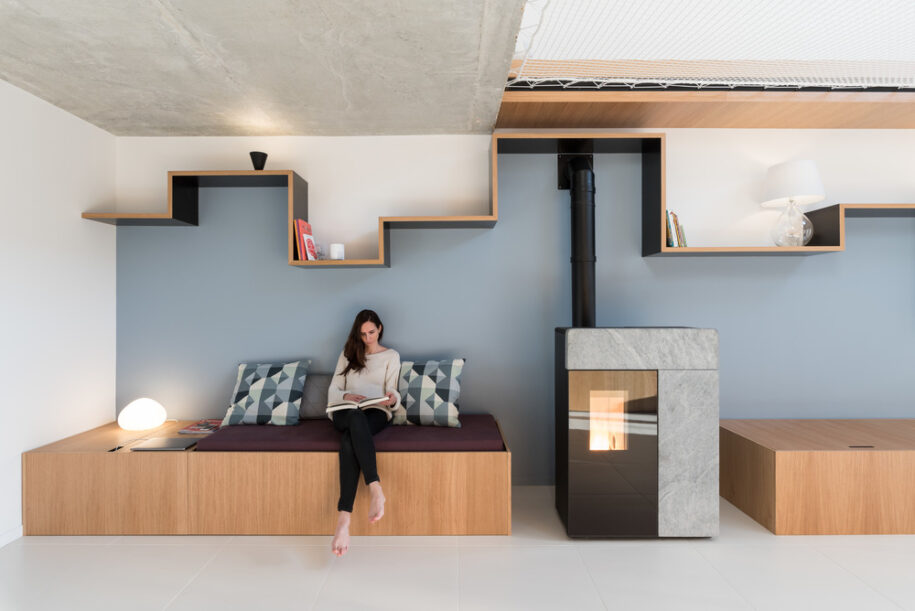 Bordering the net, along the wall, a wooden strip inhabits the residual space under the slope, offering a number of storages, and integrating a video projector and home cinema, concealed behind sliding doors once the showing is over. This strip continues on the next wall with a different shape, where the structure of the net is wrapped by wood and allows for a sequence of tiny trap doors, with some more storage spaces. 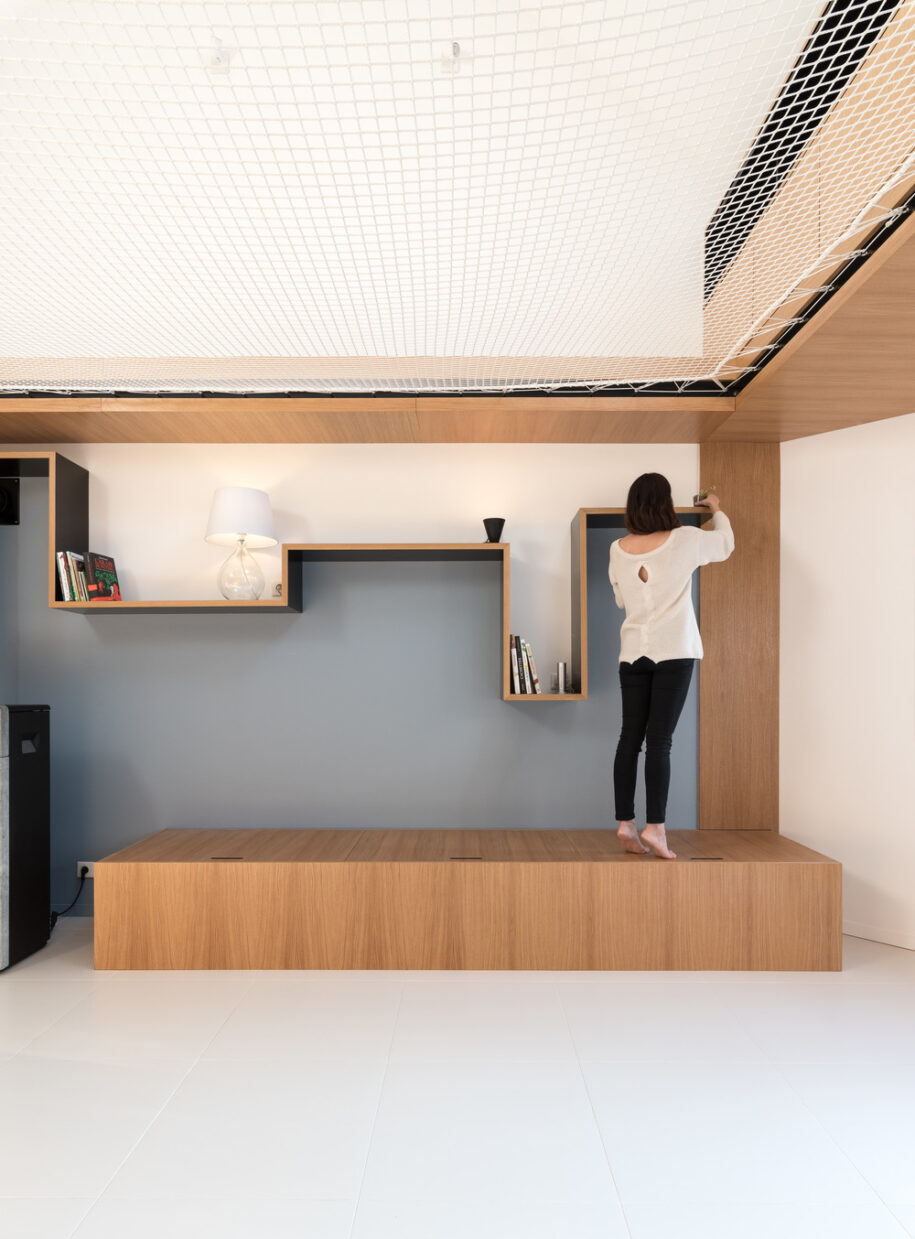 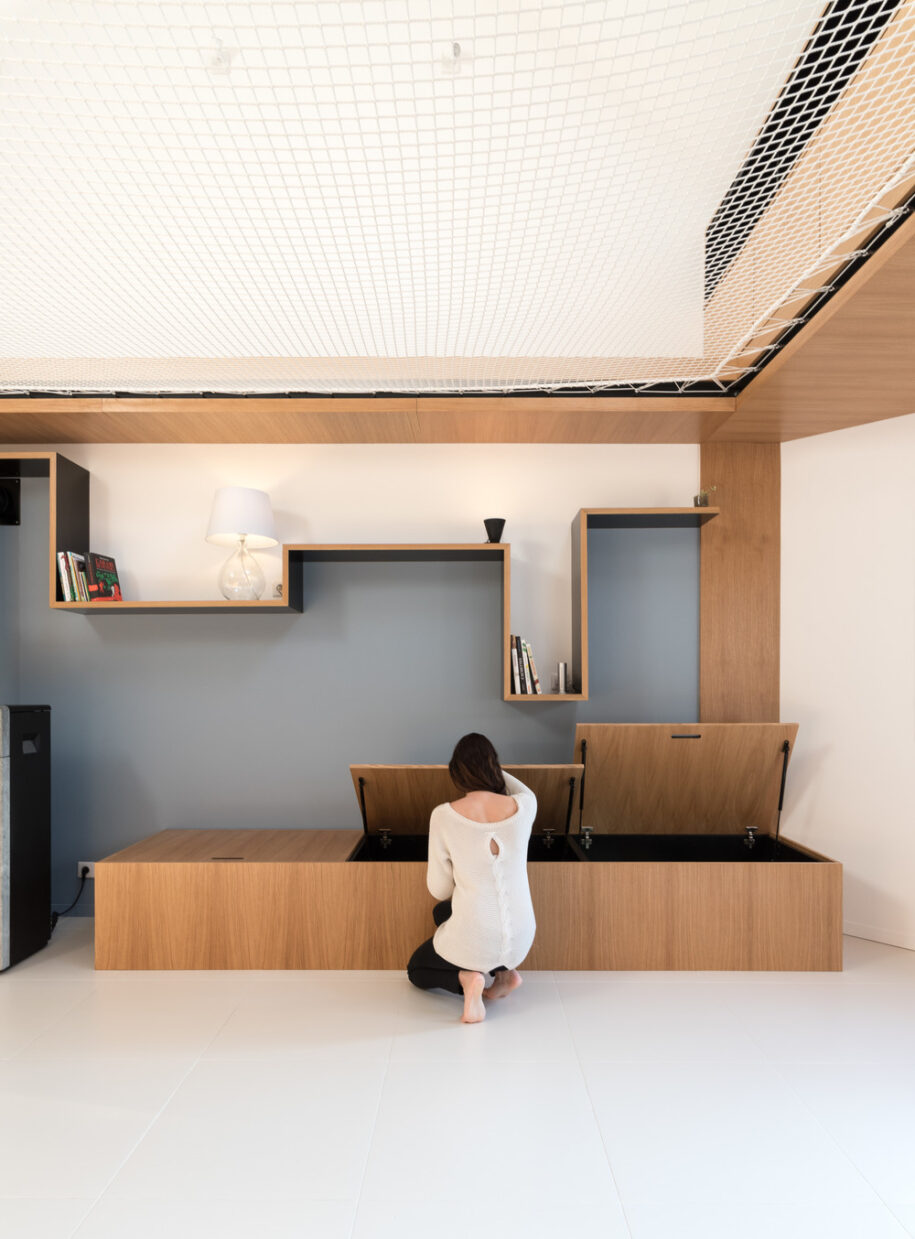 Like a theatrical production, the light falls onto the walls and the furniture, as such creating a warm atmosphere throughout the day, making these spaces pleasant and soothing. The result is a true call for relaxation in this area, where everybody finds their own space without cluttering the available space. 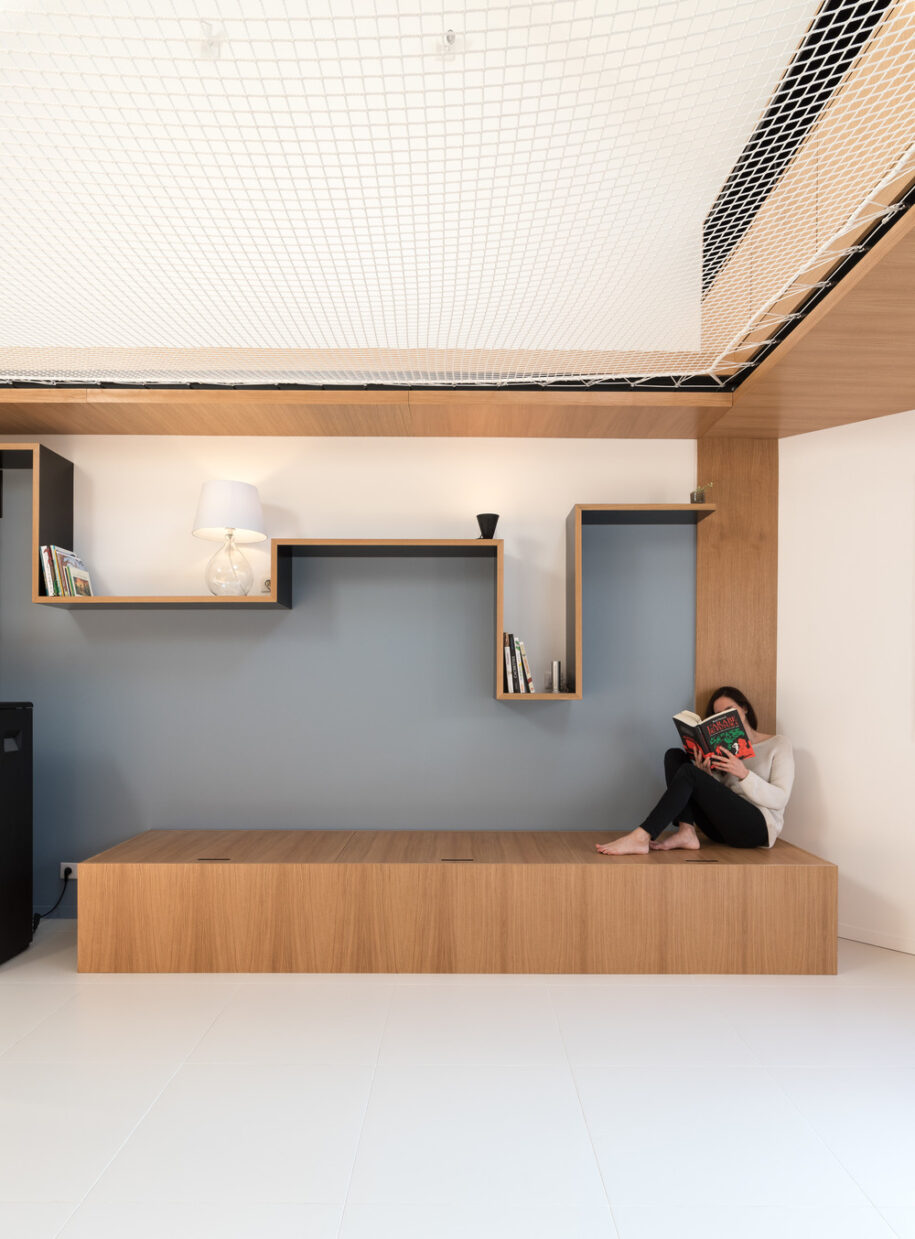 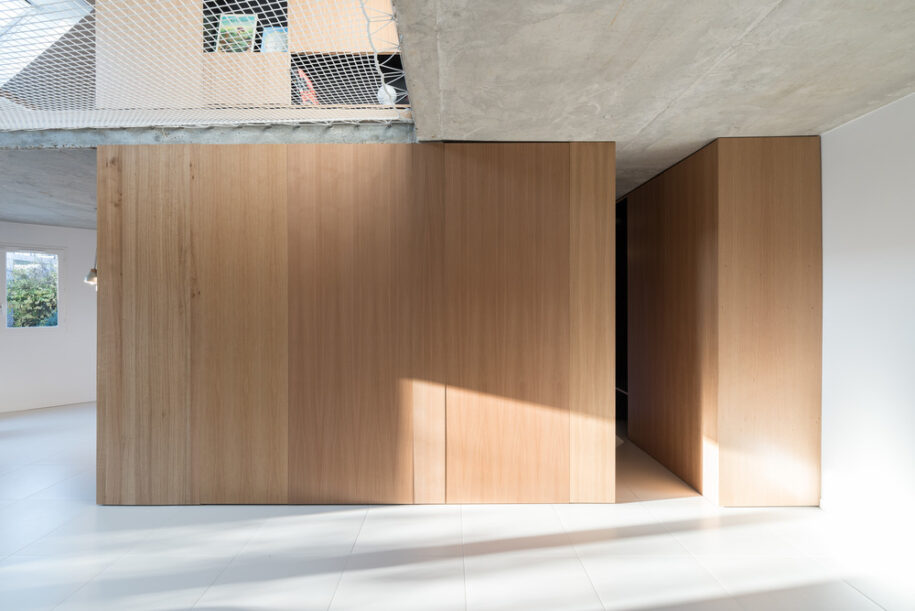 The workshop created by Mickaël Martins Afonso in 2016 is a reflection on a multidisciplinary career, cradled by studies of visual arts, applied arts, space design, and last but not least architecture, thus enclosing a journey rich in human and intellectual experiences.

The workshop works on different forms and scales of design, such as interior design, furniture creation, leading to the realization of the object. A new project is meant to reflect on the practices, to release a global thought of the inhabited space, but also to answer more precisely specific requests from each customer and thus to be able to create singular places tailored to their needs and desire, to each way of living and to actually live the architecture. 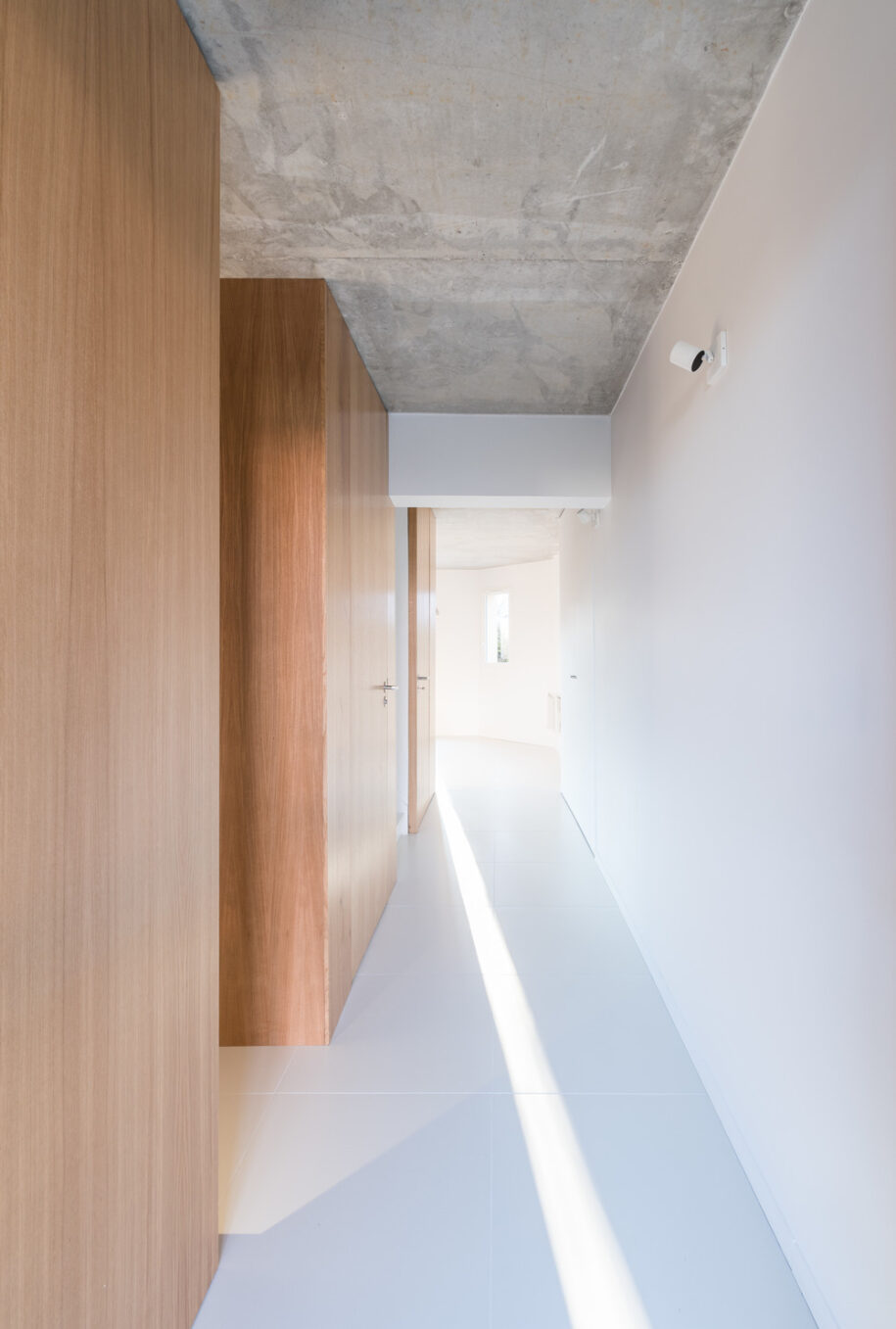 In 2016, Mickaël Martins Afonso won the jury prize at the Festival des Architectures Vives de Montpellier, which led to an invitation to the Taipei Landscape Public Art Festival “Seeing the Unseen” exhibition, organized by the “Blue Dragon Art Company” in Taiwan, to present his award-winning project “Head in the Clouds”. In 2017, the workshop was invited with the collective SHALUMO to produce an architectural installation during the festival Concentrico 3 in Logroño, Spain. In 2018, the workshop was invited two times to present the project “Head in the Clouds,” to the “Robotanica” (Tolhuistuin / EYE) exhibition
organized by “Transnatural Art & Design” in Amsterdam, and “Who do you think you are?” exhibition organized by “TENT Rotterdam”. 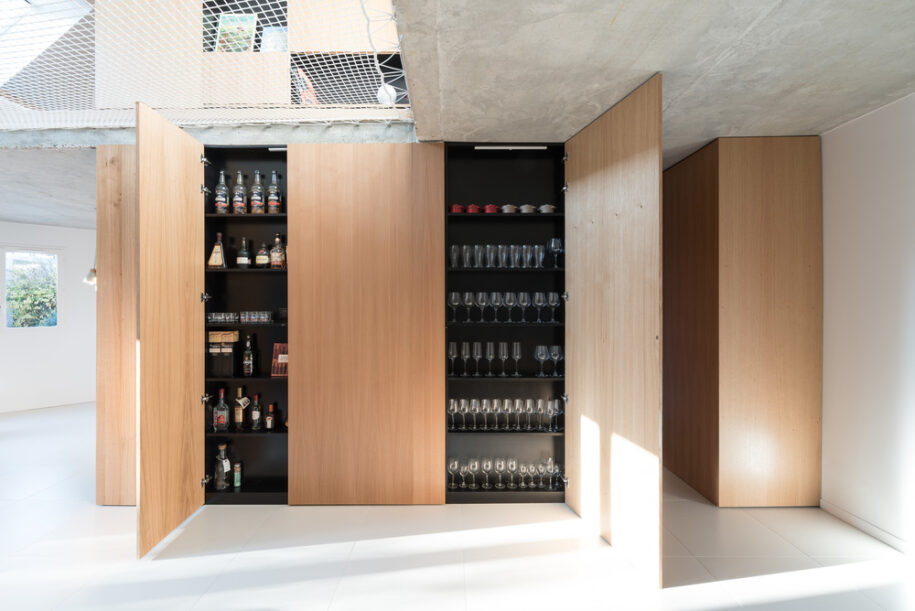 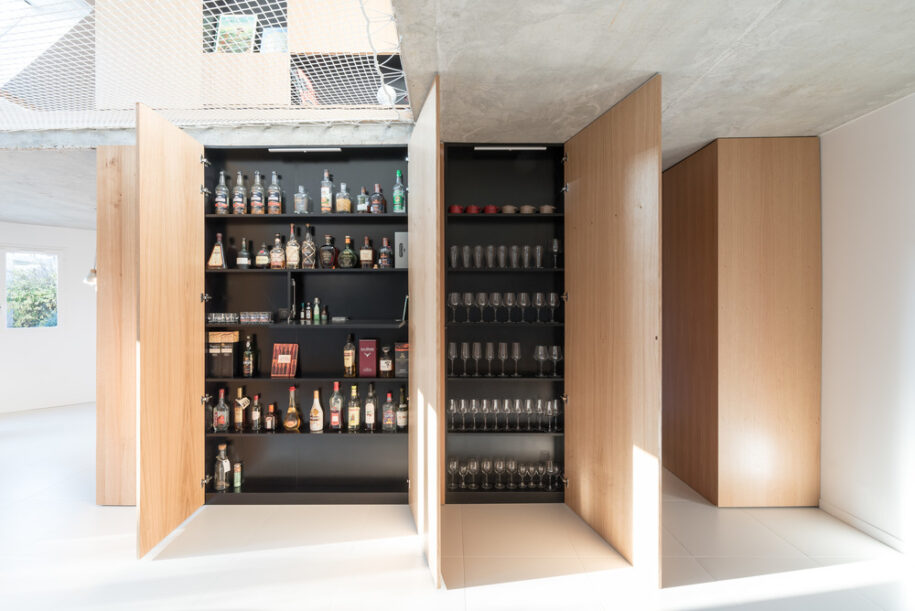 by VALIA KAVALLAArchisearchhttps://www.archisearch.gr/wp-content/uploads/hotel-off-4-370x700.jpg
SHARE THIS PAGE
WITH YOUR FRIENDS