“The Unpragmatic Approach – SKG Edition” by architecture student Christos Ermis Lazarou is a collection of architectural-artistic proposals concerning urban interventions in the municipality of Thessaloniki.

Basing on Rory Sutherland’s speeches, regarding theory of marketing and behavioral psychology, Christos Ermis Lazarou came up with a series of low cost proposals aiming to improve the collective psychology of Thessaloniki while establishing it as a tourist destination in the wider geographical area. Rory Sutherland works as a vice chairman for the British multinational company Ogilvy whose greek branch is interested in privately financing the Orb, projects’s main proposal.

We want a dramatic change to occur in the city. We need tension and exaggeration. These proposals aim to change the collective psychology of Thessaloniki. To bring tourists and investors. To attract artists and people with new ideas. To put it on the map.

Let’s suppose that Thessaloniki was an oily-rich state with petroleum and natural gas providing hundreds of billions of euros to the local economy and the municipality. If this was the case and we wanted to improve life in the city, we would design fancy skyscrapers, huge sport arenas and a futuristic opera house. We would upgrade the road and highway network, complete all the lines of the subway, expand the port, pedestrianize many of the streets of the city, create large parks with ample vegetation and renovate public squares. We would invest in sustainable technology, ecological practices, we would try to make it a zero waste urban center and last but certainly not least we would construct the long forgotten Danube-Aegean canal, which would connect Thermaikos Bay all the way north to Belgrade, Serbia, thus making Thessaloniki the most important commercial port in Europe.

Unfortunately we cannot do this. We simply don’t have the money. So what do we do? For many decades now, the municipality of Thessaloniki has adopted a traditional strategy for the city’s development. This strategy consists mainly on setting small but efficient goals on the long term. Renovating a square, pedestrianizing a road, replacing the street lights, planting new tress. Small changes for the better. An exception to this strategy was the renovation of the new waterfront on the east side of the city. This doing was larger than all of the rest and it really had an impact on the city’s psychology. It impelled citizens to look and focus towards the sea or the sunset of the city and ignore the concrete chaos. 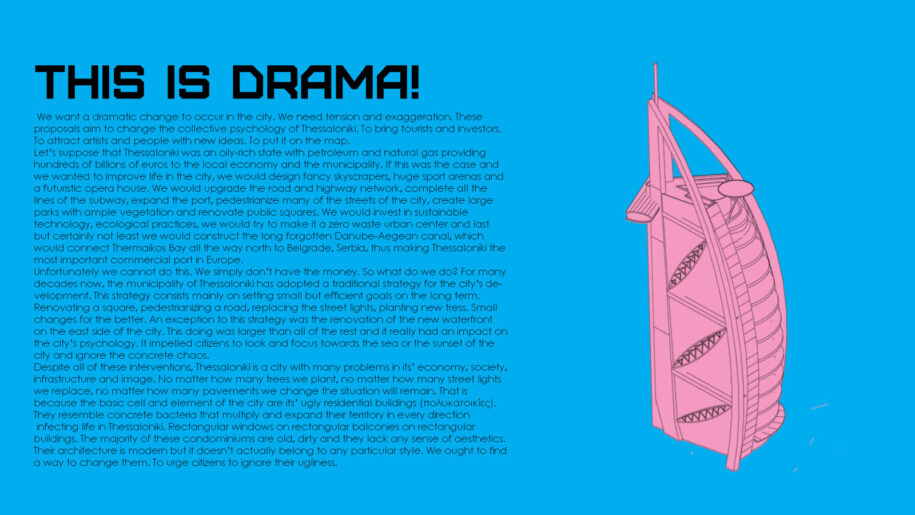 Despite all of these interventions, Thessaloniki is a city with many problems in its’ economy, society, infrastructure and image. No matter how many trees we plant, no matter how many street lights we replace, no matter how many pavements we change the situation will remain. That is because the basic cell and element of the city are its’ ugly residential buildings (πολυκατοικίες). They resemble concrete bacteria that multiply and expand their territory in every direction infecting life in Thessaloniki. Rectangular windows on rectangular balconies on rectangular buildings. The majority of these condominiums are old, dirty and they lack any sense of aesthetics. Their architecture is modern but it doesn’t actually belong to any particular style. We ought to find a way to change them. To urge citizens to ignore their ugliness.

In a hypothetical world, the ideal scenario would be to evacuate the city and demolish it, destroy it to the ground, erase it. Of course this will never and should never happen. However it is rather interesting to wonder: What kind of city would we design if the current one was deleted? 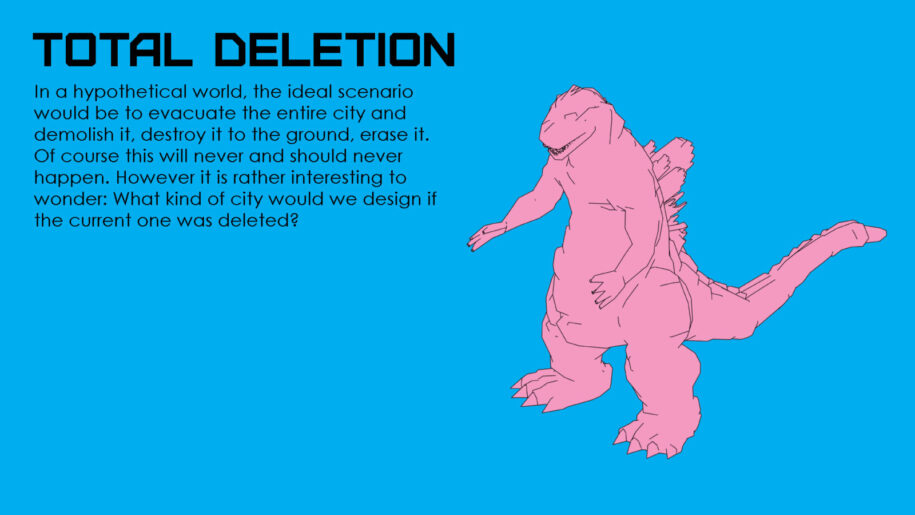 It is now time to address the elephant in the room. Residential buildings are the basic cell of every major Greek city and they are plain ugly, dirty, rectangular and they lack any sense of aesthetics or architectural style.

Our idea to resolve this problem and eliminate this chaos is to paint all of these buildings in brown. This will be done in order to preserve the historical identity of the city and blend harmonically with the few existing monuments. This color is deeply connected and associated with the art and the architecture of the Byzantine civilization and therefore will subconsciously make people consider these buildings, remnants of the past.

One Orb to rule them all

This is the Orb. It is a chrome sphere filled with hot air or helium, floating on the sky. The radius of the sphere is 50 meters. The Orb will function as an airborne antenna emitting signal and Wi-Fi, thus bringing revenue to the municipality. Similar airborne antennas have been proven 40% more financially sustainable while their emission is equal to that of 15 ordinary ground antennas.

The Orb is the main proposal of our effort. During nighttime it illuminates internally like a fiery star. Essentially, it will be an urban capacitor-core that collects the energy of the city and attributes it back in an even more powerful way. Also, as a immaterial source of light, it cancels the power of the materiality of the concrete chaos that is now existing in Thessaloniki. It replaces the White Tower as the main attraction of the area.

To conclude, it completely terminates, without a skyscrapers huge costs, the leveling “valve-limit” of 27 meters high that is now enforced throughout the city and is actually trying to mentally subdue the psychology of Thessaloniki. 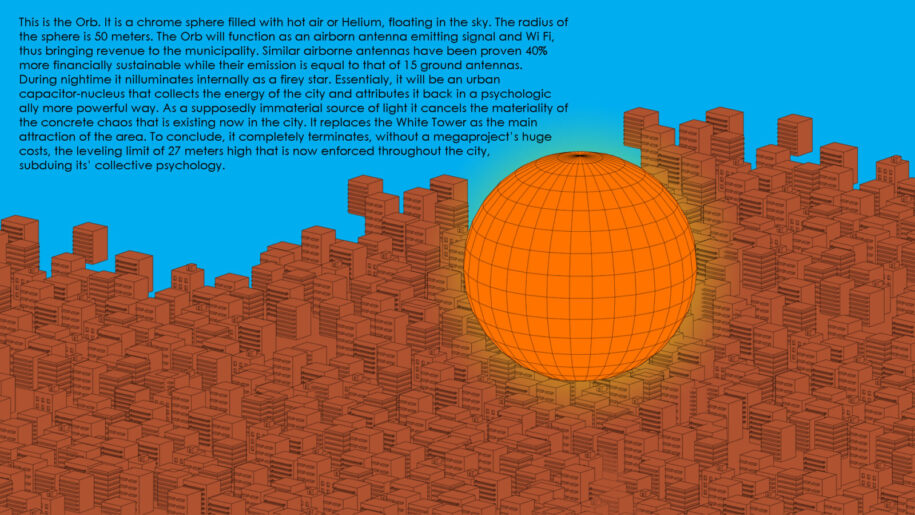 To make sure the Orb will be in accordance with the ecology-sustainability agenda of the 21st century we will have to apply bird friendly stickers on its’ chrome surface.  This way we will protect nearby birds from crashing on the orb. This might seem trivial but according to NBCNEWS.COM, a billion birds lose their lives from crashing on windows in U.S.A. alone annually.

This is a simple idea that would change the face of the city’s waterfront. What we suggest is to install lights underwater by the edge of the waterfront to illuminate the interior of the sea. This idea is quite unusual and can have great results.

Many ecologists would state that the lights would harm marine life. Nowadays however, there are special lights made for underwater use that do not harm fish and other animals.

I can read your mind!

After reading all of my proposals most of you will think that these interventions do not suit the character of the city. Thessaloniki is a town proud of its’ glorious past. Hellenistics, Romans, Byzantines, Ottomans and Jewish people left their mark here. We must preserve this identity. There is one problem though. The city has forsaken its’ past many decades ago. This is not Rome or Venice. Once during the past Thessaloniki was full of eclecticist, neoclassical and ottoman buildings that reflected the beauty and the heritage of its’ different ethnic communities. Today the vast majority of these buildings have been demolished and their ruins lay below the infamous residential buildings. The few monuments that have been saved are now standing squeezed inside the concrete jungle. For this reason we should try to change our mindset and focus on the future rather than the past. It is unfortunately too late to revive the charm of the old Thessaloniki.

To conclude I would like to state that a big part of the charm and beauty of the old Thessaloniki was the progressiveness of it’s’ citizens. 100 years ago Thessaloniki was the largest city in Greece and it had a big economy full of businesses, commerce and industries. The owners of these companies were people who knew that success requires risk and boldness. They wanted new ideas, new technology and a new reality. I personally believe that if they were here with us they would advise us to embrace change, progress and dare. 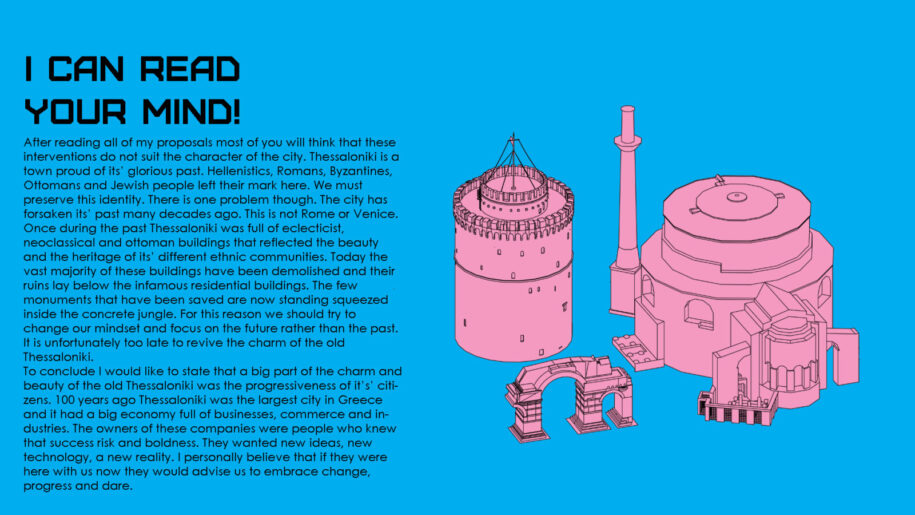 You didn’t know that!

On March 30 1885, French engineer Gustave Eiffel published his first plans for 300meter tall iron tower that would be the main landmark for the Paris Exposition Universelle of 1889.  The name of the tower would be “Tour d’ Eiffel” (Eiffel Tower). From the moment the plans were published, it became apparent that the public opinion was displeased with the idea. The protests reached their pick in 1887 when 300 academics, architects, engineers, artists, sculptors, poets, scientists and many more acclaimed personalities from France and the rest of the world signed and published a text named “Artists against Eiffel Tower”.

The text among other things mentioned: “we protest with all our strength, with all our indignation in the name of slighted French taste, against the erection … of this useless and monstrous Eiffel Tower … To bring our arguments home, imagine for a moment a giddy, ridiculous tower dominating Paris like a gigantic black smokestack, crushing under its barbaric bulk Notre Dame, the Tour Saint-Jacques, the Louvre, the Dome of les Invalides, the Arc de Triomphe, all of our humiliated monuments will disappear in this ghastly dream. And for twenty years … we shall see stretching like a blot of ink the hateful shadow of the hateful column of bolted sheet metal. Some people criticized the building even harsher, calling it “tragic street lamp”,  “chimney skeleton”, “unfinished and deformed iron mass”, “factory funnel” etc. In the end the tower was completed and opened on March of 1889. The negative opinions faded in front of the eventual result. The tower was adored and it received 2 million visitors during its’ first year. Today it is one of the most famous structures in the world and it is considered a symbol of French taste and beauty. 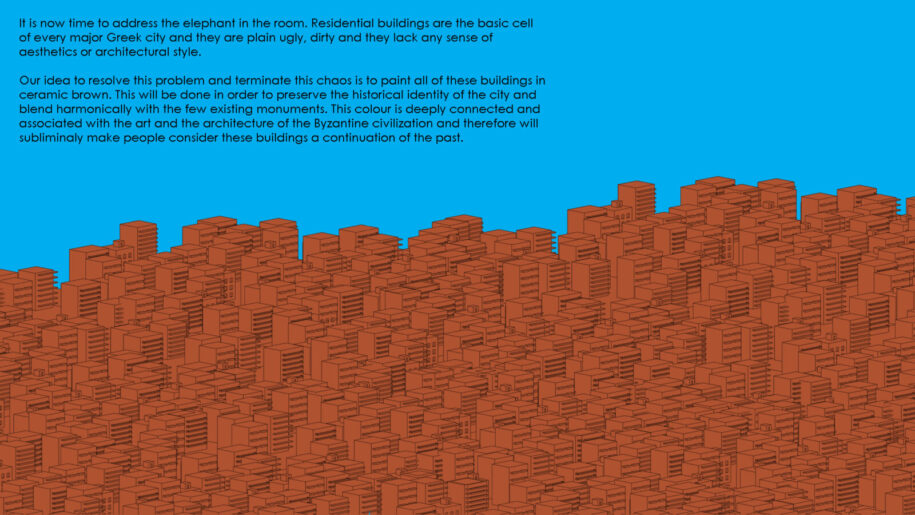 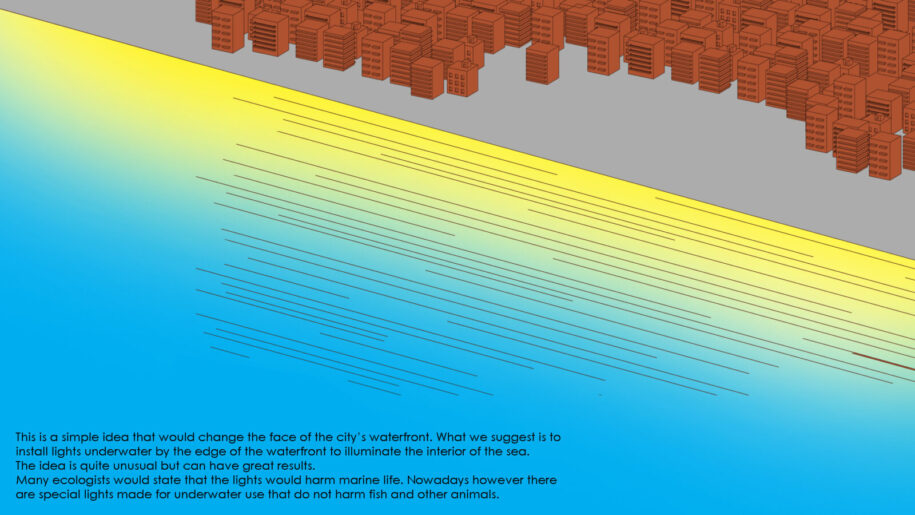 One Οrb to rule them all 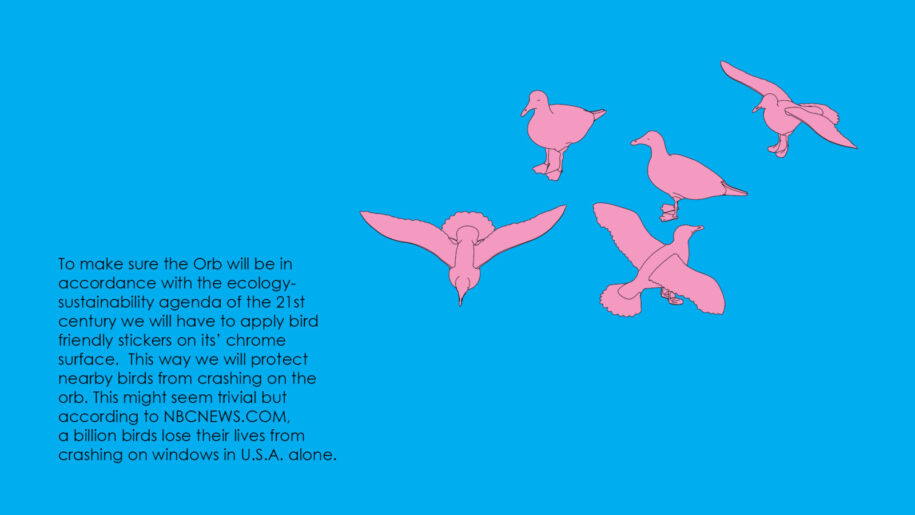 I can read your mind!

You didn’t know that! 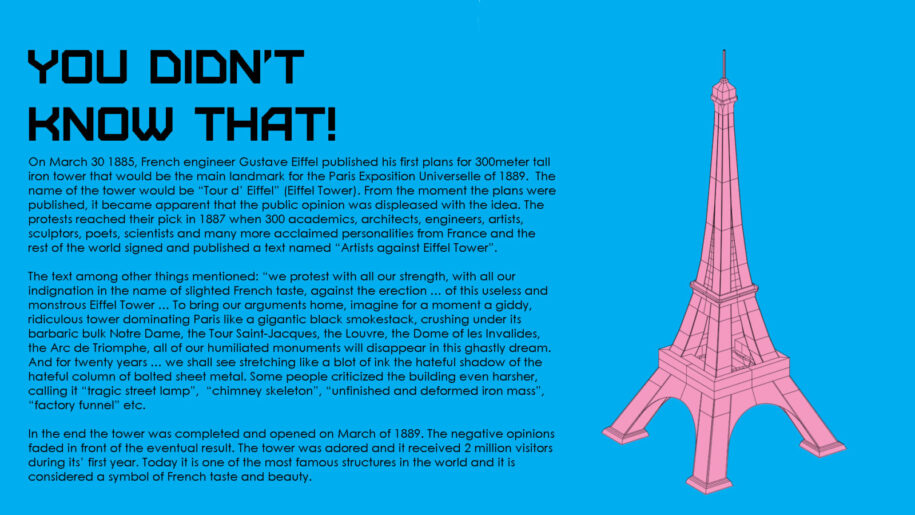 
READ ALSO: From barriers to connections: architectural interventions aimed at the revival of the urban center of Chania | Diploma thesis by Orestis Papavasileiou & Eleni Pilatou
0 COMMENTS

Towards a pre-industrial landscape syntax: the illustration of the Cretan mills | Research thesis by Emmanouil Nikiforos

Environmental center for information and recuparation of the Caretta-Caretta at Laganas Bay Zakynthos | Thesis by Palaiothodoros N.-M.