Natural ecosystems adjacent to cities are amongst the most impacted and delicate environments, threatened by the combined effects of climate change and human intervention.  The following diploma project addresses the case of Pikilo Mountain, that binds the western boarder of Athens, by presenting its current ecological sufferance and exploitation, and proposing a strategy aimed at the mitigation of the anthropic and environmental threats.

– text by the author 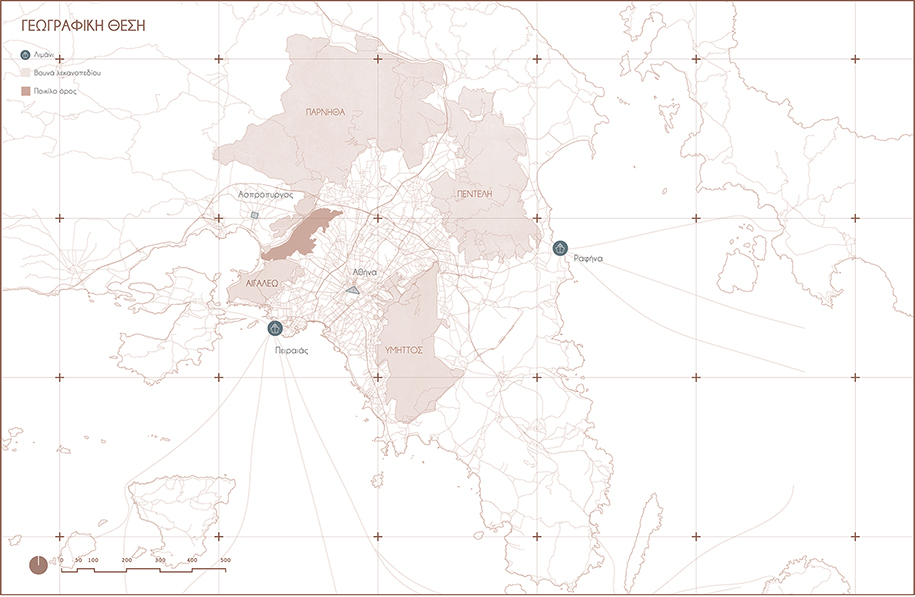 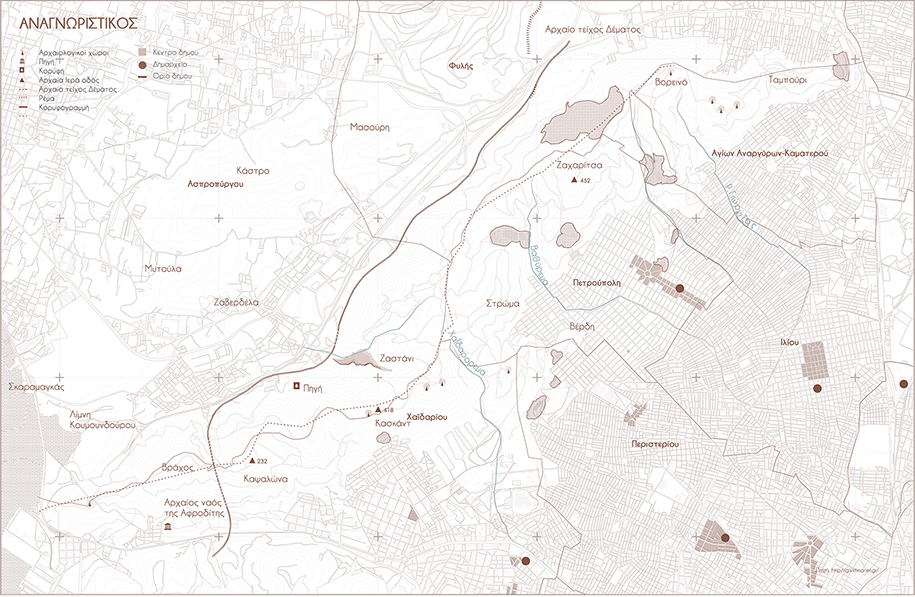 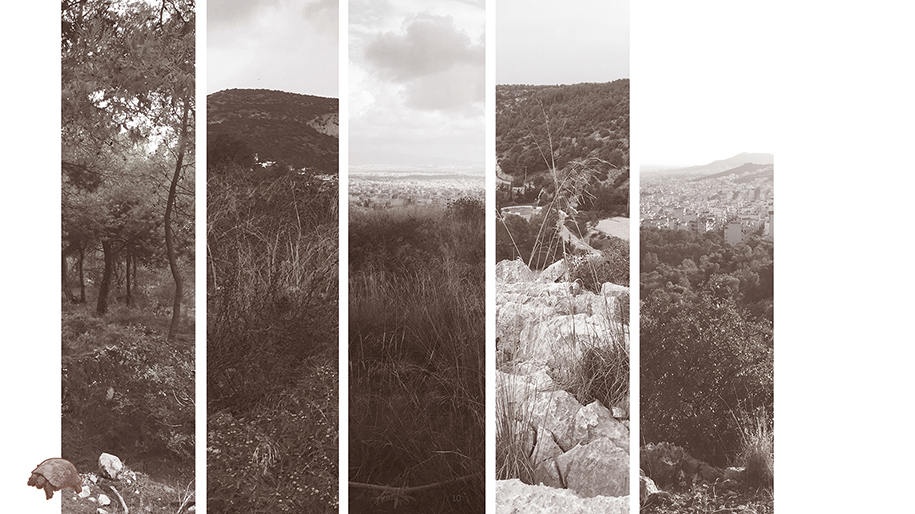 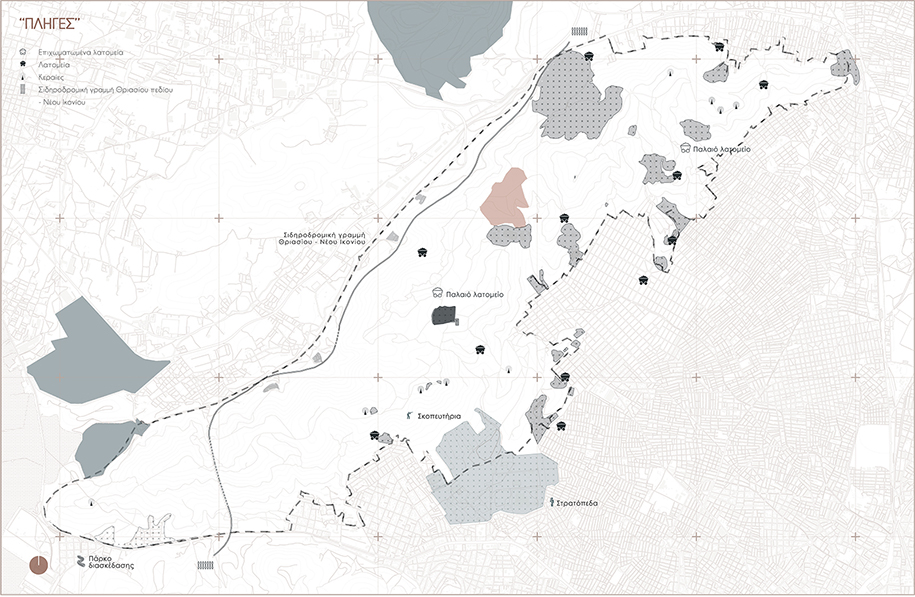 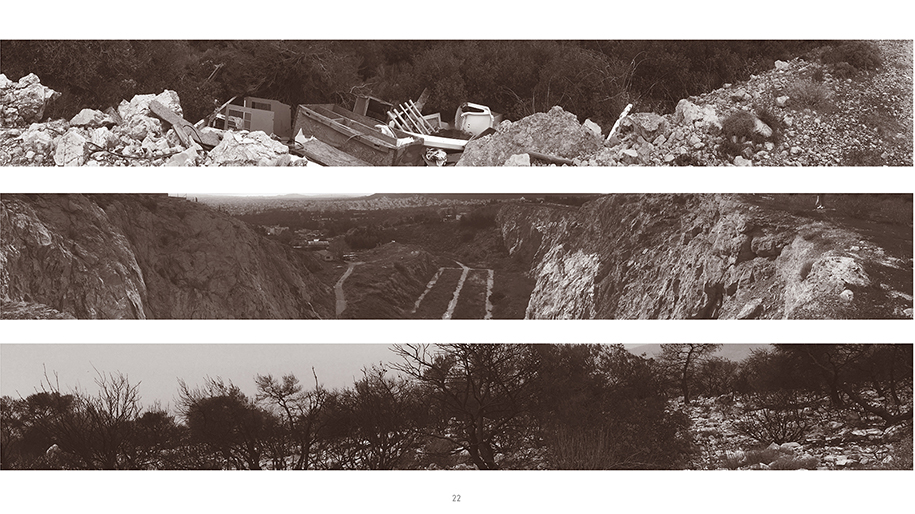 The primary phase of this thesis focuses on the mountain’s current condition and determines the exact factors that contributed to its sufferance. The mountain’s lack of connection to nearby ecosystems, the exploitation and misuse of its quarries, the neglection of its ecological and cultural heritage sites, the poor connectivity and unregulated expansion of the adjacent urban fabric emerge as crucial issues that ought to be addressed. 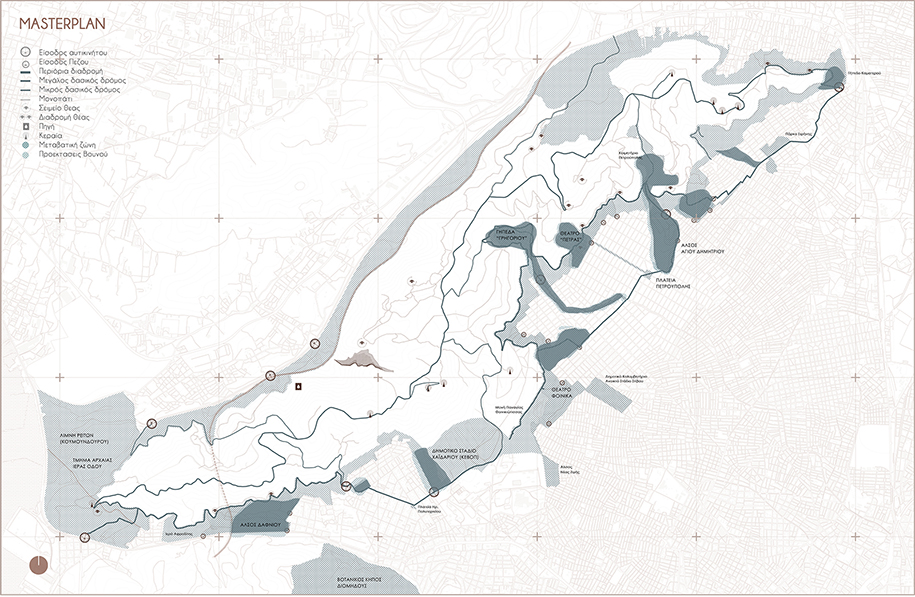 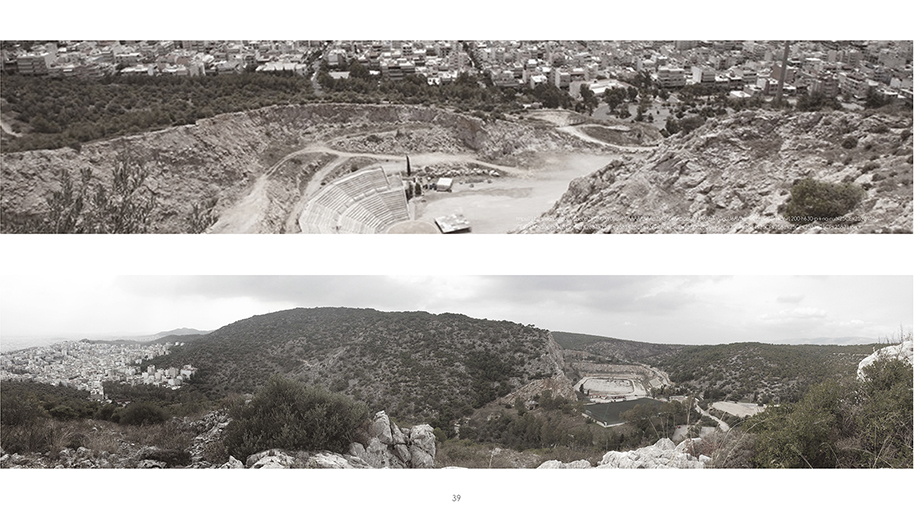 Consequently, the masterplan proposed a transitional zone with passive recreational activities, designated by a newly established trail that passes through existing cultural conductors, like old quarries and parks, therefore allowing the mountain to infiltrate the urban fabric. This concludes to the creation of a “necklace”, consisting of beads. The main goal of this strategy is to develop integration methodologies in order to ameliorate the impact of anthropic intervention, acting as a nature based defense, to establishing Pikilo Mountain as a sustainable and resilient ecosystem. 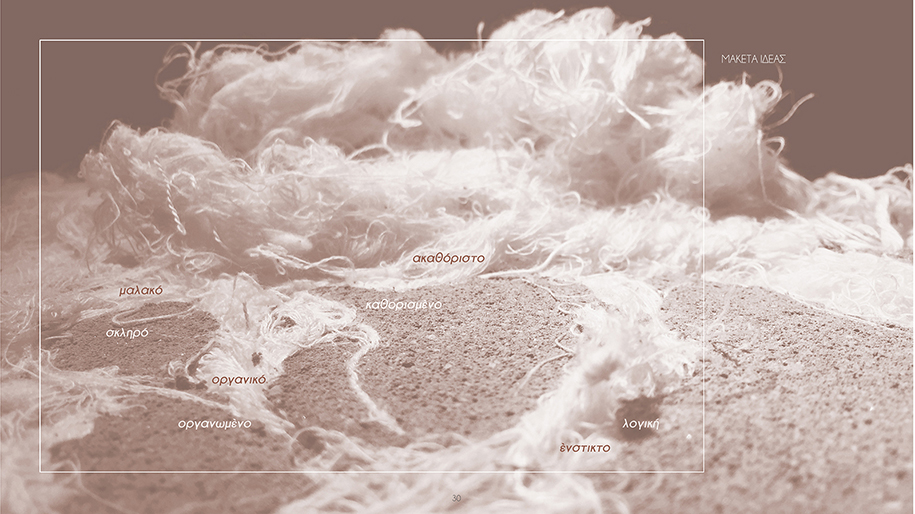 The integration methodologies, spatially focused on the beads, implement the notion of diffusion of natural elements into the urban fabric. The main goal is to establish the natural elements as a prominent factor of the urban web, thereby making them an integral part of the residents’ life. This connection was to be accomplished not only as a sensory experience, but it ought to manifest as an irreplaceable part of the urban reality. The sterilized urban logic ought to be engulf by instinct. 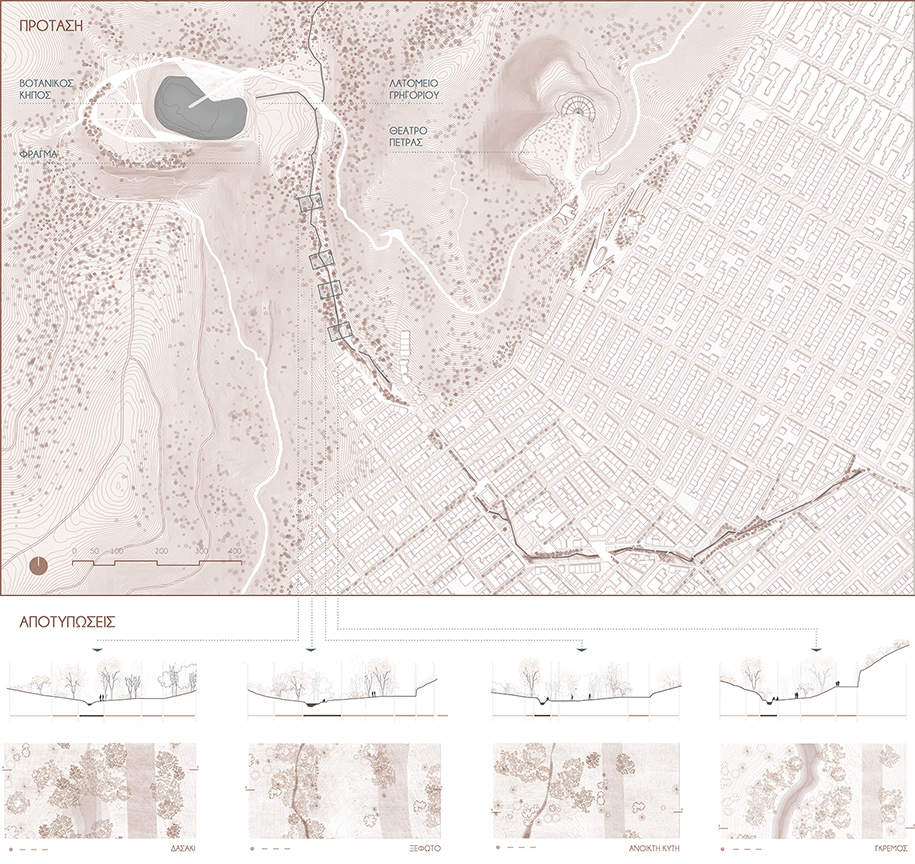 “Vathyrema” Stream’s restoration. Is the linking element between the mountain and the city. For this reason, the proposal includes its riverbed’s restoration within the urban fabric as part of a natural walk.
“Gregoriou” Quarry. The proposal includes the construction of a dam, the formation of a lake and an outdoor environmental information center. The dam will provide controlled water flow and the water surface will minimize the quarry’s role as a heat convector.
“Marasli” Quarry. A reinforcement of its cultural character is proposed by the installation of a small museum in the furnace and outdoor sculpture exhibitions, concerning the mountain and its quarries. 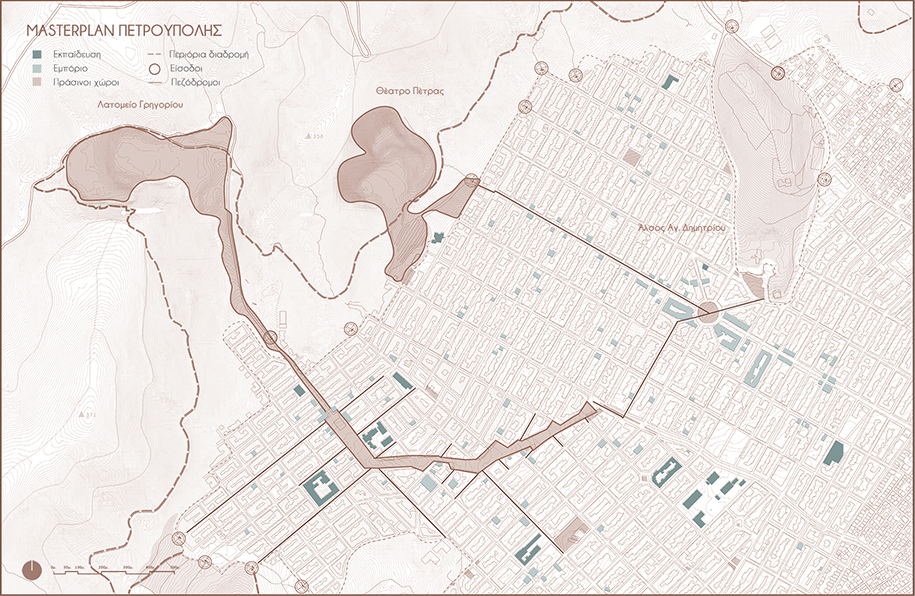 The existing open riverbed had to be investigated to define the design tools and form a typology to open the stream in the contemporary built environment. Thus, the topography, the water and the vegetation are the 3 elements that emerged as the design tools, whose different arrangement concluded in the development of the landscape typologies in the board above.

Through this process, these 4 distinct typologies – the slope, the clearing, the forest and the hill – are transferred into the urban fabric, and materialized through the combination of studies related to the local vegetation, existing activities, surrounding land uses and level of naturality.

The restoration of the stream is based on two design systems, a strict grid that conformed to the adjacent streets, and an organic system, shaped by the water flow. The grid system hosted a buffer zone, high vegetation, recreational activities, related urban equipment and the circulation system, while the organic one included the river bed and secondary pedestrian circulation. 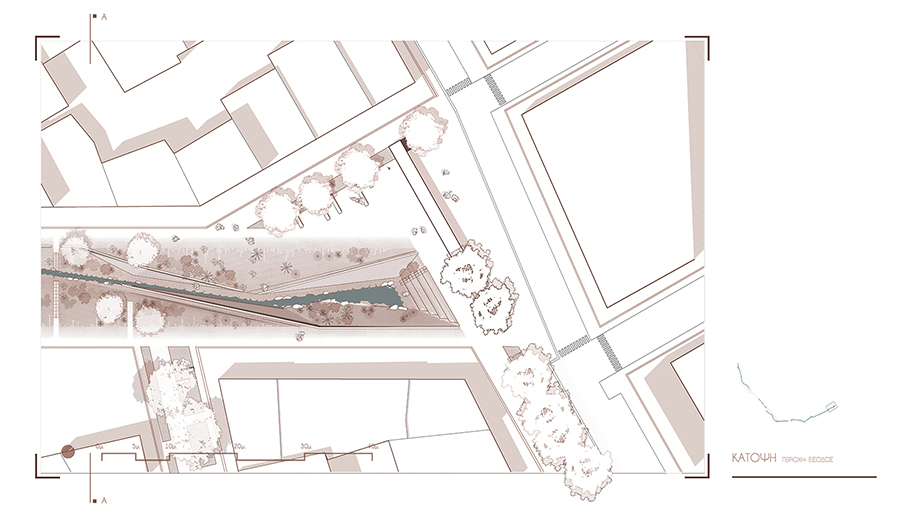 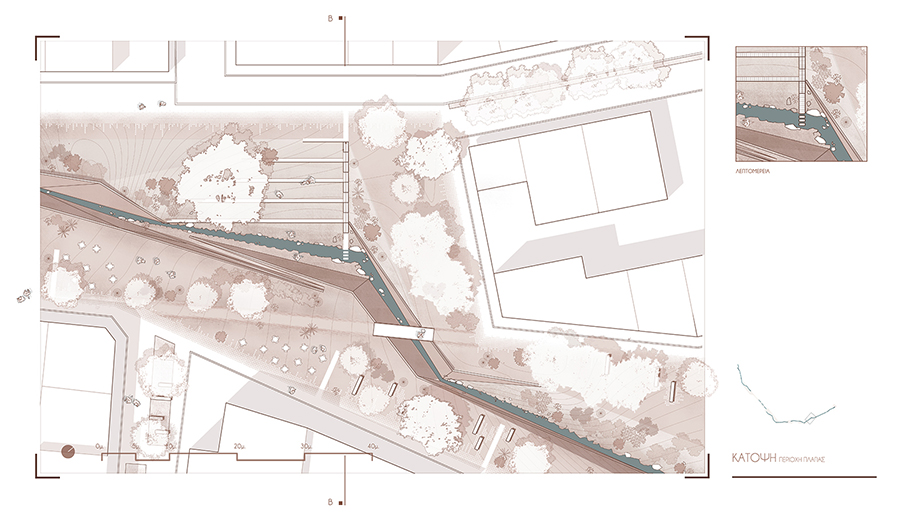 The diffusion is explored at a close scale, through the introduction of a transitional zone consisted of limestone cobblestones, that gradually decrease. It functions as buffer zone for the urban web, hosting the circulation and ensuring access to adjacent buildings. The crossing of the stream can be accomplished in three ways; directly, through overhead bridges on the level of the city, or indirectly, on the level of the water, through the expansion of the buffer zone, or through a system of ramps. the overhead bridges facilitate the pedestrian’s circulation regardless of the water surface level. 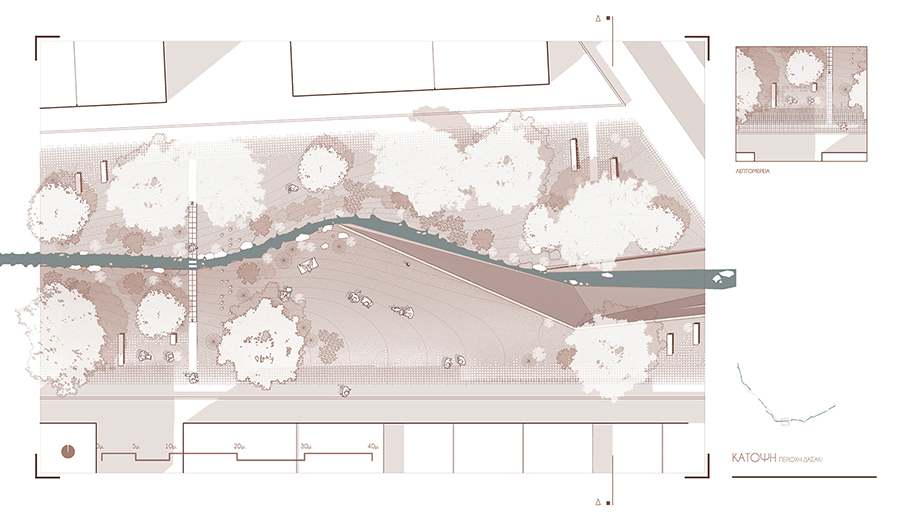 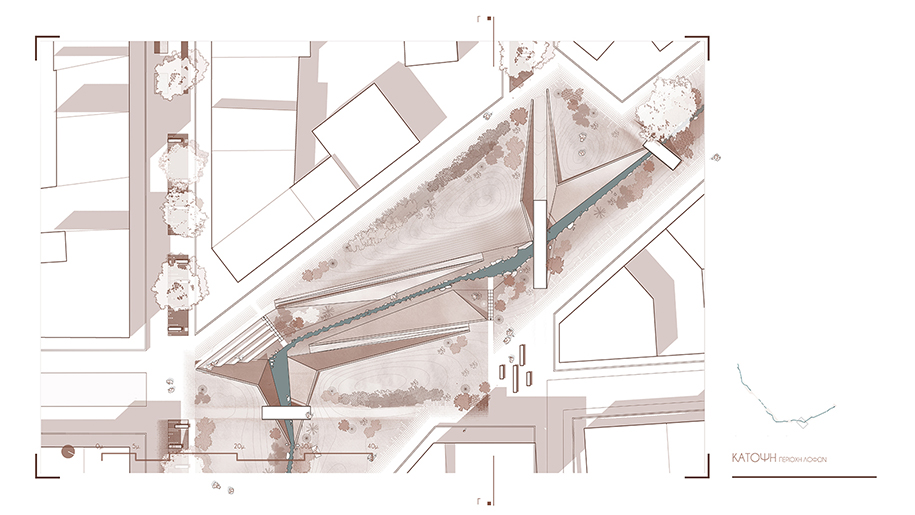 The riverbed is restored following the existing topography. Its form resembles a sculpture consisted of folding triangular surfaces. Sustainable and natural materials are used, aiming to reduce the environmental footprint. 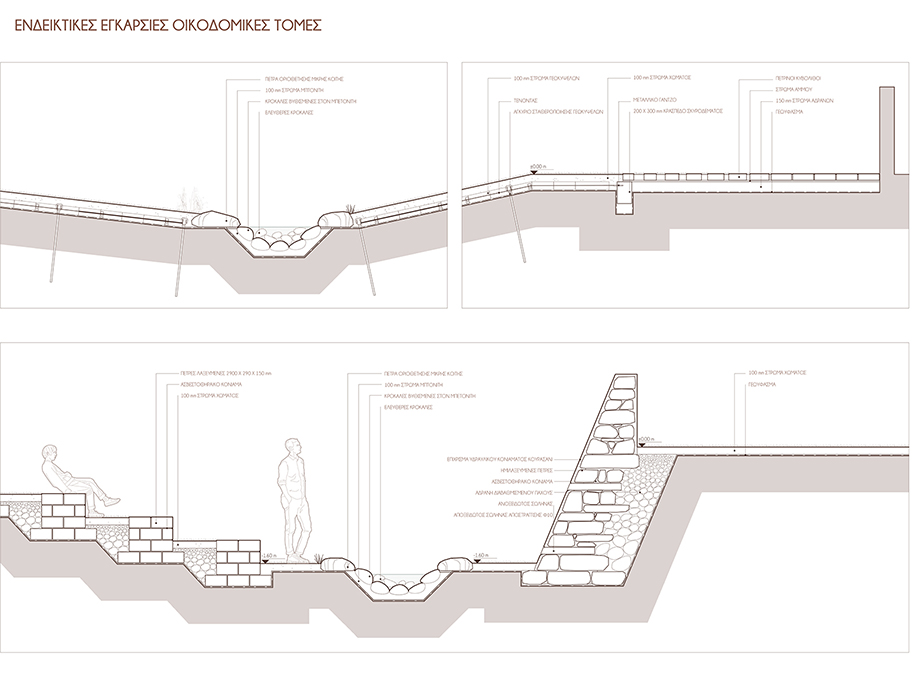 by MELINA ARVANITI-POLLATOUArchisearchhttps://www.archisearch.gr/wp-content/uploads/Dwelling-in-Boundaries-final-beaufor-diagramm-gif-370x700.gif
SHARE THIS PAGE
WITH YOUR FRIENDS