The Dilan hotel. Renovation by ILAN Architecture Studio. It features eleven suites and apartments of a renovated 1930s building dedicated to travelers who seek more than an ordinary hotel room. Throughout the restoring process, the architect’s aim was to reinvent a space that was abandoned for years, convert it into an urban sanctuary for its guests, while keeping the history of the building distinct.

The Dilan is a new hotel situated at the area of Acropolis, in the center of Athens, in a quiet street and at the same time near Athens’ most important archaeological sites. 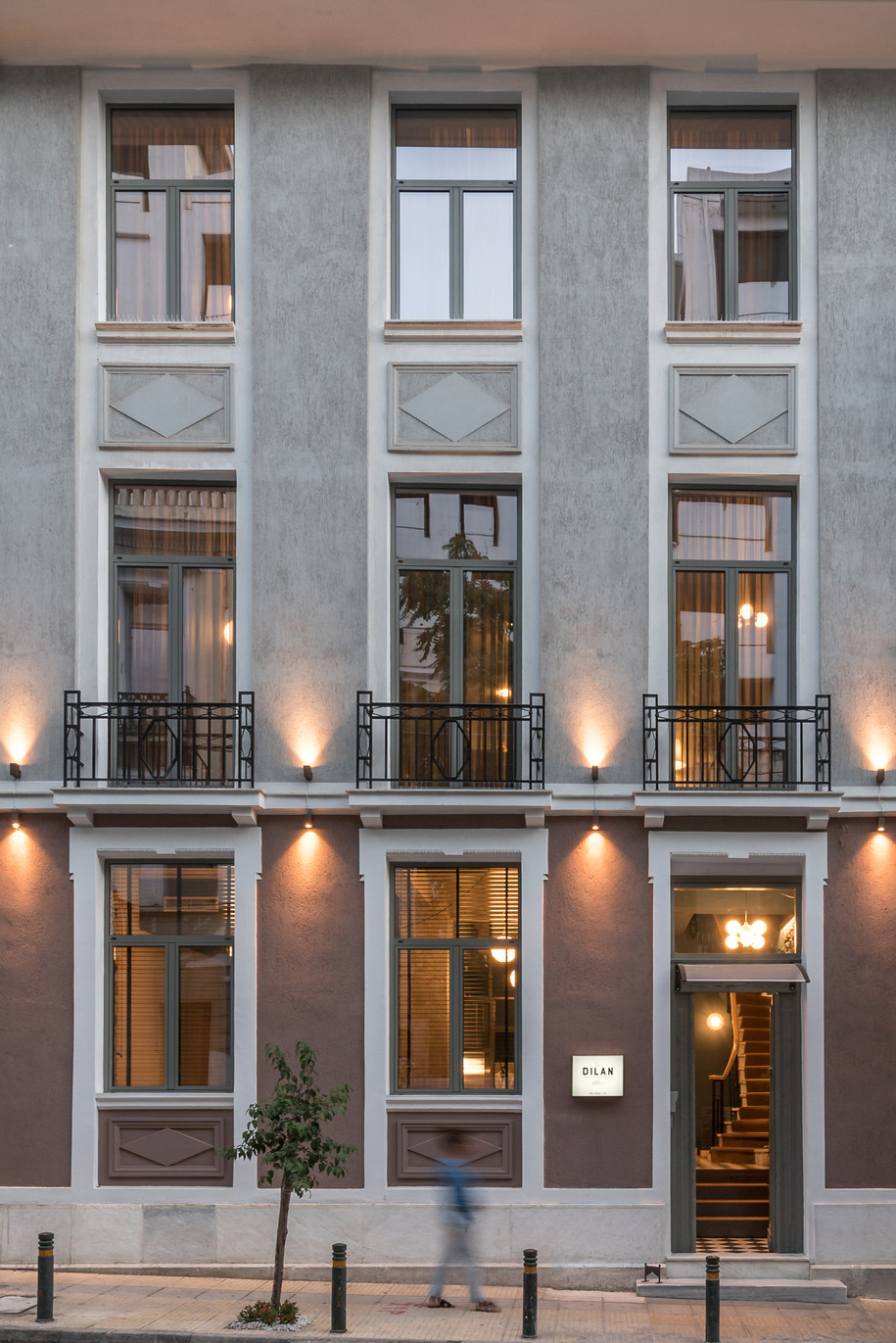 It features eleven suites and apartments of a renovated 1930s building dedicated to travelers who seek more than an ordinary hotel room. 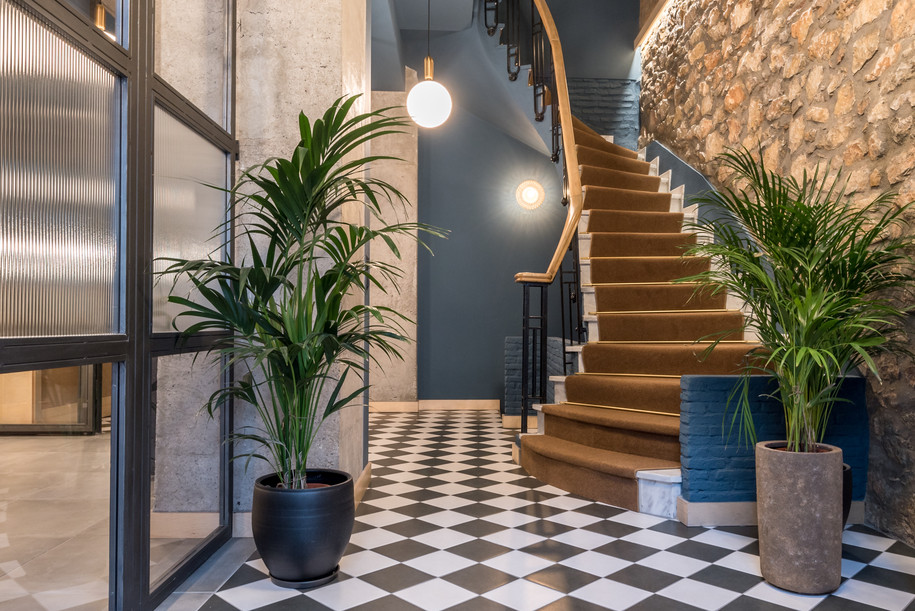 The building was completely restored and renovated by Athens based architect Ilias Antoniou, behind ILAN Architecture Studio in order to convert it into a hotel managed by him and his family. 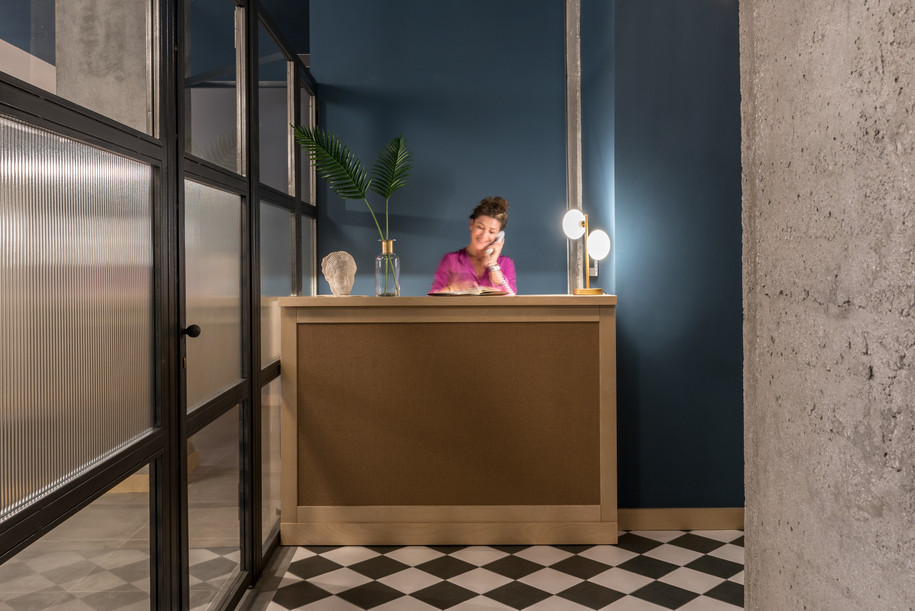 Throughout the restoring process, the architect’s aim was to reinvent a space that was abandoned for years and to convert it into an urban sanctuary for its guests but also keep the building’s history directly distinct. 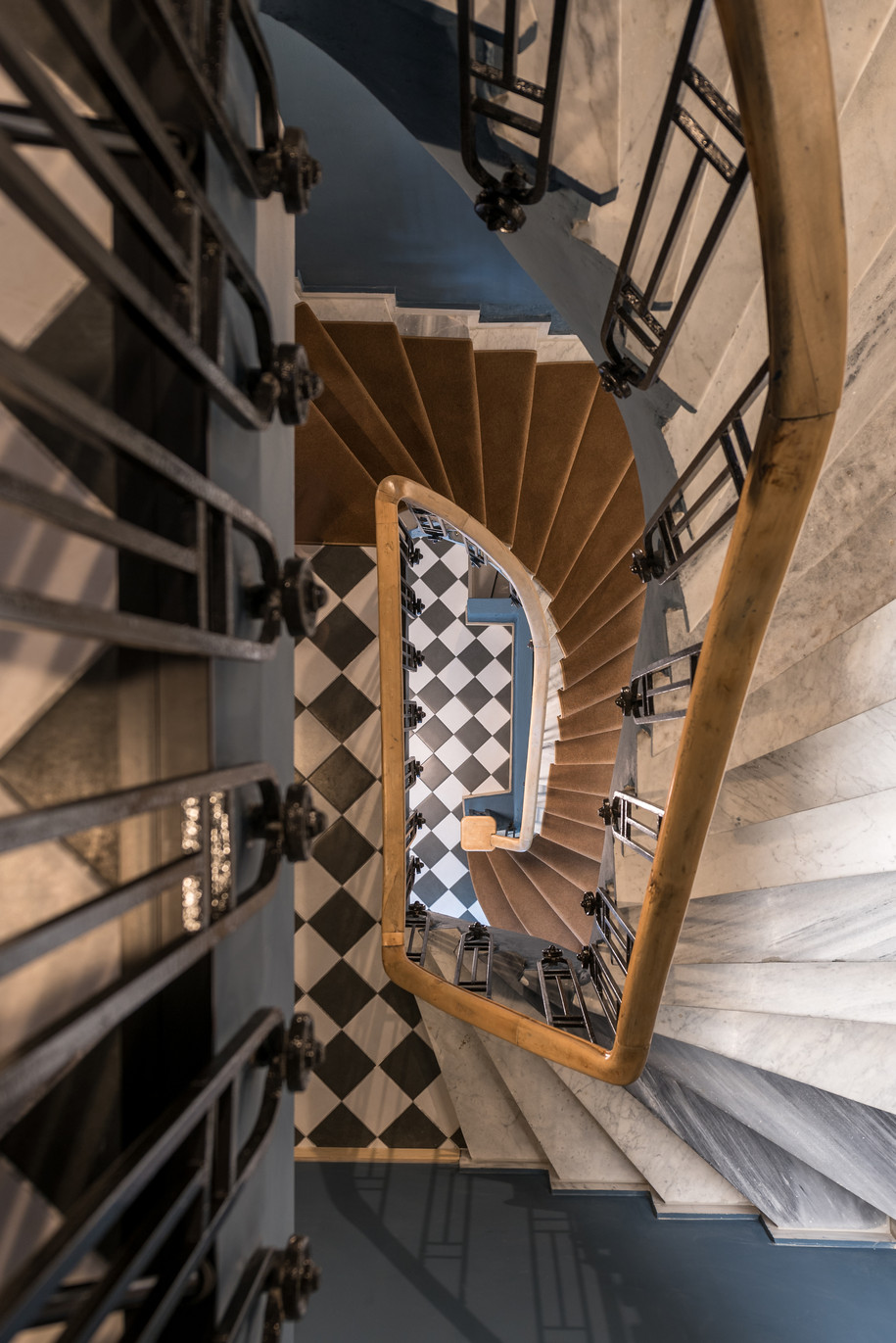 Historic stone walls dating back to the 1930s were carefully restored and left exposed. The hotel’s spacious rooms with four meter high ceilings, in combination with tall windows achieve optimal lighting giving the guest a sense of freedom. 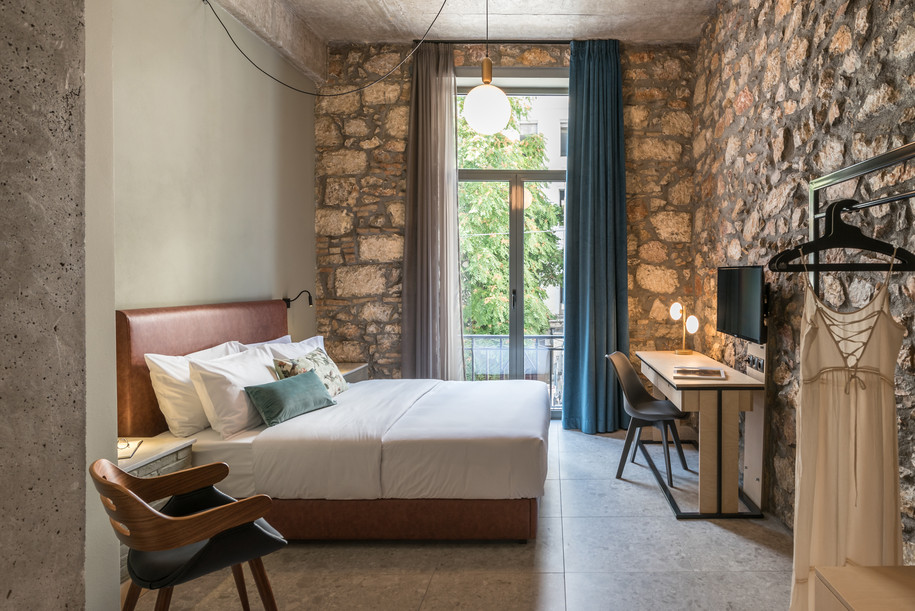 The guest rooms were designed based on the preexisting layout of the building structure.

In the early 20th century, houses were built based on functionality which led to a discovery of an asymmetrical pattern of columns throughout the building.

The original unorthodox layout of concrete columns and beams were restored in order to conserve the structure of th building, as well as for supporting an extra added floor. 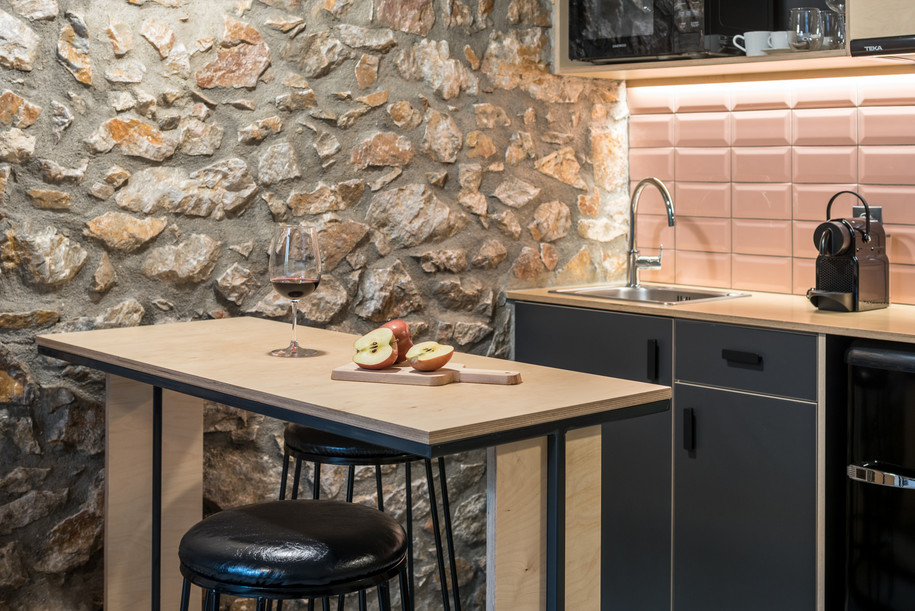 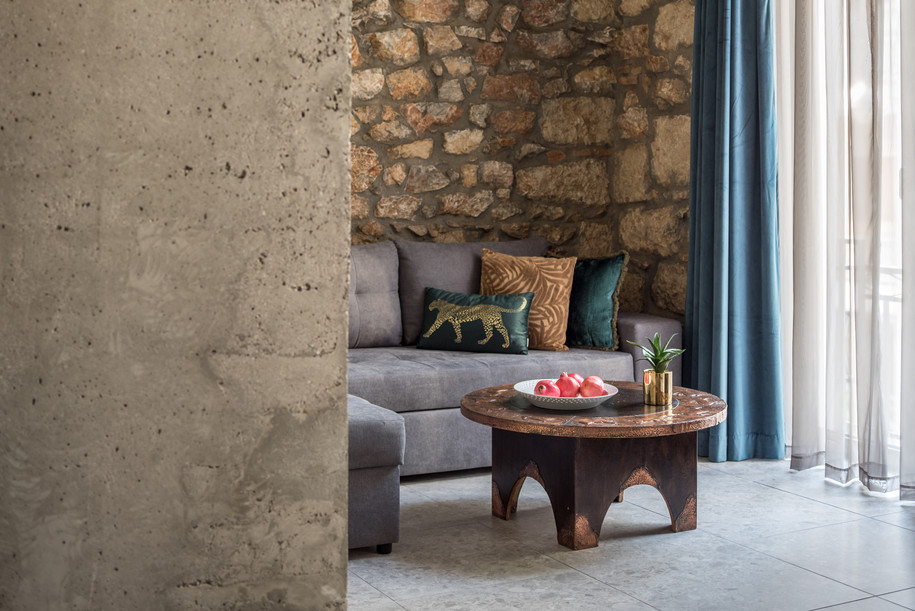 The columns are visible throughout the building and rooms, serving as a reminiscence of past times. 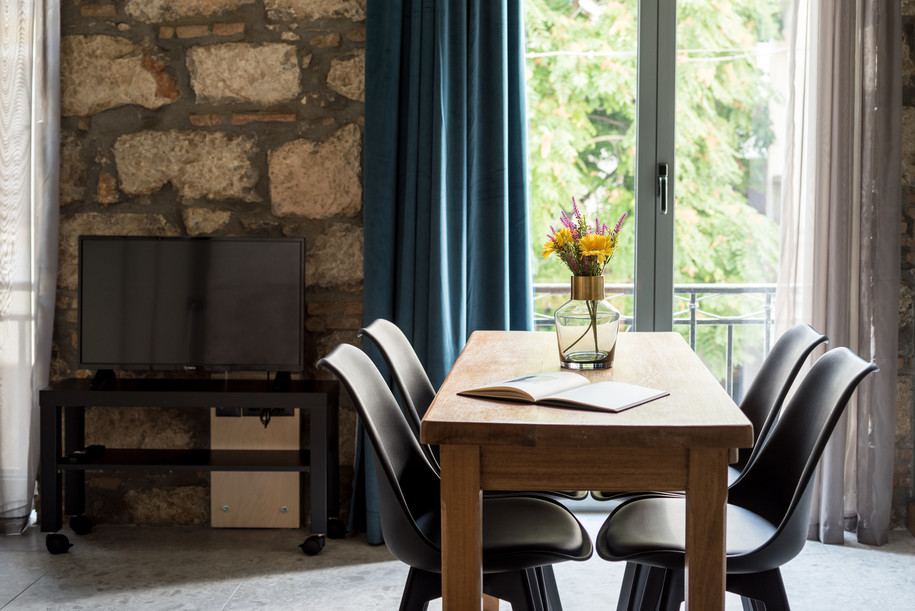 The majority of furnishings were custom made and designed in order to enhance the presence of the building’s natural materials. 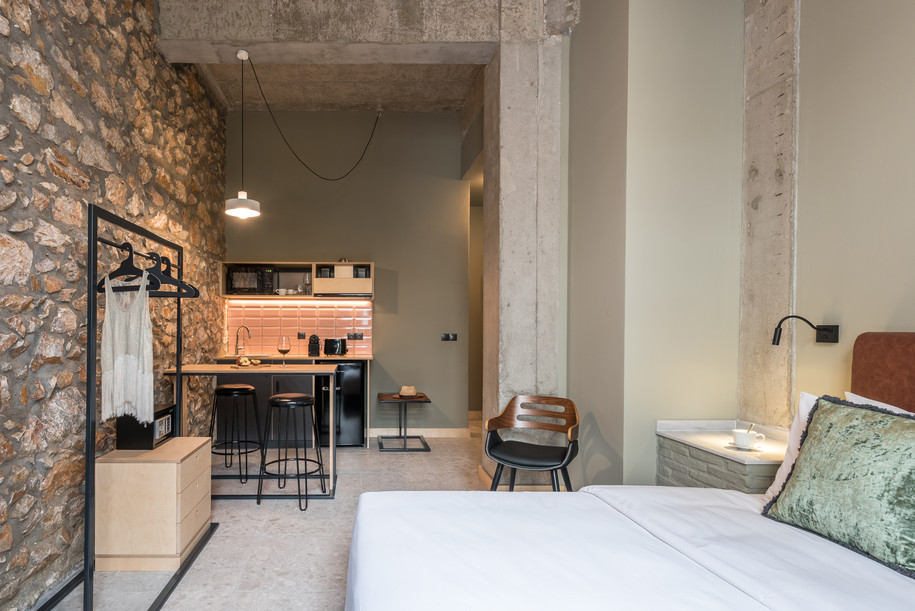 Refined textiles and decorative details contrast with the raw nature of the building. The exposed stone walls along with concrete columns combine materials of the past and future, offering guests a unique accommodation experience. 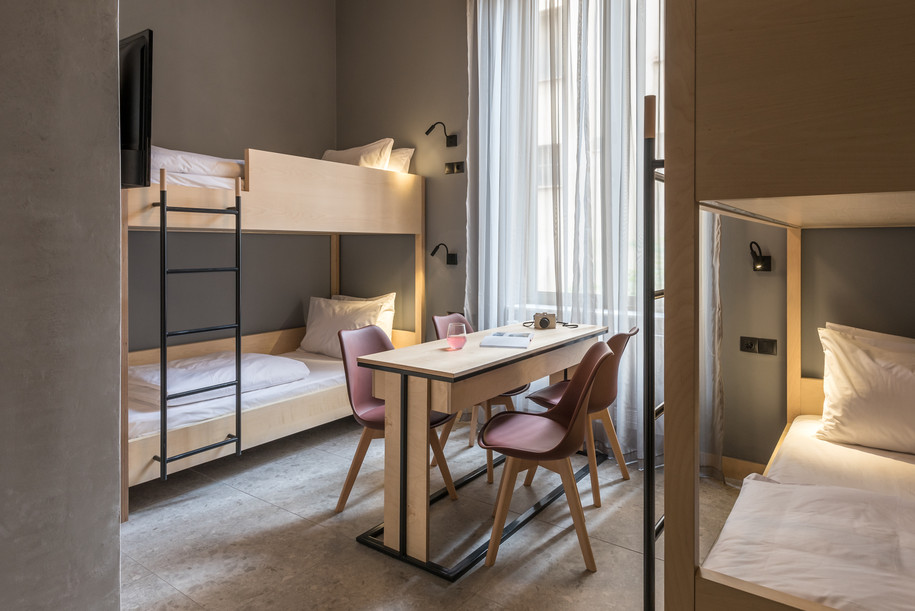