Mira Me Athens Boutique Hotel by a+ architects. In one of the emblematic points of Athens, low at 118 Ermou Street, the old typical Athenian house of 1925 with the commercial one on the ground floor is completely reconstructed in an urban boutique hotel. It consists of two restaurants and seven rooms. The main goal of the office was to restore the building to its original form, to recreate the image of a mansion of the Athenian interwar period, but also make a connection between the past and the present. 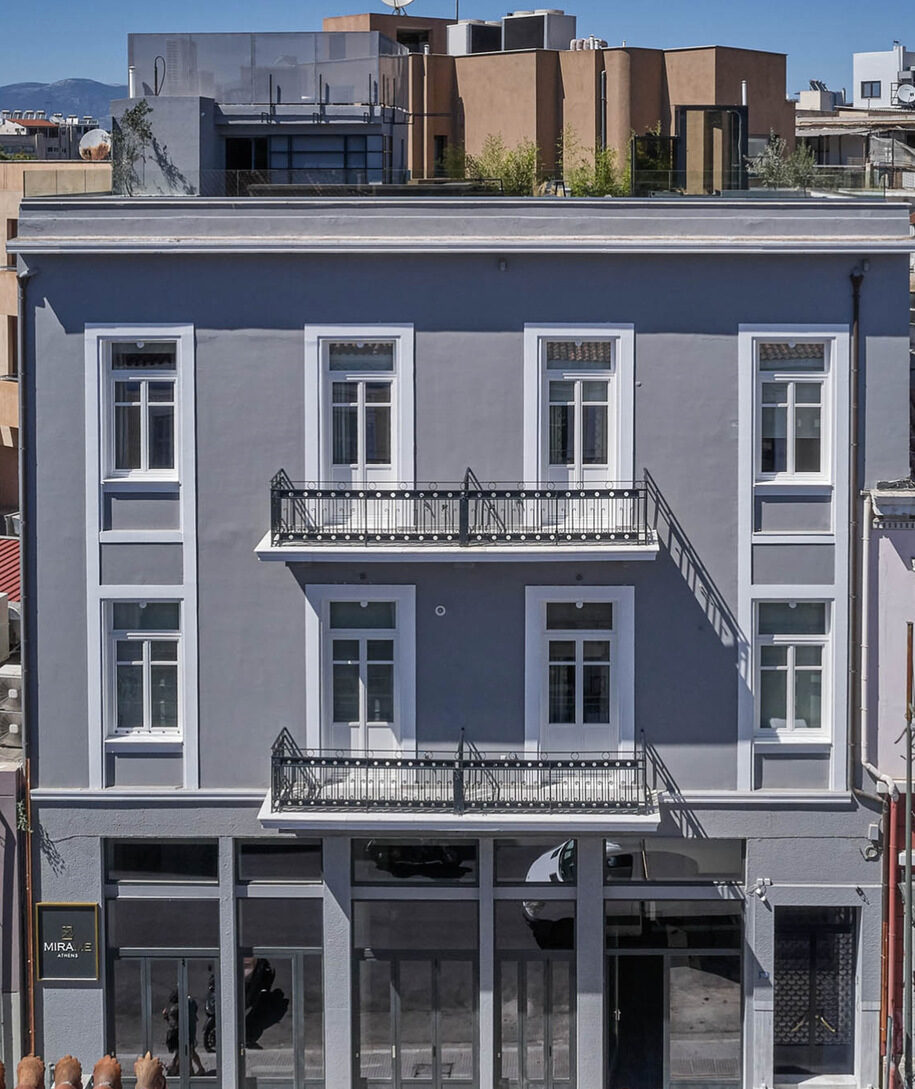 The building was statically reinforced and modernized to support its new use as an urban boutique hotel. Great attention was paid to the preserved appearance, in order to preserve and highlight the architectural identity of the building. We paid special attention to the study of external lighting and highlighting the volumes of the building. In all places one sees architectural and decorative elements of Athenian history. 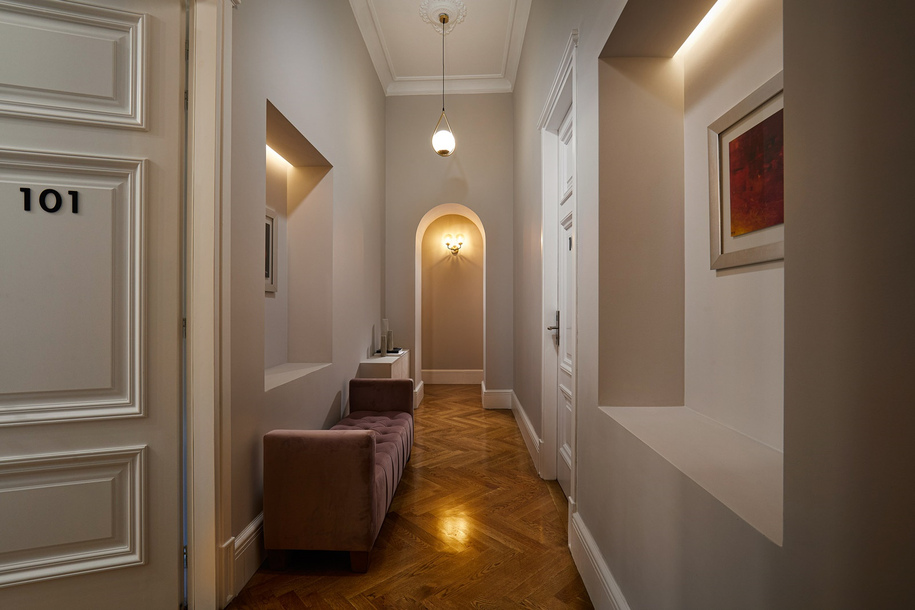 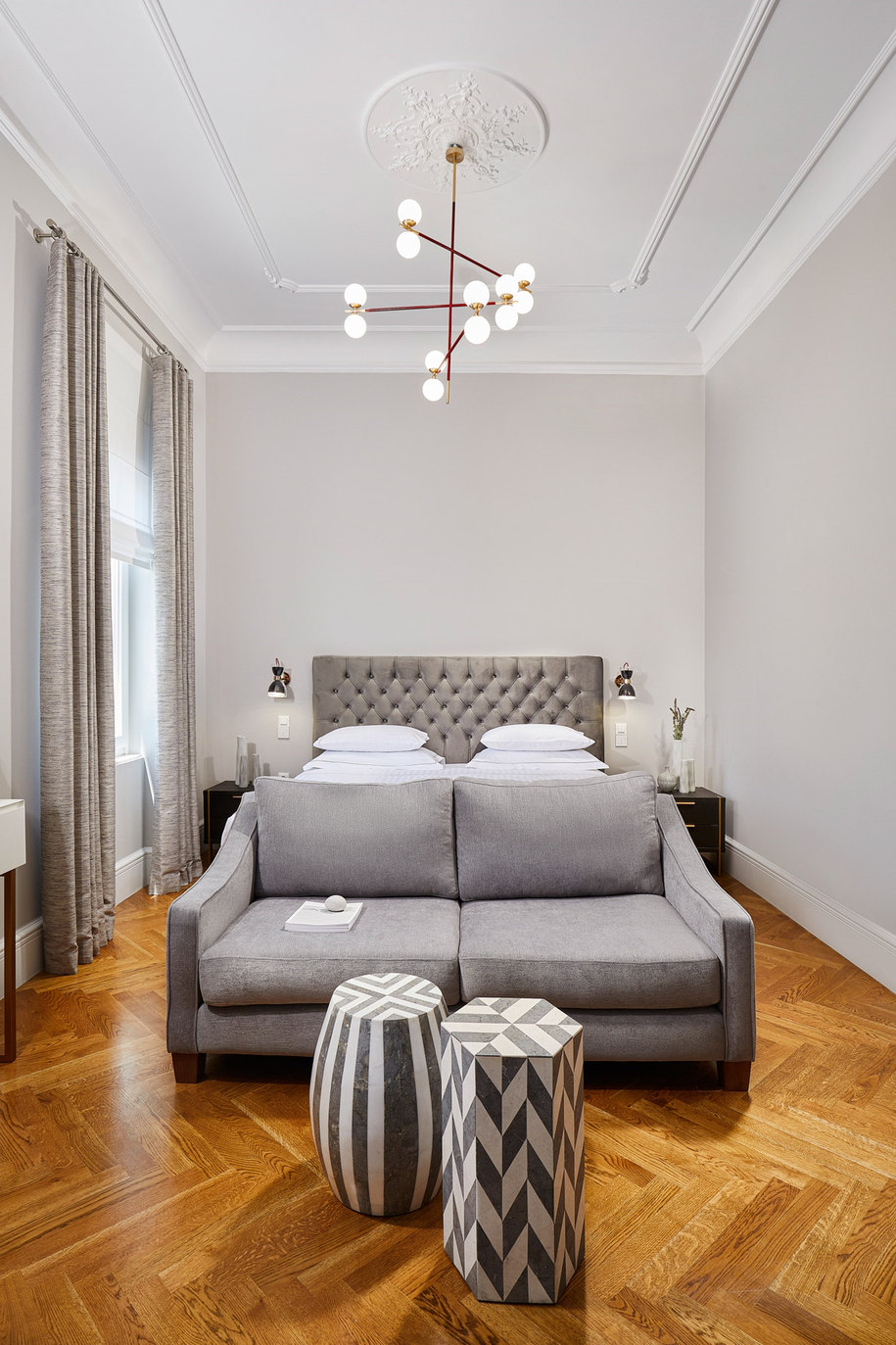 The entrance and the staircase were in excellent condition and the marbles were simply cleaned and the wooden staircase was painted with a special color – style in anthracite shade. The staircase ended on the second floor and for the needs of the restaurant on the roof was built a modern aesthetic and construction staircase with metal, wood and glass. Probably one of the most beautiful rooftops in the city, within walking distance of the Acropolis and other monuments. Here the decorative tones were kept low with simple design furniture and discreet lighting leaving the leading role in Athens. 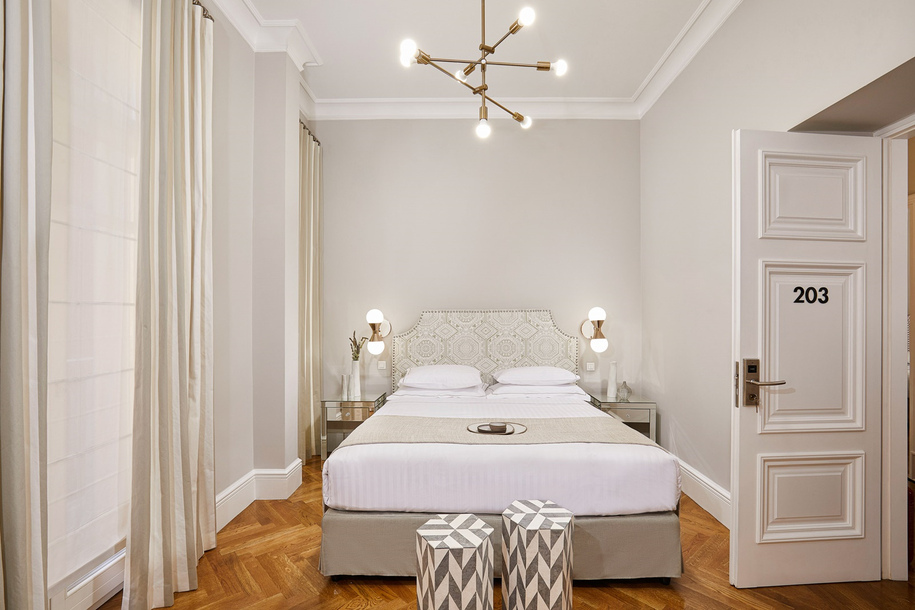 The seven rooms on the two floors are divided into three decorative types. And here the idea was to return the rooms to their original form. The floors were covered with wooden French herringbone as well as great attention was paid to the plaster decorations and the roof rosettes that were reconstructed. Modern lamps make the upset. Organza, linen and velvet dress windows and furniture, many of which were created especially for the occasion. Since the building has no shutters, a special automatic blackout system was designed for the needs of the visitor. 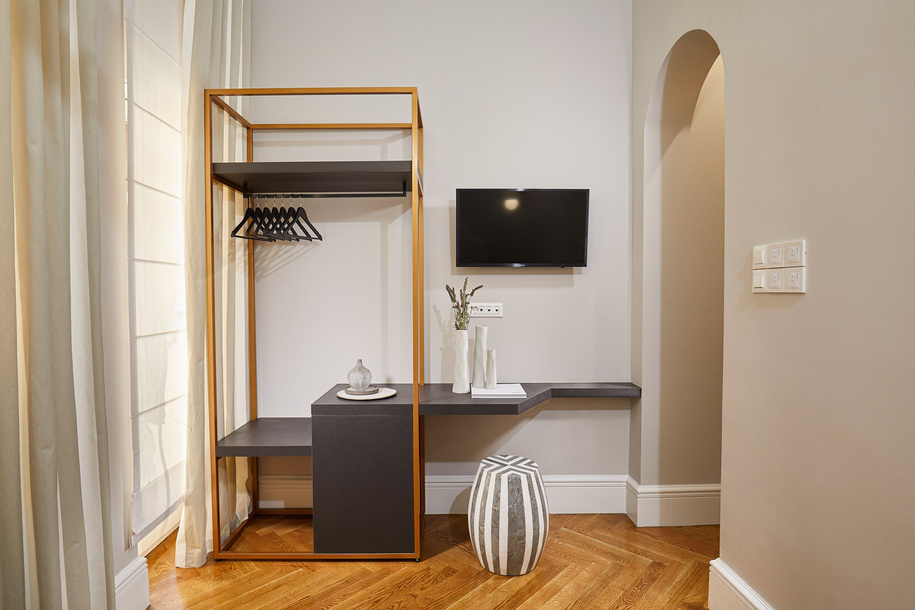 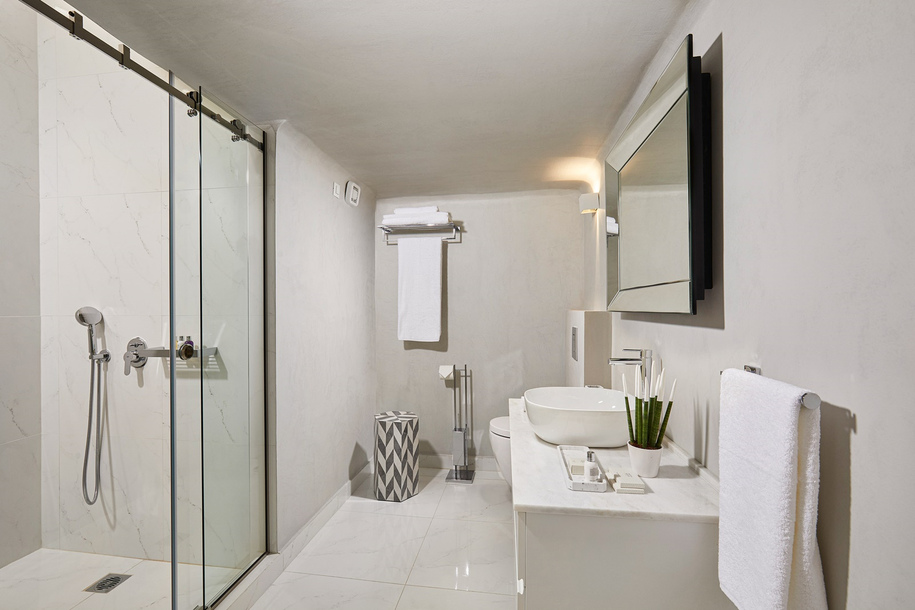 On the ground floor, the all-day bistrot seen in Ermou recalls other seasons, expressing at the same time the liveliness and the multifaceted character of the surrounding neighborhood. Behind the bar, the large wooden shelf with the turned elements is reminiscent of an interwar pharmacy and the self-luminous wallpaper depicting chandeliers brings to the fore with a twist the greatness of the past. 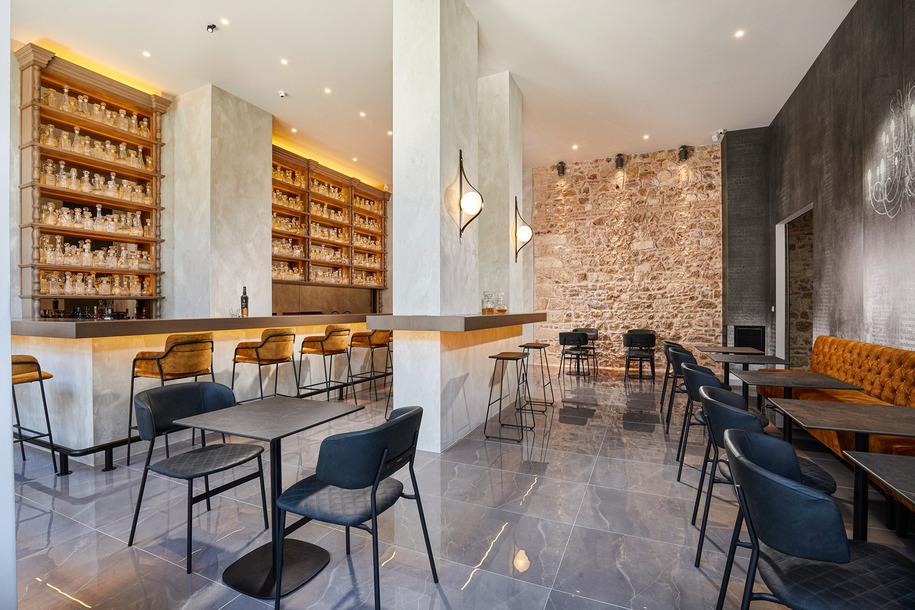 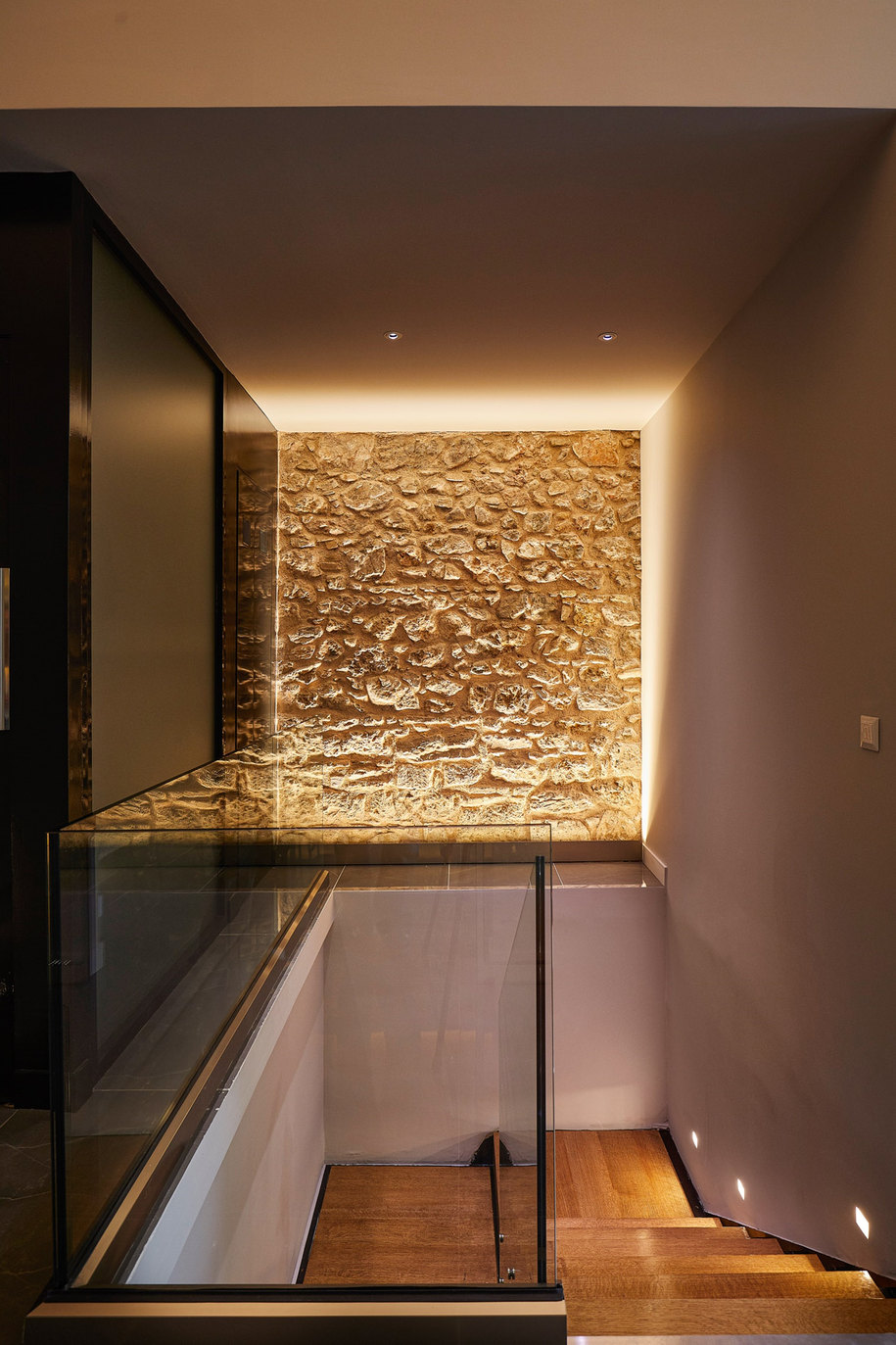 At the reception, on the one hand, the pre-existing building elements have been kept visible, such as concrete and stone, while the dynamic curved bench was made of white corian, creating an interesting conversation between the old and the new. The catalyst is the Infinito lamp by Davide Groppi, which was the reference point for the design of the space. 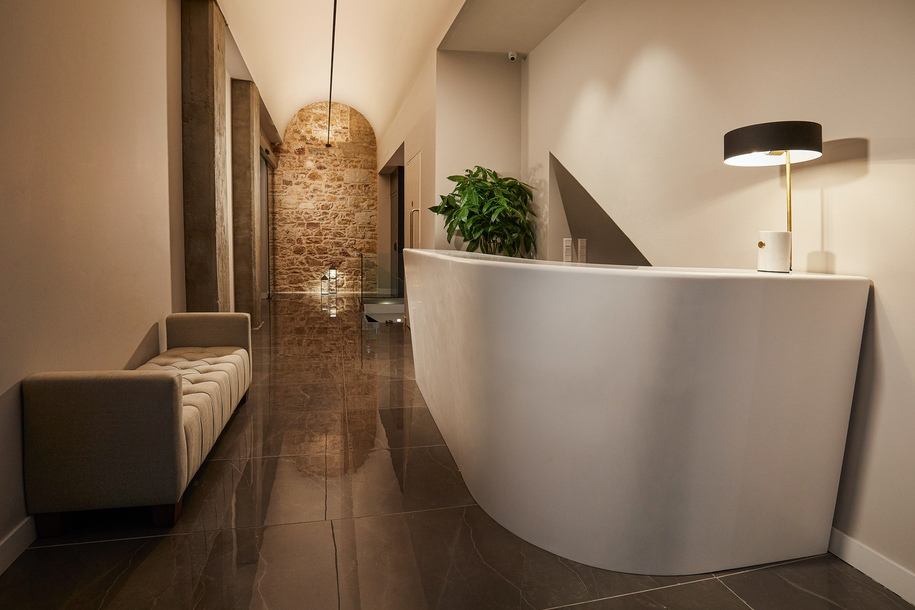 Designed by: a+ architects, Ioannis_Zacharakis