“Flat White” project is a 45m2 apartment, located in Madrid that gon architects were called to transform in order to be suitable for long-term renting. Based on this demand, the design aimed to shape a space of neutral character, with an interior arrangement capable of hosting and satisfying any inhabitant with any way of living.

Designing anonymous dwellings, without a specific final user, offers the opportunity (and the challenge) to investigate and put into practice concepts such as flexibility, perfectibility and versatility of occupation and the ability to adapt domestic space and time. 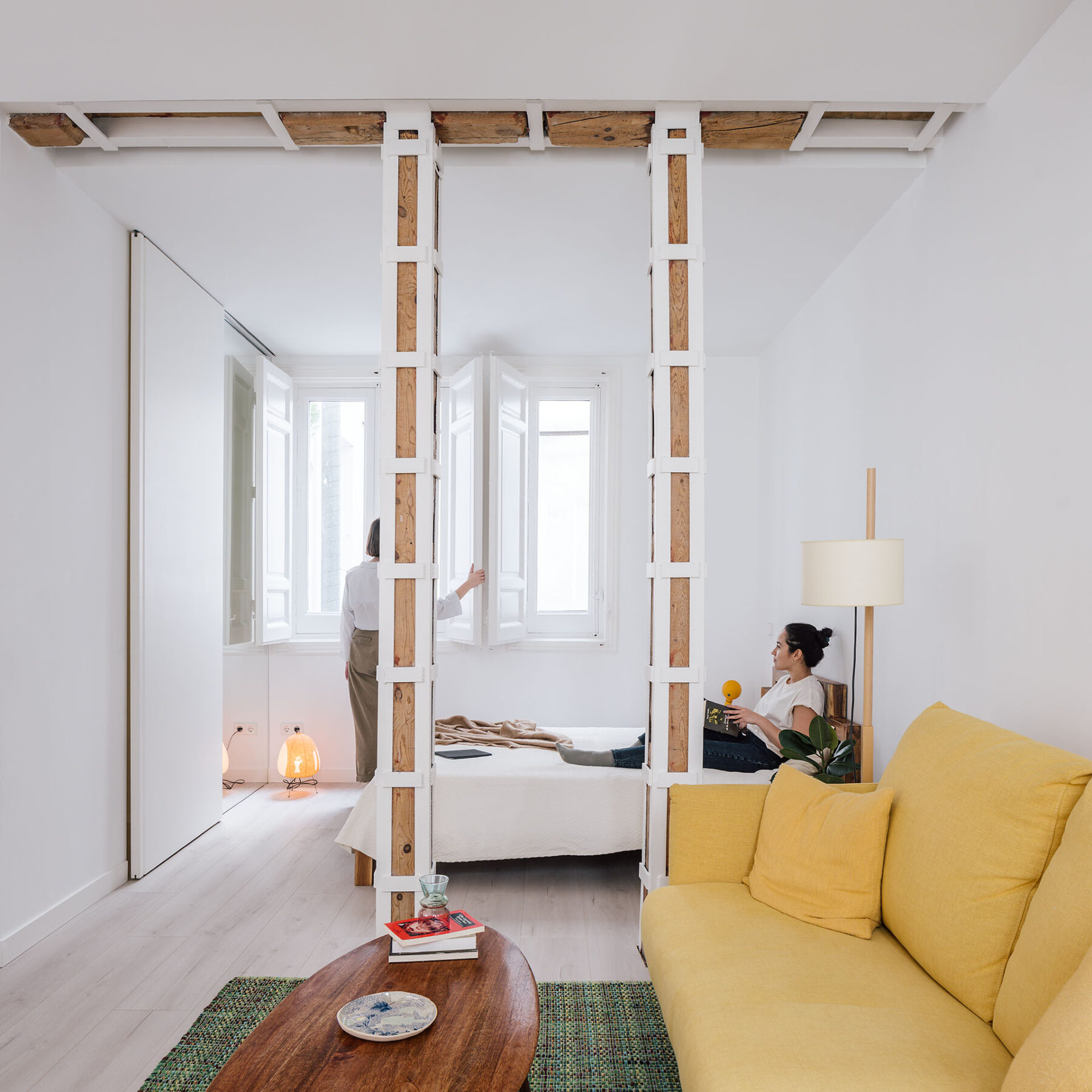 This is the case of Flat White, an apartment for rent for long periods of time, a commission that consists of designing, in the client’s own words, “a neutral house” -as if this were possible- susceptible to be occupied by any inhabitant with any way of living; a rehabilitation of a 45m2 space located in Madrid’s city center, near the recently renovated Plaza de España. 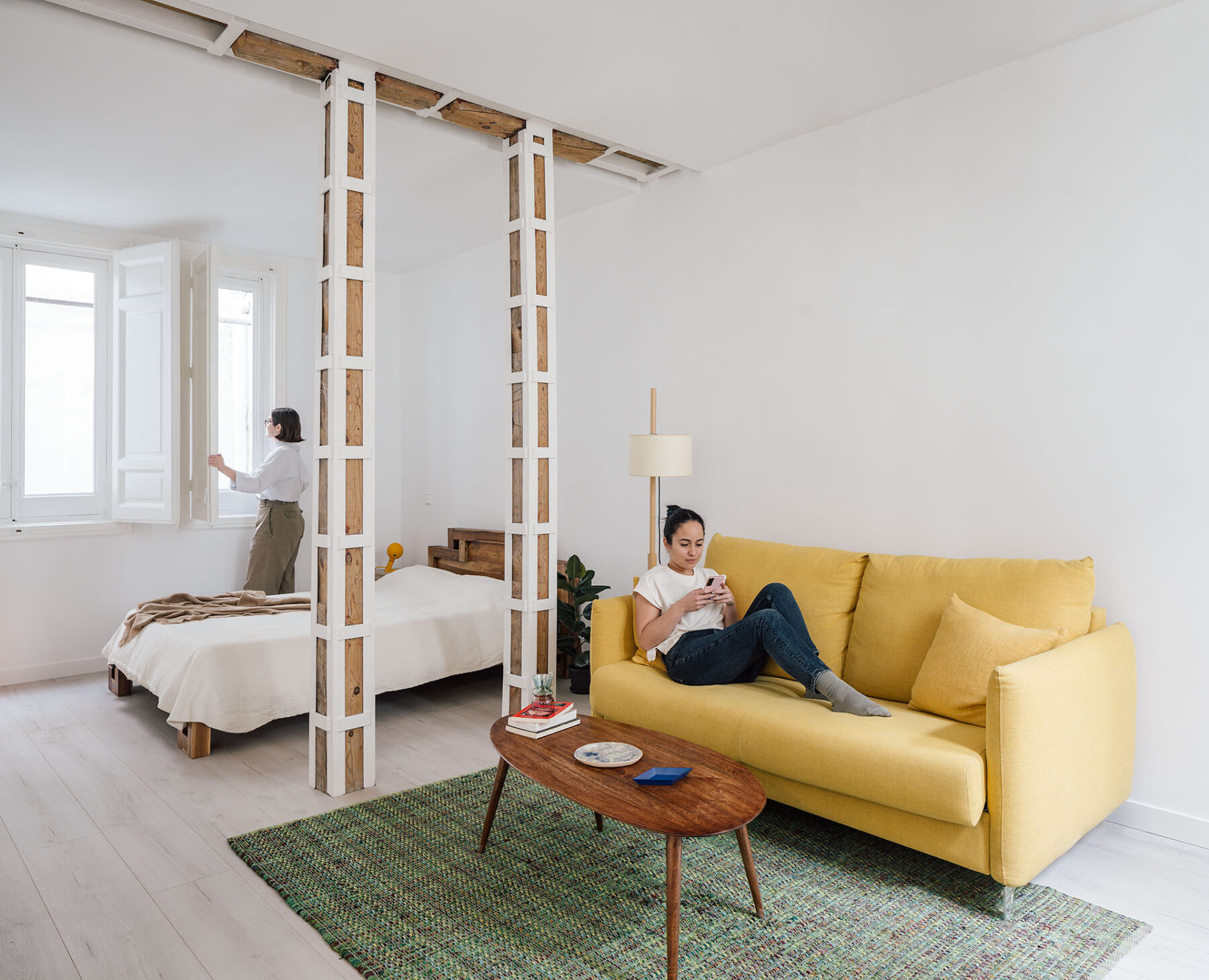 Starting from a floor plan of almost square geometric proportions, originally divided in half by a load-bearing wall, a house is projected that seeks, above all, to be a good place to live where its future occupants manage to adapt.

In contrast to the excessive division of the apartment into rooms of different sizes prior to the renovation, the new organisation of the domestic space is articulated in four rooms -corresponding to the archetypal pieces of any traditional house (kitchen-dining room, living room, bedroom and bathroom)- of similar dimensions, about 10 m2, and without a corridor. 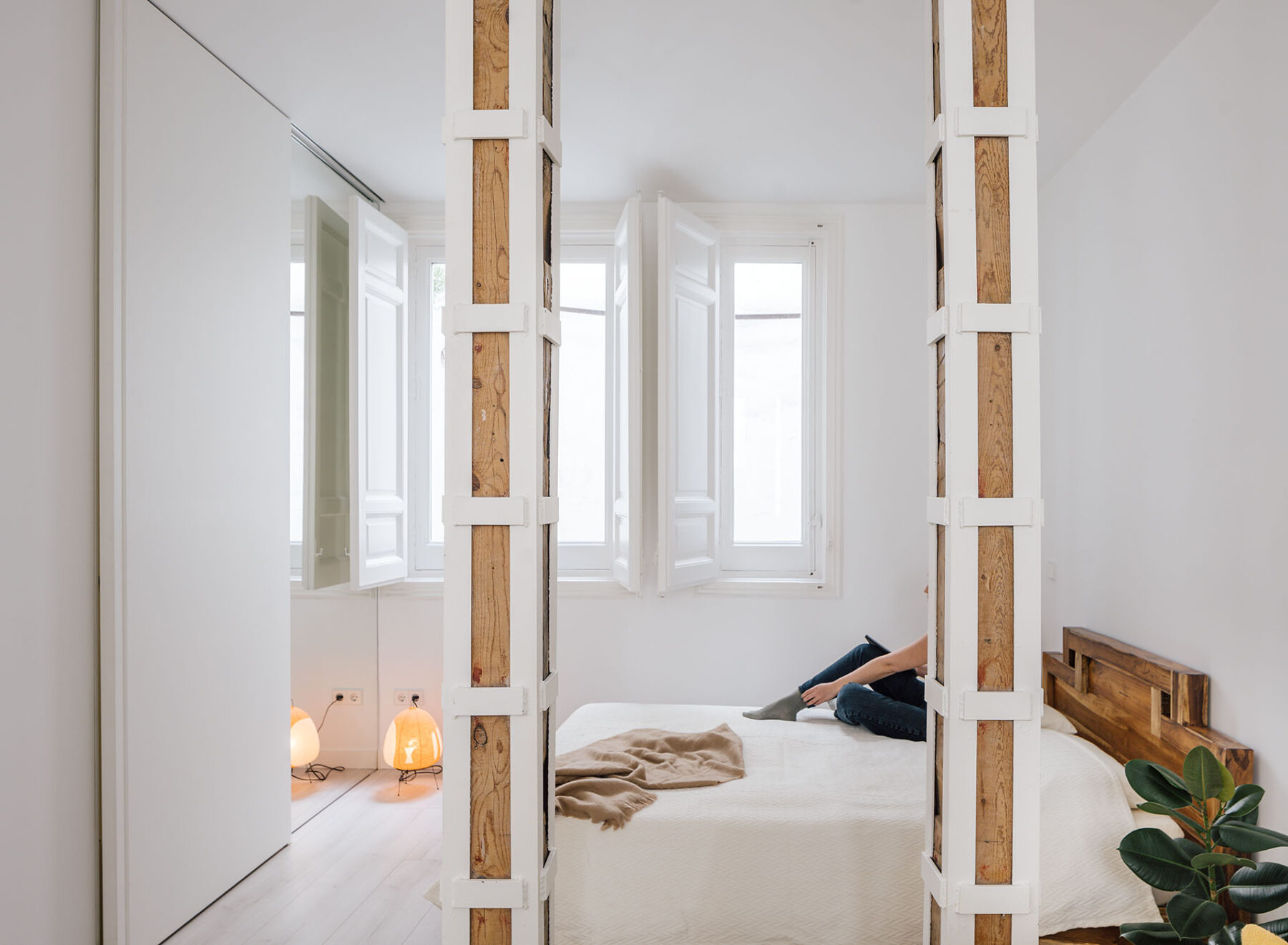 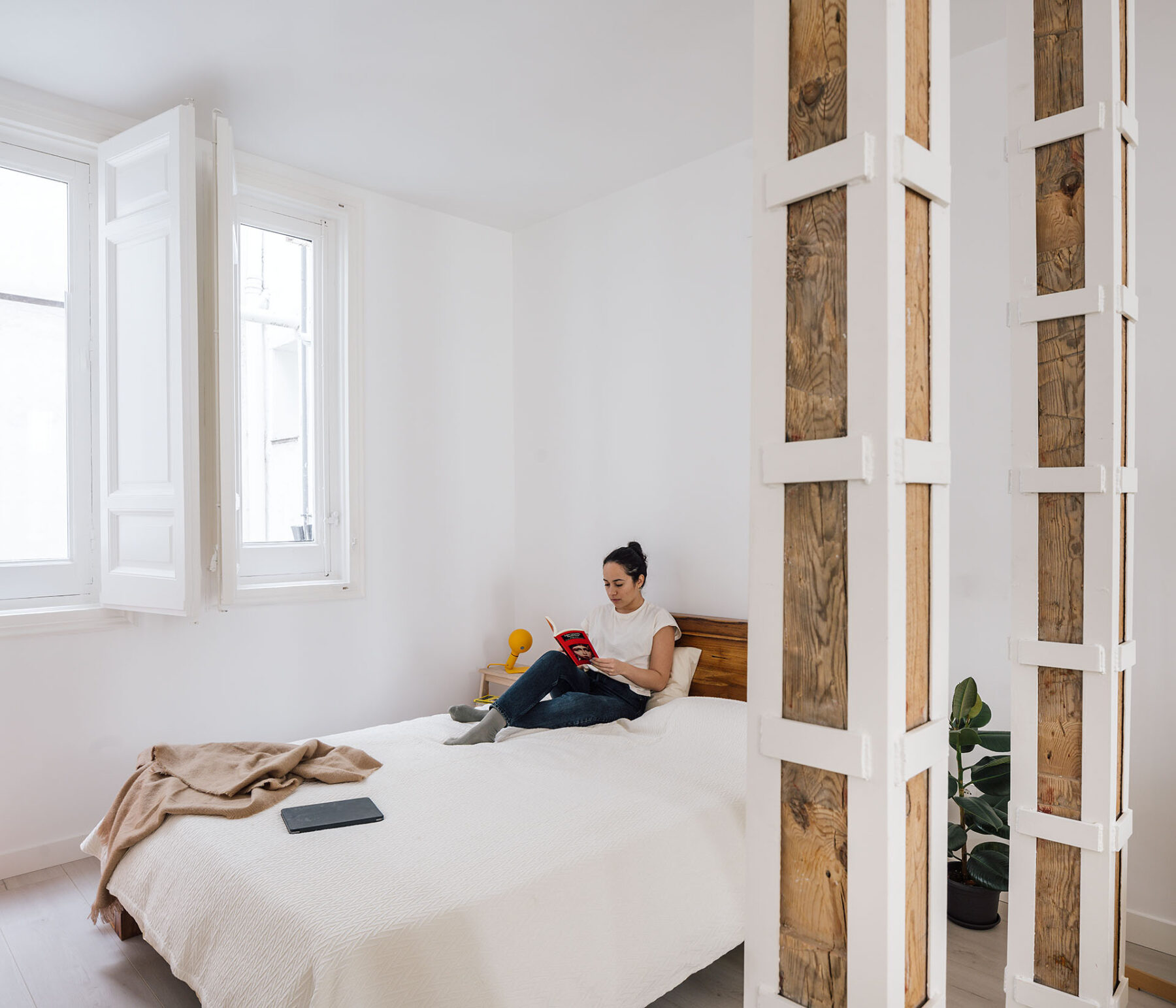 The four rooms, physically and visually connected – topologically related to each other – make it possible to understand the apartment as a system: a large room containing all the necessary domestic programmatic needs where the public/private, interior/exterior boundaries are diluted.

This great room brings into play several principles present in ideologically advanced dwellings, such as the de-hierarchization of spaces, the kitchen as the main character of the house, the atomised bathroom or the rooms without a predetermined use. 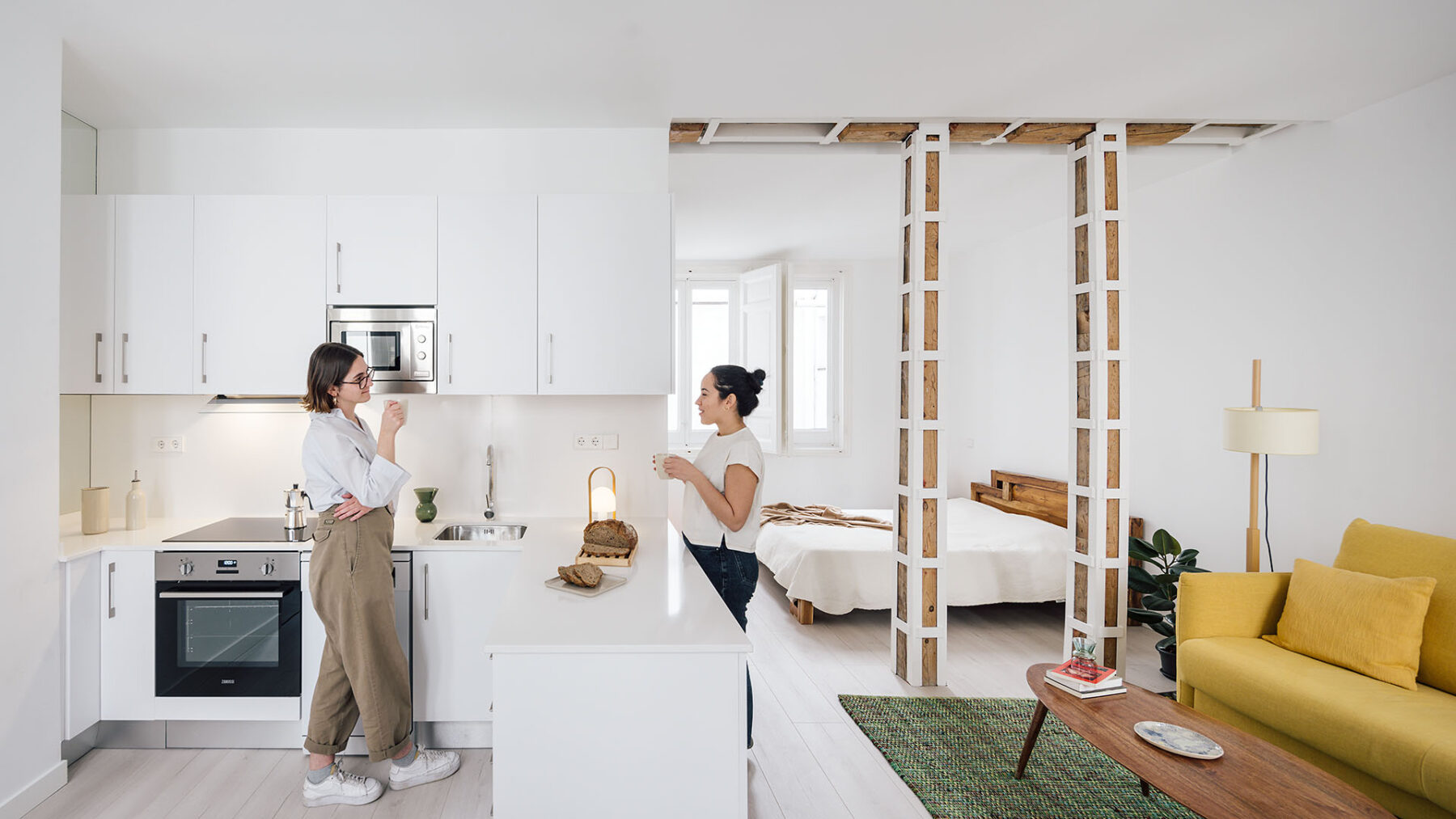 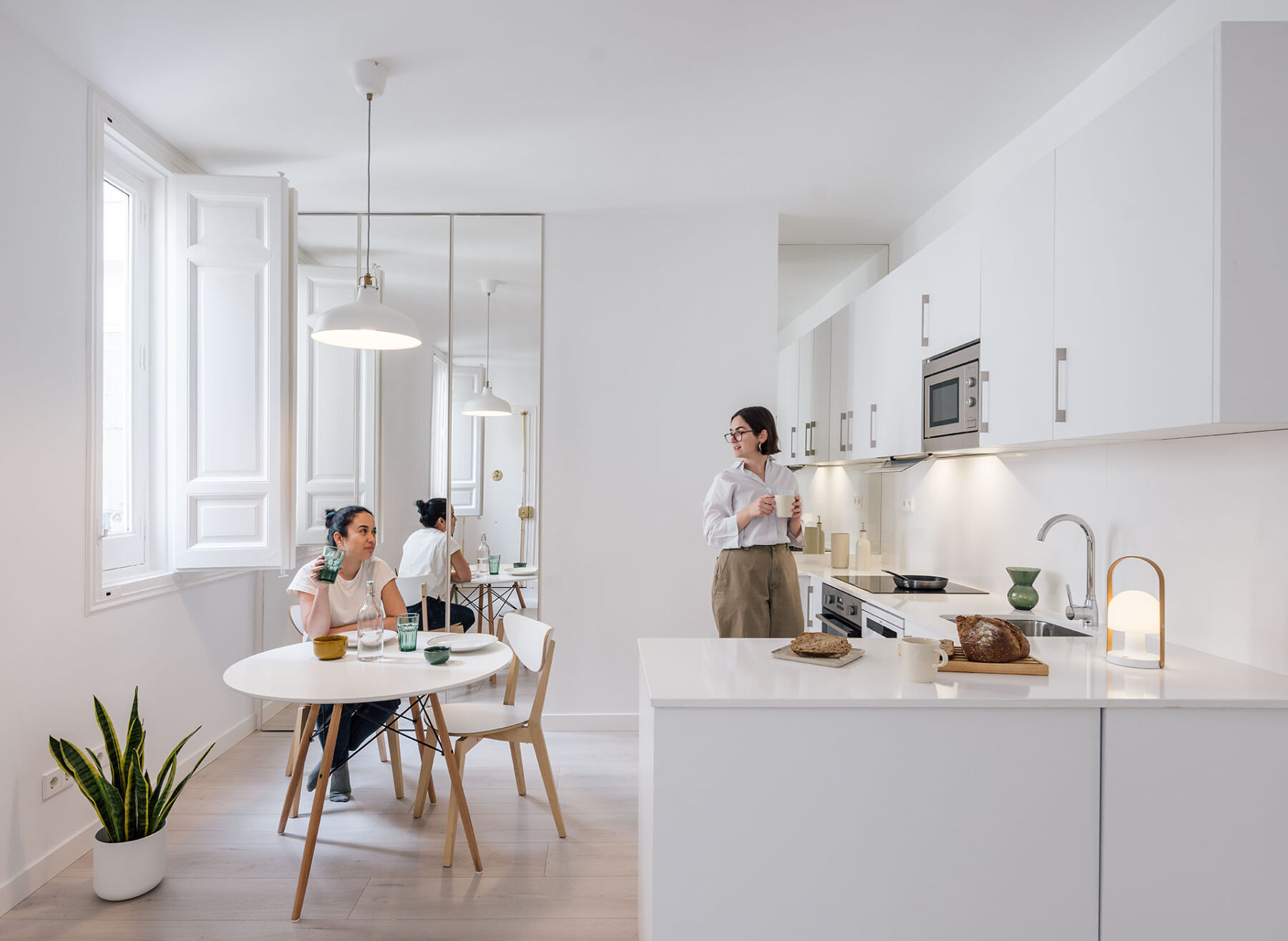 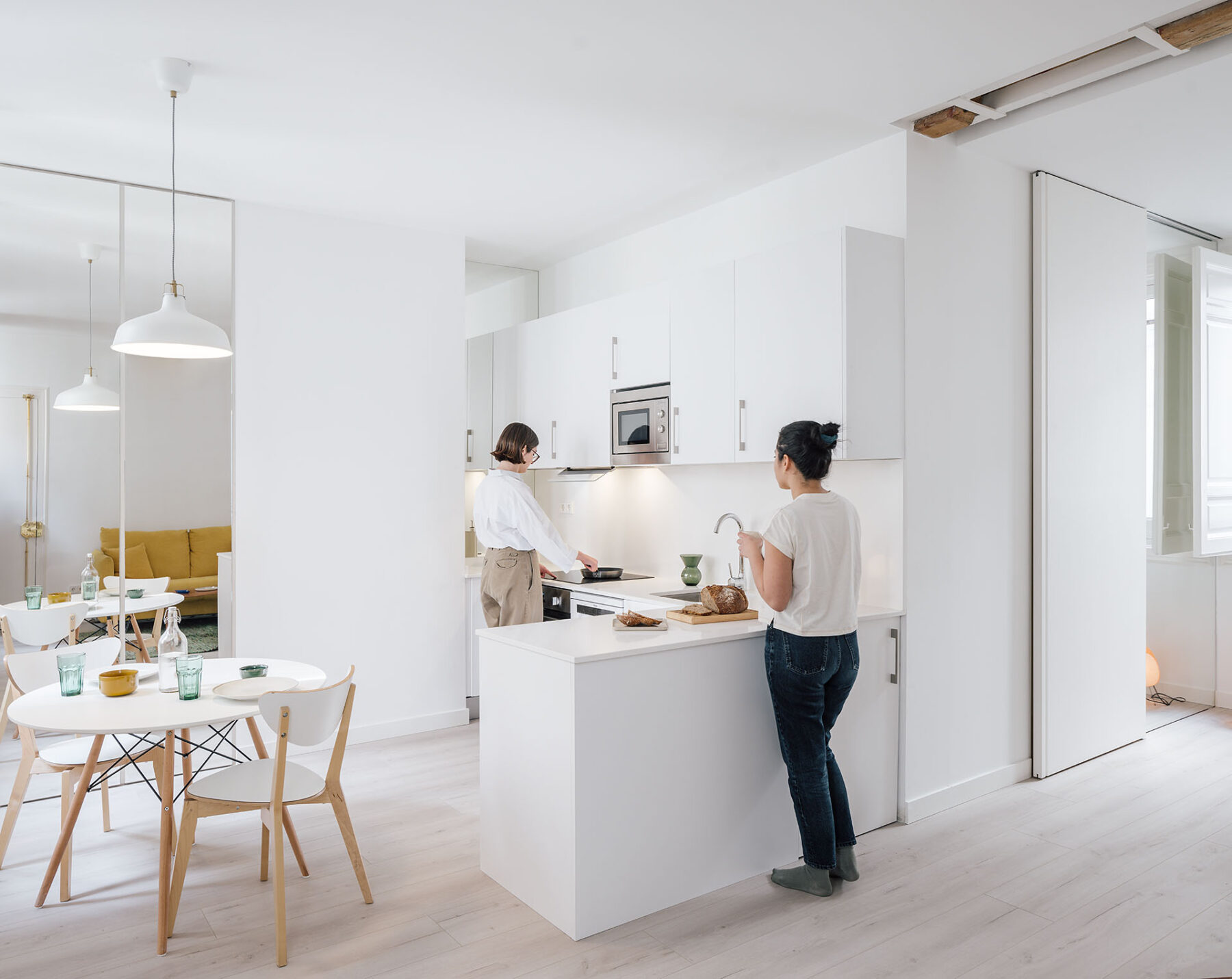 The hypothetical spatial neutrality demanded is achieved through the use of white on all surfaces, horizontal and vertical, floors and walls, but also in elements of the house such as the kitchen, sink, shower or toilet.

The use of colour in the rest of the house is limited to the different movable pieces, which constitute a system of objects for carrying out different actions, such as sleeping, eating, bathing, or resting. 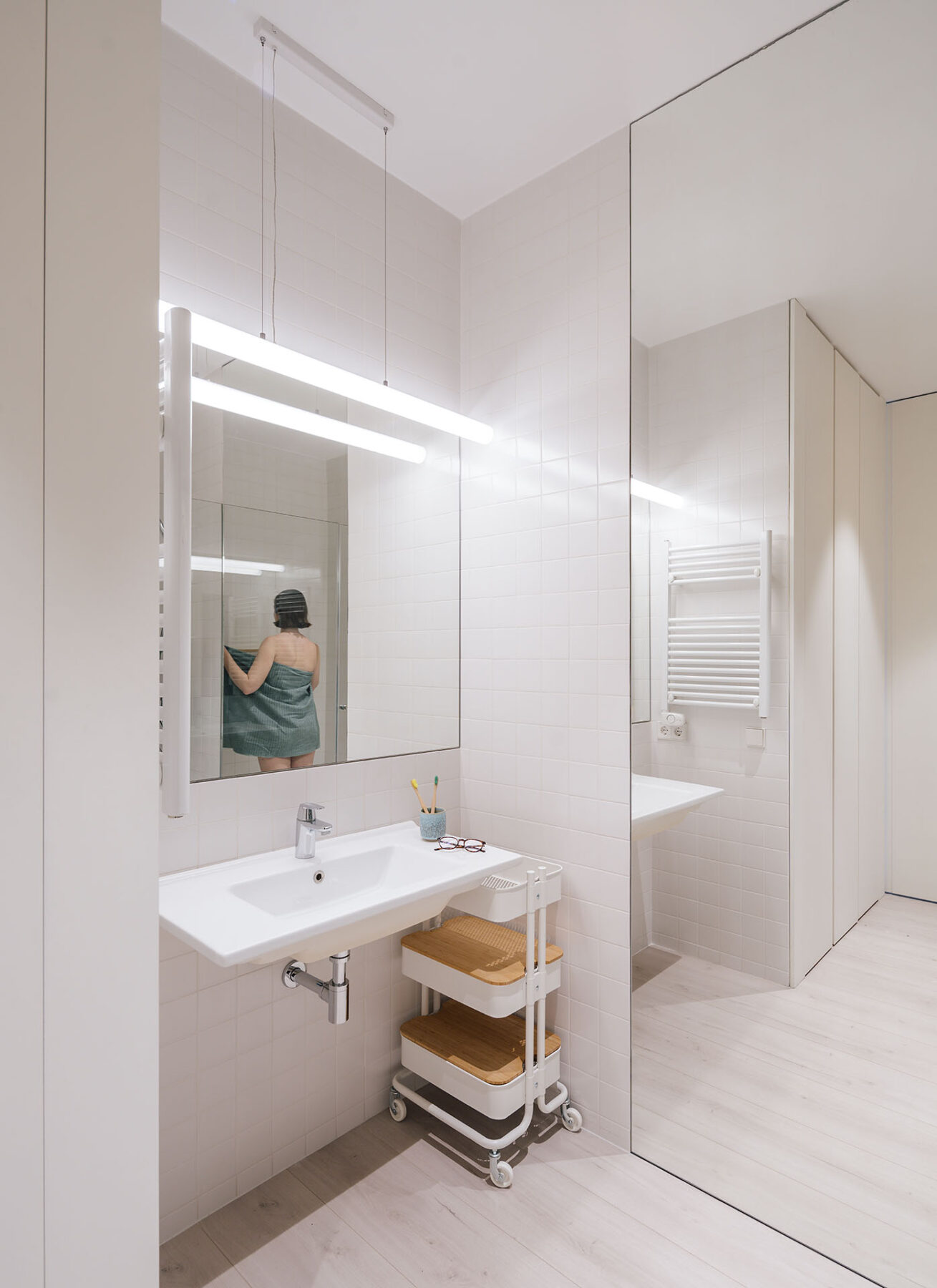 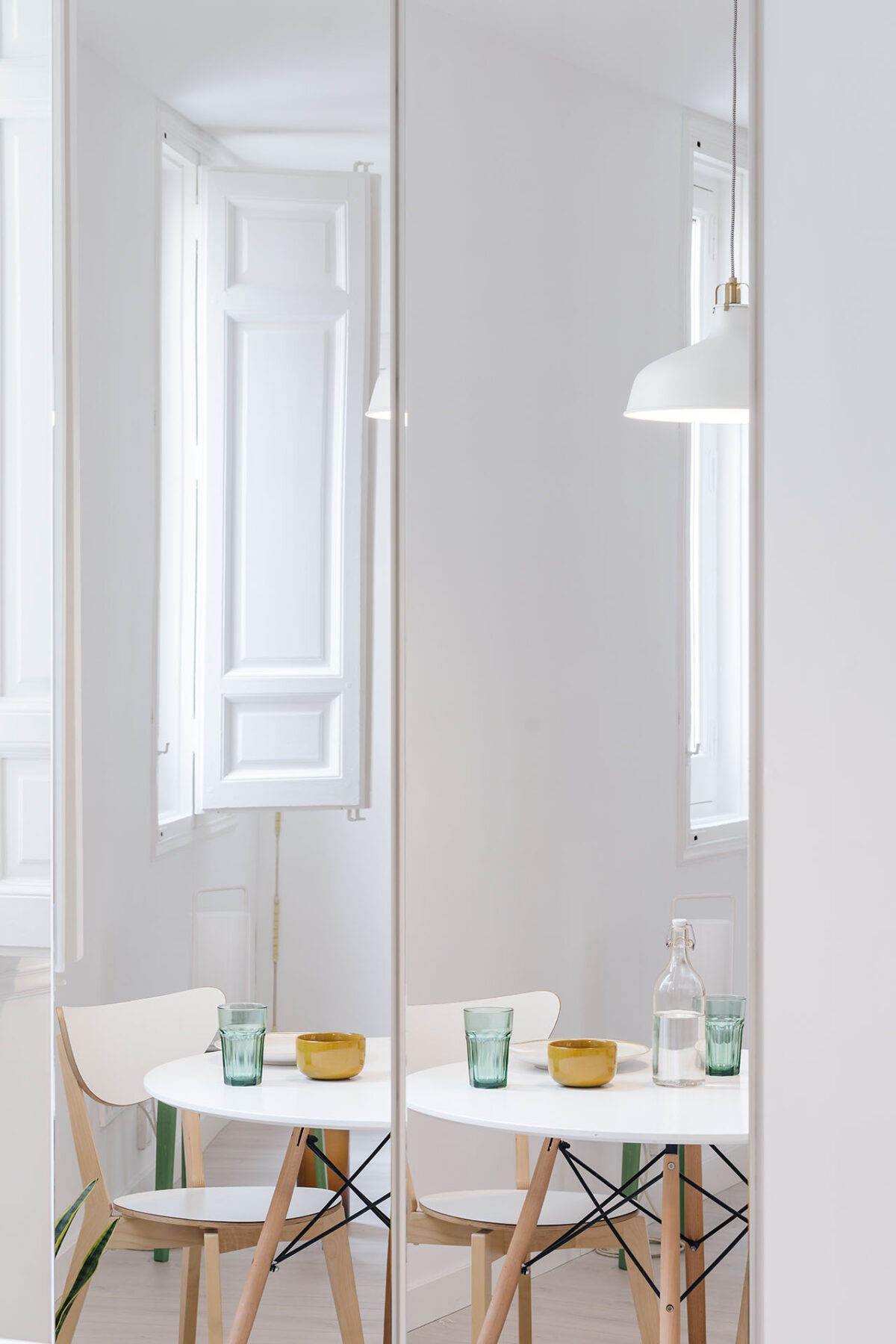 Carol and Celia, a couple of entrepreneurs recently installed in the capital and the protagonists of this story, are the first of the many occupants of this blank house on which to draw a future where the best is undoubtedly yet to come. 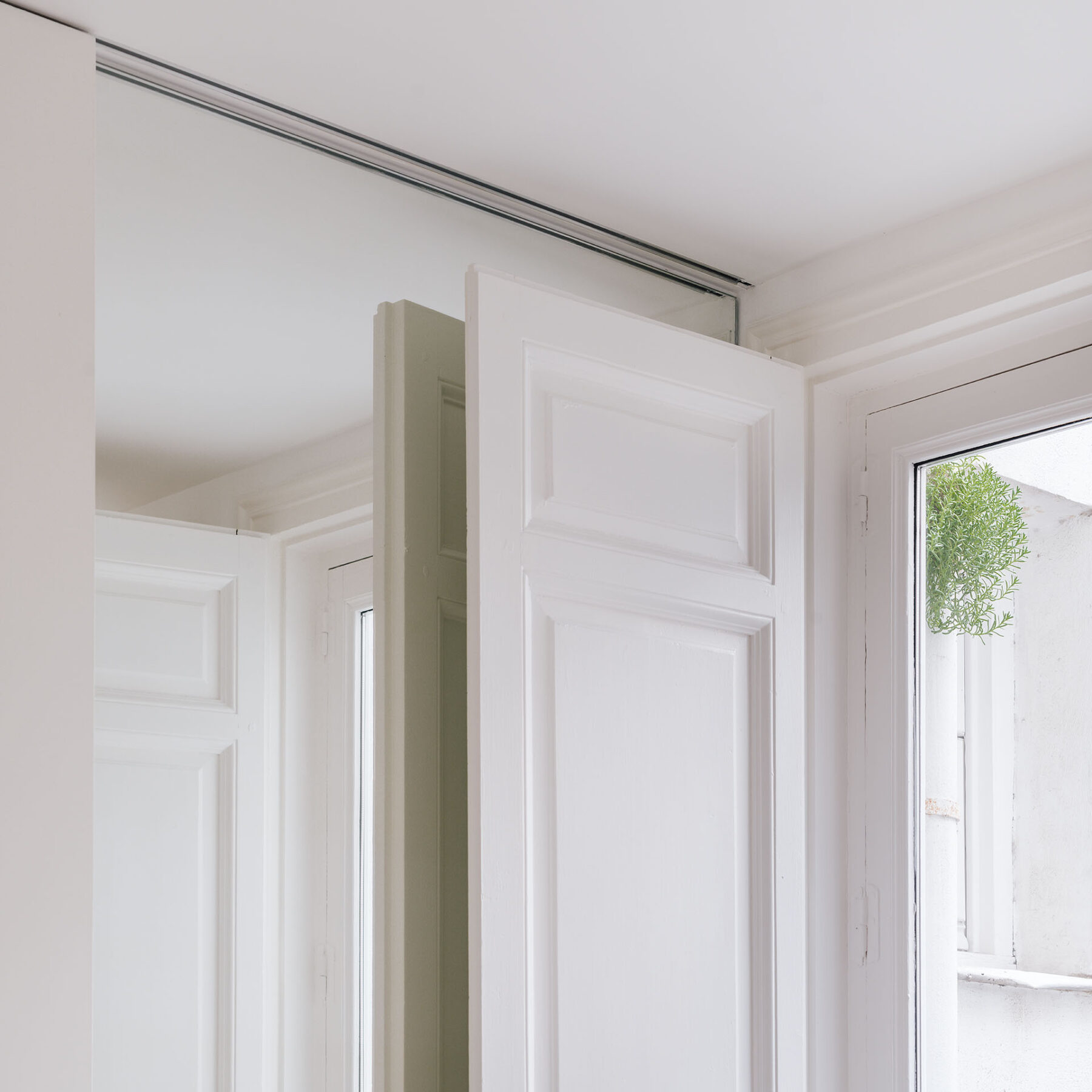 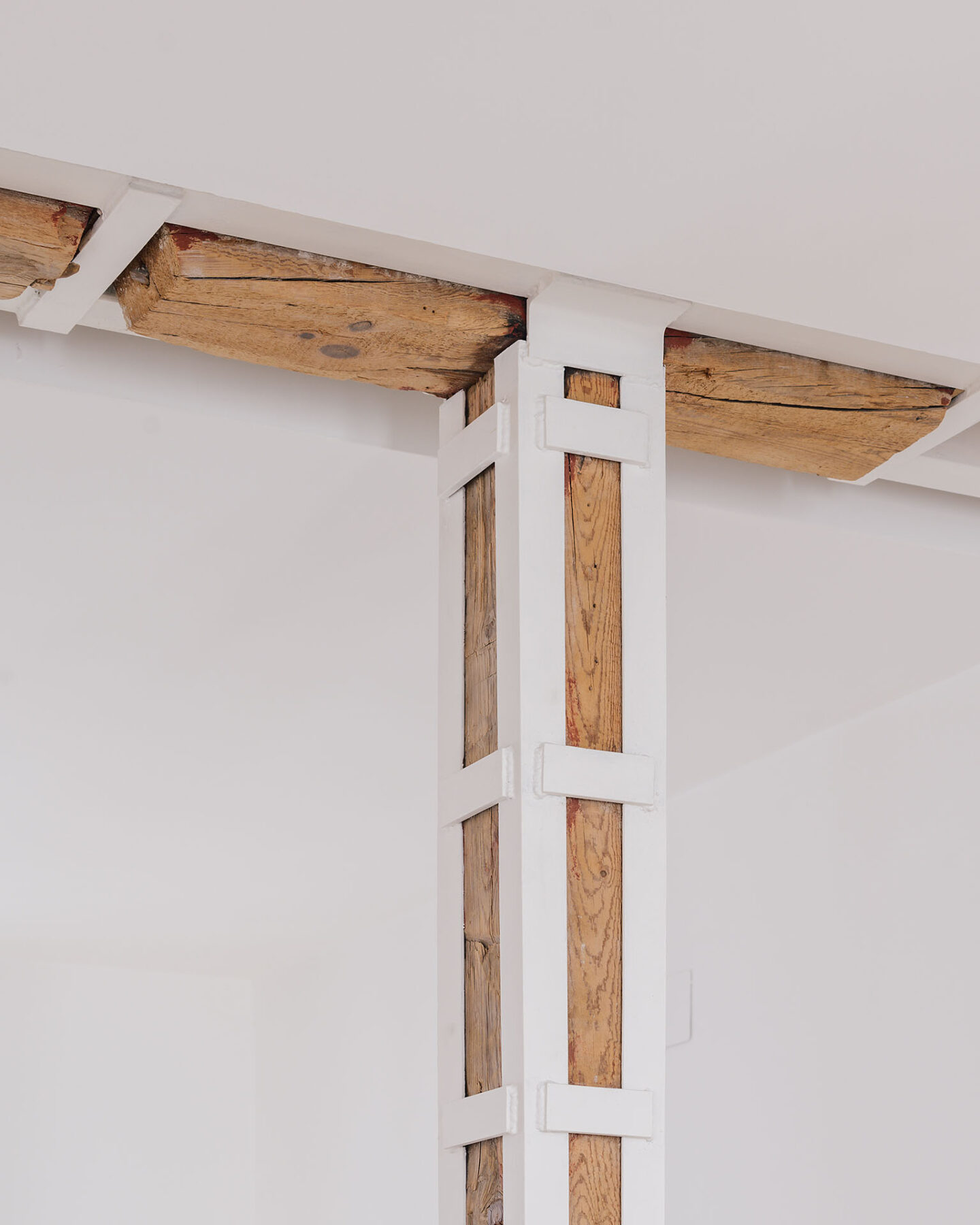 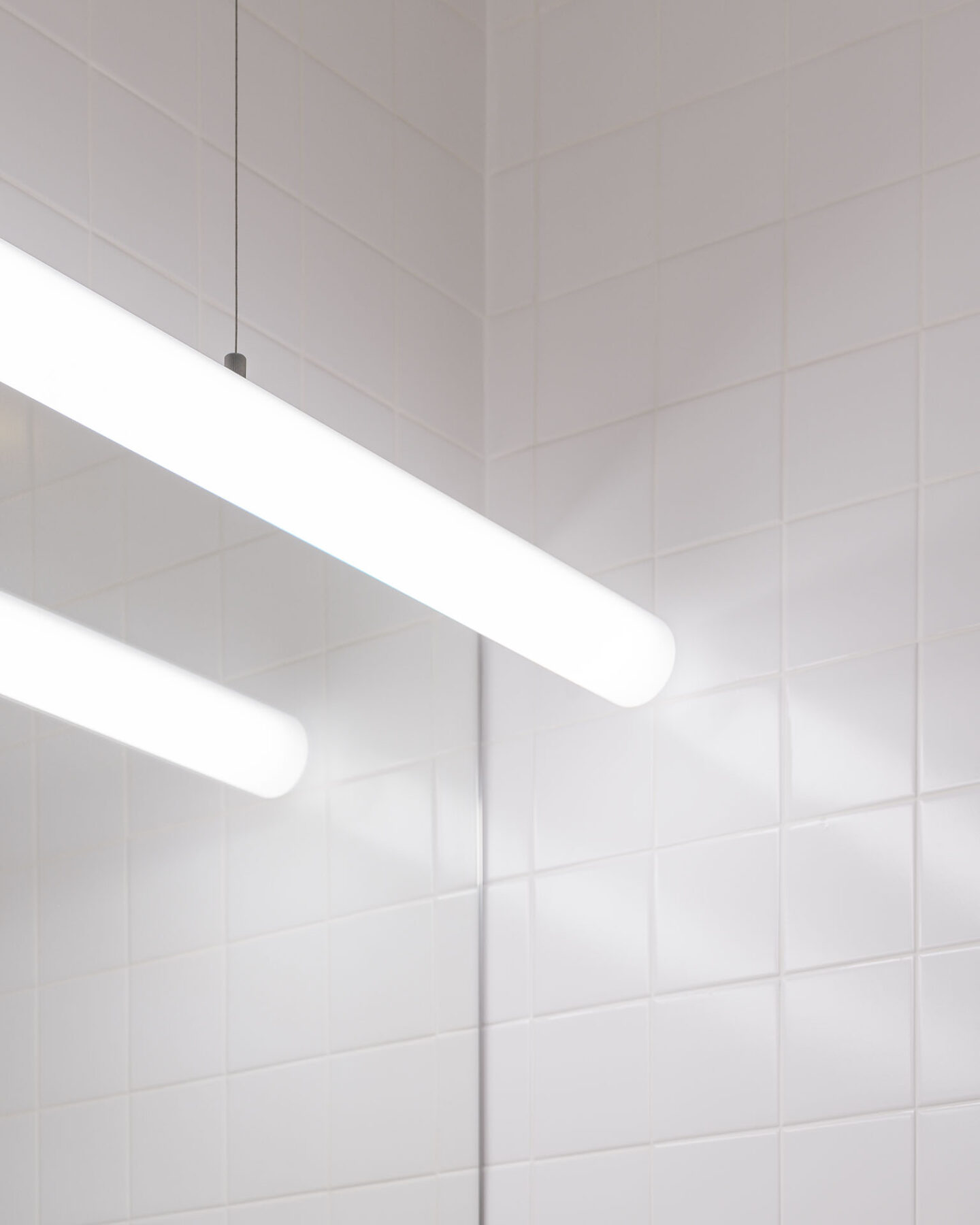