After the successful renovation of De Biertuin East in 2015, Studio Modijefsky was commissioned to design De Biertuin West on the other side of Amsterdam. The concept is inspired by the German biergärten, an outside open area usually surrounded by trees, where beer and food are served on long communal wooden tables. As De Biertuin West has both inside and outside space, Studio Modijefsky decided to bring the biergärten atmosphere indoors, with an urban garden vibe for the external façade and outdoor terrace. 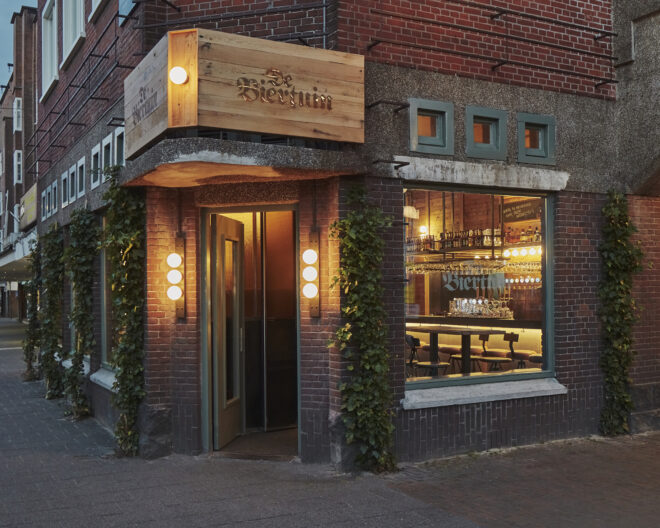 Linearity, togetherness, and warmth are the concept’s main components. These abstract elements are translated into an interplay of raw, rough materials often found in outdoor spaces such as concrete, wood (sourced from parts of old wagons), aged red copper, and oxidized green copper. 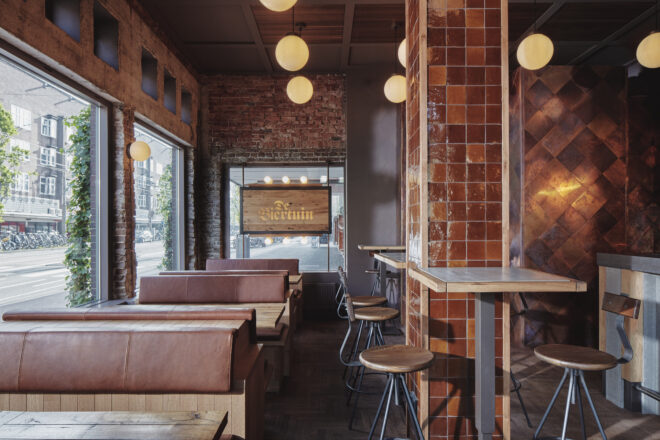 As a nod to the craft beer served here, the copper alludes to the traditional tanks in which it’s brewed. The walls are covered with a soft touch of recycled oak to enable the leather on the customed furniture stand out and highlight the bar’s dark grey concrete texture. Warm and dark tones on the ceilings and upper plinths form a background for the rows of lightbulbs connecting the two areas. 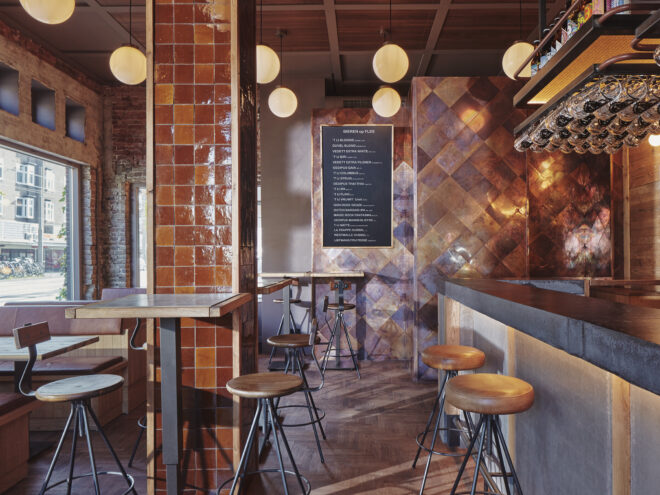 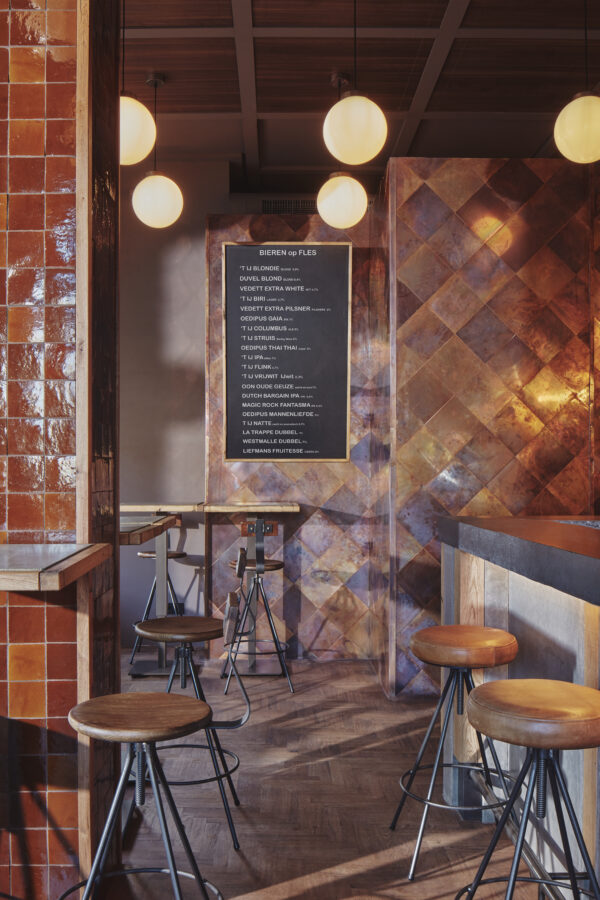 Detailing is inspired by the building’s original architecture. The irregularity of the dated red bricks is counteracted by the geometry of the lined-up light bulbs and the rhythm of the square wooden elements that rebound from the ceiling to the tables. A typical biergärten has a lot of lines: the rows of tables and benches; the planks the tables are made out of; the lines of ceiling lights. 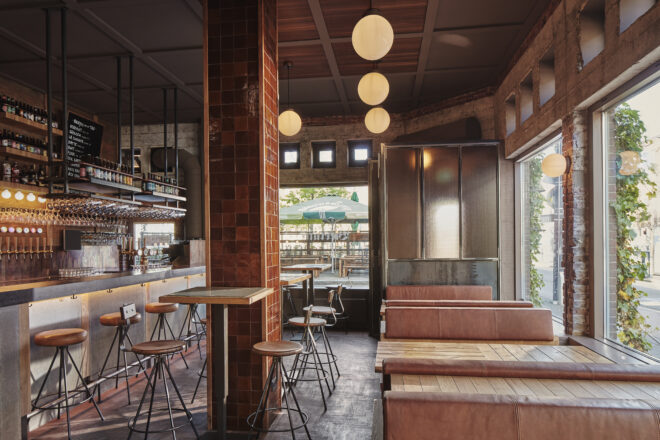 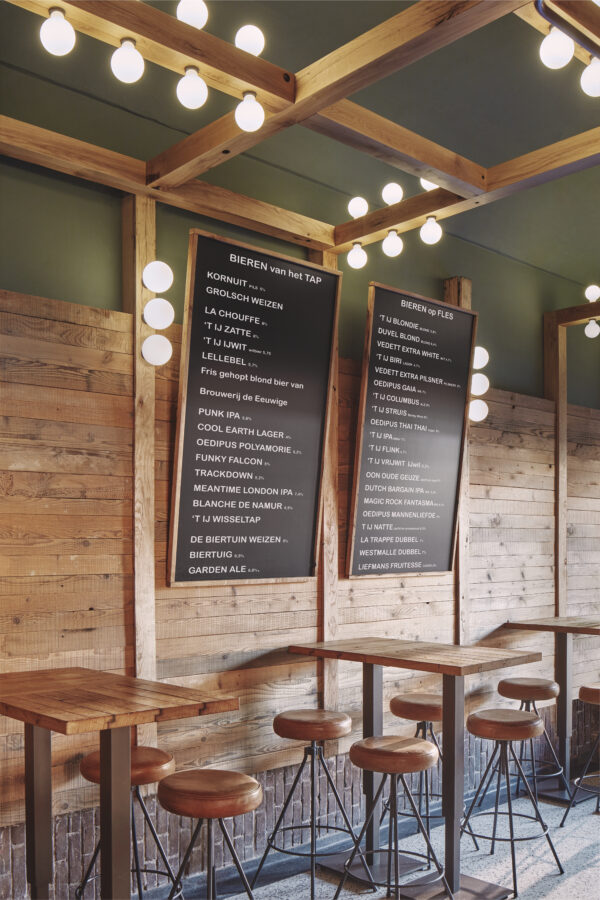 This geometry is applied in a variety of ways throughout the interior. Wooden planks climb halfway through the walls to serve as wall paneling and a structure for the signage boards. One large
column stands in the middle of the left side of the bar, covered in red tiles whose glossy texture is intensified by the reflection of the luminous spheres hanging from the ceiling. 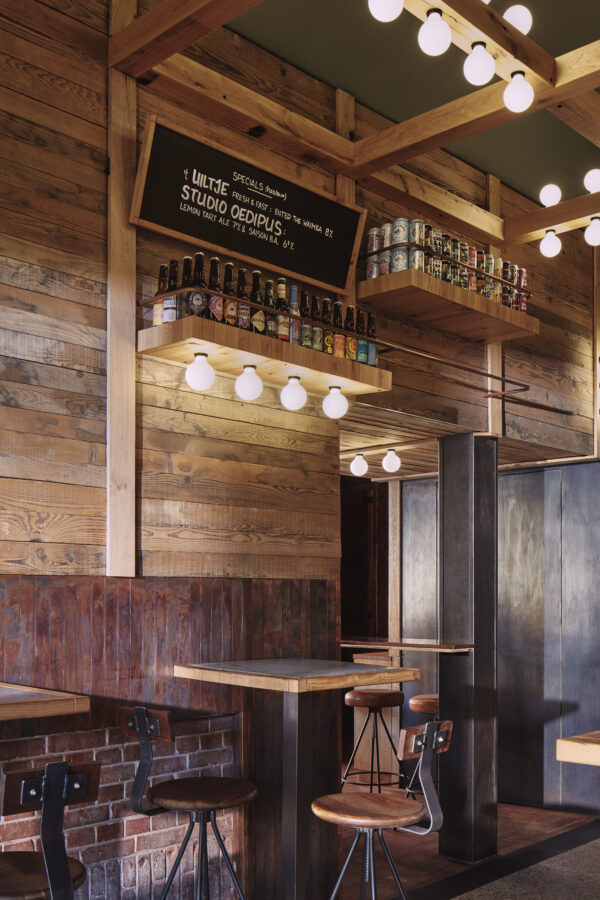 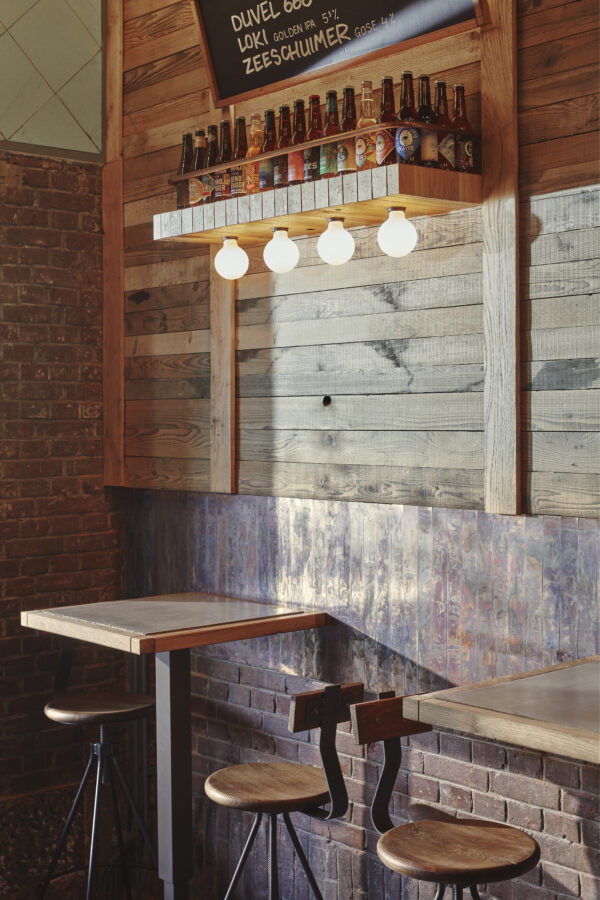 Pre-existing black and white poured terrazzo become a playground for the studio to play with shapes and colors, in conjunction with a herringbone wooden floor that moves across the bar’s
largest area. Long lines of high tables join with solid leather benches and wooden barstools to outline De Biertuin’s beating heart: the bar. Here you can find the real stars of the show: the beers, which bask in the brightness of warm lights that emphasize the roughness and details of the surrounding textures. 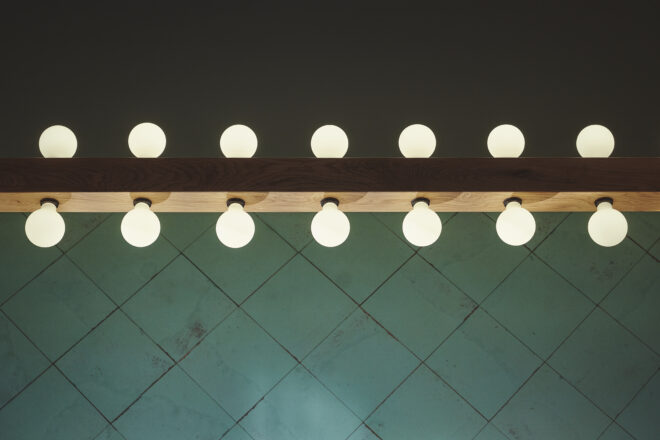 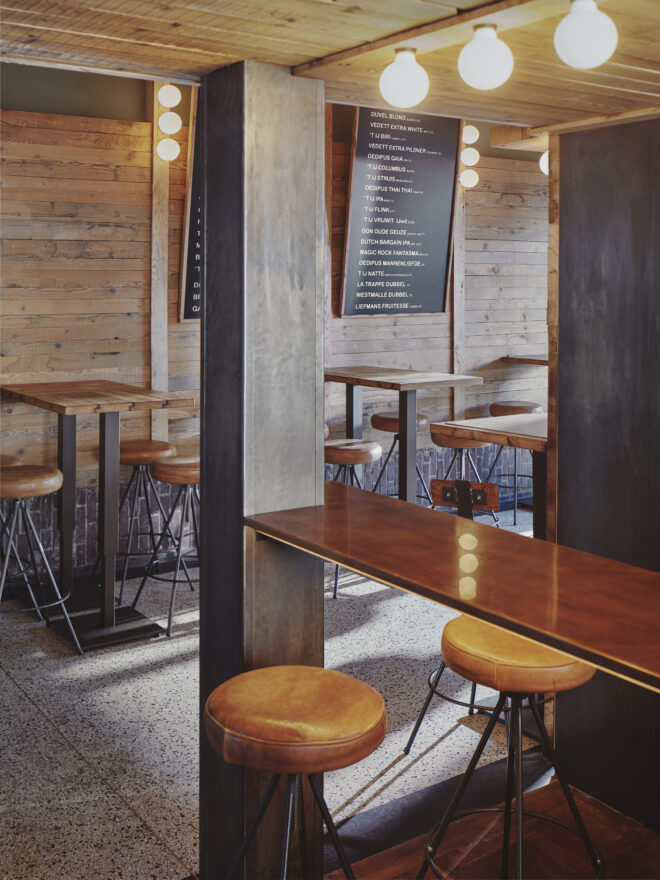 Outside, the terrace is defined by a composition of twelve wide customed wooden benches and tables, some of which are detailed with a layer of dark grey concrete on top. A grid of warm light bulbs connects the terrace to the main building’s front façade, crossing the street towards the menu boards placed on the windshields. 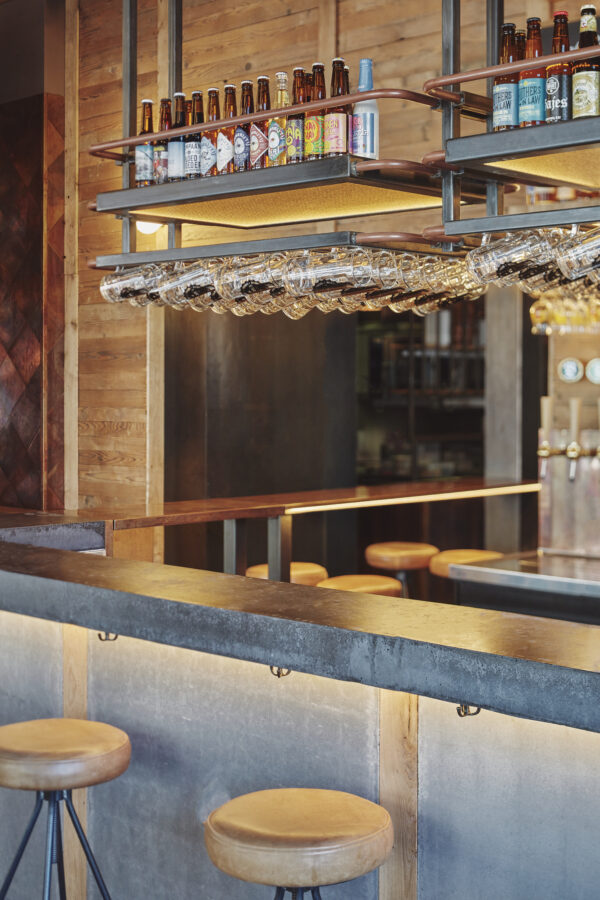 The terrace’s wild nature is characterized by a thick portion of ivy bushes that defines the perimeter of the patio. These bushes introduce visitors to De Biertuin West’s defining feature: the plants and greenery spread liberally throughout. They unite the interior and exterior and imbue both with the biergärten feeling that forms the project’s backbone. 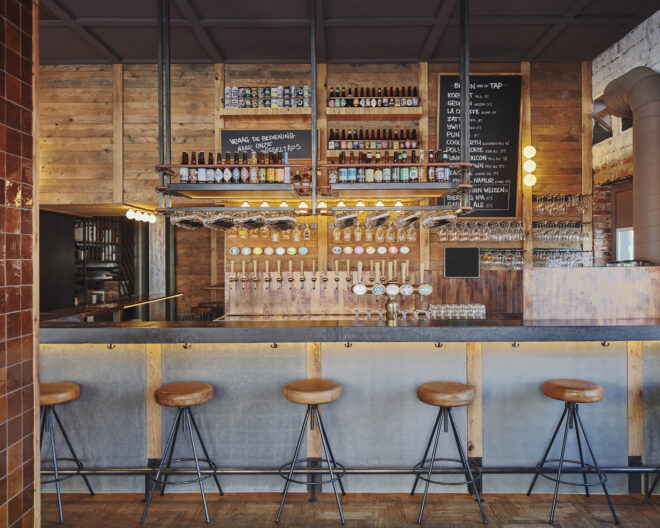 By balancing reclaimed materials and harsh textures with warm tones and gentle lighting, Studio Modijefsky has once again given a sophisticated yet original touch to a pre-existing architecture: a place that is clearly part of De Biertuin family but has its own unique character. 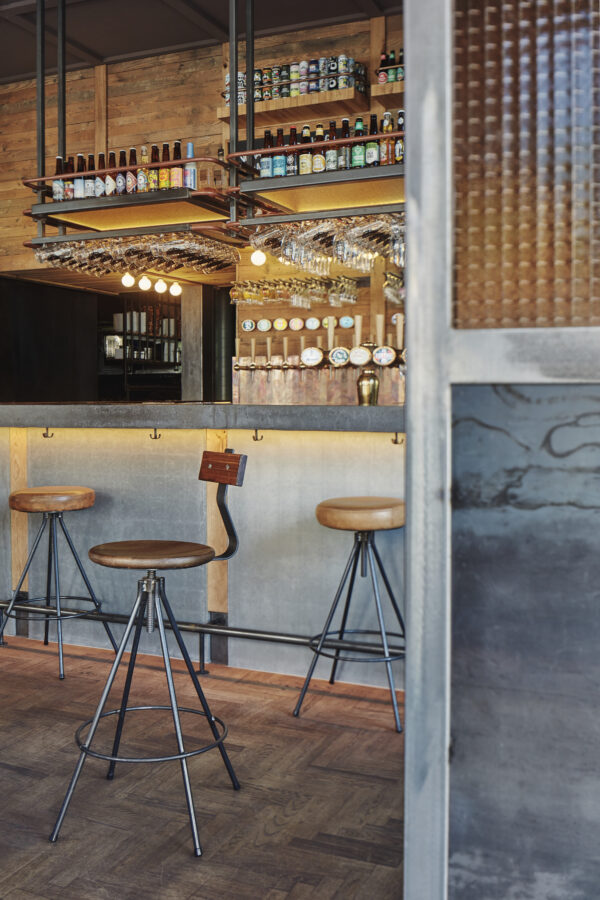 by MELINA ARVANITI-POLLATOUArchisearchhttps://www.archisearch.gr/wp-content/uploads/1.Danopoulos-370x700.jpg
SHARE THIS PAGE
WITH YOUR FRIENDS