Fotis Zapantiotis renovated a 67sqm office space into an apartment in the center of Athens. The aim of the design was to create an open-plan apartment, which would allow the users and the visitors to perceive the full extent of the apartment in a modern way of living.
– text by the author

The residence is located in the center of Athens, within the commercial triangle of the city, where professional office spaces dominate the urban landscape. Situated in a building primarily comprised of office spaces, it had itself served as a professional space for several decades in the past. 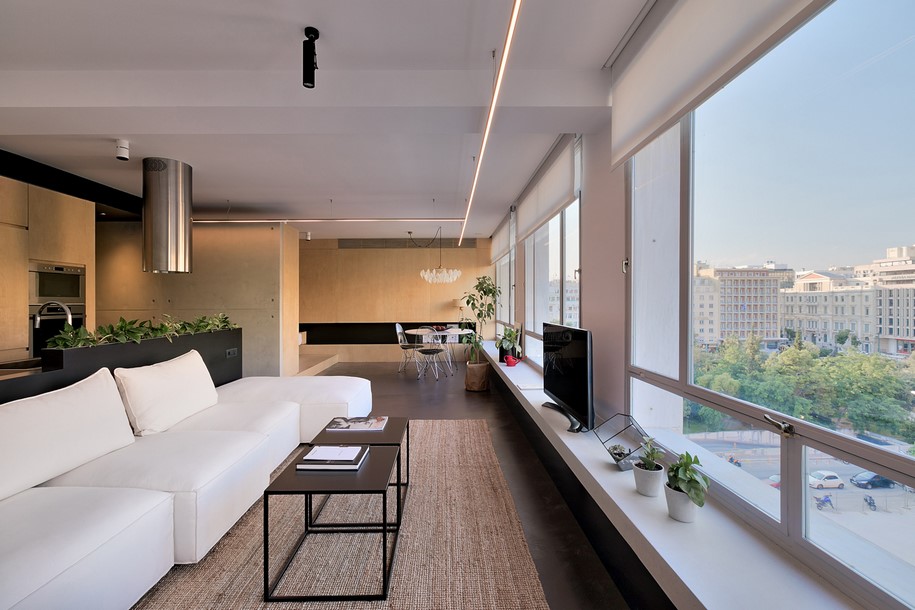 Although part of a densely-built neighborhood, the apartment enjoys the privilege of having its main facade high, totally free, with an unobstructed view of Klafthmonos Square, the historical buildings of the city center, the emblematic Alpha Bank’s building of Sir Basil Spence and the Stadiou street, putting the user almost silent, uninvolved and observer of the city. 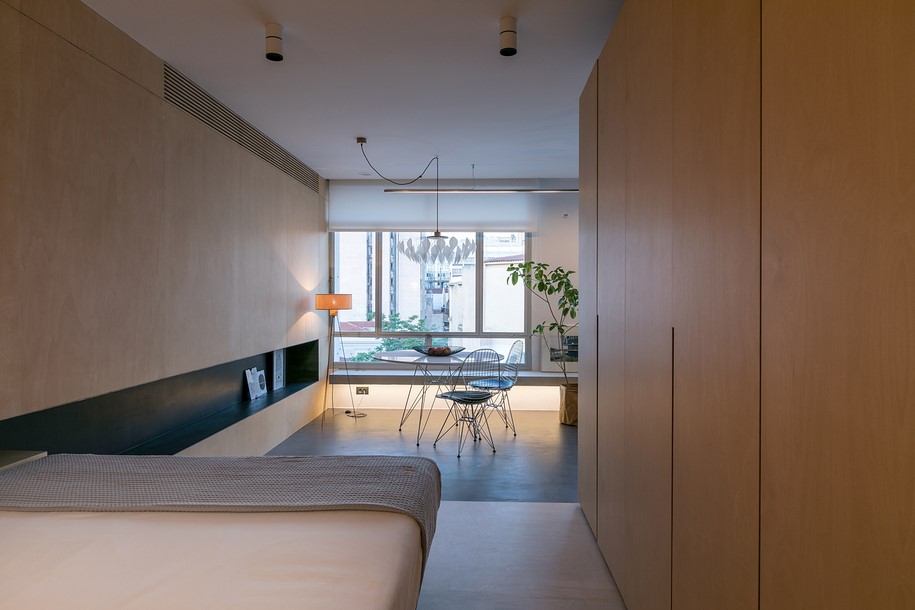 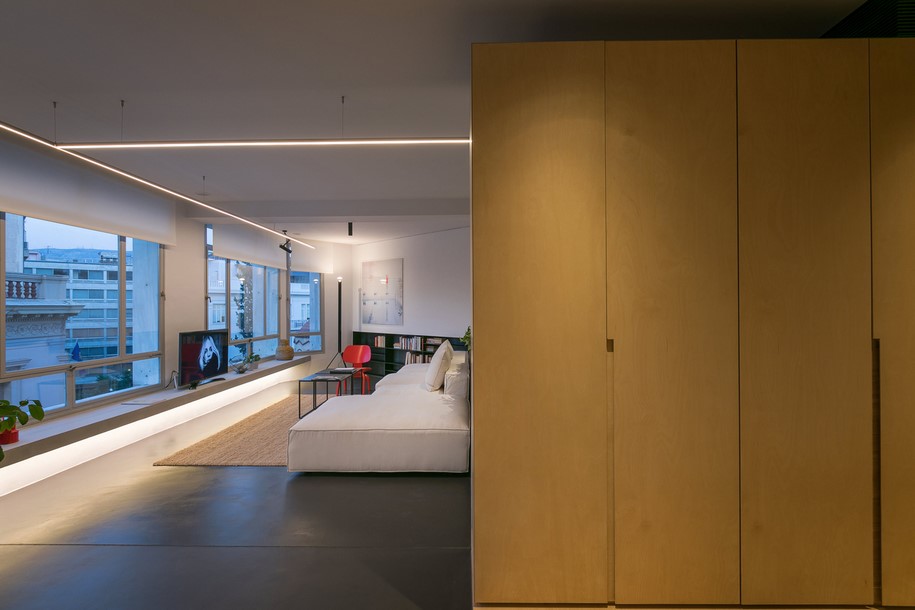 The new owners’ request was the renovation of the apartment into a residence, with the ultimate goal being commercial utilization via short-term leases. The solution presented was informed by the modern way of living, with its rapid and transient characteristics, the relatively small size of the apartment and the residence’s exposure to the view. 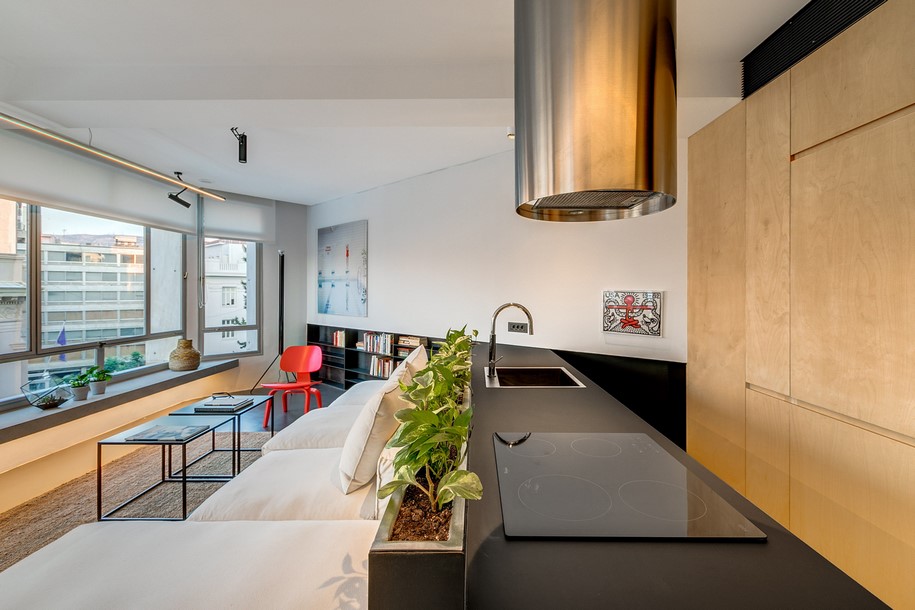 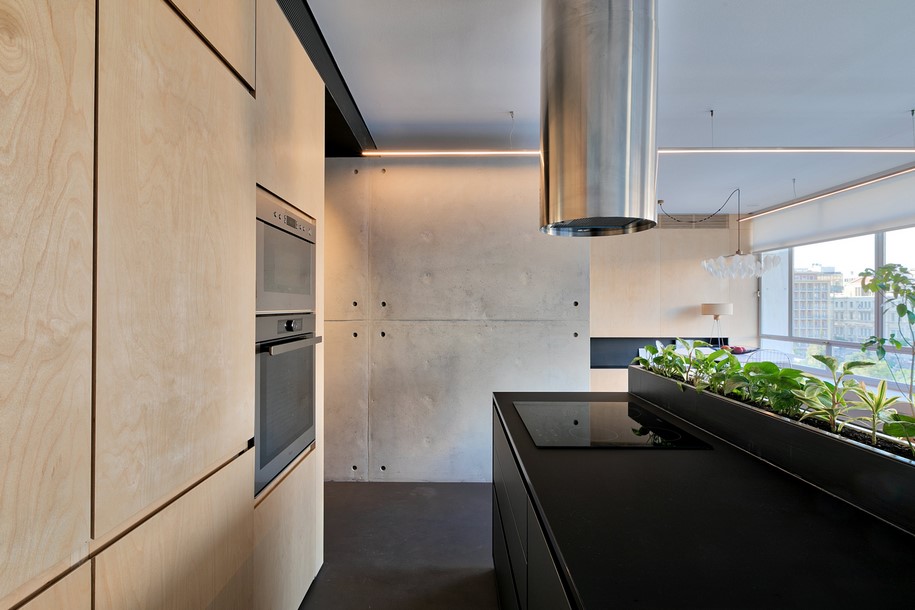 The very structure of the residence defined the framework under which Fotis Zapantiotis organized all movements and operations in the floor plan. 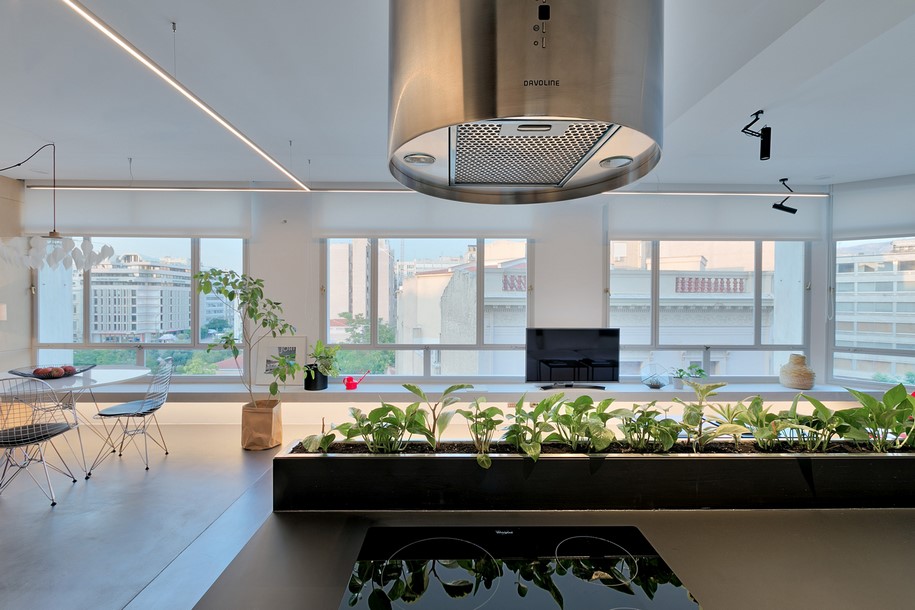 The conceptual idea, thus, is comprised of three primary moves-selections:

Α flowing floorplan, that ensures the full utilization of available space, where activities are kept separate where possible but most importantly feed into each other. 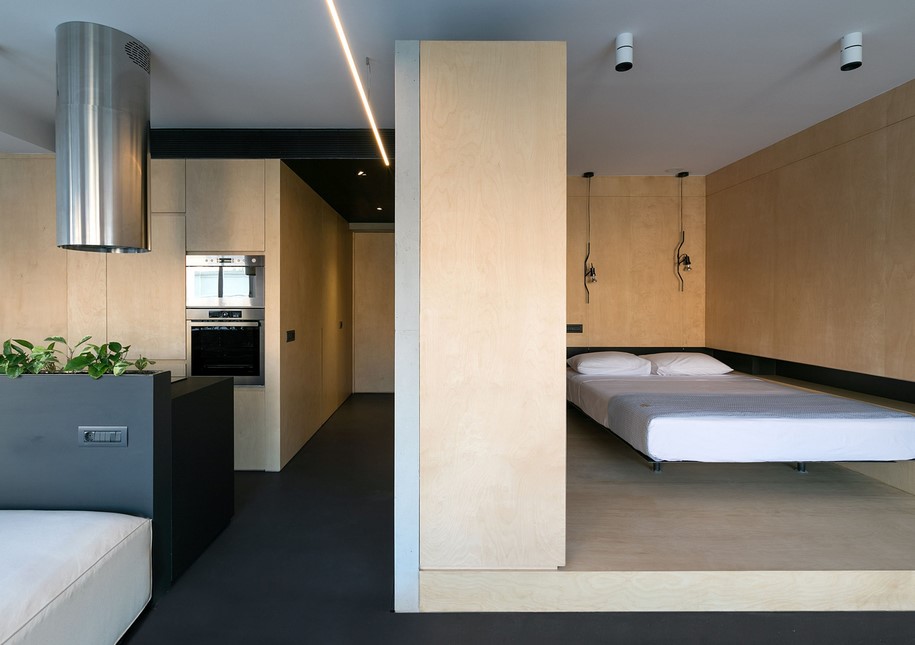 Our aim was to create, in spite of the limited size of the residence, a free and flowing floor plan, which would allow the user and the visitor to perceive the full extent of the apartment. 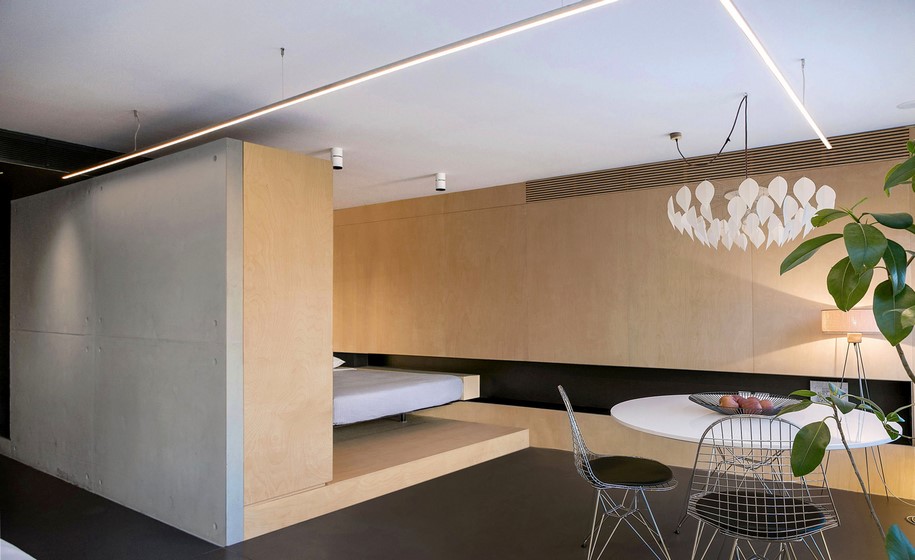 Τhe removal of all structural elements from the apartment’s façade. With the harsh boundary of the intersection along the southern side, the residence naturally directs its gaze towards the north and the view of city. Parallel placement of all functional spaces to the façade (kitchen, storage space, bathroom, bedroom), resulted in a free zone for the living spaces (lounge, working-dining space), creating visual flows and openings towards the city from almost all the spaces in the apartment. 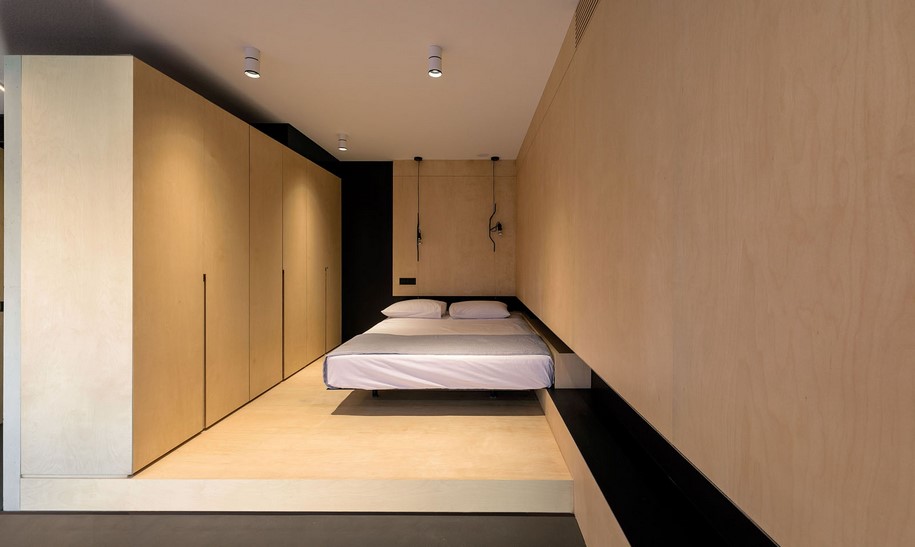 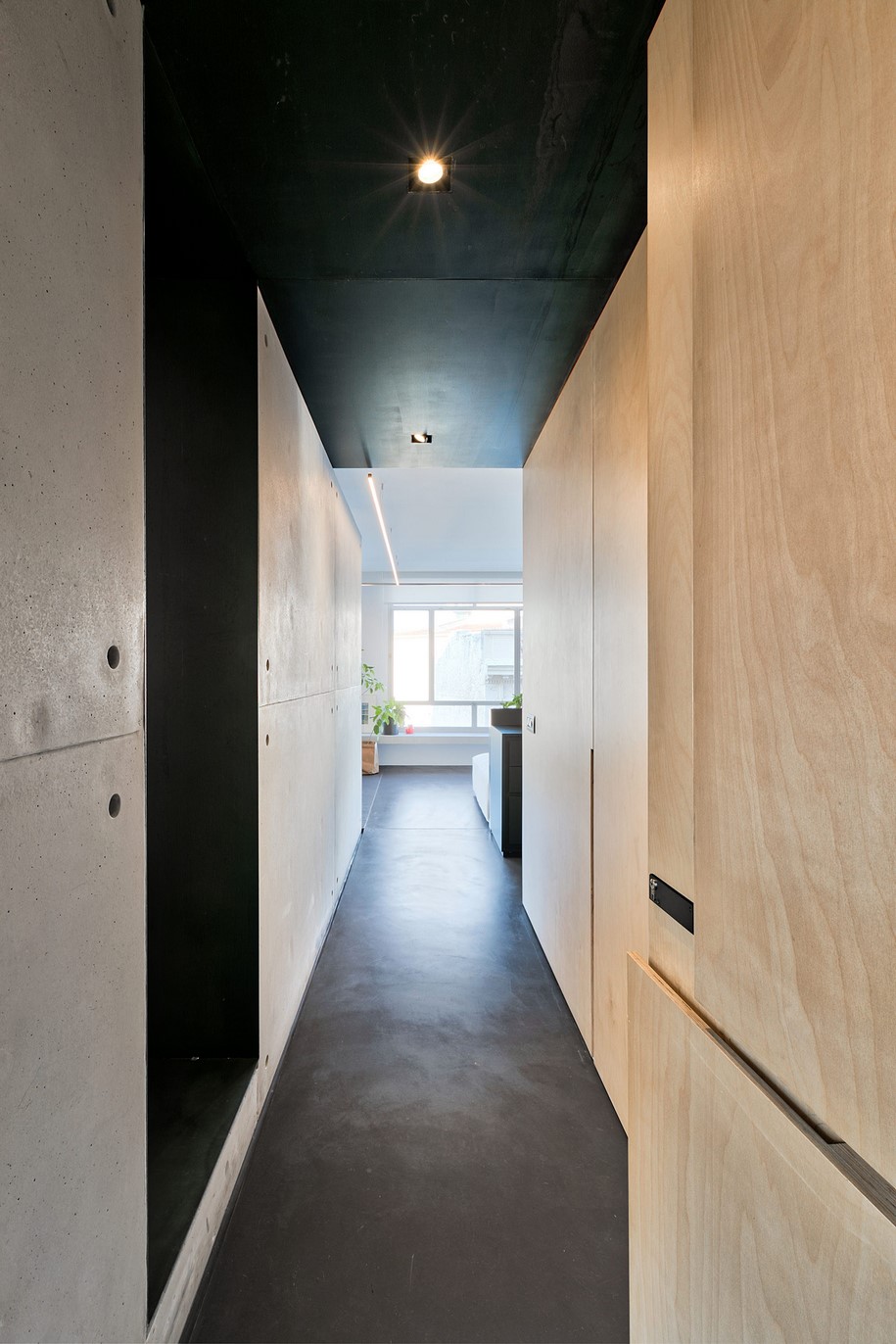 Building the solution on two transverse axes in Τ shape that organize the space by separating and unifying the functional rooms in the floorplan.
The linear wall, which acquires a strong material status (uncoated concrete), realized over the main axis of the entrance, leads to the heart of the residence, crossing the zone of the living areas.  In addition to the wall element, as negative spaces, articulated the triangular wooden prism of the kitchen and storage, as well as the wooden U shaped element that encloses the bedroom.

Materiality has been an important tool in highlighting all the above intentions, providing a distinct and specific character to these functions.
Natural, earthy, rough materials are selected to express the individual structural elements intended to highlight and showcase the architectural language that forms the solution. 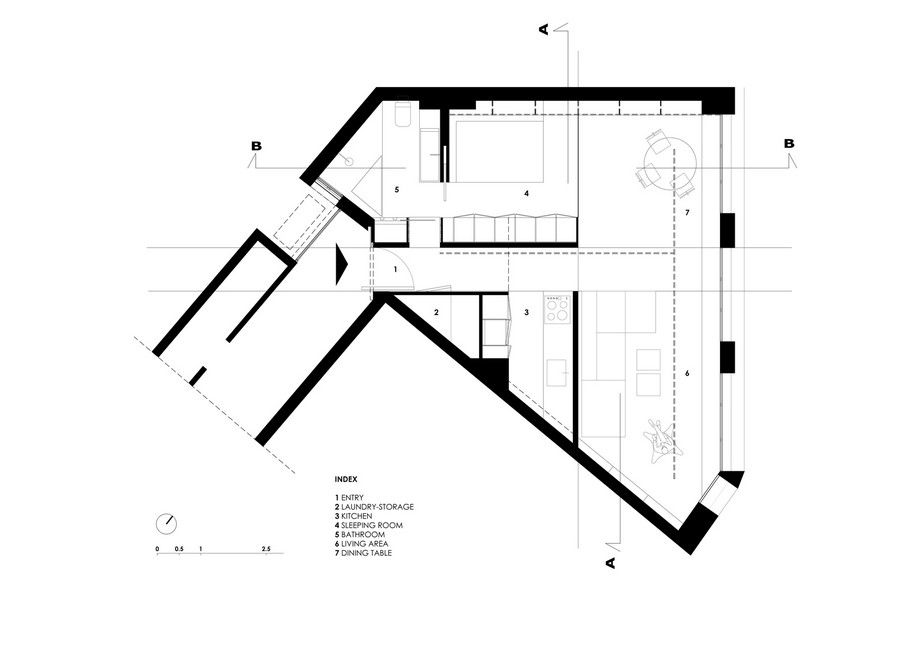 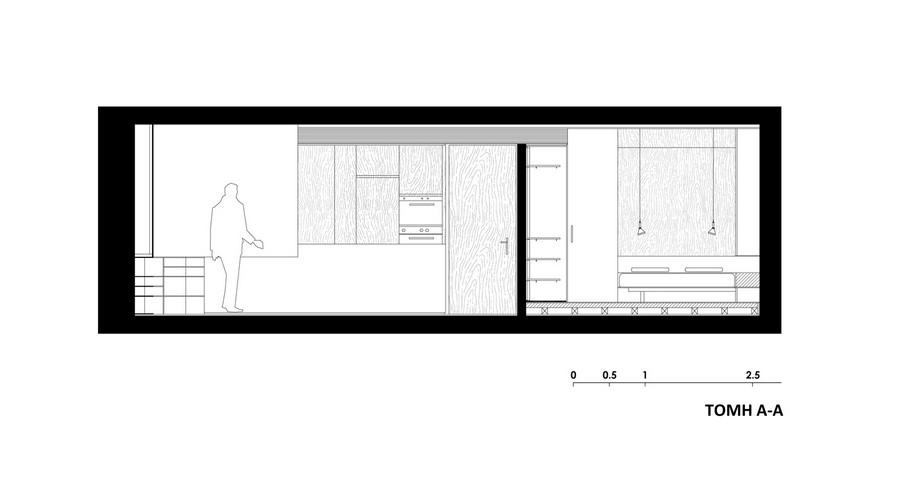 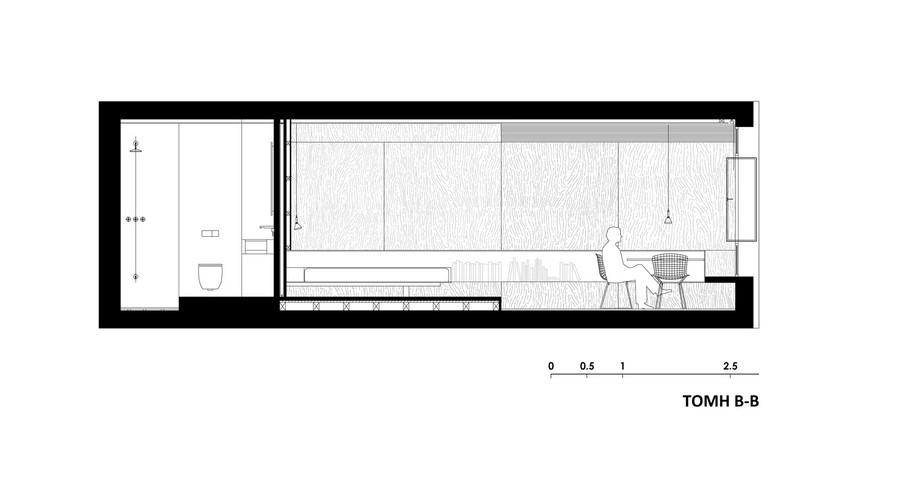 The project received an honourable mention at Architecture awards 2017 by Hellenic Institute of Architecture!