A demanding jury of distinguished professionals with different backgrounds who will evaluate all the works of the EU Mies Award 2022 in a holistic approach, from their conception and construction phases to their final use by the people. They will select 40 outstanding works of architecture from which 5 will become the finalists and, after visiting them, they will appoint the winner of the EU Mies Award for Architecture and the Emerging winner. Topics such as research, urban strategies, crisis scenarios, tourism, architectural culture, aesthetics, sustainability and integration will be discussed taking into account their knowledge and the daily events that shape the way we live in Europe. 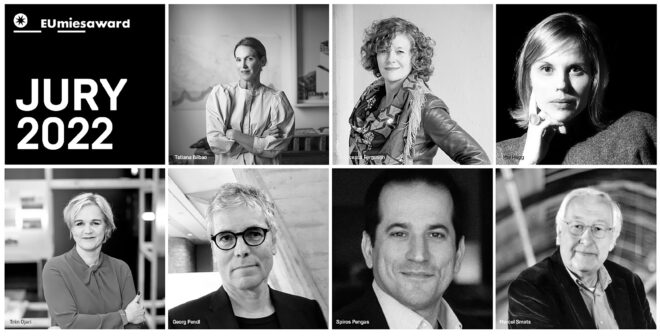 Tatiana Bilbao, chairwoman, architect, began her eponymous studio in 2004. Prior to founding her firm, Bilbao was an Advisor in the Ministry of Development and Housing of the Government of the Federal District of Mexico City. The work of the office intersects with research allowing to design for diverse circumstances and in reconstruction or crisis scenarios. Bilbao holds a recurrent visiting position at Yale University School of Architecture and has taught at Harvard University GSD, Columbia University GSAPP, and many others. Bilbao has been recognized with prizes like the Kunstpreis Berlin in 2012 and Global Award for Sustainable Architecture Prize by the LOCUS Foundation in 2014.

Francesca Ferguson, journalist and curator, founder of the MakeCity Festival for Architecture and Urban Alternatives, Germany’s biggest international festival with 120 events throughout Berlin, with studio talks, tours, panels and exhibitions. She is managing director of Make-Shift, a non-profit agency for architecture communication, process design and new urban strategies; was founding artistic director of Stiftung Stadtkultur, a socio-cultural and architectural foundation for the social housing corporation Howoge AG, in Berlin, 2016-2020; and was the director of S AM (Swiss Architecture Museum, Basel) between 2006 and 2009.

Mia Hägg is an architect and the founder of Habiter Autrement which has designed housing and commercial buildings as well as various masterplans. The approach to innovative public housing has been a particular focus for the practice. In her early career, at Ateliers Jean Nouvel, she was Assistant Project Manager on the Dentsu Tower, Tokyo and at Herzog & de Meuron, Project Manager for the National Stadium of the 2008 Beiijing Olympics. Mia Hägg has been teaching at UCLovain in Tournai and at the Accademia di Architettura in Mendriso. She is regularly invited to join juries and to give lectures at academic institutions internationally and has participated in the Venice Biennale in 2012 and 2016.

Triin Ojari is an art historian and critic and director of the Estonian Museum of Architecture since 2014. She was the editor-in-chief of the Estonian architectural review MAJA between 2001 and 2013 and has published widely on the subject of Estonian 20th century architecture, heritage of the Modern Movement and contemporary architecture and urban planning. Author of the book 21st Century House: New Estonian Residential Architecture (2007), Positions. Articles on Architecture 1992–2011 (2012), Leisure spaces. Holiday and architecture in 20thcentury Estonia (with Epp Lankots, 2020). She is a member of the advisory committee of the EU Mies van der Rohe Award.

Georg Pendl has had his own practice since 1986 and has been CEO of pendlarchitects since 2004. His main field of work is social housing, private housing, private projects, renovation & reuse, commercial buildings, passive house standard. He participated in exhibitions in New York (Architectural league), Venice (Biennale), Vienna (Parliament), Innsbruck (AT). He has been a member of the executive board of the ACE (Architects Council of Europe) and its president since 2018 as well as a member of the Expert group on cultural heritage of the European Commission, initiator of the New European Bauhaus Collective and workshop facilitator at the New European Bauhaus conference organised by the European Commission in April 2021.

Spiros Pengas served as Deputy Mayor for Culture,  E-Governance, Tourism Development and International Relations in Thessaloniki between 2011 and 2019. He reversed Thessaloniki’s cultural profile from an introvert and ethnocentric city into a cosmopolitan, multicultural and open to the world one. He served as President and CEO of the ‘Metropolitan Development Agency of Thessaloniki SA, Deputy President of the ‘Thessaloniki Tourism Organization’, and as member of the board of the ‘Thessaloniki Film Festival’, ‘Thessaloniki International Fair SA’. He has been a frequent and sought-after speaker talking and presenting in international forums and conferences around the world. In 2019, he created Wise Ram, a company which promotes tourism and hospitality growth. He has been cooperating and advising municipalities and regions, organizations and companies on matters of tourism development.

Marcel Smets, architect, urban designer and theorist, Marcel Smets has been actively engaged in the various sides of urbanism. He held the Chair of Urban Design at the University of Leuven and taught at Harvard University Graduate School of Design. He has published pioneering books and as Chief Urban Designer, he headed teams that conducted several urban projects in Belgium, France, Italy and Portugal. His prolonged engagement in Leuven and Nantes, led to the extensive transformation of the Railway Station surroundings on one hand and the urbanistic strategy for the conversion of the Isle de Nantes on the other.
Marcel Smets devoted many efforts to enhancing the quality of public design commissions and promoting the value of collective space. He acted as second State Architect to the Flemish Region, was highly instrumental in Europan, and presided the Scientific Committee of the international Institut pour la Ville en Mouvement.

To find out more, follow us on our web page eumiesaward.com and social media @EUMiesAward (FB, TW, IG)

by ARCHISEARCH EDITORIAL TEAMArchisearchhttps://www.archisearch.gr/wp-content/uploads/holcim_new-370x300.jpg
SHARE THIS PAGE
WITH YOUR FRIENDS