BUREAU designed the world of ‘Distant Lights’ where walls and floors converse in landscape mode with extruded plinths and strolling visitors. In a certain way, it is a very general and discrete promenade into the diversity of art formats and supports purposely confusing and blurring the limits of sculpture, painting, photography, frescos, installation art, film and video art. Distant Lights, the rich work of Nuno Cera.

A strange moment for the town of Sines to host Distant Lights, the rich work of Nuno Cera – a quasi-native of the place and someone who has travelled extensively, eyes wide open around the world. We are living a moment in history where the path of fossil energies has again made a turn … back, as the dramatic Ukrainian war seems to bifurcate towards an already confirmed anthropocentric destruction. How much Sines is reacting positively or negatively to this turn is unknown to us, but Nuno’s Distant Lights might have a broader and more urgent reach than what he initially imagined when starting the creative process of the exhibition, before the Ukrainian war.

The title of the show opens the door to a quite complex history of Portugal, one that is built on the expectations of what comes and goes from and into the ocean.

A history of global and distant relations, violent at times, is significantly anchored in this little town as it is the birth place of a crucial actor of the conquering fifteenth century. Sines is Nuno Cera’s familiar landscape, but it would not matter so much if it wasn’t. The printed and filmed preoccupations Nuno has developed over the years converse perfectly with the contrasted lieu that has now exchanged the very physical and heavy wooden ships led by Mr de Gama for submarine cables spitting data at the highest speed.

Space, like countries and politics, is not neutral. White and architectural neo-minimalism has nothing to do with neutrality.

Once temples of knowledge and culture, museums seem to struggle in abandoning this ancient status to favour their more public vocation. The temple is also the perfect framework to a quite tech-box environment supporting the growing technological and security requirements of the art world.

The thick and often opaque walls of these structures belong to the architectural typology of the monument, protecting art and knowledge within a very enclosed interior rather than producing public dialogue reflected by openness.

The case of the Centro de Arte de Sines is no exception; following a certain “Zeitgeist” that makes these spaces exceptional, and exceptionally and beautifully hermetic. The architecture of the Museum is also very concerned with lights, complying to a historical definition of the discipline that presents the “the masterly, correct and magnificent play of masses brought together in light”. Whether this definition is of any interest today is not so relevant here, but the architecture of Aires Mateus in Sines has made a point to identify itself within this cultural-historical identity. Obviously, Nuno Cera inscribes himself into the space, the title implying that he will be dealing with another sort of light, probably, distancing himself or escaping from any preconceived and too determined definition of a specific field.

The term was coined by Marcel Duchamp to point out perceptive complexity and suggest that art’s role might just be to clarify, clean, polish, or simply reveal certain situations. It also refers to how we move and navigate from two to three to four-dimensional spaces.

The Centro de Artes Sines is a scaled 1:1 model where one enters an Alice in Architecture wonderland, a protected space for daydreaming with light. Ultrathining could be the act of possibly allowing and helping the visitor modify their scale of perception, entering the model and wandering through it.

Going down the rabbit hole to find Nuno’s world and defy scalar “gravity”, adjusting perception to the very different situations that the work relates to, zooming in and out continuously, adjusting the lens to what the images have to offer and propose. The works imagine worlds – walls and floors converse in landscape mode with extruded plinths and strolling visitors. In a certain way, it is a very general and discrete promenade into the diversity of art formats and supports purposely confusing and blurring the limits of sculpture, painting, photography, frescos, installation art, film and video art. It could be that Nuno’s work is all about framing and connecting; bringing forward and sewing together particular situations he encounters. Our work as exhibition designers has been to accompany the work and visitors in the promenade of the bonding frames.

All of it within the thinnest possible intervention: 0.1 mm. 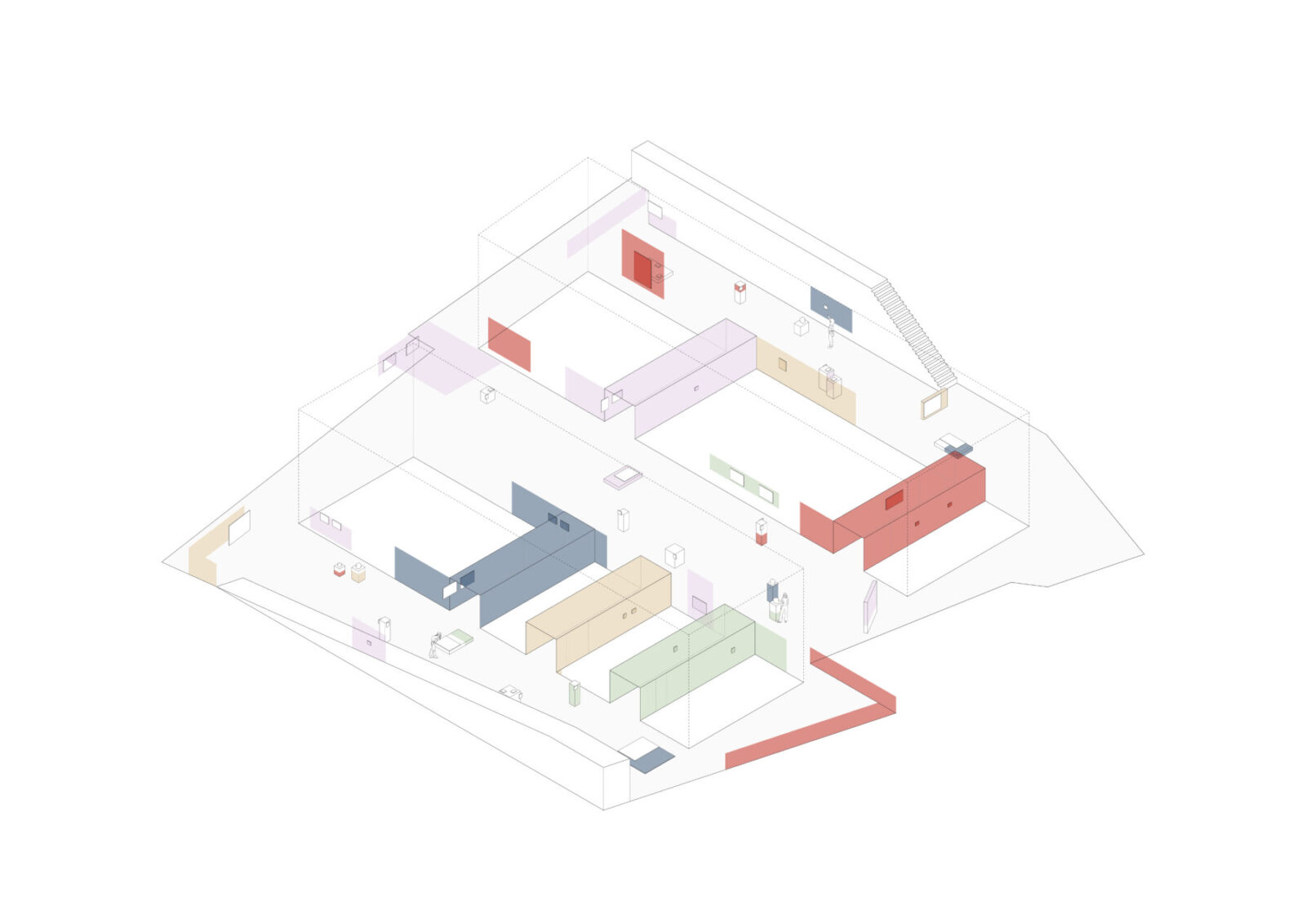