Architects Harris Vamvakas, Padelis Kyriakou and Errikos Ioannidis along with OCA Architects participated at the open architectural competition “Redesign of Aristotelous Square and Axis” in Thessaloniki with ‘Triangular Affairs’, a design proposal aiming at the harmonious blending of the old monumental design language with a new, more playful and contemporary one thus creating a lively public space where all aspects of urban life are welcomed. 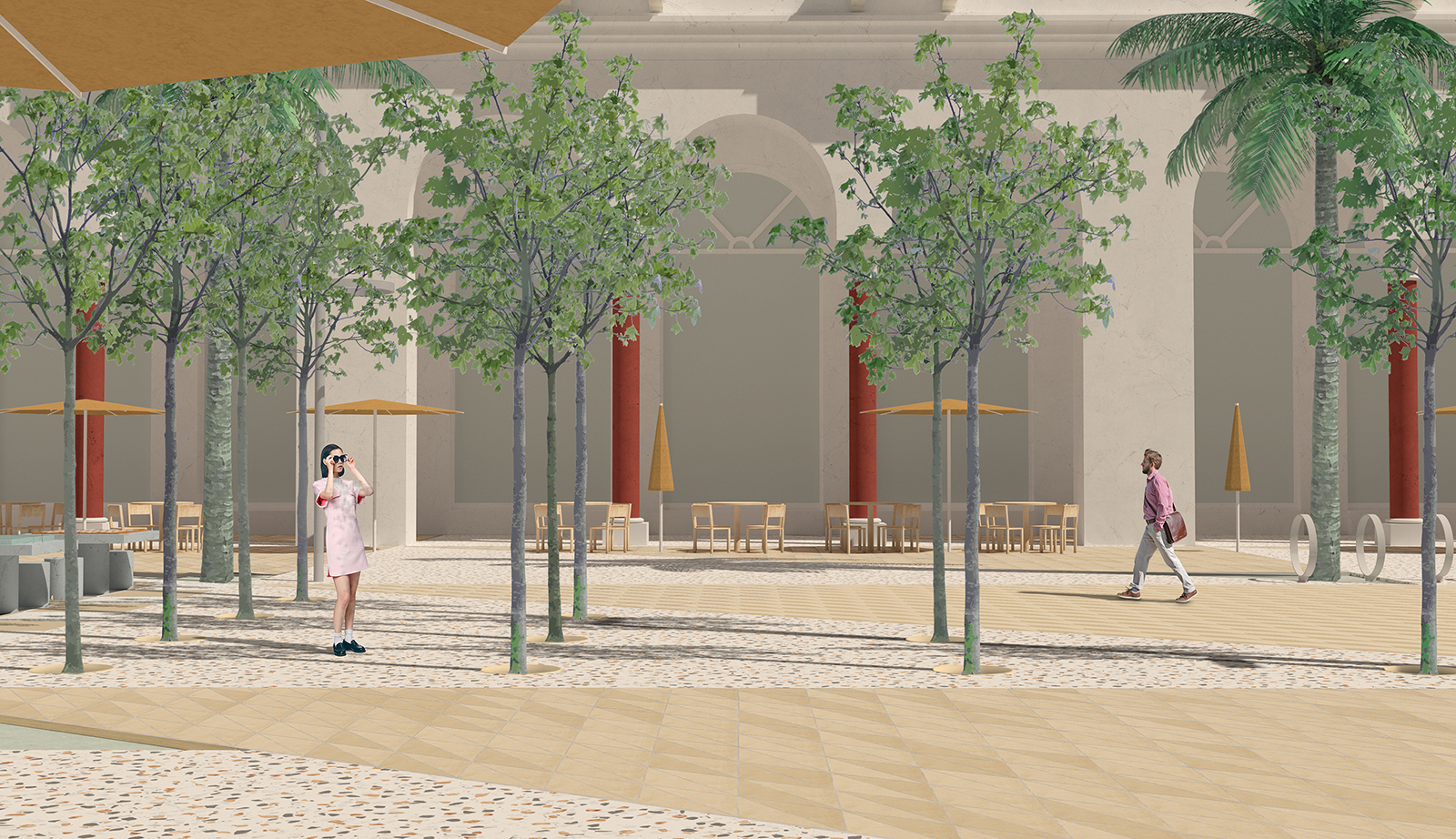 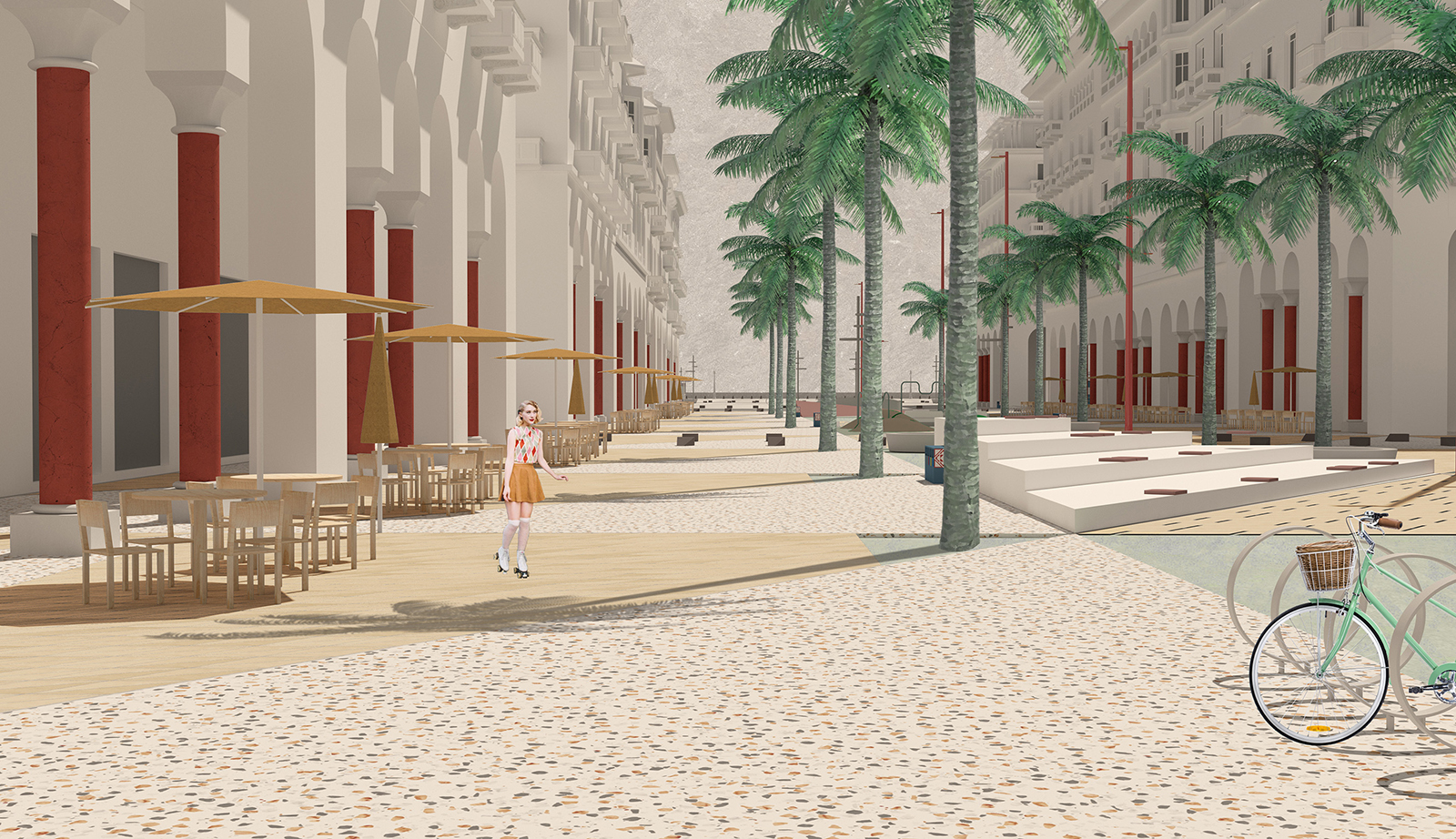 The concept of our proposal lies on two main parameters: the preservation of Aristotelous axis’ monumentality and the urban qualities of its current design on the one hand while introducing a series of interventions in order to subtly solve the square’s accessibility problems, implement a contemporary and inviting design language and redefine this main square as the core of the city center on the other. 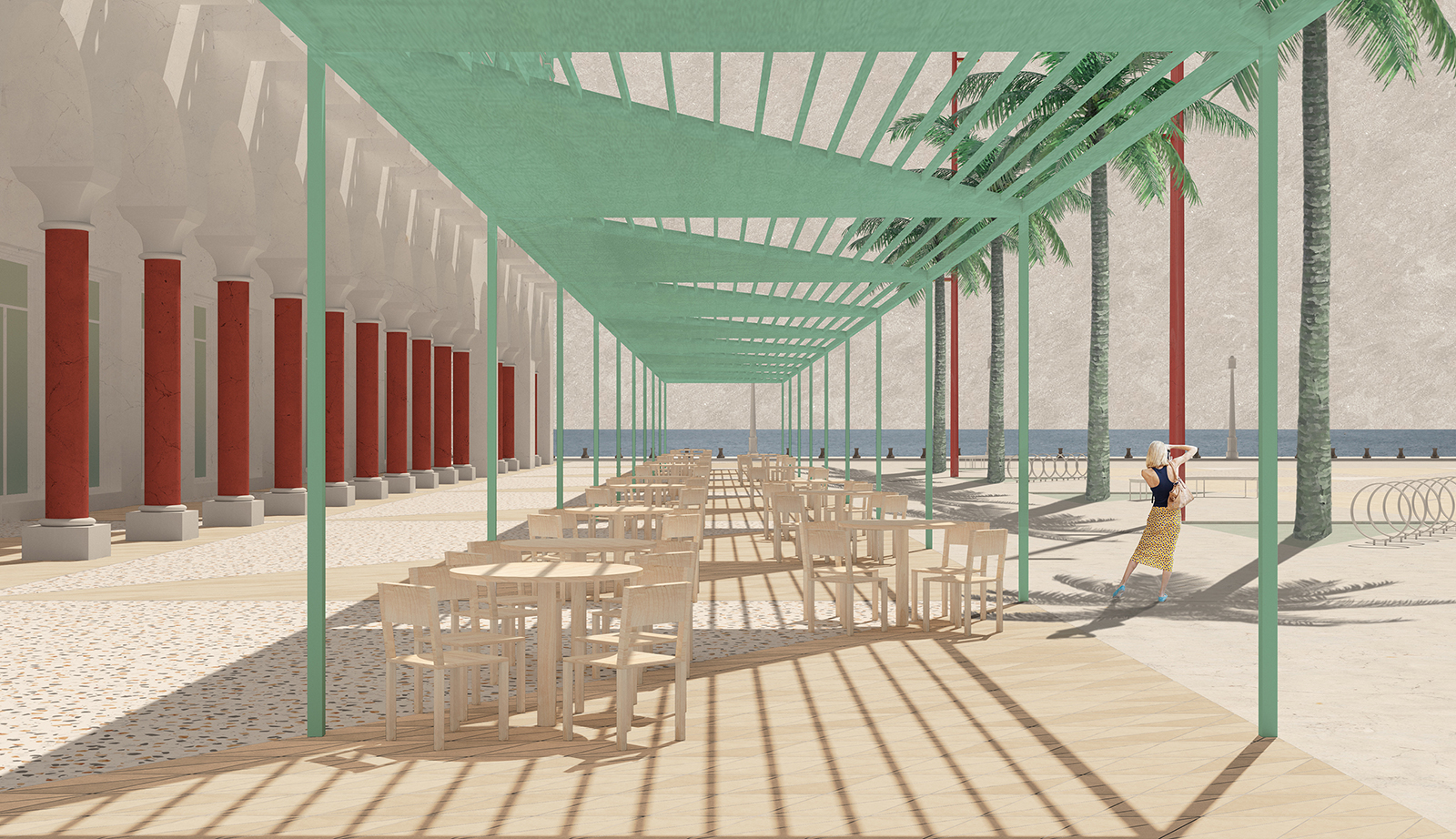 In order to do so, we first examine the square’s current structure which is based on a rectangular, quite often asymmetrical, grid stretching between the two galleries at each side of the axis while a green elevated parterre dominates at its center all across its length from Egnatia Street to the main Square in the South. The current structure while monumental and generally in line with Ernest Hébrard’s emblematic architectural and urban design it has some major problems: 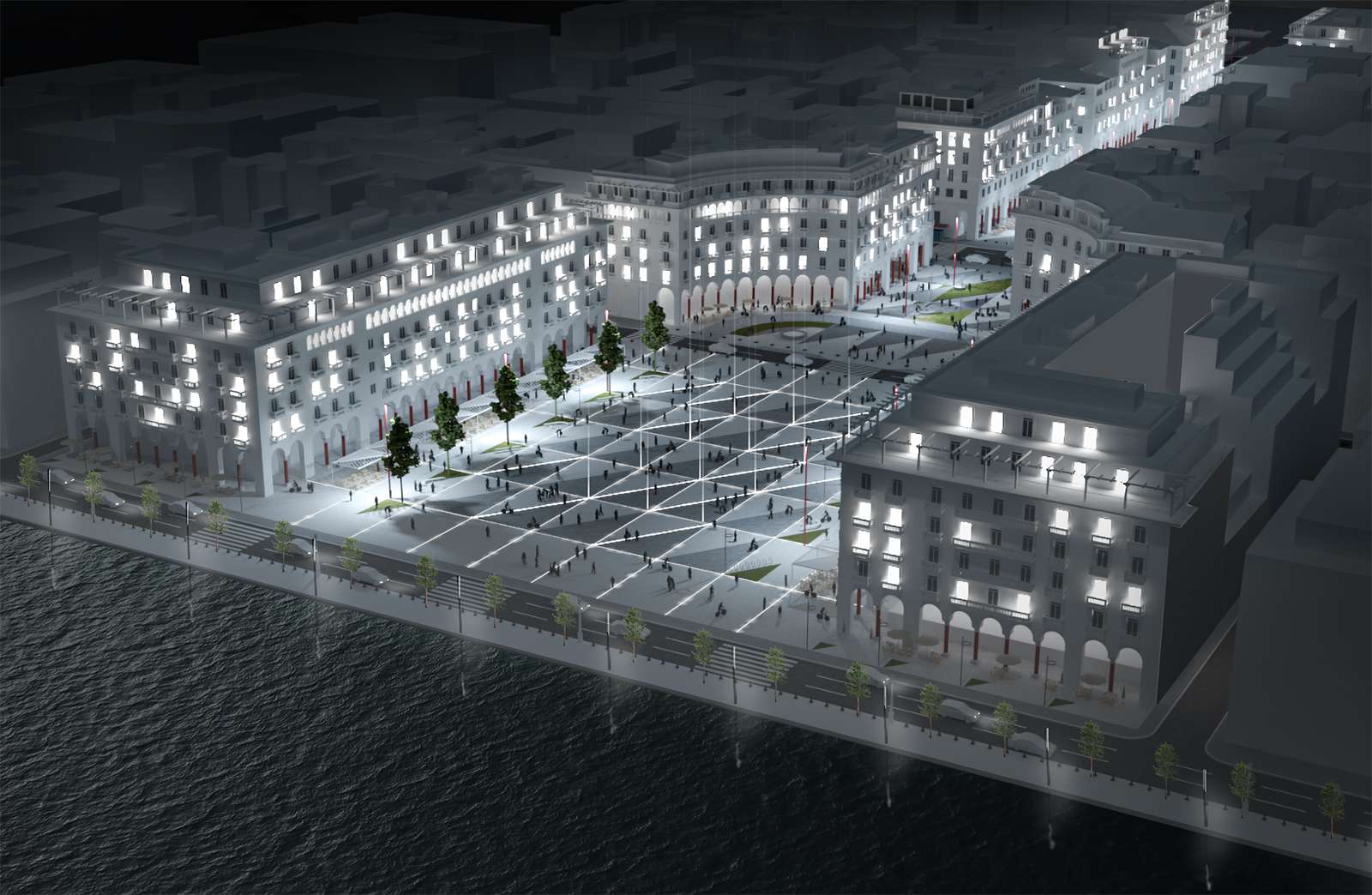 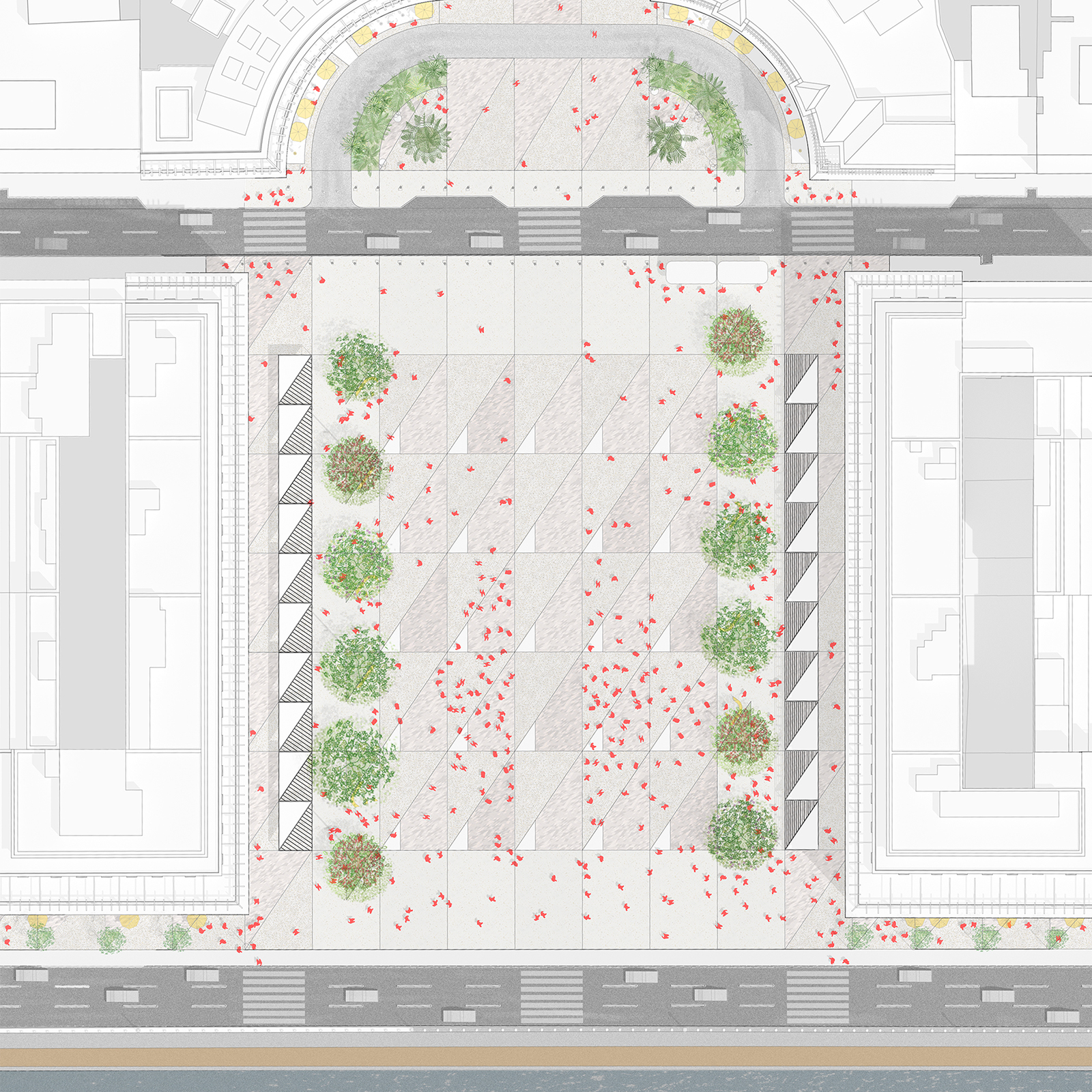 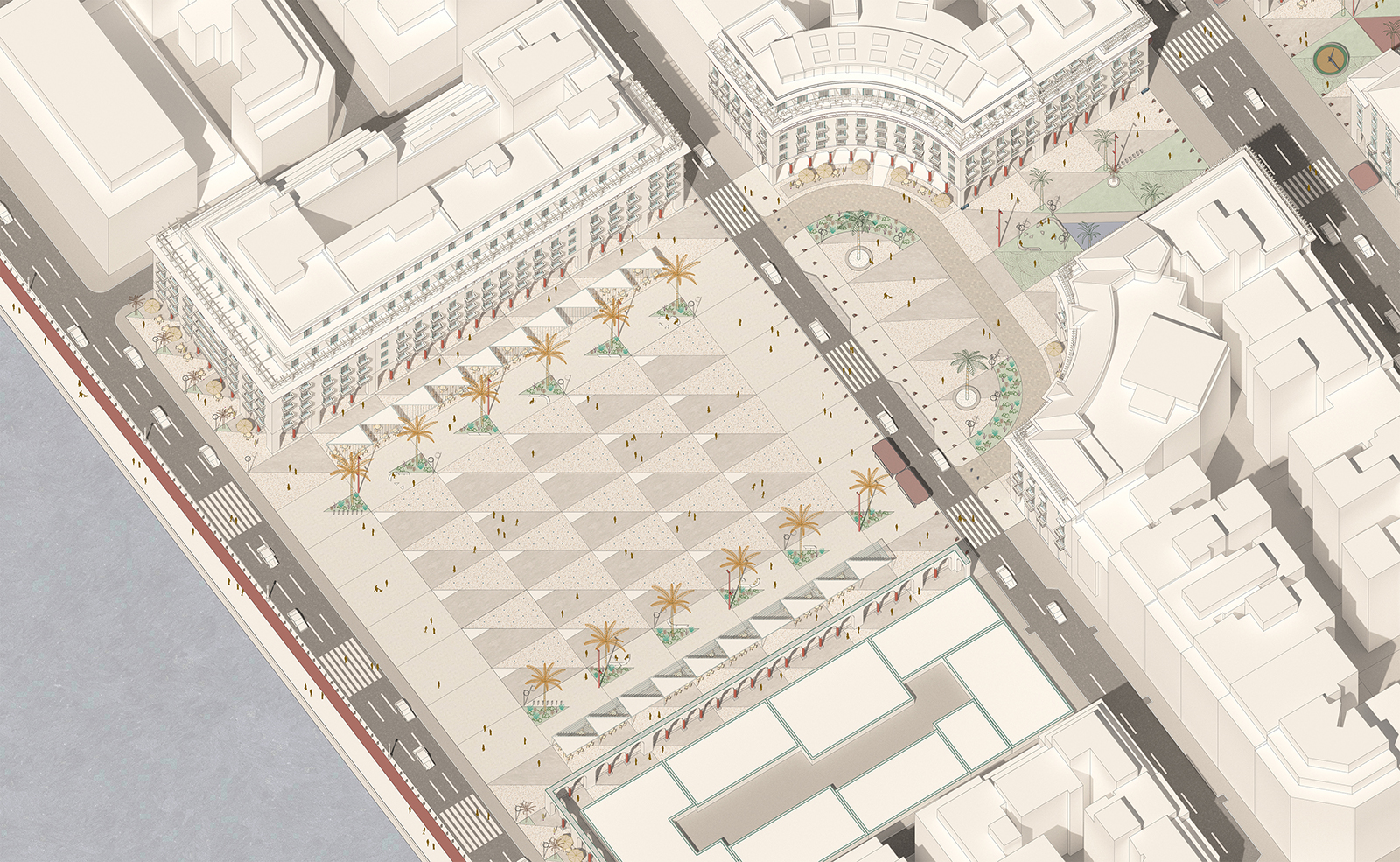 First step in our design approach was to restructure the grid in order not only to make it even and symmetrical all across the axis but also expanding it to both ends of it, into the northern and the southern square respectively. A secondary grid of diagonal lines is then created as a supplementary to the main one, creating smaller triangular cells. The reason behind the specific design gesture is twofold. Firstly, it separates the old monumental design that still exists in the main grid from the new more playful and contemporary design language that harmoniously blends with the former. Secondly, it creates a more human scale where little urban gardens, living rooms, playgrounds, fountains and other functions take place. 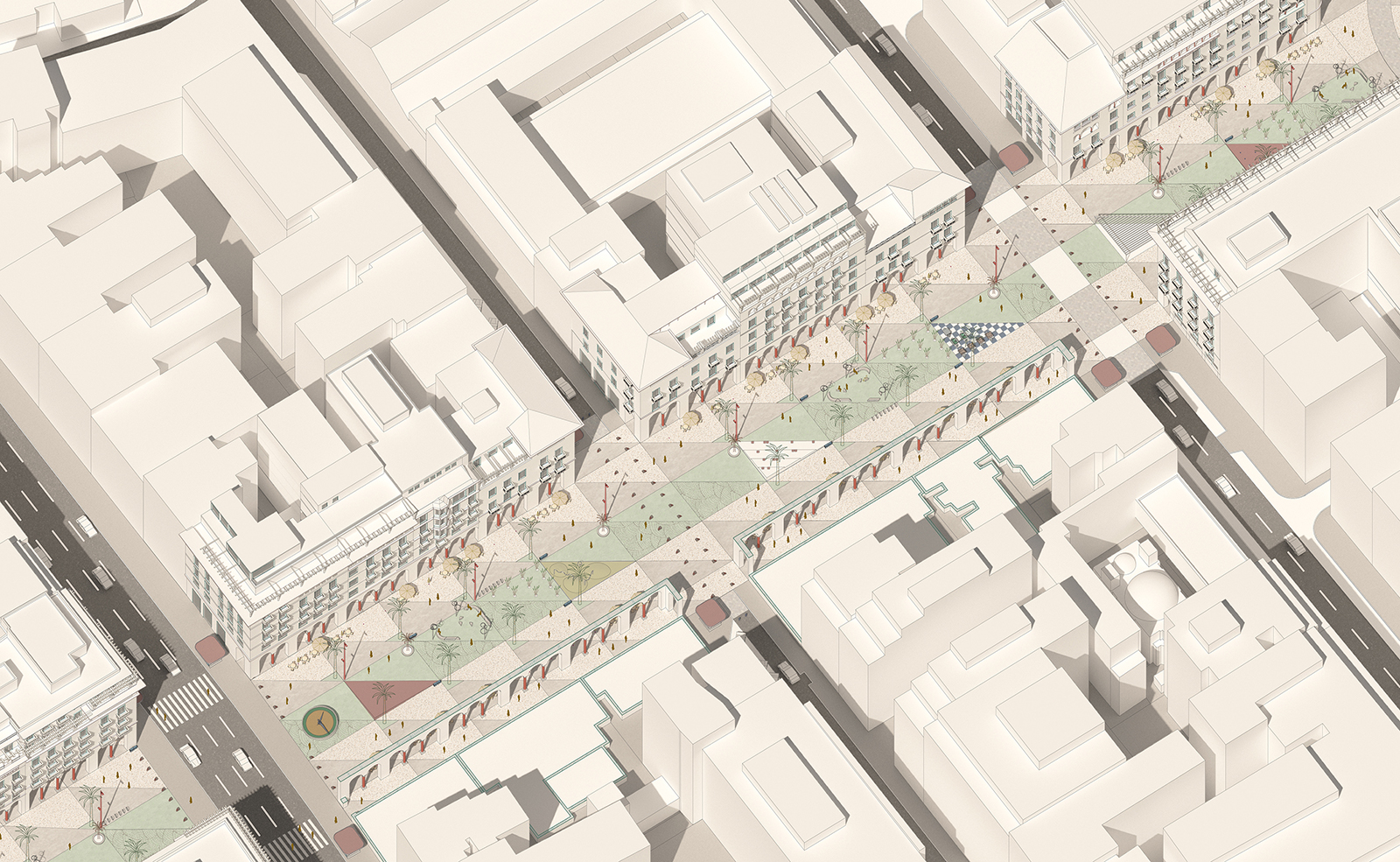 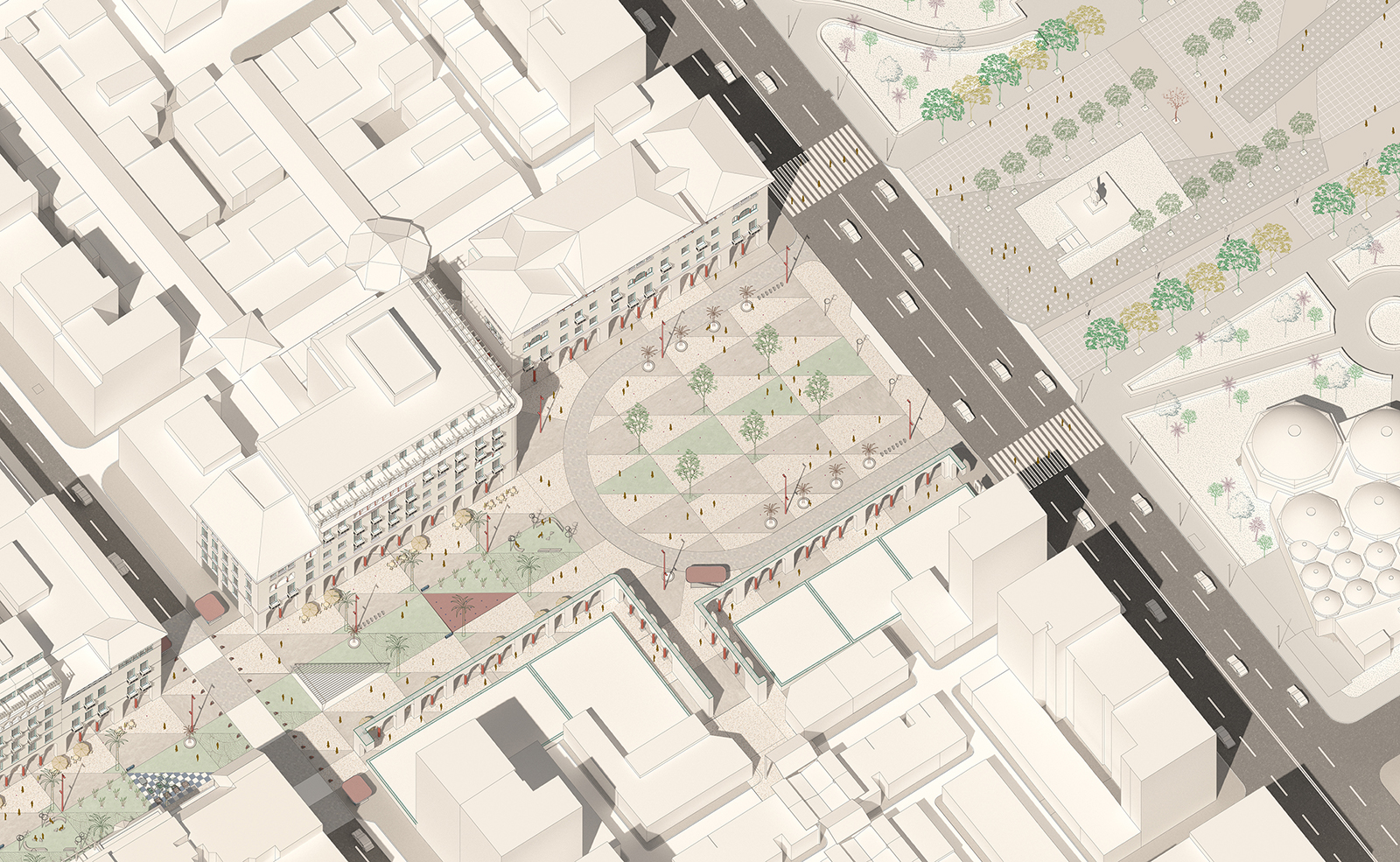 In other words, the main rectangular grid refers to the historic and monumental surroundings of Aristotelous while the diagonal ones create an inviting and cosy environment for the people that move along it. 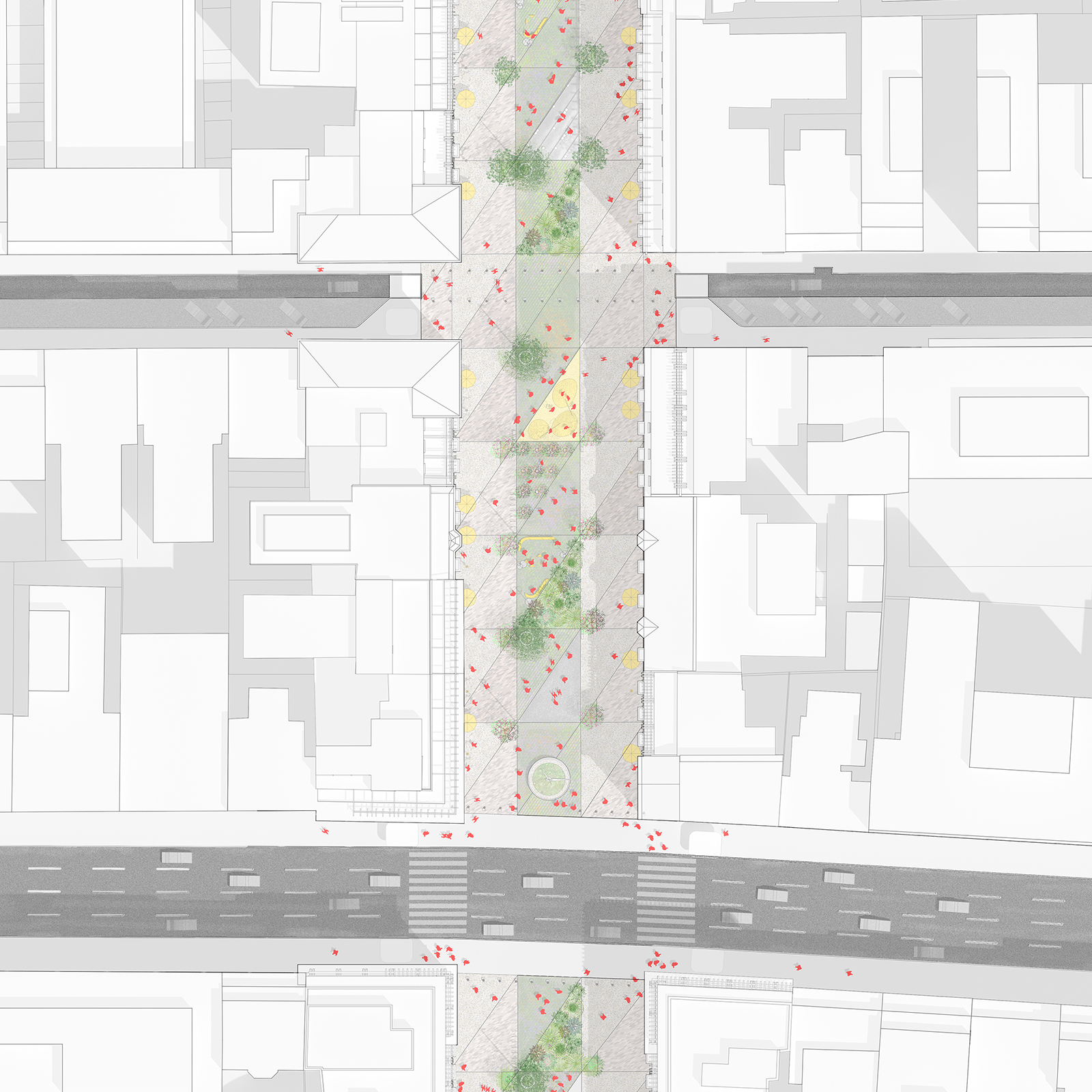 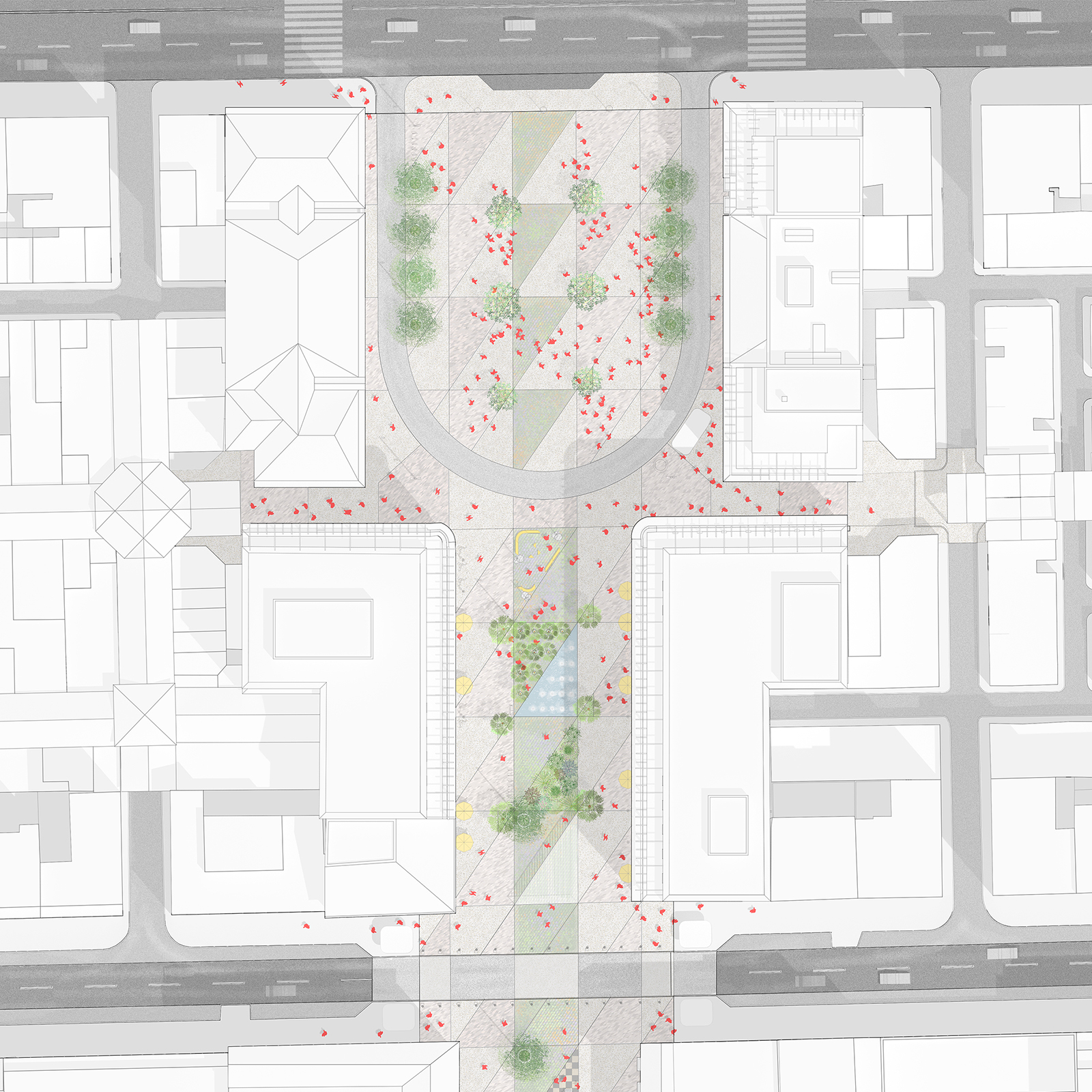 In terms of materiality, a special terrazzo is being implemented using the square’s former tiles (orange, black and red marbles) as aggregates which fills in the majority of the triangular grid cells while durable concrete tiles are being suggested for the remaining cells. Whatsmore, the central parterre is brought down to the same level as the rest of the square and it is paved with permeable tiles varying from fully permeable to almost solid throughout its length.

That creates an accessible green zone with different spatial qualities and vegetation depending on the level of permeability.

All urban furniture is designed in accordance with the main features of our proposal described above. Infrastructural as well as other pieces of primary importance like bus stops, lighting poles, pavilions and kiosks are placed on the main grid. At the same time a series of secondary furniture are nested into the triangular cells like benches and tables, ponds and little trees, playground furniture, steps and ramps that create informal spaces where different episodes can take place. 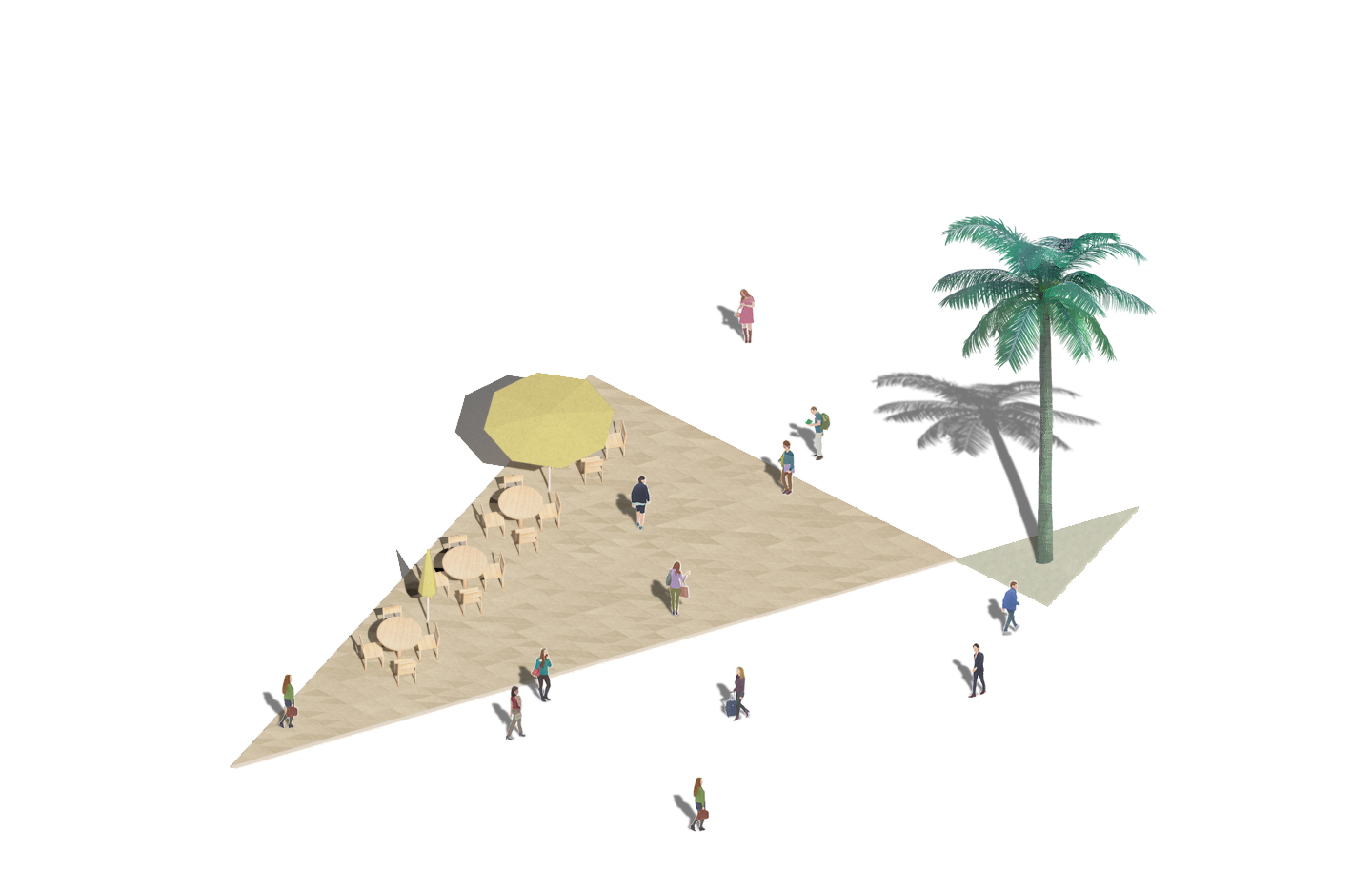 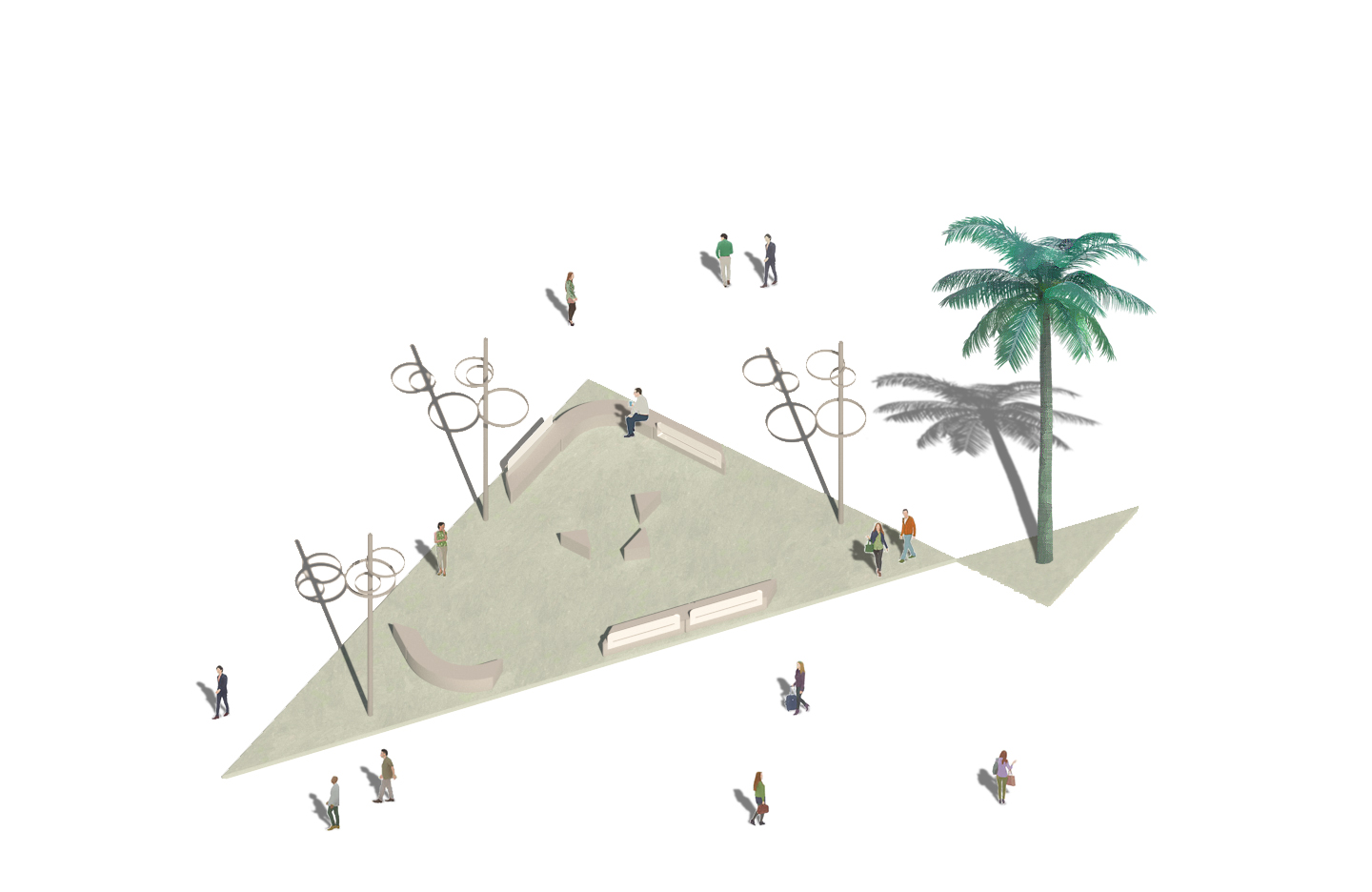 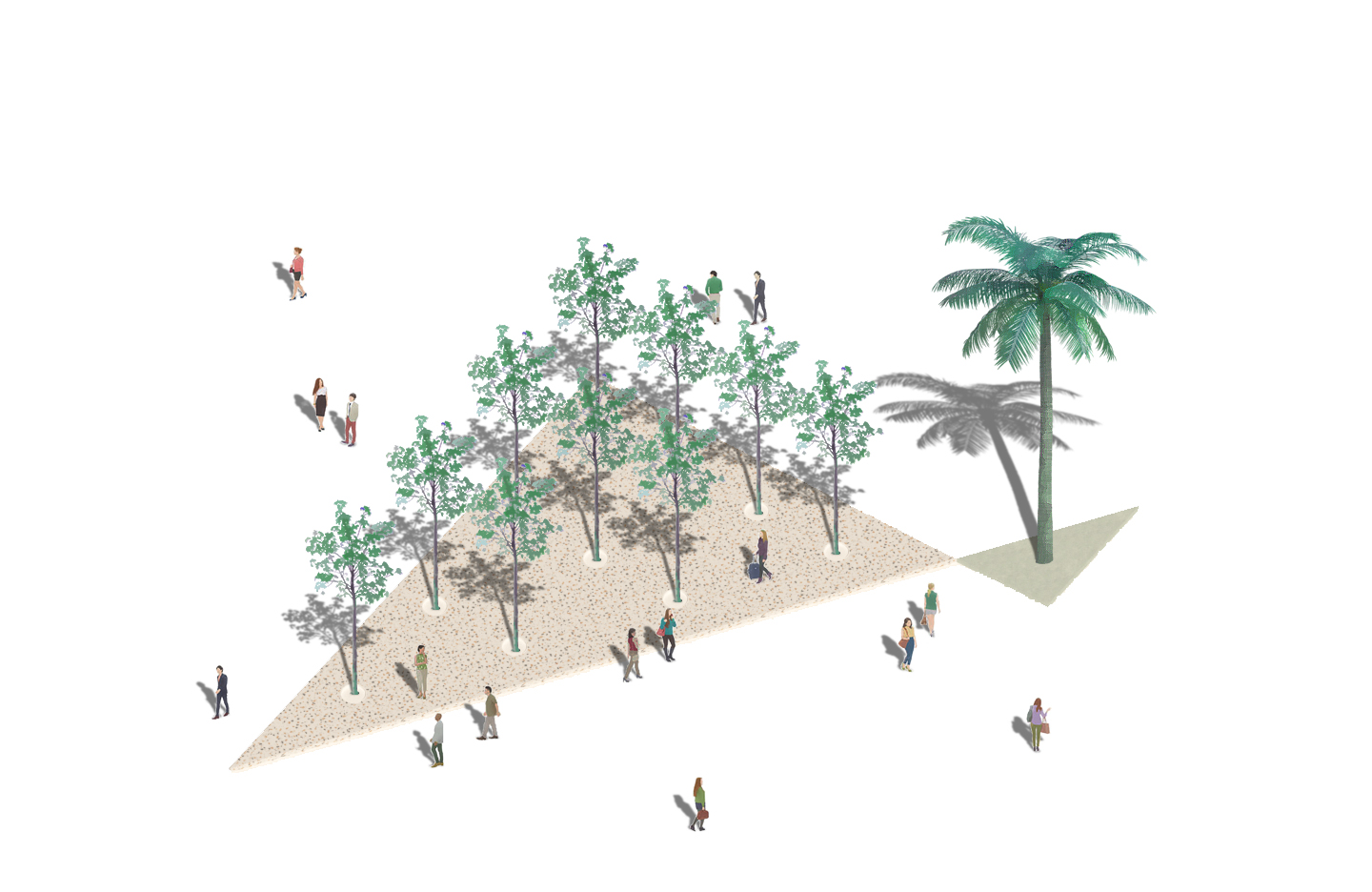 Thessaloniki is a city of different qualities, various scales and many speeds built throughout several historic periods. It is exactly that spirit we tried to embrace in “Triangular Affairs”  by corresponding to different urban scales while creating a coherent and legible design language for this highly important urban space at the very core of the city. 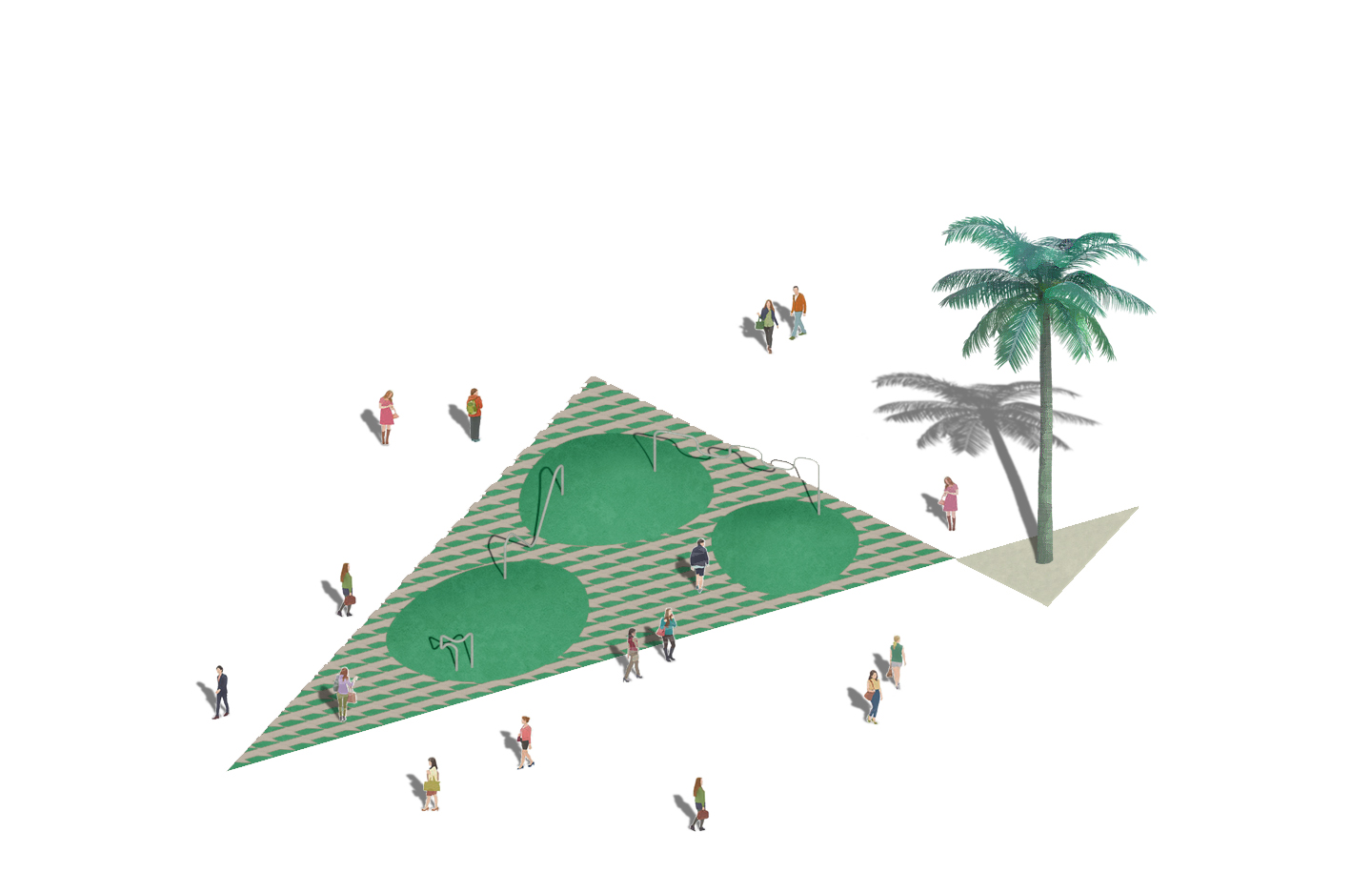 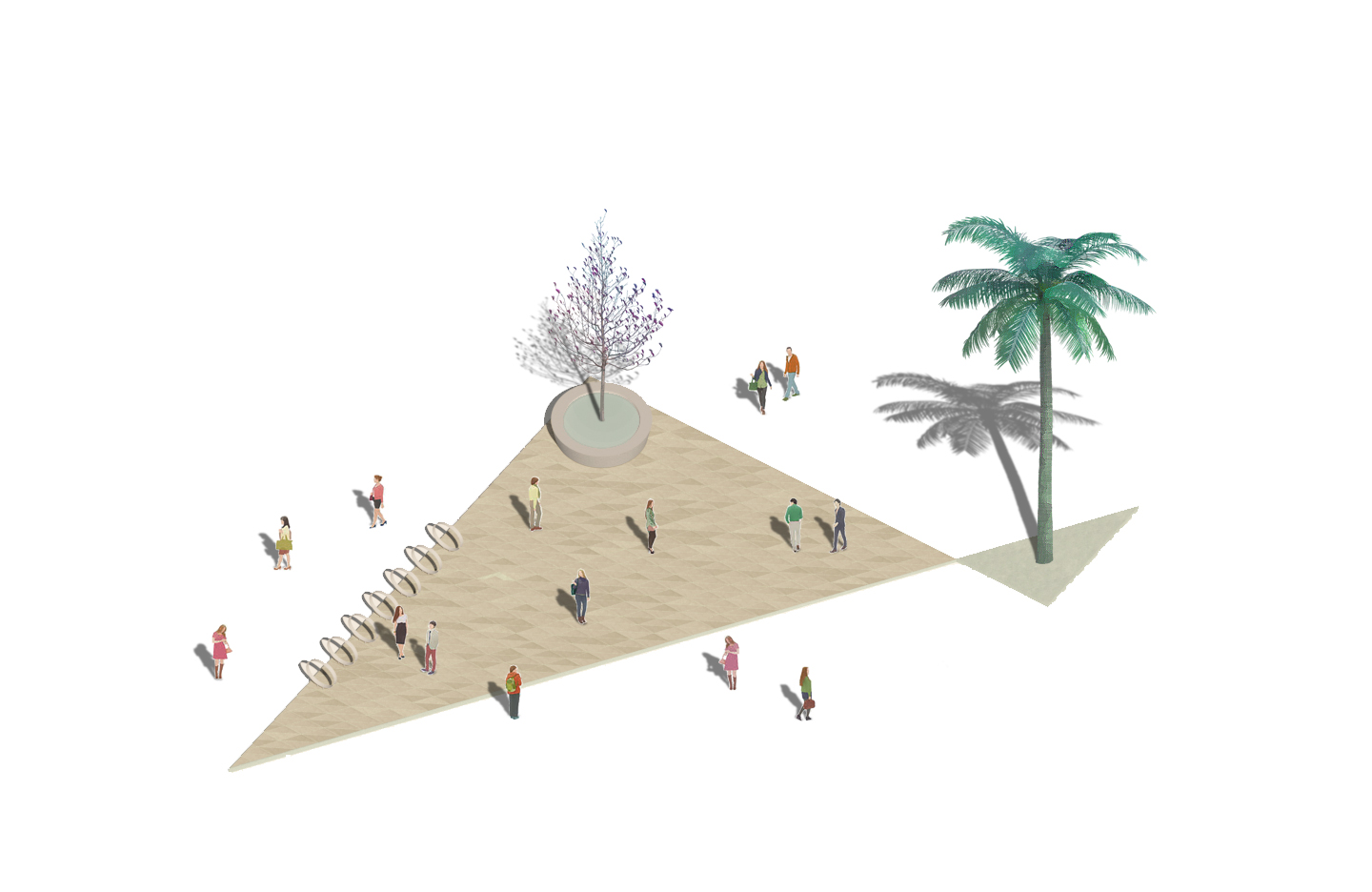 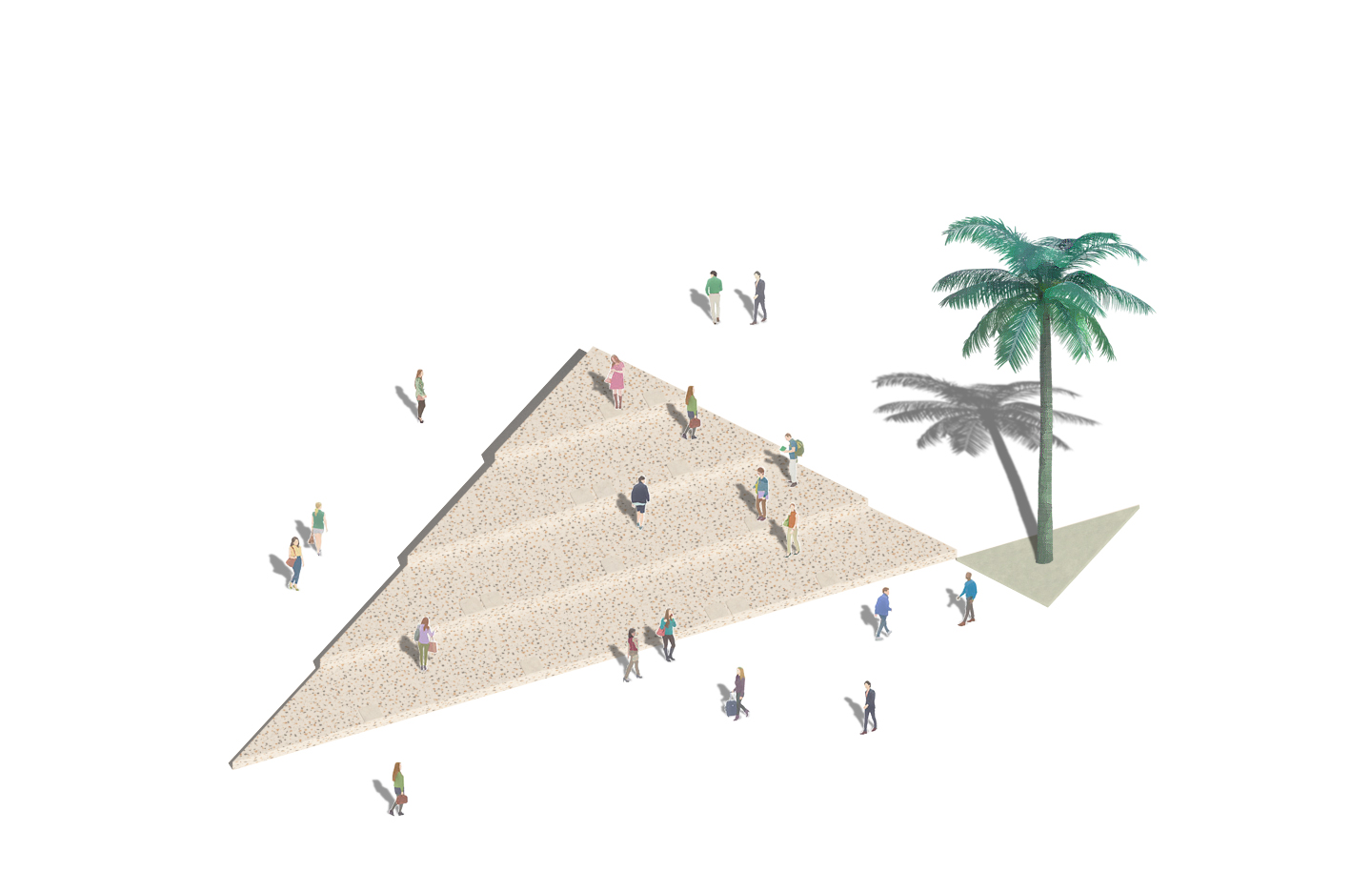 
Check out, also, ‘Memory Threads’, the winning proposal of the open architectural competition “Redesign of Aristotelous Square and Axis”, here!

by ELENI TSIRINTANIArchisearchhttps://www.archisearch.gr/wp-content/uploads/06_Render_Dimarxeio_1-370x700.jpg
SHARE THIS PAGE
WITH YOUR FRIENDS