ArXellence 2, ALUMIL’s international architectural ideas competition, was successfully completed. The open call to the global architectural community concerned the redevelopment of the western coastal side of Thessaloniki through a new Central Business District (CBD) that would redefine a misused area of the city.

The entry of George Anagnostopoulos in ArXellence 2 aims to design a building, which will be experienced from both near and afar, being visible from different areas of Thessaloniki thus symbolizing the upcoming power of the city.

The organic form of the building aims in that direction: the building slowly rises from the ground -like a living creature- and expands up to an enormous height, in order to symbolize that the city grows radically and continuously.

It also “floats” among the existing buildings, following an organic shape, like it “moves” between them. 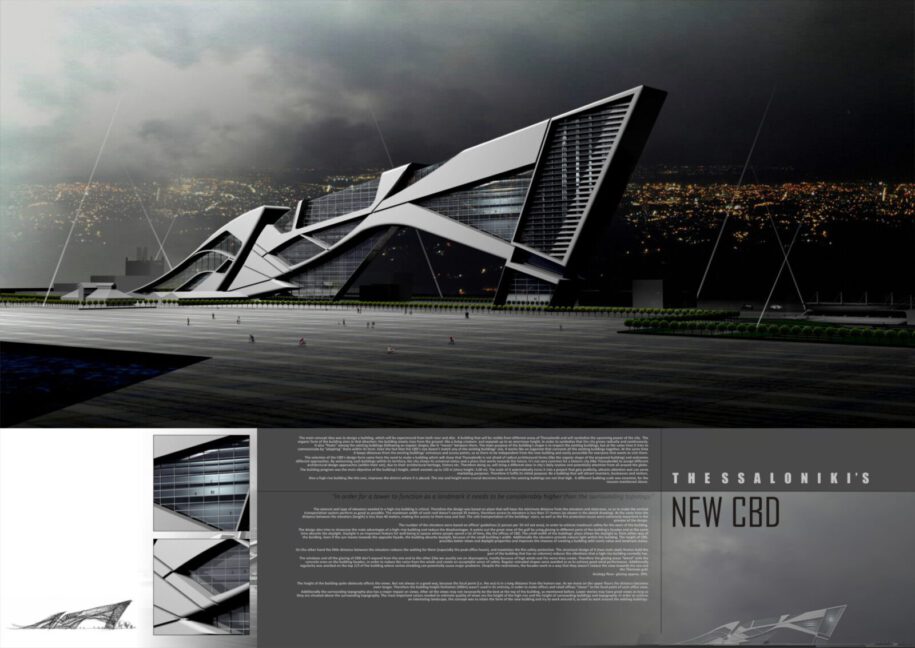 The selection of the CBD’s design form came from the need to make a building which will show that Thessaloniki is not afraid of radical architectural forms (like the organic shape of the proposed building) and welcomes different approaches. By welcoming such buildings within its territory, the city shows its universal status and a place that works towards the future. It’s not very common for a historic city (like Thessaloniki) to accept different architectural design approaches (within their net), due to their architectural heritage, history etc. Therefore doing so, will bring a different view in city’s daily routine and potentially attention from all around the globe. 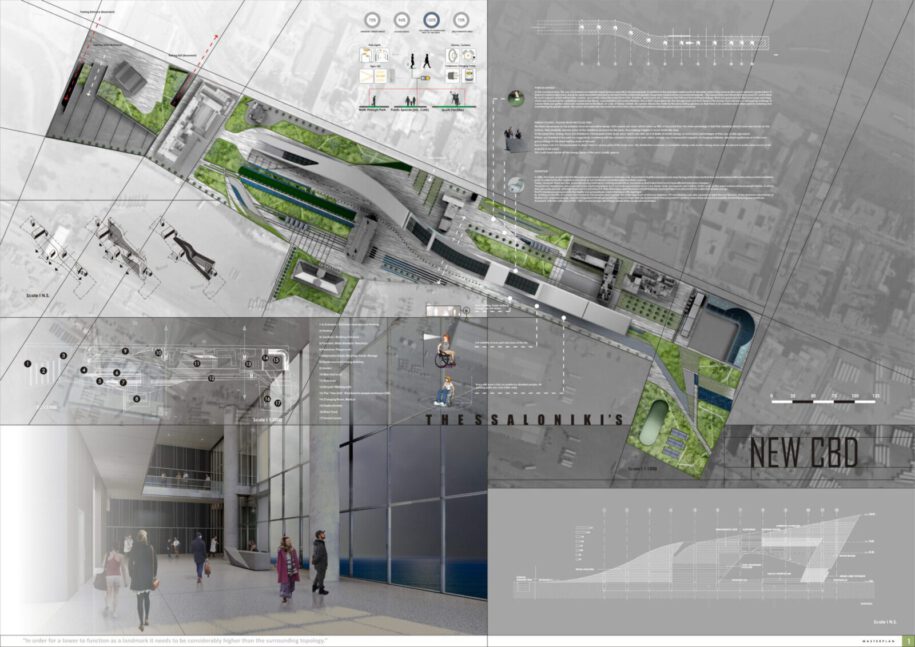 The building program was the main objective of the building’s height, which exceeds up to 120 m (story height: 3.00 m). The scale of it automatically turns it into a project that gets publicity, attracts attention and can serve marketing purposes. Therefore it fulfils its initial purpose: Be a building that will attract investors, businesses and visitors.

Also a high-rise building like this one, improves the district where it is placed.

The size and height were crucial decisions because the existing buildings are not that high. A different building scale was essential, for the reasons mentioned above. The amount and type of elevators needed in a high-rise building is critical. Therefore the design was based on plans that will have the minimum distance from the elevators and staircases, so as to make the vertical transportation system perform as good as possible. The maximum width of each roof doesn’t exceed 35 meters, therefore access to elevators is less than 17 meters (as shown in the sketch drawing). At the same time the distance between the elevators (length) is less than 40 meters, making the access to them easy and fast. The safe transportation of the buildings’ users, as well as the fire protection issues were extremely important in the process of the design. The number of the elevators were based on offices’ guidelines (1 person per 10 m2 net area), in order to achieve maximum safety for the users of the building.

The design also tries to showcase the main advantages of a high–rise building and reduce the disadvantages. It points out the great view of the gulf by using glazing in different parts of the building’s facades and at the same time absorbs the daylight. Daylight is an important feature for well-being in spaces where people spend a lot of time, like the offices of CBD. The small width of the buildings’ plans allows the daylight in, from either way of the building. Even if the sun moves towards the opposite façade, the building absorbs daylight, because of the small building’s width. Additionally the elevators provide natural light within the building.

The height of CBD, provides better views and daylight properties and improves the chances of creating a building with iconic value and landmark status.

On the other hand the little distance between the elevators reduces the waiting for them (especially the peak office hours), and maximizes the fire safety protection. The structural design of it (two main static frames hold the part of the building that has no columns) reduces the vibrations that a high-rise building normally has. The windows and all the glazing of CBD don’t expand from the one end to the other (like we usually see on skyscrapers), mostly because of high winds and the noise they create. Therefore the glazing areas “blend” with the concrete ones on the building facades, in order to reduce the noise from the winds and create an acceptable sense of safety. Regular extruded shapes were avoided so as to achieve good wind performance. Additionally regularity was avoided on the top 1/3 of the building where vortex shedding can potentially cause major problems. 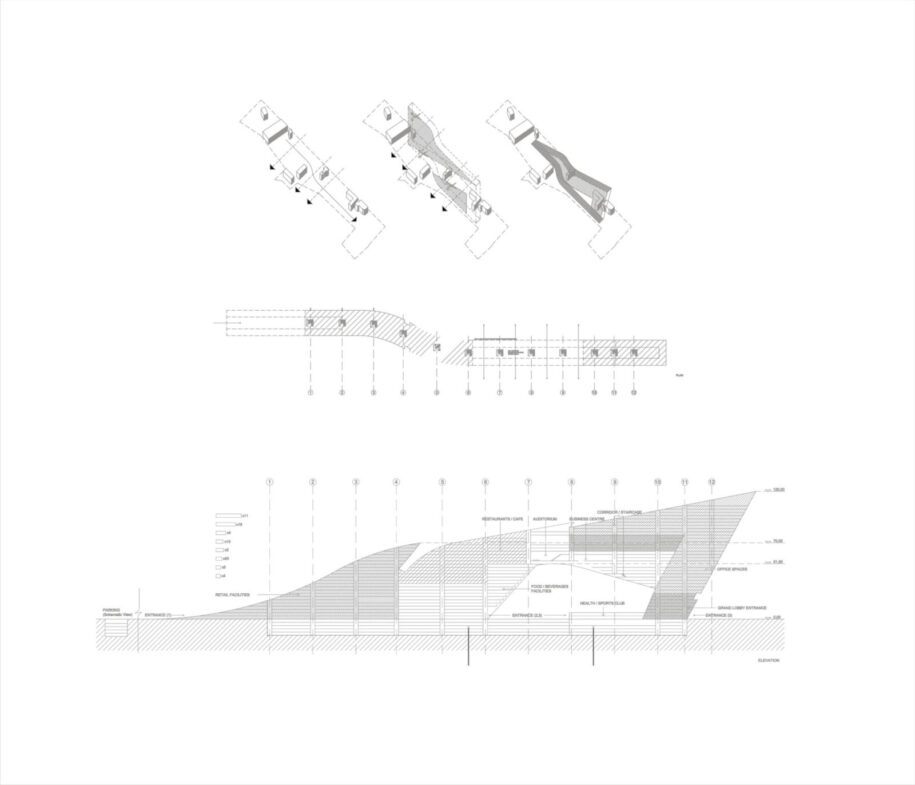 Despite the restrictions, the facades work in a way that they doesn’t reduce the view towards the sea and the Thermaic gulf. 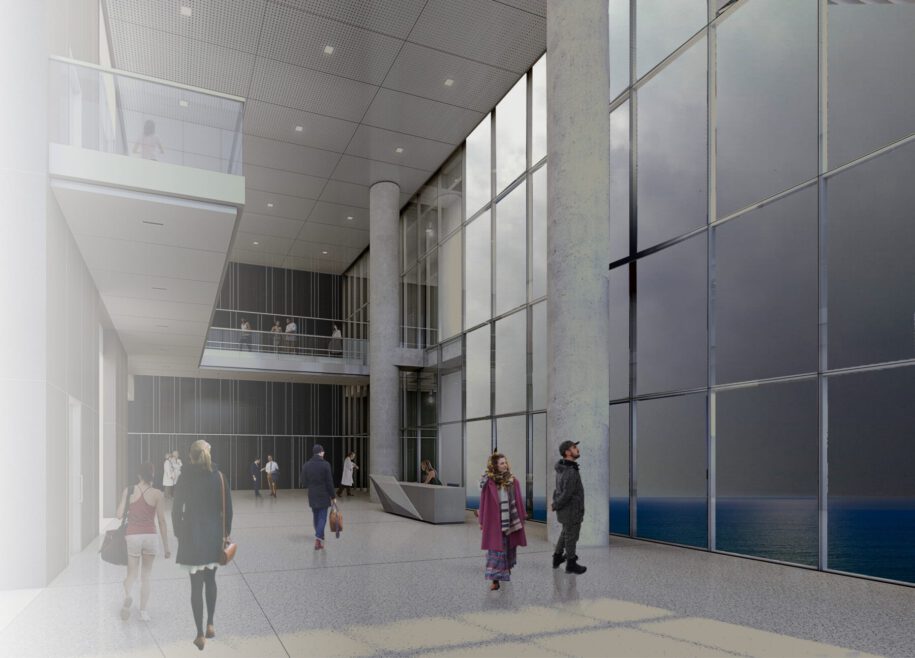