From providing places for family and play to forming a reprieve from urban life to becoming a cultural destination, the new St. John’s Park visionary concept proposal by Ballman Khapalova takes empty space in the heart of New York that has been inaccessible for almost a century and makes it into a unique and vital center for public life in the city. 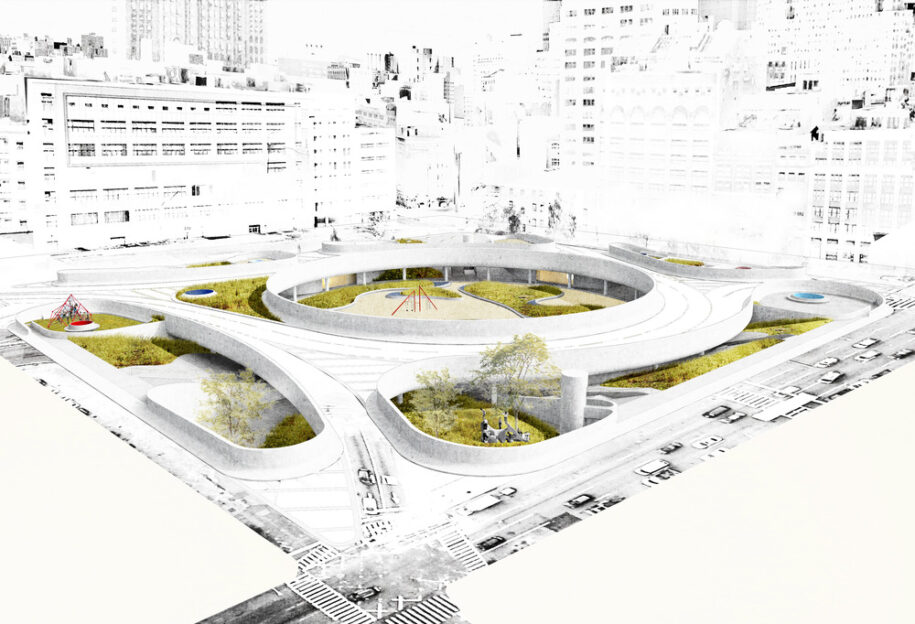 St. John’s Park is the terminus of the Holland Tunnel and entry to Manhattan, passed through by 100,000 people per day. The rotary distributes traffic into five directions using five offramps. Because of this complex traffic pattern, the center of the site remains inaccessible, unbuilt, and unbuildable. St. John’s Park is permanently closed to the public. 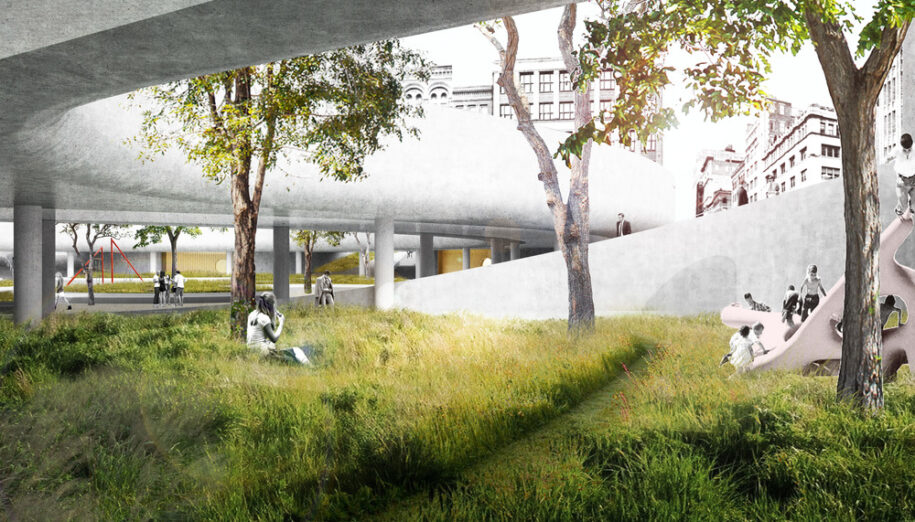 This proposal is generated from the geometry of the existing offramps, so that tunnel traffic may continue unimpeded. A continuous loop travels from street level to one level below ground, excavating the center of the site to create a park and allow pedestrian passage below the existing roadway. 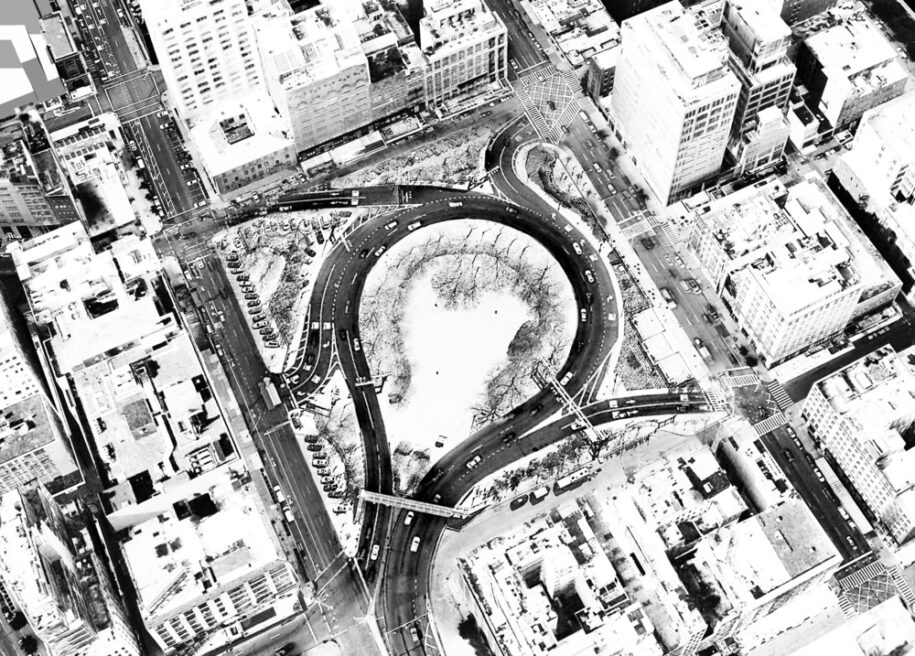 Rather than being an obstacle, the rotary now becomes a center for the neighborhood, linking Hudson Square, SoHo, and TriBeCa. 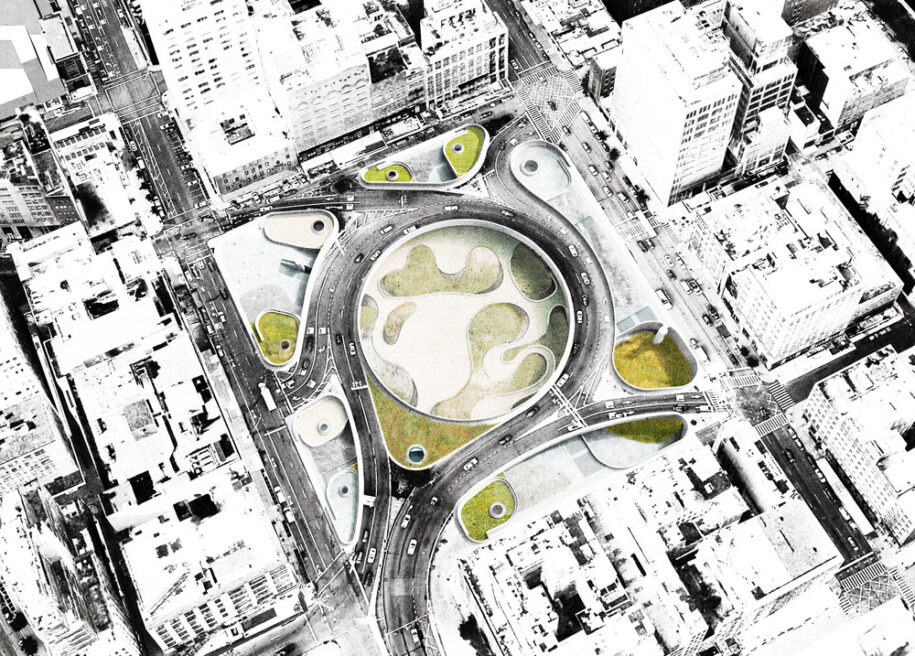 The loop structure defines and interconnects all of the elements and activities of the new St. John’s Park, from the roadways to interior and exterior program spaces. At street level, the loop creates a series of small parks protected from traffic: intimate piazzas, wild gardens, dog parks, and playgrounds. For cars, the walls that protect the parks frame the moment of entry into the city, reminiscent of Richard Serra’s Arc sculpture installed on the site from 1983-1987. Staircases, ramps, and elevators from the street leading down to the central Lower Park and the interior program spaces that surround it. 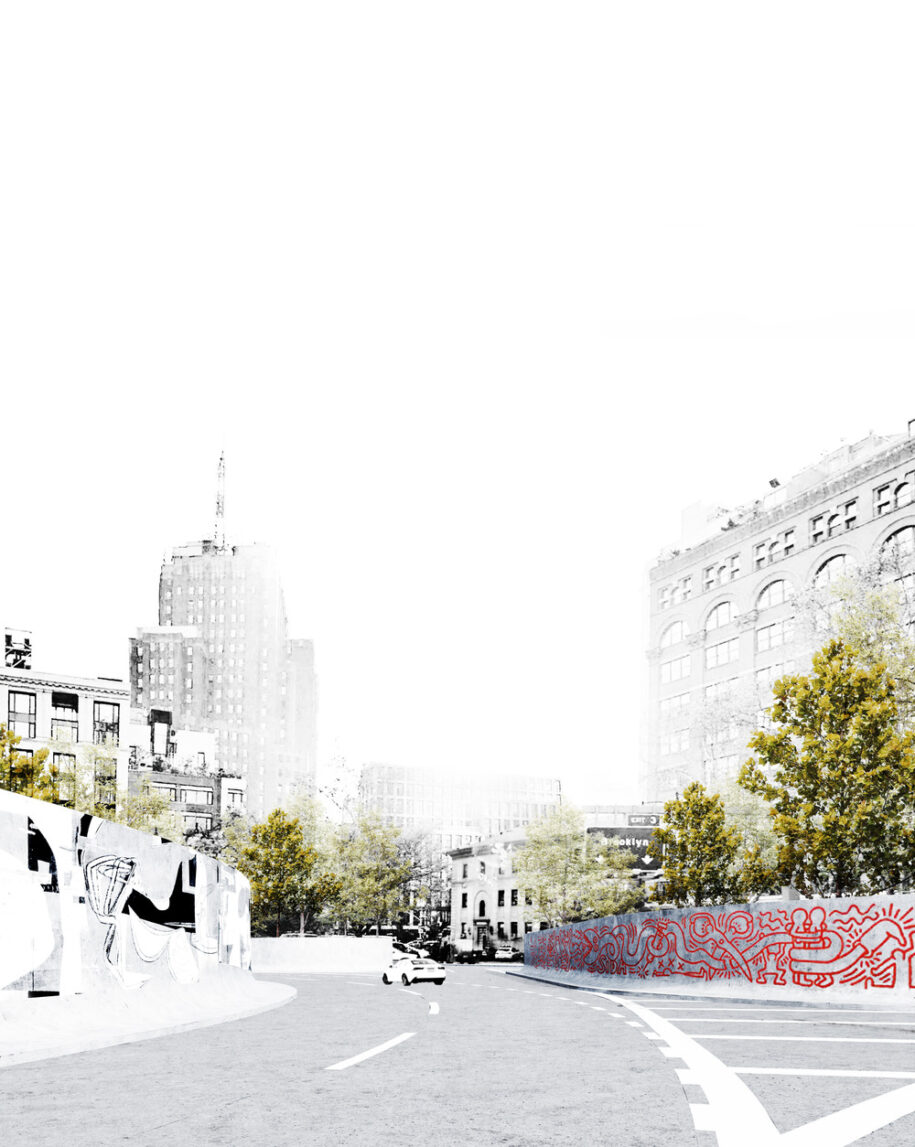 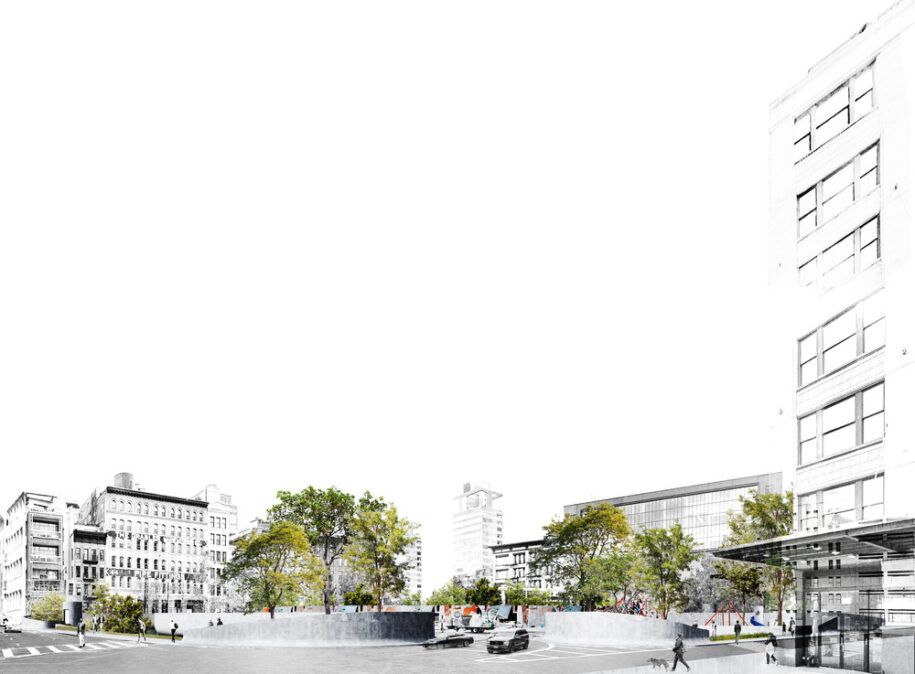 Serving as a neighborhood square, the Lower Park is both a destination and a point of connection. 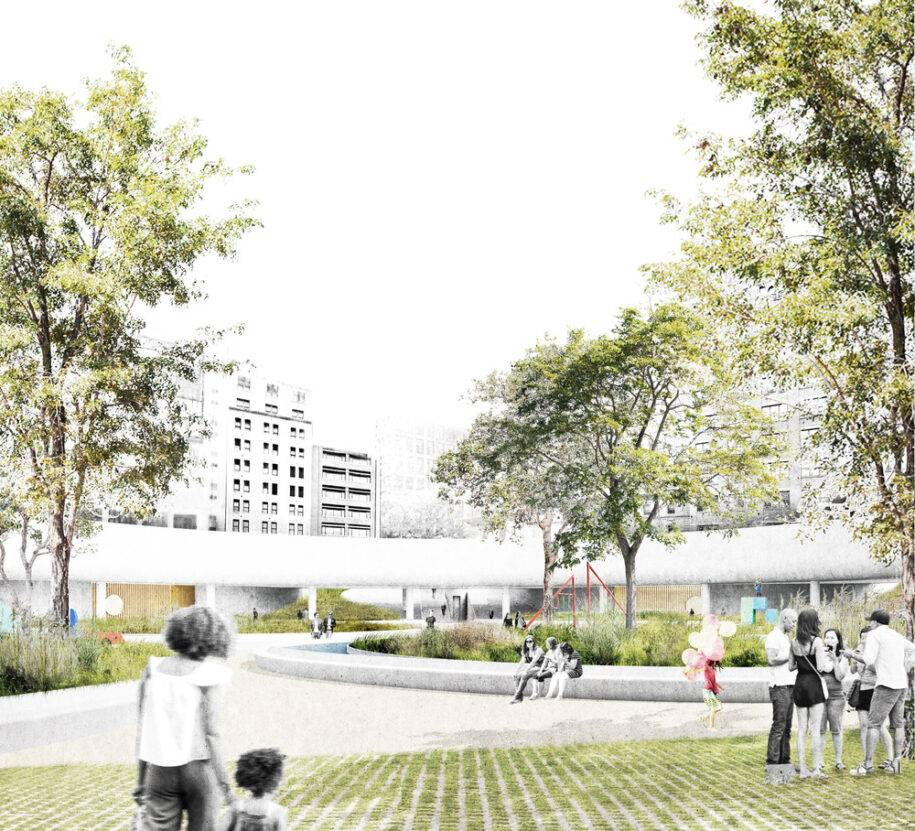 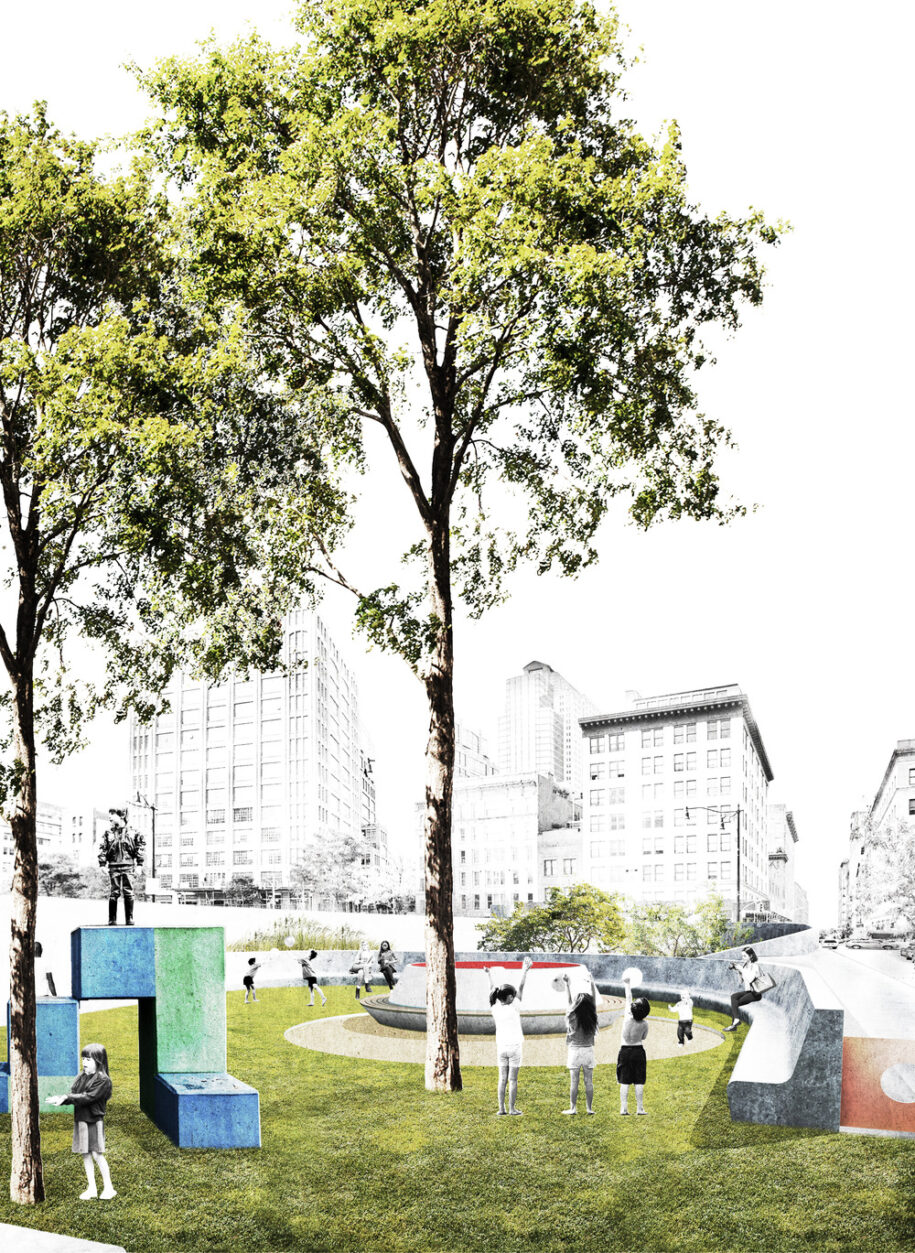 It is 275 feet in diameter and open to the sky, planted with native vegetation. During downpours it acts as a bioswale, retaining water and integrating runoff through various water features in the site. The park can accommodate many functions: it can be a piazza for gathering, relaxation, and people-watching; playgrounds and playfields; an ice-skating rink in the winter; a downtown farmer’s market and an outdoor venue for film and performance. 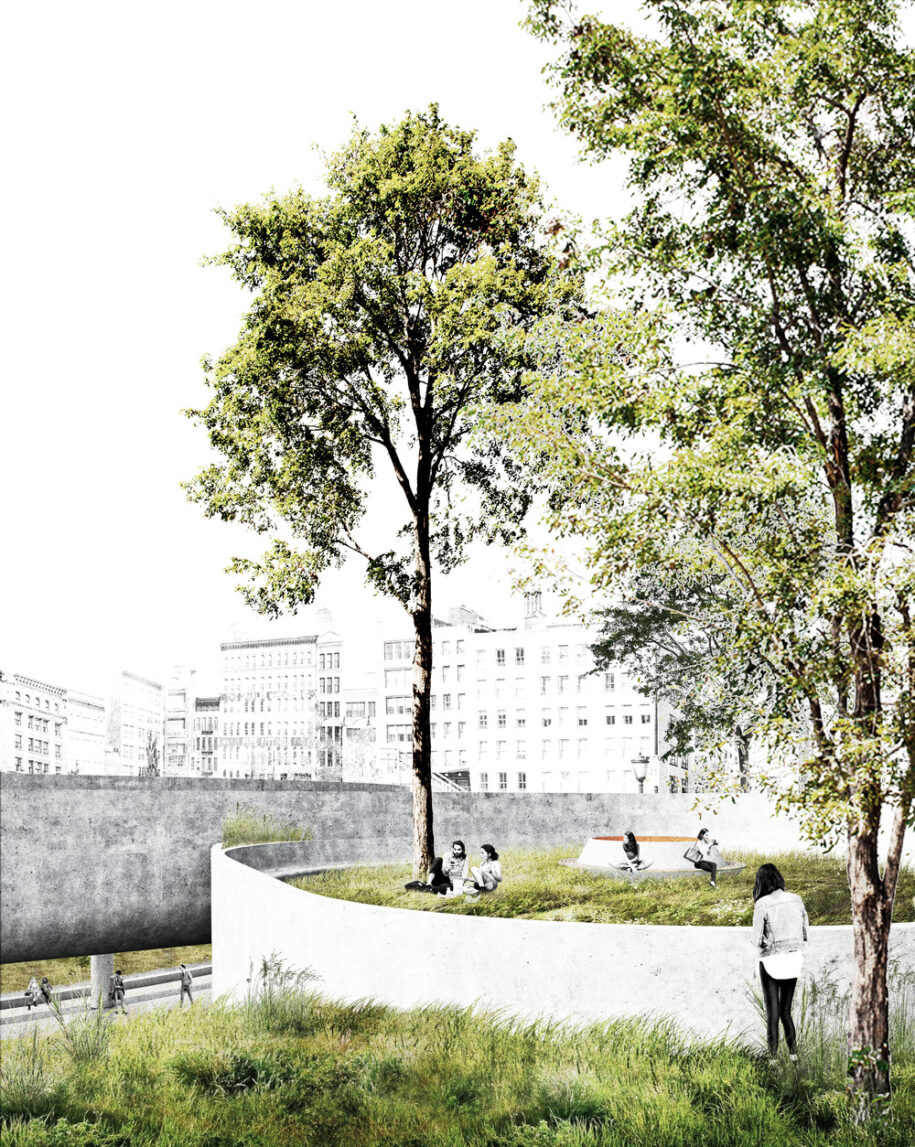 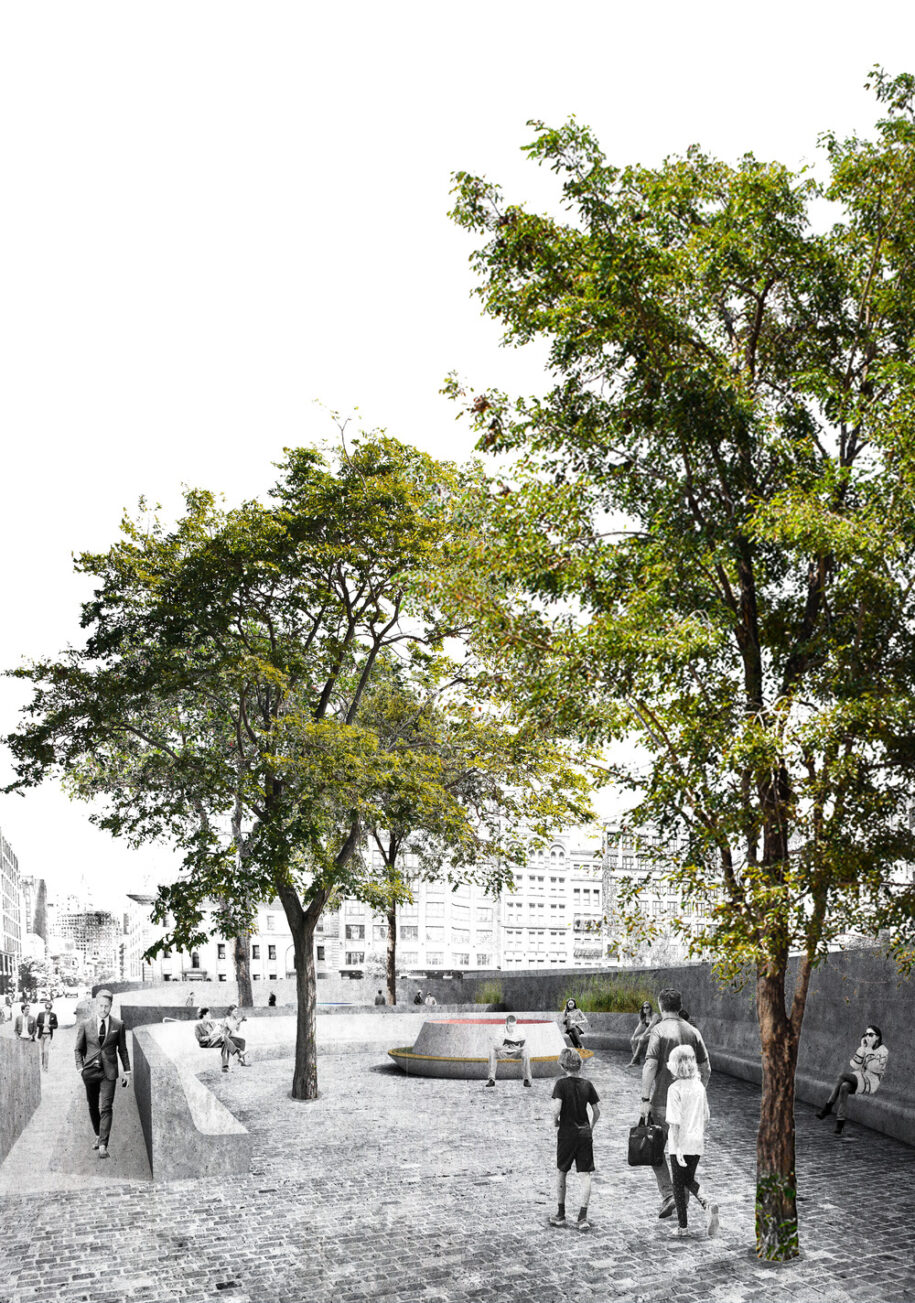 Lit with skylights from the street level parks above, the interior spaces lining the perimeter of the Lower Park can accommodate a series of programs: movie theaters and auditoriums, restaurants and cafes, yoga studios, and bathhouses, education and children’s programs. Acting as a threshold between the Lower Park and the interior spaces, the columns that support the roadway above create an arcade that provides shelter from the rain, snow, or summer sun. Besides circulation, it can be used for outdoor restaurant and café seating, farmer’s markets during inclement weather, and covered outdoor playgrounds for children. 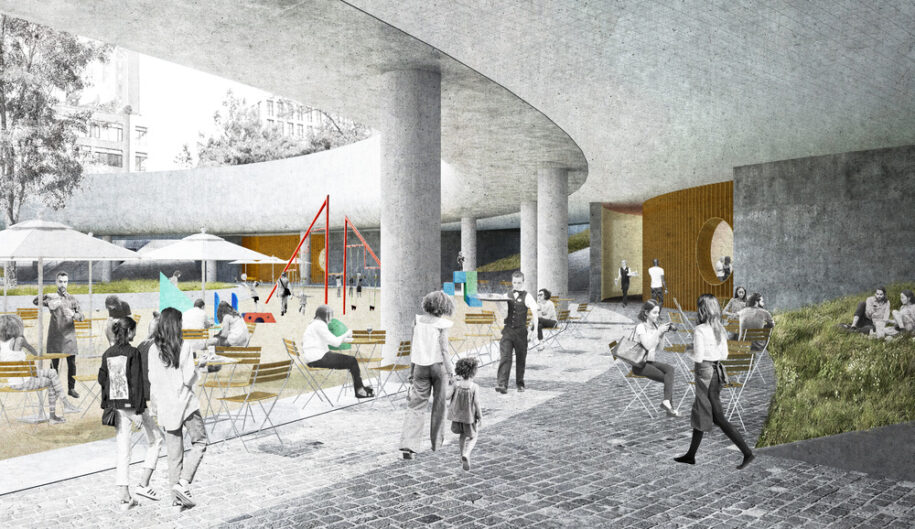 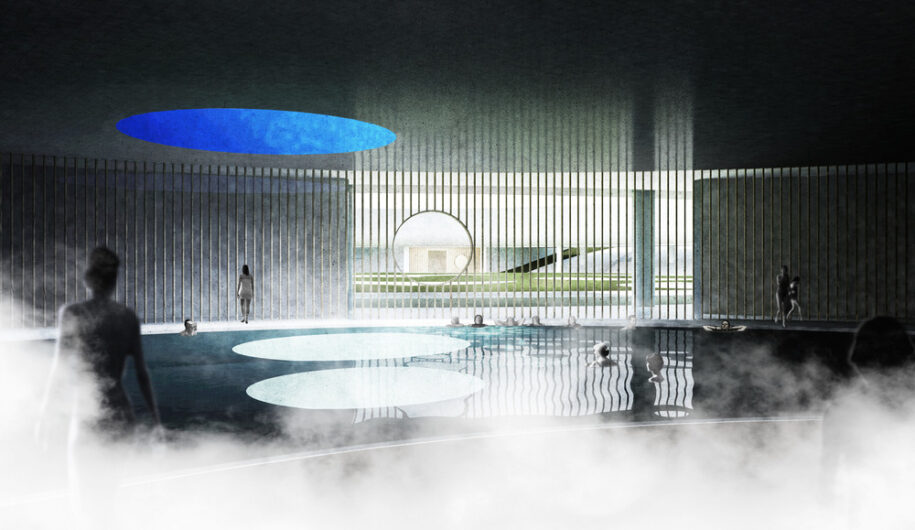 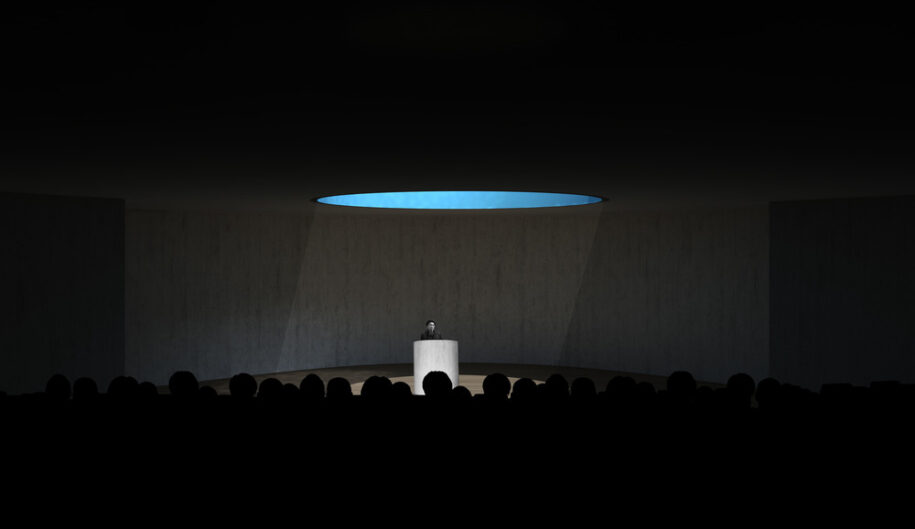 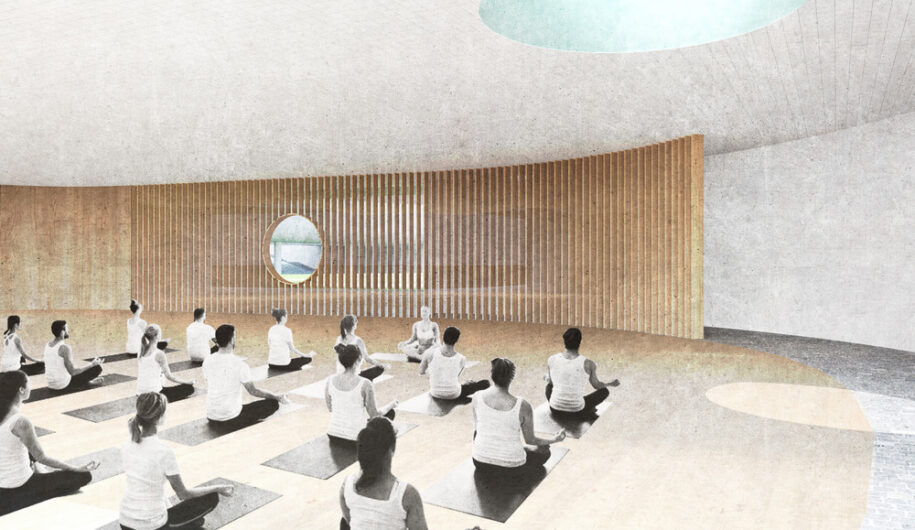 New York based Ballman Khapalova are architects who strive to merge the intimate and the urban through imaginative structures, forms, events, and activities that transform the way a city can see itself. Their urban work in neglected and desolate areas develops opportunities to introduce new spaces of play, art, performance, recreation, reflection, healing, and debate that can allow residents and visitors alike a chance to experience and envision a street, neighborhood, riverbank, or city in a new way. Drawing on extensive experience in design and construction, they select and manage a highly capable team of contributors from the early stages of the design process, ensuring an integrated and feasible design that is physically, environmentally, and logistically achievable without compromising its visionary promise. 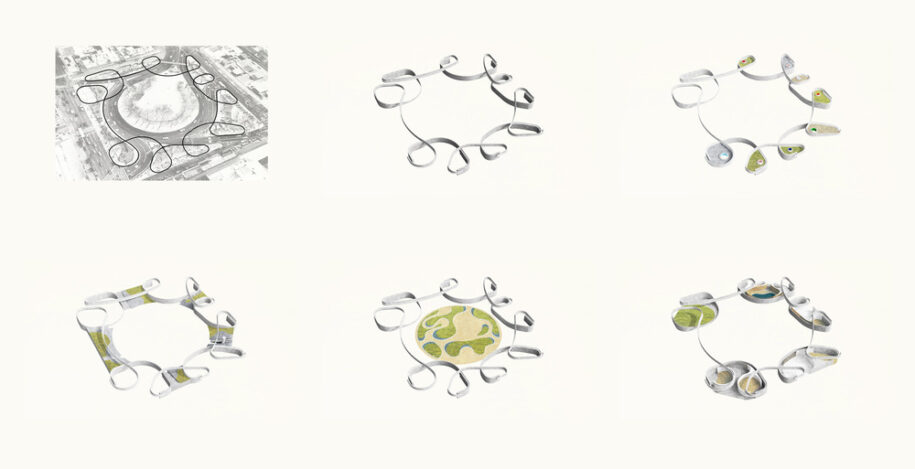 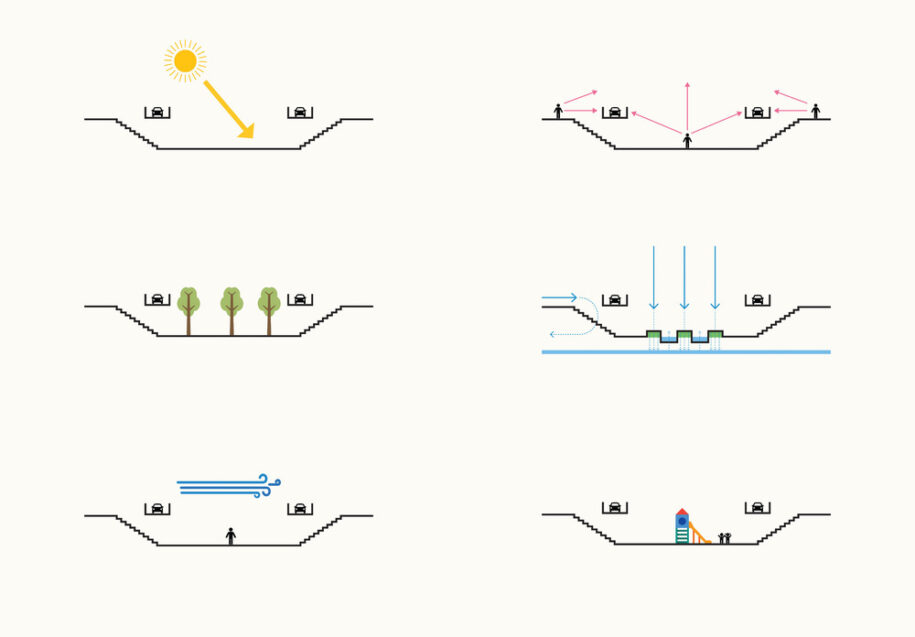 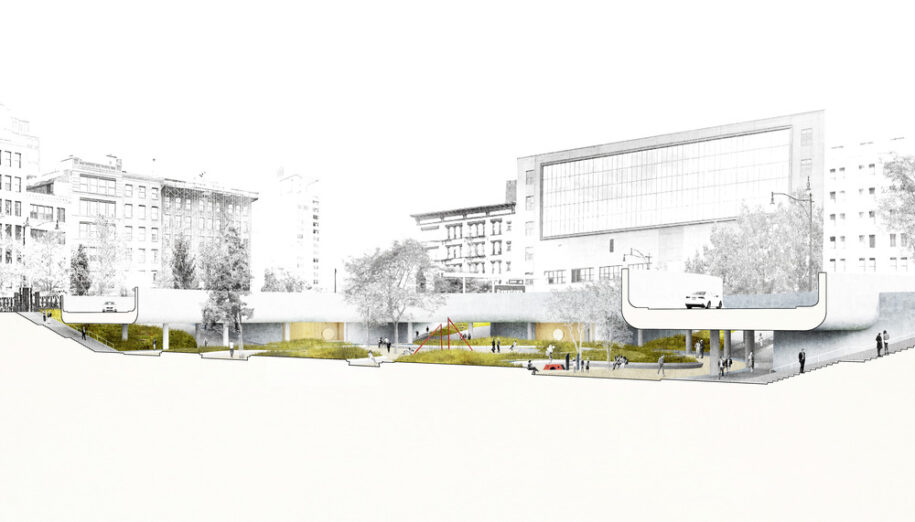 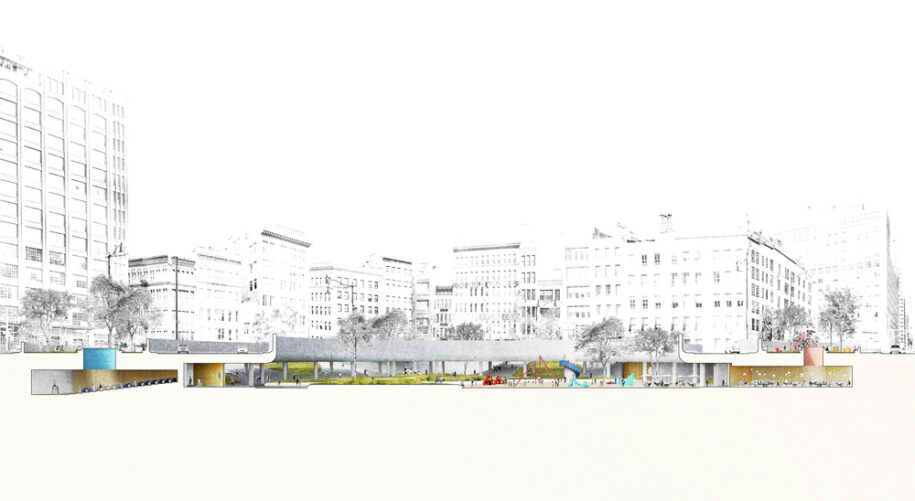 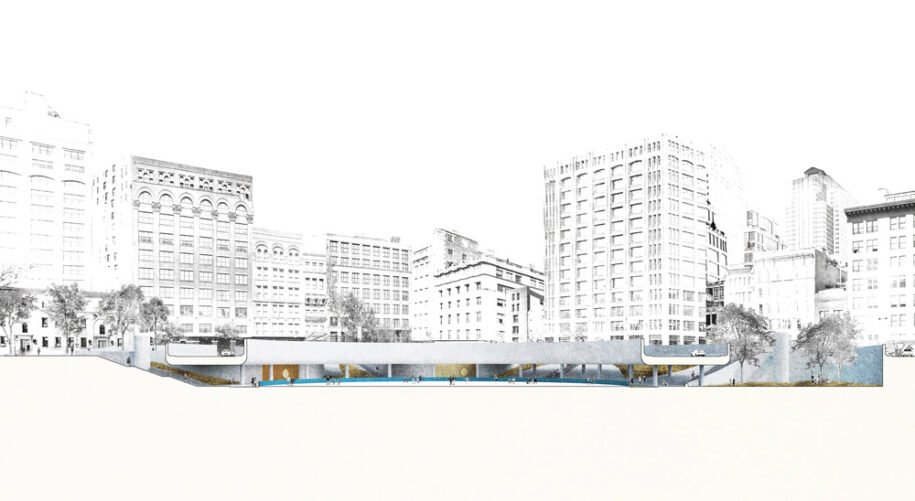