The Isamu Noguchi Foundation and Garden Museum presents a collaborative exhibition with Eleni Petaloti and Leonidas Trampoukis of the Greece- and New York-based studio Objects of Common Interest. Works by Petaloti and Trampoukis, who take an intuitive approach to object and space making inspired by “moments of unfamiliar simplicity,” are interspersed within The Noguchi Museum’s garden and first floor permanent installation.

Eleni Petaloti and Leonidas Trampoukis, co-founders and principals of Objects of Common Interest and LOT Office for Architecture, share with Isamu Noguchi (1904–1988) a focus on form as an abstract empirical tool of social function. Attempting to explain his perspective on what it meant to design as an artist, Noguchi said in 1949 with a certainty he would later largely relinquish:

I am not a designer. The word design implies catering to the quixotic fashion of the time. All my work, tables as well as sculptures, are conceived as fundamental problems of form that would best express human and aesthetic activity involved with these objects. I have done some work for mass production technique. Here the problem was approached entirely freely and without compromises so far as I was concerned. Art is an act. The act of creating a fundamental form, though it may be disciplined by the fundamental nature of the object desired, is not designing in the accepted sense.
Isamu Noguchi, “From an Interview with Isamu Noguchi,” The League Quarterly, 20, No. 3 (Spring 1949): 8.

This is quite a repudiation of art for art’s sake and pure abstraction. Noguchi’s purpose in invoking the relationship between art and design here was neither to elevate or forswear design. He really recognized no fixed hierarchical relationship between the disciplines and was generally uninterested in the labels. What he did want to make clear was that in his view all sculpture should be functional. Function is what he means by “fundamental problems.” Of course from his point of view, a play mountain the size of a city block constituted a functional object. 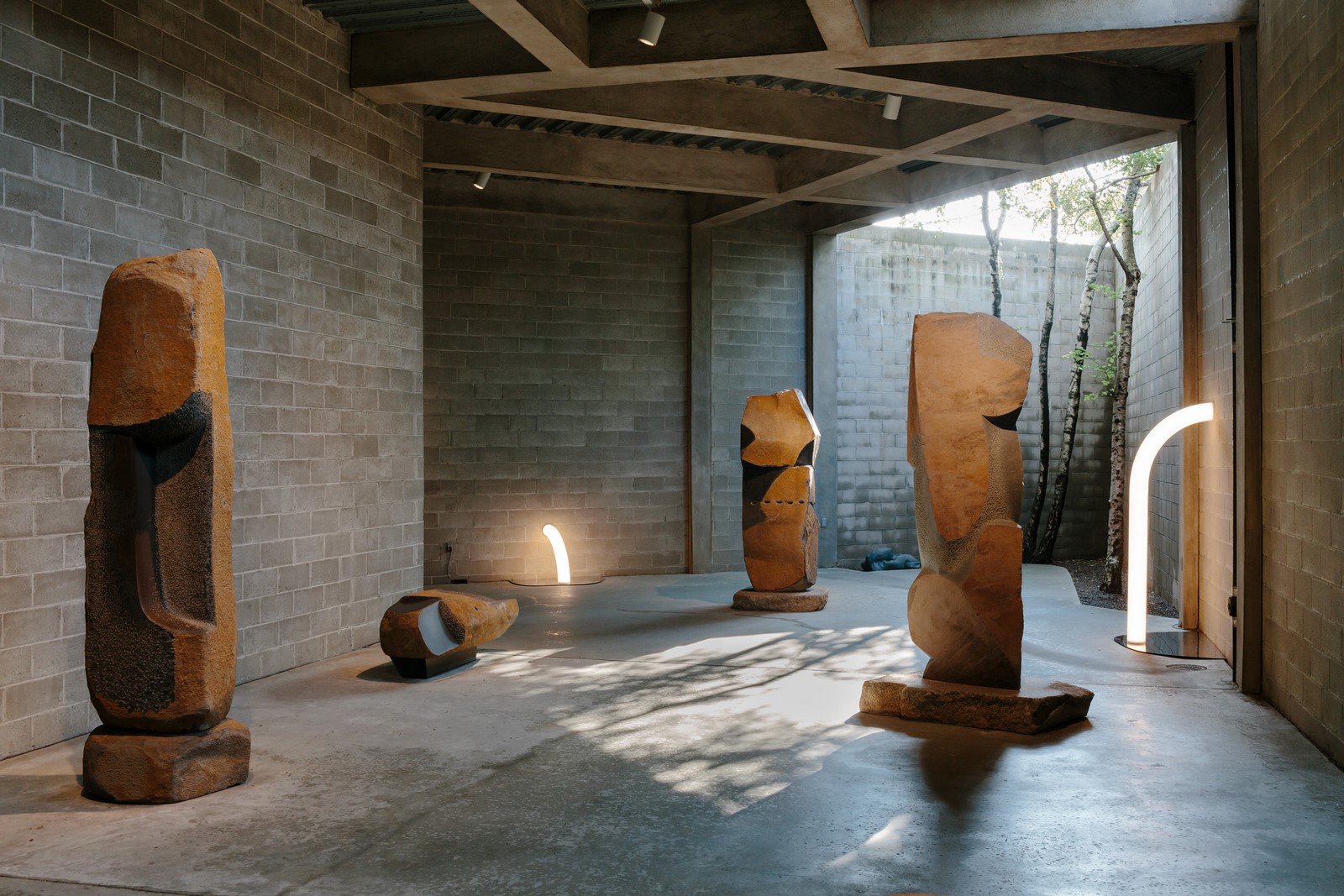 Noguchi had a knack for identifying, isolating, using, and producing what we might call stem cells of sculpture—units so basic they are capable of being anything, have no age, don’t wear out, and seem able to regenerate the matter around them. And like stem cells, the ability to do those things is their job. They are universal answers to fundamental biological problems. Noguchi associated his commitment to the basic building blocks of sculpture with his emulation of nature. And to the realization that, “The problem always [is] scale: equivalent scale to large buildings and spaces are not necessarily met by bigness but rather by relative scale and simplicity of elements.”1

When working on pretty much any kind of project, whether a table, a dance set, a public space, or a sculpture to show on a base in a gallery, he could start in the primordial ooze, develop an idea right up to a state of archaic universality, and then stop. His late large basalts—modeled on the standing stones erected by our ancient ancestors all over the planet, and worked just enough to be of ambiguous provenance—are that. He could also start with something as densely overloaded as the matrix of modern civilization and find the stem cells within. That’s what he did, for example, with his cut and folded galvanized steel plate pieces, which seem to have derived from the bric-a-brac of the urban landscape, and then to have shed their contemporary commotions.

Even as the hierarchical boundaries separating design fields have become more porous and less visible, the status gaps between certain types of object making and space making and others have remained surprisingly rigid. Meanwhile, the pool of art and design field practitioners working hands-on, at a fundamental level, across a broad range of disciplines, has remained quite small.

What is so interesting about the things Objects of Common Interest makes is that despite often having no explicit, or essential, purpose, and even though their works are clearly in search of something more than function and attention, they never wander far from an unidentifiable usefulness. It’s in those in-between states and zones, free from any particular requirement, that Noguchi’s thinking thrived.

Everybody’s afraid to bring things out into the open. We live in boxy rooms, back our couches and chairs against the wall—we’re afraid to stand free. But I design my furniture for modern, open homes. I like it to stand by itself, to look right from all angles.
Isamu Noguchi, quoted in Ann Pringle, “A Sculptor Plans a Home,” New York Herald Tribune (Feb 15, 1949): p. 14.

Noguchi in Greece, Greece Within Noguchi

Objects of Common Interest and The Noguchi Museum have launched a digital feature that explores Isamu Noguchi’s relationship with Greece, a place that he once described as his “intellectual home.” Presented as a visual collage, the feature highlights Objects of Common Interest’s ongoing research into Isamu Noguchi’s relationship with the culture, materiality, and atmosphere of Greece, and reflects upon their own practice in relation to Noguchi’s ways of thinking.

Objects of Common Interest is also working on a set of books that expand upon the themes and content of Noguchi in Greece, Greece Within Noguchi. This will include an expanded set of photographs from their Tracing Noguchi project, in which a group of photographers were invited to interpret Objects of Common Interest’s works in relation to Henry Miller’s The Colossus of Maroussi (New Directions, 1949), which Noguchi carried with him on his initial travels through Greece in the 1950s.

by ANGELIKI ASIMAKOPOULOUArchisearchhttps://www.archisearch.gr/wp-content/uploads/Dimensions-1920-680-1920x680-1-370x567.jpg
SHARE THIS PAGE
WITH YOUR FRIENDS