Among several types of birds biotope and species and as walking through the wooden path, the visitor can instantly have a visual connection with the new Abu Dhabi bird observatory. The building is formed on a cubic translucent shape and has been repositioned to a strategical place between the three lakes. 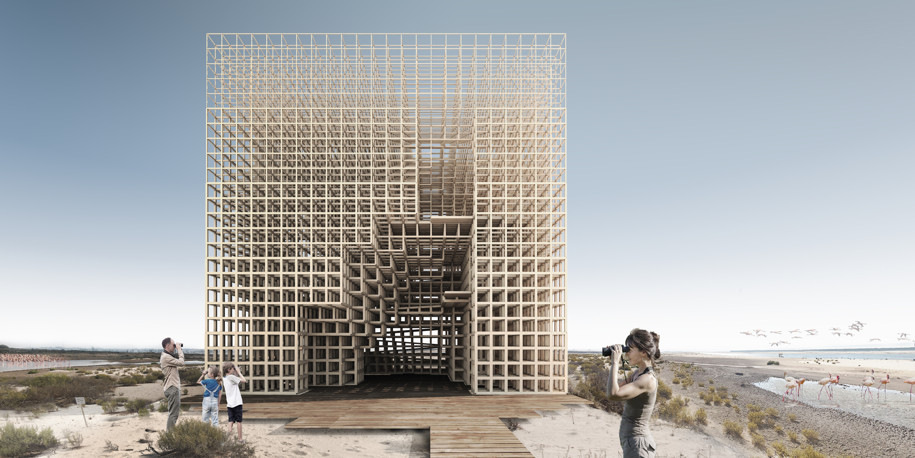 The design approach treats the building as a living organism and goes through all the different life cycle stages; genesis (use of first materials and construction, life (use of the building) and death (end of the building). 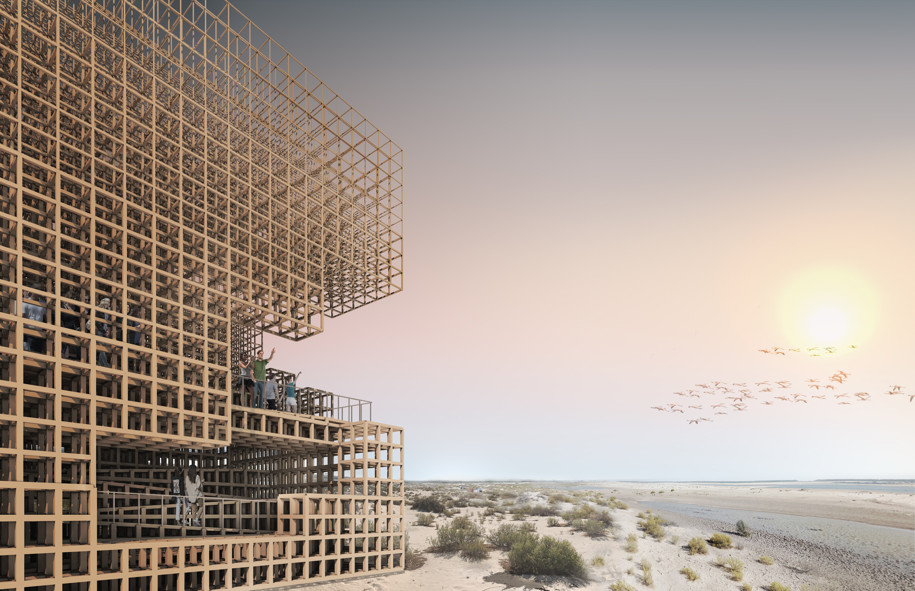 In all these different phases, our goal was to minimize the impact towards the natural environment and create a sus­tainable, accessible and iconic building that integrates perfectly to the environment and nation’s culture. 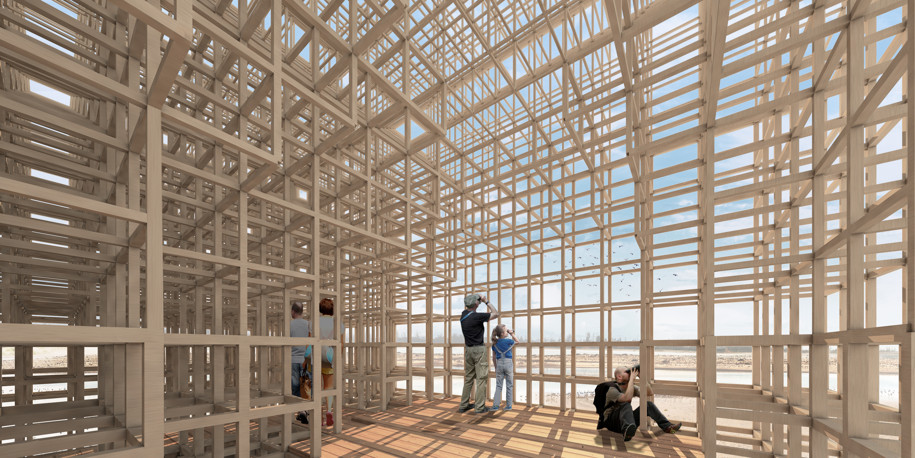 The building consists of a timber parametric modular structure that can be created in a different location and assembled directly on the site, limiting thus the CO2 emissions and avoiding noise pollution. Due to its modularity, re- usability, and the materials used, it can be considered as a completely circular building.

Walking closer towards the building the visitor distinguishes a deep recess on the façade, which forms and in­dicates the main entrance. The entrance area at the ground floor with its gradually dropping ceiling reveals an organic vaulted space which contrasts with the rigid exterior volume of the cube. The interior space gives the impression of a pixelated cave and resemble to the repetitive geometrical ornaments found in Islamic ar­chitecture, known as Muqarnas. 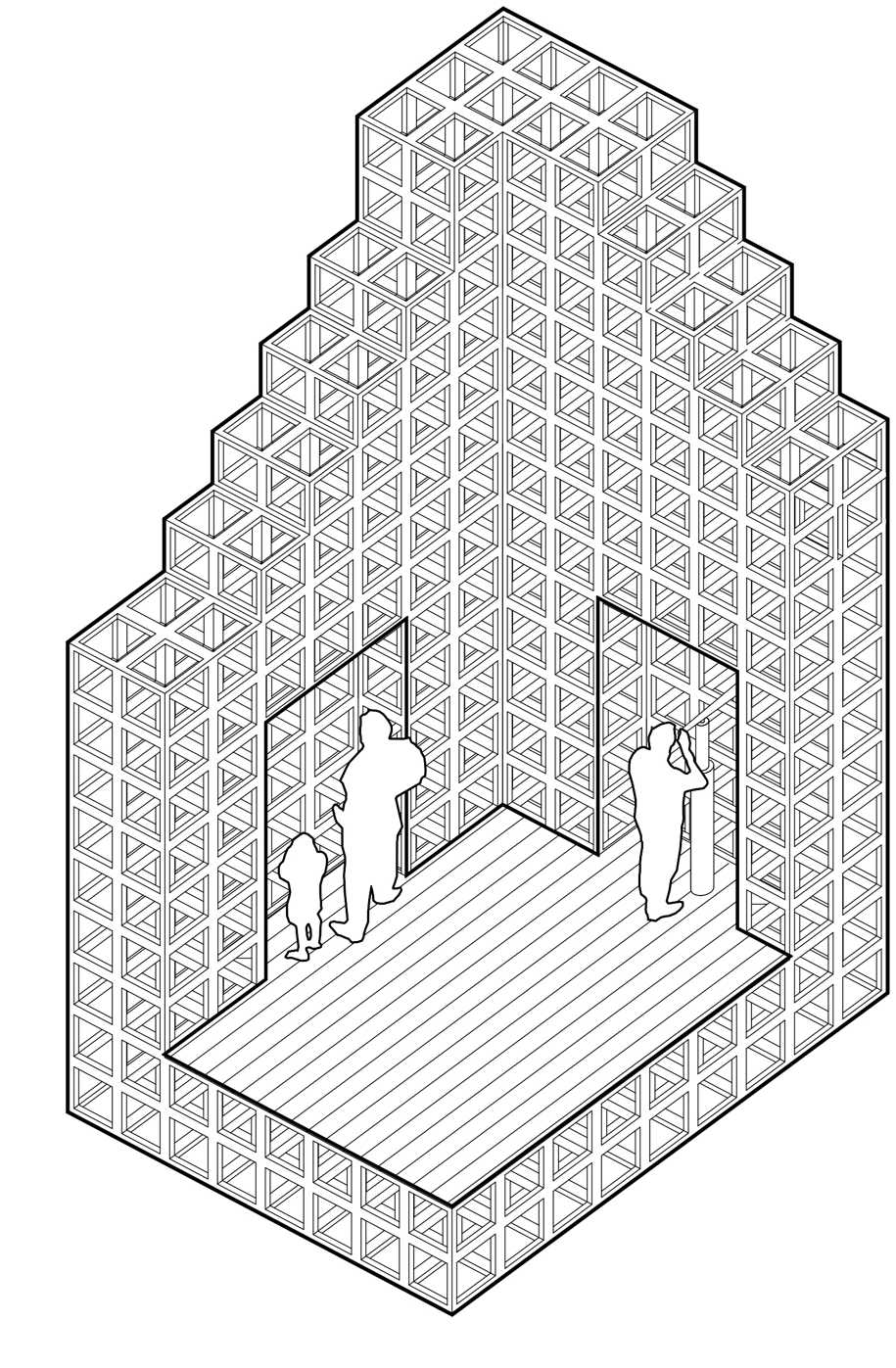 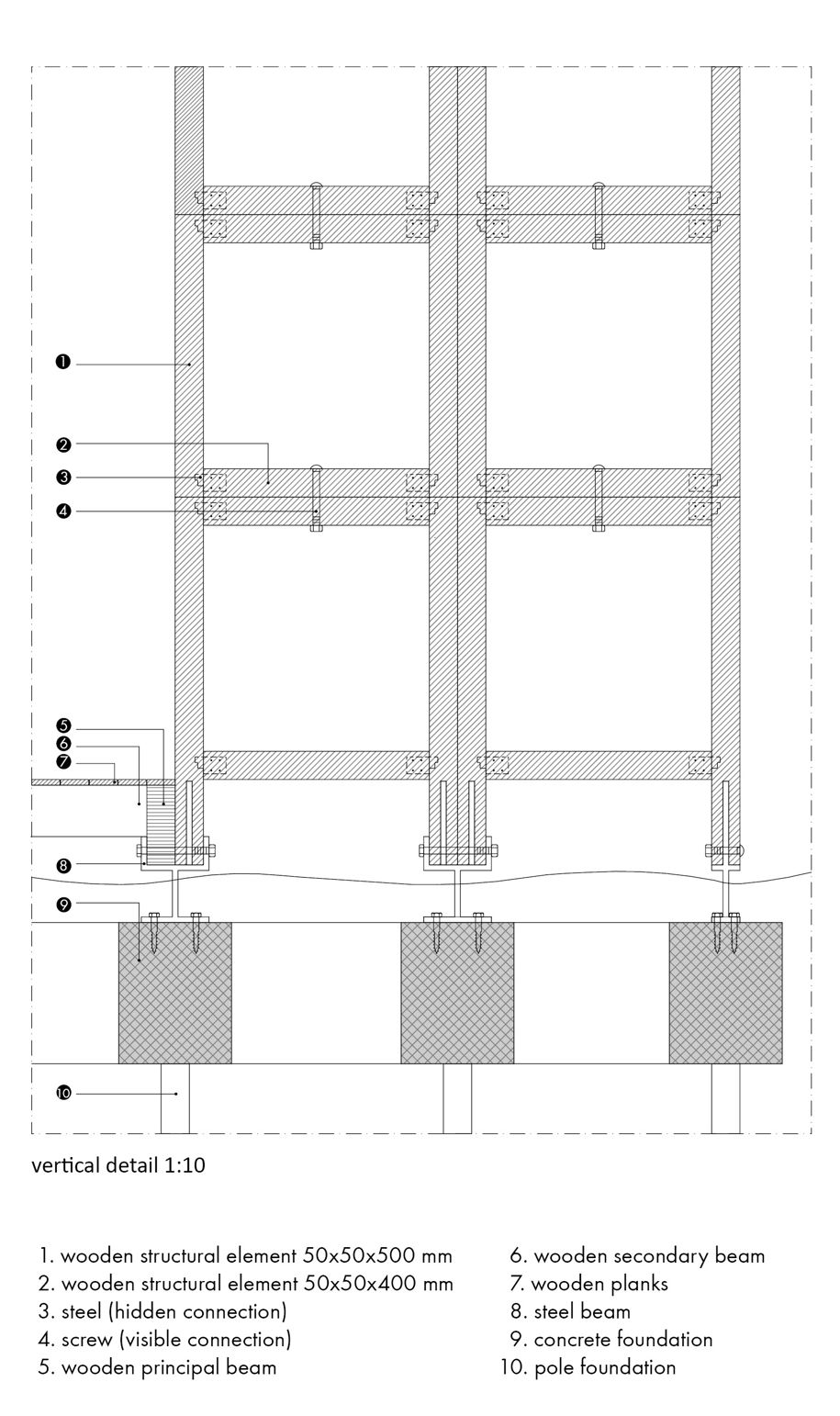 The deconstruction of the cube in the interior exposes the fact that build­ing is a self-similar object, with the cube being not only the buildings geometry but also the structural unit of it.

The design consists of the creation of three viewing platforms that together they offer a 360 degree pan­oramic view of the Al Wathba wetland reserve. The platforms are connected with each other and with the ground floor by comfortable ramps. These spaces are part of an interior route that starts at the ground floor with exhibition space which includes information regarding the flora and fauna of the region and ends at the highest viewing platform (+6m). Functional space inside the building is created by being carved out of the cuboid three-dimensional grid living the rest of the geometry serving as the carrying structure. 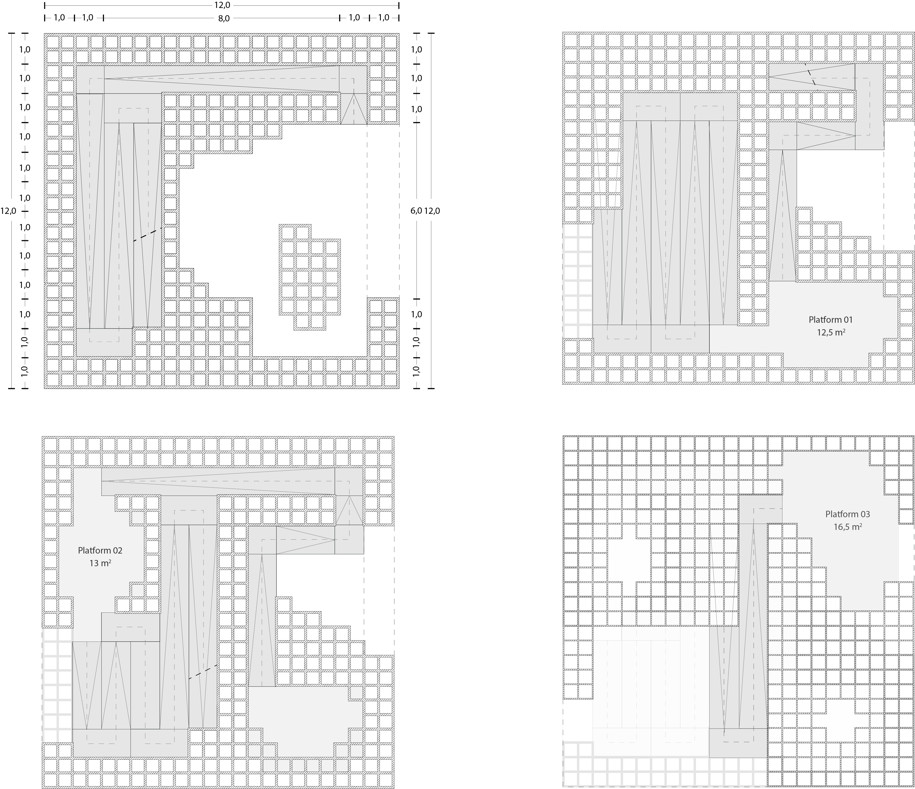 Similar to a bird cage, the building reverses the roles and brings the visitors to the position of the captive and not the captor. 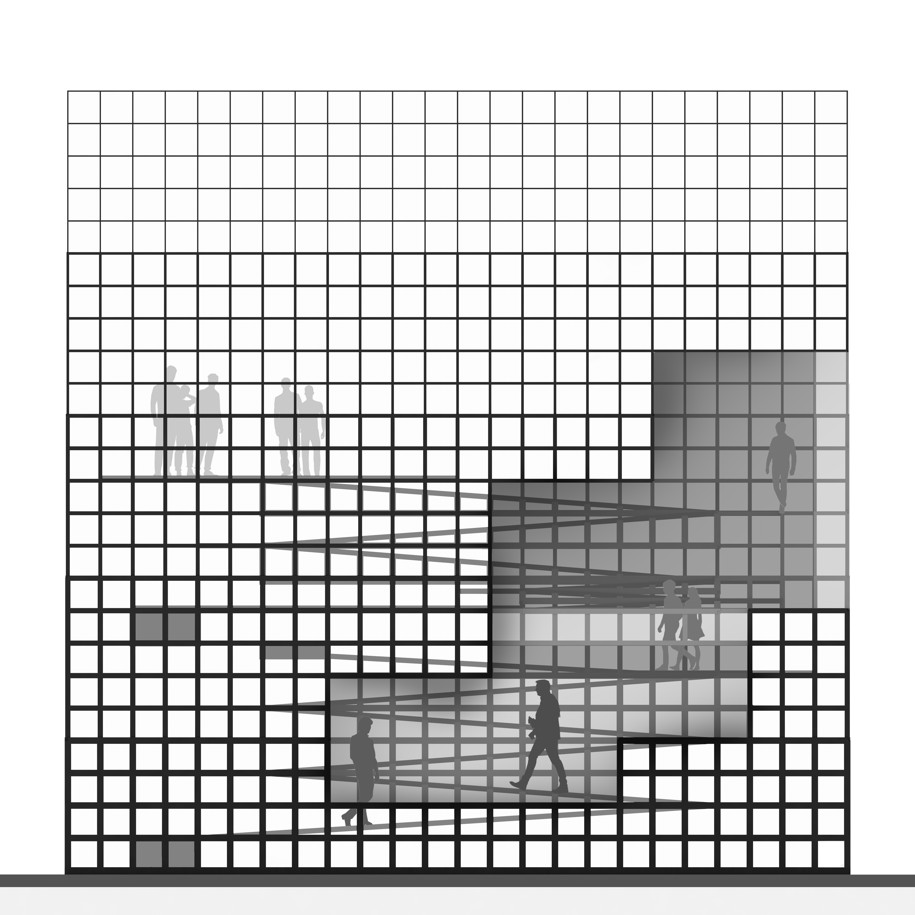 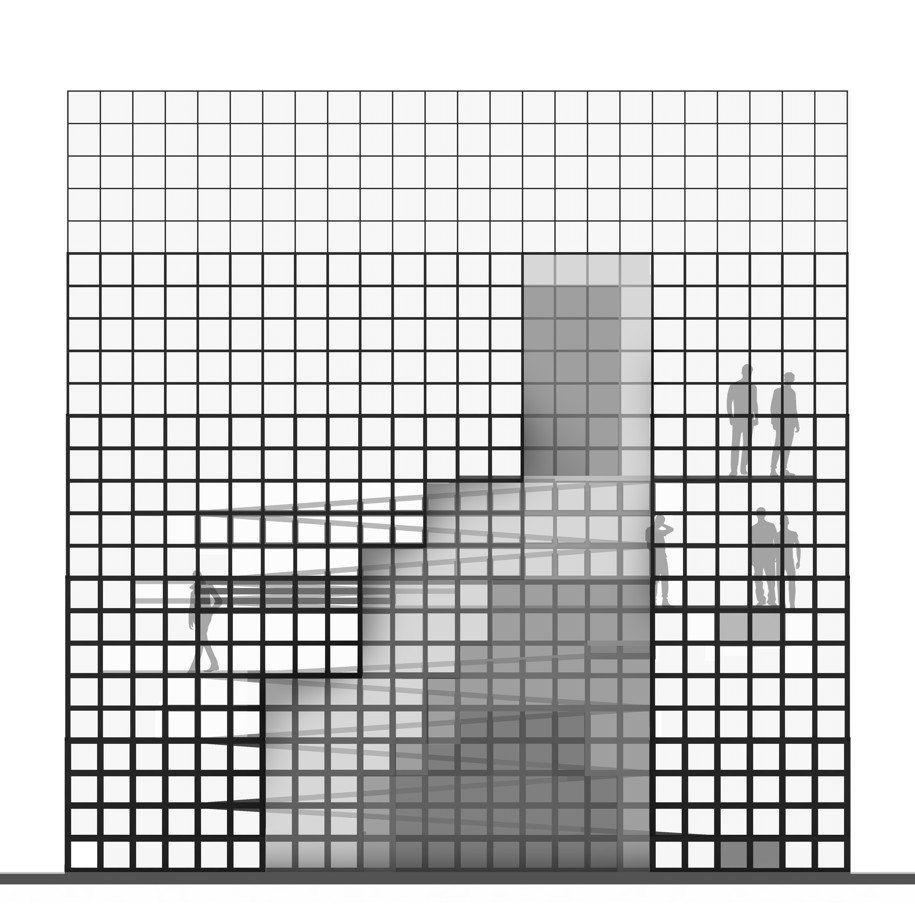 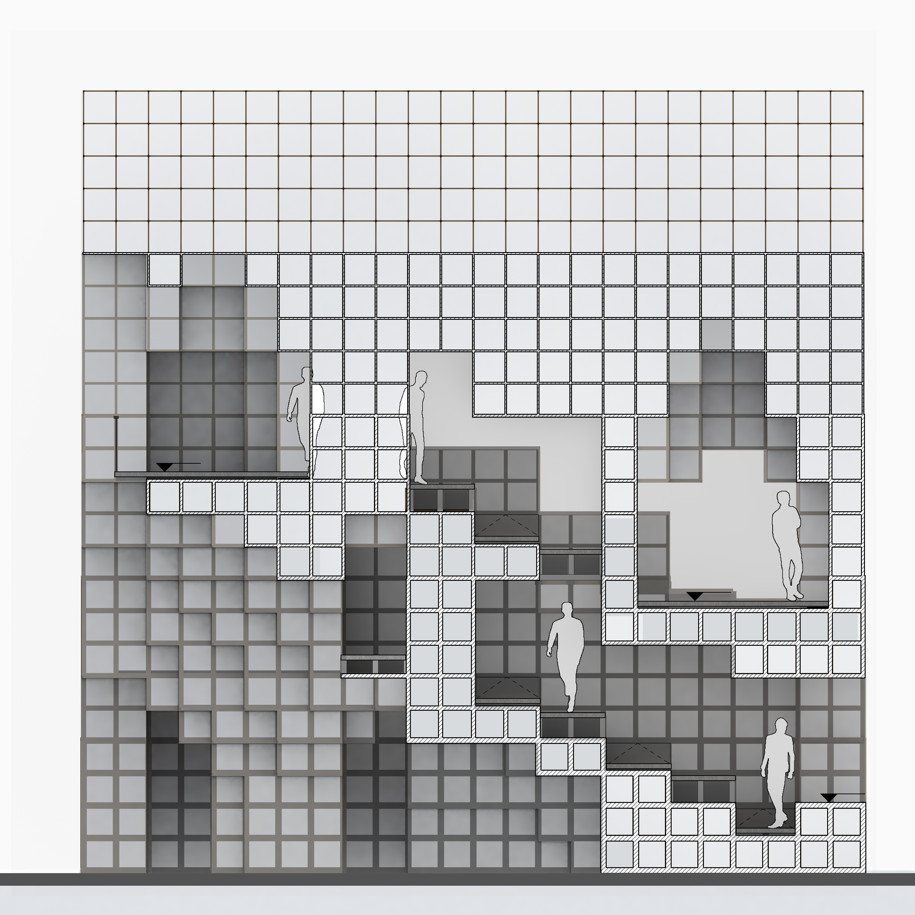 Although the openings are wide enough for undisturbed observation of the birds, the visitors have in most of the spaces the feeling of being kept inside a cage. At the same time, the structural grid of the building re­duces the amount of sun that enters the building offering various shaded areas. Additionally, keeping the visitors behind the grid rather than an uncovered platform minimizes the visual and sound disturbance towards the birds. 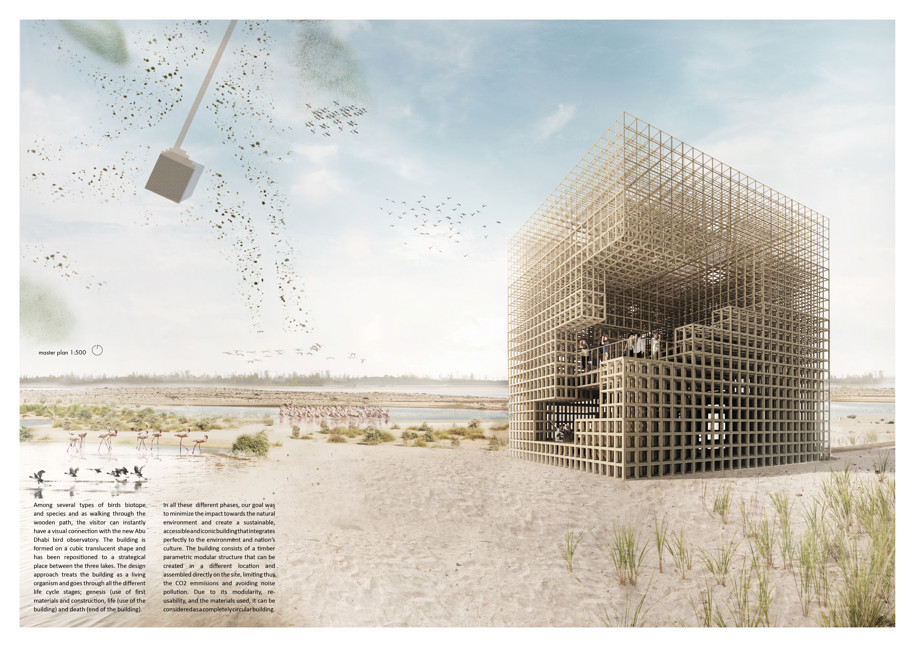 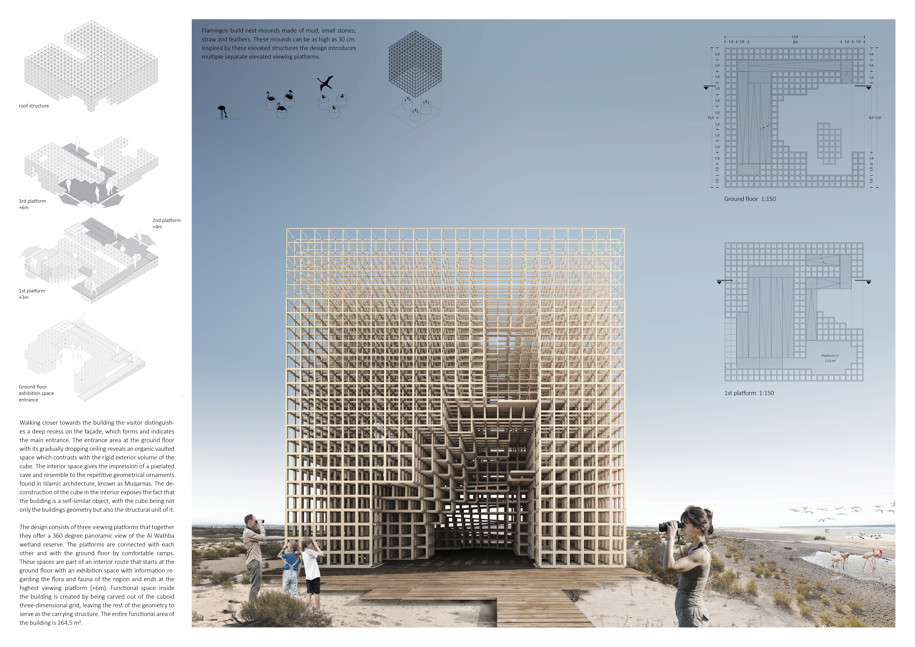 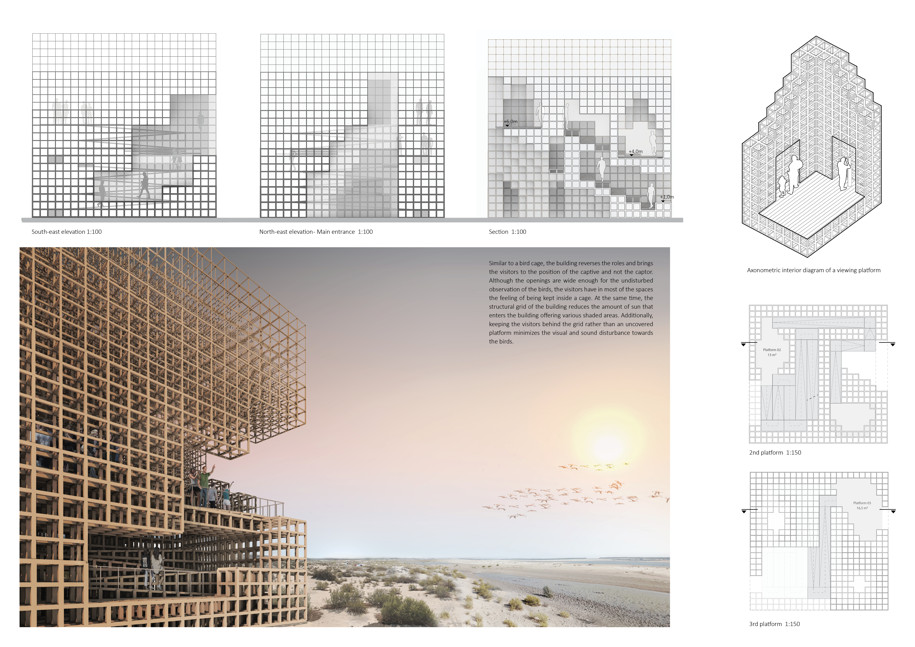 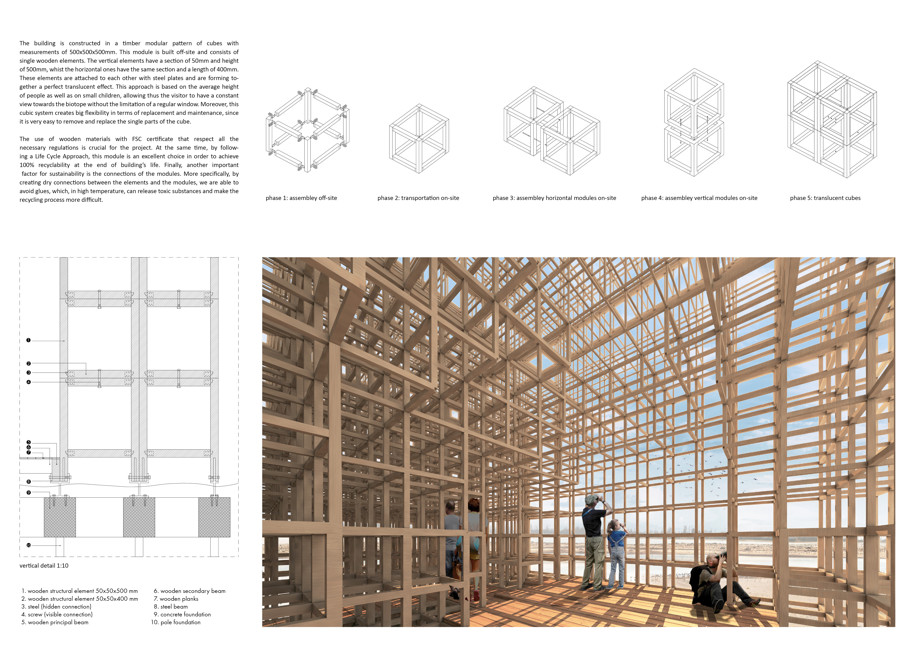 Panagiotis Dimakidis and Rafail Gkaidatzis are two Greek architects from the Netherlands whose main goal is to envision and transform the urban environment in order to shape a better and more sustainable future for the next generations. Combining their slightly different academic backgrounds they have been collaborating actively in The Netherlands and abroad in various types of projects. Their professional experience covers a diverse field of projects that vary in scale and typology, ranging from city-level interventions, infrastructure and urban masterplans to installations and pavilion structures. 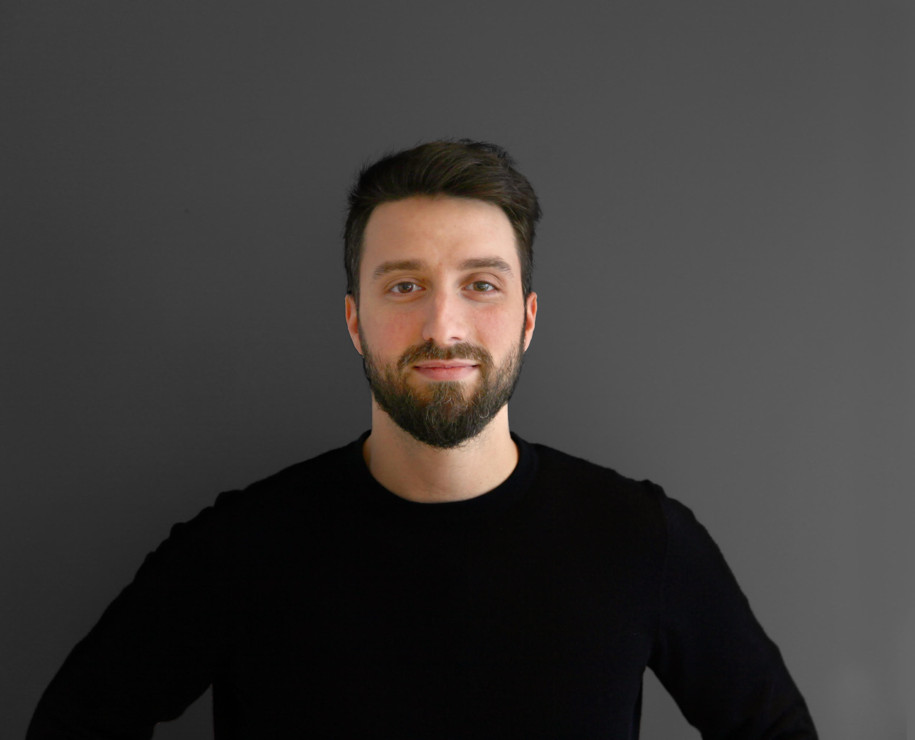 Panagiotis Dimakidis completed his Master’s studies in 2017 at the Polytechnic University of Turin with a specialization in sustainable design. Since then he has been working for renowned Dutch architectural firms such as RAU architects, KAW and ZJA architects. Since 2016, Panagiotis Dimakidis has contributed on projects such as the recently built bird observatory center in The Netherlands, called ‘T IJ (RAU Architects in collaboration with RO&AD architects) and the project Triango, a new type of office area in Paris (RAU Architects in collaboration with SeArch and Karres+Brands). The latter was distinguished in 2018 with the prestigious International Architecture Award in the mixed-use category. 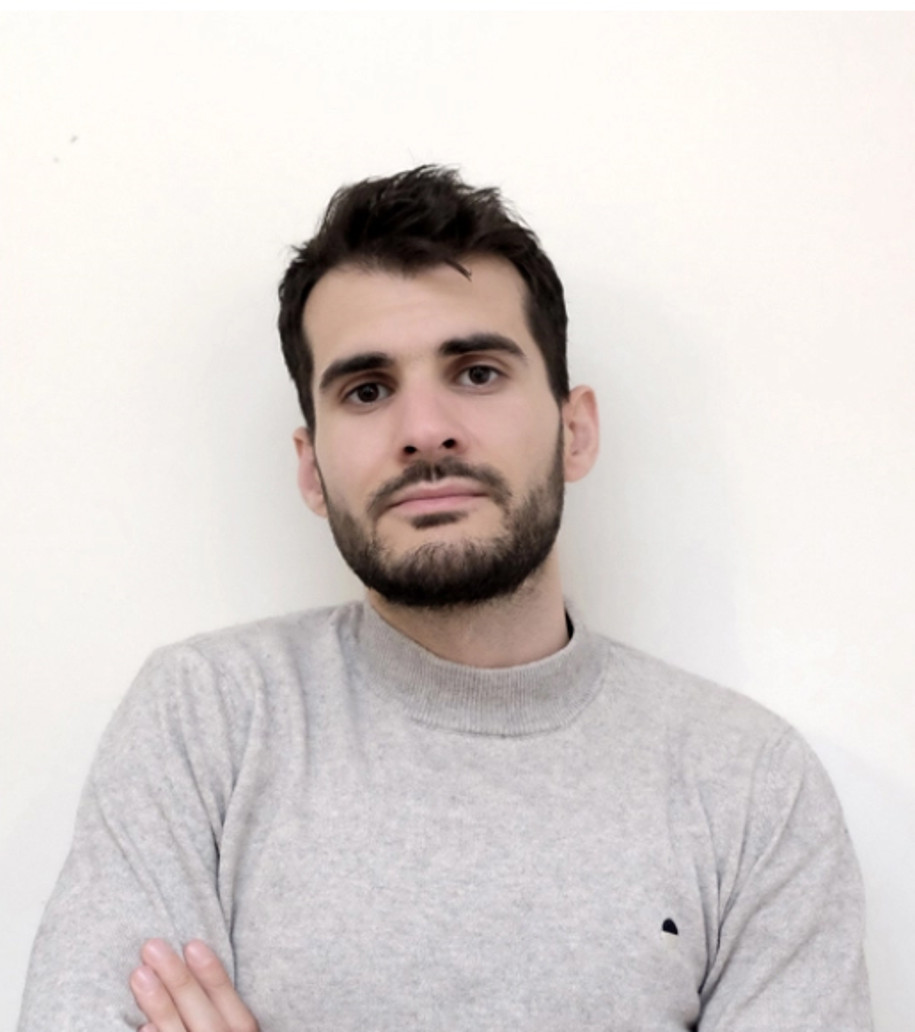 Rafail Gkaidatzis received his Master’s degree in 2014 from Delft University of Technology with a specialization in the design of sustainable structures. From 2015 he has been working for firms such as the international engineering consulting firm Royal Haskoning DHV and ZJA architects while he maintained a position at Delfts University of Technology as a researcher/ lecturer in the field of bridge design and sustainable structural materials. Additionally, in 2014 Rafail Gkaidatzis received the first prize in a competition for the design and construction of a pedestrian-bicycle bridge in the outskirts of Delft in The Netherlands. The bridge was realized and delivered to the public two years later.