“The ‘Serrería’ vs ‘La Cosa’ is a form of coexistence, a dialectical combat mode, which has allowed going beyond the conventional concept of rehabilitation and inhabit the remaining gap between the two opponents. It is a coexistence of opposites which has understood this intermediate region not as a finished product but as an open, versatile and activated process that people activate.” 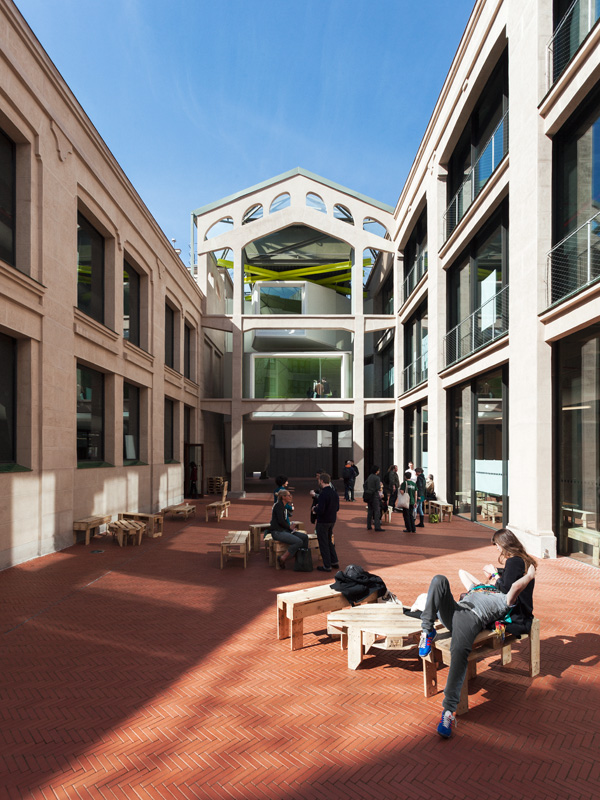 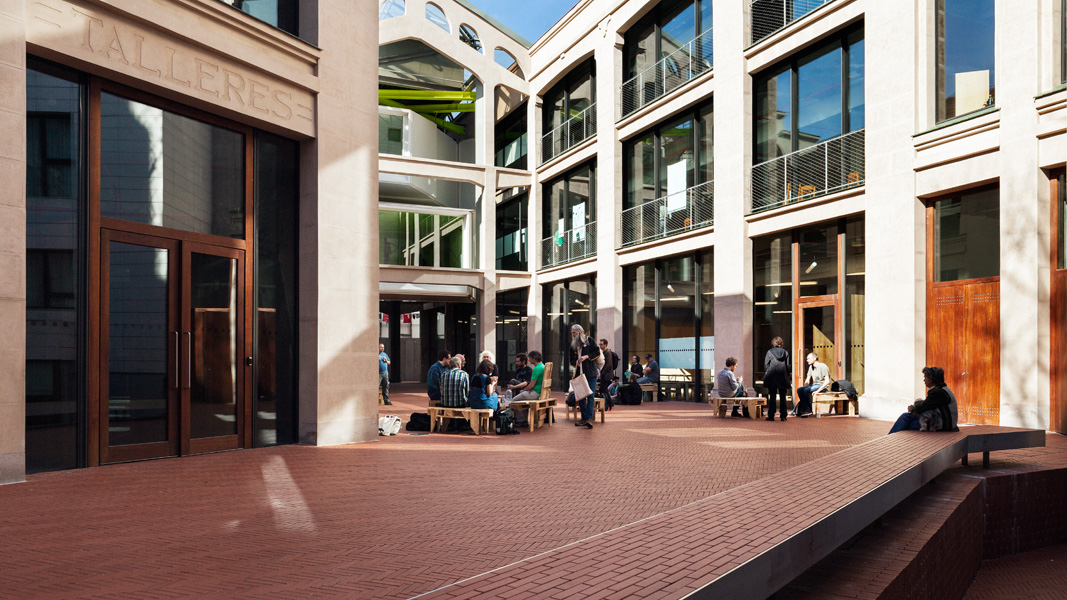 Perhaps more than anything else, it is the very strangeness of the diverging intentions found in the La Serrería Belga adaptation project for the Medialab-Prado that makes it possible for them to coexist, though not without a certain measure of irony. 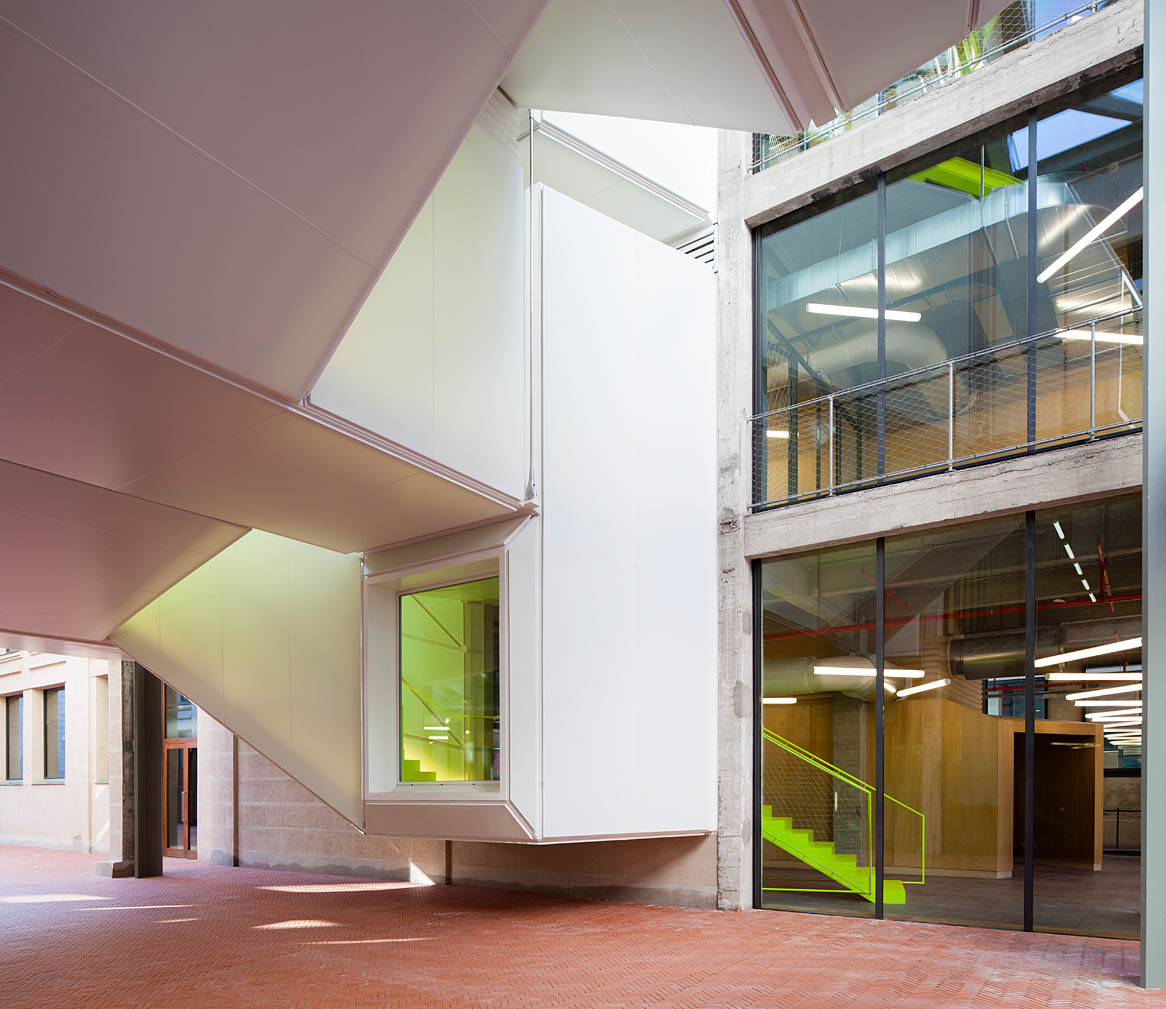 The first of these caustic coexistences stems from a certain institutional schizophrenia. While the ‘Paseo del Arte’ was transformed into Madrid City Hall’s banner to attract international tourism, an architectural competition was simultaneously promoted in the same area, which would end up serving an institution that sponsored debates that were deeply critical of this model. 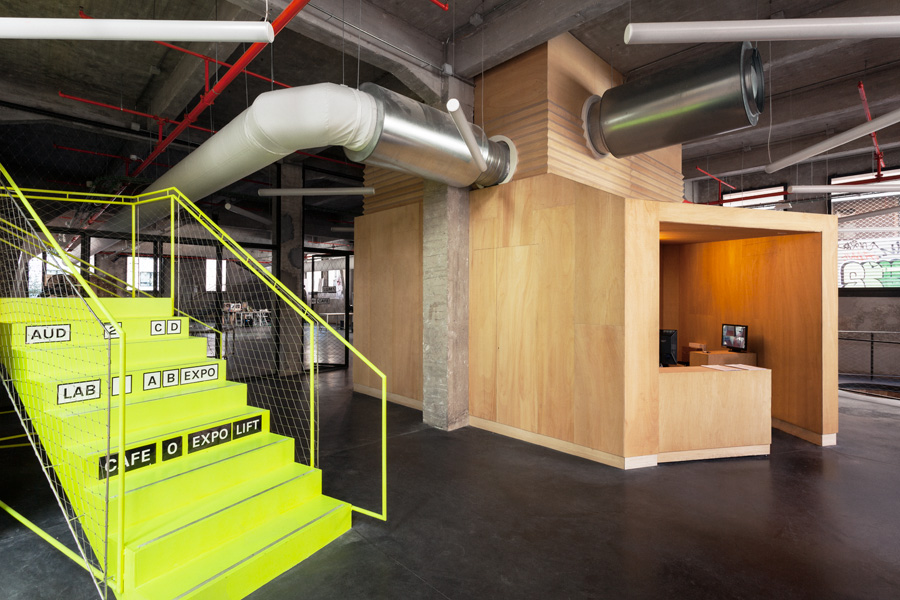 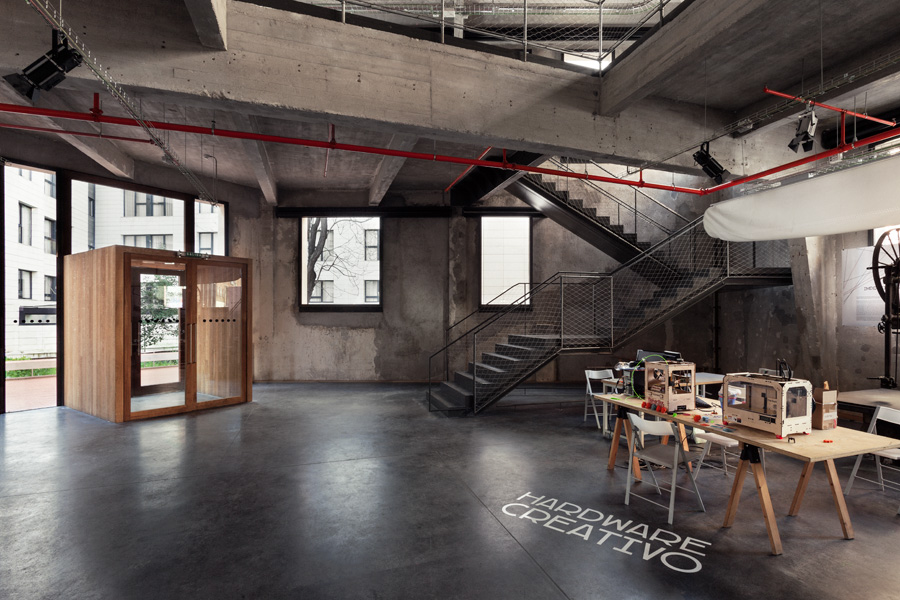 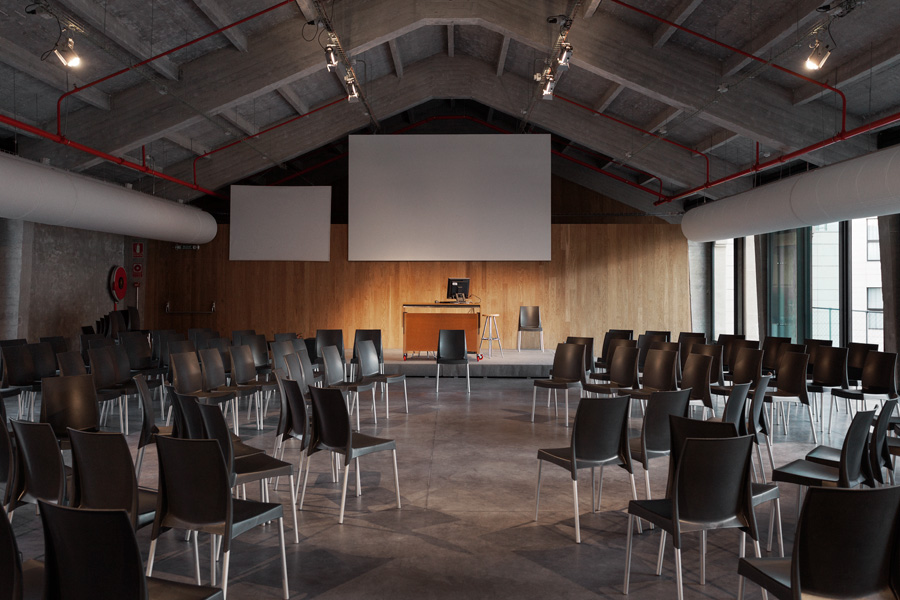 Medialab defines itself as “a space for the production, research and dissemination of digital culture and the confluence between art, science, technology and society”, and, in contrast to the traditional exhibition model, it promotes production as a permeable process, supplanting the figure of the spectator with that of the actor, or the figure of the mediator as a facilitator of connections. 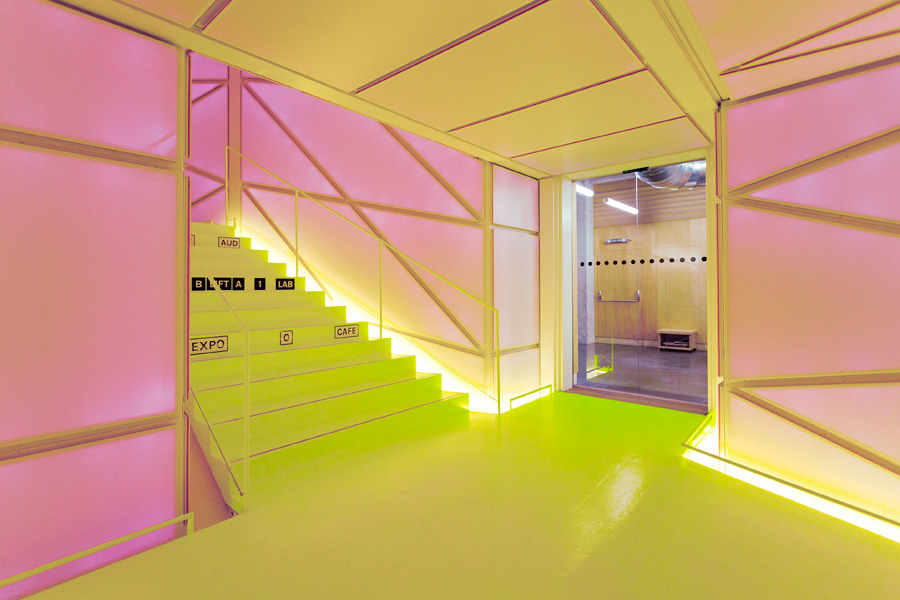 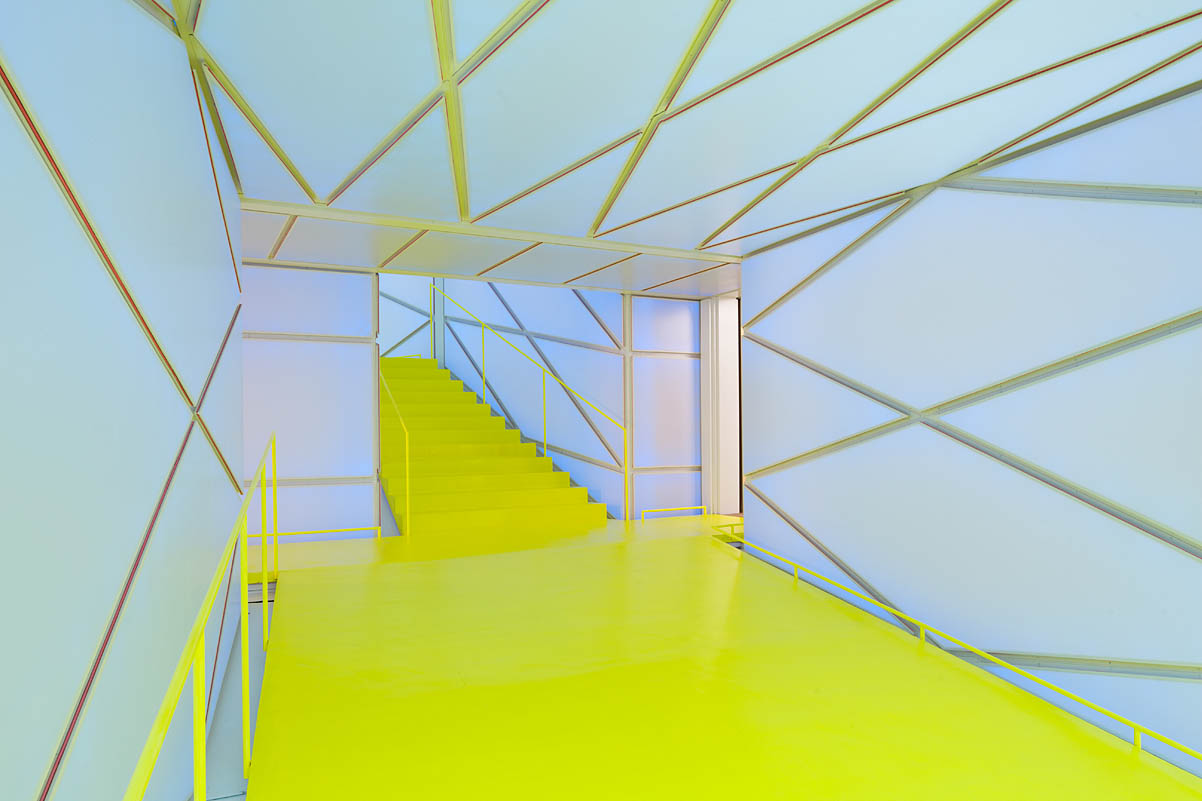 La Serrería vs La Cosa is another pattern of coexistence that, like a conflicting dialect, facilitated the occupation of the intermediate space existing between both rivals, beyond the conventional concept of restoration. 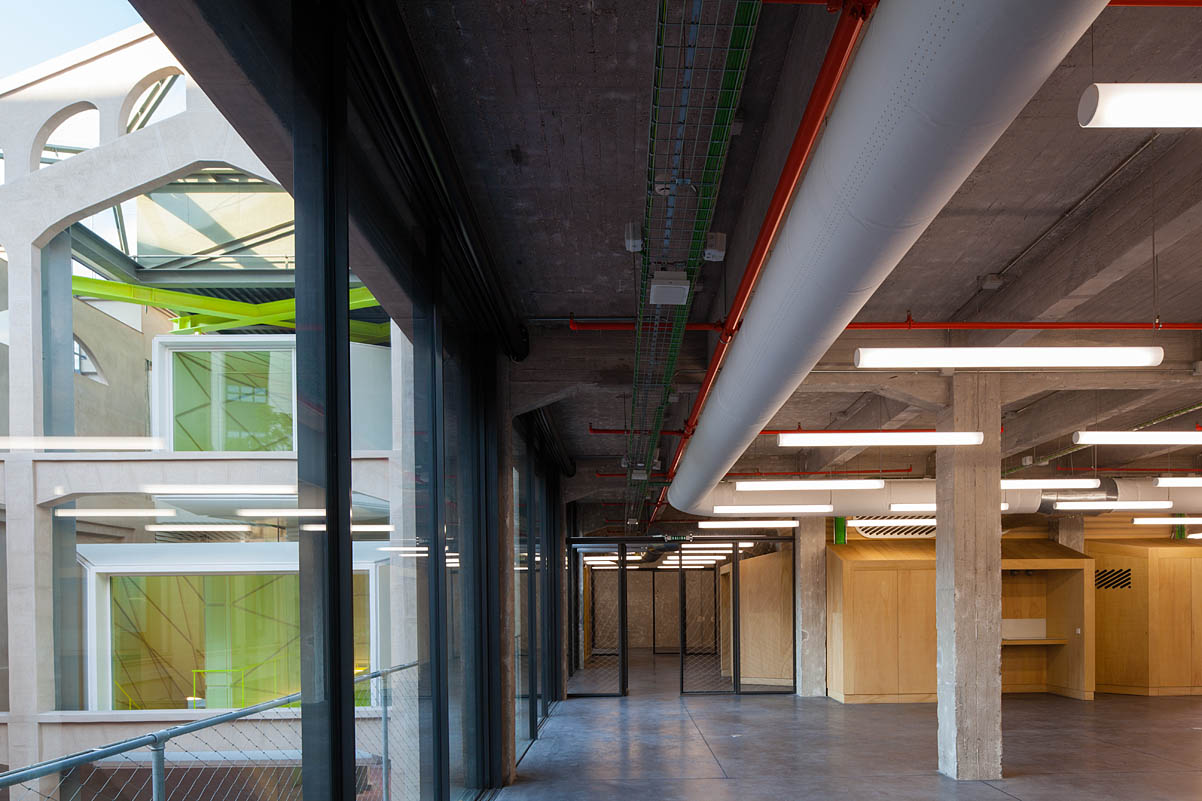 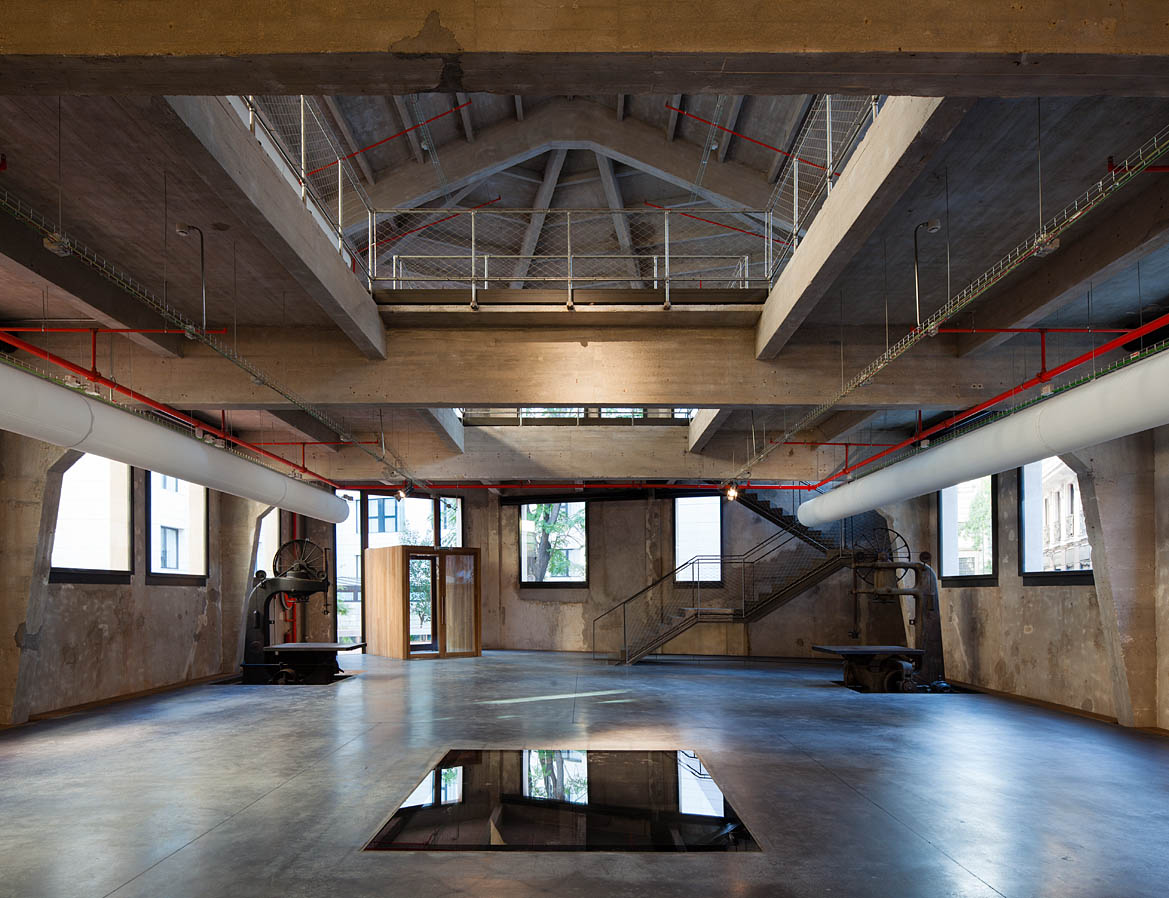 La Serrería Belga (The Belgian Sawmill) was built in various stages starting in the 1920’s by the architect Manuel Álvarez Naya and it was one of the first architectural achievements in Madrid to employ reinforced concrete. For its part, La Cosa (The Thing), is the name that we have used to refer to the group of mechanisms, installations and facilities that, when assembled, made it possible to bring the building up to date with current requirements. A light and articulated structure with a certain pre-technological air that, infiltrated in the building, enables a large potential for transformation. 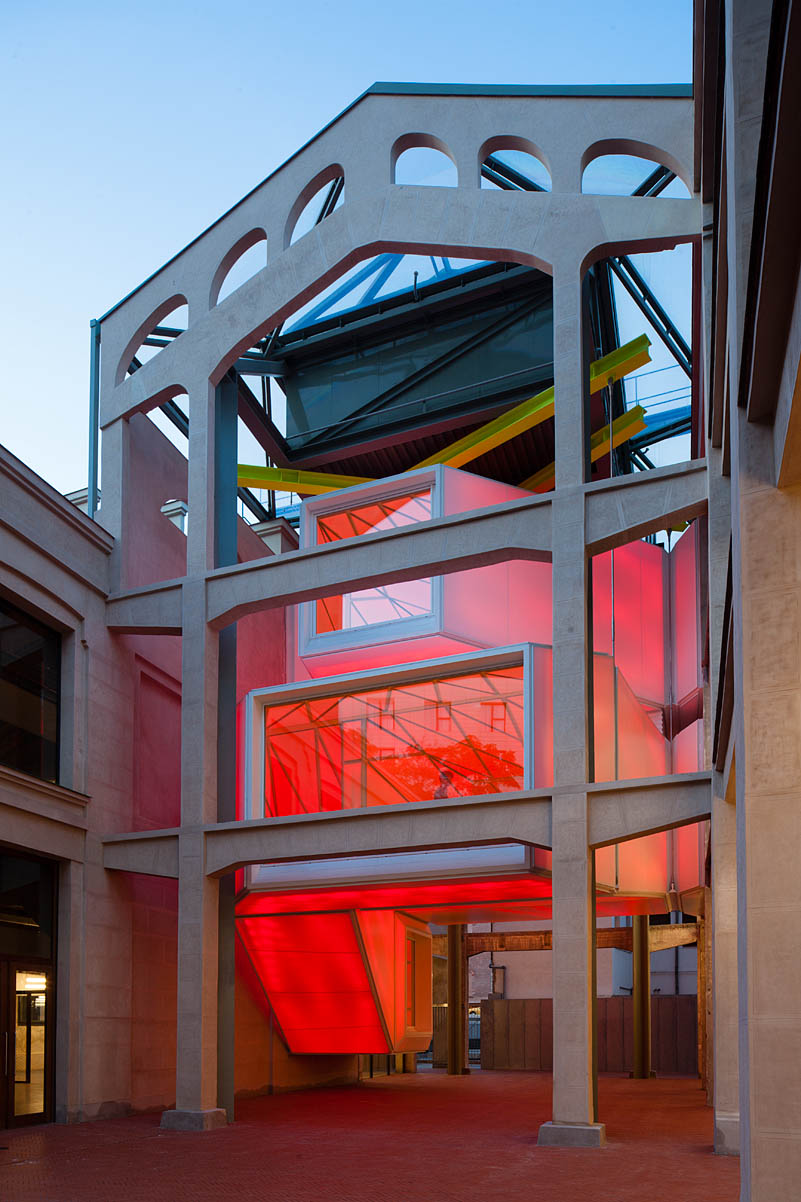 Ultimately, it is the coexistence of opposites that made it possible to think of the halfway point between these interlocutors not as a consummate product, but rather as an open, versatile process activated by its users. 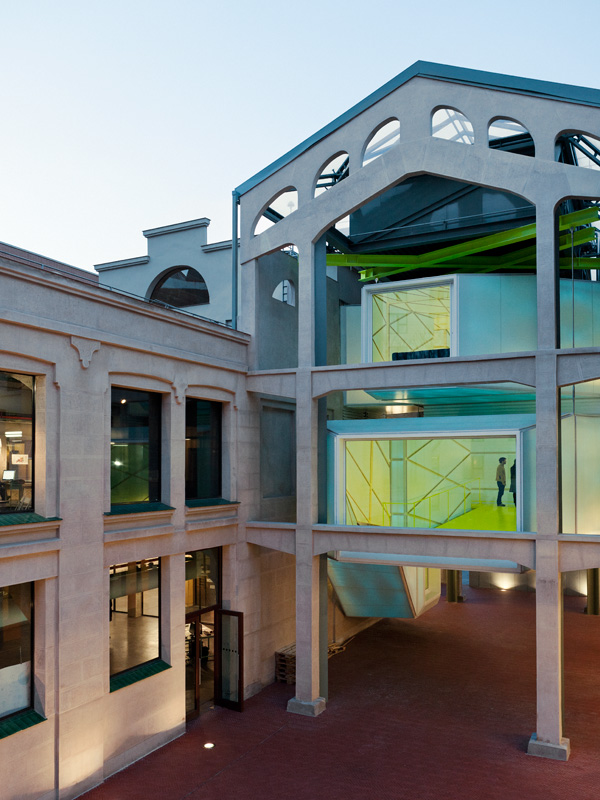 These forms of coexistence created the scope for some of the strategies used in this adaptation:
– The appropriation of the existing building, not only as a historic narration, but also as a container for latent energies that have joined the project as effective material. Any duplication or incorporation of elements or solutions that had already been contributed by the Serrería building was avoided. 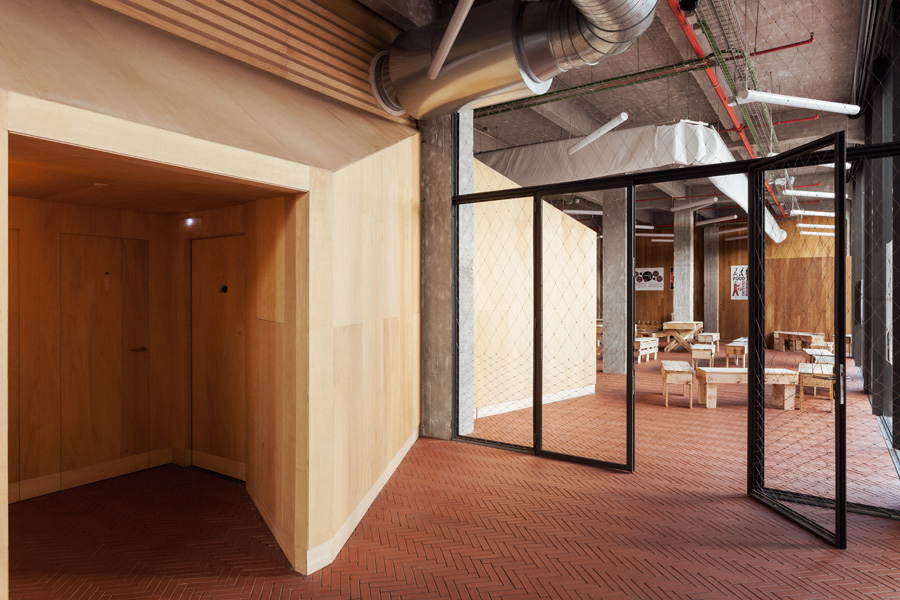 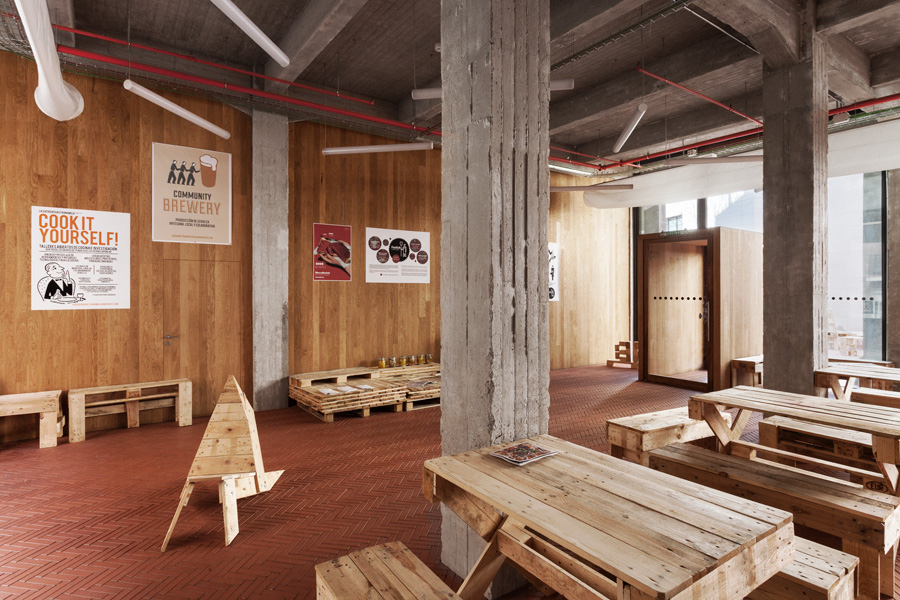 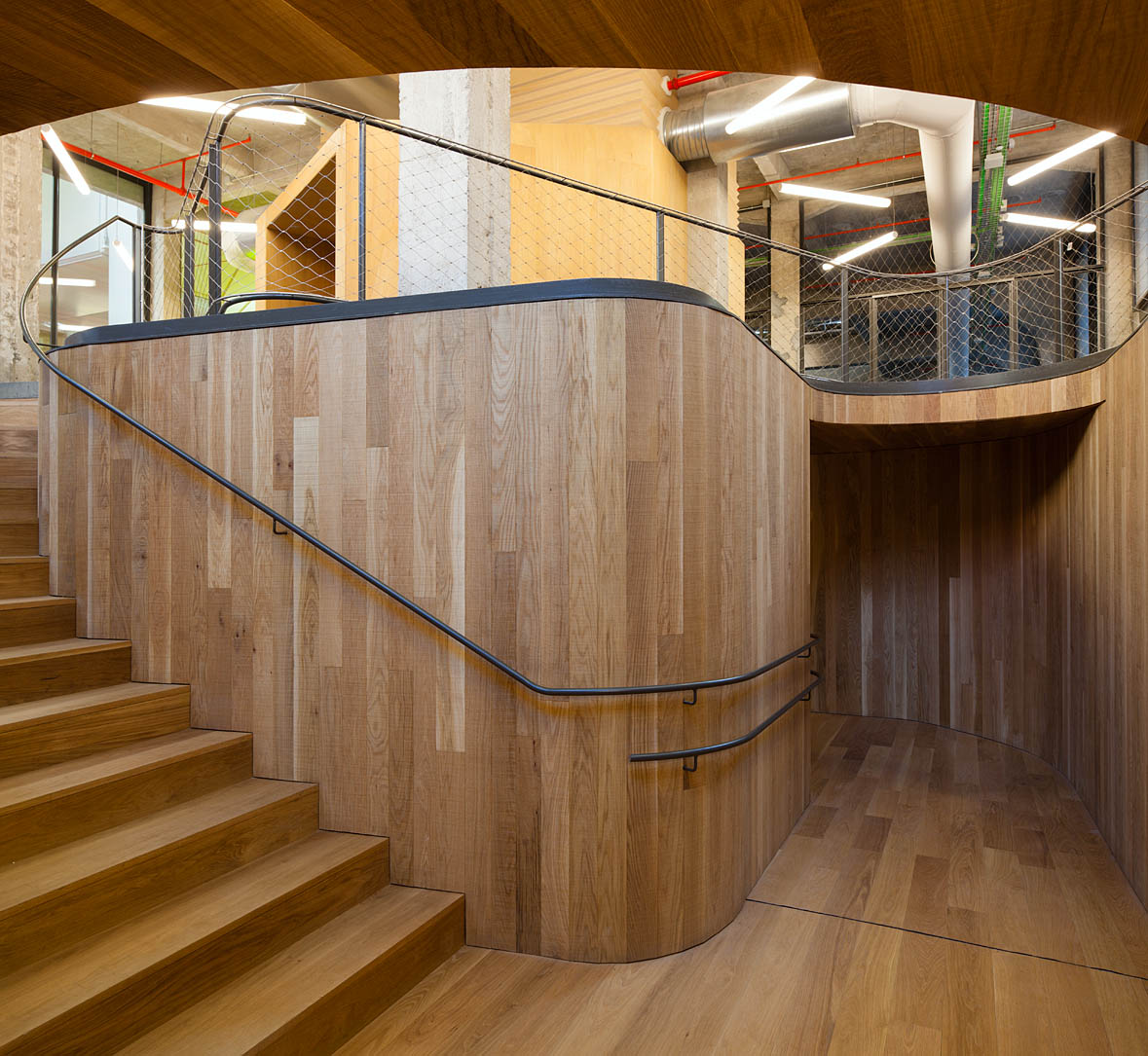 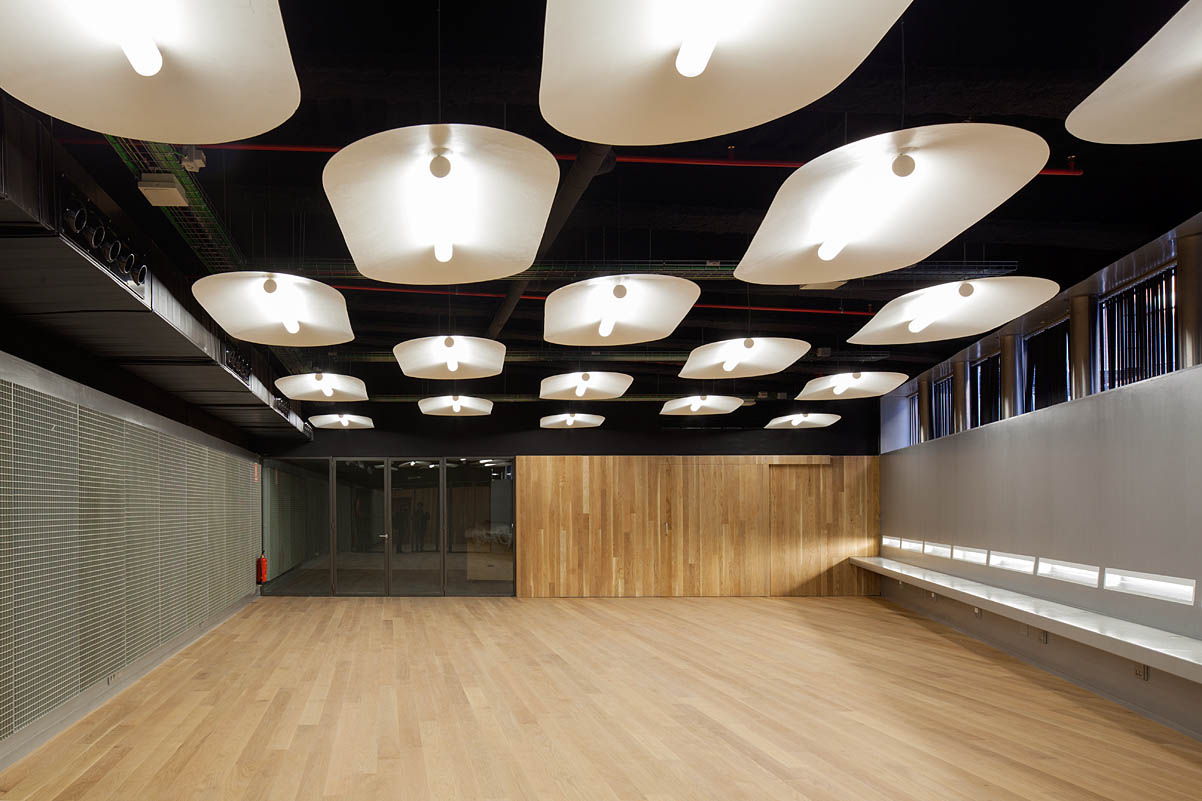 – The non-specific treatment of the spaces. This condition resulted in a homogenous approach to material solutions and the uniform distribution of installations. 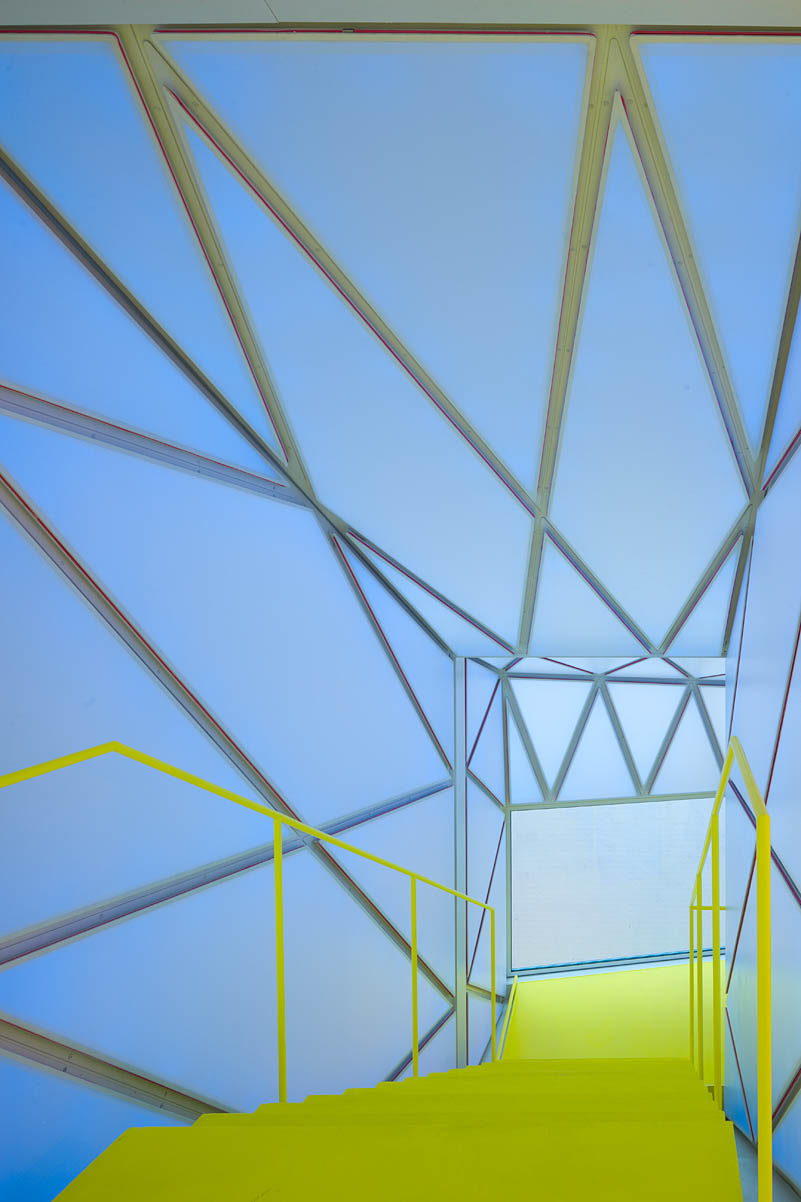 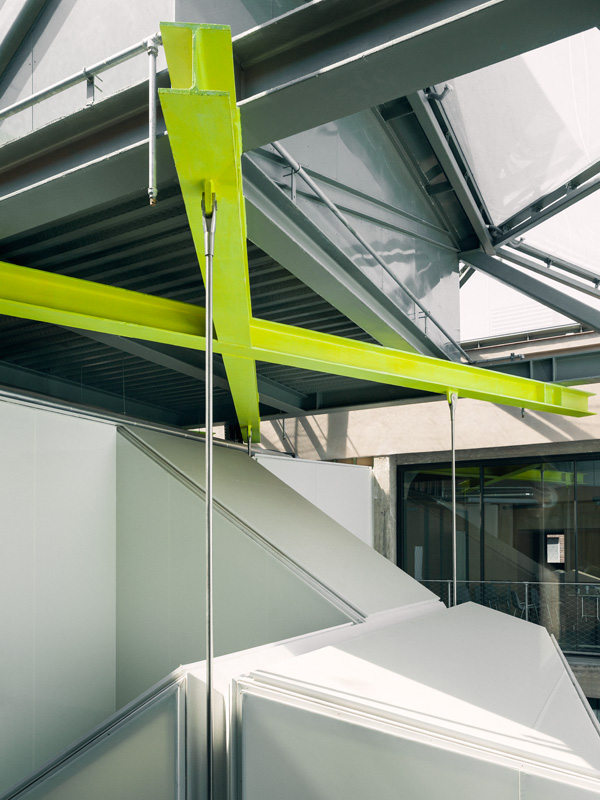 – Thinking about the action as a stratification with different levels of change over time. Lightweight construction systems that can be disassembled were chosen, as were materials whose durability and adaptability will not condition future transformations. 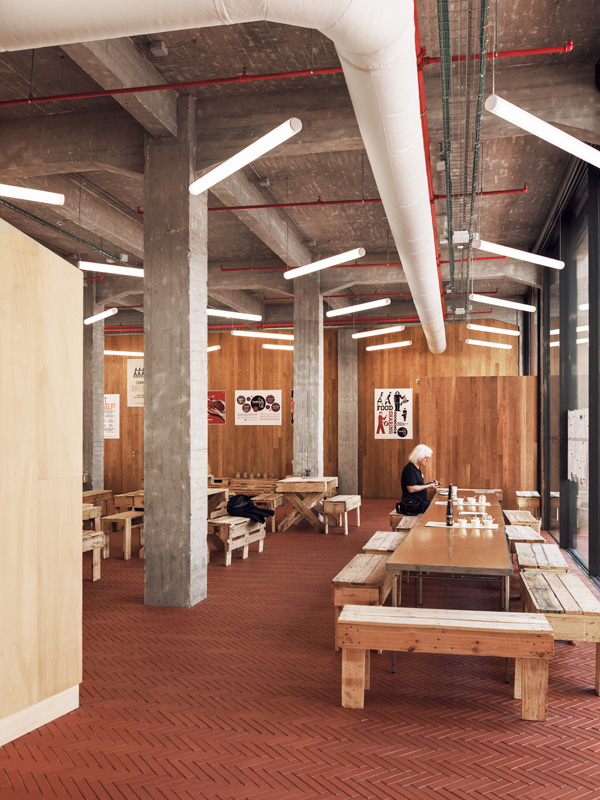 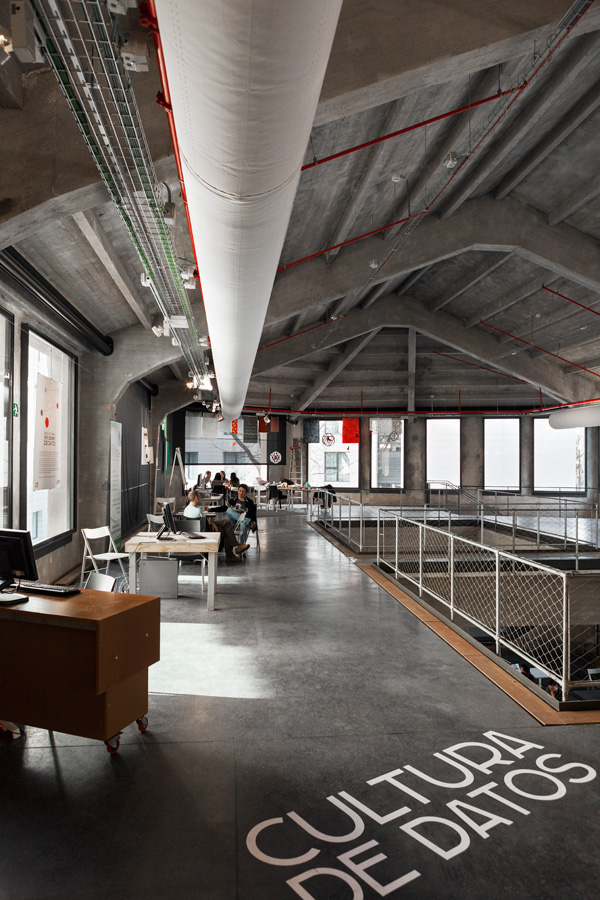 – Looking at each new intervention as an opportunity to incorporate support systems for creative actions and research. This included solutions such as the use of double blinds as projection screens, taking advantage of voids in the existing structure to create a retro-projected floor, the use of the dividing wall as a digital facade and the design of La Cosa as a mechanism for digital experimentation. 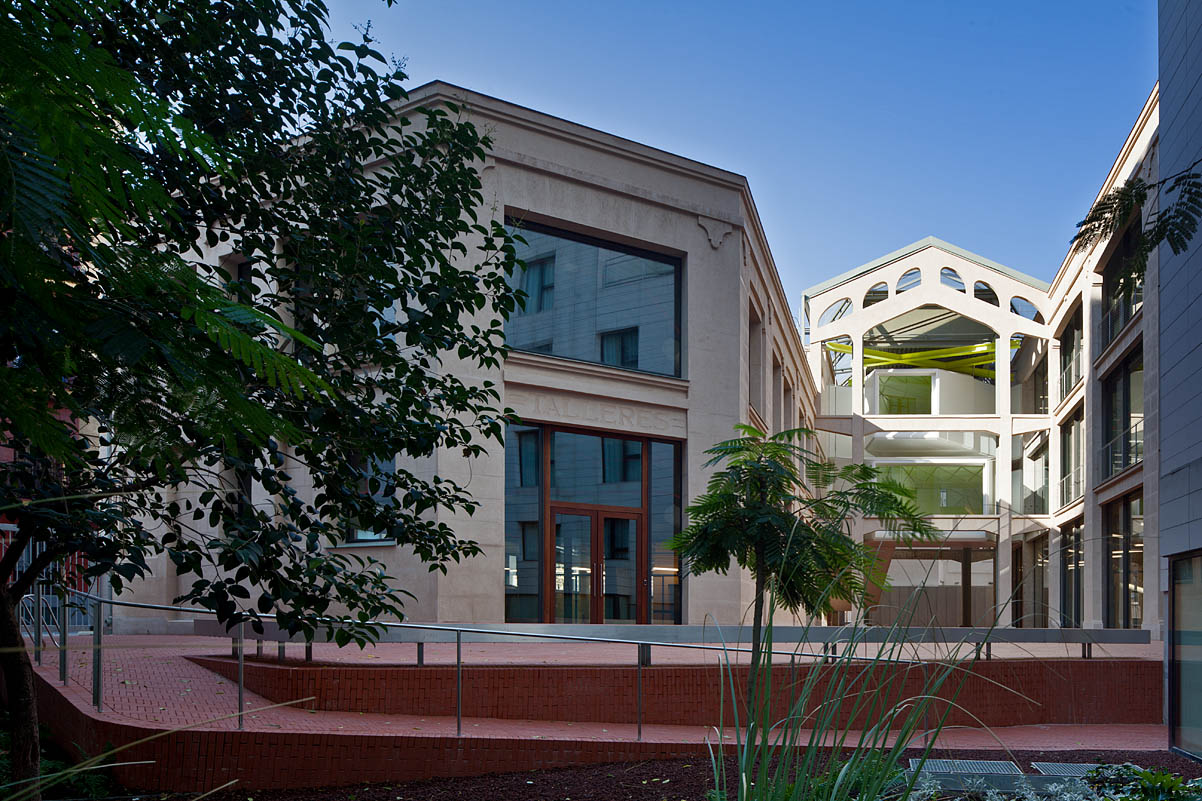