a r r o v a | atelier . rojo-vergara transformed an old motorbike repair shop in the Milagrosa district of Pamplona into Loft A dwelling with working space aiming at the maximum flexibility of the living space that can be appropriated according to the needs of its users delivering this way an open, timeless place in which to live and work in a flexible manner. 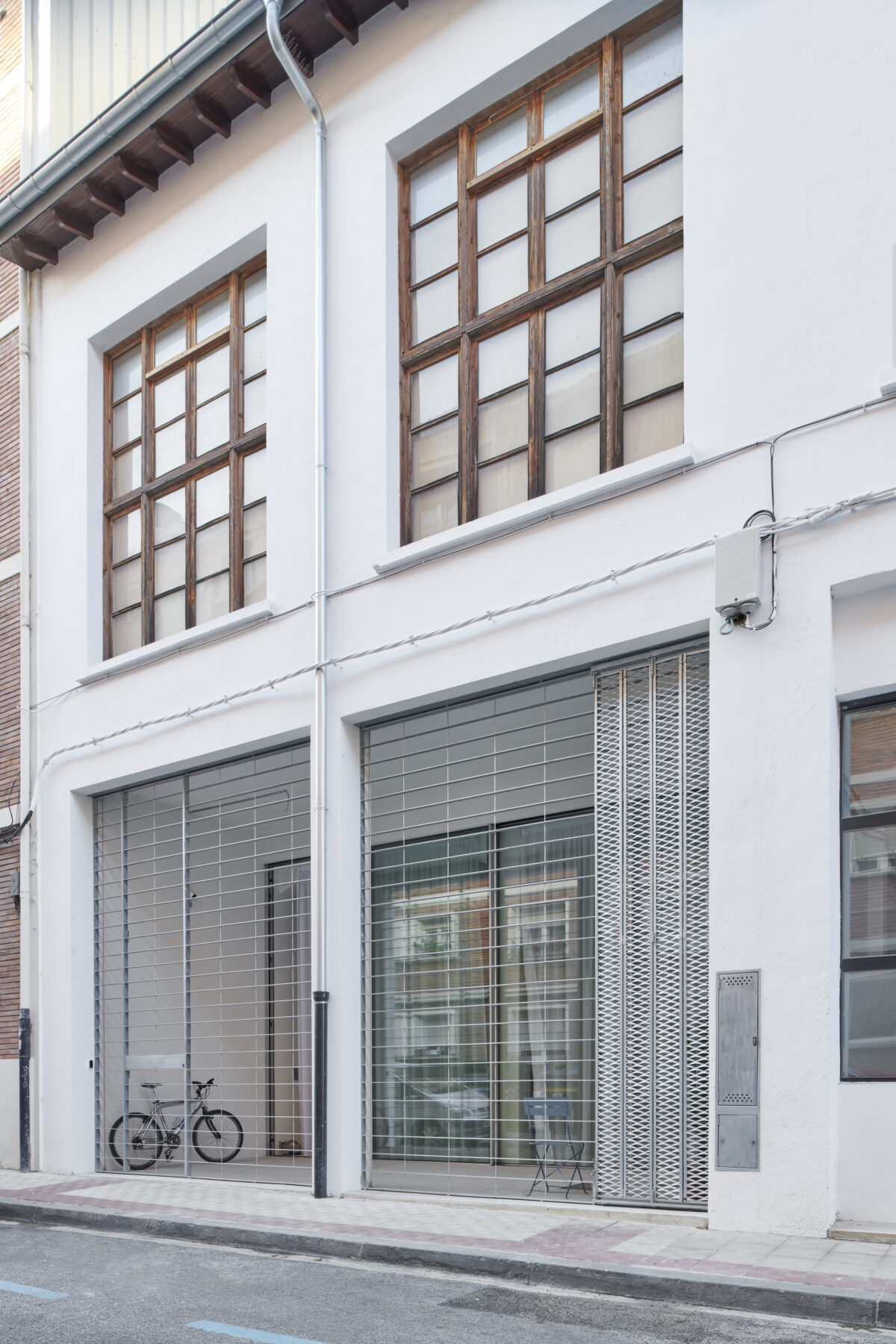 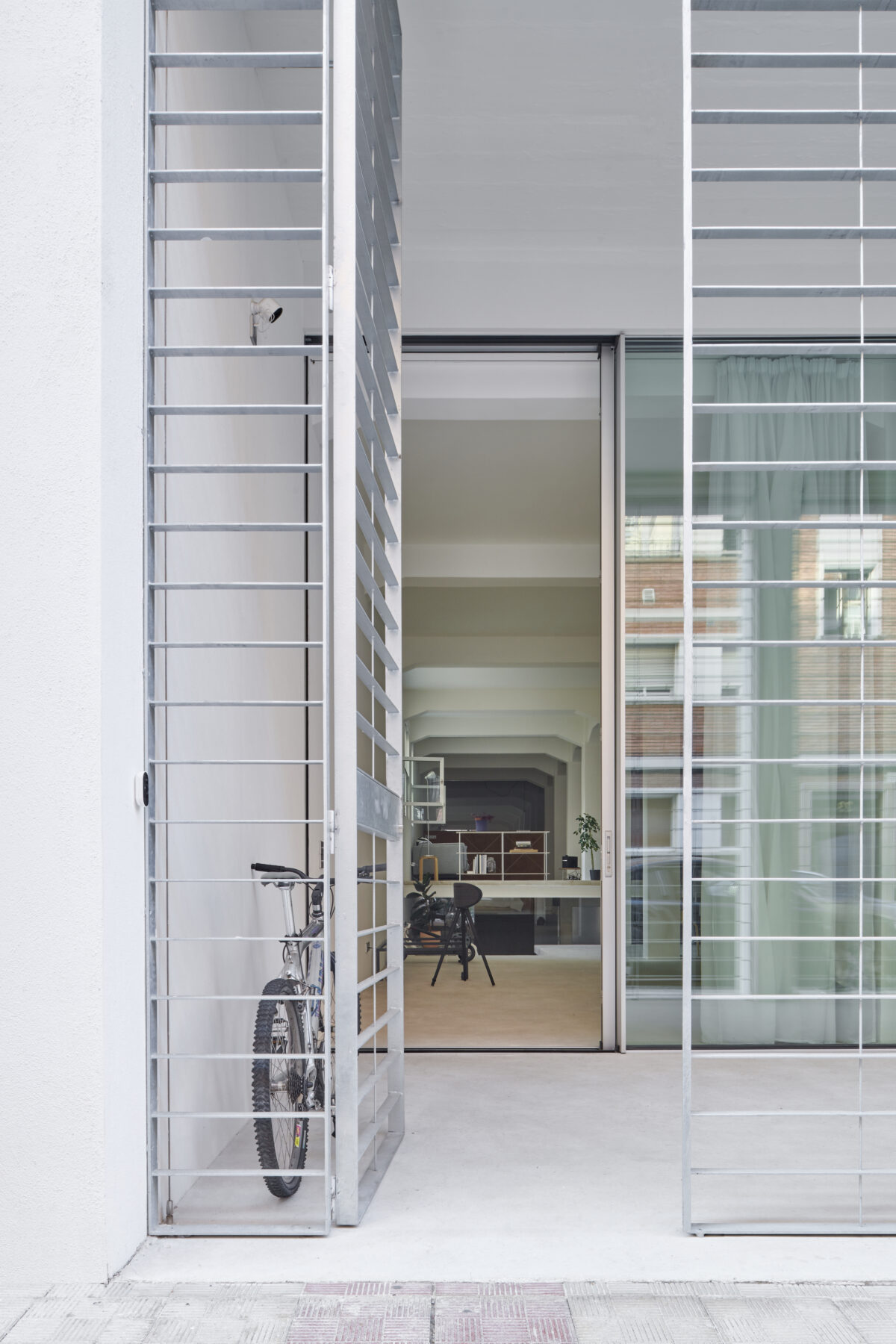 The intention of the project is to be a kind of prototype for this form of reconversion in the neighbourhood, as it has a large number of industrial premises now in disuse and their transformation would greatly help to revitalise the area, a possibility that is however unknown in many cases to the local residents. 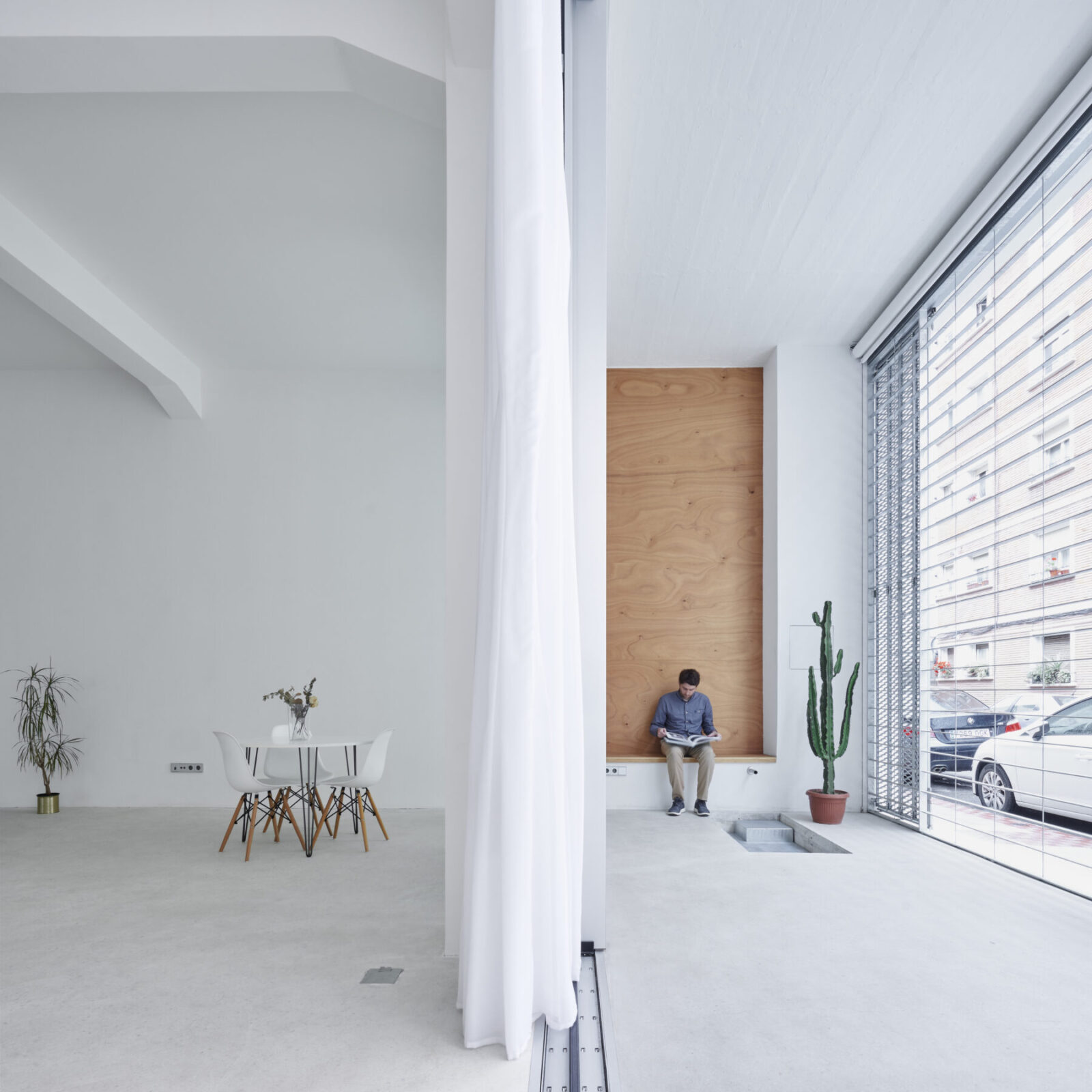 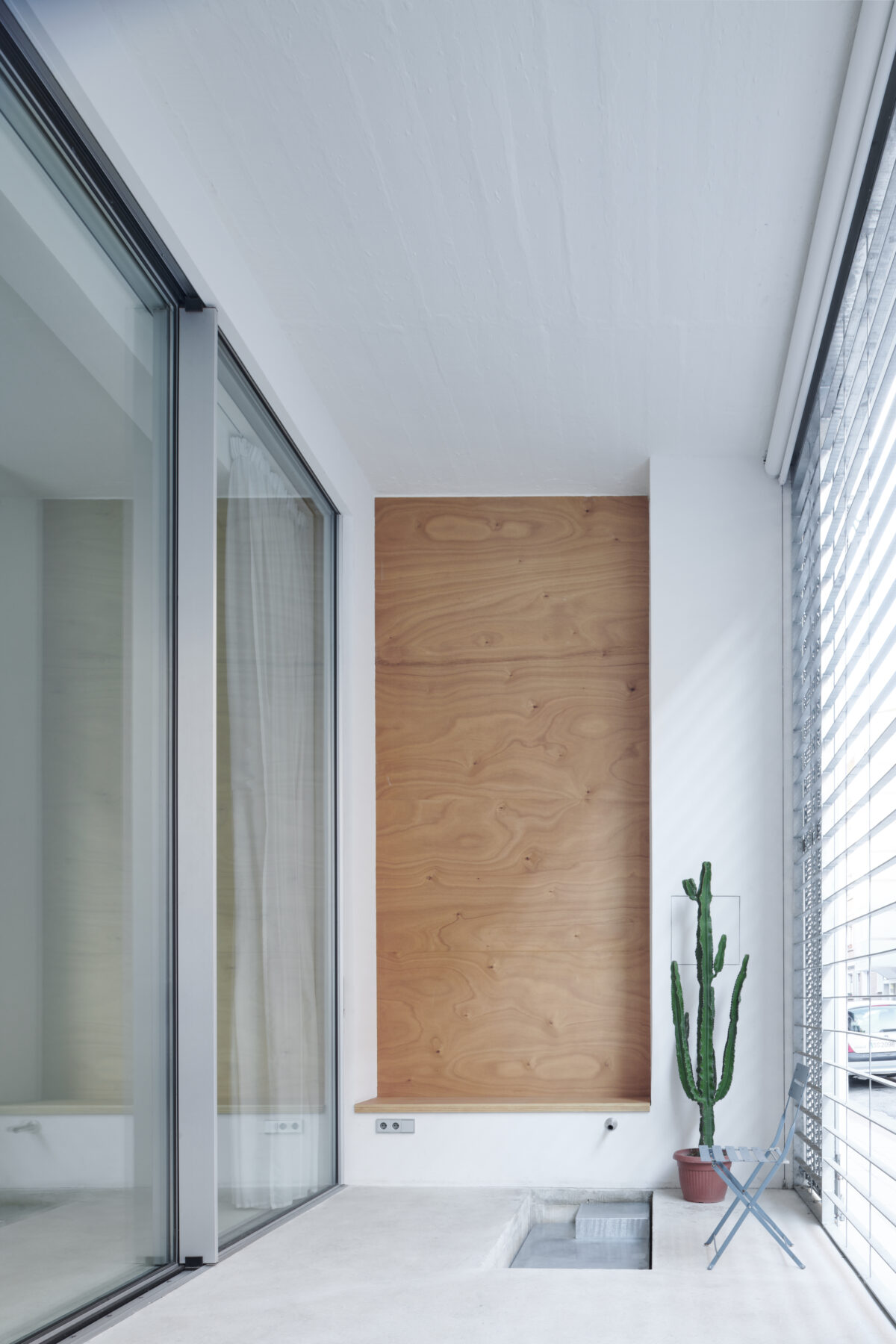 Given the difference in level between the streets on which the loft is situated, it acts as a podium for the rest of the building. One of the primaries aims of the project was to strip the shop of all the unnecessary existing elements. 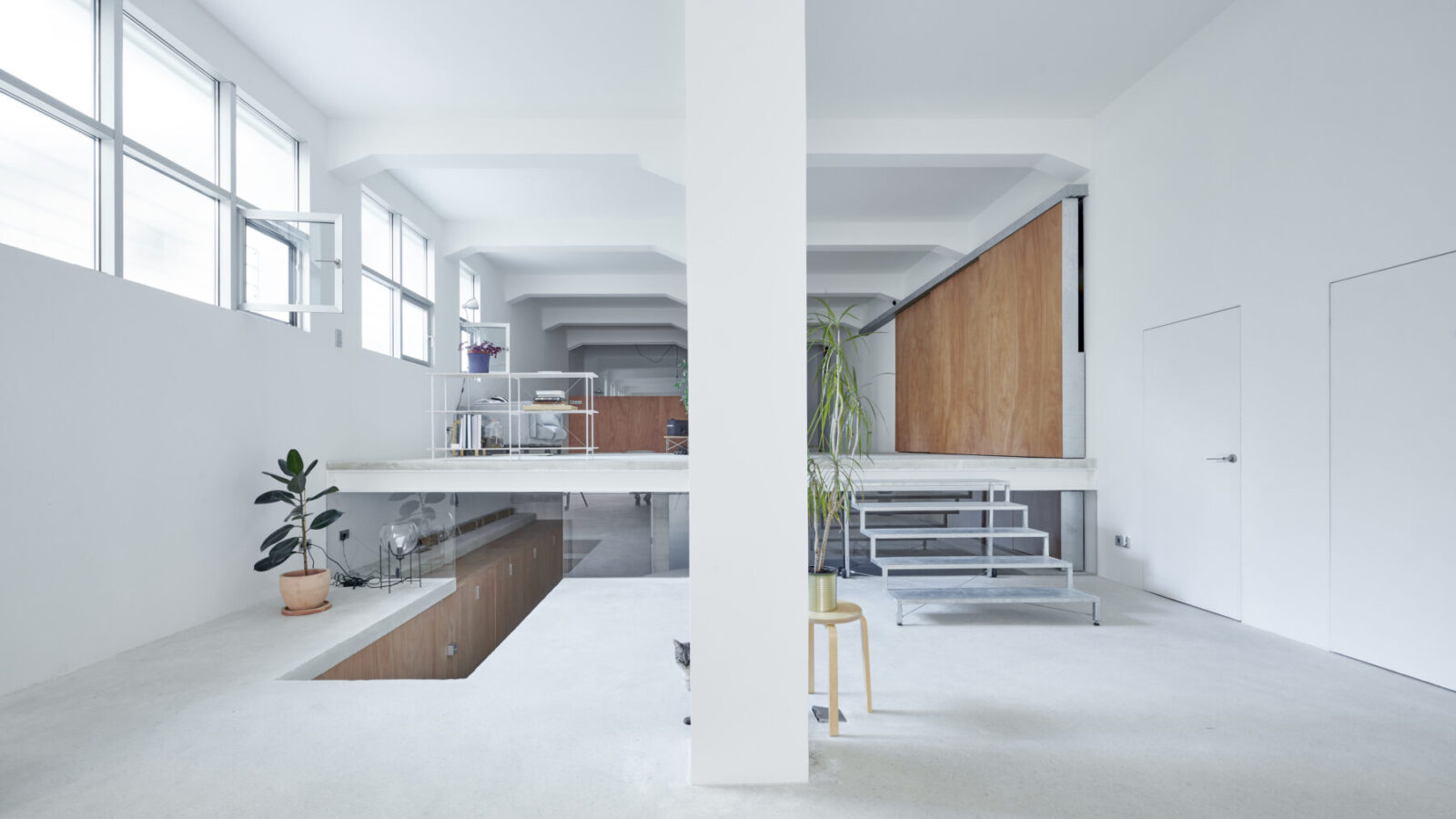 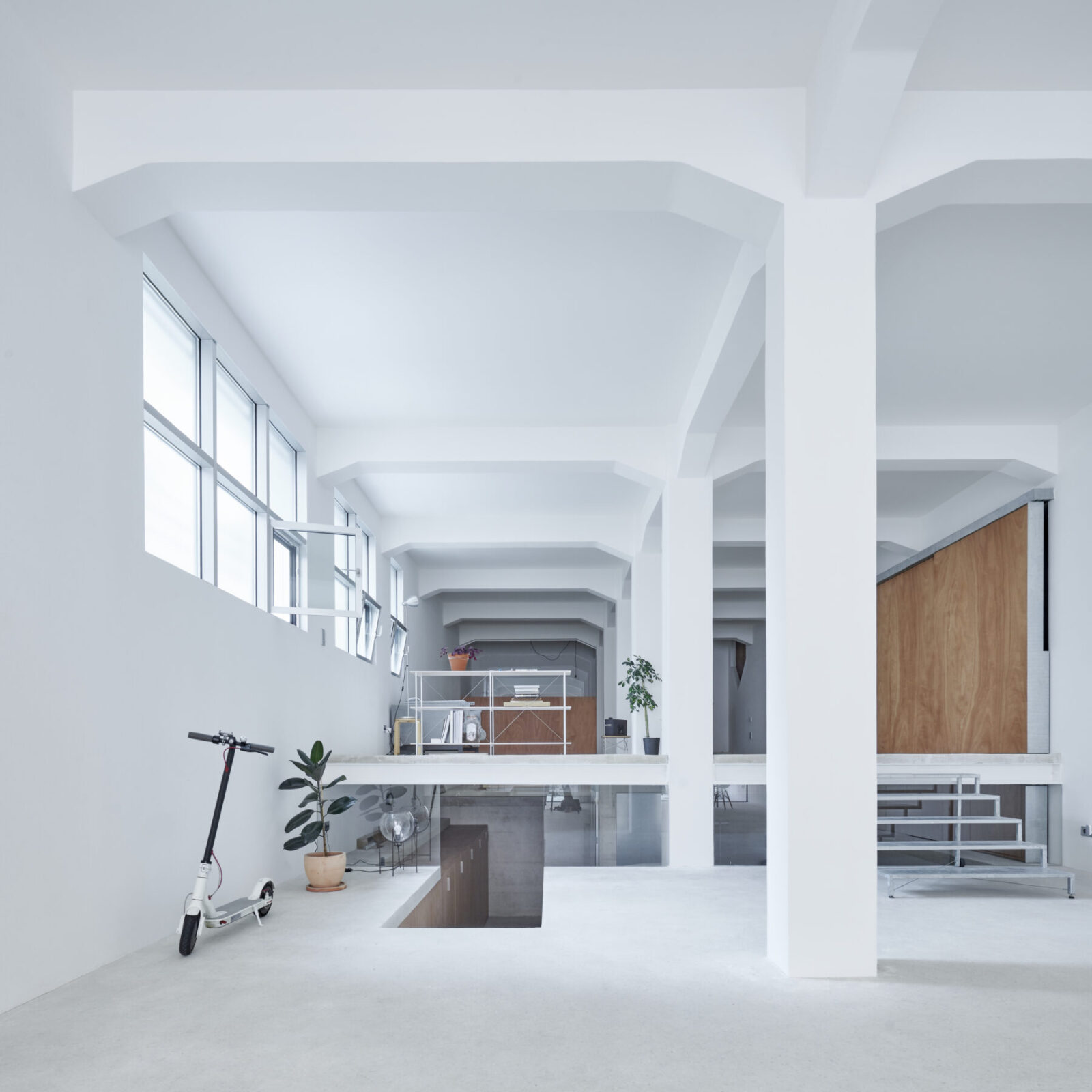 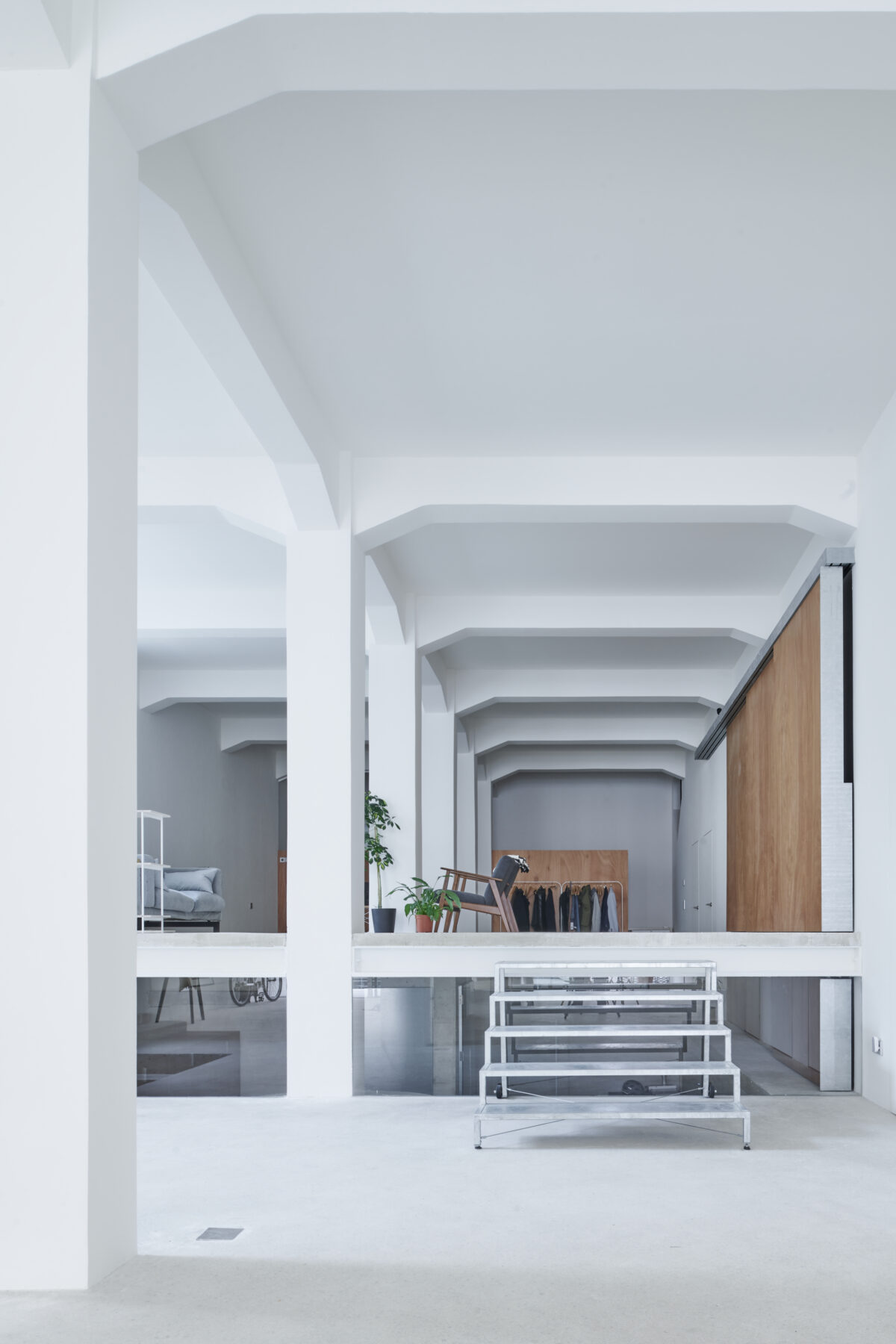 The space would then be freed up to show the powerful and plastic structure that supports the building. 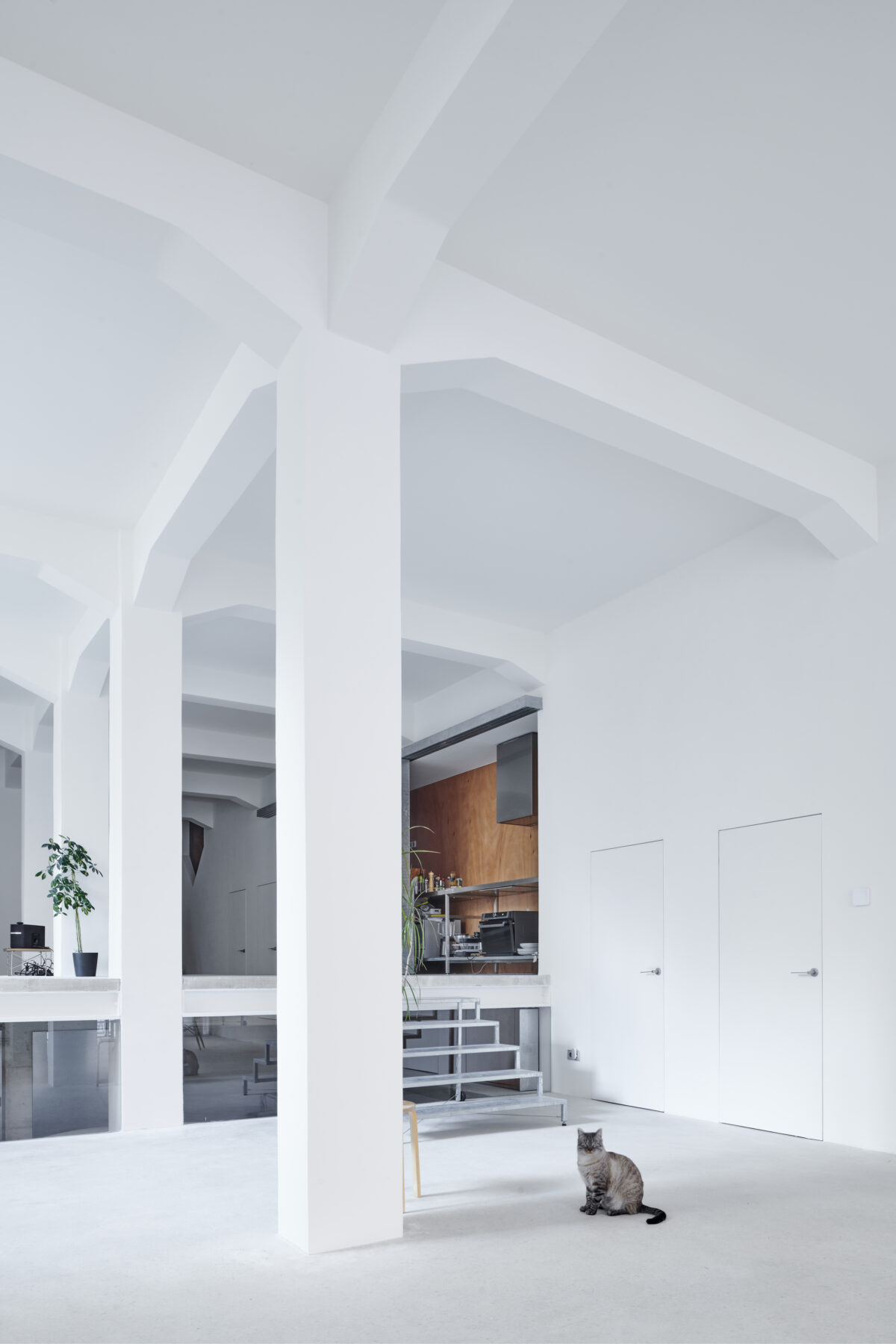 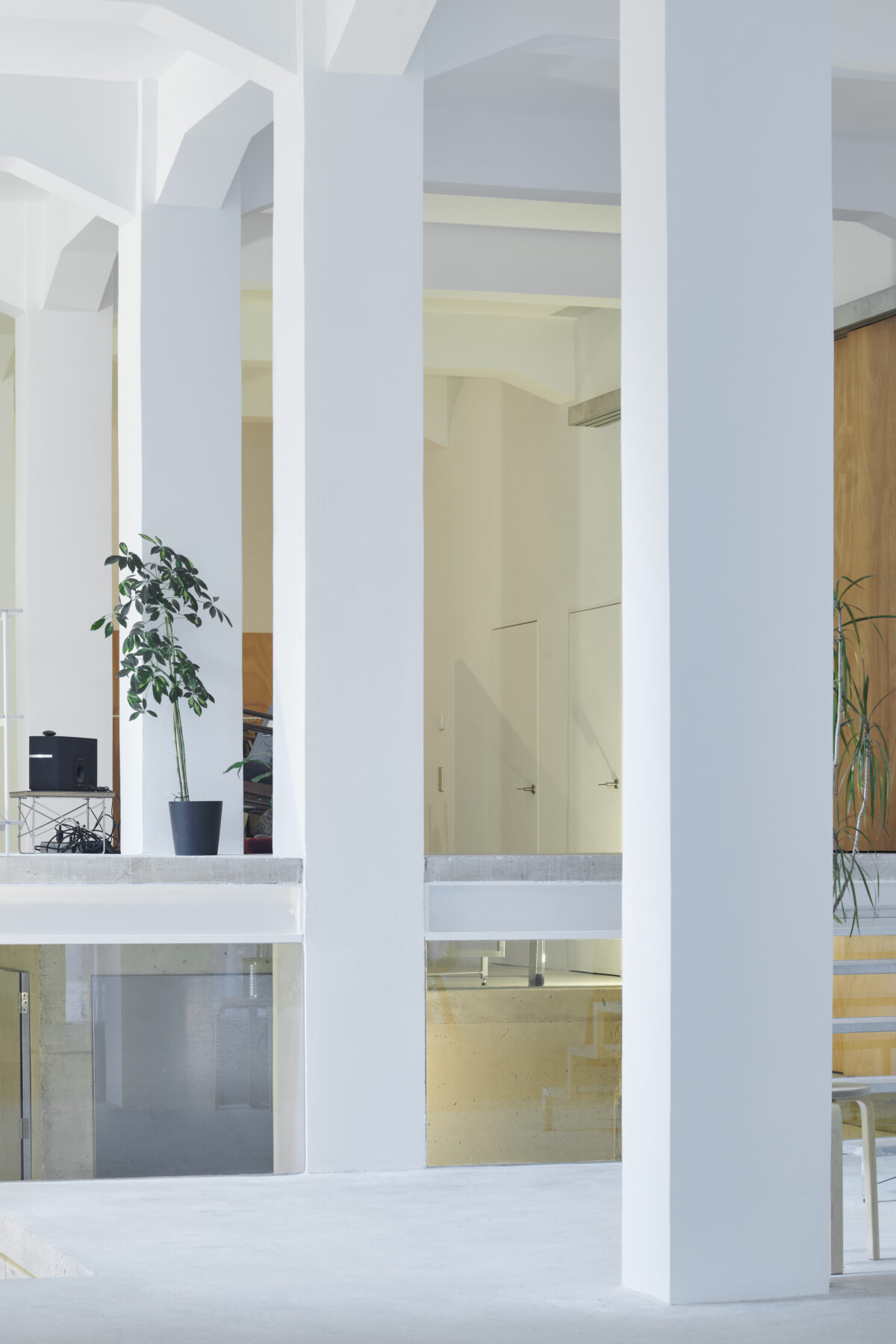 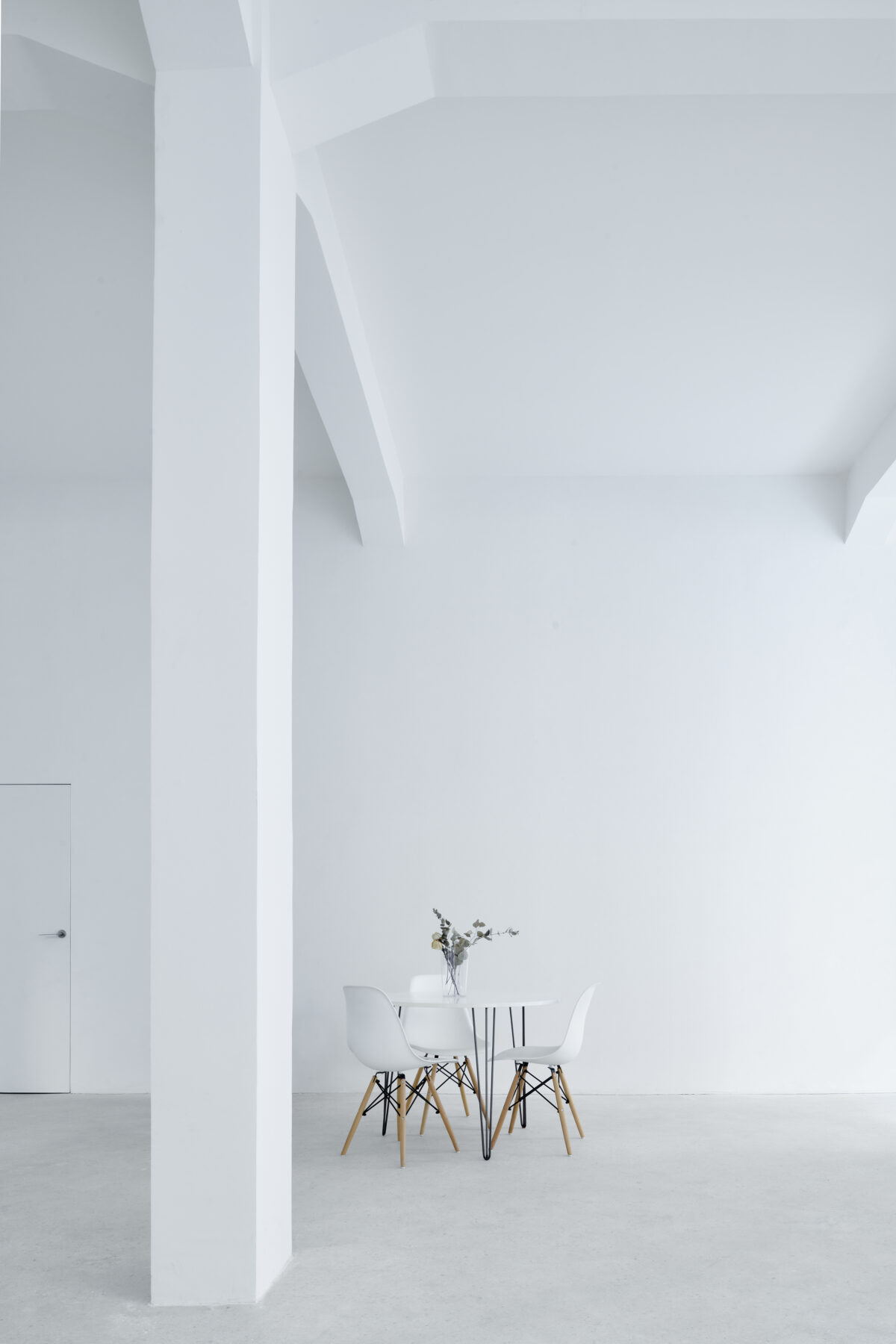 The present structural system, which is tectonic in nature as it is composed of concrete pillars, beams and slabs, also allows the façades to open up towards both the street and the block courtyard. The given transparency of these fronts and their different orientations give the space a great serenity thanks to a diffuse and continuous white light. 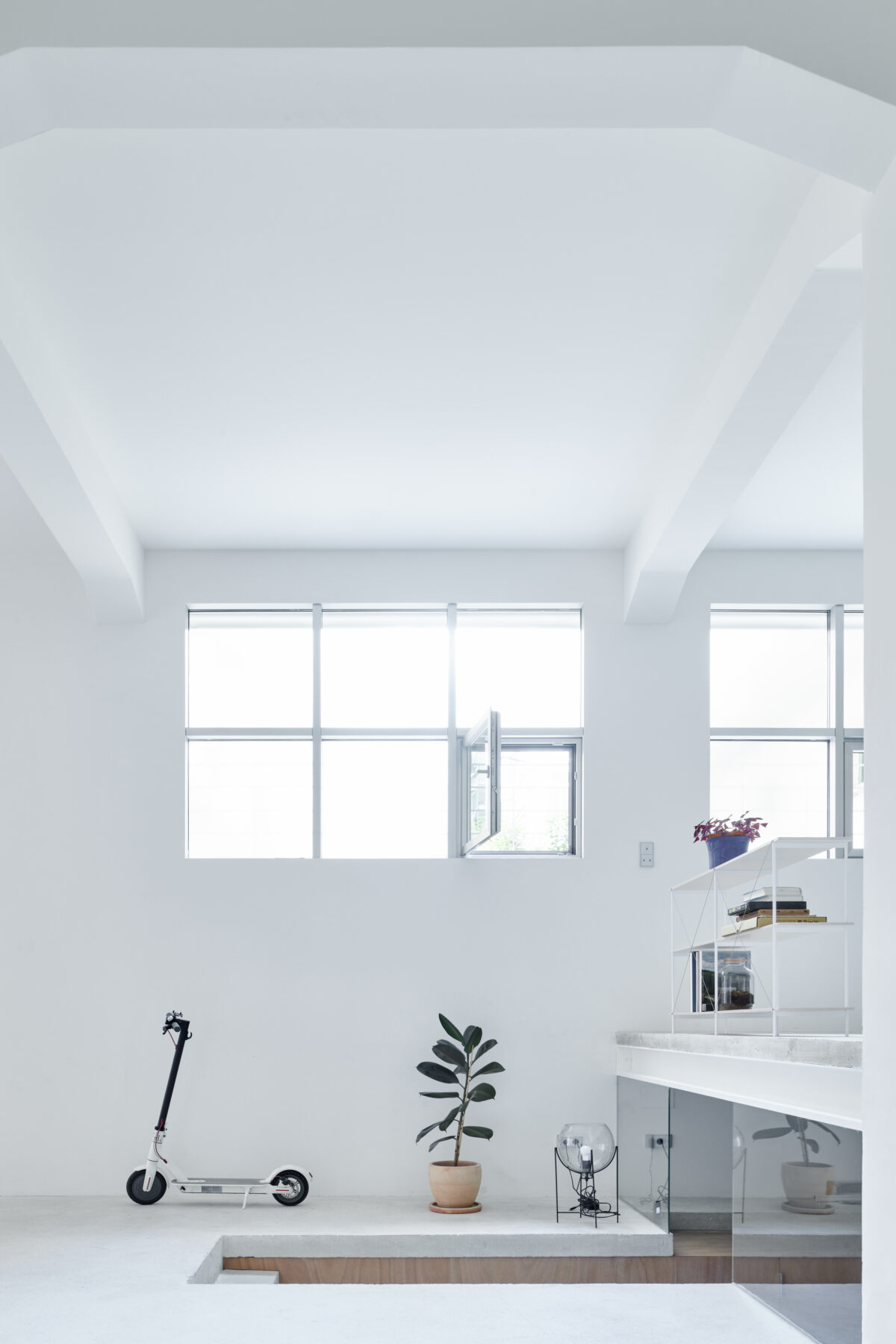 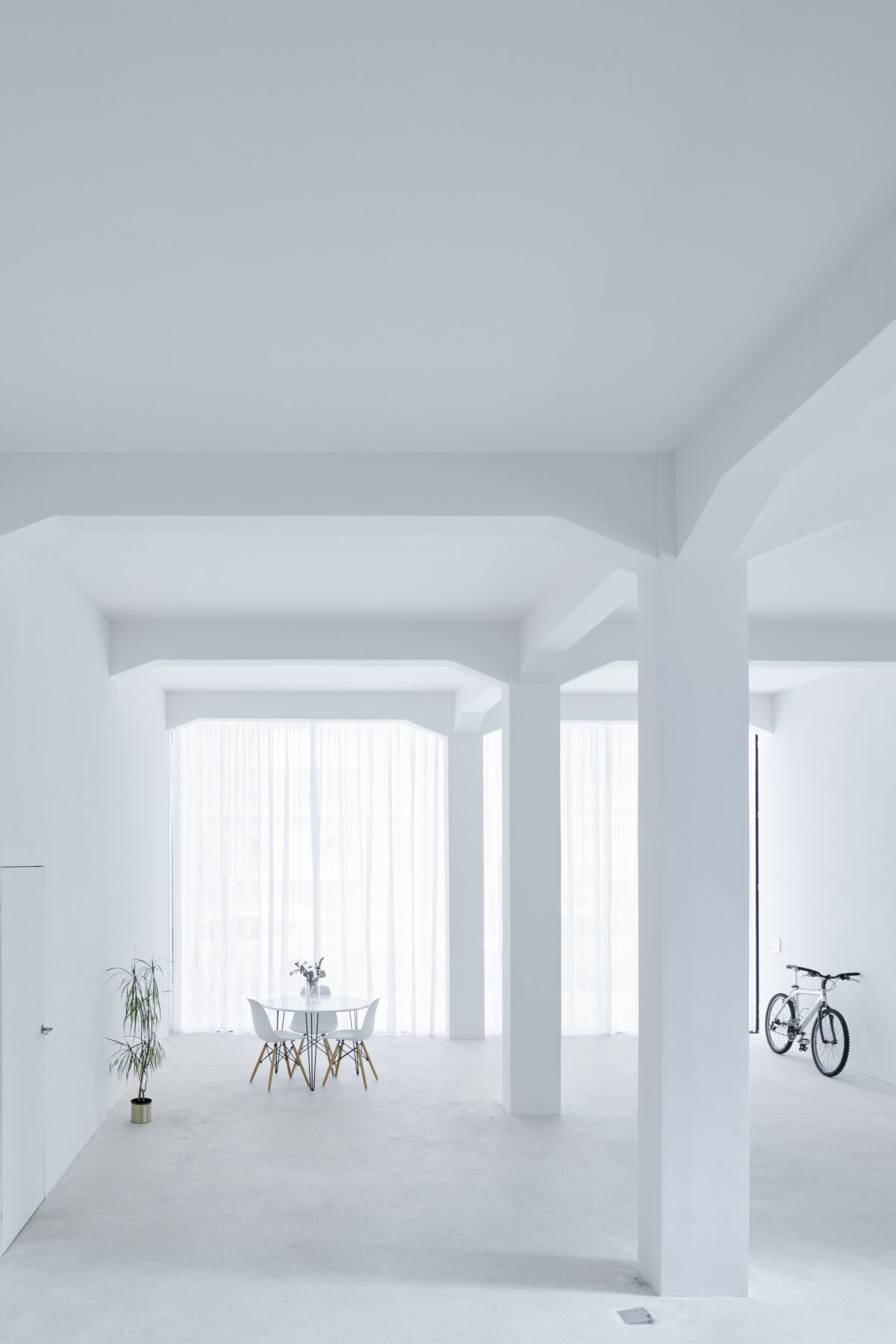 Furthermore, this operation of dismantling and aperture allows the entrance to be transformed into a porch, a semi-private urban garden that acts both as a filter and as a space of union and transition between the house and the street. 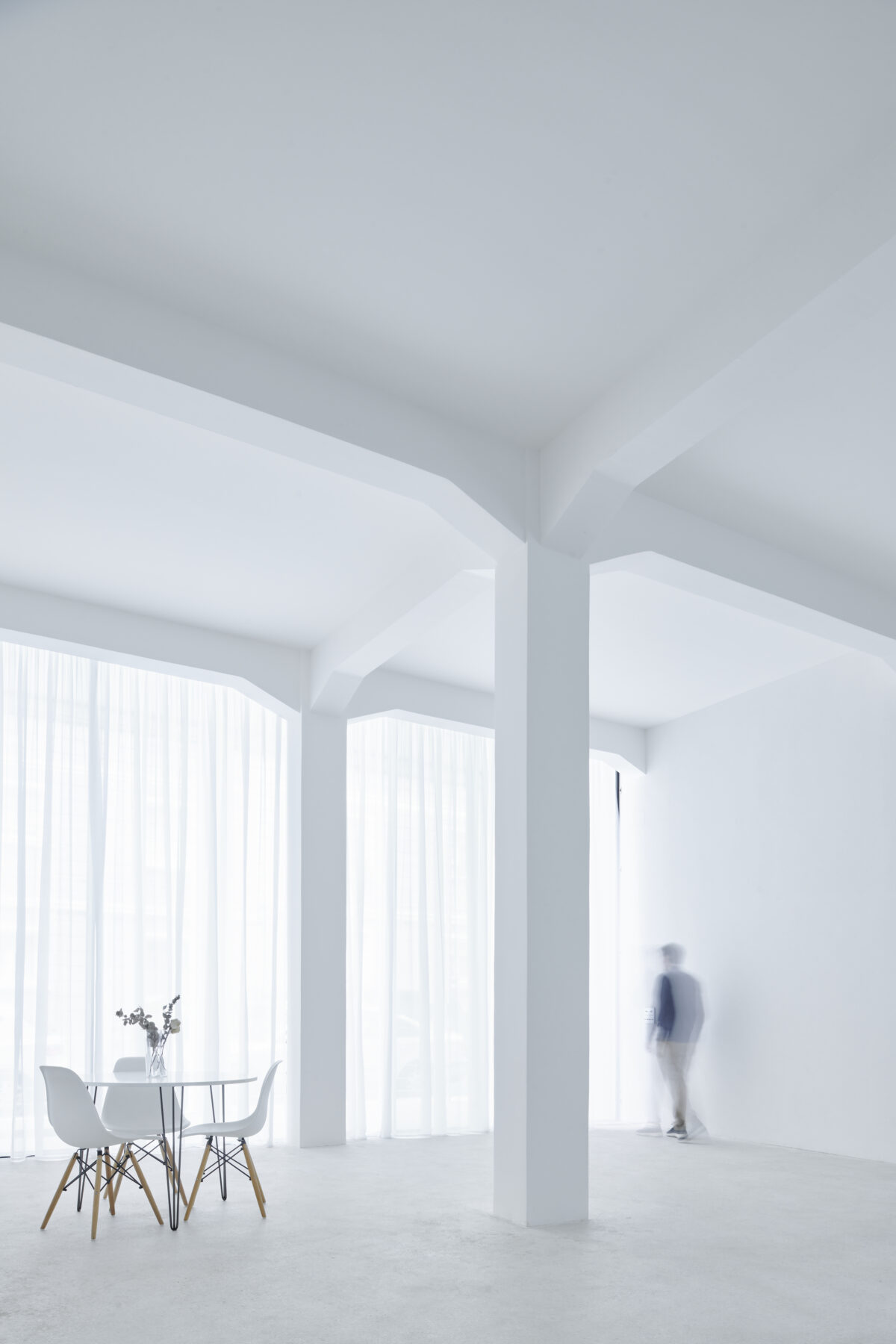 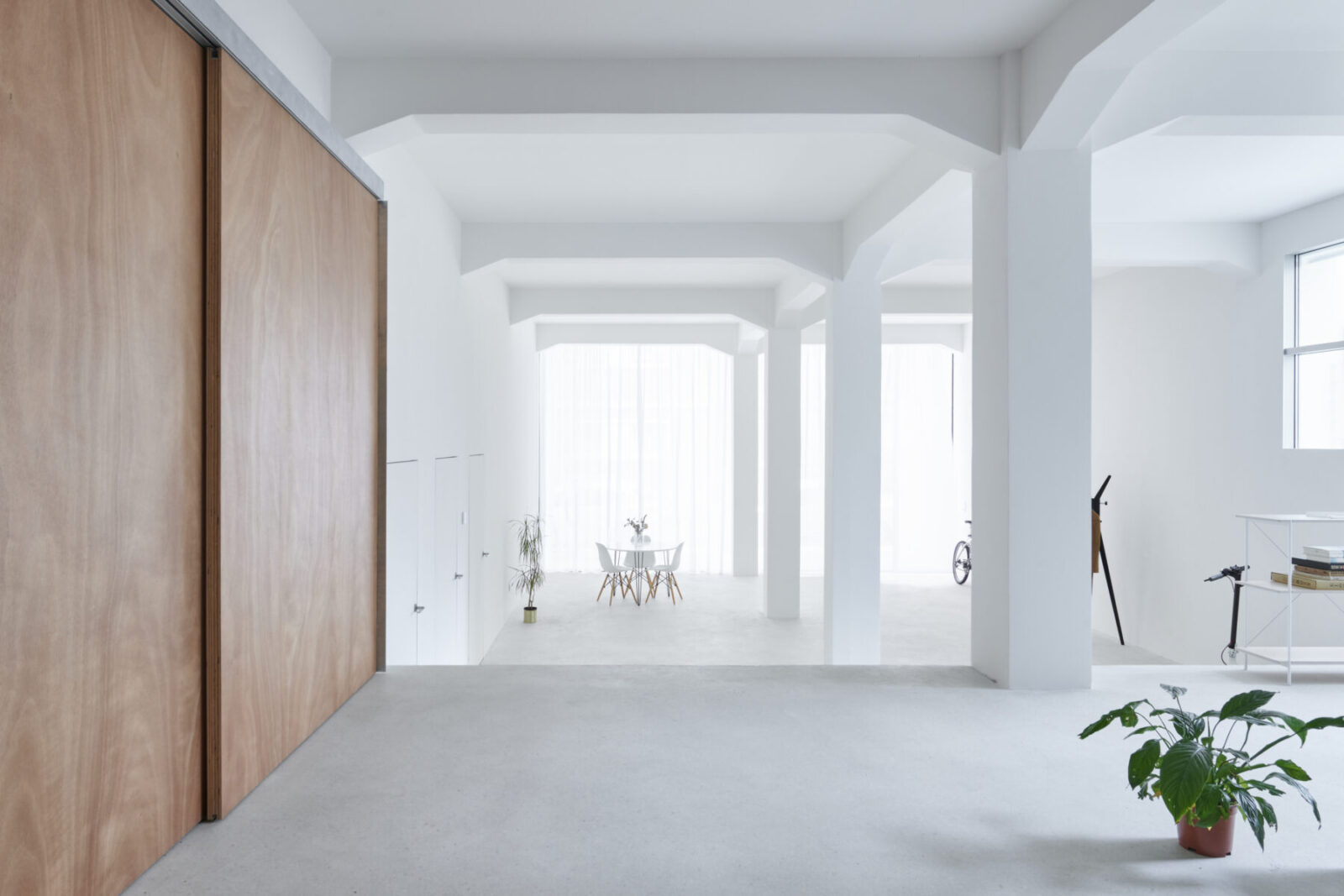 Internally, the project regularises the floor plan by creating a main central space and compacting all the installations and storage spaces in the remaining adjacent surface. Thus, this central space is understood as a great white stage in which, thanks to the introduction of a new structure that is anchored to the existing pillars, a podium emerges that defines different accessible platforms. Ultimately, the podium ensures that the spatial continuity throughout the loft is kept. Nevertheless, the notion of depth and scale in this abstract space is defined by means of vertical architectonic elements made of okume wood. 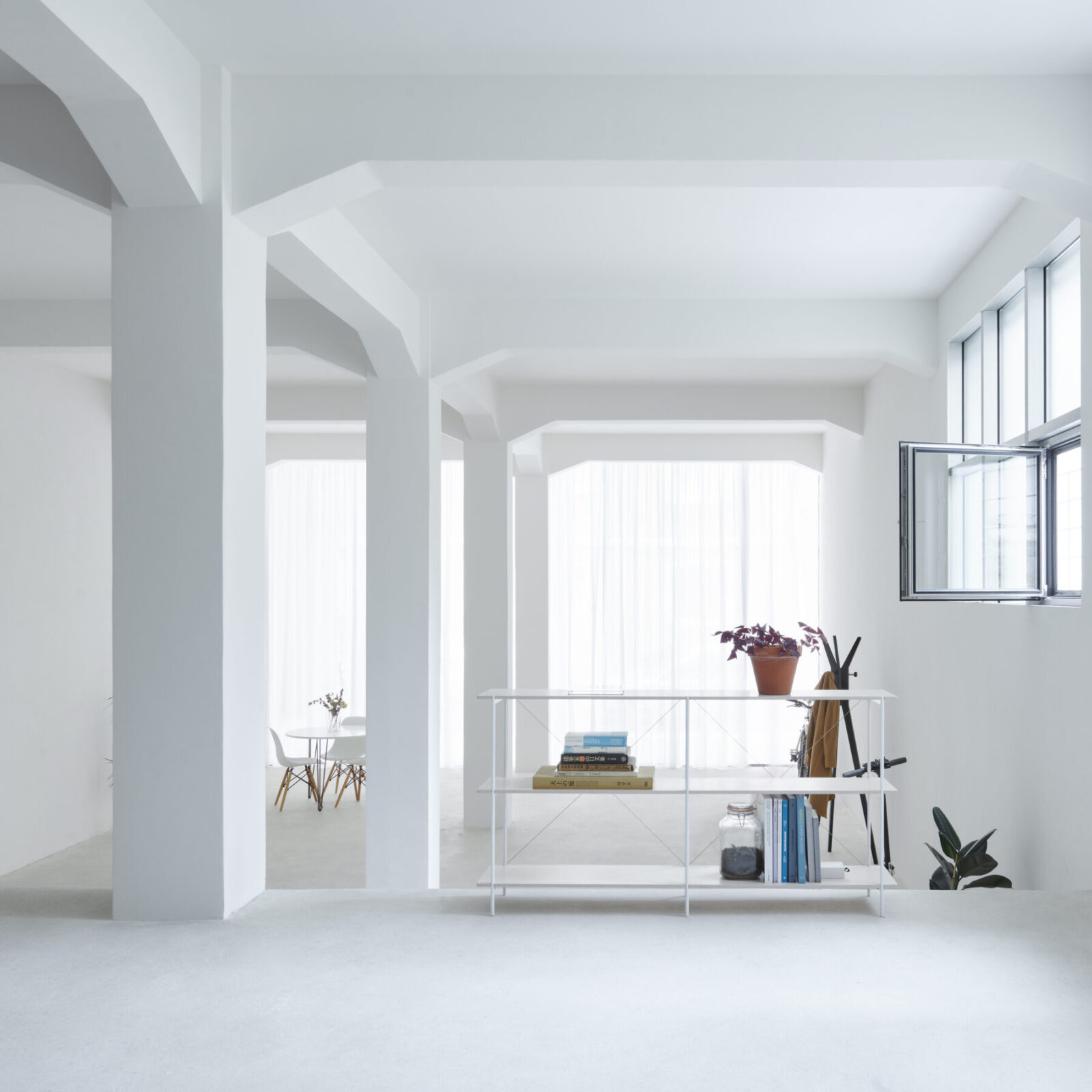 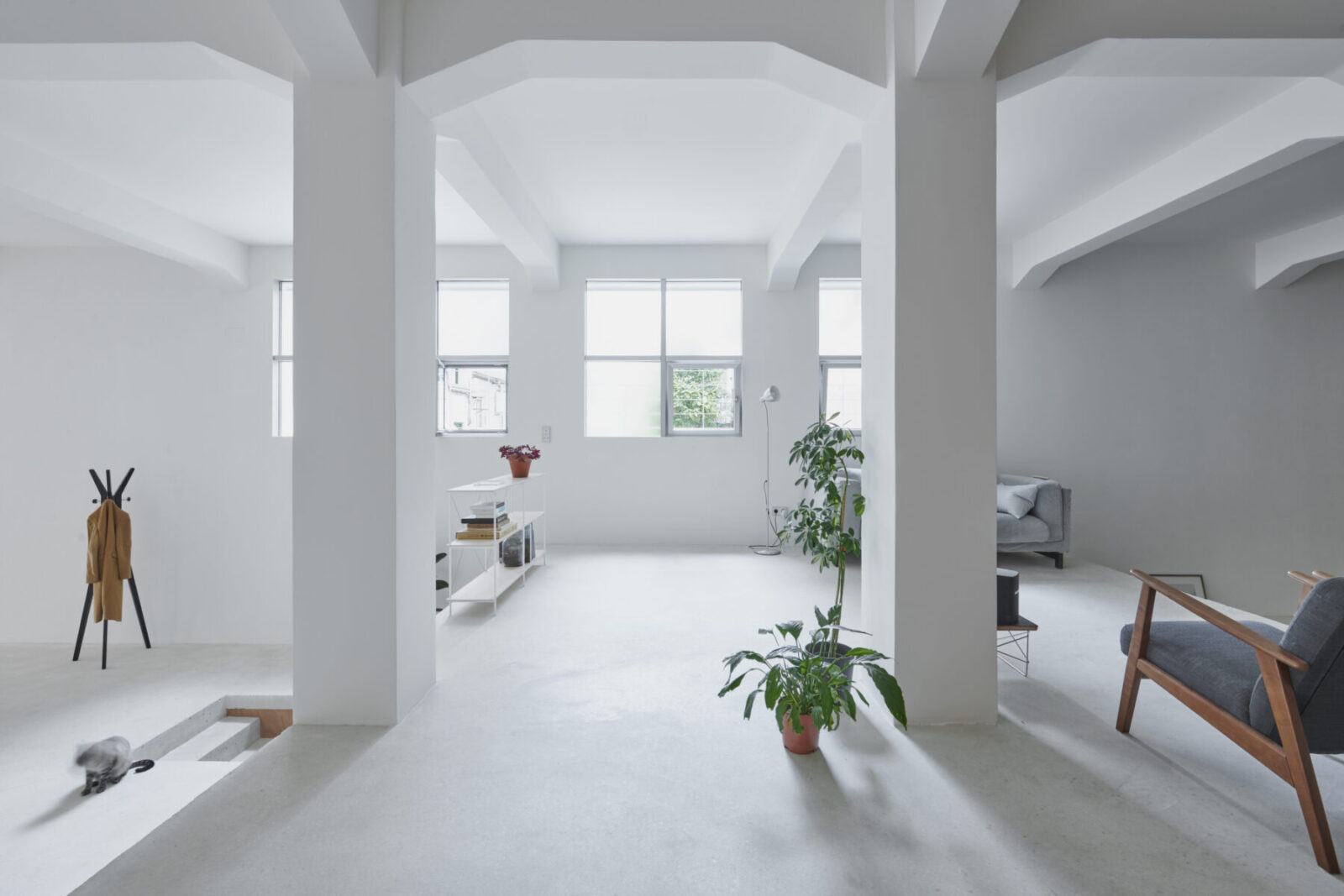 Fixed and mobile planes that allow the kitchen or the bathroom for instance to be placed in such a way that they are concealed but at the same time accessible. In short, the loft is a scenography similar to those proposed by the Swiss architect Adolphe Appia in which the new space under the podium is transformed into a working space, a domestic stage pit. This space, unlike the rest of the loft, is defined by concrete walls and the existing foundations of the building, thus being a continuation of the ground plane. 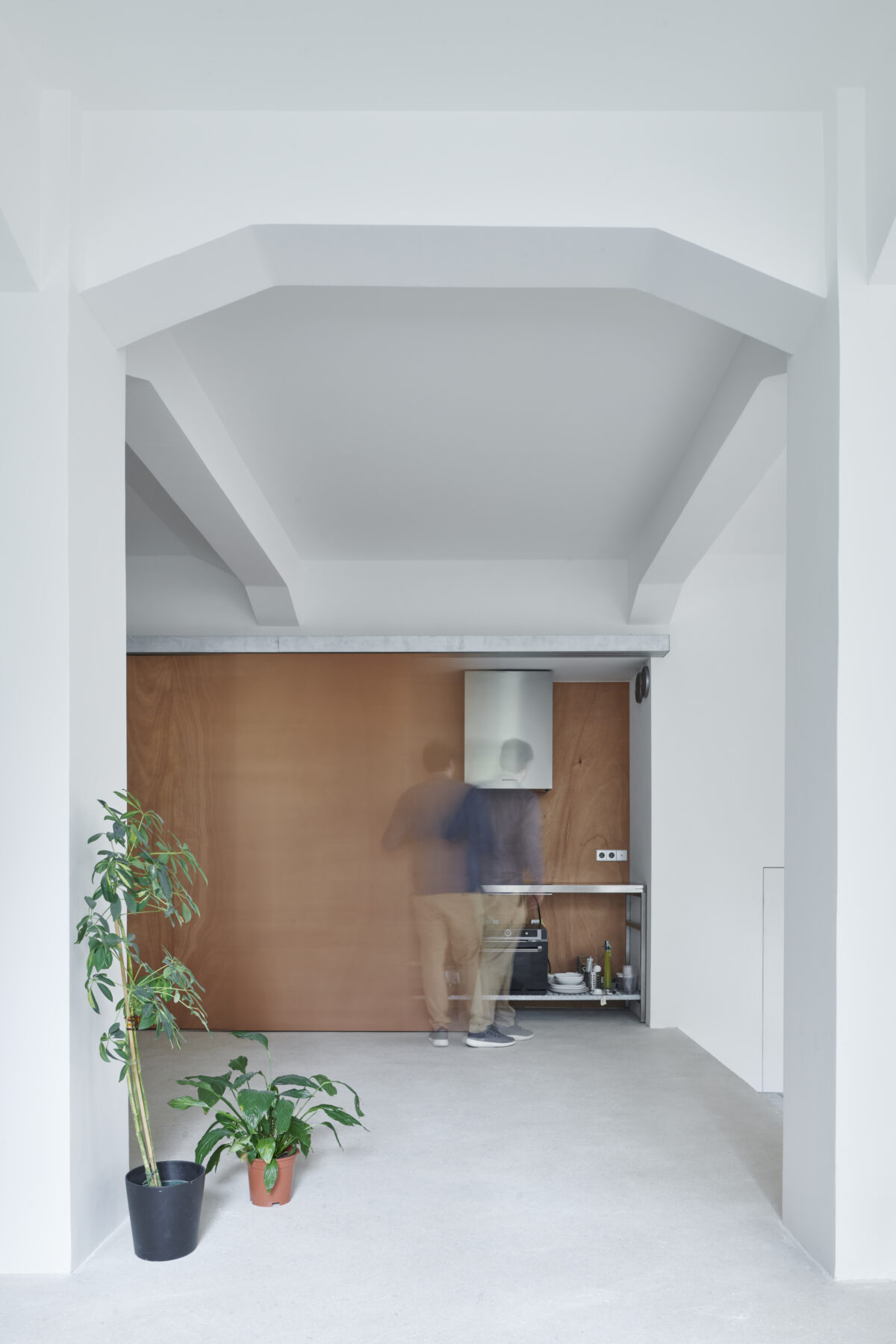 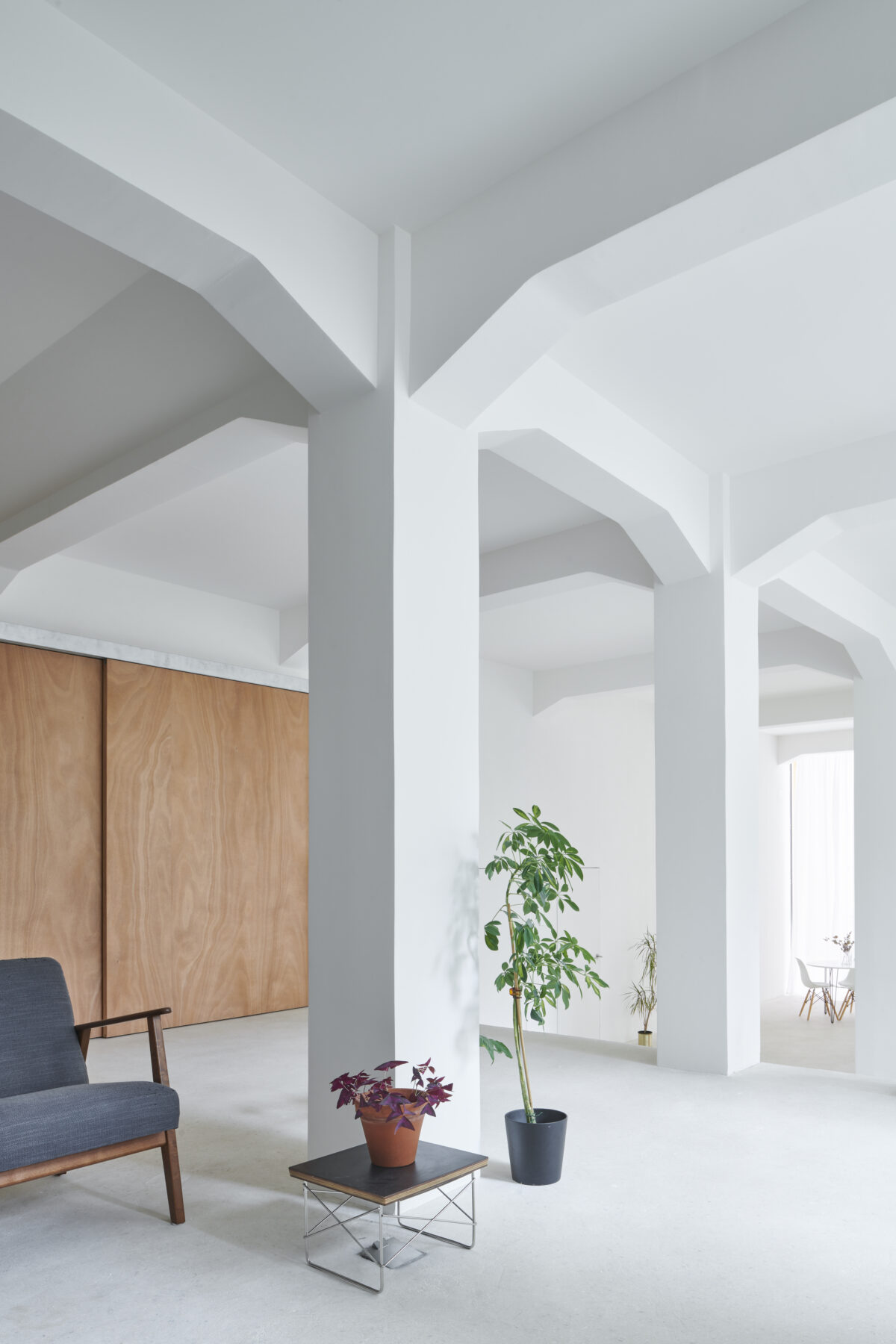 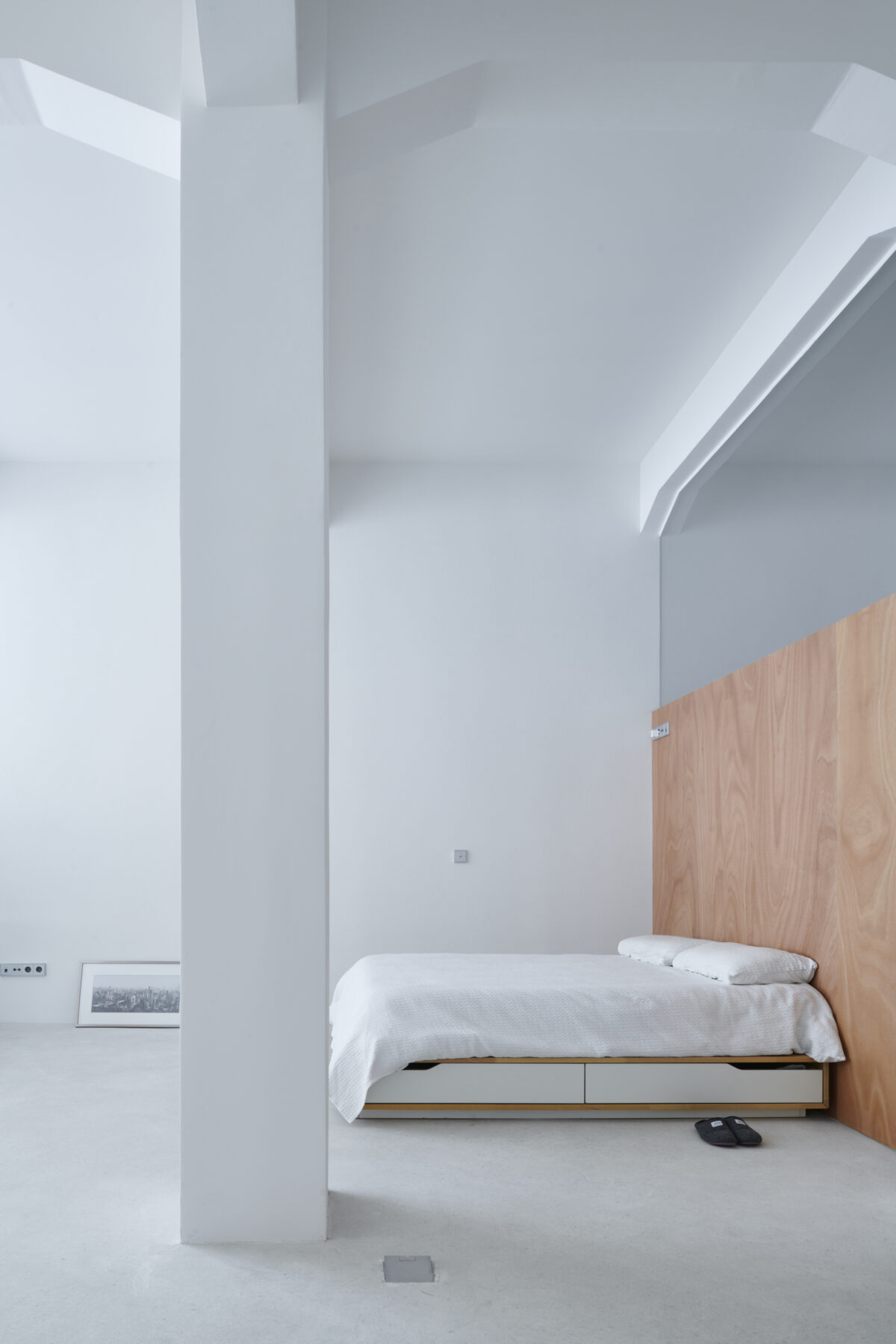 The deliberate predefinition of this space with a specific use and materiality frees the rest of the platforms from a specific function, thus giving the dwelling a great deal of flexibility in which each accessible space can accommodate any activity. 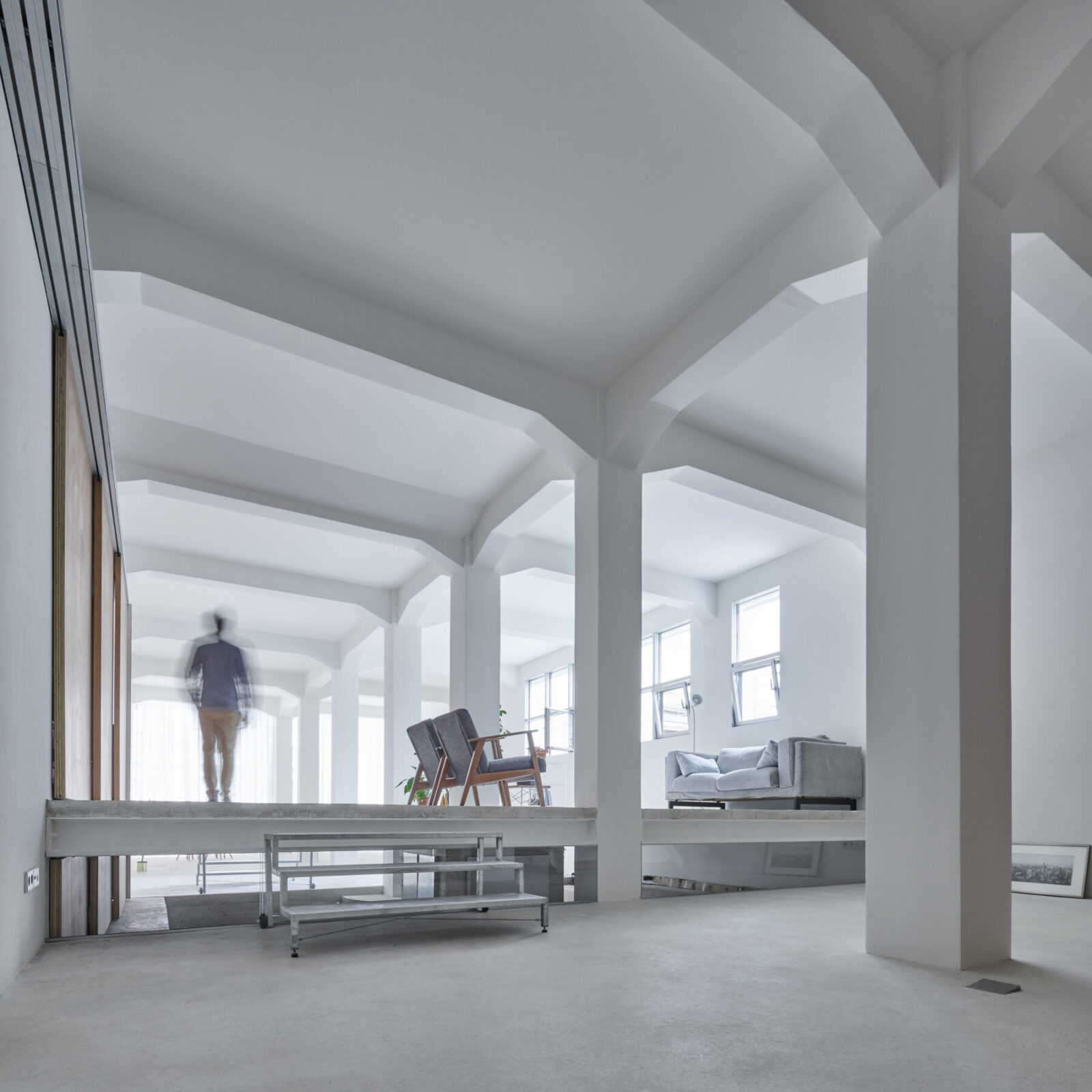 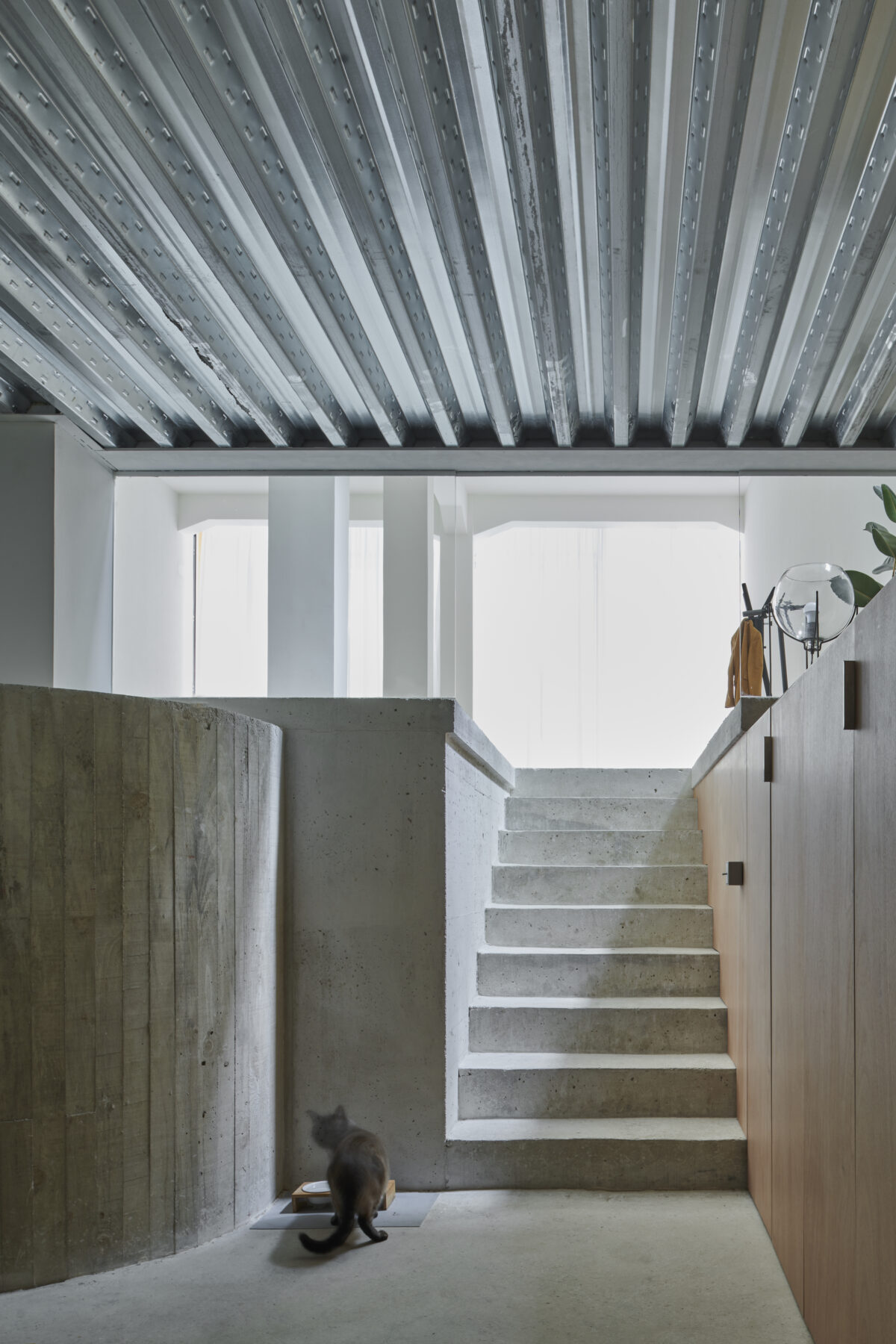 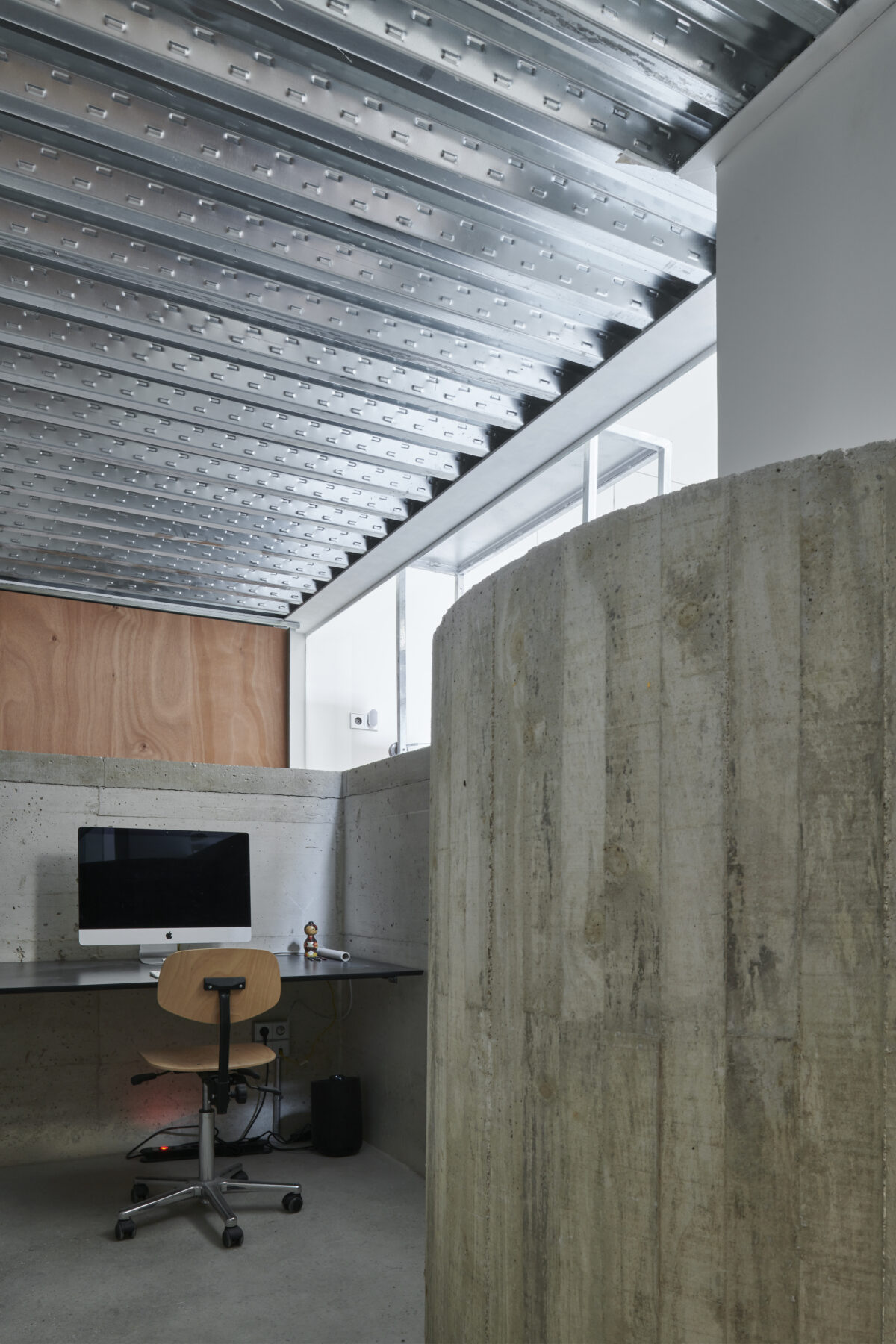 In addition, and to further enhance the flexibility of use, the staircases act as furniture that can be repositioned at will, thus introducing multiple routes and internal configurations. This strategy of undefined spaces is what allows the user to appropriate the space according to their needs, since, after all, a loft must be, as its etymology indicates, an open place, a timeless place in which to live and work in a flexible manner. 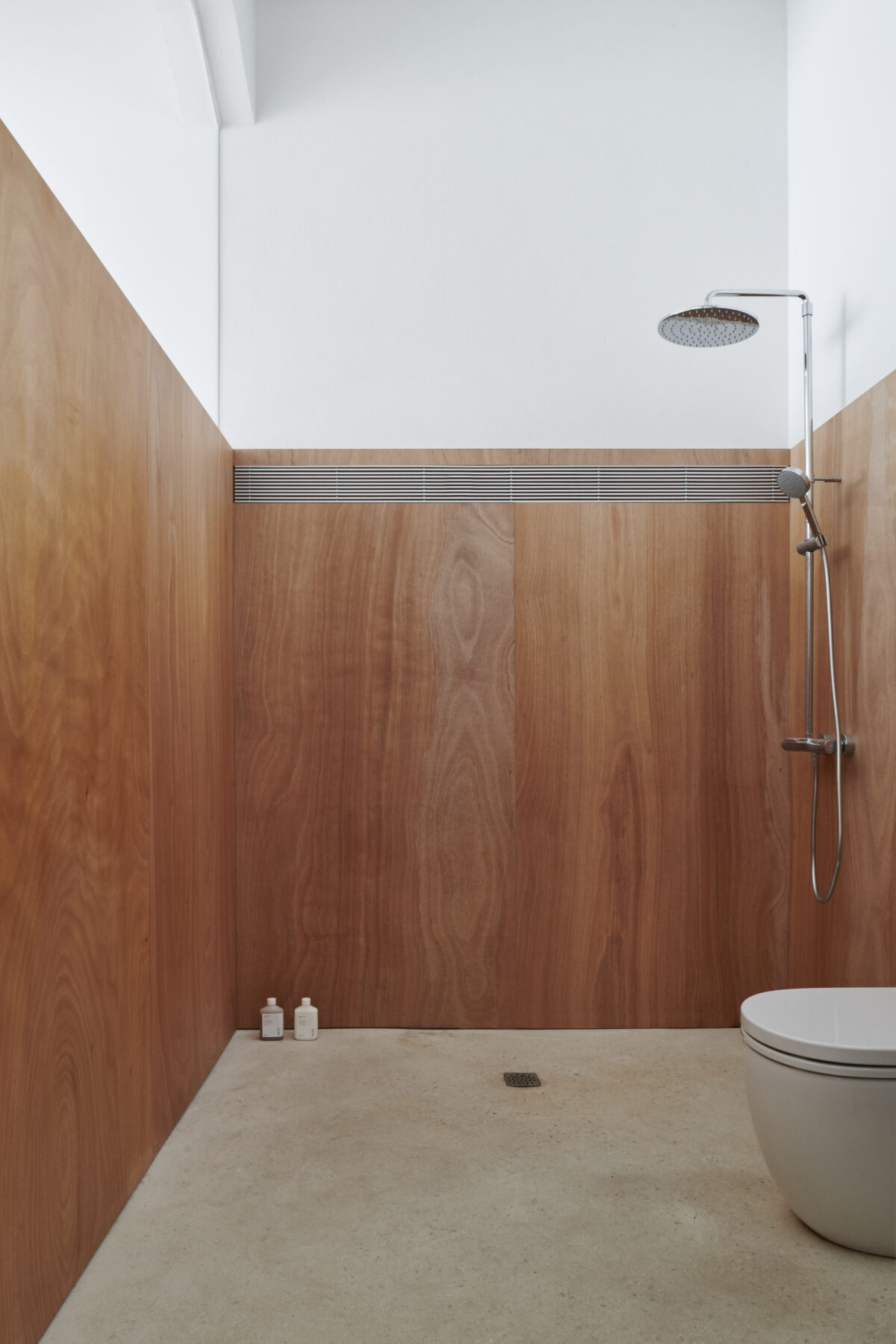 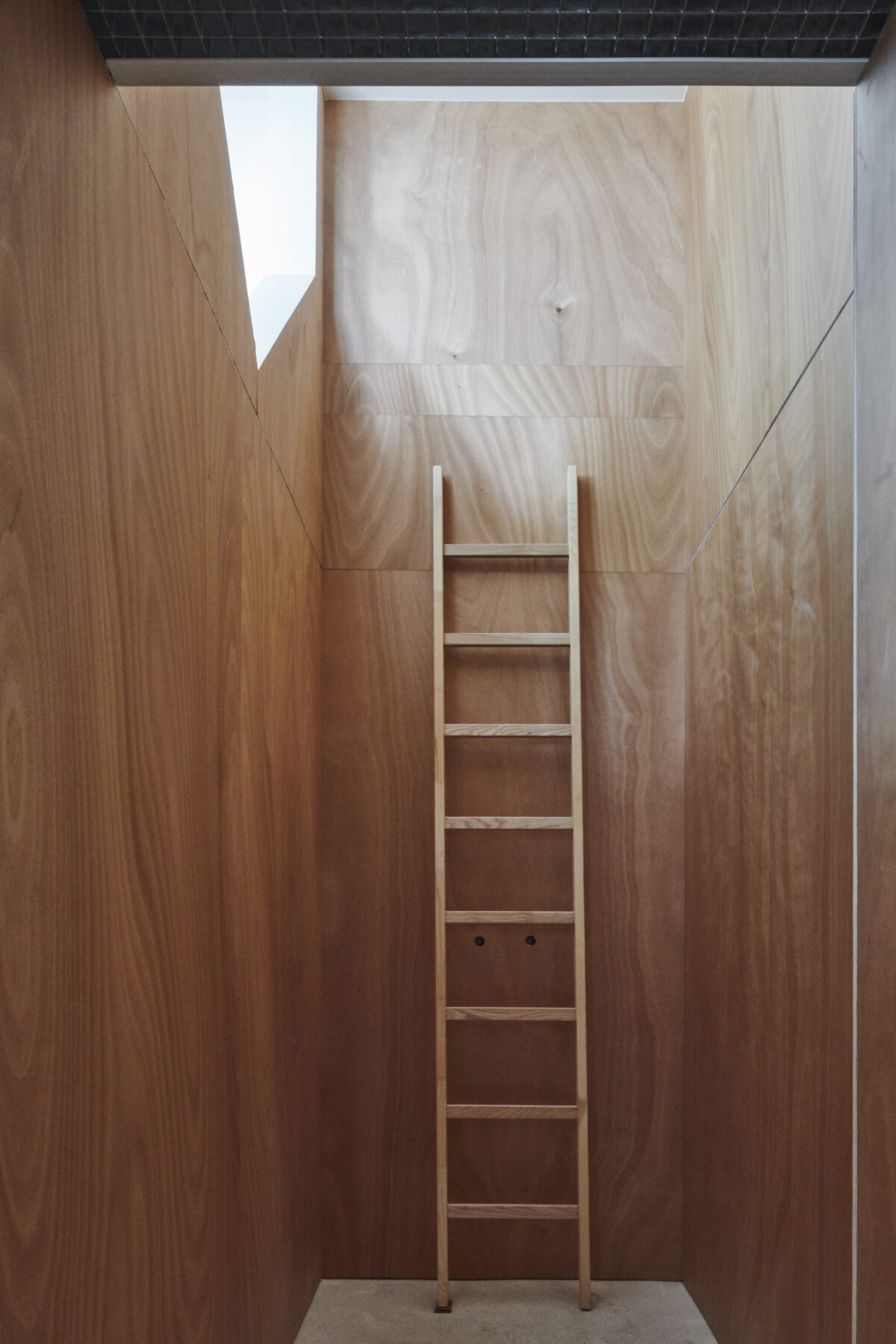 Constraints transformed into architectural forms. a r r o v a is committed to confront idealism with an inventory of realities trough narrative and analysis to form increasingly measured relationships between spaces and architectural typologies.

Studies in Architecture at the University of Navarra ETSAUN. Collaborated with his Third-Year-Studio Professors alcolea+tarrago in 2010-2011. Postgraduate Master at the Sheffield School of Architecture SSoA after the submission and approval of his dissertation Roof as Duality of Meaning tutored by Prof. Peter Blundell Jones. Was granted a Leonardo Scholarship in 2013, moving to Switzerland to work at office Raumbureau in Zurich between 2013 and 2015. PhD candidate at the ETSAUN with the thesis There and Back of Modern Ideals: European Influences in Japanese Architecture during the Interwar Period, including a Research Stay at the Institute for the History and Theory of Architecture gta Zurich under the supervision of the institution’s director, Prof.Vittorio Magnano Lampugnani. Established a r r o v a in 2018 with Cristina Vergara with offices both in Pamplona and Zurich.

Studies in Architecture at the University of Navarra ETSAUN. During her student period, she collaborated with IDOM in 2010-2011. Was granted a scholarship to work outside the EU and moved to Shanghai to integrate in David Chipperfield Architects in 2012 and 2013, participating in competitions and projects such as the JNBY Headquarters in Hangzhou. Changed to Zurich to work for EM2N Architekten from 2013 onwards, designing and executing Heuried Sports Centre also in Zurich, the ongoing Commercial Area in Quartier Heidestrasse in Berlin and Stadtpark Residence in the swiss city of Uster. Established a r r o v a in 2018 with Enrique Rojo with offices both in Pamplona and Zurich, combining the architectural practice with fashion design. 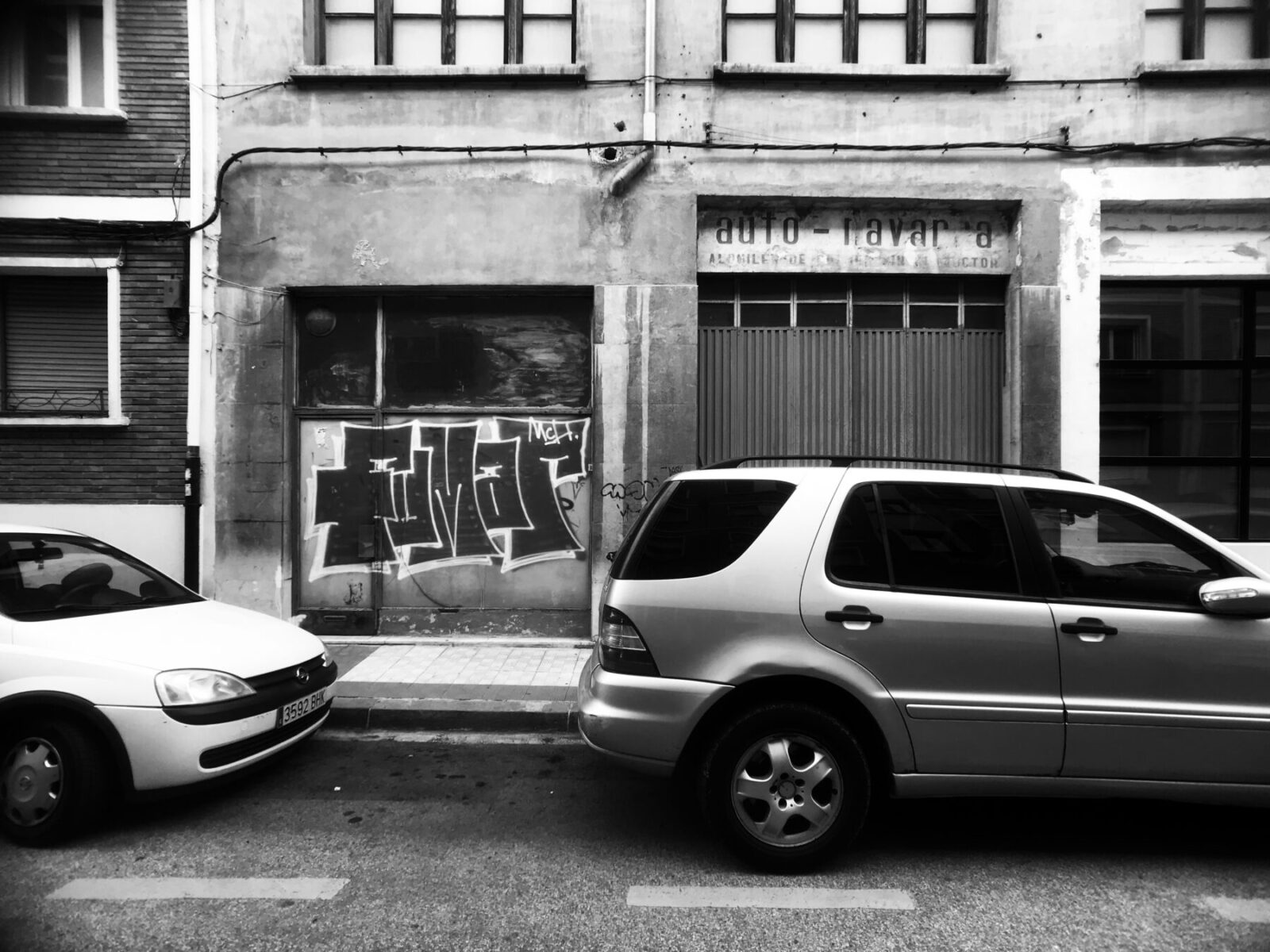 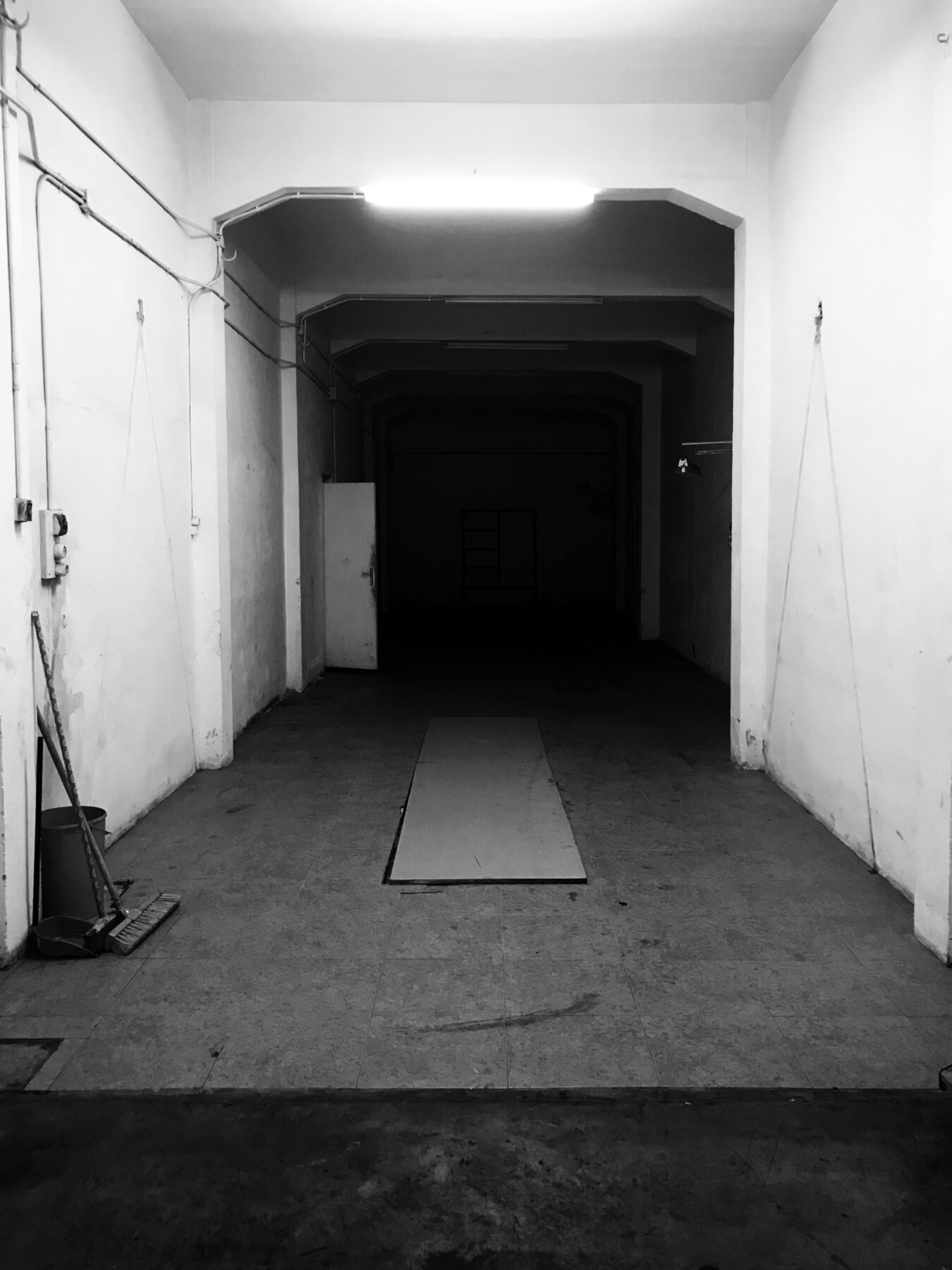 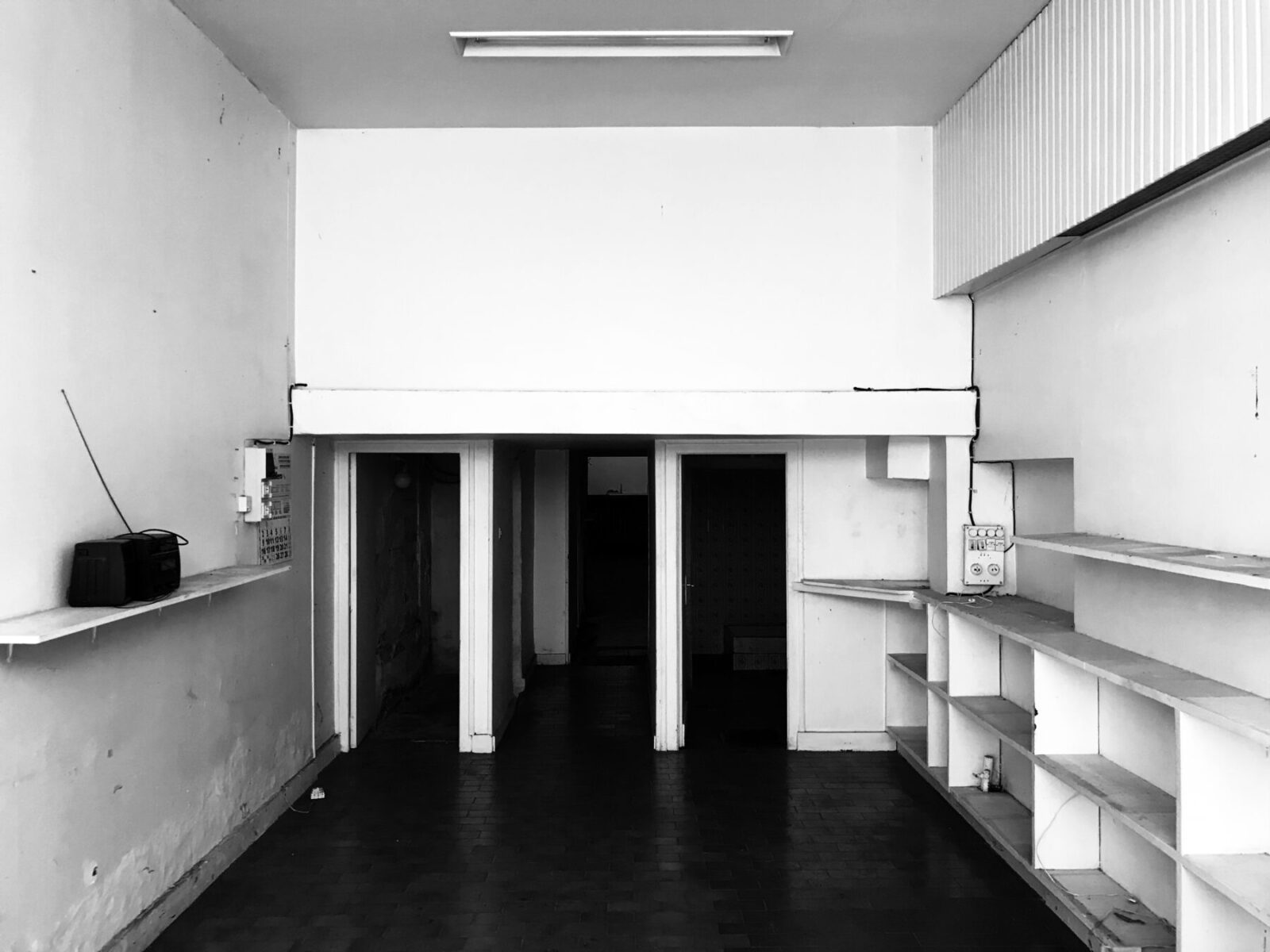