Croxatto & Opazo Arquitectos designed “La Loica” and “La Tagua”, in Matanzas, Chile, named after bird species native to the region.
Both structures are resolved in few square meters, and are built entirely in wood.
The cabins rise in front of the “Lobera”, a large rock mass jutting out of the sea. The design process was conceived as an opportunity for experimentation, looking for a way to both ‘dominate’ the steep slope, and blend-in with the surrounding nature.

This Project was born as a holiday home on the coast. The two cabins for two people each, are located in Matanzas, Navidad, approximately 2 ½ hours from Santiago, Chile. 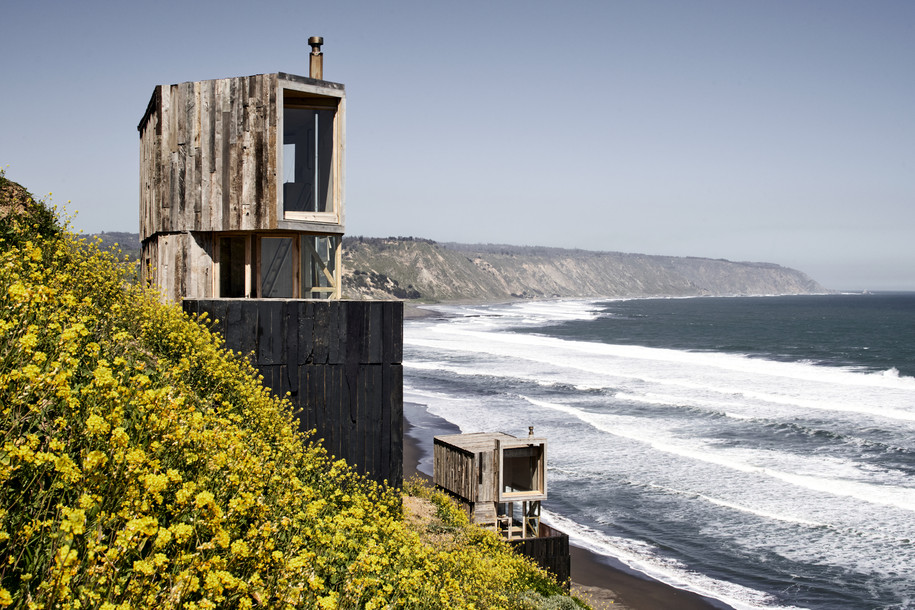 Placed 80 meters above sea level on the Lagunilla hill, the cabins rise in front of the “Lobera”, a large rock mass jutting out of the sea, home to sea lions and other native species. 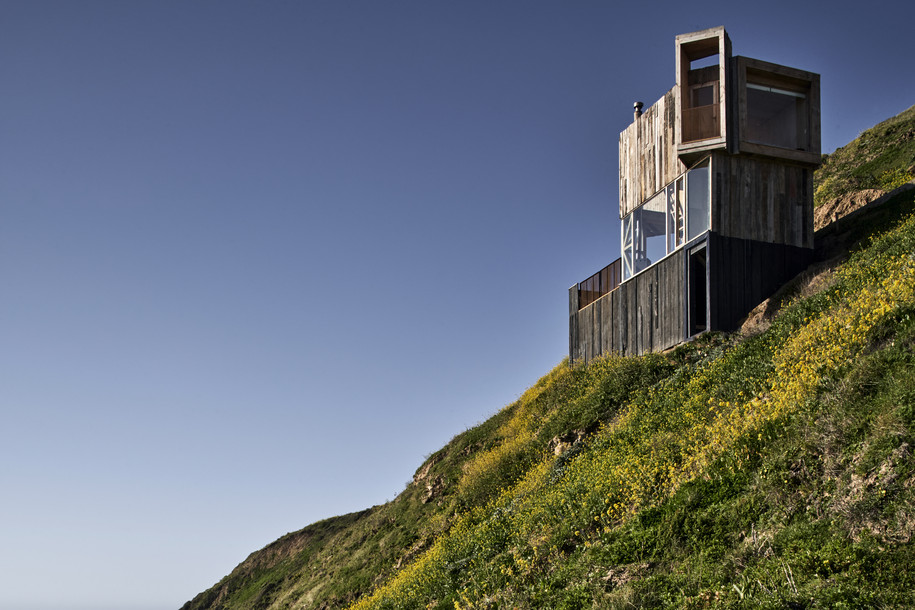 Matanzas has become a world capital for Windsurfing and Kitesurfing, thanks to its outstanding wind and wave conditions. Both these elements were purposefully incorporated into the development of the project. 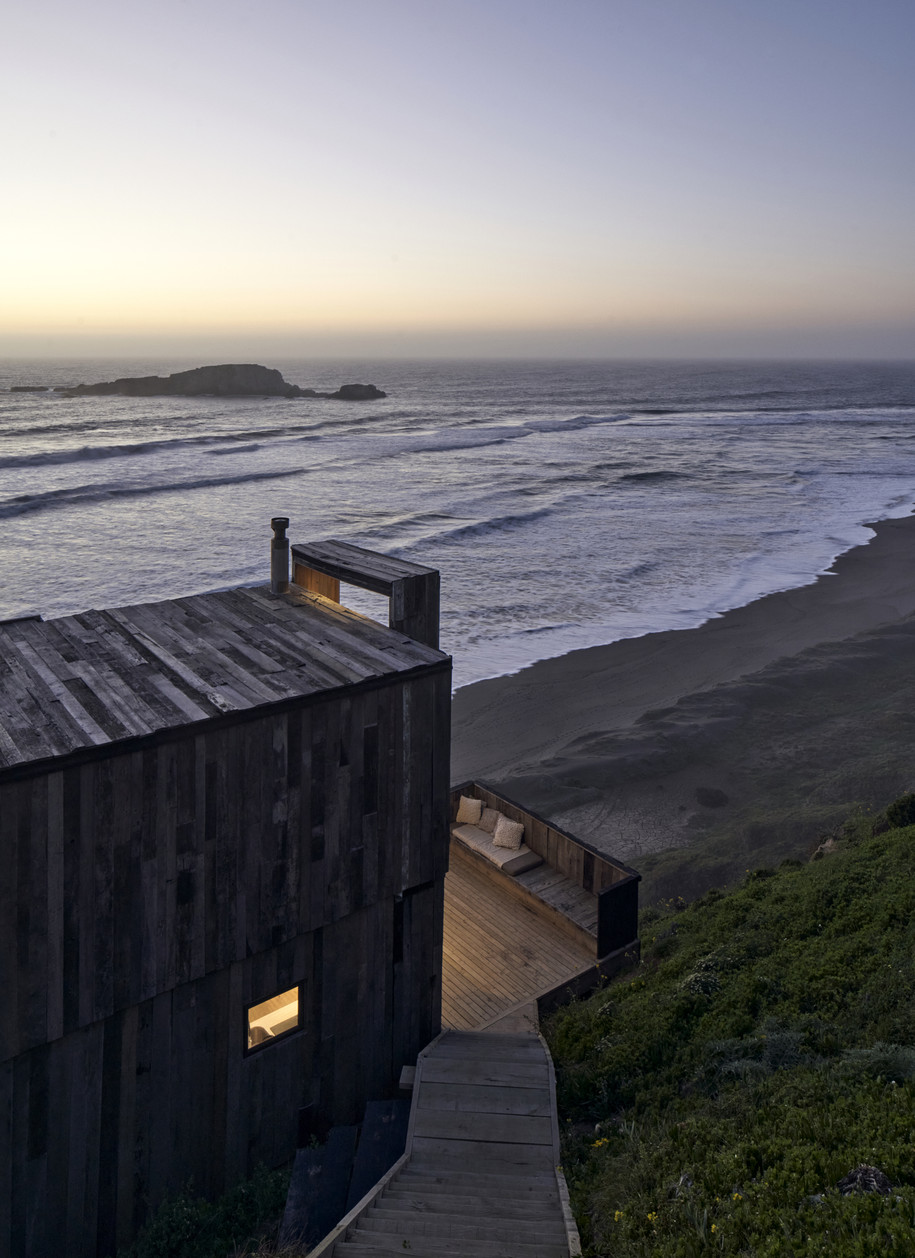 The design process was conceived as an opportunity for experimentation, looking for a way to both ‘dominate’ the steep slope, and blend-in with the surrounding nature. “La Loica” & “La Tagua”, both named after bird species native to the region.

They are placed on the ravine using a wooden pilon structure that supports the main platform, over which the programmes developed. 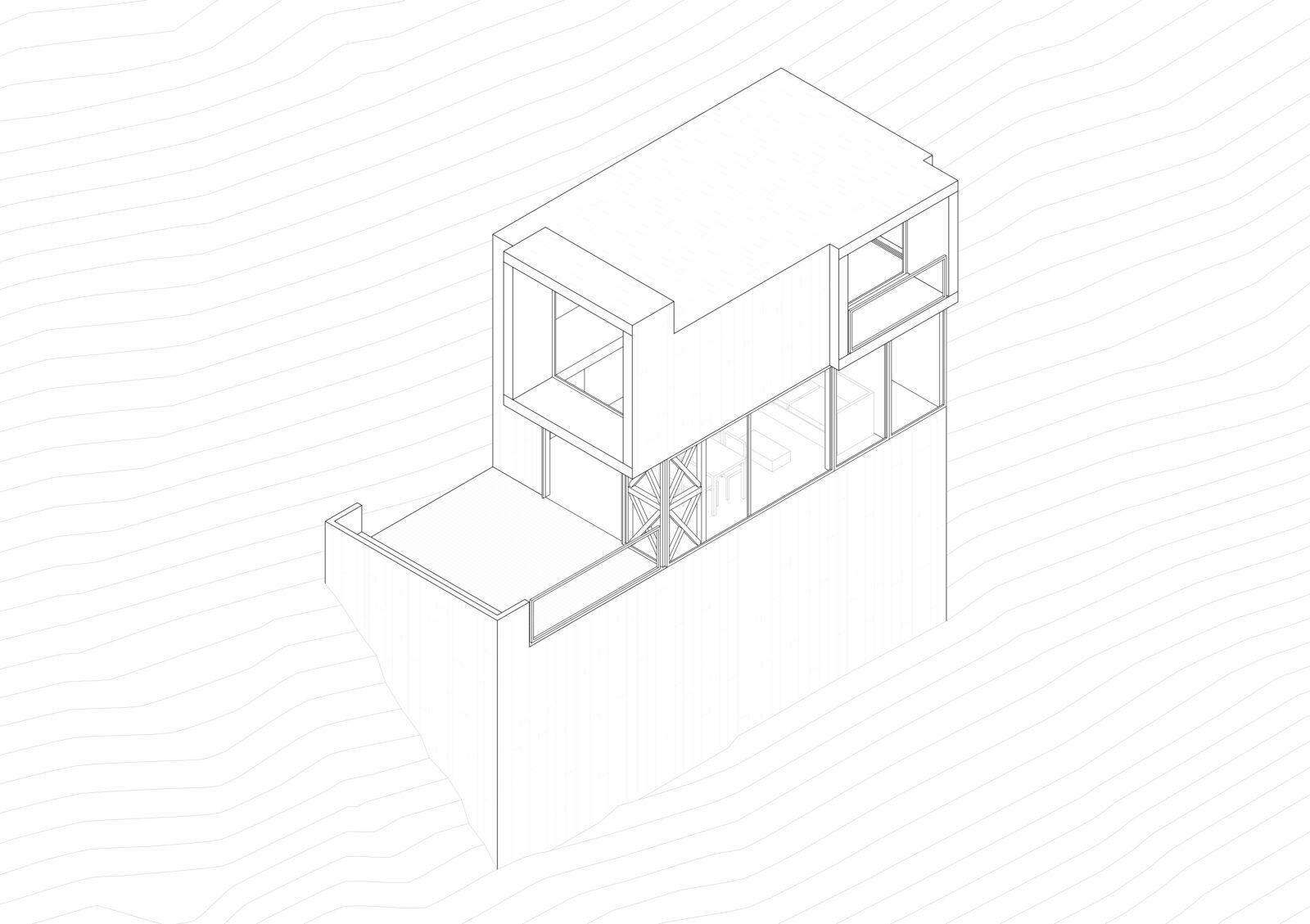 A large loft connects the interior premises both visually and spatially.

The dining room, bathroom and kitchen are laid out, on the access level, using furniture that merges with the architecture, to optimize space. 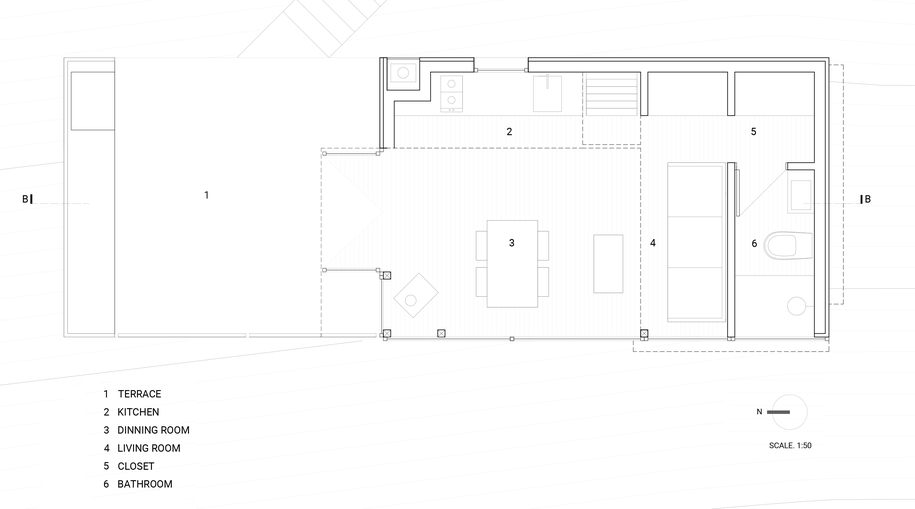 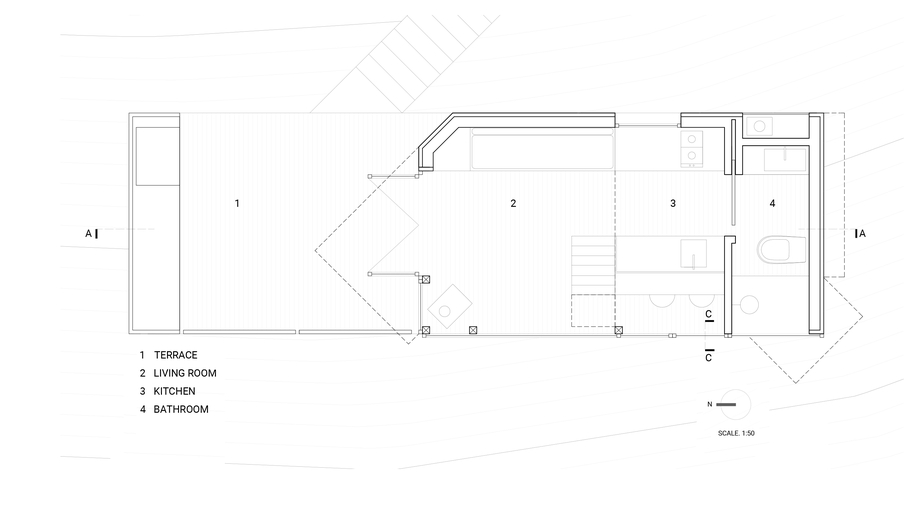 Large windows are mounted on the western façades, enhancing the feeling of ‘hovering’ over the ocean, dominating the horizon. 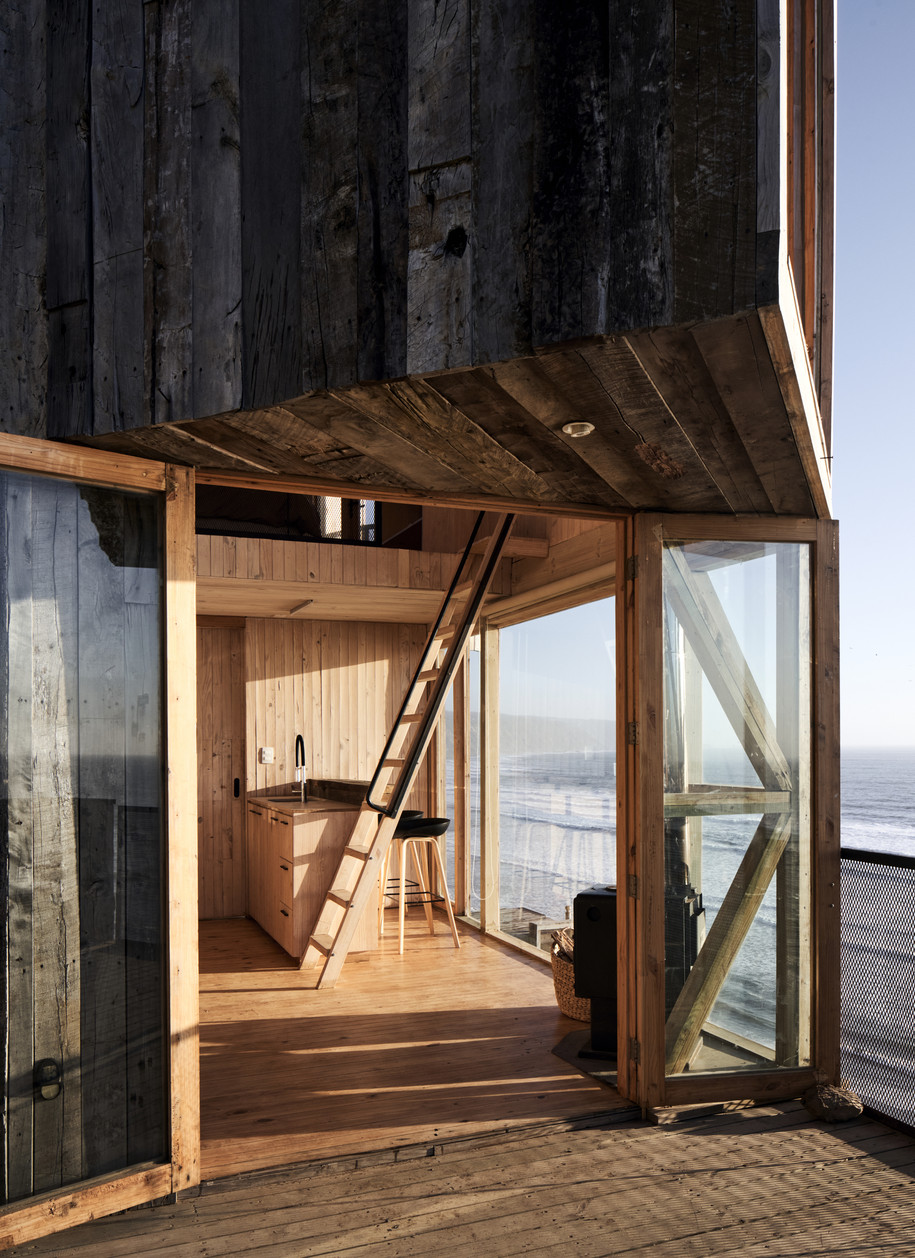 In both cabins the master bedroom is located on the upper level and can be accessed using a vertical ladder. 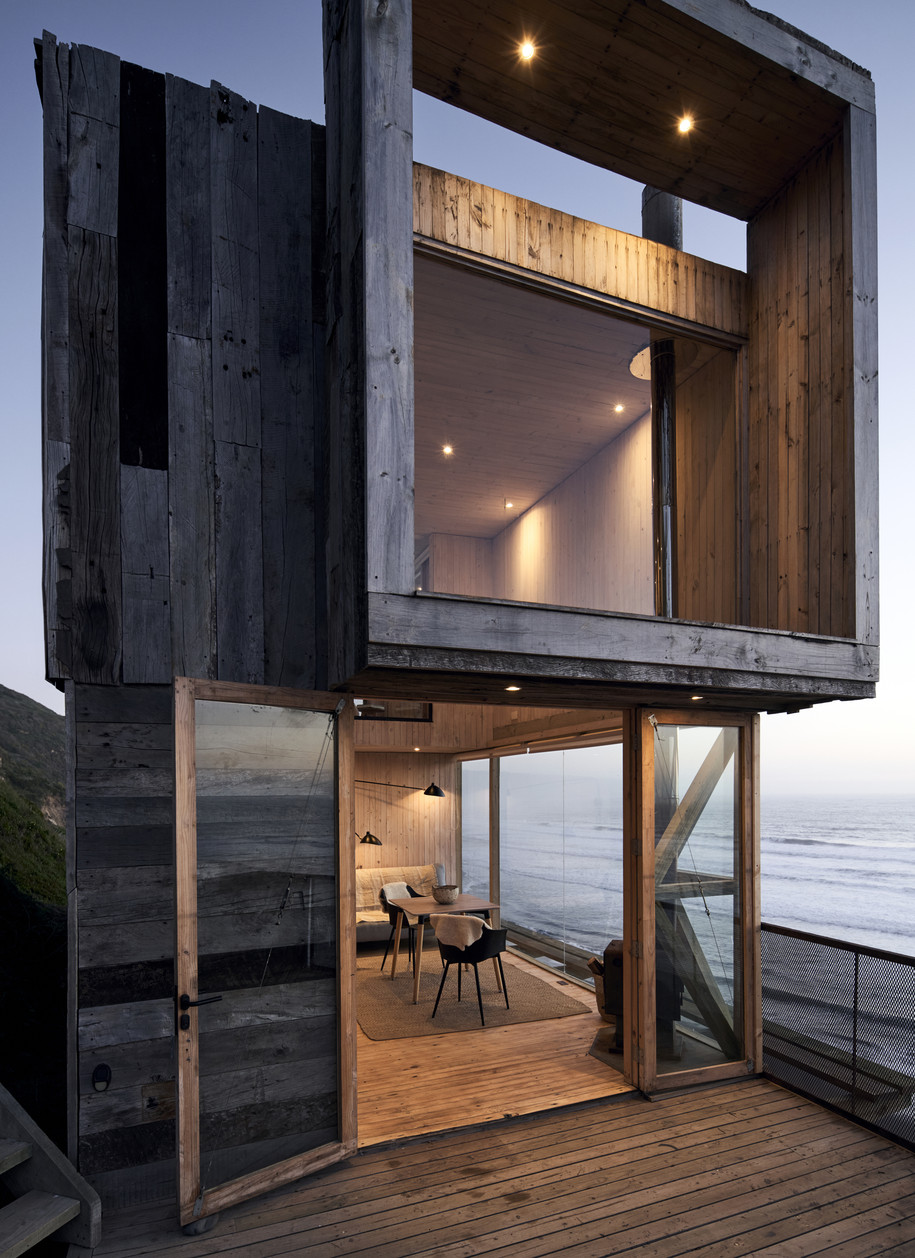 The bedroom is connected with the rest of the space throughthe double-height living room, a disposition that seeks to frame and direct the view, pointing towards the wooded hills to the south, and the rocky “Lobera” to the north. The access doors on each cabin can be opened wide into the northern façade terraces, as a way to connect and interact with the exterior, and ultimately extend the interior spaces. 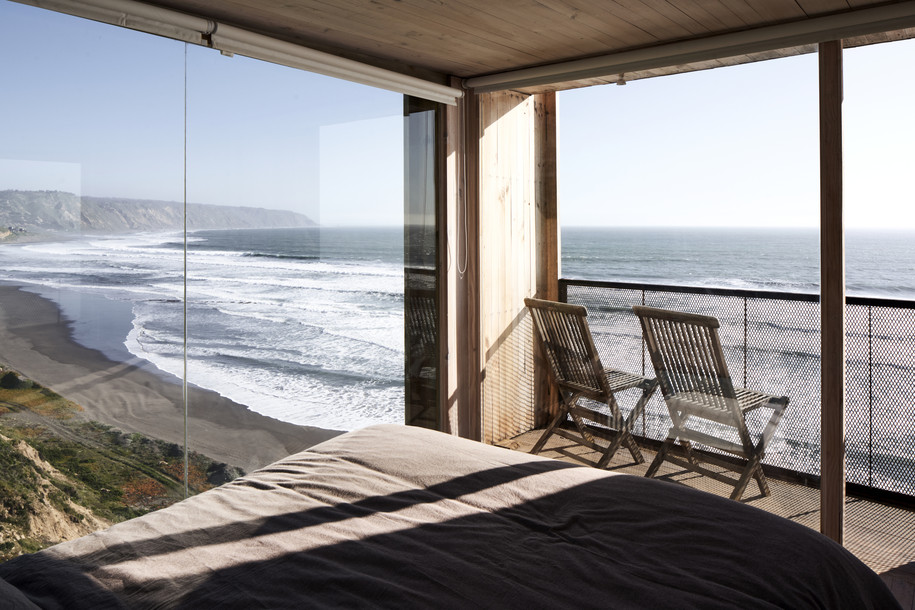 This also allows the main structure to act as a shield against the strong winds coming from the south-west, consolidating the terrace viewpoint.

Both buildings
are built entirely in wood

Both buildings are built entirely in wood, using impregnated, chamber-dried pine on the main structures to improve long-term performance. 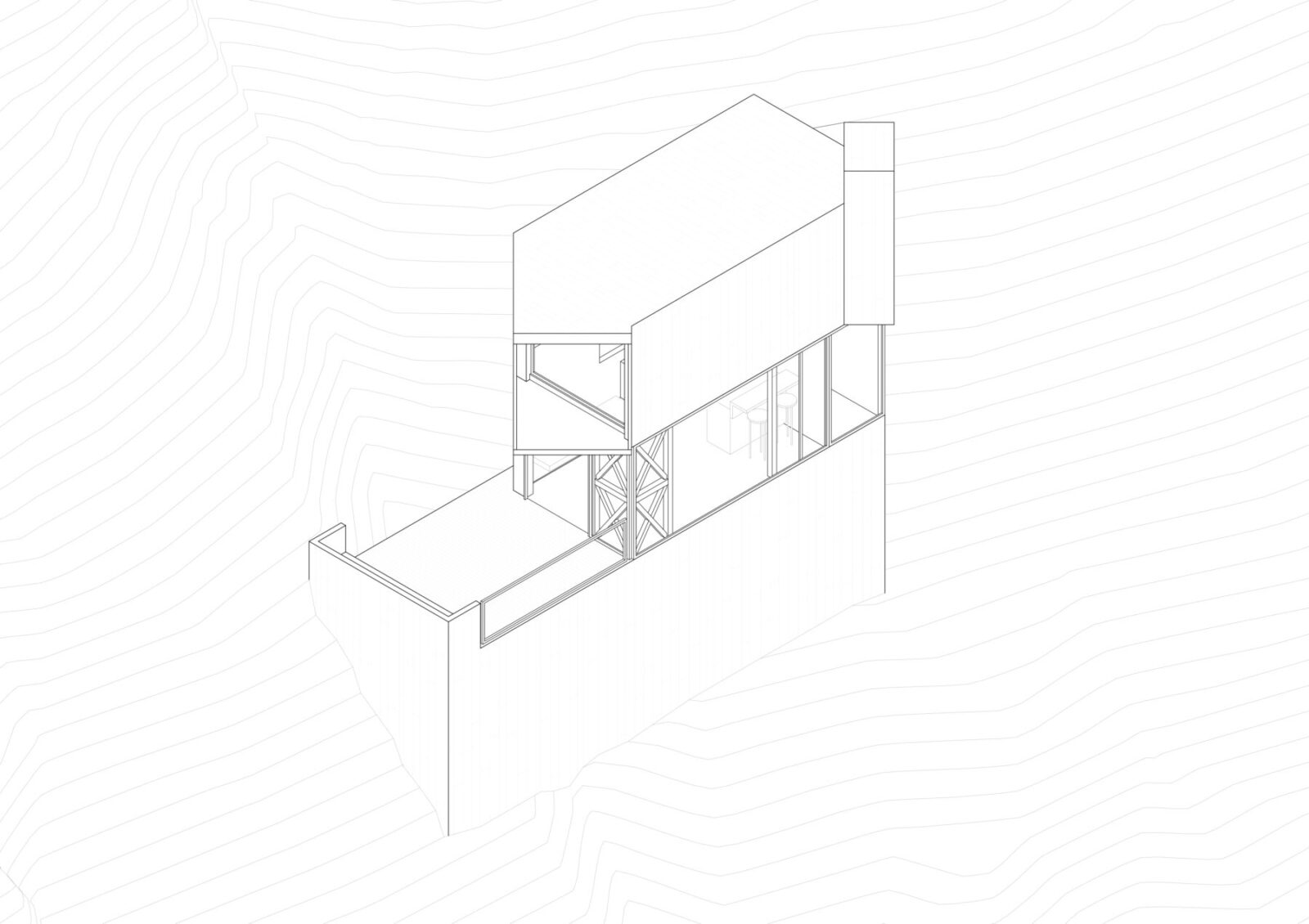 For the interior finish, pine board was used, and the exterior timber cladding was manufactured from reclaimed oak sleepers. 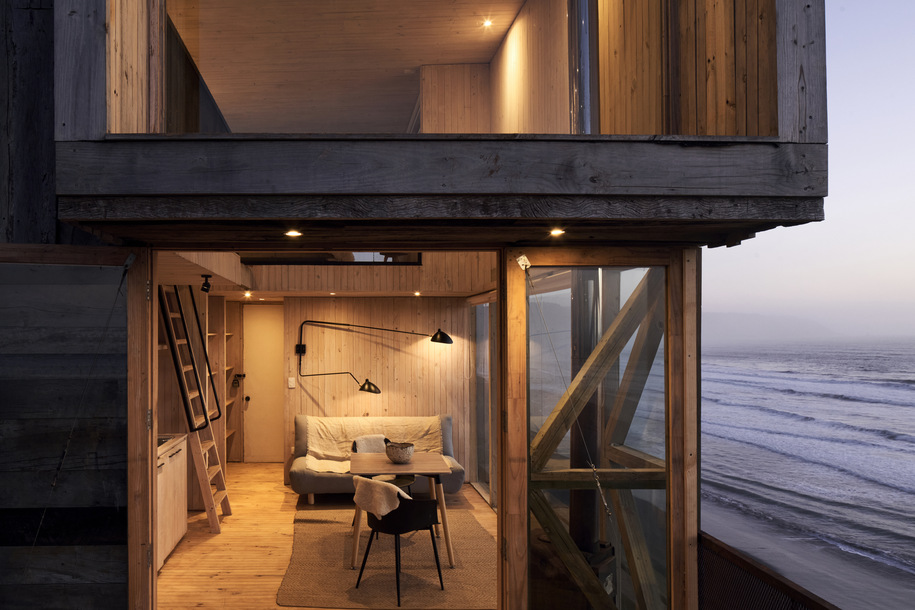 This inert material was treated with petroleum oils, which provides stability and resistance against marine corrosion, and gives it a look that blends-in with the landscape. 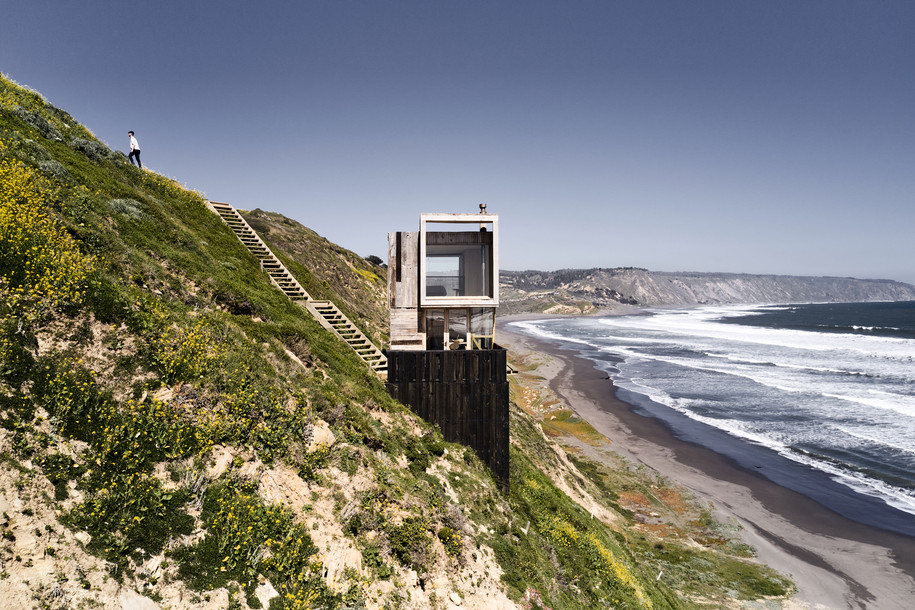