Atelier Data architects team took over the design of a residence in Portugal, titled Casa Mãe. The goal of the project was to redevelop a former agricultural property, located in Alcácer do Sal, Portugal. The project is based on two axes. The first one is the reinterpretation of the manorial character of the building, through the succession of the exterior spaces, and the simplicity of the facade. The second one is the construction of a new volume on the southeast side that allows the interiors to reorganize.

Following on from the conversion of a horse barn into a residence in 2012, the Casa Mãe project is the second phase of the strategy that aims to redevelop the “Sítio da Lezíria” – a former agricultural property in Alcácer do Sal.

Based on a logic that intends to reconcile the rehabilitation and the recovery of the existing construction by adapting it to new functions and by introducing a new body in the continuity of the existing, the project merges two temporal periods into one – superimposing new spatialities, materialities, and identities.

The project‘s development is thus based on two fundamental axes:

Firstly, rehabilitation and restoration are seen a way of reinterpreting the manorial character of the building.

This character is revealed by the succession of exterior spaces and platforms that lead to the entrance of the house, the simplicity of the façades composed with the rhythm of the openings, the continuous communication between the compartments in the interior, the presence of large chimneys, the high ceiling that the project highlights.

Secondly, the construction of a new volume closes the southeast side of the building – where clandestine volumes were located – and allows new distribution and organization of the interiors.

From a programmatic point of view, the distribution of the spaces takes into consideration the wooden structure and its metrics and is based on the following principles:

The kitchen and dining room represent the core of the house and it is formed by the large space that the remaining rooms derive.

The social and agglutinating character of this space is reinforced by its interior volume and the extension of the living and dining area to the exterior, through the incorporation of a pergola to the southwest, which promotes the relationship between the building and the landscape.

The entrance hall is located on the north-facing façade, as well as the services core and support areas: social bathroom, laundry and storage. The area that accommodates the two bedrooms is located at the new volume and it is organized around two patios. The bathrooms are organized, allowing to endow each of the suites with a private outdoor space.

The intervention recovers traditional construction techniques and materials such as clay, used in the roof and floor. Lime, applied in the exterior walls; hydraulic mosaic, to demarcate some of the spaces of an exceptional and transitory character. Wood, already existing and recovered on the floor of the large living room – the room that went through less intervention.

As an element of the composition of the new volume, the design of the porous element (cobogó type) used on the southeast façade of the building was explored in order to allow a dynamic between light and shade that brings life to the courtyards and adjoining spaces inside. 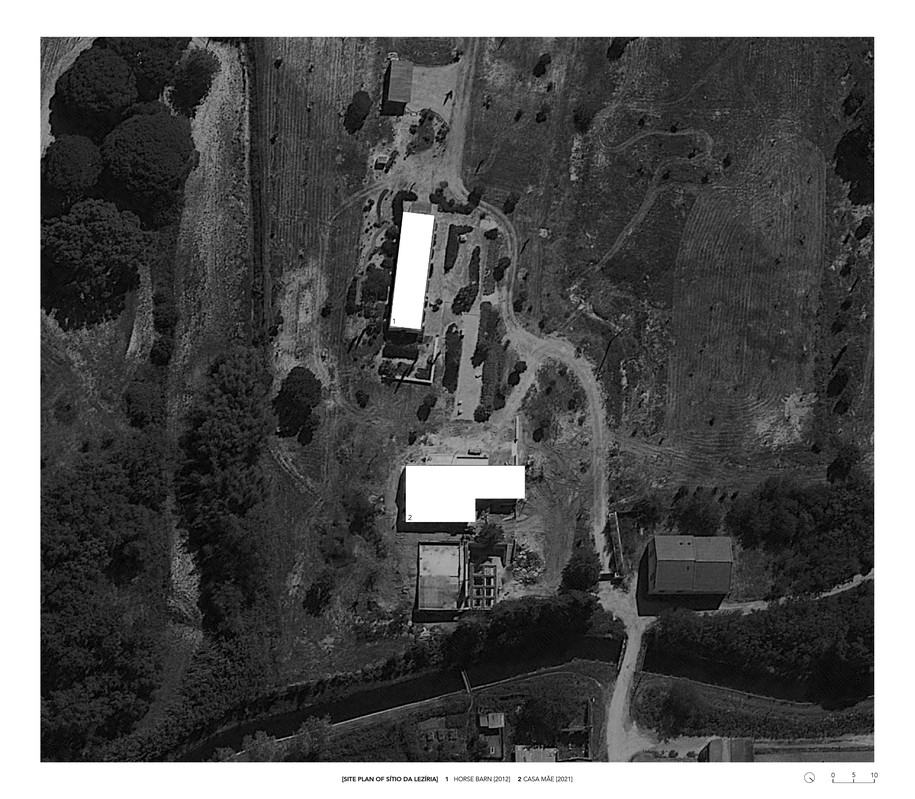