“Building bridges”, a competition entry for the New Headquarters of the Ministry of Infrastructure in Athens by Th. Athanasopoulos, A. Dimitrakopoulos, M. Galani, S. Kapsaski, arises as a motto acting tentatively as the project statement, thus reflecting the nodal role and significance of a ministry serving political and economic development in Greece.

The structural and formal scheme emphasizes a suspension superstructure with visually prominent exoskeletal lattice webbing. The imposing upper volumes are systematically supported by axially set, centrally located and hidden from view structural and service cores that transfer loads while hosting the circulation system – elevators and stairs. The main workspaces of the ministry appear thus as hovering above a perforated ring shaped as to emphasize site geometries.

While the totalizing architectonic intention is served without compromises, the project displays a very rational organization optimizing services and offering a systematic structural approach. Each service core contains adequate service shafts/cavities for prime quality office space. An imposing scale of the pure solids is here reversed by a series of conditioned layers allowing opacity and permeability.

The serially pierced perimeter with its overlaid continuous band of programmable space offers the duality of acting at the street scale on-ground and as a landmark at greater scale beyond. For pedestrians, the massing scheme enables an outward terrain, while acting as a hugging introverted enclosure. The punctured background the upper ‘ring’ of volumes enables for a vibrant urbanity on the raised plinth terrain, a domain of increased activity yet of sheer openness.

The design strategy was a direct – even obvious – response to the context analysis in the macro and micro scale. Immediate planning priorities were set by the city on the development of a transportation hub serving the city of Athens. Meanwhile, its implementation has been held, reflecting the economic discrepancies and the contradictory programmatic agendas of land owners. The property planning bears the extreme marks of its destination to act as a truck-accessed intermodal node. 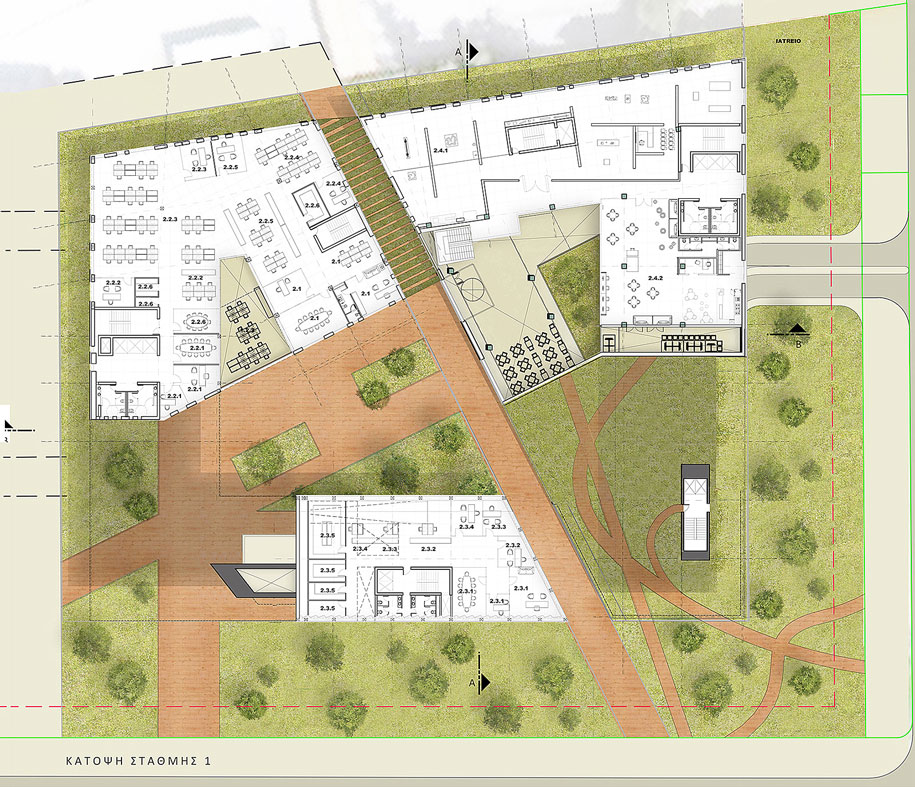 The planar scheme is divided in two independent entities due to siting restrictions imposed by the city planning department.  An L-shaped wing and a C-shaped form are interlinked at ground level with a perforated planted pergola and are programmatically connected only through the underground programmatic zones – archives and parking garage floors.

Three main entryways and lobbies serving the entire complex are positioned in direct contact with the central outdoor court. All programmatic entities are organized around this large central public space, readily accessible from adjacent streets. By lifting the workspace on pilotis that expand along the Piraeus Street frontage, all unbuilt ground-level zones of the outer perimeter are visually extended as to merge with the inner court, thus creating a single public-access destination. This network of outdoor spaces is animated and enhanced by a sloping roof-garden or ‘ascending park’ created at the northeast side of the site, also directly accessible from Piraeus Street.

Τhe planted tilting slab shelters public gathering areas extended on two levels, setting an identity for the northern L-shaped building. A conference center, including an amphitheater and the multipurpose hall, a restaurant, doctor’s office, the main foyer and reception area are located here with the vertical circulation hub leading to an upper level of the Museum of Technology and kindergarten. At the 3rd floor the pilotis open to the outdoors at great extent, while limited enclosed spaces at this level accommodate independent departments and offices. The 4th floor of the C-shaped building includes the General Directorate of Natural Disaster Impact Rehabilitation, while at the 5th and 6th levels are occupied by the Unit Hydraulic, Port & Building Infrastructure. The southern C-shaped volume hosts the General Secretariat for Infrastructure at ground level, which extends to the 2nd and 3rd levels. Towards Piraeus Street, the small section of the G.G. Infrastructure is located. The upper sections of the building, 4th and 5th level, host the General Directorate of Transport Infrastructure. The 6th level is occupied by the Political Leadership and the Office of the State Legal Adviser, with the spacious offices of the Minister and Deputy Minister located in the advantageous corners facing Piraeus Street. Five underground levels of the complex include a total of 640 parking spaces, the archives of the public authority along with required utility zones and mechanical rooms.

The unified office space is naturally lit through its perforated perimeter thus reducing the need for artificial lighting. Low-rise greenery occupies all roofs enhancing the energy profile and improving thermal insulation, setting thus a microclimate along the outer shell. Greywater reservoirs are provided to reduce water consumption and dependency on the water supply network.

by MARIANNA TSAPEPAArchisearchhttps://www.archisearch.gr/wp-content/uploads/Bundschuh_copyright_laurian_ghinitoiu_BlockVoid-House_04-370x700.jpg
SHARE THIS PAGE
WITH YOUR FRIENDS