I AGREE
Archisearch https://www.archisearch.gr/wp-content/uploads/old-site/3-proposed-interior-gilder-center-central-exhibition-hall-west-view-to-theodore-roosevelt-park.jpg
Text provided by the office
The American Museum of Natural History`s Richard Gilder Center for Science, Education, and Innovation is a new building that embodies the Museum`s integrated mission of science, education, and exhibition. At a time of urgent need for better public understanding of science and for greater access to science education, the Gilder Center offers the general public and school groups new ways to learn about science and share in the excitement of discovery.
“We uncovered a way to vastly improve visitor circulation and Museum functionality, while tapping into the desire for exploration and discovery that are emblematic of science and also part of being human,” said Gang. “Upon entering the space, natural daylight from above and sightlines to various activities inside invite movement through the Central Exhibition Hall on a journey towards deeper understanding. The architectural design grew out of the Museum’s mission.”
The Central Exhibition Hall, which will serve as the Museum`s Columbus Avenue entrance, was informed by processes found in nature. The space forms a continuous, flowing spatial experience along an east-west axis, allowing visitors to move beneath and across connective bridges and along sculpted walls that house the Museum`s programs. Recessed cavities in the sculptural walls create niches that will showcase exhibition elements designed by Ralph Appelbaum Associates, as well as laboratories, imaging facilities, visualization theaters, and classrooms while making the Museum`s extensive scientific collections more visible and accessible. The reinforced concrete walls of the Central Exhibition hall, with its arches and niches, will form the weight-bearing structure of the building`s interior.
More than any other gallery, the Central Exhibition Hall and the niches housed in its walls will reveal the Museum as an active scientific and educational institution with closely integrated educational experiences, scientific resources, and exhibition areas. The public will be able to engage with innovative tools used by Museum scientists, such as the tools used for gene mapping, 3D imaging, and big data assimilation and visualization, to gain a deeper understanding of nature’s complexity and how science is conducted today.
The design team saw an opportunity to reclaim the physical heart of the Museum and to complete connections between and among existing Museum galleries and new space, linking 10 Museum buildings through 30 connections.
The design greatly enhances visitor circulation at a museum where annual attendance has grown from approximately 3 to 5 million over the past several decades. It connects an array of existing galleries to new ones in ways that highlight intellectual links across different scientific disciplines, create adjacencies among and facilitate interaction within classrooms, laboratories, collections, and library resources, and place educational experiences within current scientific practice.
The visual language of the Central Exhibition Hall informed the conceptual design of the facade, which imagines the interior walls emerging and wrapping around the exterior. The exterior will be clad in glass and stone, which will be selected in the upcoming design phase with consideration of materials used in the existing complex. The conceptual design maintains the current heights of the Museum building complex on its western side, placing the Columbus Avenue facade at the same height as the buildings on either side of the new entrance.
On the south side, the facade is aligned with the adjacent building and steps back to meet the bordering building to the north. The conceptual design is consistent with the axial intention of the original 1872 master plan while recognizing the park setting in which the Museum is located. 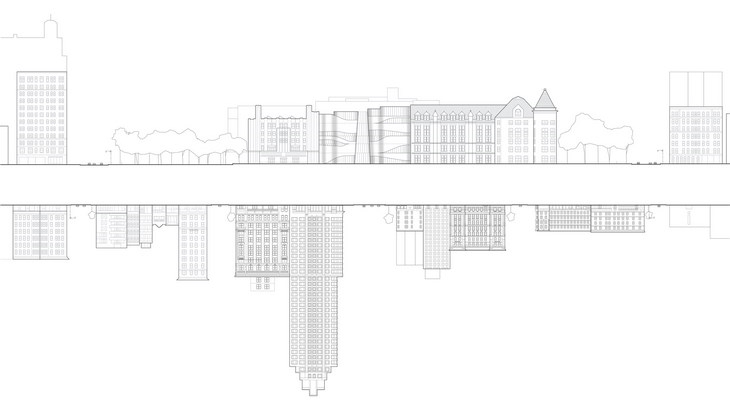 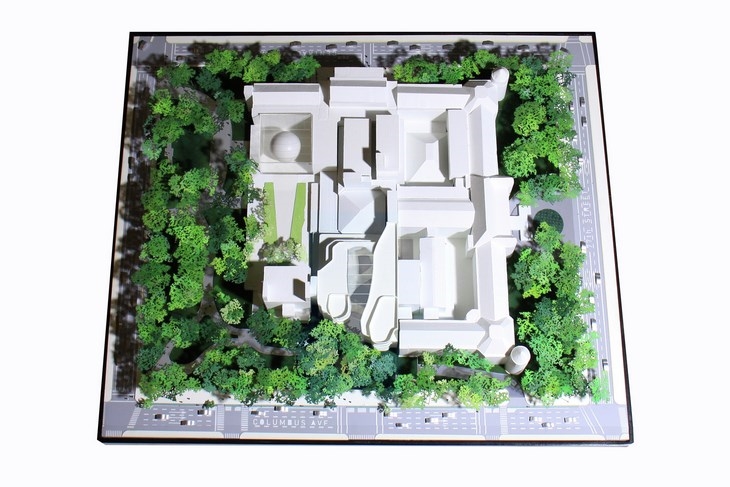 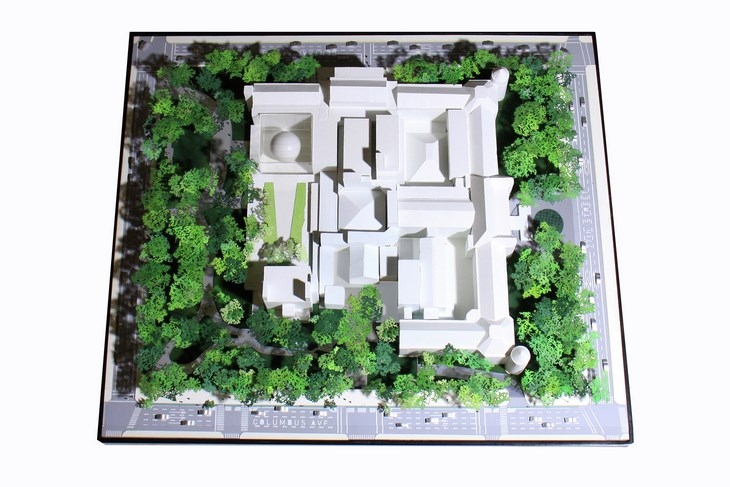 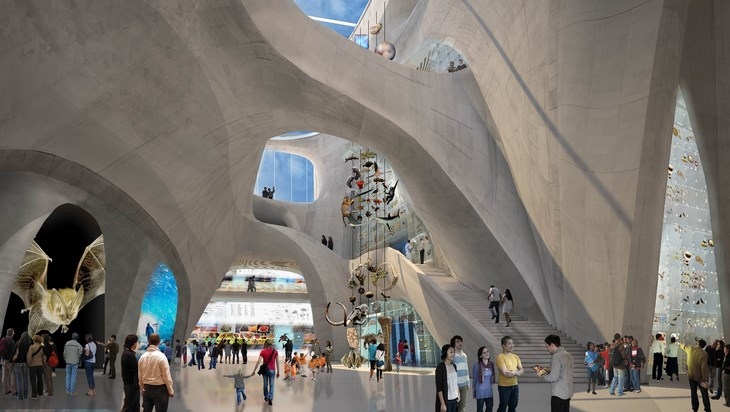