I AGREE
Archisearch Array
Text by the team
This diploma project chose to place its setting in downtown Athens. Our attention was captured by its latent dynamic and thus turned towards parking lots. Those structures can be seen as machines a habiter. The inhabitant, the car, seems to be deserting them. Amongst all types, that of the underground seemed more challenging. Two radically different locations were chosen so as to create a dipole, the parts of which constitute a case study.
The one in Kaniggos square in Omonoia, the other in Rizari Street in Kolonaki. The latter surrounded by a sparse urban fabric, green spaces and cultural activities. The former situated in one of Athens’s densest areas, surrounded by intense metropolitan activities, congestion, transportation. Two places, two versions. The clean and the dirty, serenity vs constant motion. The context as the defining design principle.
An obvious paradigm of two opposites in program and form which celebrate their birth from the Αthenian womb. A paradigm that is about breathing new life into existing structures. A revitalization that will offer its energy back to the city. The two parking lots, imminent to economic collapse but also to nationalization in the upcoming decade call for their new role in the metropolis. We baptize them as metropolis’s incubators, its accelerators (Kaniggos) or urban de-compressors (Rizari). Inhabitance through the programmatic element of the hotel stretches the notion of viability after the alteration of parking lots.
Digital publication on competition`s website can be found here.
Jury comment:
Two lots, two versions. Clean versus dirt, serenity versus movement.  The concept  proposes a reuse of an existing structure for various types of activities.  It is a successful case of urban revitalisation that gives back to the city a territory that became residual and only dedicated  to cars. The generated spaces are well mastered sceneries that create a friendly and dynamic atmosphere breaking the silence and darkness of the telluric deepness.
Comment by tutor John Zachariades:
“The problem with the future is that it never happens but its the same damn present every day.”
Janis Joplin
What characterizes the urban condition in these “the days of crisis” is not so much the infinite multiplicity of problems that we are called upon to tackle but the fact that they all hit us with equal force, no one less no one more than the other. They punch at us without any boxing sense, rendering us defenseless, sense-less. Without a thread to bring them together into a single narrative [that, could at least ask for one single answer, above all others] they blast at us, a paranoi[se] of issues pushing for a place in the line of the audible.
Meaningless!
This project in central Athens investigates this very issue: the clarity in the audible and thence, unavoidably, of the visible! It is not a solution for one site, which would make claims to realism. It is not even a proposal for all such sites which would make it a paradigm. It takes advantage of existing structures, two subterranean parking lots, misused, underused, disused. Two antipodal locations in the city – the one sparse, green, cultured, the other, dense, congested, intensely metropolitan – present us with a dialectic, a hammer and anvil condition, attempting to forge a clear urban metal.
To do that, the scheme abandons the safety of the surface or the rhetoric of `the city in the sky` and, knowing that light has always come from the dark, it goes underground and inhabits it. A gate and a garden and an amphi-directional labyrinthine movement open up the section of the world for the city: Continuity!
Not for the present, it appears as an archaeology of the future, a reevaluation of values and the bringing to the surface of meanings forever latent in the structure of the city. Utopian? Maybe… for the time being.
Facts & Credits:
Title: 058 | Sub_Zero – Life Beyond Parking
Students: Dionysios Koutsioumaris, Argyris Chronopoulos, Georgios Fiorentinos
School: National Technical University of Athens (NTUA), Greece
Tutors: Andreas Kourkoulas, John Zachariades (comments author)
Cover photo: Kaniggos, perspectives 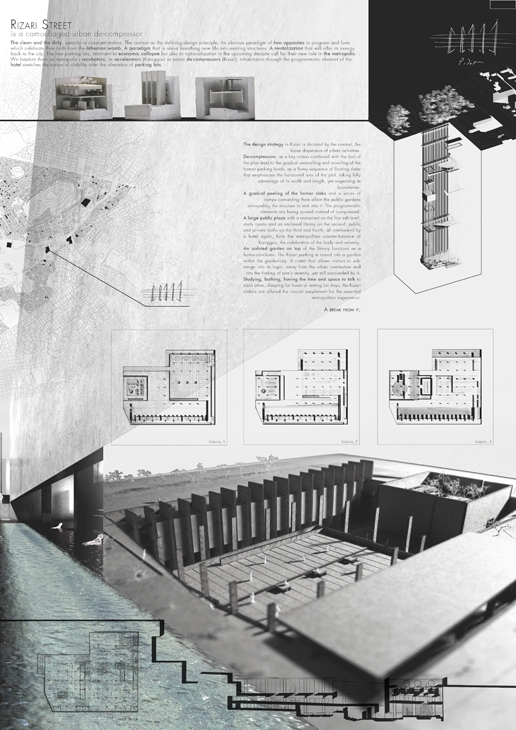 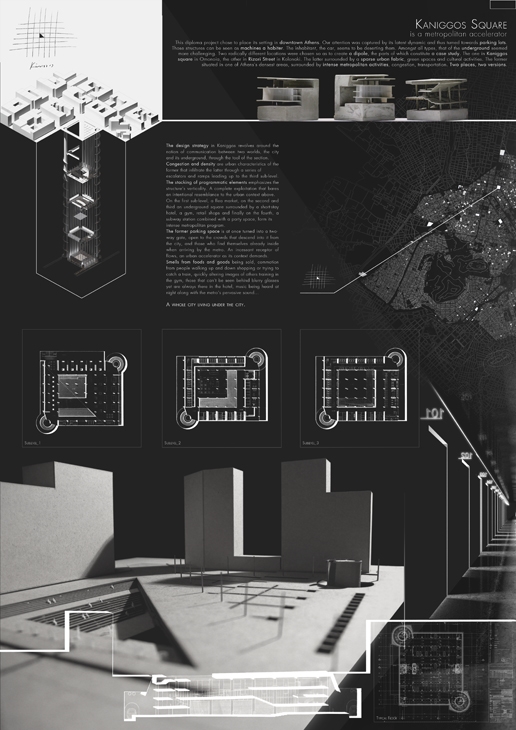 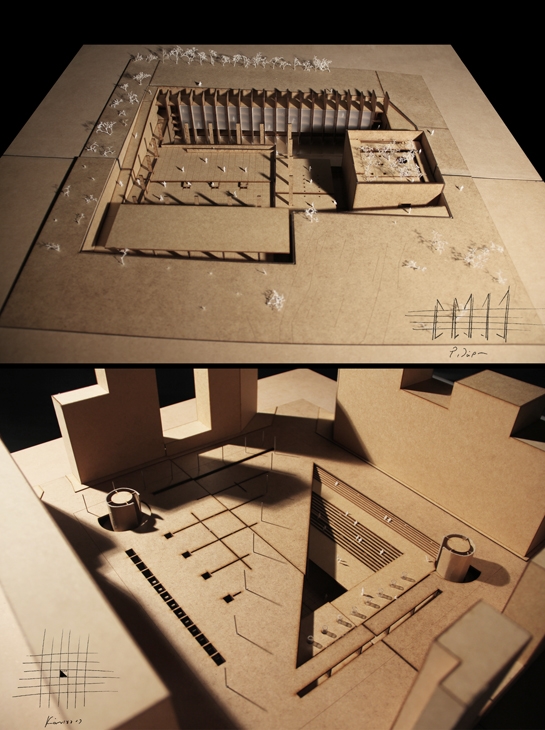 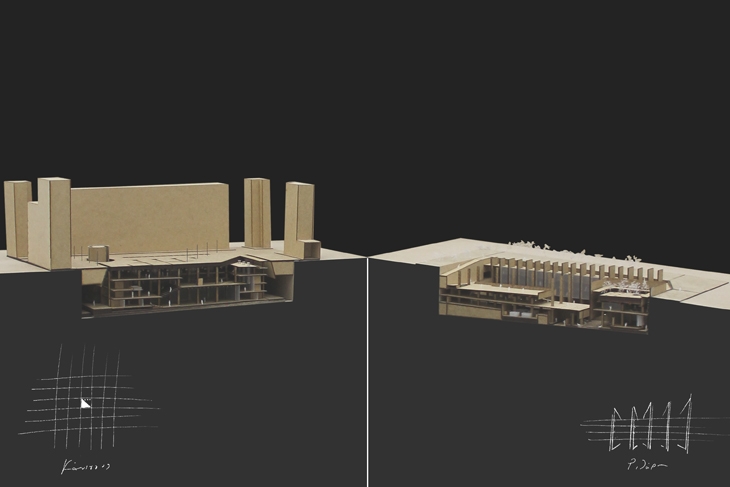 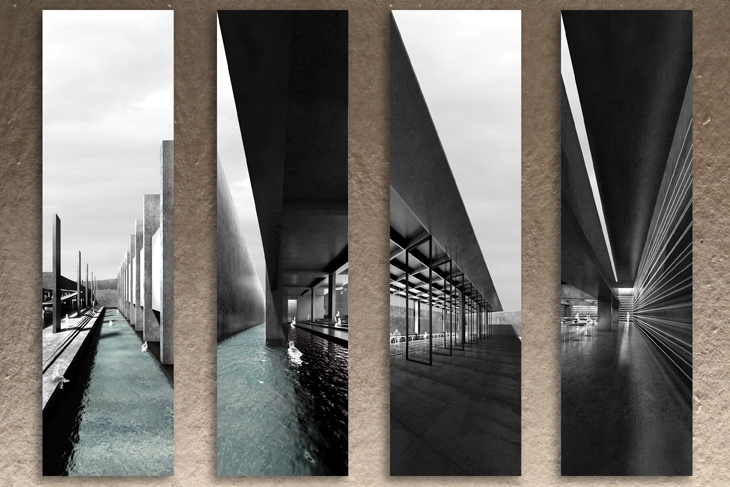 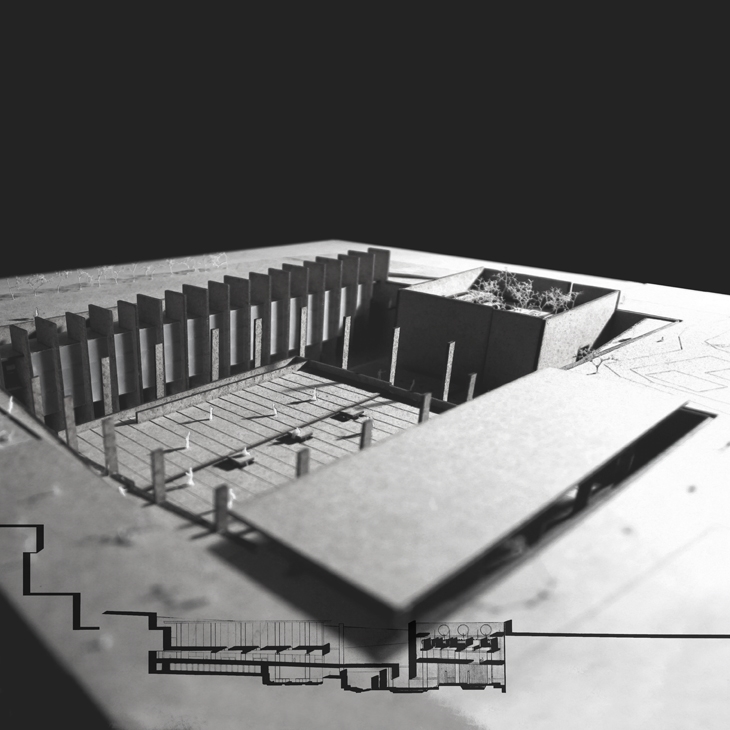 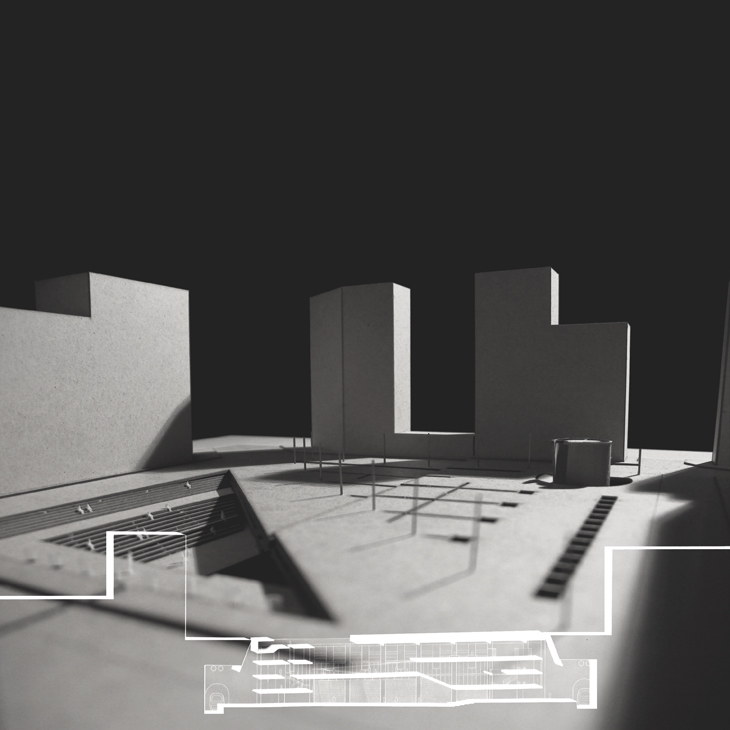 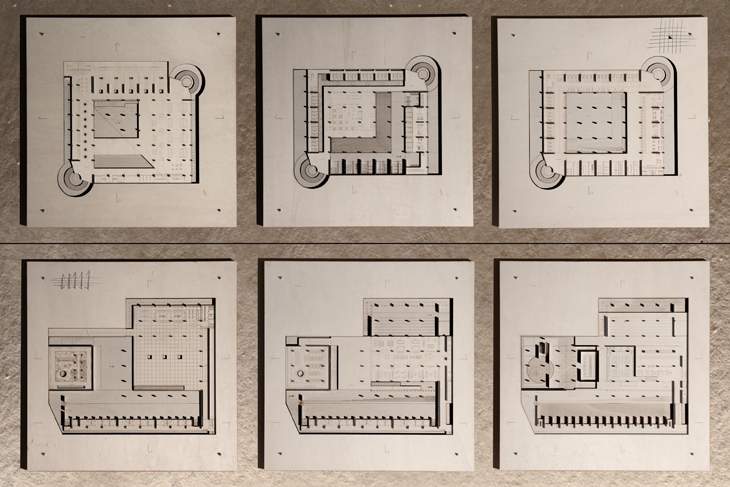 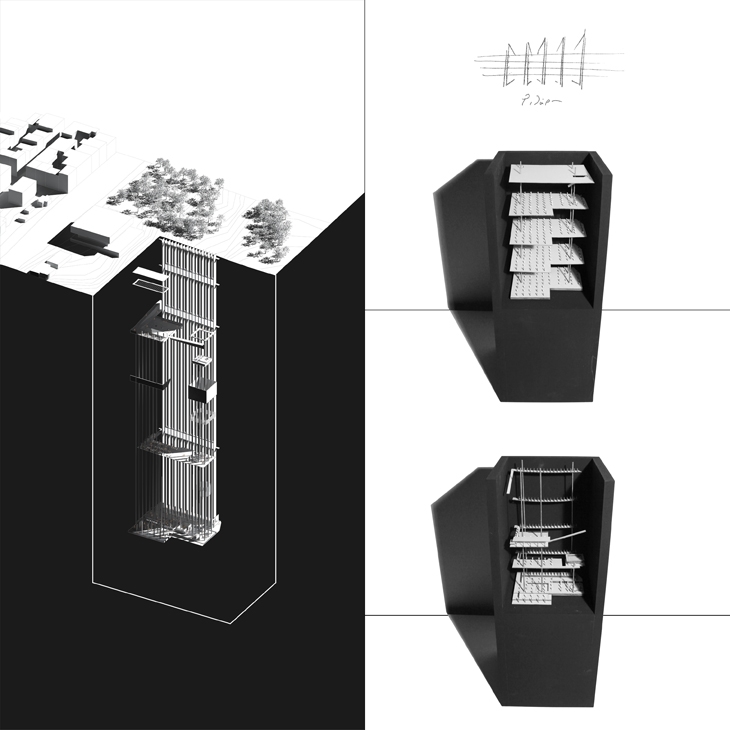 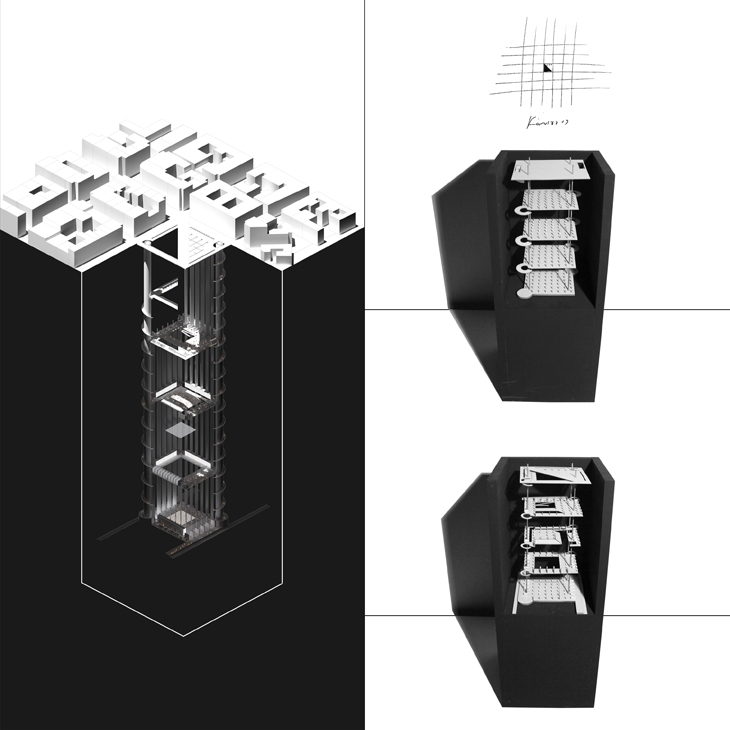 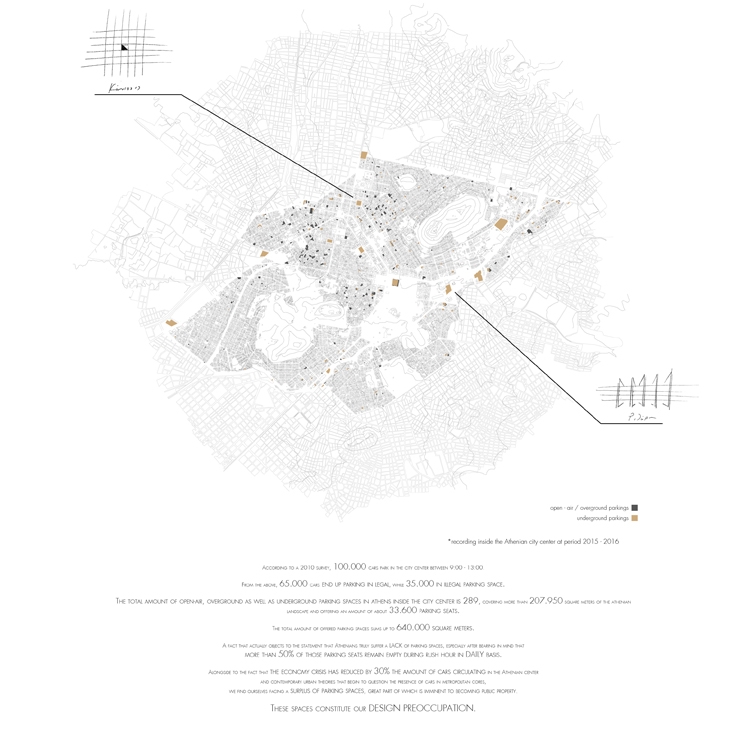