The diploma thesis of  Nadia Anthouli, Yannis Apostolopoulos and Nikos Papavasileiou entitled “From History to Becoming: Narrations of a city in crisis” was presented in May 2017 at the School of Architecture of Technical University of Crete and was supervised by Professor Panita Karamanea.

In these terms, one of the major concerns and motivations behind the present design thesis has been the living conditions in modern society, as seen in constant flux, in an urban and of metropolitan scale environment. Especially in Greece, the political and social instability caused by radical internal political conflicts is the main source of a general imbalance which is most reflected in the very center of metropolitan Athens. The center of Athens is experiencing a period of rapid structural change, in which deeper pressure is accompanied by anxiety, instability and fear for what may happen in the near future. 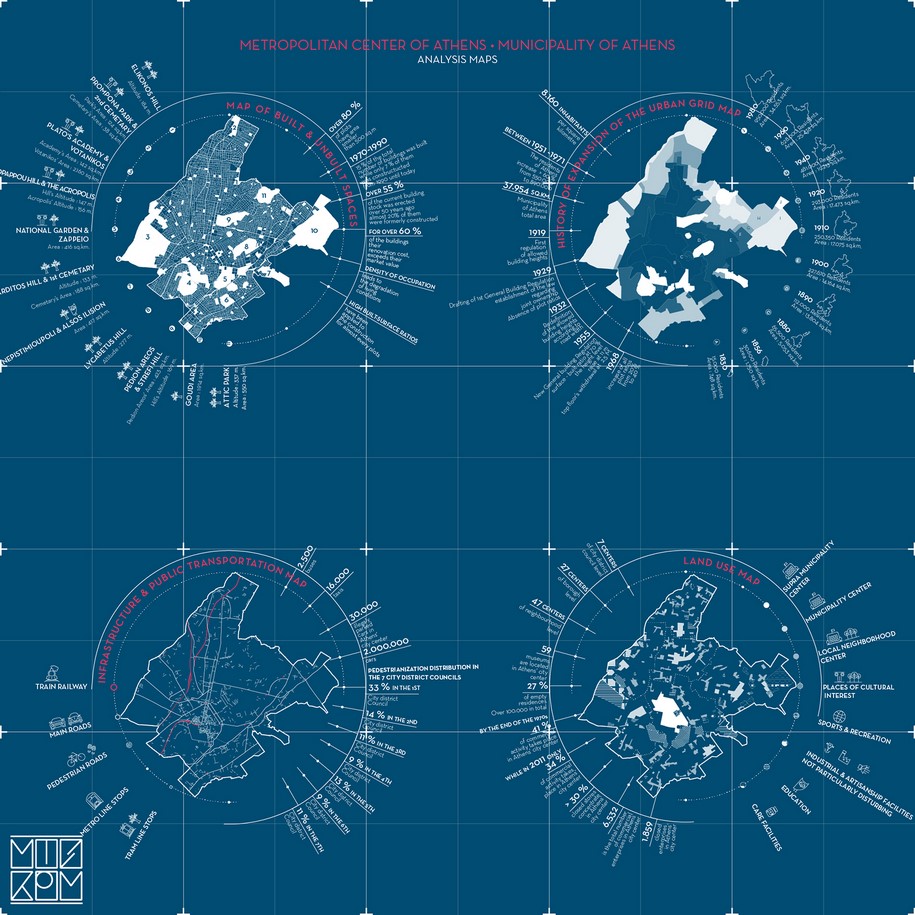 In an effort to understand those dynamics underlying in the ever-changing athenian landscape, this thesis focuses on the shift from a historical analysis point of view to one that is trying to decode the procedures of becoming-Athenian. This effort points out that any major change requires that all social groups, as well as individuals, should be involved in a radical way of thinking that will lead to a new era of new becomings and narrations; in such terms, both our current way of life and thinking will be affected.

This kind of analysis indicates the neighborhoods of Metaxourgeio – Kerameikos, located in the expanded area of the historical center of Athens, as the yet challenging candidate to test the procedures of becoming in a contemporary, thus historical context; in other words to test its resilience. The risks that arise, in the light of phenomena such as of gentrification, form an notable social and anthropological gap triggered the analysis of this area under real circumstances. 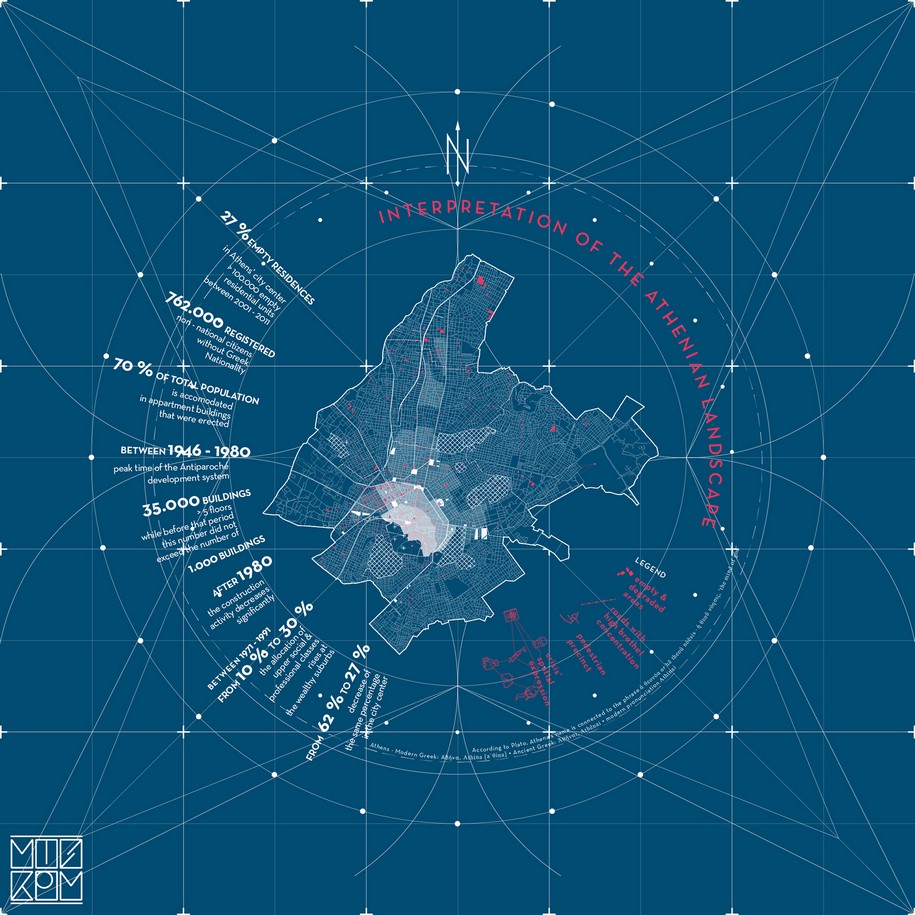 The thesis’ methodological and research tools, are the analytical recording and understanding of the intriguing characteristics, both social / anthropogenic and geographical / spatial, with the interest focusing on the inter-relations and dynamics between them.

The outcome of the research process is the construction of maps that visualize data, that are used to reach conclusions in order to move on to the drafting the project’s conceptual framework. 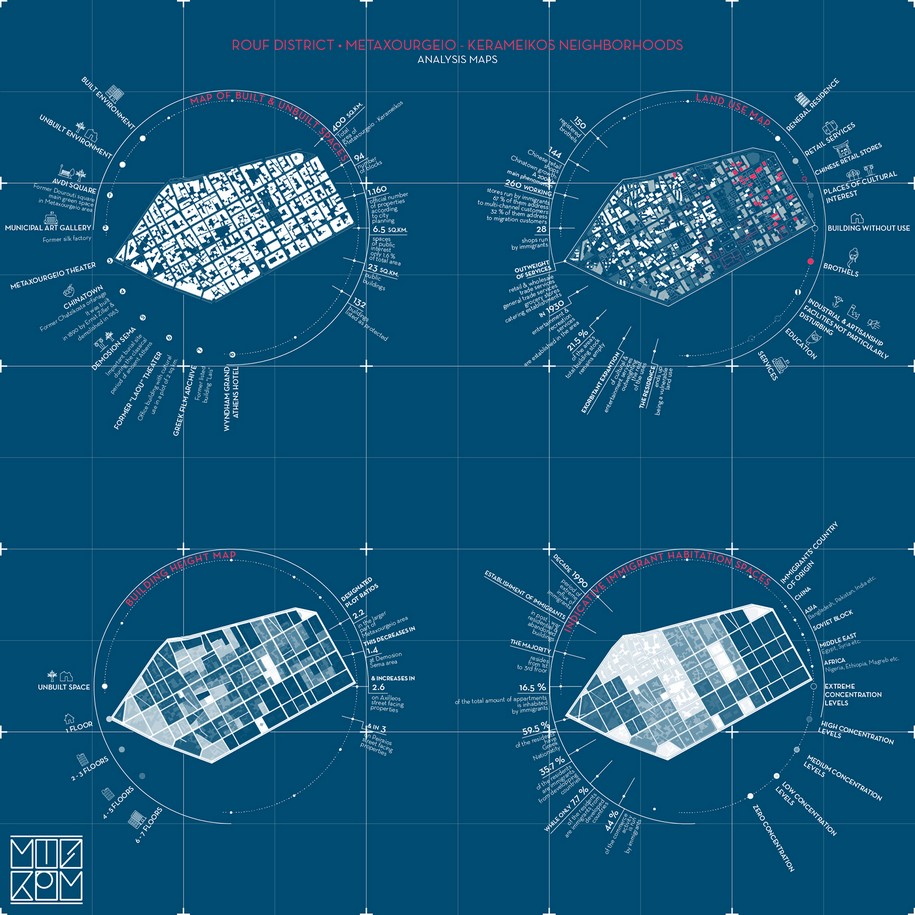 The findings derived from the analysis, along with our own personal mapping of the area, resulted in the returning theme of the most demanding of all dialectics; the dialectic of the minor “otherness” in contrast to the major “subject”, in the context of a the contemporary living conditions expressed in the public space of Athens. Such conditions of “otherness”, can refer to both social circumstances and groups of people. 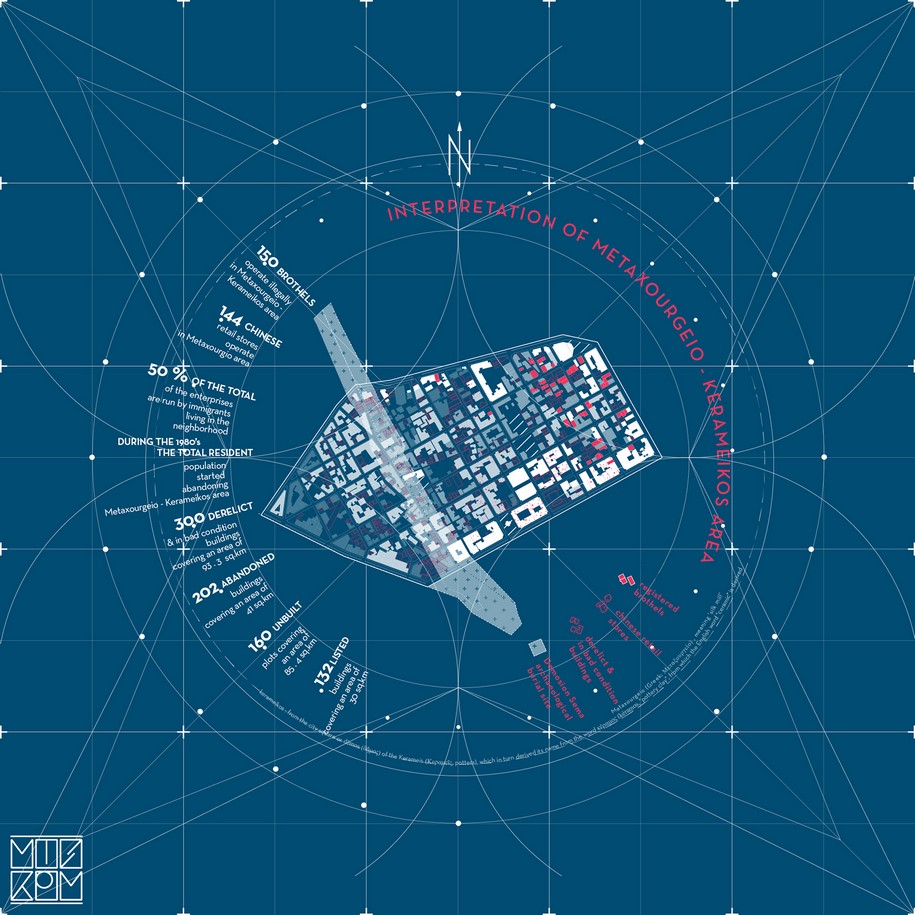 The material produced from analysis, that constituted our archaeological layers, was the think tank from which the new minor-narrations were extracted. 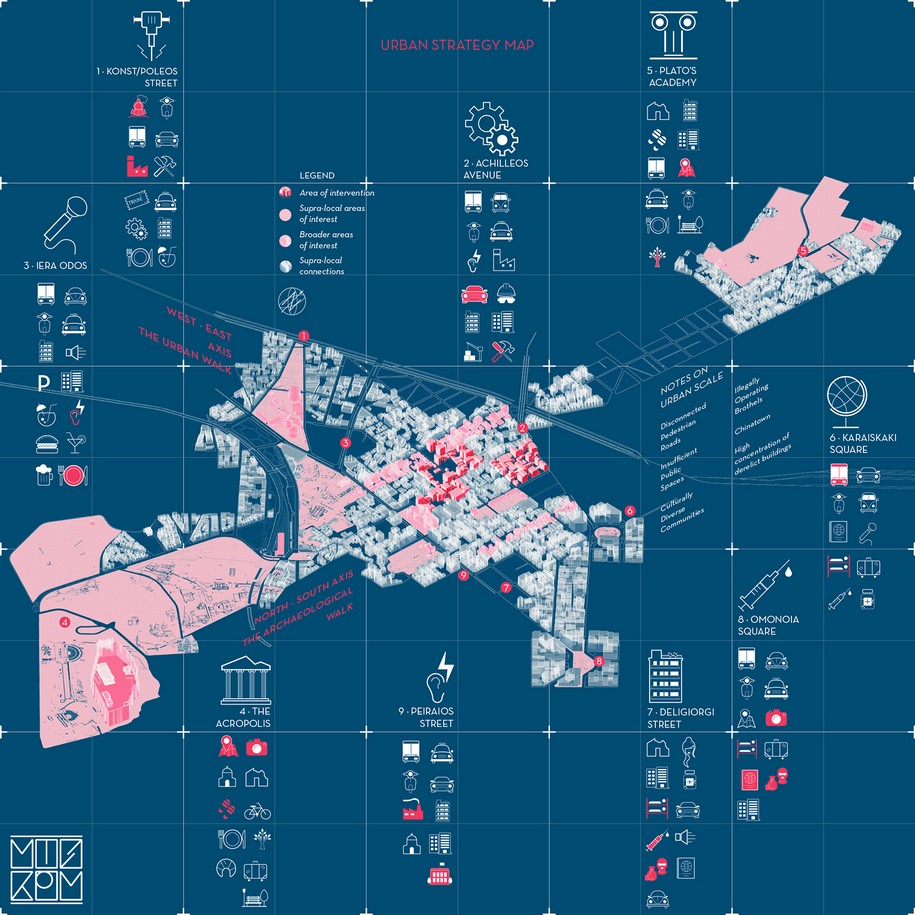 The material produced from analysis, that constituted our archaeological layers, was the think tank from which the new minor-narrations were extracted. This procedure translated into five distinct scenarios of an alternative urban reality. Such concepts were created not in order to label life and tidy up our ideas, but to transform life and complicate our ideas.

This process aims in the incorporation of parallel, minor – narratives, into the major already established and imposed from the official political forces of power reality.
As a result, a new dynamic is forming, in which the exchange of experiences and the pursuit of shared ideas is leading to a new commonplace. By thinking differently, we create ourselves anew, no longer accepting already created and established values and assumptions. In this new reality, common sense is destroyed and also who we are, in order to become. 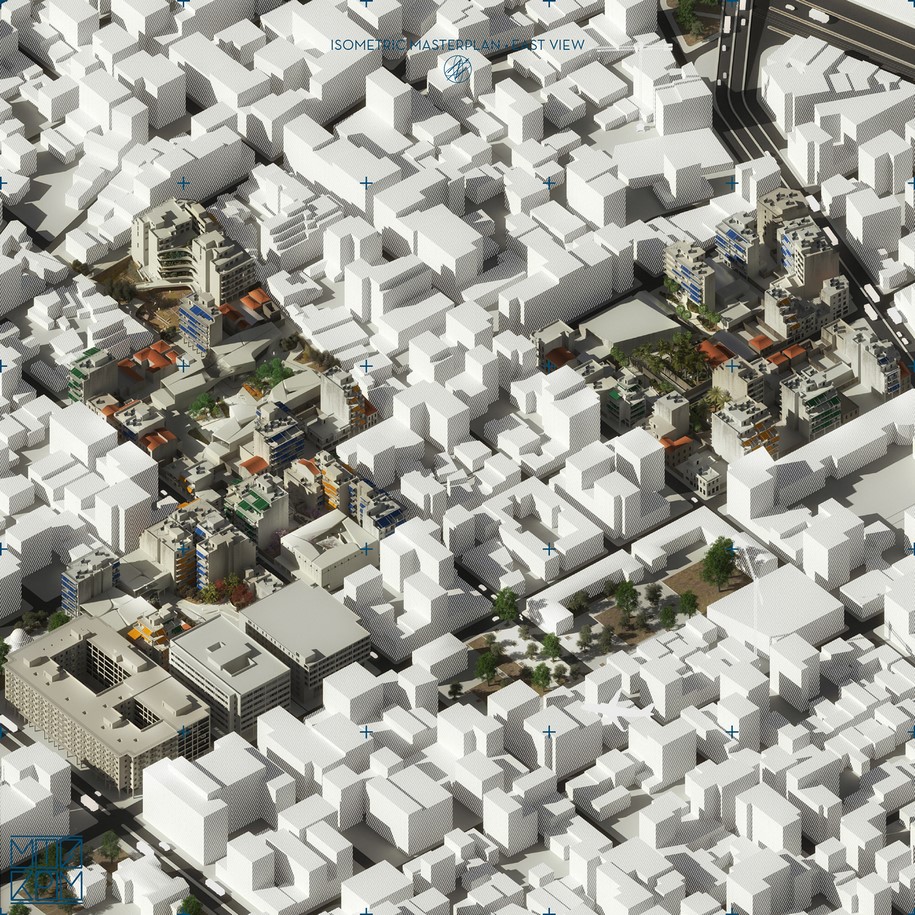 What if, one day, the sensitive social group of prostitutes was no longer a victim of trafficking and former traumatic personal experiences, but, on the contrary, was able not only to define the way they determine themselves but also the way society regards them?

What if, one day, the closed social group of Chinese community in Greece was no longer considered from society as an antagonist, the reason that any business efforts of the local commerce and retail companies are unsuccessful, but, on the contrary, a paradigm of successful marketing strategy?

What if, one day, the social group of non-national people living in city centre, was no longer considered as a foreign system that implies fear and discomfort, but, on the contrary, their foreign cultural heritage was an important reason for the locals to understand and interact with them?

What if, one day we were no longer in need of local or even foreign economic forces to gain profit from selling out the national property, but, on the contrary, there was an organization responsible for bringing to the spotlight the unique greek traits and characteristics, in order to attract philhellene investors to support the areas buffered due to the crisis?

What if, one day, the abandoned parts of the city fabric were no longer ‘black-holes’ that generate discomfort and fear, but, on the contrary, became -literally and figuratively- natural oasis found unexpectedly in the dense city grid?

THE SCENARIOS IN METAXOURGEIO – KERAMEIKOS ARE

The sensitivity associated with the specific social group leads to the scenario being situated at a distance from the sociogeographic condition that generated it, Iasonos street. The traditional relational section of the brothels with the street level is overturned, thus leading to the “convent” of the prostitutes being situated at the top of the ex-theatre building, which is accessible only to them. The visual encounter with this social group is conducted selectively, through the creation of a “podium” that is accessible to the city only from the upper levels of the museum. The left-over space is destined only to become a protected garden for the prostitutes inhabiting the “Convent”. 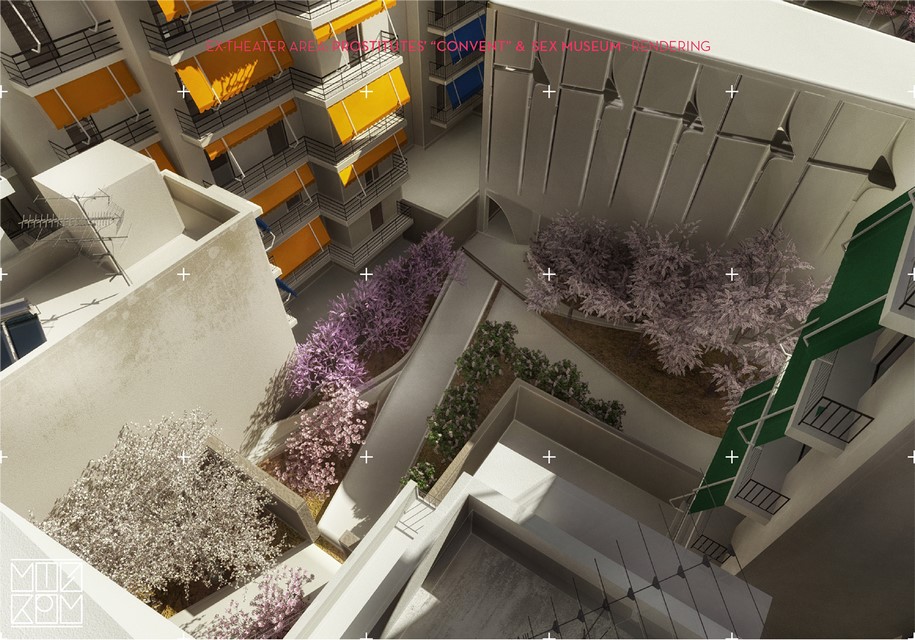 The scenario is situated in a city block next to the condition that generated it, that of the China Town in Athens. The traditional condition of the rigid boundaries that usually describes the chinese activity in the area is retold, thus rendering the left out space of the city block a new terrain on which the chinese market is situated, creating a new surface that promotes the expression of that activity in public. 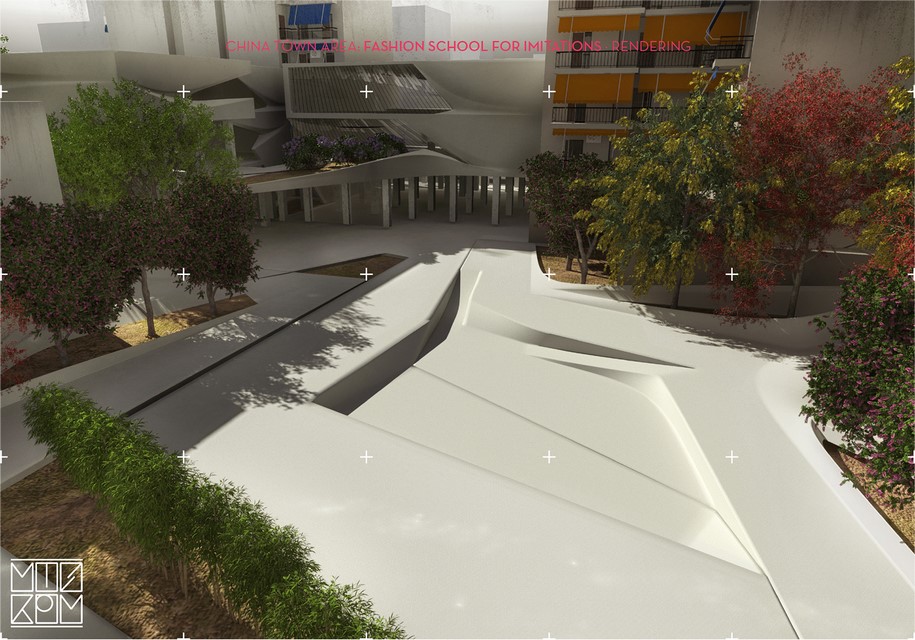 The site of the scenario is situated in a quasi-excavated archaeological site with limited access. Specifically, it includes the archaeological findings of the Demosion Sema, the ancient burial site of the city of Athens, even before the Classical era. The condition of the ancestral subterrain comes into contradiction with the concept of a multicultural layering of the contemporary city. In the convergence of those two, a con-temporary multicultural new hyper-terrain of the Hotel is created. The program of the Hotel intrudes the typical “Polykatoikia” and the archaeological site, giving birth to a new scheme of meta-local and meta-temporal living. 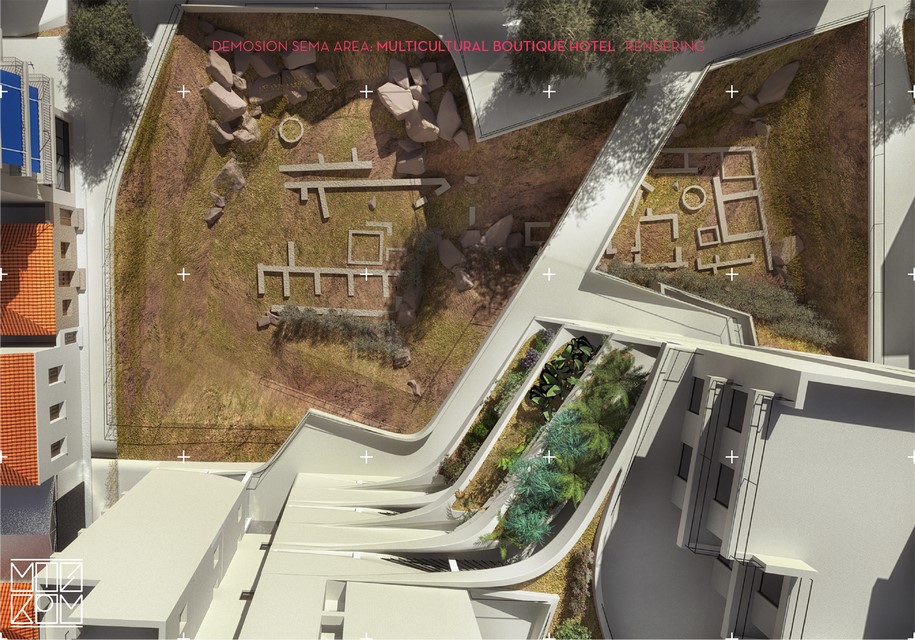 This scenario embodies the need of the area for a spatial framework in which the creative energy of the era of the crisis is actualized. Close to the sole public space of the Metaxourgeio – Kerameikos area, the Avdi – Dourouti square, the unbuilt space on both sides of Leonidou street is activated. The flux of contemporary socioeconomic condition creates a topological continuum of surface – depth, generating space both to the closed and open program of this meta-economic activity. 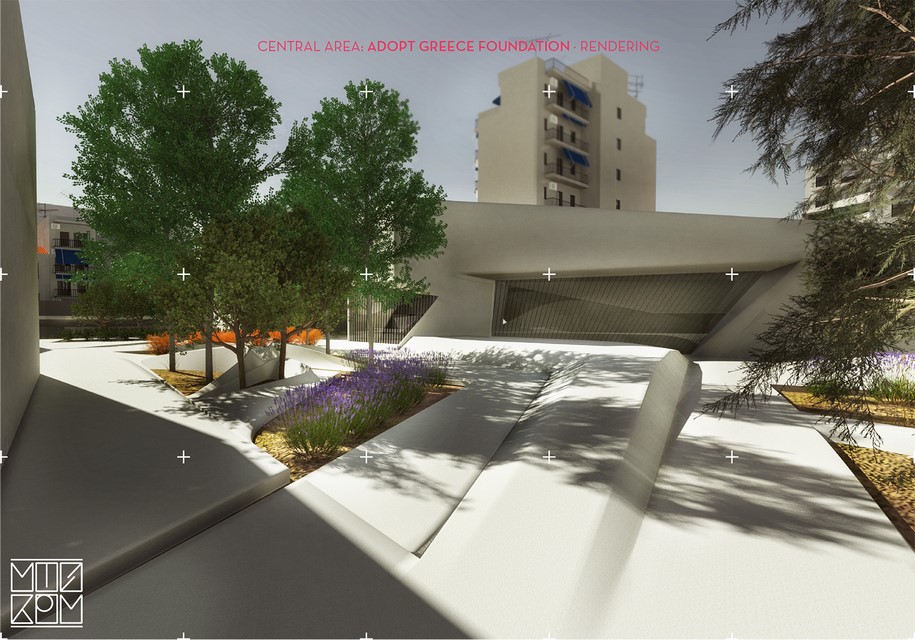 The scenario is situated in the northern part of Metaxourgeio – Keremeikos, where the sense of decay of the derelict, once-built environment is dominant. The left-out space of the properties is activated, generating an alternative route inside the city, starting from the end of Paramythias pedetrian precinct, through the former abandoned properties. The ground is reformed as a new topological surface, in which the pathways define areas of hard surfaces, while the rest is left open to transformations becoming an outburst of natural landscapes. 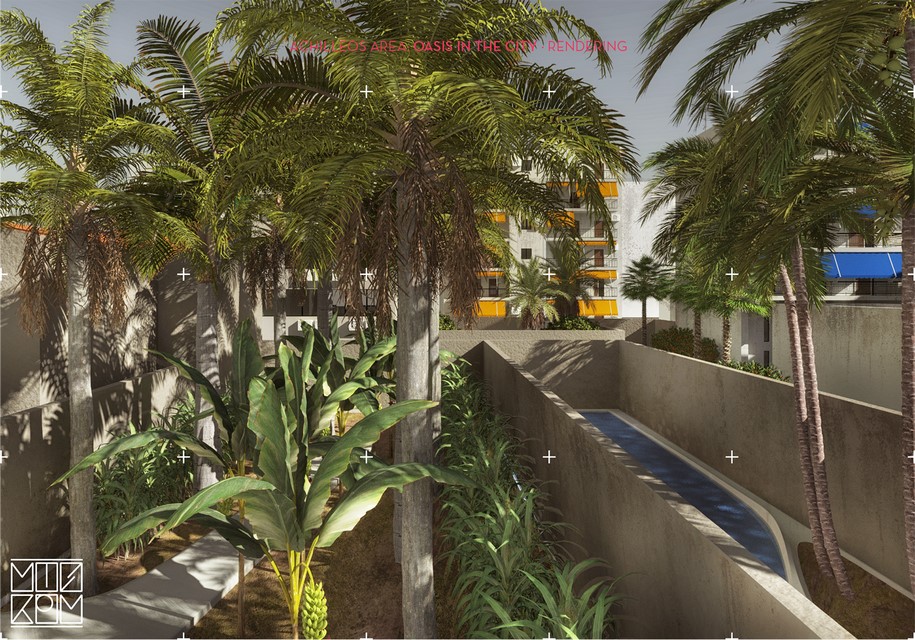 The aforementioned procedures of becoming overcome the dialectic duel that the athenian landscape is riddled with historically. This design problem is answered in the thesis by challenging the limits of architecture in the outreach of form and structure, surface and depth. The emphasis during the design process is given in the transcendence from the plane of the actual (space) to the virtual (narrative); the process is in constant move between those two. This, in architectural terms, gives its place to the duel between rigid and flexible spatial limits, Cartesian and topological surface. 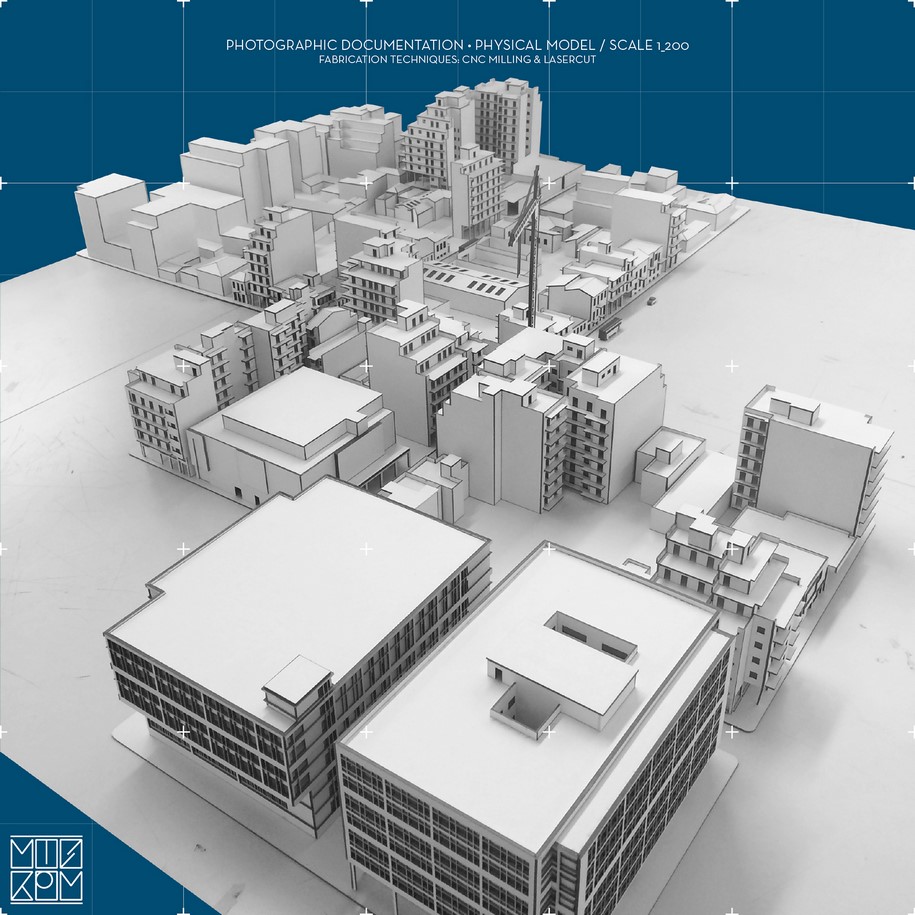 In this approach, there are no fixed terms imposed on the individual; each time the becoming of space is a result of the subjects’ interrelations that act in it. Consequently, the program emerges from those acts without being a priori implemented, rendering the space proposed open to dynamic and unexpected events. 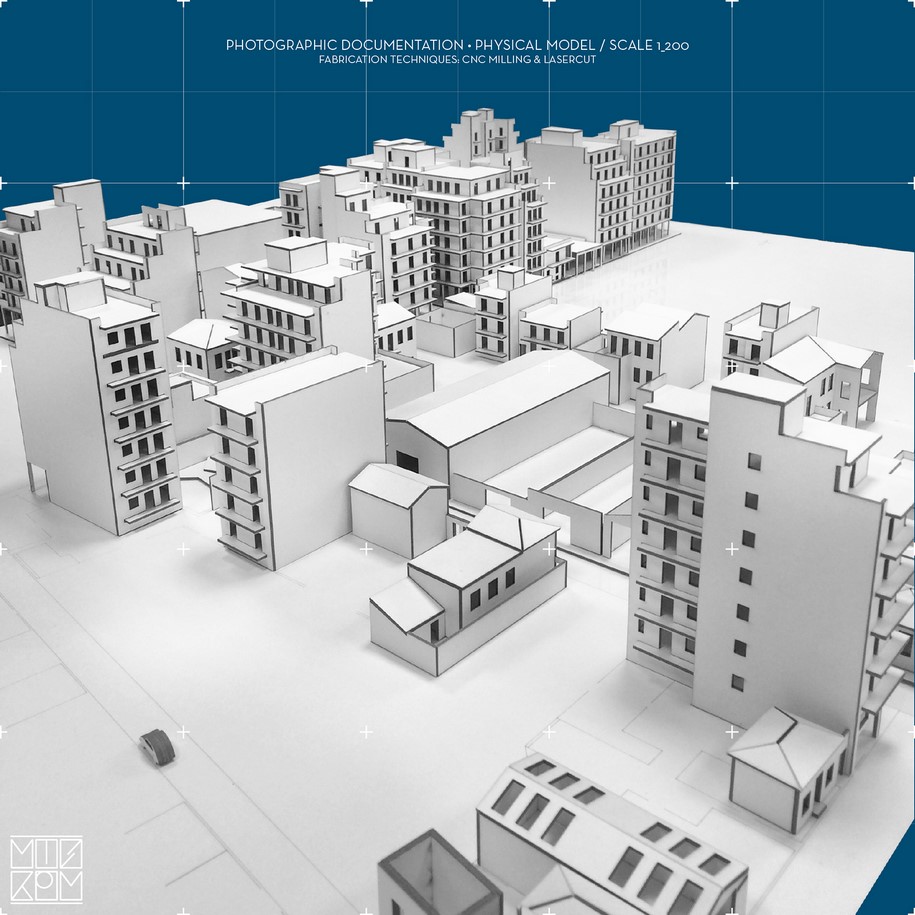 The athenian landscape is treated as a raw material, flexible to transformations and mutations. This landscape includes the built structures, the natural and artificial ground, the underground. Through “material” addition, removal and boolean operations, new spaces are born to host the emerging program. In the final step, the same procedures are used to visualize the proposed design. By using three-dimensional cutting planes, the design outcome and its spatial information and relationships are revealed. 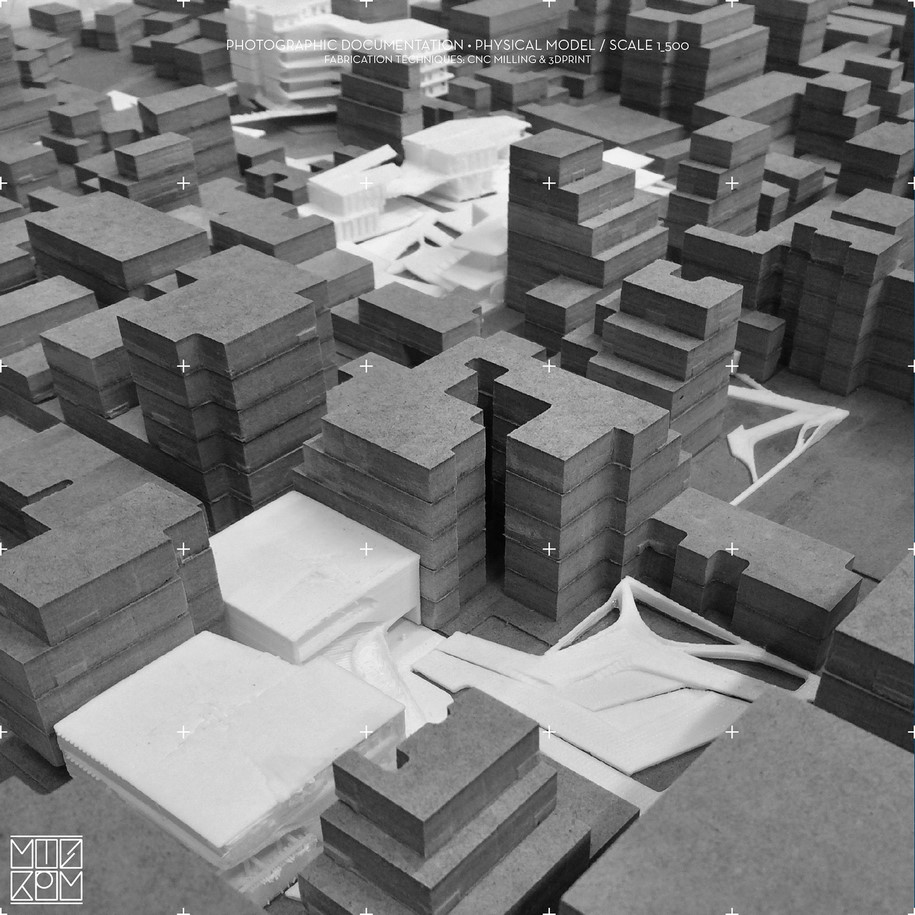 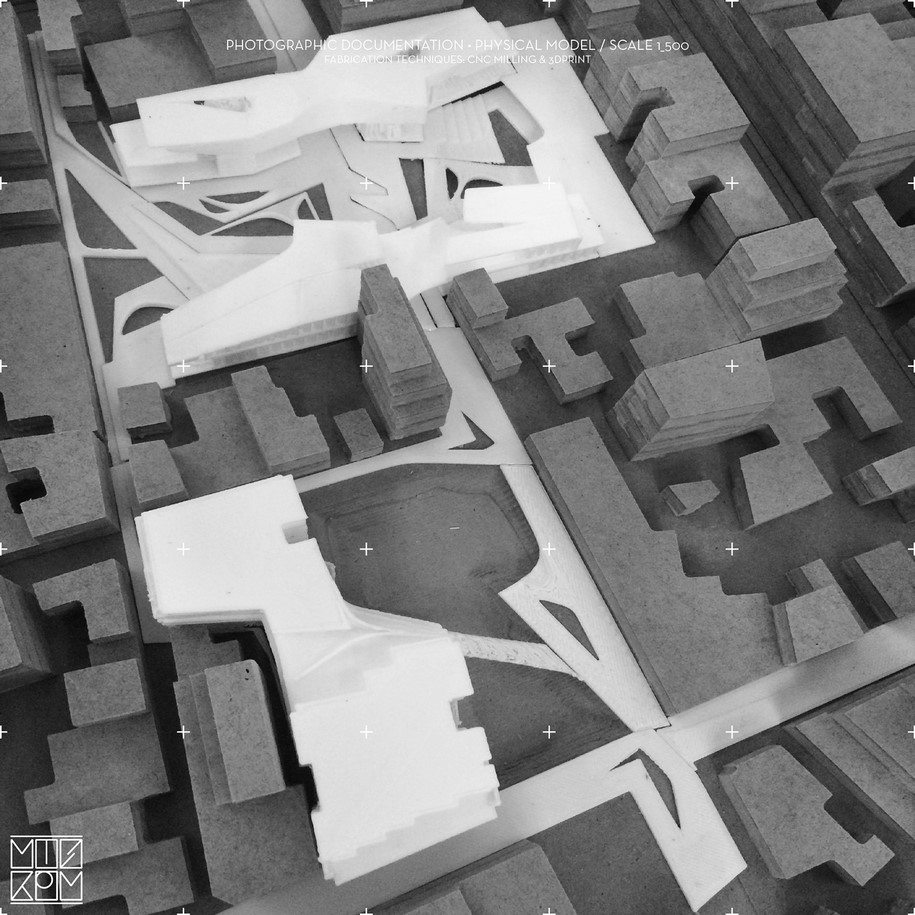 As a conclusion to use Deleuze’s words “a “problem” is not a simple question that needs to find an answer; a problem is something that disrupts life and thinking, producing movements and responses.” 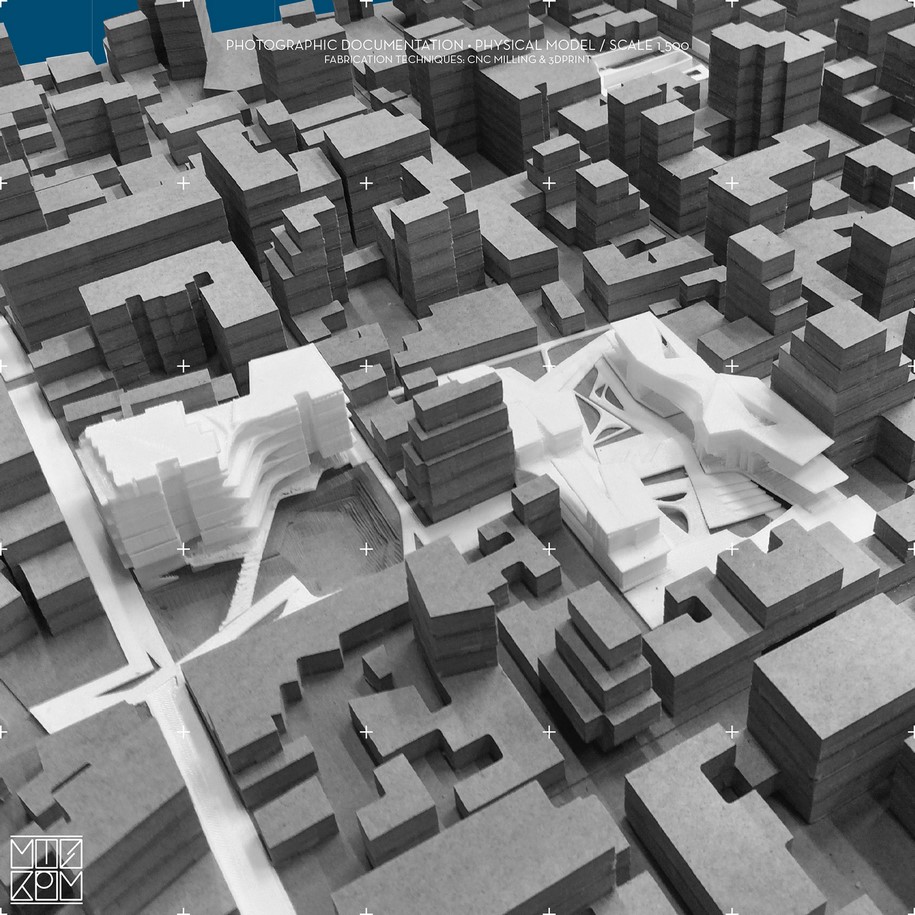