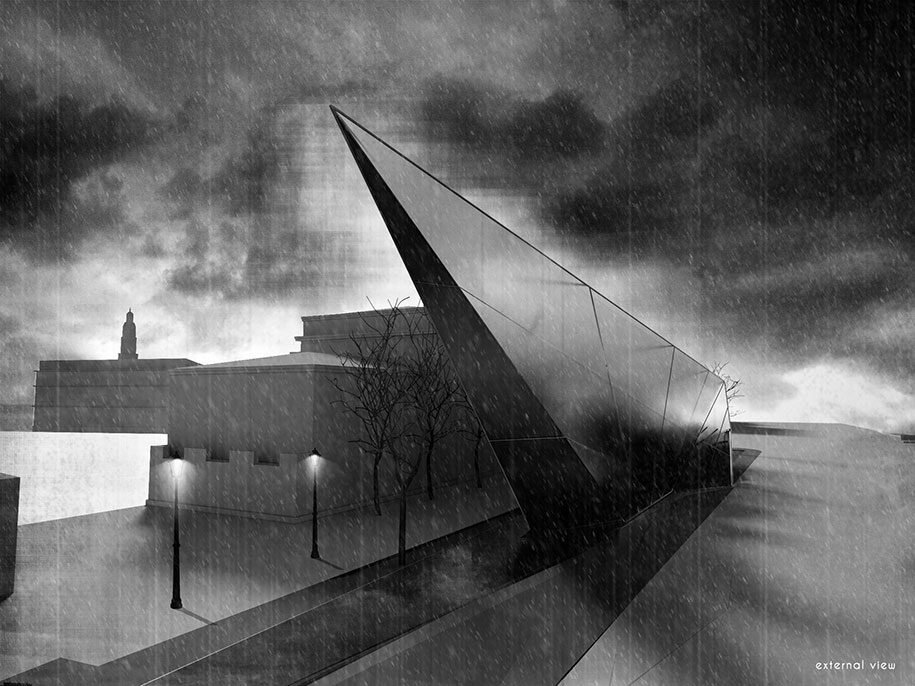 The assertion of freedom constitutes an act beyond the factors forming personal identity. In front of asserting human rights everyone is equal, since common thoughts and acts shape an environment where individuality cannot claim a place and every action creates a chain of reactions. This is exactly what the Baltic way movement represents, a peaceful protest that is the reflection of a dynamic common act. Although ostensibly the orderly juxtaposition of people seems like an act rather quiet and tame, the message that it aimed to pass to the world was not at all tame. It was powerful and intense. 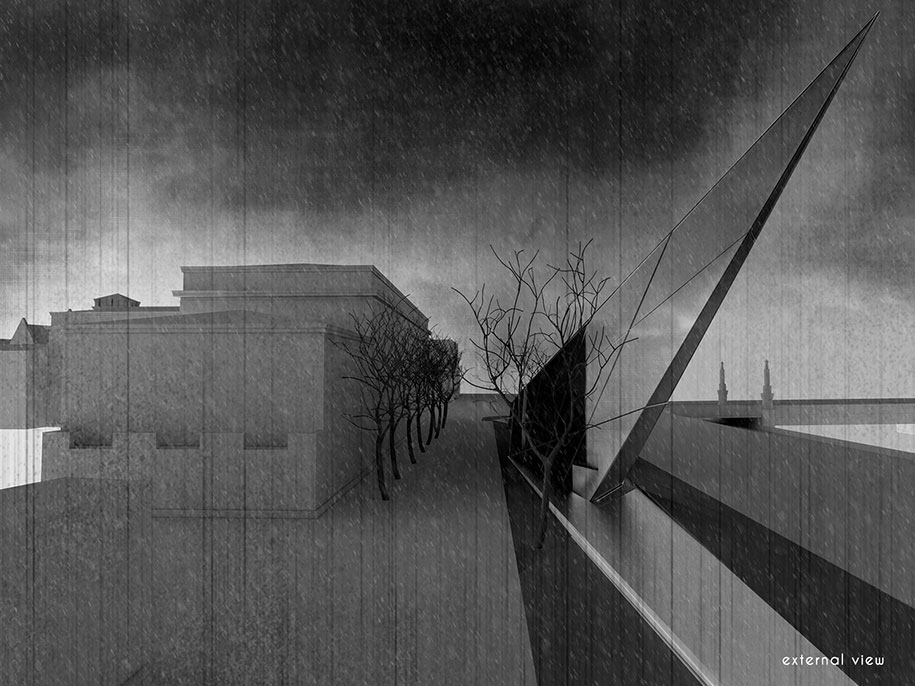 The main objective was the creation of a composition in compliance to the architectural character of the cityscape, but at the same time bespeaking the effusion, the outcry for freedom, projected on the edgy form of the design reflecting the emotional state of everyone participating in the protest. Emotions are translated into space, creating edgy forms and human presence is represented as vertical columns made of a reflective material, attached to the trasparent glass cellings of the triangular patio. This way a unique expirience is created, causing a variety of defferent feelings as someone is walking through spaces. 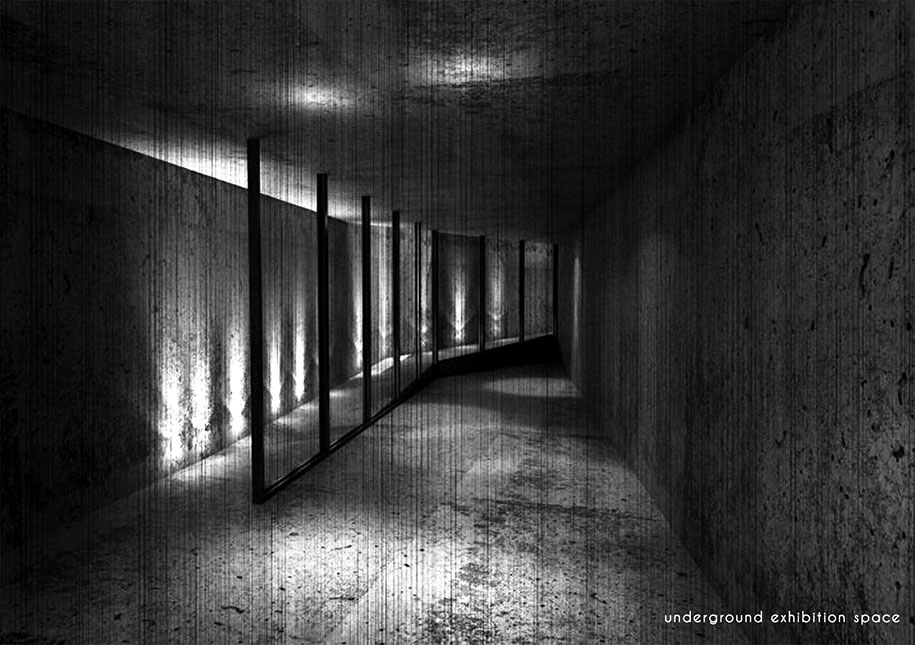 The outer skin geometry of the memorial expresses the intense and excessive emotional state attending an act of protest. The double skin façade is allowing natural ventilation for heat extraction during warm months and the reduction of heating demands in winter. The outer skin of the memorial is translucent, made of insulated glass ensuring daylight is scattered deep into the rooms, creating at the same time a play between those moving inside the building and those observing it from the outside. 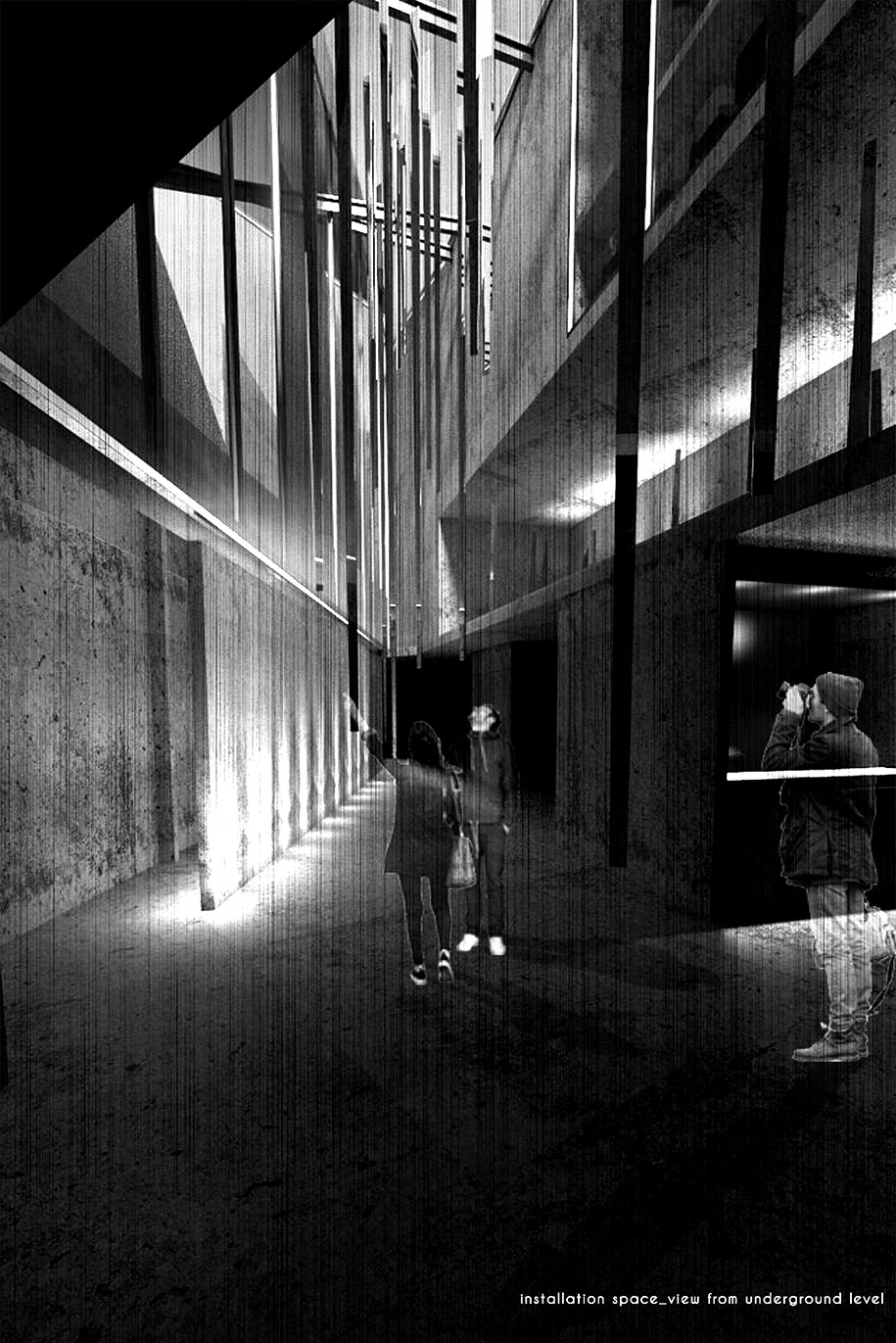 The transmission level can be adjusted to the special lighting requirements of each space, thus the insulated glass provides protection from the sun, glare protection and excellent heat insulation. Finally, the element of water is used in the outdoor space of the memorial, aiming for achieving cooling conditions during the summer and improving the microclimate. 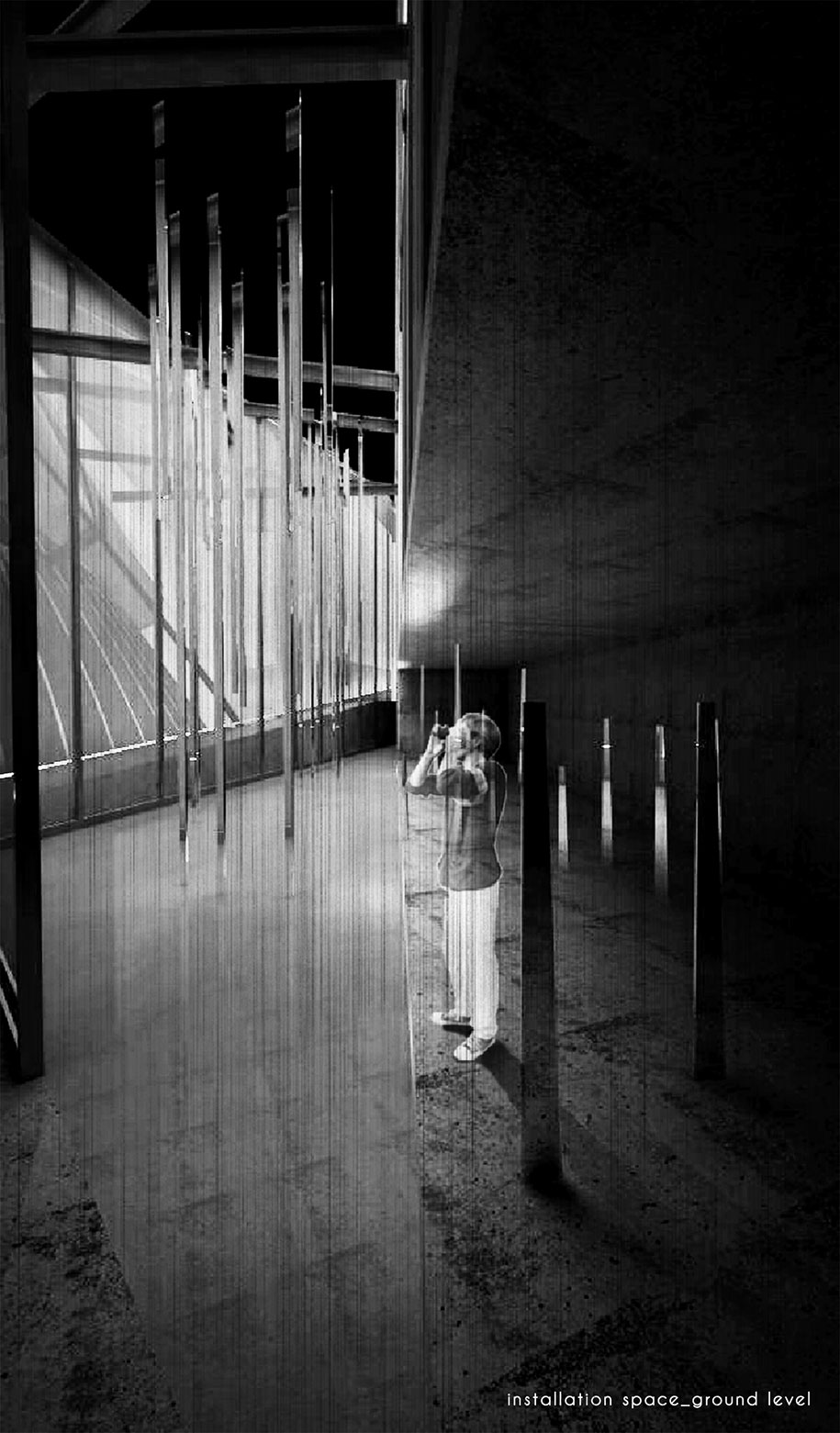 Each function follows a regularity resembling to the human chain, since they are organized parallel to the visitors’ route. The design aims for the visitor to gradually sink into the ground, creating the feeling of suppression and consequently leads him progressively higher in order to end at the highest point, promoting an intense sentiment of freedom. 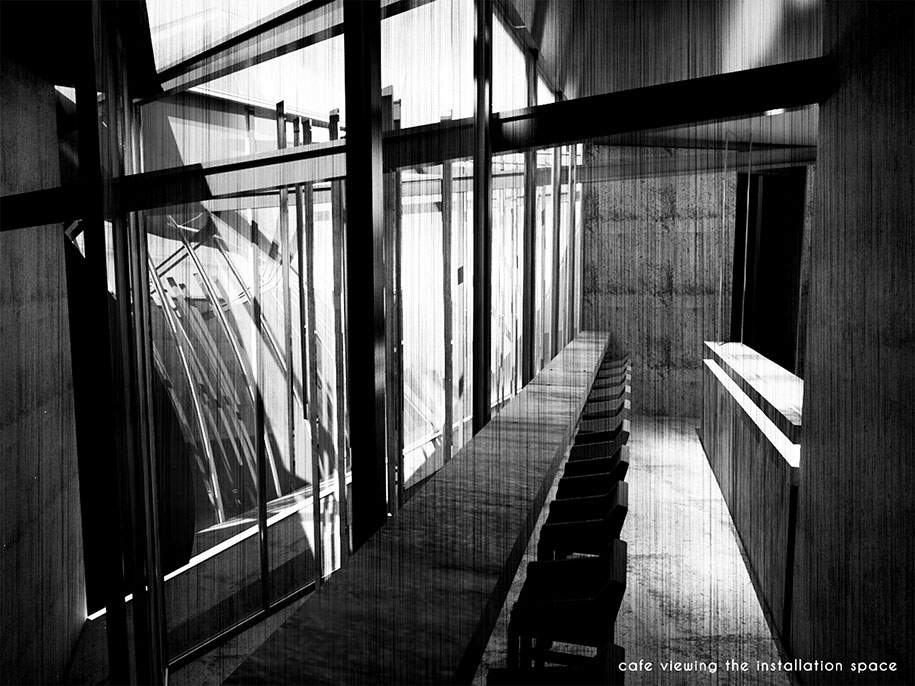 The core of the design comprises a central triangular patio enclosed by the memorial functions as well as the main circulation ramps, organized around it. It consists of an installation composed of vertical elements made of a reflective material mirroring the space and the movement around them. 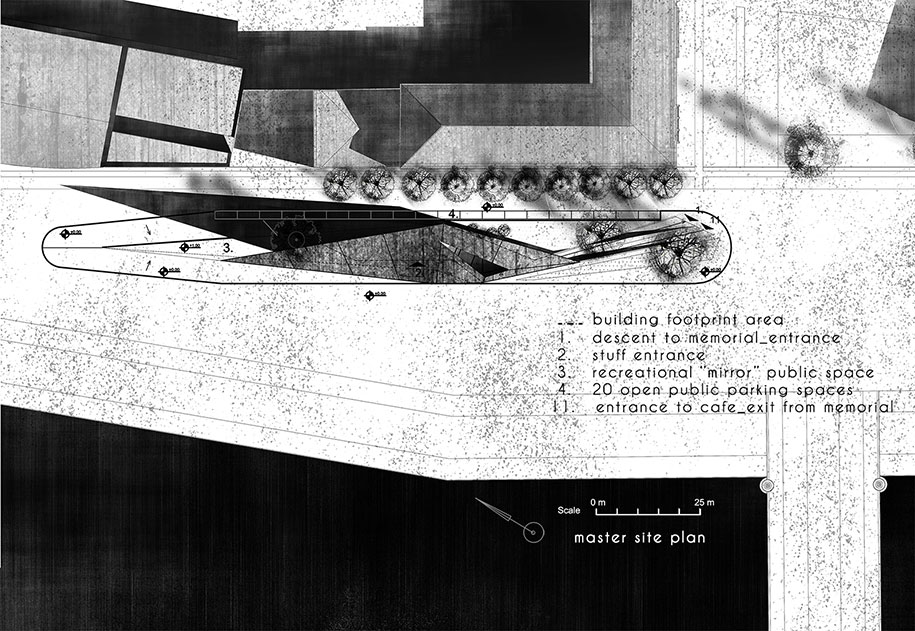 The columns are lightly attached with each other and to the translucent ceilings in order to interact with the visitors walking around them and moving with them, rendering human as the main constituent of the design process and making him a crucial part of the installation.

The installation pierces the floors and is visible from every corner of the memorial creating a play with light and human presence since it is not distinct whether someone is an observer or is being observed, redefining the visitor’s role which is constantly alternating, making him a defining part of its character. The space is experienced in an unexpected way, since it is constantly redefined by the human presence and actions, so that an impersonal structure obtains an identity closely associated to the visitor’s. 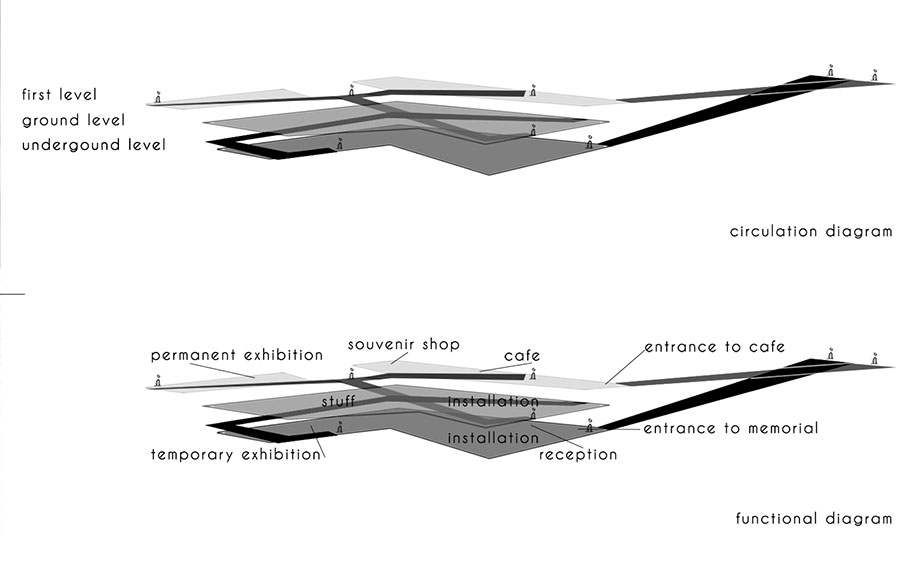 by MDFF GREECE MDFF GREECEArchisearchhttps://www.archisearch.gr/wp-content/uploads/Nigel-Coates-Cover-370x700.jpg
SHARE THIS PAGE
WITH YOUR FRIENDS