AT +1650M: Designing for Vasilitsa Ski Center diploma project is about conceiving and designing a skiers’ reception building at the lowest point of Vasilitsa Ski Center in Grevena, Greece (base of the center’s 3-seat aerial lift, 1650m. altitude), thus providing adequate infrastructure for the constantly increasing number of the Ski Center’s visitors – one of the largest in Greece – while at the same time respecting the natural habitat of Vasilitsa.
The building is conceived to operate during the summer period as well, hosting activities like hiking, climbing and downhill bike riding. 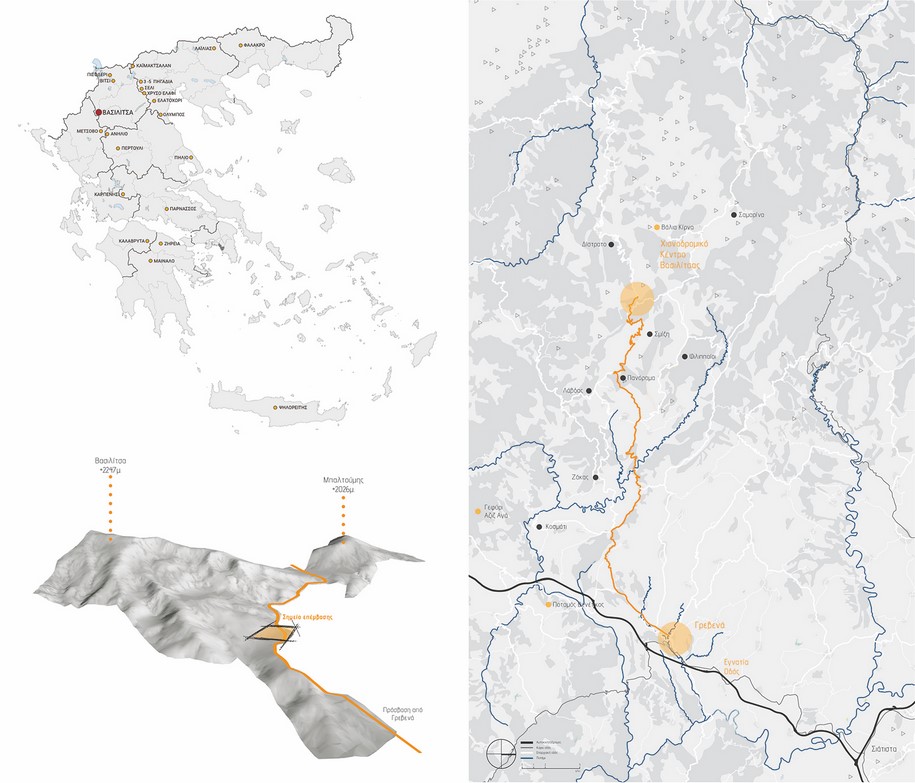 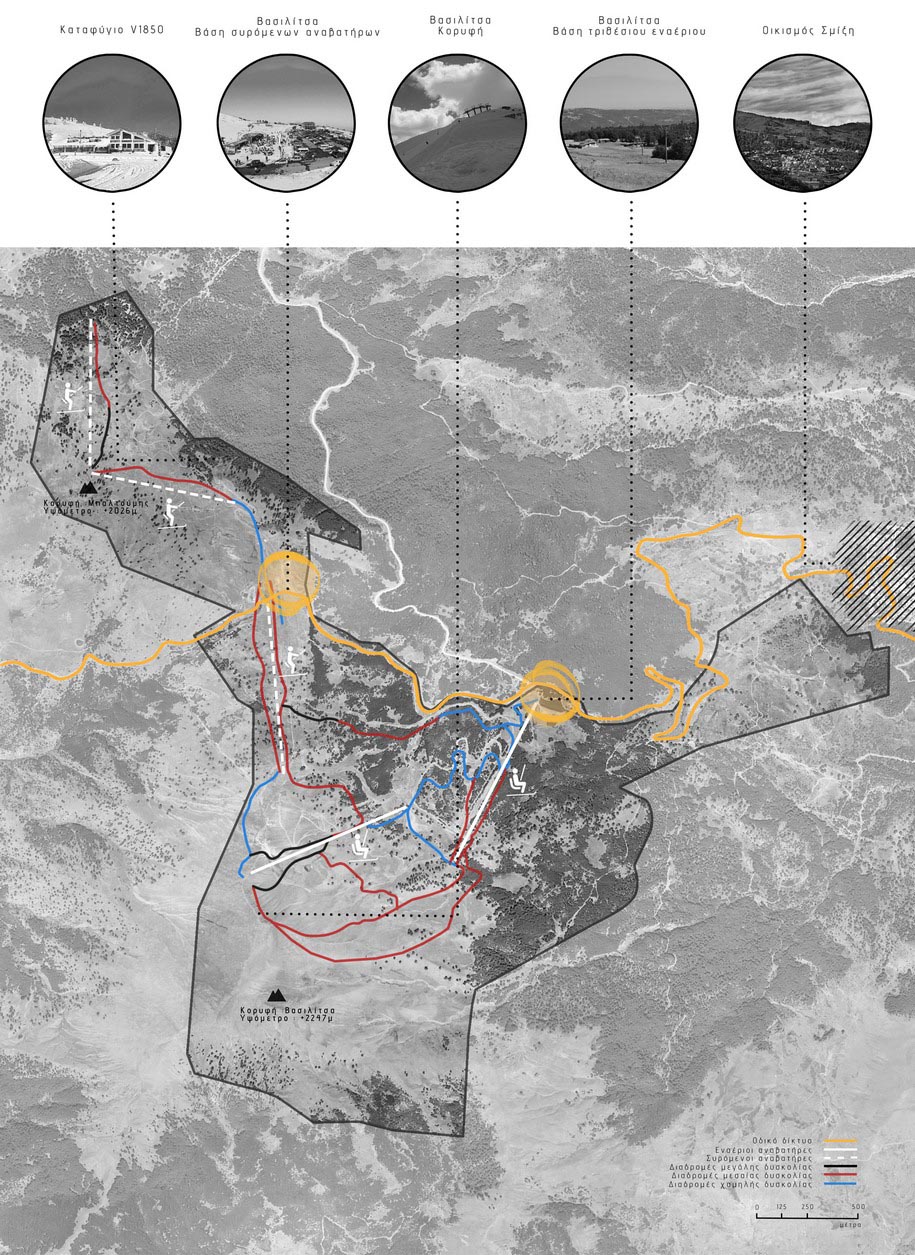 Primary goal of the design process was to converse with the landscape – given that the built environment around the intervention site is already minimal – which immediately creates a challenge for a building which must serve 2000 visitors per day but should simultaneously not compete with its surroundings. 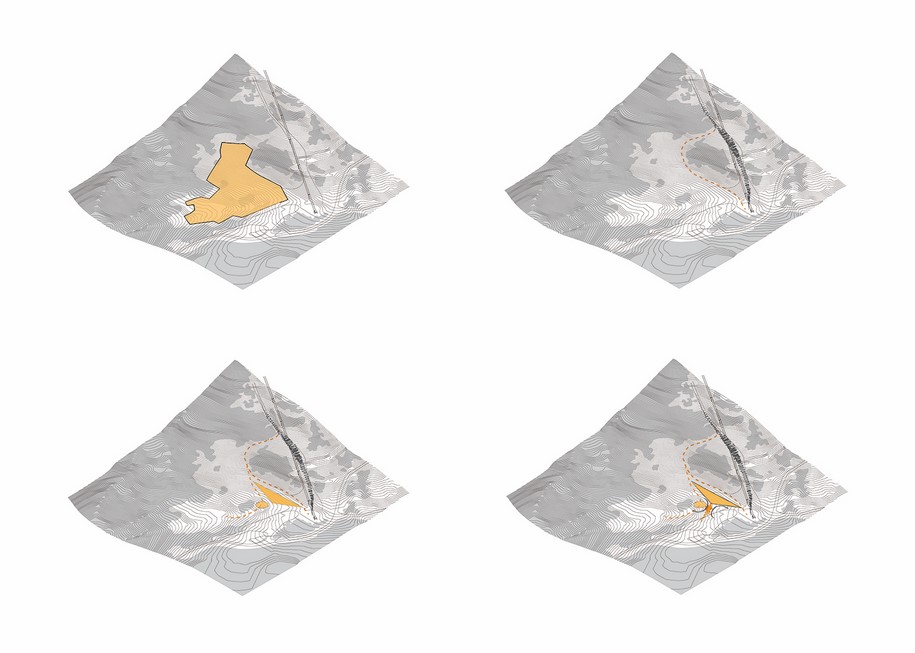 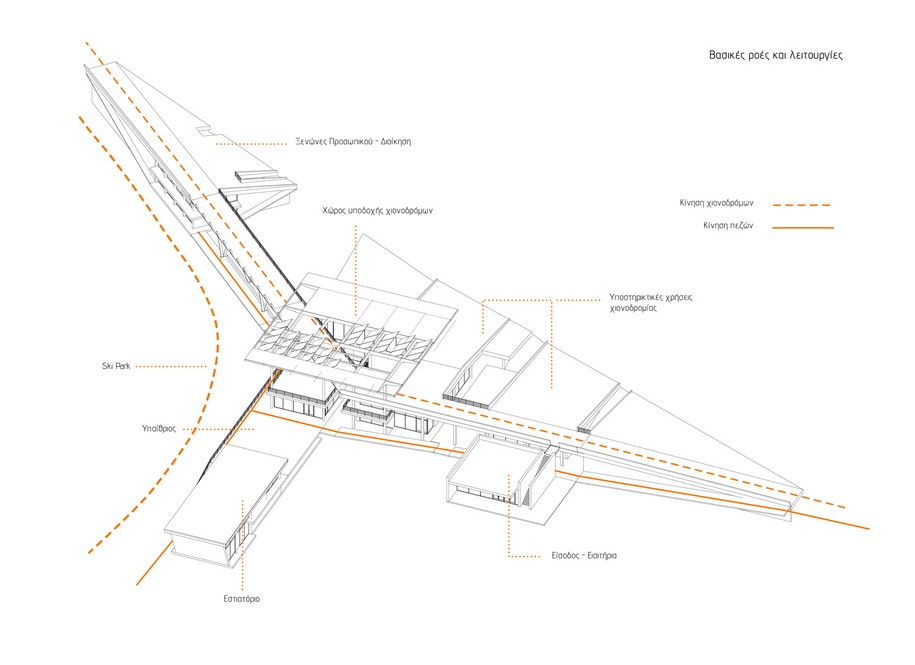 Further developing this principle, it was also attempted to alter the natural terrain as little as possible, introducing an aspect of “economical” design in the project – not strictly in the financial meaning of the term.

For that reason, the natural concavity facing the existing parking space was selected as the intervention site, reducing the need for extended earthwork while enabling a “low-profile” building, blended with the topography. 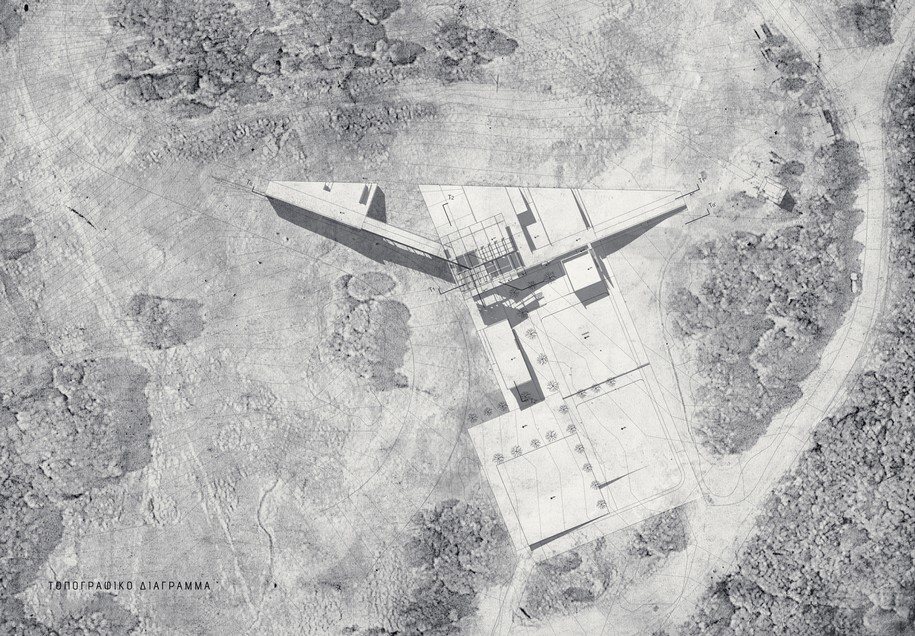 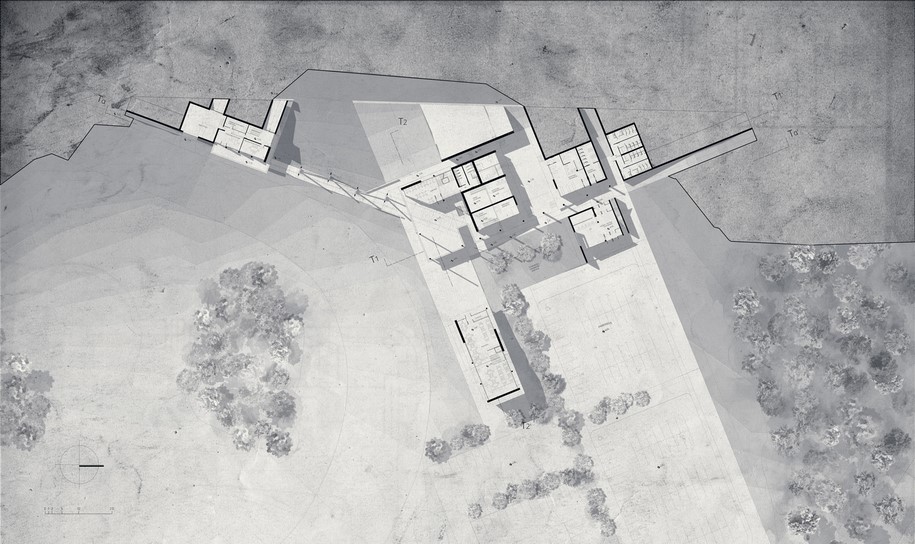 This spot was also selected for its close proximity to all three major points of interest of the site: the existing infrastructure (aerial lift), the parking space (access from the road) and the ski slopes (access from the mountain).

Last but not least, a reinvention of a ski center’s typology was sought, by establishing an “organic” connection between the building and the activity it hosts.

In other words, it was envisioned that the architecture would be part of the skiing experience, and the opposite. 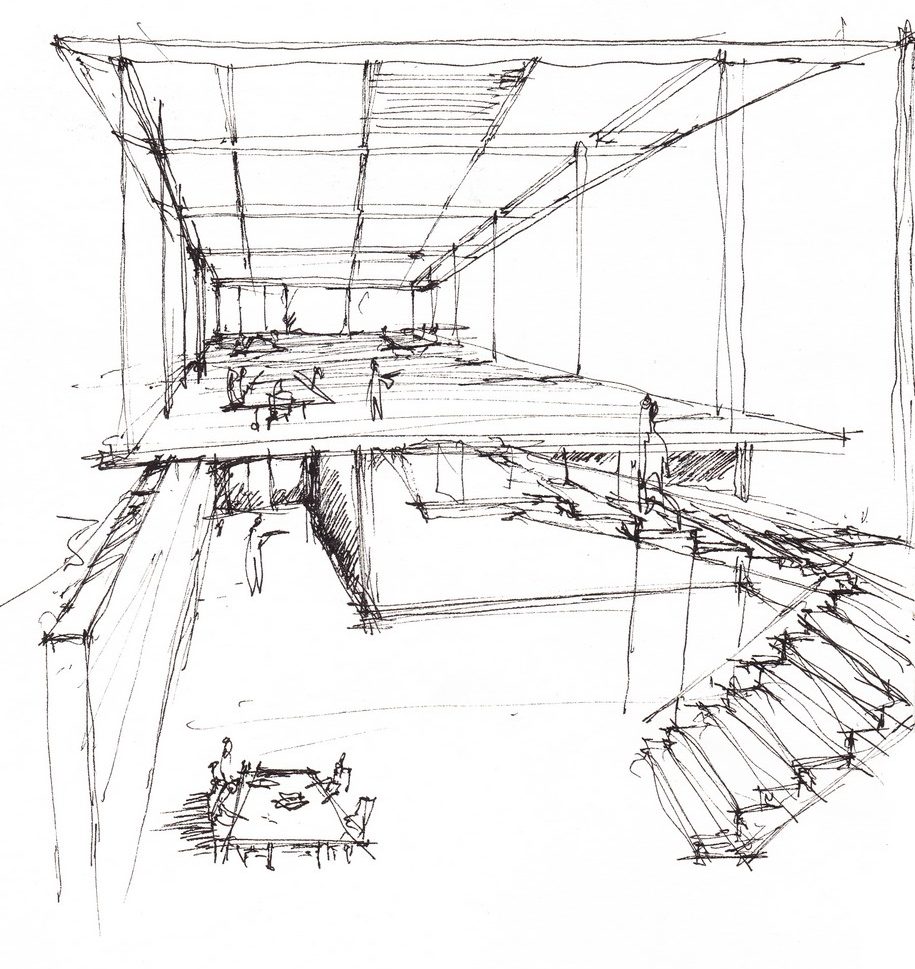 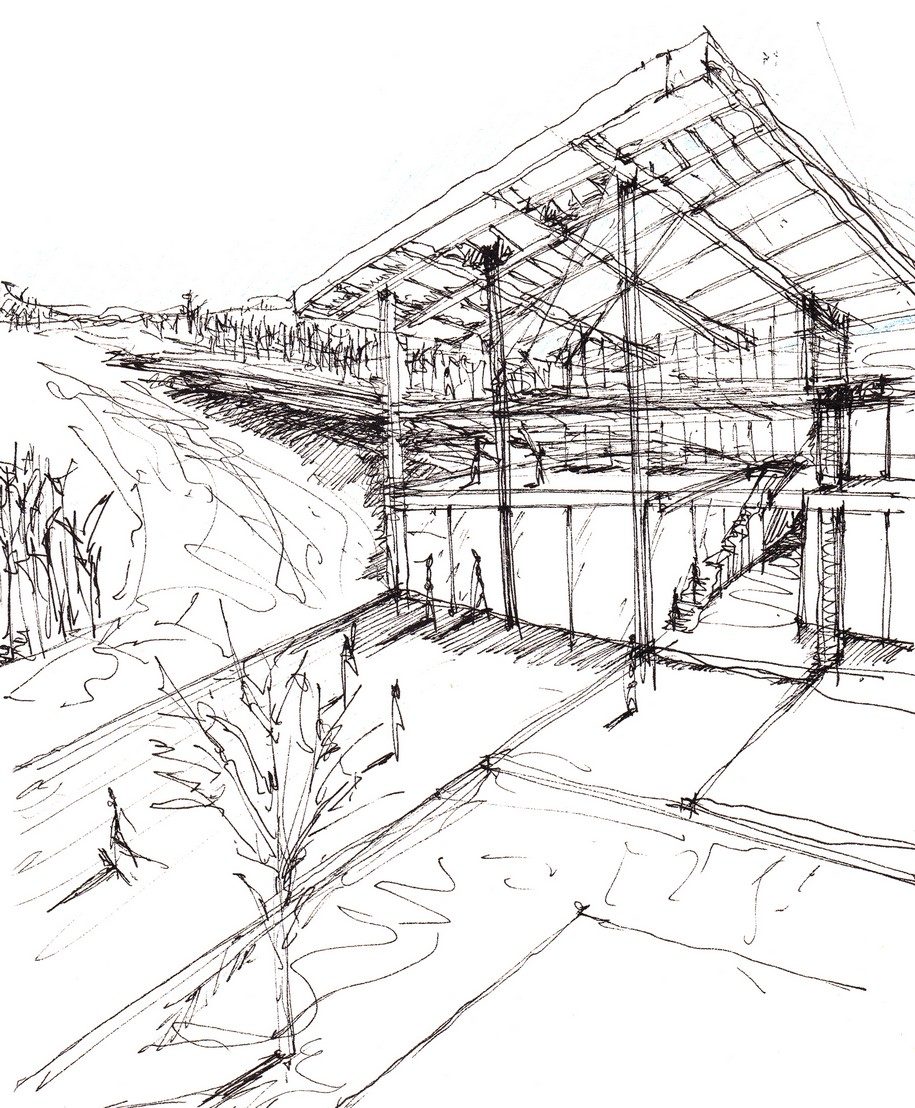 The main architectural element of the project is the oblong wedge, created by deflecting the main skiing route leading to the base of the aerial lift. The wedge tries to blend with the surrounding topography and accommodates most of the center’s special needs underneath, while offering a new alternative ski route to the bottom of the ski center on its top side. 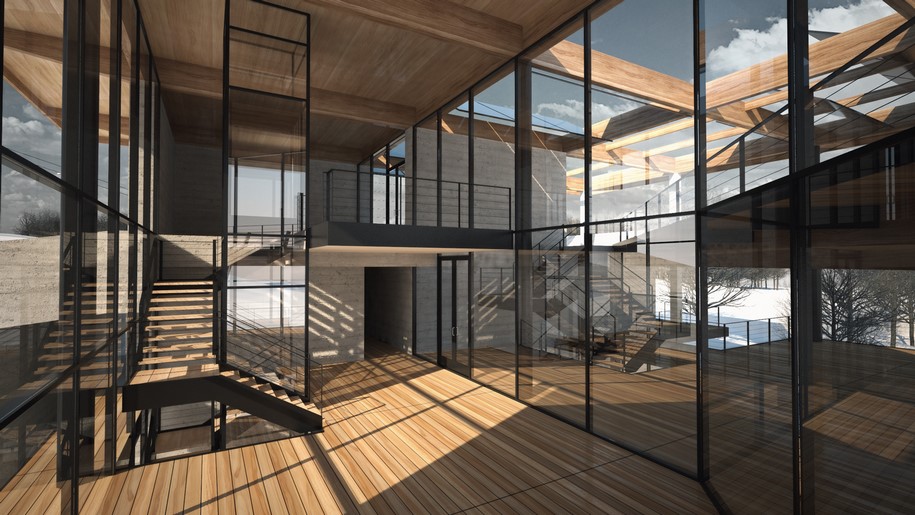 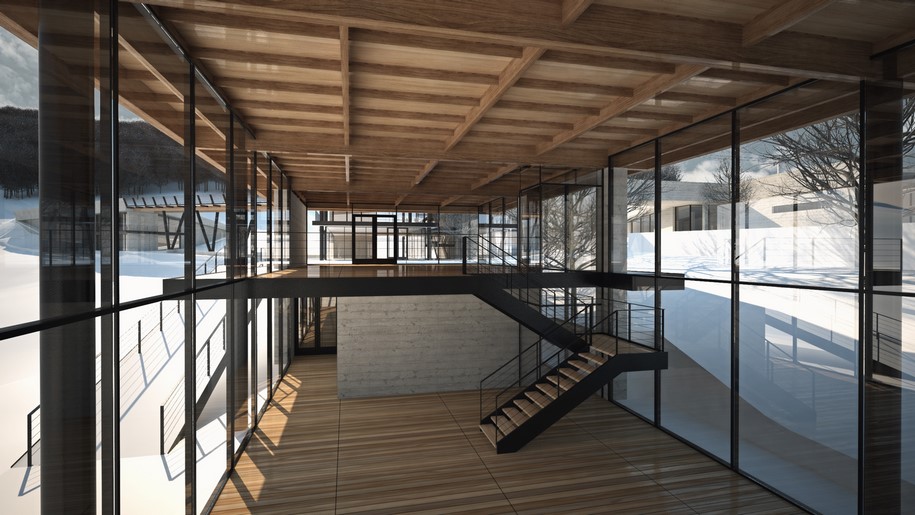 At the center of the deflection lies the heart of the building, the leisure hall and cafe, situated in the spaces under the big rectangular canopy.

This space constitutes a meeting point and a resting place for both skiers and visitors, while at the same time providing unobstructed view of the mountain, as well as the new ski park which is introduced in the curved slope between the building mass and the grove of trees southeast. 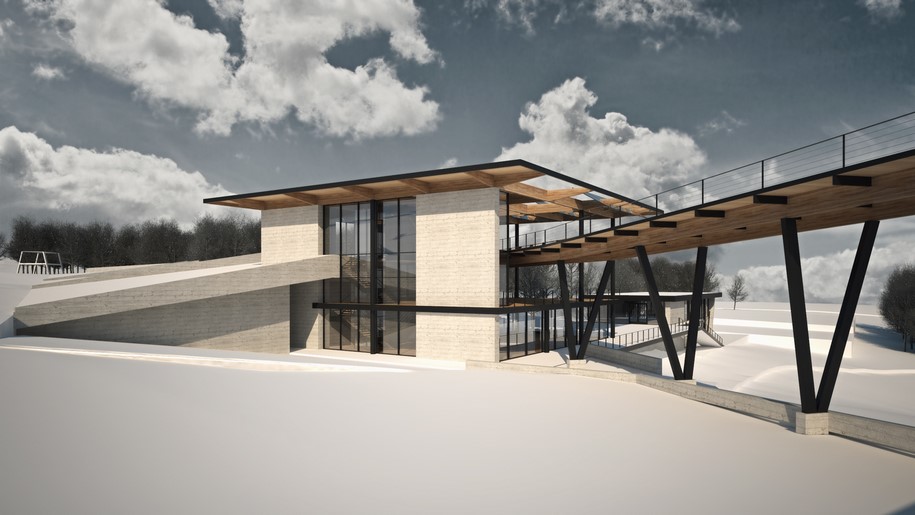 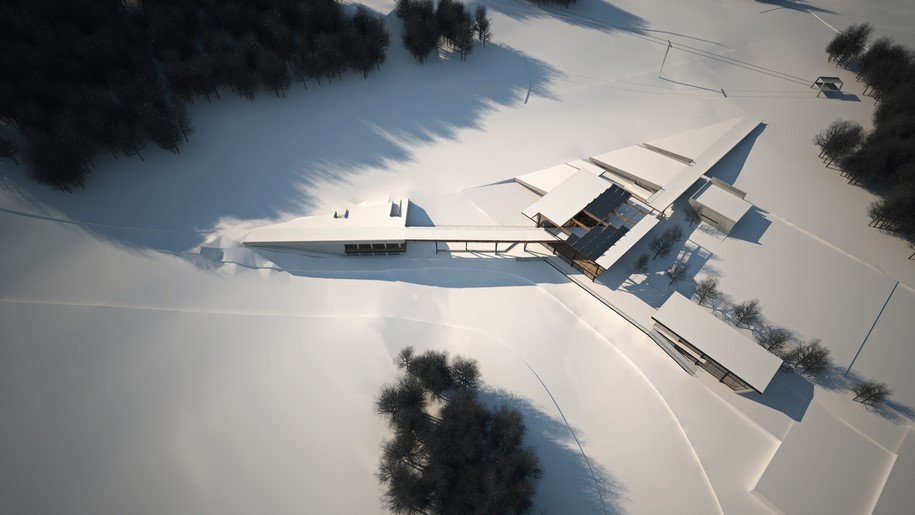 The longitudinal band of the outdoor plaza and the restaurant completes the synthesis, marking the entrance to the complex from the north side, while framing the ski park and the view from the opposite side. 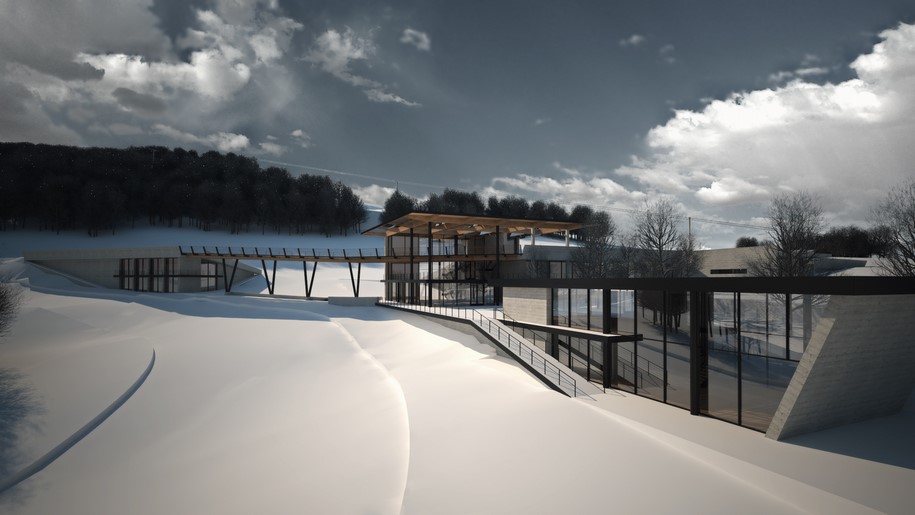 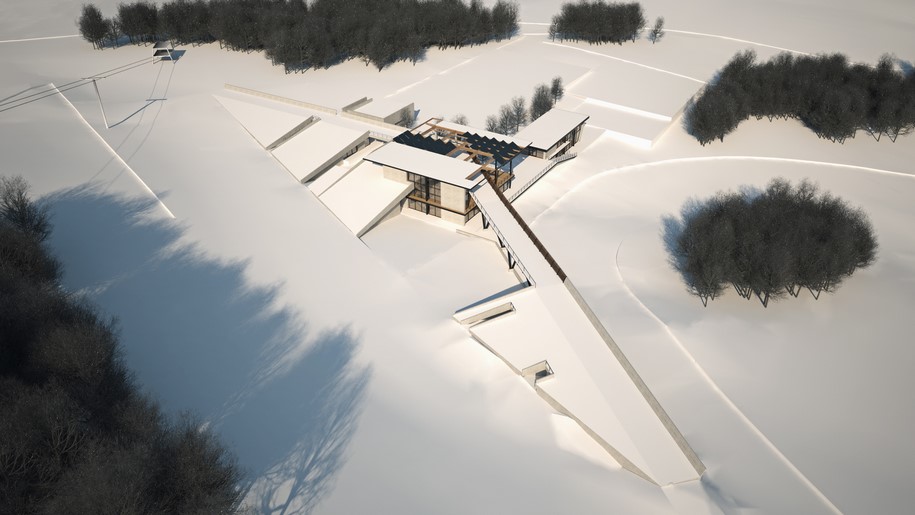 The need for energy sufficiency is addressed in the design process, given the type of project and its location.
Therefore, the wedge’s inclined planes are designed to collect rainwater which is used for various building needs, while the rectangular canopy is equipped with photovoltaic panels with south orientation for maximum solar gain. 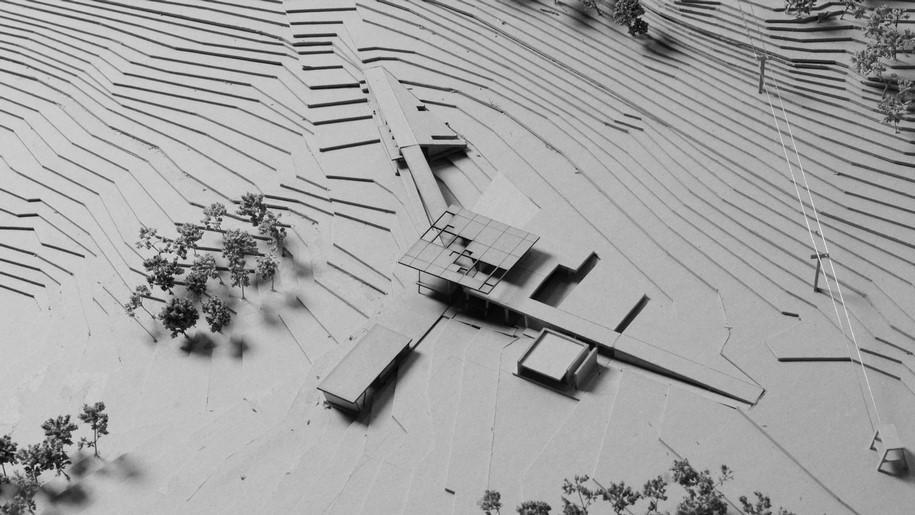 READ ALSO: House of the Infinite is situated at the edge of the Atlantic Ocean / Alberto Campo Baeza
2 COMMENTS

by ELPIDA ROIDOUArchisearchhttps://www.archisearch.gr/wp-content/uploads/JFS_5808-370x700.jpg
SHARE THIS PAGE
WITH YOUR FRIENDS