I AGREE
Archisearch Array
The World of Charles and Ray Eames  – Barbican Art Gallery, London, UK
21 October 2015 – 14 February 2016
Charles and Ray Eames are among the most important designers of the 20th century. Their enduring influence is widely acknowledged and continues to be celebrated worldwide. The World of Charles and Ray Eames is a major new exhibition surveying the careers of Charles (1907-1978) and Ray (1912-1988) Eames and the extraordinary work of the Eames Office: a ‘laboratory’, active for over four decades, where the Eameses and their collaborators and staff produced an array of pioneering and influential work – from architecture, furniture, graphic and product design, to painting, drawing, film, sculpture, photography, multi-media installation and exhibitions, as well as new models for education. The World of Charles and Ray Eames opens at Barbican Art Gallery on 21 October 2015.
Jane Alison, Head of Visual Arts, Barbican , said: Charles and Ray Eames’ creativity, innovation and talent knew no bounds. I am thrilled Barbican Art Gallery is staging the first major UK exhibition in over 15 years about the life and work of this formidable couple. We are delighted to be working with the Eames Office and Eames Foundation whose generosity, dedication and support has been invaluable. It promises to be an unmissable show for all Eames fans and a joyful discovery for everyone.
The work of the Eames Office is characterised for most people by designs for furniture and products, yet their avid interest in addressing the needs of any given problem led them to design and communicate using a wide variety of tools and media. The story of the Eames Office is that of the trajectory of visual and material culture in the post-war period of the last century. Charles and Ray Eames moved fluidly between the mass-production of objects for everyday use and the transmission of ideas through exhibition, film or installation, in anticipation of the global ‘information age’. They were driven by philosophical ideals that favoured knowledge, discovery and discipline; embraced the potential of technology and science for the common good; and saw no separation between life and work.
Eames Demetrios, director of the Eames Office , said: For Charles and Ray, design was not simply a professional skill, it was a life skill—more than that, it was an essential attribute of life itself. And not pretentiously, on the contrary, they never stopped: challenging themselves to make their most iconic designs better and better—all the while having fun. The unprecedented array of objects and stories at the Barbican is not simply for admiration, but inspiration to folks in myriad fields. That`s why the Barbican’s show is so important.
Bringing together over 380 works, the exhibition presents the world of Charles and Ray Eames through objects and projects produced during their lifetime, offering an opportunity to re-examine their work and legacy, and the legacy of post-war modernism. It also features a wealth of documentation and contextual material from the professional archive of the Eames Office as well as artefacts from their personal collections. Charles and Ray Eames collaborated and associated with the leading artistic figures of the 20th century and their immediate circle included Buckminster Fuller, Alexander Girard, Sister Corita Kent, George Nelson, Isamu Noguchi, Eero Saarinen, Saul Steinberg and Billy Wilder. Alongside a rich array of Eames designs, the exhibition includes material which highlights the importance of these relationships to the Eameses’ life, philosophy and working processes.
Structured thematically, the exhibition presents a complex portrait of these internationally celebrated designers in the context of the inner world of their Office and network, alongside the political, cultural and social conditions which enabled and influenced their work. The Eameses’ pioneering ‘multi-media architecture’ and preoccupation with different modes of visual communication, particularly film and photography as tools for modelling ideas, is foregrounded as the most vital and relevant legacy of their oeuvre. These ground-breaking installation projects were developed for both corporate and government clients and aimed to popularise burgeoning computer technologies or present visions of America at home and abroad in the context of the Cold War.
An in-depth look at the Eameses’ pedagogical work and self-initiated projects reveals an enduring interest in learning and creativity and their fascination with diverse cultures, modes of play and rituals. The exhibition also addresses Charles and Ray Eames’ impact on 20th century concepts of modern living: their editorial ‘eye ’ and mastery of form and material yielded some of the most iconic designs of all time, not least their own home – a construction continually celebrated since its completion in 1949. 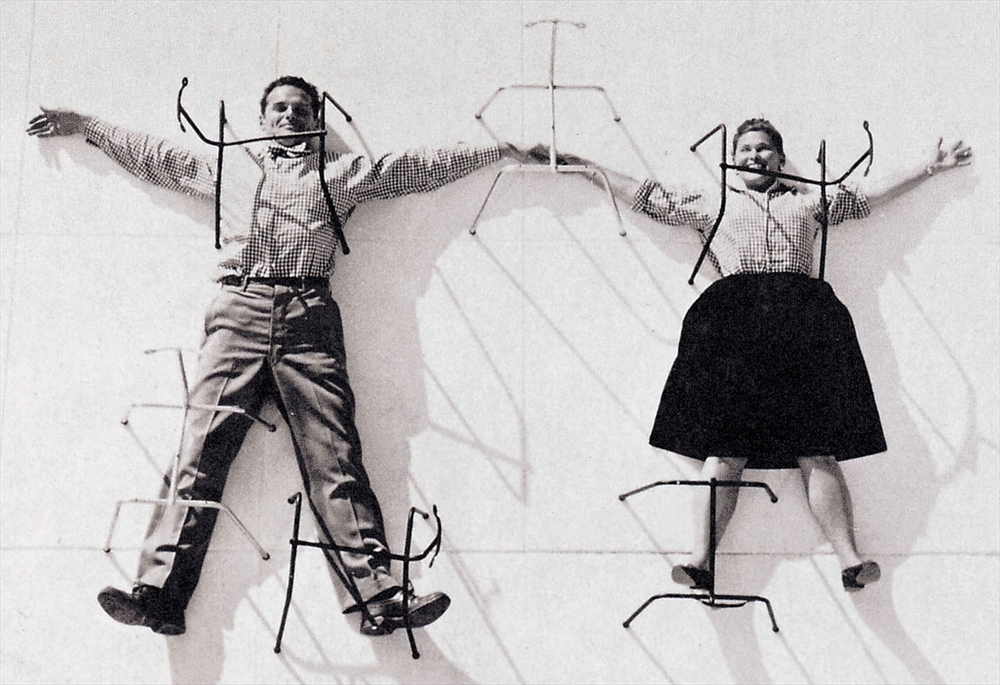