The School of Athens, the Greek Pavilion exhibition at the Biennale Architettura 2018, examines the architecture of the academic commons – from Plato’s Academy to contemporary university designs. Referencing Raphael’s famous fresco, the Pavilion is transformed into a stepped landscape – an open, informal, and common space that will invite visitors to interact with fifty-six 3D-printed models of educational spaces from around the world and different architectural periods, both built and unbuilt. 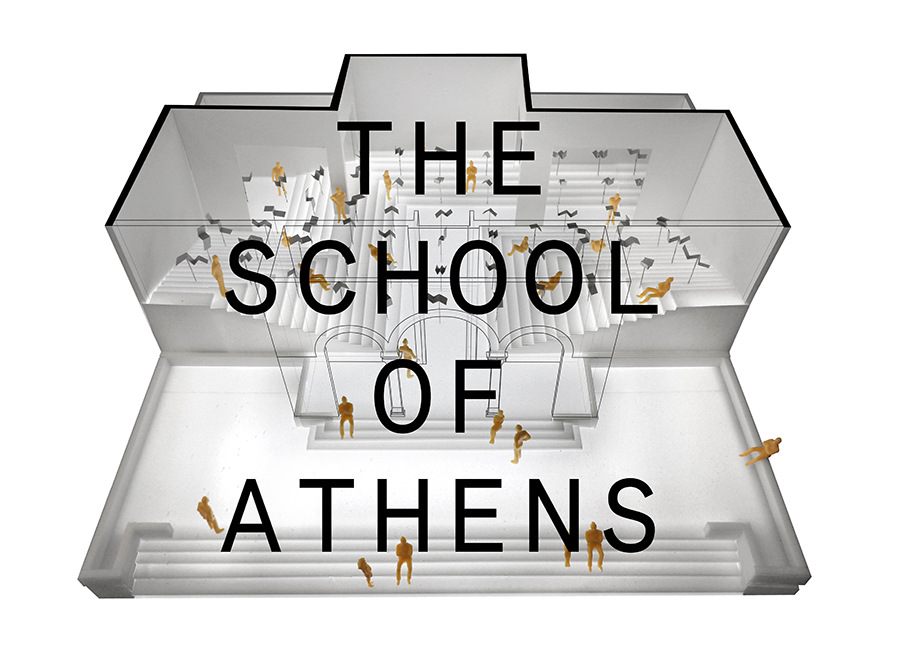 In the exhibition, curators Xristina Argyros and Ryan Neiheiser from the London-based practice Neiheiser Argyros have responded to the theme of “Freespace” set by Yvonne Farrell and Shelly McNamara by treating academic common spaces as architectural specimens — identified, categorised, and made available for analysis and comparison. Mounted on vertical steel bars, these models will be organized in a grid that will fill the pavilion equally in all directions, categorised by time, typology, scale, and spatial strategy.

The models reveal the communal spaces within each university as part of an international student collaboration between the Architectural Association in London and the National Technical University of Athens. Academic institutions included in the exhibition range from Plato’s Academy of Athens, the Carpenter Center by Le Corbusier, the ‘Infinite Corridor’ at MIT in Cambridge, The University of Cambridge courtyards, and the voids of SANAA’s Rolex Learning Centre, among others.

The project recognises that common spaces within the university – unprogrammed spaces for impromptu conversation, casual gossip, heated debate, pop-up lectures, networking, and informal teaching – are vital to the institution’s continued relevance and vibrancy.

By constructing a stepped landscape, the pavilion space will become a 21st-century School of Athens, reinforcing the social and collaborative theme of the exhibition, whilst also enabling individuals to learn and host informal conversations and lectures. The 3D printed models will be displayed across the landscape, inviting visitors to move throughout the pavilion with the guidance of a map and a detailed catalogue, thus transforming them into active participants.

“The School of Athens is an ambition; a utopian vision of a free, open, informal, and common space for learning. It is an in-between space. Neither inside nor outside, not quite a room, but also not simply a space for circulation. Although we typically think of learning taking place in the classroom, educators and architects have recognised for thousands of years that learning also takes place in the space between; in the hallways, on the stairs, at the café, in the quad,” says Ryan Neiheiser, co-curator and co-founder at Neiheiser Argyros.

Xristina Argyros, co-curator and co-founder at Neiheiser Argyros adds: “The ambition is to both look back, and to scan across the current landscape of university architecture, to extract compelling and successful spaces that are free – democratic, unprogrammed, and common.”

As part of the exhibition, a symposium on the history, present, and possible future of the academic commons will take place at the National Pavilion of Greece on Saturday, 26th May 2018. Speakers will include Elizabeth Diller, Marion Weiss & Michael Manfredi, Eva Franch i Gilabert, John Tuomey & Sheila O’Donnell, and Joseph Grima, amongst many others. Following the opening symposium, a series of events will continue throughout the summer – with notable experts from across Greece engaging with leading thinkers from around the world.

The School of Athens is commissioned by The Greek Ministry of Environment and Energy and the Secretary General of Spatial Planning and Urban Environment, Eirini Klampatsea.

Ryan Neiheiser is an architect, urban designer, engineer, teacher, artist, writer, and editor. He received his Masters degree in 2008 from the Princeton University School of Architecture and holds a dual Bachelors degree in Engineering and Art from Swarthmore College. Neiheiser is the co-founding partner of NEIHEISER ARGYROS, a London based architecture practice with projects in Europe and the United States of America. He was an Associate at Diller Scofidio + Renfro and has worked at a number of award winning firms, including the Office for Metropolitan Architecture (OMA) in Rotterdam, Julien de Smedt (JDS) Architects in Brussels, and KieranTimberlake in Philadelphia. He has taught master’s level thesis at Princeton University and has been teaching design studios at the Architectural Association in London since 2014. He is a co-founder of the architecture publication, Another Pamphlet, was a co-editor of the book, Agenda: Can We Sustain Our Ability to Crisis? (Actar, 2010), and has published articles in New Geographies, Bidoun, and Pidgin.

Xristina Argyros is an architect, urban designer, teacher, and writer. She received her Masters degree in the spring of 2013 from the Yale University School of Architecture after earning her Bachelor of Arts and Architecture degree from Princeton University in 2009. Argyros is the co-founding partner of NEIHEISER ARGYROS, a London based architecture practice with projects in Europe and the United States of America. Prior to this, she worked at a number of award winning firms, including the Office for Metropolitan Architecture (OMA) in New York City, Ateliers Jean Nouvel in Paris, and WORKac in New York City. Argyros has taught at Yale University, the Welsh School of Architecture at Cardiff University, and has been teaching a design studio at the Architectural Association in London since 2016. She is a licensed architect in Greece.

Xristina Argyros and Ryan Neiheiser are currently editing a book titled “The School of Athens” which more specifically examines Athens and the possible role academic institutions can have in reinvigorating and reshaping the city.

XOXarchitects win "Architect of the Year" in BOUSSIAS AWARDS

by ARCHISEARCH EDITORIAL TEAMArchisearchhttps://www.archisearch.gr/wp-content/uploads/eka-hellas-%CE%95%CE%B9%CE%BA%CF%8C%CE%BD%CE%B11-1-370x700.png
SHARE THIS PAGE
WITH YOUR FRIENDS