Green Talks is a new series of Podcasts by ECOWEEK, Archisearch.gr and Design Ambassador. This new series of Podcasts co-hosted by Vassilios Bartzokas creator of ARCHISEARCH.GR & the DESIGN AMBASSADOR, and architect Elias Messinas creator of ECOWEEK. The duo interviews leading Architecture and Design personalities who share their experience and how they connect Design, Sustainability and Innovation in their work.

Ulrike Schartner is an architect, graduate of the University of Applied Arts, in Vienna. Ulrike is teaching architecture at TU Vienna, KTH Stockholm, TU Graz, and others. Ulrike is a founding partner of gaupenraub +/- in Vienna, which she founded with architect Alexander Hagner. Ulrike is also a founding partner in omniplan AB, which deals with architecture and project management in Stockholm, Sweden with Staffan Schartner and Pelle Norberg.

The architecture firm gaupenraub +/- was founded in 1999 and was selected in the first season of Young Viennese Architects (YoVA1). The firm works in different areas and scales. Its broad field of work ranges from construction to urban planning to furniture and product design. Gaupenraub +/- became known from its involvement in projects for disadvantaged people, and was recipient of the 2020 City of Vienna Award for Architecture.

Ulrike Schartner was a speaker at ECOWEEK in 2020 and 2021, and is a co-author of the second ECOWEEK book ’15 Ways to Sustainability: from Innovation to Social Design’ which will be published this year.

The conversation with Ulrike Schartner started with talking about her own story, how she randomly entered the world of architecture and specifically how she with social architecture inspired by a priest’s speech.
In Mr Elias Messinas question about the way that her office copes with small budget, yet demanding projects with high needs, Ulrike highlighted the collaboration with a network of people as the most important source of help. Associations who deal with homeless people, local builders and previous clients are called to contribute to the projects in any way they can.

To follow a more sustainable architecture and way of building, the office mines the leftovers of other buildings, construction sites e.t.c. The team collects and uses things that other people want to get rid of, supporting circular economy and ecological thinking.

The conversation led to the conclusion that a new profession is rising nowadays. People that will operate this urban mining for materials, in order to minimise waste, as an answer to the climate and economical crisis. 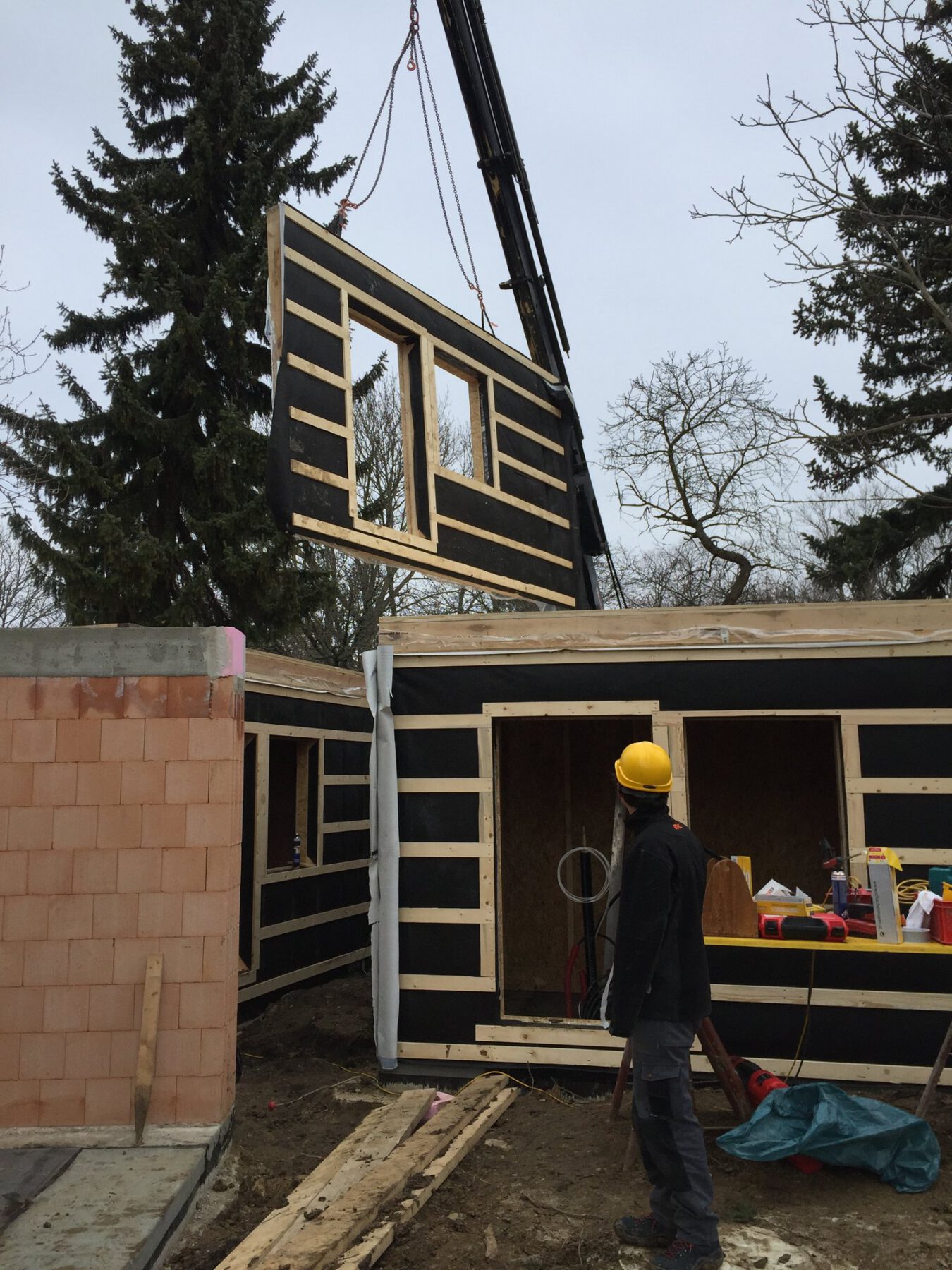 Next question was about the combination of this material harvesting with design, construction techniques and rehabilitation practices and how an architect orchestrates the whole process. At this point of the conversation well known projects of the office were referred such as VinziRast ashore which is about the rehabilitation of homeless people through agriculture activities.

We found out that many homeless people of the city are coming from the countryside searching for the a better life, but then they find out that city can’t feed them, so they want to go back, but there is nothing to do there.

Ulrike Schartner stated and continued by describing the project’s process. The team was looking for a farm building and they got a big a donation from an empty building that used to be a hotel. The project was about transforming the place and embedded programs like housing for homeless people, hostel for guests e.t.c. The garden is going to be used for agriculture activities in order to give the opportunity to the inhabitants to gain their own money. In this way a symbiotic way of living is created and promoted.

Nowadays there is a different perception of what an architect should be, according to the focus of the time, different types of questions that we have to answer. We have to be careful with out resources and power people to do thing on their own, even not built at all..we have to focus on the buildings we already have and use them in very different ways.

Vassilios Bartzokas then, asked Ulrike for her advice to young professionals that want to serve society and follow a more sustainable path while practising architecture. She responded by underlining the importance of young architects to get in touch with every aspect of the profession in real life, such as craftsmanship, real plans and construction, economical aspects of a project and political reality. She recommended everyone to come out of their comfort zone, travel to another country, and participate to the building of a real project for other people.

Listen to the whole episode with Ulrike Schartner here

by ARCHISEARCH EDITORIAL TEAMArchisearchhttps://www.archisearch.gr/wp-content/uploads/katerina_novakova_ecoweek-cover-1-370x700.jpg
SHARE THIS PAGE
WITH YOUR FRIENDS